Tom Friedman is worried, as am I, that Bernie, though he clearly has momentum among Democrats and the approbation of the young and the “progressives,” won’t fare well against Trump. I’m hoping he will, but I have my worries. Here’s Friedman’s piece in today’s NYT:

So who is the right Democratic candidate? Well, for starters I will tell you who it is not. It is not Bernie Sanders. On which planet in the Milky Way galaxy is an avowed “socialist” — who wants to take away the private health care coverage of some 150 million Americans and replace it with a gigantic, untested Medicare-for-All program, which he’d also extend to illegal immigrants — going to defeat the Trump machine this year? It will cast Sanders as Che Guevara — and it won’t even be that hard.

Yes, the failures of American capitalism to deliver inclusive growth, which have propelled the Sanders campaign and animated his followers, require urgent attention by our next president. But Sanders, in key cases, has the wrong solutions to the right problems. He’s the wrong candidate to take down Trump.

Please, Democrats, don’t tell me you need Sanders’s big, ill-thought-through, revolutionary grand schemes to get inspired and mobilized for this election. You want a revolution? I’ll give you a revolution: four more years of Donald Trump, unencumbered by the need to get re-elected. That will be a revolution! And it will do permanent damage to the institutions and norms that have sustained this country since its founding, not to mention our environment, which Trump has been selling off to oil, gas and mining companies at an alarming pace.

You can tell from the piece’s title who Friedman favors:

On strategy, we know the formula that works, because it already has: Appeal to independents, moderate Republicans and suburban women. These are the constituencies that did not like Hillary Clinton and were ready to give Trump a chance in 2016 — but abandoned him in 2018 and delivered the House of Representatives to the Democrats, and then also two governorships in red states.

If Democrats can choose a candidate who can hold the core Democratic base and also appeal to these same independents, moderate Republicans and suburban women in the key swing states, they can absolutely defeat Trump.

. . .But there is one candidate on the Democratic side who not only has a track record of supporting all those issues but also has the resources to build a machine big enough to take on the Trump machine.

This candidate also has the toughness to take on Trump, because while Trump was pretending to be a C.E.O. on the show “The Apprentice,” this candidate was actually building one of the most admired global companies as a real C.E.O.

Yes, Sanders is also polling well against Trump, but the Trump machine has not begun to focus on him yet — it hasn’t begun bombing Facebook with ads about how Sanders honeymooned in the Soviet Union.

Well I wish that Bloomberg would either get into the damn race now (we do have lots of his ads on television in Chicago), or throw his weight (and bucks) behind some other candidates. Everyone decries Bloomberg because he’s rich (so is Bernie, though much less so), but wealth isn’t always a handicap, and of course is a big plus in a Presidential election. Yes, Bloomberg isn’t perfect, but neither is Sanders. What we want is someone who can get rid of Trump.

At any rate, more of my worries about The Bern come from a brand-new Gallup poll (h/t: Ginger K) showing that of all characteristics of candidates, the worst—to the American electorate—are being either a socialist or an atheist. Bernie is both, for while he professes to be Jewish, we all know that he’s not religious. Further, he’s construed as a “socialist” to most Americans, even though a form of “democratic socialism” is really what most European countries have. But tell that to Americans, who, if The Bern continues as front-runner, will be bombarded with Trump ads painting him as Lenin reincarnated.

Here are the data from Gallup. As the website notes:

These findings are based on a Gallup question asking, “Between now and the 2020 political conventions, there will be discussion about the qualifications of presidential candidates — their education, age, religion, race and so on. If your party nominated a generally well-qualified person for president who happened to be [characteristic], would you vote for that person?”

. . . Democrats express at least somewhat more willingness than Republicans to support most of the candidate types tested, with the widest gaps seen for Muslims, atheists and socialists. While at least two in three Democrats say they would vote for presidential candidates with these profiles, support among Republicans drops to just over 40% for Muslims and atheists, and to only 17% for socialists. 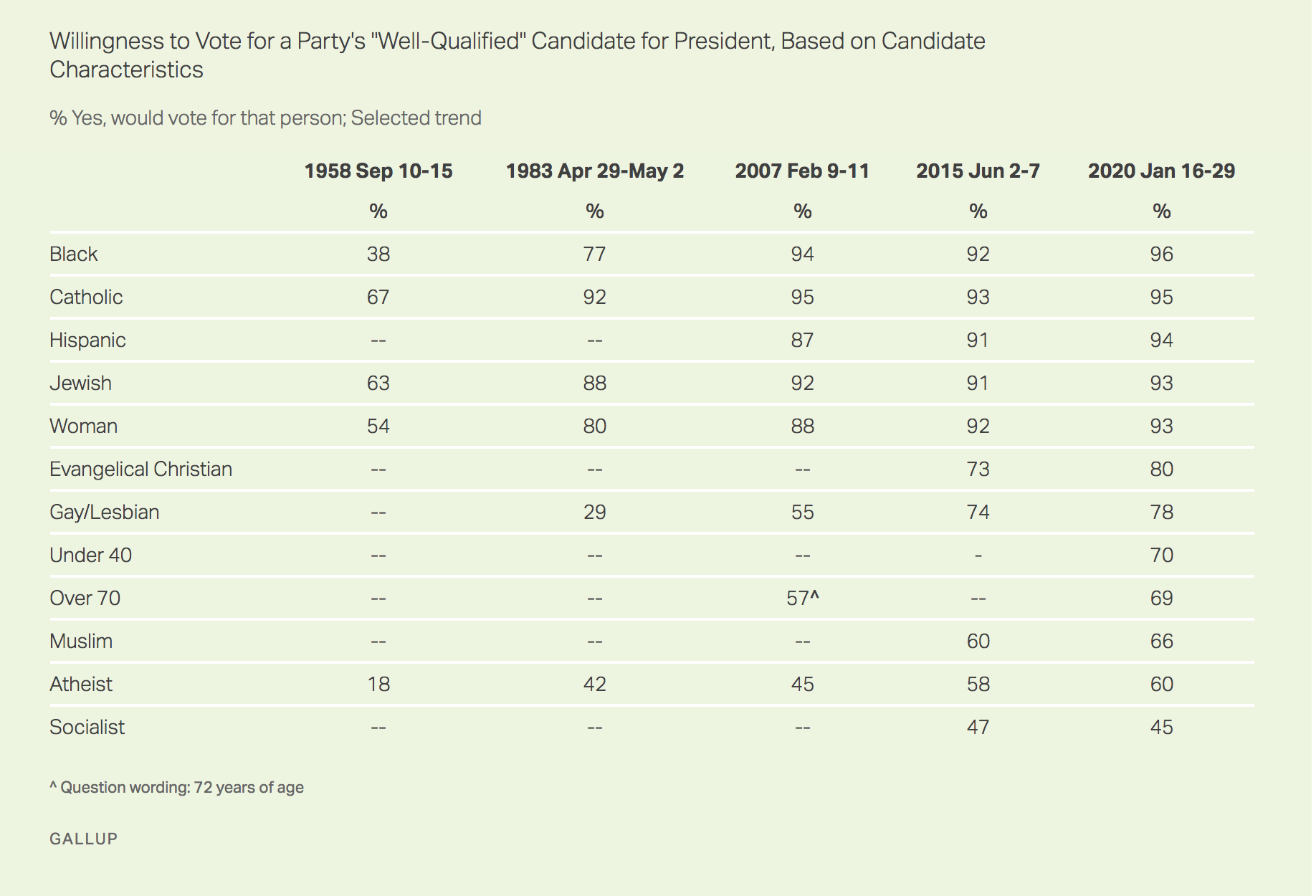 The data broken down by party. We can’t survive if a third to a quarter of all Democrats won’t vote for an “atheist” or a “socialist”. And what if the candidate were both? 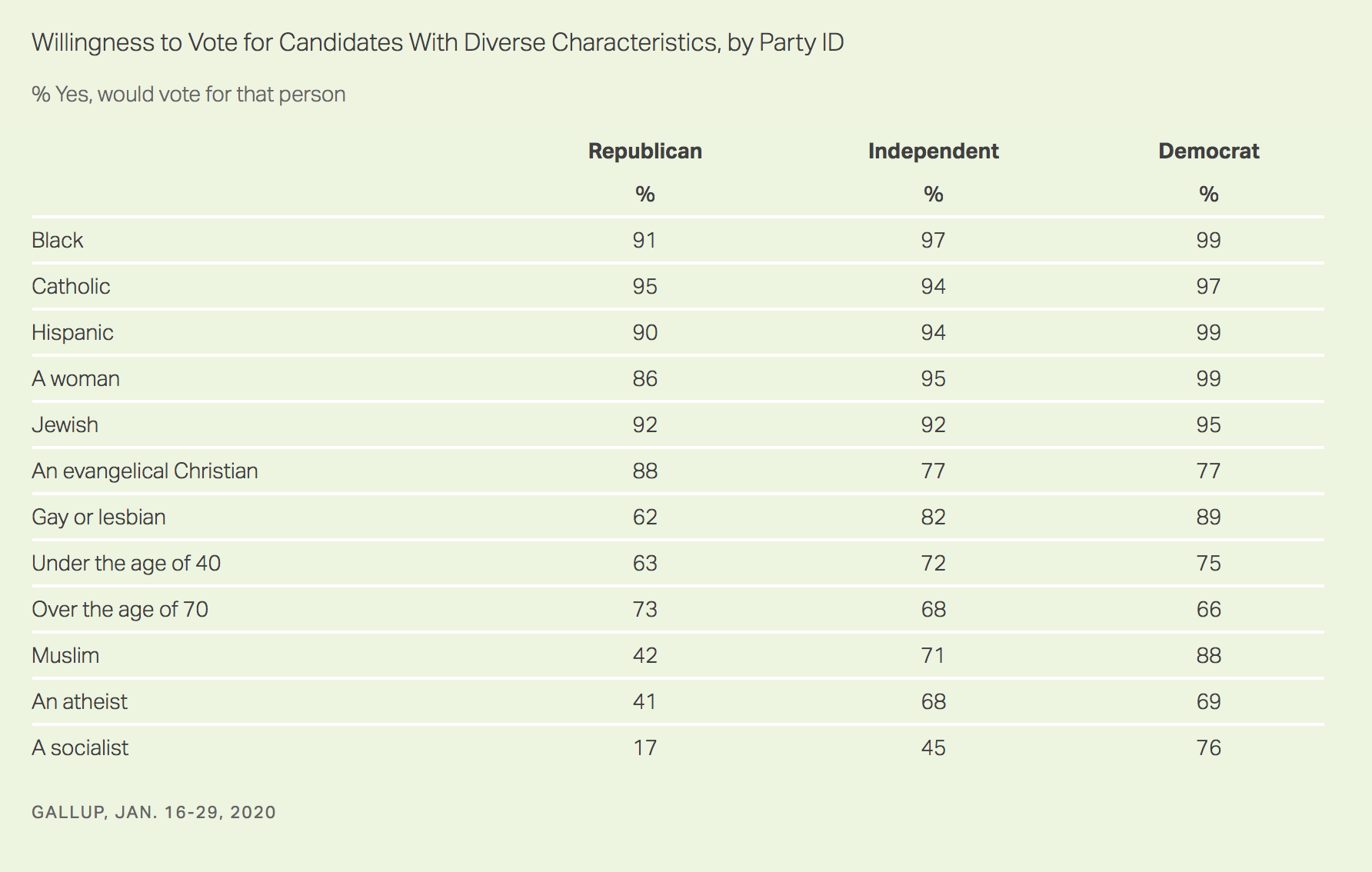 159 thoughts on “More on the Presidential race: Friedman on Bernie, and a new poll showing that socialists and atheists are despised by American voters”