Reader Daniel sent me a link to a dreadful anti-antheist article from, of all places, the New Humanist, and I, like he, was horrified. It’s nothing less than a distorted attack on New Atheism, especially the “Four Horsemen” (Dennett, Dawkins, Harris, and Hitchens), as well as on the conversation they had on YouTube (here and here) which has been turned into a book. This New Humanist screed is so appallingly bad that it might have been “ripped from the pages of Salon.”

I asked Daniel who published the New Humanist, and he responded this way:

The Rationalist Association, formed in 1885; the magazine is also that old. So it has a good pedigree—indeed, the Rationalist Association’s presidents have included Bertrand Russell and the late Jonathan Miller. Past contributors to the magazine have included David Aaronovitch, Peter Atkins, and all of the ‘four horsemen’ except Hitchens (though he was interviewed by it once)! And honorary associates of the Association include Aaronovitch, Richard Dawkins, A.C. Grayling, and Philip Pullman. So it’s a fairly serious and eminent publication in the freethinking world. Not that all freethinkers have to sign up to ‘new atheism’, of course—but one would think that such a respected magazine would publish half-decent rather than half-baked arguments against Dawkins et al.

Indeed. But read and weep (click on screenshot). You can already see one criticism in the title: that the New Atheists are “religious” in their passion and ardor. (Note to Tiso: passion is not the same as faith.) 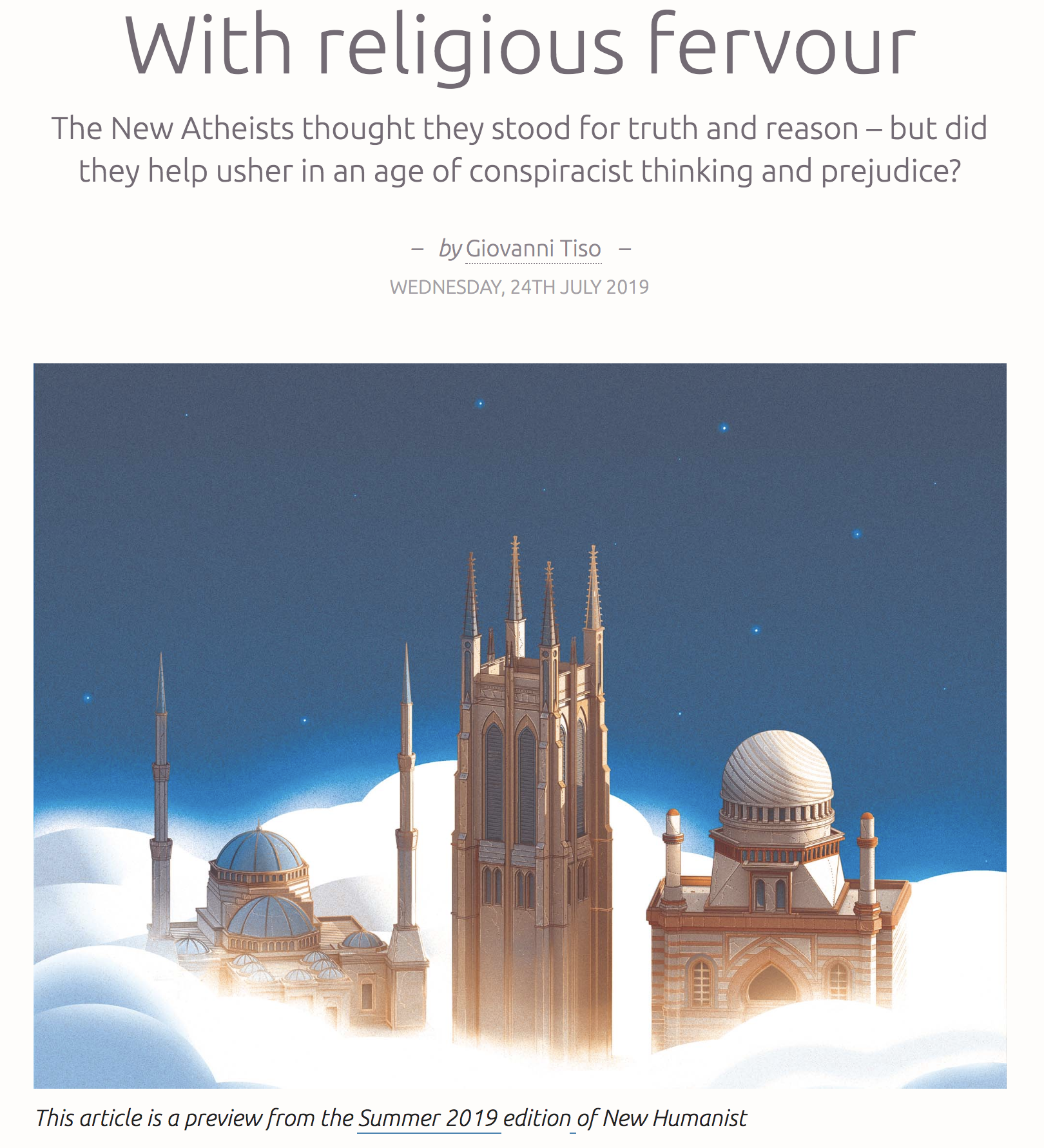 I didn’t know of Giovanni Tiso, but he’s identified here as “an Italian writer and translator based in Wellington. He’s a featured writer at Overland, blogs at Bat, Bean, Beam and tweets at @gtiso.”  He hasn’t appeared on this website before.

What are his claims? Besides asserting that the New Atheism  was a “flawed intellectual project” (it wasn’t a project but a reflection of the Zeitgeist), he says it failed (has he seen the statistics on the rise of “nones”?), and that it failed because it attacked “strawmen,” “largely imaginary opponent(s)”. The latter isn’t true, either, as there are many religionists of all stripes—not just fundamentalists—who do damage to our societies.  And there are many New Atheists besides Dennett, Dawkins, Harris and Hitchens.  But I’m getting ahead of myself. I’ll just summarize Tiso’s accusations:

1). New Atheists are spiteful and shrill and “laugh people out of their faith” by mocking them. This is not always the case, and if you read the four books that started the “movement”, you will find far less mockery than judicious examination and critique of faith. But yes, sometimes mockery is on tap given the bizarre behavior and arguments of believers, just as mockery is sometimes on tap with respect to creationists (who, by the way, are all religionists).

2.) New Atheism is a form of Western cultural supremacy, designed to buttress imperialism. I kid you not; here’s a quote:

Now, as we survey what’s left of the movement from its smouldering ruins, we may wonder what the fuss was about, and how these authors managed to build such formidable straw men of religion and human history on their way to selling millions of books. But New Atheism was never about faith nor, indeed, atheism. It was about asserting the supremacy of Western culture in spite of the enduring place of religion in Western institutions and societies, for the purpose of giving renewed justification to Western imperialism. It doesn’t matter that three of the four horsemen were initially opposed to the war in Iraq, for theirs was always primarily a war against Islam itself.

Do I really need to point out that criticizing Islam—and yes, it was the rise of militant Islam that prompted the writing of the first New Atheist book, by Sam Harris—is NOT the same as “justifying Western imperialism”. I don’t have to say more here; Tiso’s claim discredits itself.

3.) New Atheism neglects the palpable benefits of religion. These include ethics morality, and charity.  In fact, New Atheists have not neglected these benefits; they just claim that, by embracing secular humanism, we can have the same benefits without the many downsides of religion, which  include oppression of women, gays, and opponents; a fatuous and restrictive “morality” that’s largely about sex; fostering violence and divisiveness; torturing children’s minds, and so on.

4.) Dawkins made mean tweets. Yes, that’s right. Dawkins hasn’t always been adept on Twitter, but that doesn’t mean that New Atheism is in “smouldering ruins”. This is another Salon-like red herring that doesn’t address the substantive arguments of New Atheism against religion.

5.) New Atheism’s arguments against religion, so far as they go, are not only mean but incoherent. Here’s one example from the essay, in which Tiso goes after Sam Harris:

A rhetorical woman appears in The Four Horsemen, too. In his essay, Harris asks us to imagine that on this day a set of identical twin girls was born with microcephaly in Brazil due to their gestating mother having been bitten by a mosquito carrying the Zika virus.

Imagine the woman herself a few months ago, doing everything within her power to prepare a happy life for her unborn daughters. Where does she work? A factory. How often does she pray? Daily, no doubt. But at the crucial moment she sleeps. Perhaps she’s dreaming of a world better than the one we live in. Picture a lone mosquito finding her open window. Picture it alighting upon her exposed arm. Will an omnipotent, omniscient and wholly benevolent God muster the slightest defence? Not even a breeze. The mosquito’s proboscis pierces her skin immediately. What are the faithful to believe at this point? One suspects they know that their God isn’t nearly as attentive as he would be if he actually existed.

I find this vignette quite upsetting. What are we to make of it? Does the existence of the mosquito and the fact that it’s prepared to bite a member of the flock prove that this woman’s God doesn’t exist? Is the fact that the woman works in a factory implicated in her faith? Is she unwittingly but nonetheless ultimately co-responsible for her own misfortune, by wasting her time in prayer instead of promoting scientific and medical discoveries?

It’s not hard to make out what Sam is saying here: he’s raising the classic argument about what kind of god would create “physical evil”—the torture and/or death of innocent people by natural circumstances. If god is ominipotent, he could prevent such evil, and if he’s omnibenevolent, he would have. There is no convincing religious answer, at least in the Abrahamic faiths, to the existence of this kind of evil, though many theologians have tried. How could Tiso have missed this simple lesson?

It goes on, but you won’t find anything in the piece that you haven’t seen in Salon or in the many other pieces trying to denigrate New Atheism. Tiso even manages to drag in “Elevatorgate”!

Why did the New Humanist, which as Daniel said is a respectable magazine, publish such tripe? Your guess is as good as mine. If you’re a member of The Rationalist Association, and object to this scattershot and ill-informed attack of New Atheism, you might let them know.

41 thoughts on “The New Humanist goes after the New Atheists”