The new Jesus and Mo strip, called “source,” came with an email note, “Let us thank God for giving us all of those Perfect Words. Where would we be without them?”. And on the strip the author writes, “Yeah well, you know, that’s just like your opinion, man.” 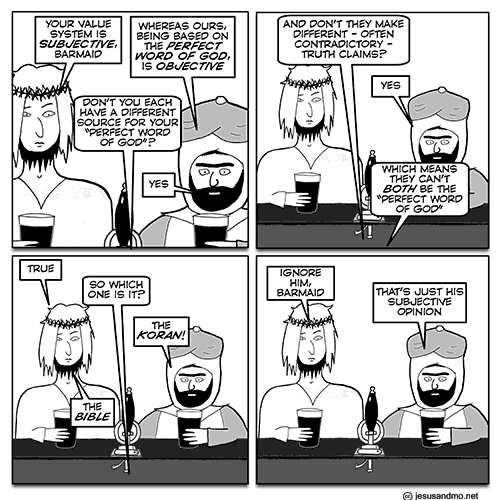 Apropos, right now I’m in a Facebook tussle (I nearly always avoid social-media fights) with some guys who claim that religion is just as reliable a way of ascertaining truth as is science.

Commenter 1: “Jerry Coyne Conflict on metaphysical facts no more discredits religion than such conflict historically discredits science. In both cases one has to examine the claims in the light of alleged supportive evidence. Just as in science, some religious explanations fare better evidentlialy [sp.] than some others.”

Commenter 2, a believer, then chimes in: “Jerry Coyne Dying and finding out is not a good option. The question is did Jesus (whoever he was) rise from the dead or molder in the grave like John Brown’s body? Did any of his followers break ranks like Mitt Romney, or did they remain witnesses until they were martyred for their faith? There may be eternal consequences for guessing wrong. Or maybe not. Why roll the dice? I believe in science but it doesn’t promise me a thing.”

And my response to him:

I’m done now. except I sent the second commenter this Jesus and Mo strip. It’s useless to squabble about this stuff, especially on Facebook or Twitter. But like Maru, when I see a box, I must enter. It’s the laws of physics, Jake.