On the recommendation of my friends’ friend, we drove to Brookline yesterday for a deli lunch at Zaftigs Delicatessen. (“Zaftig” means “plump or buxom” in Yiddish, but might also be the owners’ family name.) A secondary goal was to procure bagels at Kupels Bakery, a Jewish bakery just two blocks away.  Kupels is said by my friend Tim to purvey the best bagels in Boston. Perhaps he was right, but the bagels were, as is true with nearly all American bagels, too soft and puffy. (Brookline, a separate city abutting Boston, is the local mecca for Jewish culture.)

Here are my friends Tim and Betsy in front of Zaftigs. They are my oldest friends:  I’ve known them since 1967, when Tim lived on the hall of my dorm at William and Mary, and 1969, when Betsy transferred to William and Mary from Salem College. They got married (in Williamsburg) in 1972, and I’ve seen them at least once a year since. (From 1973 to 1976 we lived together in a basement apartment on Beacon Street in Boston.) More than five decades of friendship! 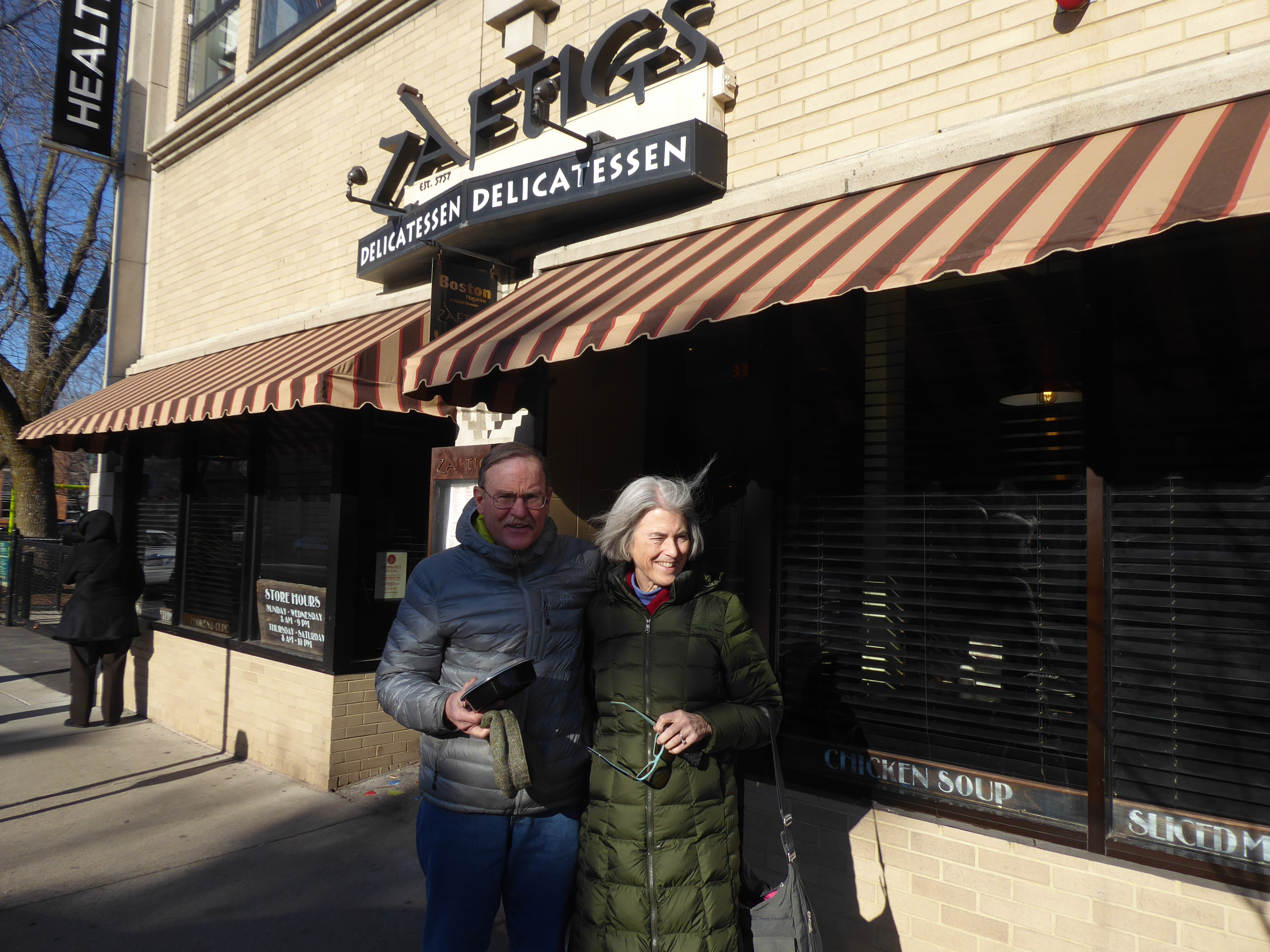 The inside of Zaftigs, which looks like a deli: 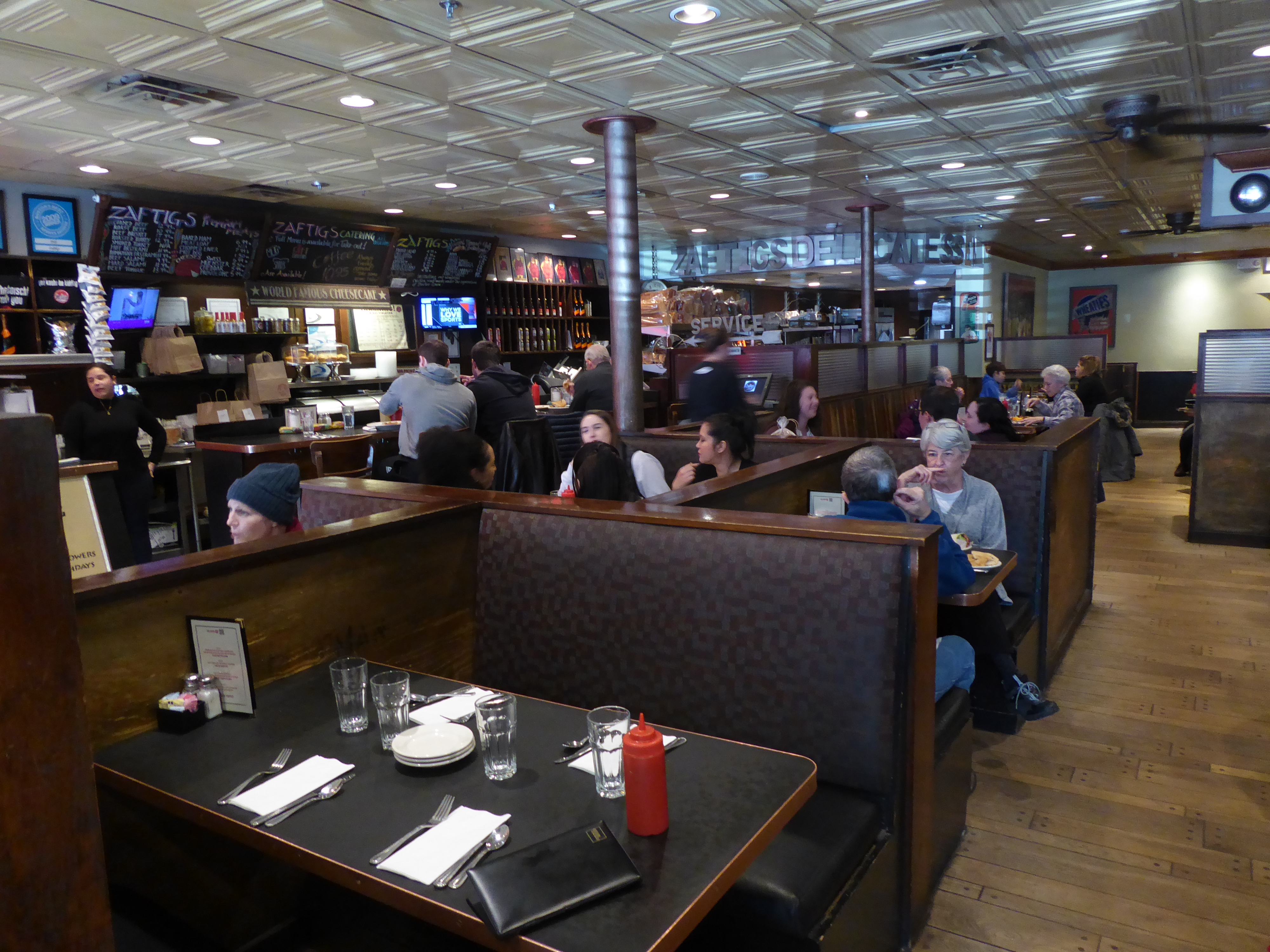 You can see the menu here. (The “loaded latkes” are an unfortunate nod to goyishe tastes.)

My lunch was the biggest sandwich they had: the “New Yorker,” with 12 oz. of corned beef, pastrami, cheese, and Russian dressing on cissel bread (the bread was too insubstantial to encase the meat), served with potato salad as well as dill and half-sour pickles and pickled green tomato on the side. I washed it down, of course, with Dr. Brown’s Cel-Ray tonic, a celery-flavored soda that is the perfect accompaniment to corned beef or pastrami. 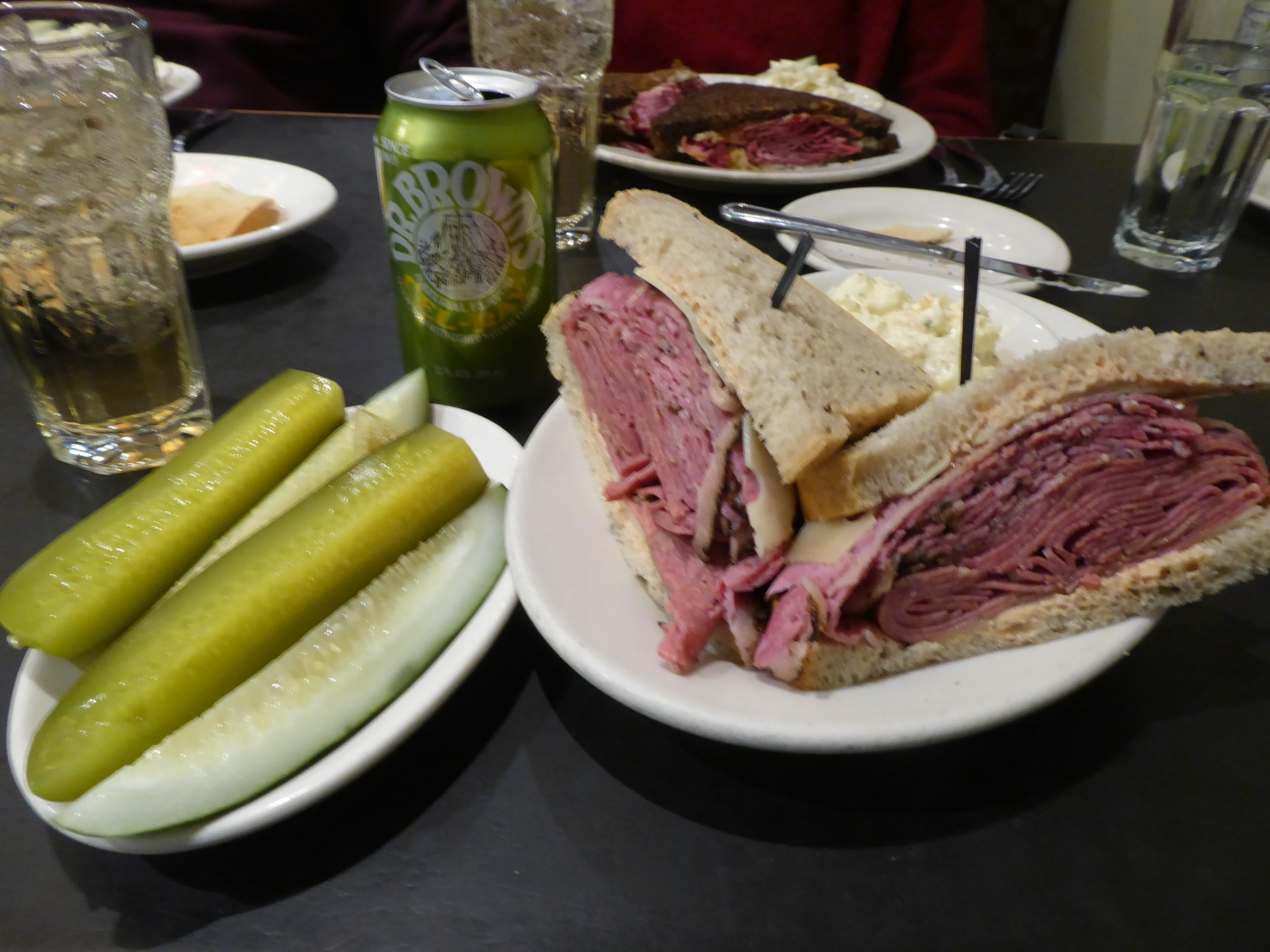 Betsy exhibits a can of Cel-Ray tonic. You’ll either love it or hate it: 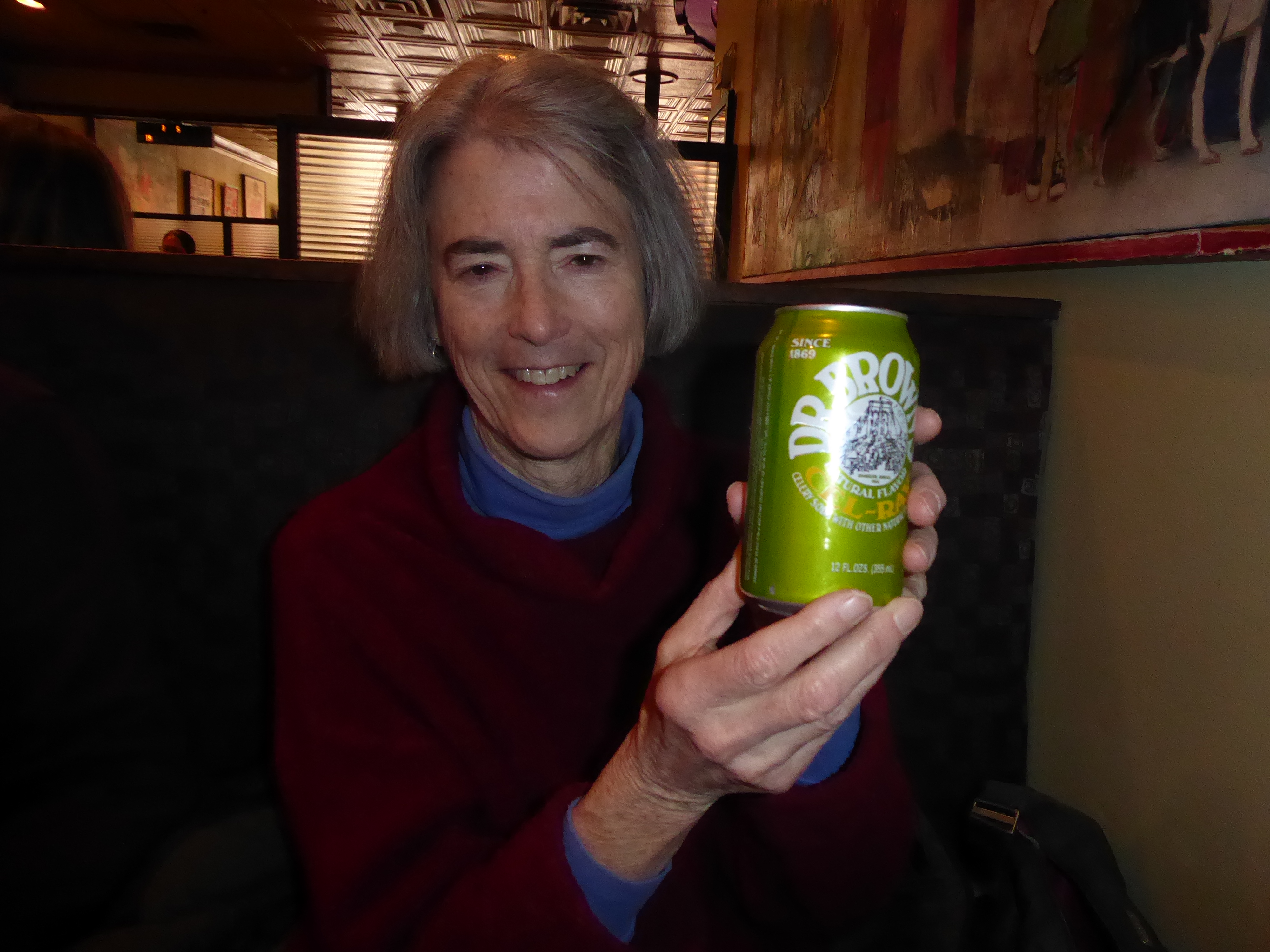 Tim had chopped liver (chicken liver, of course) with a Dr. Brown’s root beer (wrong choice of beverage) and cole slaw on the side. All sandwiches were pronounced excellent, but I still think the New Yorker should have been served on sturdy rye rather than fragile cissel bread. 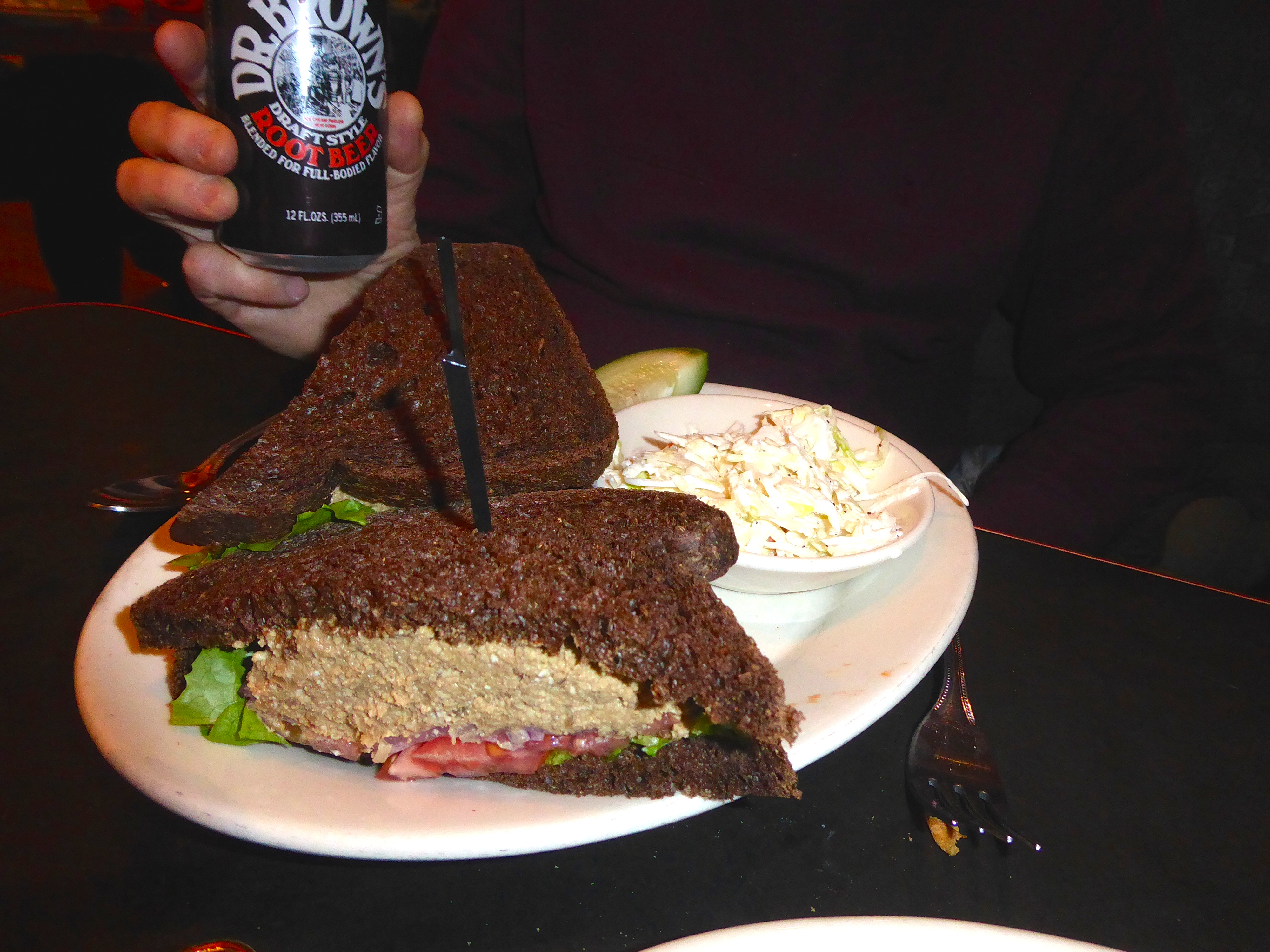 I sent a picture of my sandwich to Steve Pinker, who of course grew up in Montreal, home of great Jewish food (Steve’s a secular Jew). His response was mixed:

“Mmmm….. though any Montrealer will tell you that pastrami is far inferior to smoked meat, especially from Schwartz’s Hebrew Delicatessen (forced by the government to change its sign to Charcuterie Hebraique).”

This historic house was next door to the restaurant: 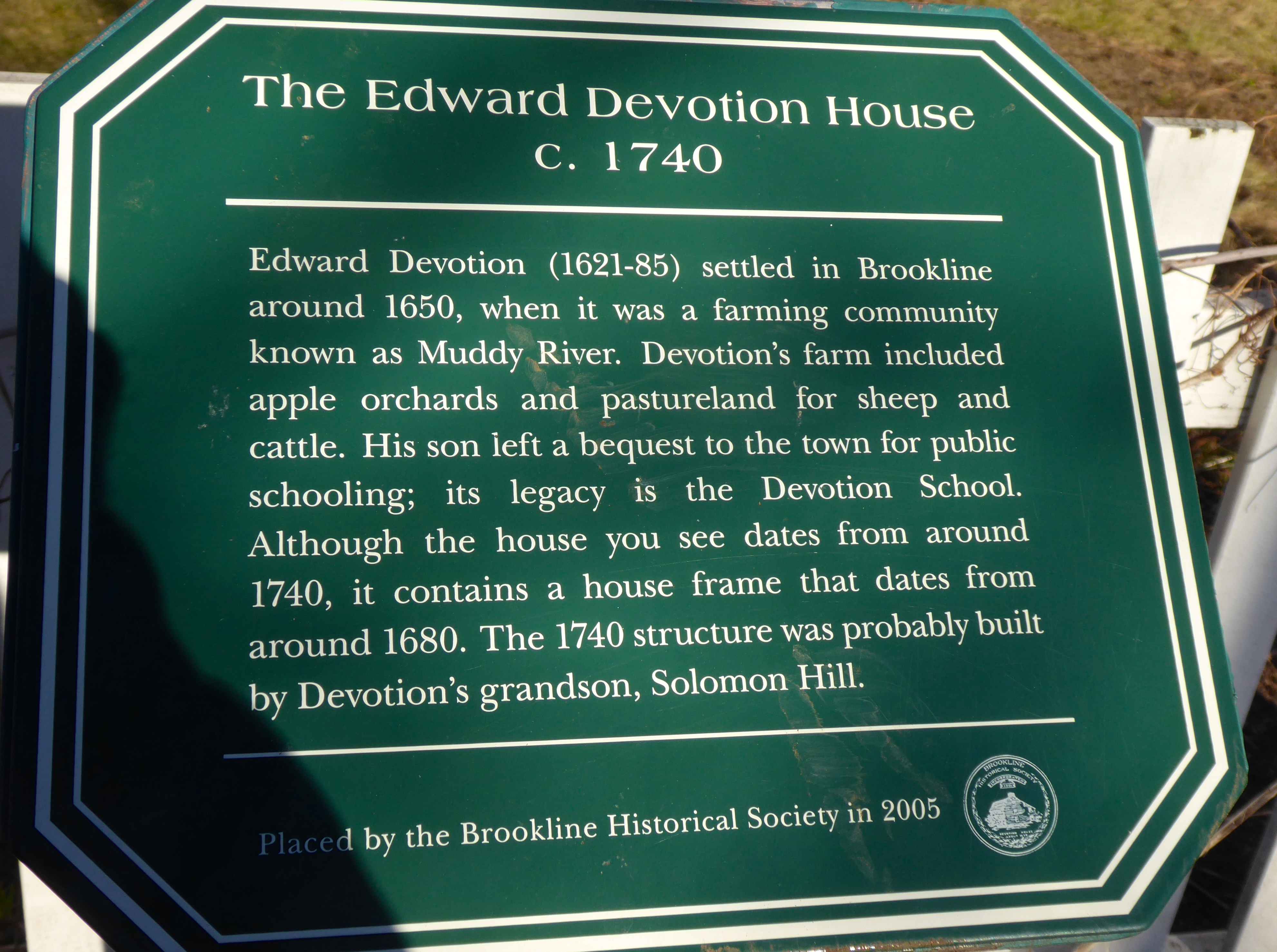 More on the Devotion House from Wikipedia:

The Edward Devotion House is a historic house at 347 Harvard Street in Brookline, Massachusetts. Built about 1745, it is one of the town’s few surviving 18th-century structures, and is of those the best preserved. The house is owned by the town and administered by the Brookline Historical Society as a historic house museum. The home also serves as the headquarters of the Brookline Historical Society. It was listed on the National Register of Historic Places in 1978. 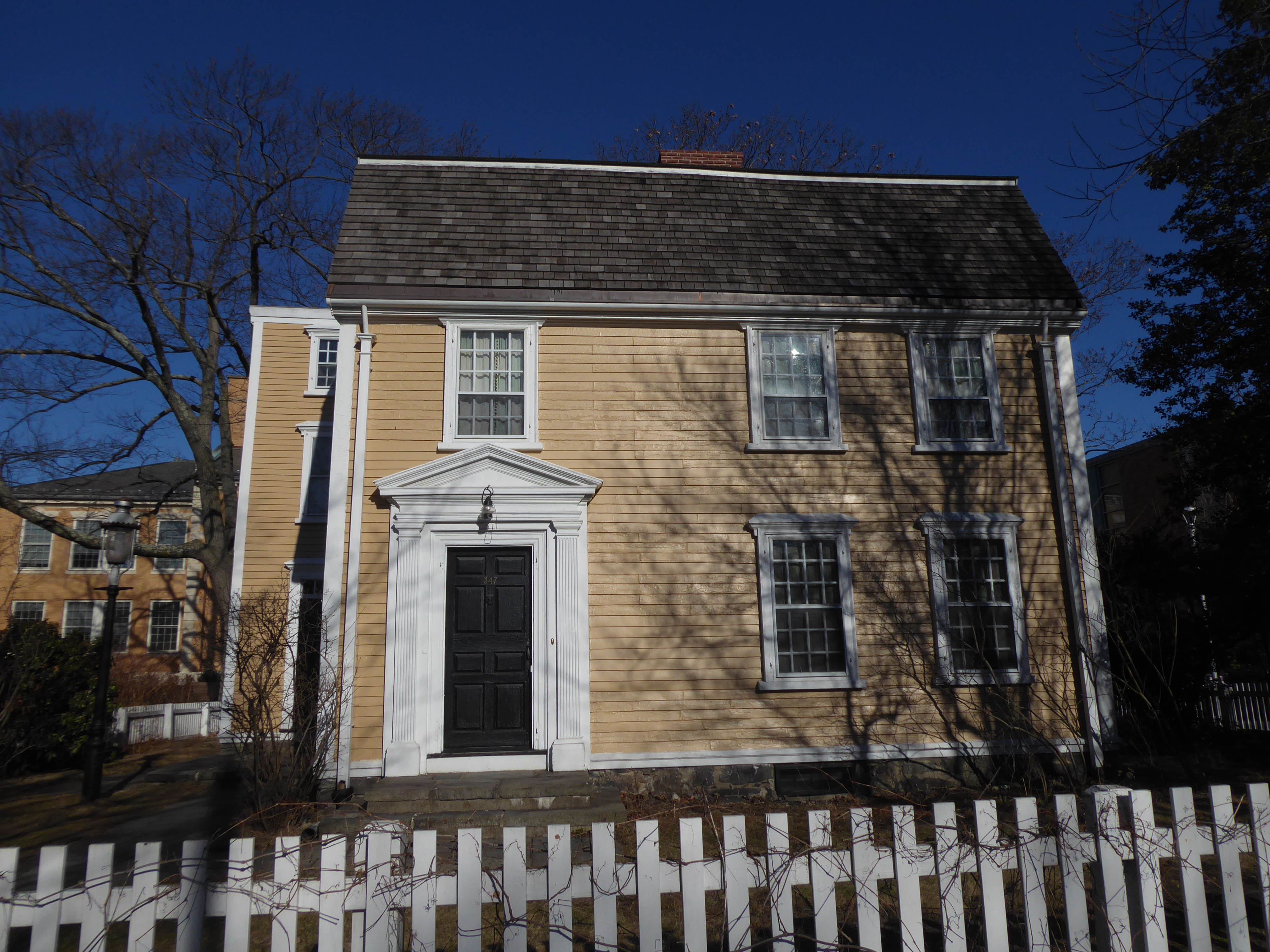 On to Kupel’s for bagels. They are popular, but I found the bagels okay but not spectacular, especially compared to the dense, chewy, wood-fire-cooked bagels at the Fairmount in Montreal (scroll down in my post).

I didn’t photograph those tori of air and flour, but I did see that the bakery had Hamantaschen on sale, a hard-to-find triangular Jewish pastry (mimicking a tricornered cap) usually sold only around the holiday of Purim (March 9-10 this year). They come in several flavors, but the classic is prune. I purchased prune and apricot, which were excellent: 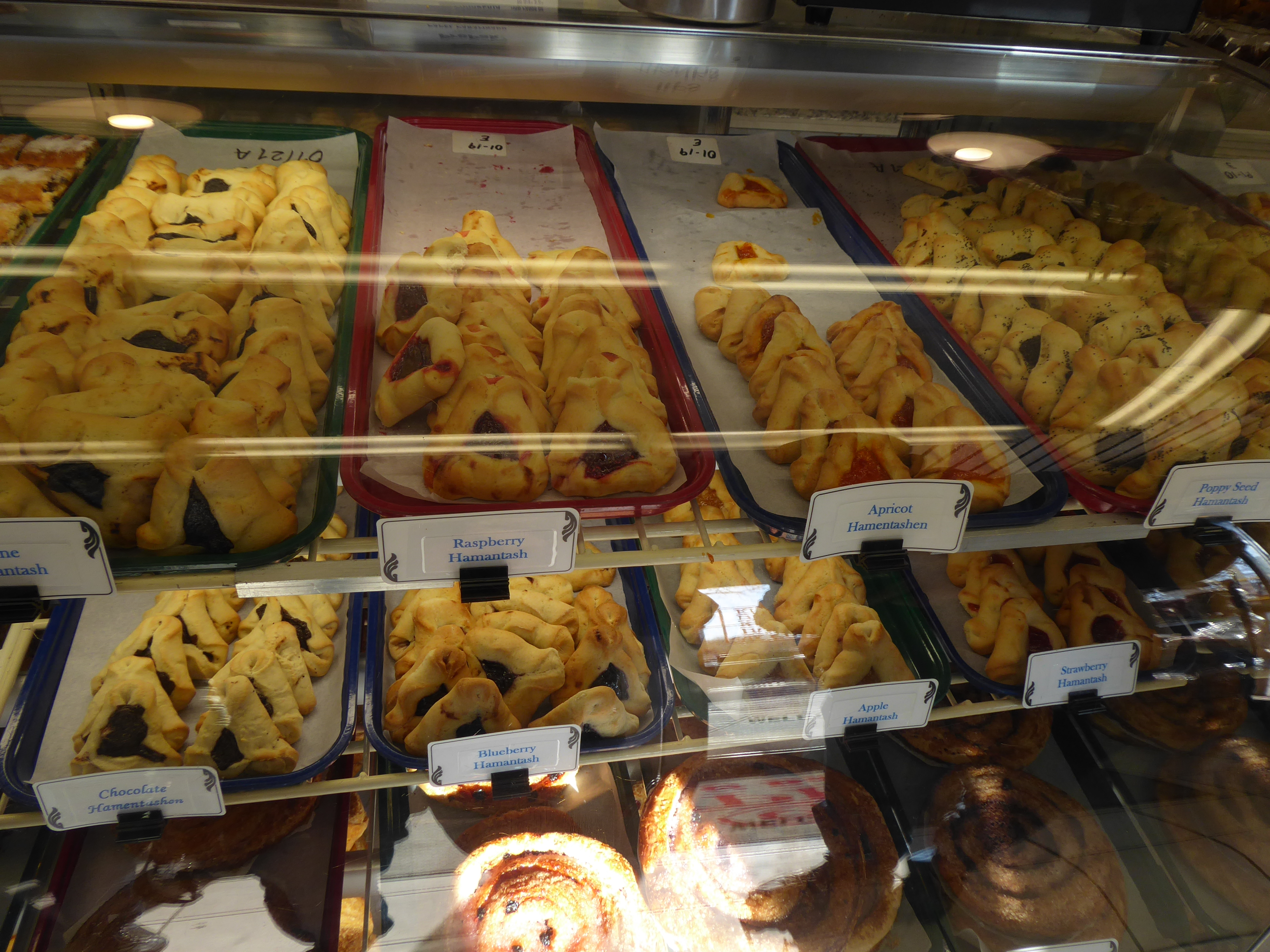 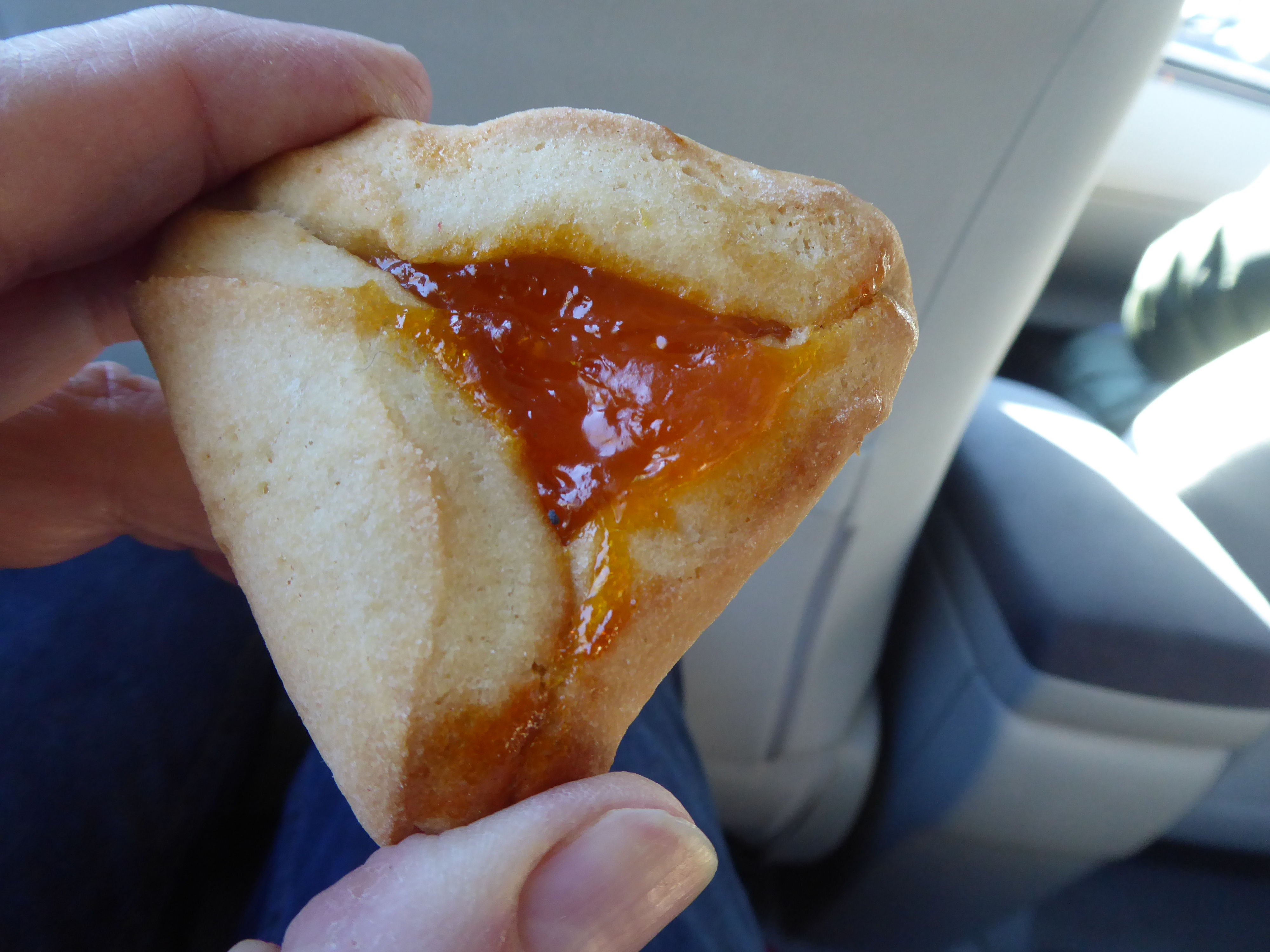 Tonight: Dinner at Olé, one of my favorite restaurants in Cambridge (it’s upscale Mexican).