Yesterday at Psychology Today, a website that can be pretty dire, Lee Jussim, a professor and social psychologist who happens to be chair of the Psychology Department at Rutgers, published an “Orwelexicon”:  a spoof of a genuine Woke Lexicon published by another journal. For spoofing wokeness, Jussim had his piece taken down by the Psychology Today.

First, though, we should note that Jussim has street cred in social psychology. According to Wikipedia,

He has published and spoken extensively on scientific integrity and distortions in science motivated by politics, stereotype accuracy, prejudice, bias, self-fulfilling prophecy, and social constructionism. His works have won professional awards: his 2012 book Social Perception and Social Reality: Why Accuracy Dominates Bias and Self-Fulfilling Prophecy won an American Association of Publishers’ Prize for best book in psychology, and his 1991 book Social Belief and Social Reality: A Reflection-Construction Model received the Gordon Allport Prize for Research in Intergroup Relations. During his recent 2013–2014 sabbatical, he worked with colleagues at Stanford University’s Center for Advanced Study in the Behavioral Sciences in the Behavioral Sciences and co-founded Stanford’s Best Practices in Science group.

Jussim’s piece was meant as a response to a woke and humorless lexicon published a year ago in BMJ, the new name for the former British Medical Journal. That piece resides behind a paywall, but you can see a run-on transcript here, or a judicious request might yield you a pdf:

Here are some of the neologisms created by Choo, DeMayo, and “Glaumoflecken” (obviously a coward who won’t reveal his/her/hir name). They’re neither clever nor funny, they can be perceived as somewhat misandristic in that they single out white males for special criticism (they could never do this with other groups which, of course, are perfect compared to white males), and this kind of woke stuff doesn’t belong in a medical journal, which is simply flaunting its virtue.

Well, if you think this kind of mockery is suitable for a scientific journal, more power to you. But apparently it rubbed Jussim (as it rubs me) the wrong way, and he responded by putting up his own “Orwelexicon” mocking the woke mentality that produced the BMJ glossary. You could have seen Jussim’s piece yesterday if you clicked on the screenshot, but what you get if you do that now is the second screenshot:

The article has disappeared! 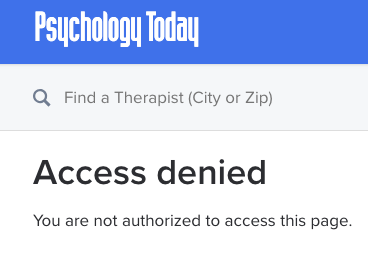 Jussim is angry about this, as his Orwelexicon (a clever name) was a spoof. The journal simply removed it:

PsychToday took down the Orwelexicon Post.
I am appealing.
If I lose the appeal, it will reappear, trust me. Might take a few days.

But you can still see it! You can see it at the Imgur link here, and I also have a transcript and screenshot. Here’s Jussim’s introduction and a few terms he coined:

In an article published in BMJ, a major biomedical journal, Drs Choo & Mayo presented a “Lexicon for Gender Bias in Academia and Medicine.”  They argued that “mansplaining” was just the “tip of the iceberg” and so they coined terms such as:

Himpediment: Man who stands in the way of progress of women.

This Orwelexicon is offered in a similar spirit of capturing biases, albeit quite different ones, that pervade academia.  It is also a bit different, at least sometimes, because these words often capture the Orwellian disingenuousness with which some terms are used in academia. 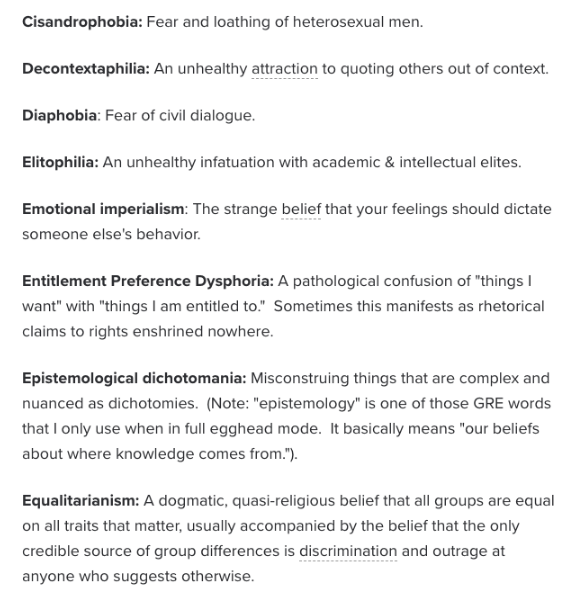 If you want to see all Jussim’s examples, go to the Imgur site above.

Well, we all know that every venue of mainstream or liberal journalism (at least those I read) is becoming more woke, so it’s not that surprising that Psychology Today would take down this post mocking Wokeness at the same time that BMJ publishes an article that mocks male behavior. Granted, men in academic situations often behave in a peremptory, sexist, or domineering way, but the medical lexicon is grating and cringeworthy, as well as being a form of racism/sexism that would not be tolerated if directed at any other group—unless all other groups behave perfectly and in a non-tribalistic way.

And, at any rate, Jussim’s spoof is not directed at any ethnic or gender group in particular, but at the pathologies of Wokeness itself. It didn’t deserve to be censored, as it does make fun of things that need to be mocked.

We’ll see if Psychology Today puts it up. Jussim is hopeful; I’m not. For if they reinstate the piece, the Woke will hound the journal to death, calling for the editors’ resignations, and probably for Jussim’s as well. So it goes.