Tutorial demonstrating how to put on a jumper with minimum disturbance to the cat round your neck.

This cat, Tiger, is said to be the oldest living cat in America (though not in the world). As Cole and Marmalade report, Tiger, who lives in Illinois, is a remarkable 31 years old. You can read the article by clicking on the screenshot below. 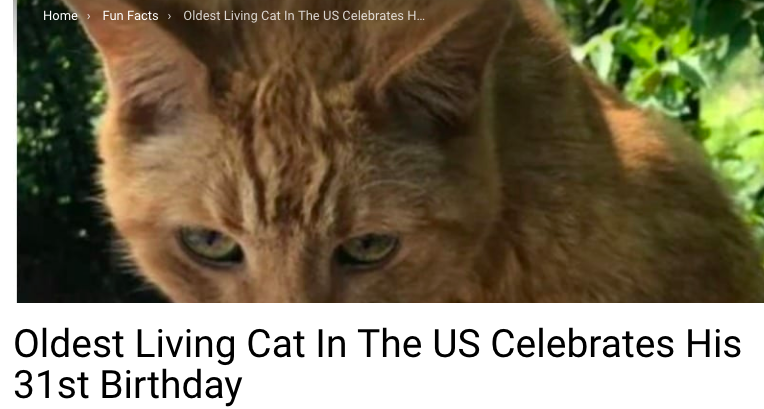 Curious as to this oldest living cat’s secrets of longevity, his owner shares with WWBM radio the magic behind his cat’s impressive lifespan:

“Tiger has always eaten dry cat food and will only drink out of the bathtub. He still likes to go outside and sits on top of a car…”

According to Goldstein, he acquired the cat in 1996 from his then-girlfriend, who got him in 1989. The image that caught the attention of Reddit users came just after Tiger’s owner took his kitty to the vet for a routine checkup.

. . .And Tiger isn’t Goldstein’s only pet. He also has a pet pit bull that Tiger makes known who is boss around their home:

According to Wikipedia, the oldest living cat is Sasha, still alive in the UK at age 33. The record, of course, is held by Creme Puff, who lived 38 years and 3 days on a diet of dry cat food, bacon and eggs, broccoli, and coffee! See the video of Creme Puff, Jake Perry the staff, and other aged cats here.

From the BBC (click on screenshot) we have a robot waiter cat made in China. It’s not yet ready for prime time, but will undoubtedly be wildly popular in Japan:

A robot cat designed to ferry plates of food to restaurant customers has been unveiled at the CES tech expo in Las Vegas.

BellaBot, built by the Chinese firm PuduTech, is one of a number of wacky robotic inventions being shown off at the event this year.

There is also UBTech’s Walker, which can pull yoga poses.

And Charmin’s RollBot. It speeds a roll of toilet paper on demand to bathrooms that have run out of the stuff.

One expert said it was likely that robots exhibited at CES would only continue to get more bizarre in the future.

BellaBot, the table-waiting robot cat, is a service bot with personality.

It mews when it arrives at tables to encourage customers to pick up their food.

And if the diners stroke BellaBot’s ears, it initially reacts with pleasure.

“The owner’s hand is so warm,” the bot is programmed to say in response.

But if customers continue petting it for too long, its expression changes.

“It gets mad to remind you not to interrupt its job,” explains the firm.

6 thoughts on “Caturday felid trifecta: How to put on a sweater while wearing a cat; oldest living cat in the U.S. and U.K.; Japanese robot cat waiter meows at restaurant customers”