If you followed the fracas between Gibson’s Bakery in Oberlin, Ohio, and Oberlin College, as many of us did (see here), you’ll know that one of the plaintiffs in the civil suit against the College, David Gibson, had cancer. It turns out that it was pancreatic cancer, an almost invariably fatal disease, and Gibson died of it on November 16. He was 65.

Daniel McGraw, who covered the crime (shoplifting by students), the defamation suit (Gibson’s claimed that Oberlin College inflamed the students and tarred the bakery as racist), and the outcome (a fine of $31.5 million against the College) for the site Legal Insurrection (LI), has written a longish memorial piece that reprises the suit and Gibson’s attempts to get justice. It’s at Quillette, and you can read it by clicking the screenshot below.

Although LI is a conservative site, I’ve always thought that its coverage of the issue was fair, and no other venue covered the Oberlin affair as thoroughly. 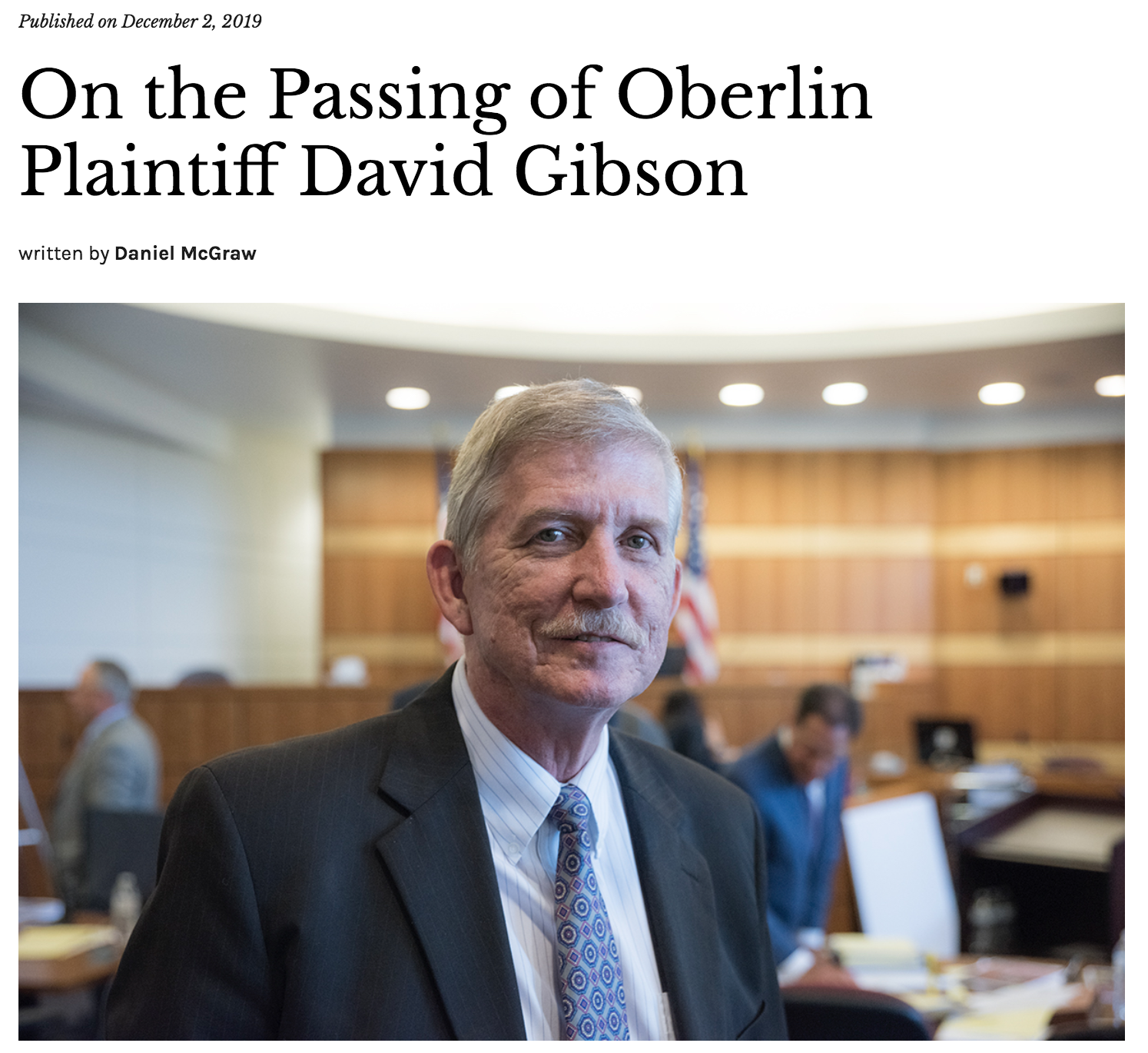 I won’t reprise the facts of the case, or what I’ve written already. I’ll just note a few things from McGraw’s piece that I didn’t know, or didn’t remember.  I’ve indented the quotes from his article:

1.) The verdict against the College is unlikely to be overturned.

The college was accused of providing malicious support to students circulating defamatory claims that Gibson and his family were racists. These claims, the jury would subsequently conclude, were baseless. The prestigious liberal arts college was found guilty of libel, and ordered to pay close to $50 million in damages. (Both the verdict and the award are being appealed, but while the damages may be reduced, depending on what state caps permit, legal experts say the reversal of a civil case like this one is unlikely under Ohio law.)

Good. I want Oberlin to get hit hard in the pocketbook, so that that school will think twice before siding with its students in a losing cause. There was no evidence that Gibson’s was a racist establishment, but the College tried to perpetuate that myth, perhaps to look good in the eyes of its students (see point 4 below).  You can’t just go tarring people as “racists” when there’s no evidence of it.

2.) David Gibson made a settlement offer that didn’t involve money, but only an apology.  Oberlin rejected it.

For Gibson and his family, meanwhile, the verdict provided hard-won vindication but also bemusement. “All Oberlin had to do,” Gibson told me in September, “was to say we weren’t racists and there would have been no trial. What I didn’t understand is that they didn’t have the civility to do so. The basic civility we all try to live by. They didn’t seem to understand that.”

That mistake cost them over 35 million dollars.

3.) The College insists that the case is about the students’ free speech, not defamation of Gibson’s by Oberlin College. Here’s an editorial in the Columbus Dispatch by the College’s President, Carmen Ambar, that appeared in July (click on screenshot; you may have to register for free): 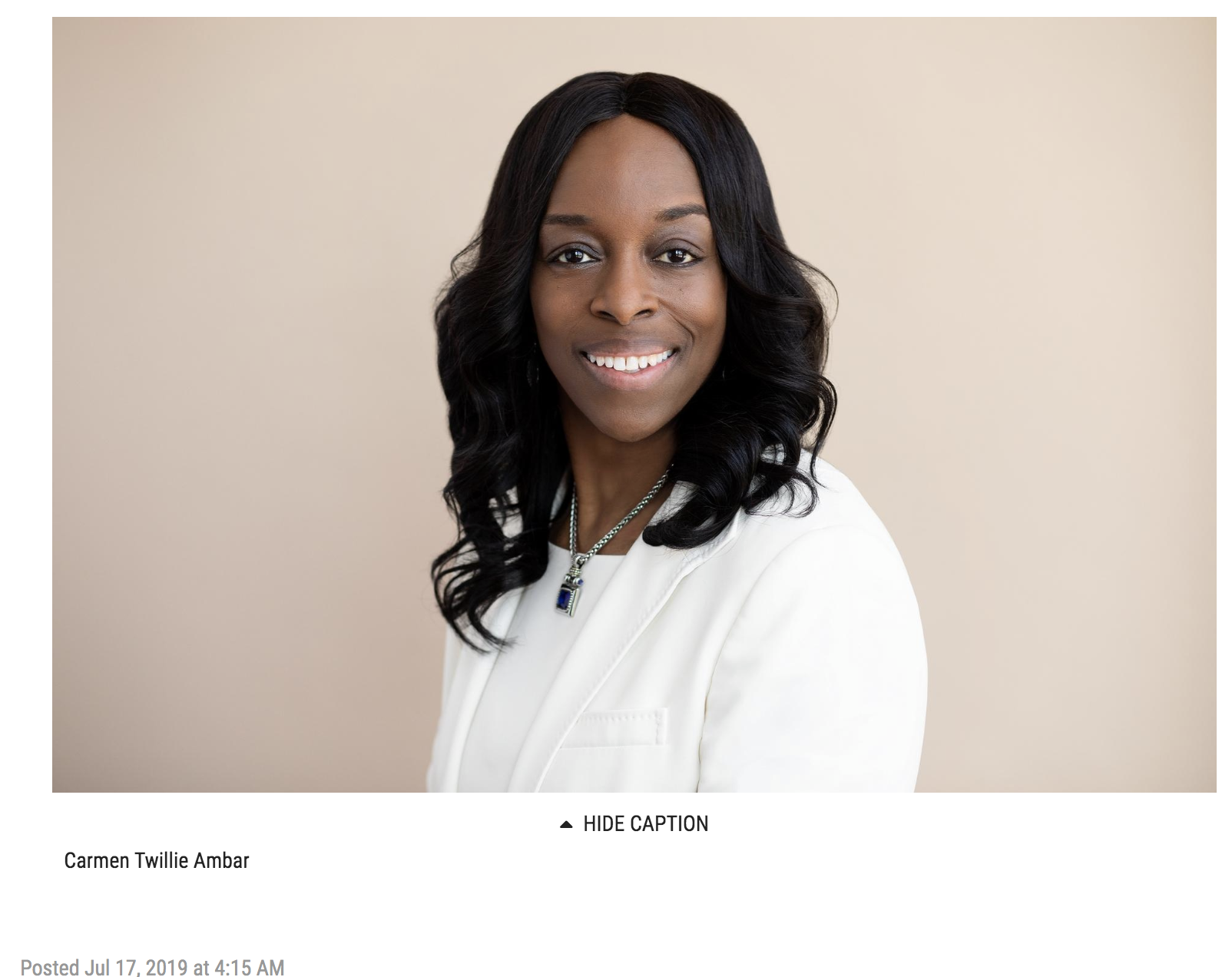 The piece by Ambar is disingenuous; the case was never about free speech but she’s waving about the Constitution and the mantle of victimhood (“they’re suppressing us!”) in an attempt to distract attention from what the verdict really dealt with, and what the judge instructed the jurors:

Academics who never set foot in the courtroom insist that the case was about the right of students to freedom of speech, even though the judge had explicitly declared such arguments irrelevant. The trial was intended to determine whether or not the college had “aided and abetted” the dissemination of false and defamatory claims made about Gibson’s bakery by Oberlin students, and the jury was asked to decide if the school had promoted accusations it knew to be untrue.

. . . This past fall, Gibson told me that the school president’s interventions in this vein were what bothered him most. “We have never said that students don’t have the right to free speech,” he said. “Our family has had this business on the town square for more than 100 years and we have seen many protests. We have helped students through the years, even letting them use our tables and chairs on the sidewalk during this protest. But the school couldn’t even do a simple and basic thing by saying in some way that we aren’t racist. Because we weren’t and we aren’t.”

The Gibsons have always come across to me as hard-working and decent folks who simply wanted to wash away the stain that Oberlin College put on their reputation. The whole issue could have been settled had Oberlin acceded to their request for an apology, along with a statement that they weren’t racists (police records of the race of shoplifters showed that the bakery didn’t discriminate against blacks). But Oberlin was recalcitrant, perhaps, as we see in the next point, to launder its own reputation.

4.) Oberlin might have used the case to deflect student charges that the College was itself racist.

. . . David Gibson testified that the school had offered to allow the bakery’s food back in the university cafeteria on two conditions: that Gibson’s drop the shoplifting charges, and agree to report all future instances of theft by students to the university and not the police. Gibson refused. “They didn’t want to move forward until we agreed to special treatment for students shoplifting,” he told the jury. “But I kept telling them that we have to be consistent and call the police no matter who is stealing.” Only later did he realize that the school administrators might be using the controversy to launder their own reputations. “[The school administration] had been accused of being racists by students in the previous year,” he testified, “and I think they used us to deflect from that problem they had. I believe they were using us as a target so that their racial problems with their students would go away.”

In December 2015, Oberlin College’s black student union had published a 14-page, 58-point list of demands, in which they accused the university of “anti-blackness” following four separate race-based controversies in a single year. At the end of May, the New Yorker published a long essay about Oberlin College entitled “The Big Uneasy,” examining unrest at the college, in which one student interviewee complained, “I literally am so tired of learning about Marx, when he did not include race in his discussion of the market!” When Donald Trump defeated Hillary Clinton on November 8, 2016, the students thought their world was ending. “Part of the inconceivable quality of the election is, I don’t know a Trump voter personally, and I can’t imagine someone voting for Trump,” an Oberlin College senior told the campus newspaper. “I don’t know how to reach across that line. I don’t even know who they are.”

Finally, I emphasize again that the good guys in this issue are the Gibsons and the bad guys are the administrators of Oberlin College. (I’ll excuse the students because they’re young.) If you don’t think that, just read this:

During the prosecution of the three shoplifters, Oberlin’s attorney attempted to get the charges reduced from felonies to misdemeanors, a deal that required Gibson’s cooperation. Gibson was asked if he would meet with the shoplifters and speak to them about the larger issue of shoplifting and how it affects small businesses and their customers. Sure, Gibson replied, they can come to the store and I’ll show them how we work. In the end this arrangement fell through amid legal wrangling, but the students were eventually charged with misdemeanors anyway. In September, I asked Gibson why he had agreed to reduce the charges. “I’ve done this before and feel the same way as I always have,” he told me. “A felony can follow them further down the road, and I don’t want anyone to have to deal with that because of something stupid they did in college.”

That is a man with empathy and compassion, but a man blindsided by the fulminating wokeness of Oberlin College’s administrators. As McGraw reports, among the 300 mourners at David Gibson’s funeral, there were only a handful of people from Oberlin—all retired professors. The College didn’t even have the decency to send a representative.