Demonstrations continue throughout Chile, despite the President’s promise to reform medical care, pensions, and other issues. We’re still under curfew in Valparaiso, and the Guardian reports that the legislature, which sits in this town, was evacuated yesterday after protestors tried to force their way in.

In the capital of Santiago yesterday, there was a giant protest, with over a million people reported to  have taken to the streets. Here’s a photo of the crowds:

There is no sign of the protests abating, and some say that they won’t until President Sebastián Piñera resigns. Our ship departure has been delayed nearly a day because (I think) it cannot load passengers in the evening after curfew. 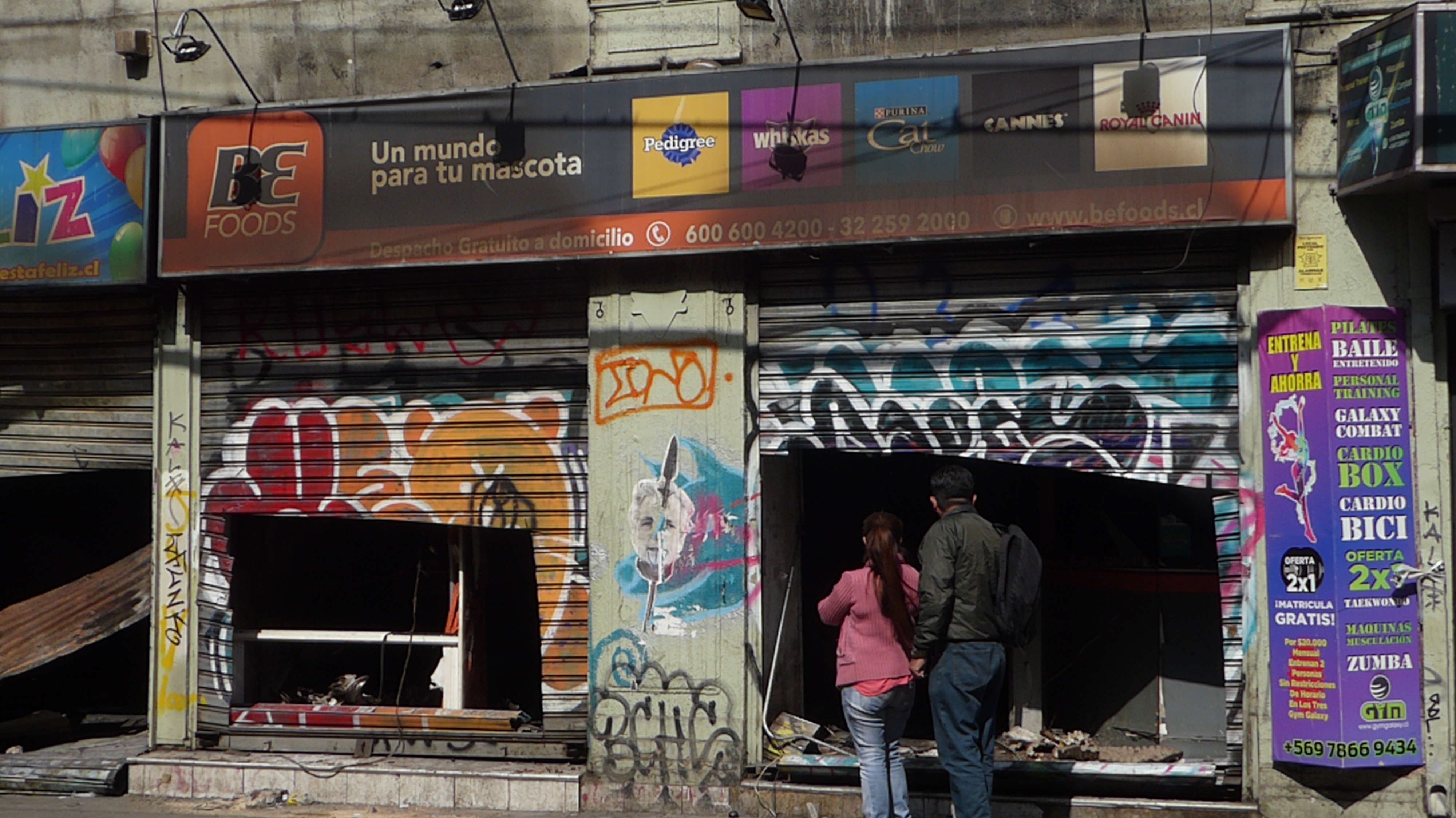 Police and protestors in front of a grocery store two days ago; the cops are guarding the entrance to prevent looting. 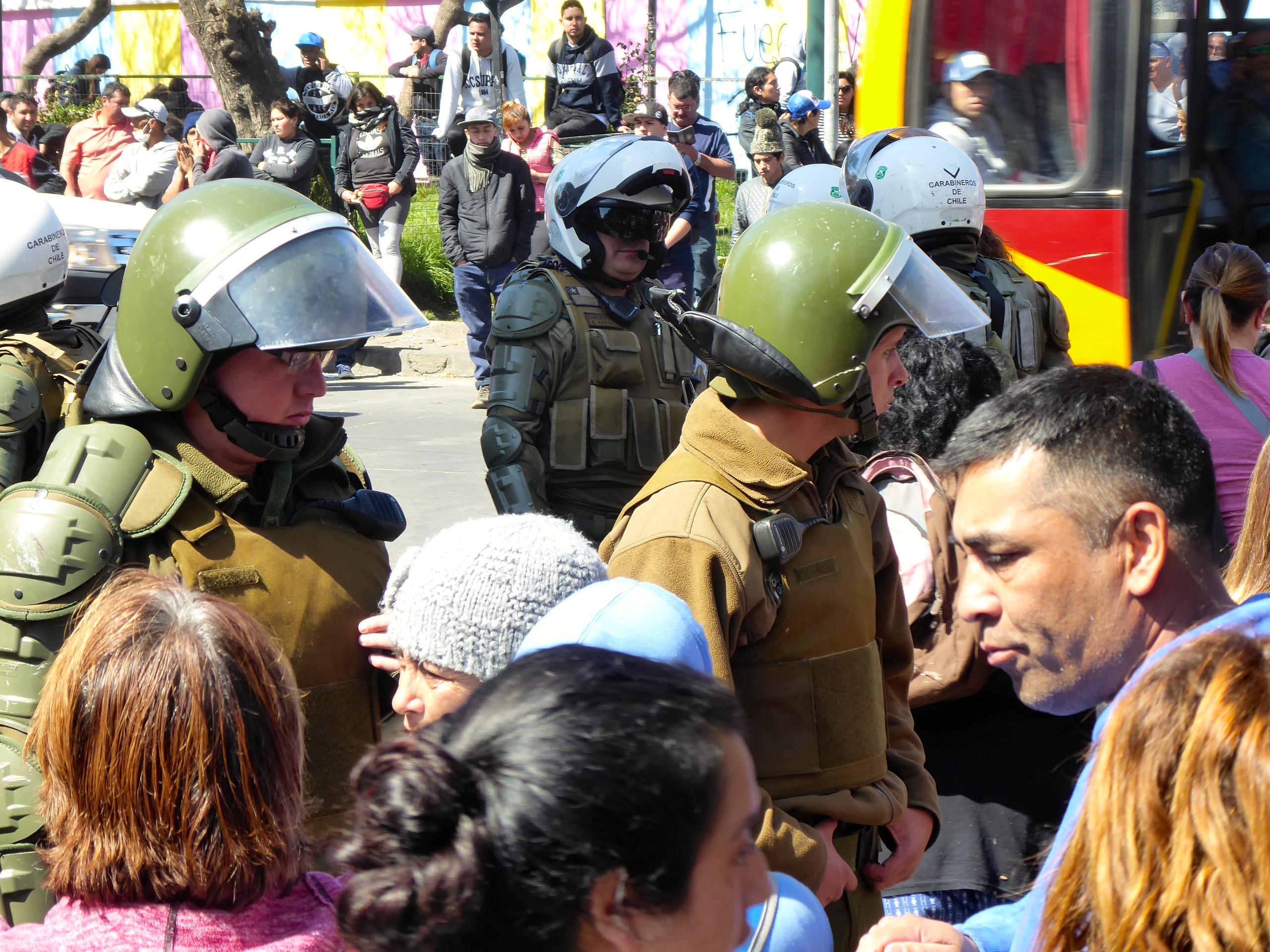 Police by a water cannon truck: 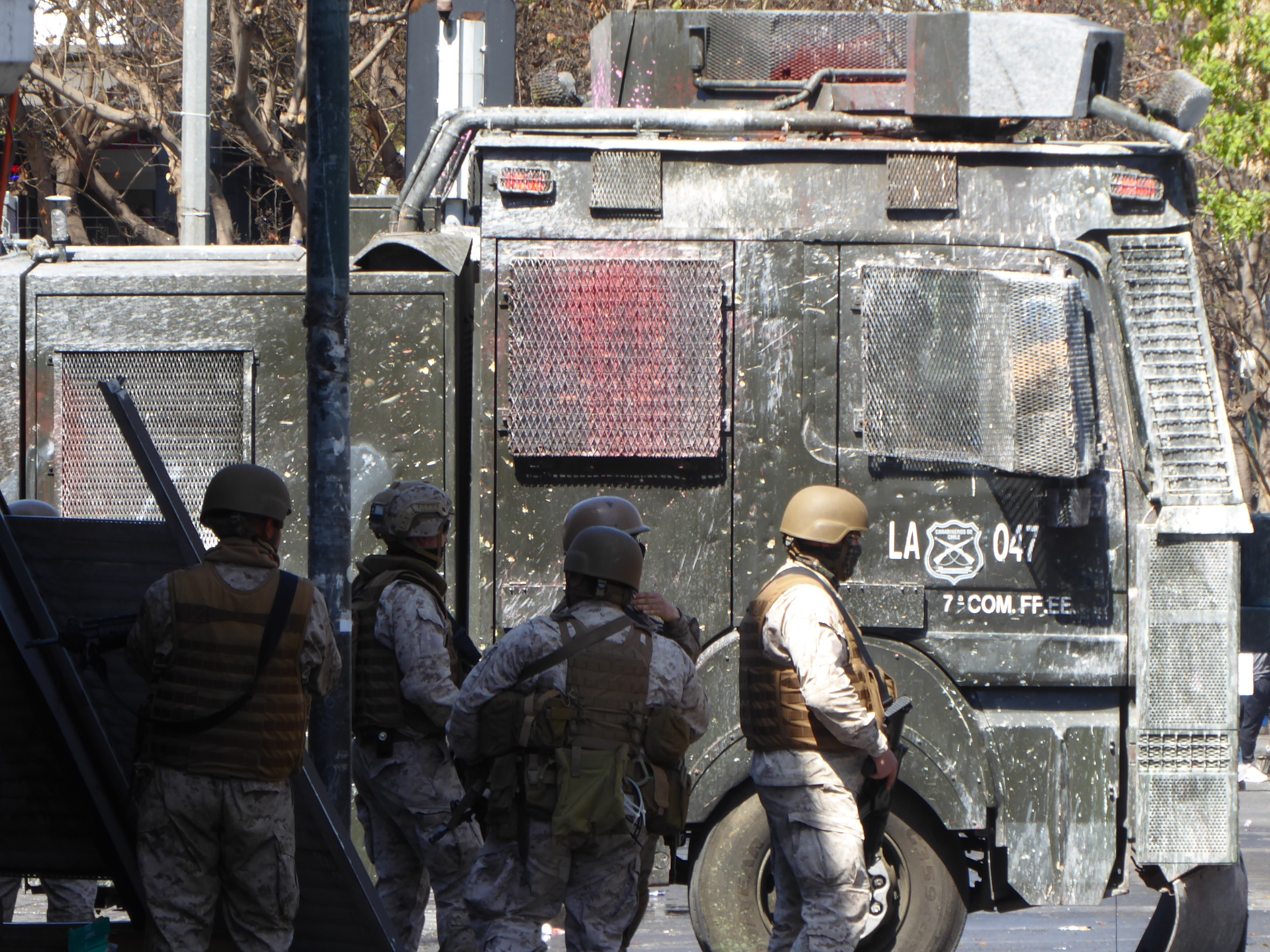 Some of the protestors. The ones I’ve seen in Valparaiso have generally been young: 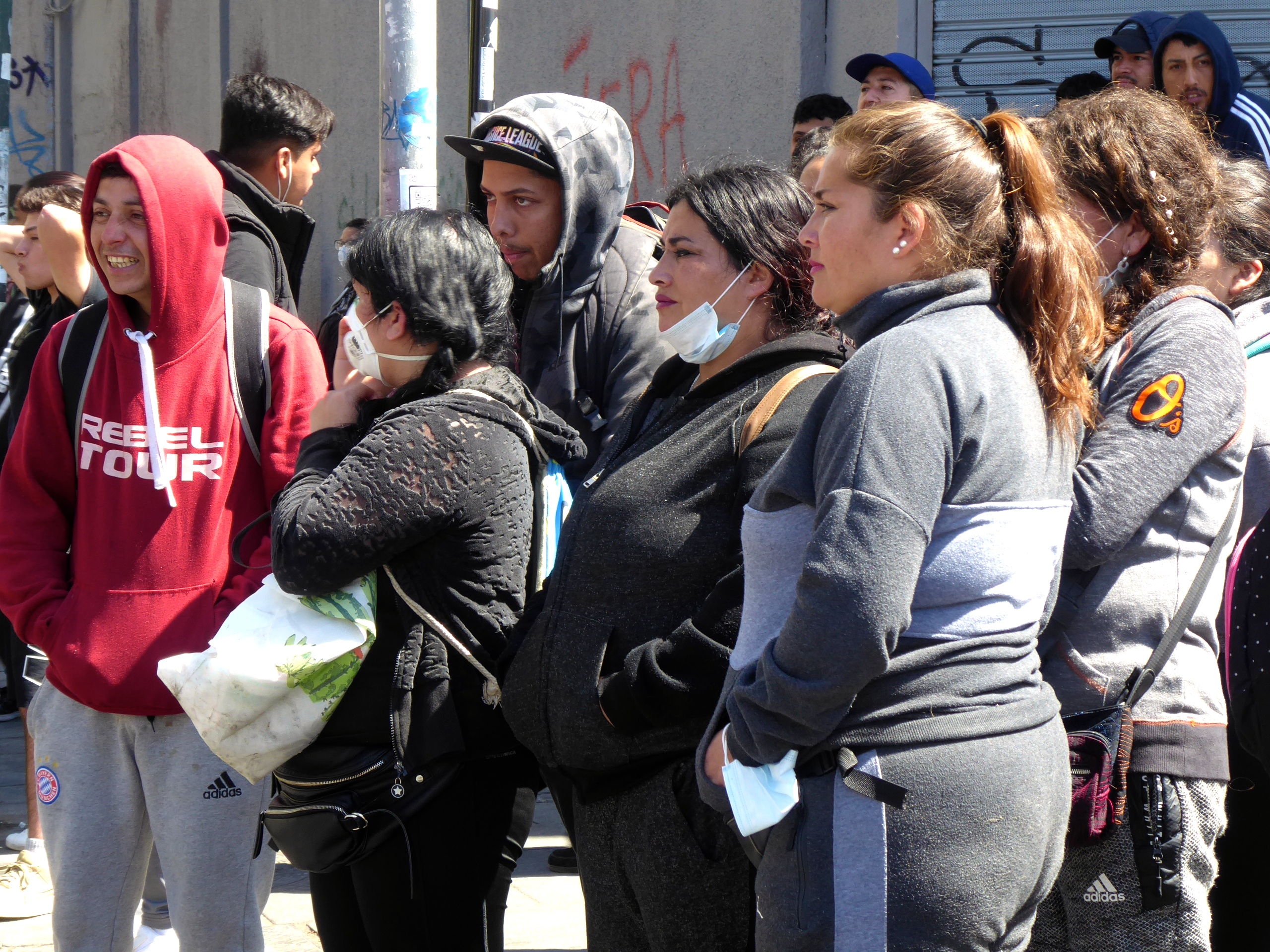 A video of protestors and cops:

Here the protestors chant (as far as I can make out), “Todo la comida!” (“All the food!”) The cops stood firm and were not violent, though they have fired tear gas in the city.

After a while, we heard sirens and more cops and a water-cannon truck converged at the store. Here you can see the truck firing a rather lame stream of water, which did, however, disperse the protestors.

Fresh blood on the street: 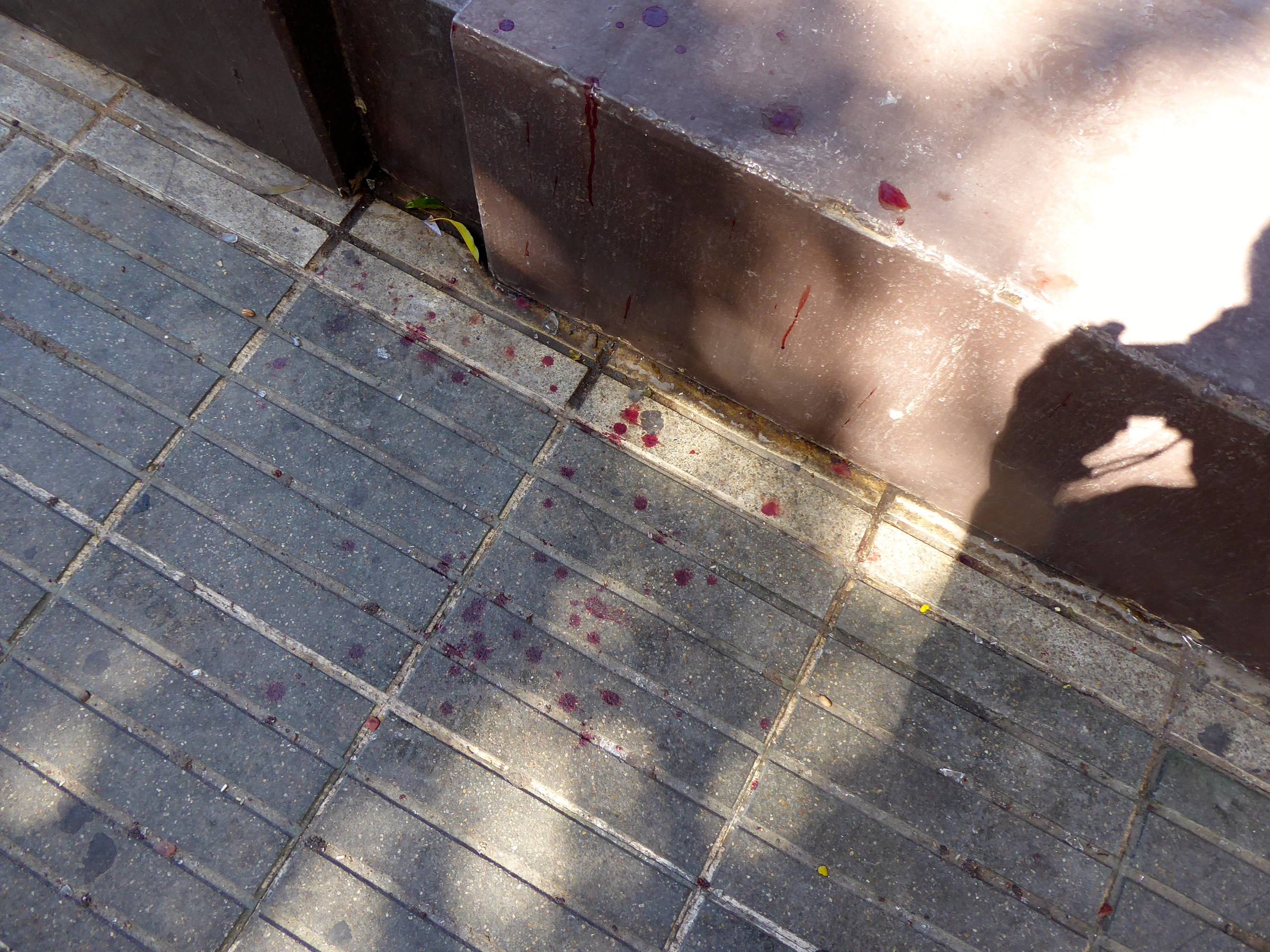 Life goes on, though many stores and restaurants are closed. Here’s a line in front of one of the few open pharmacies; someone has written in Spanish “War on the state”: 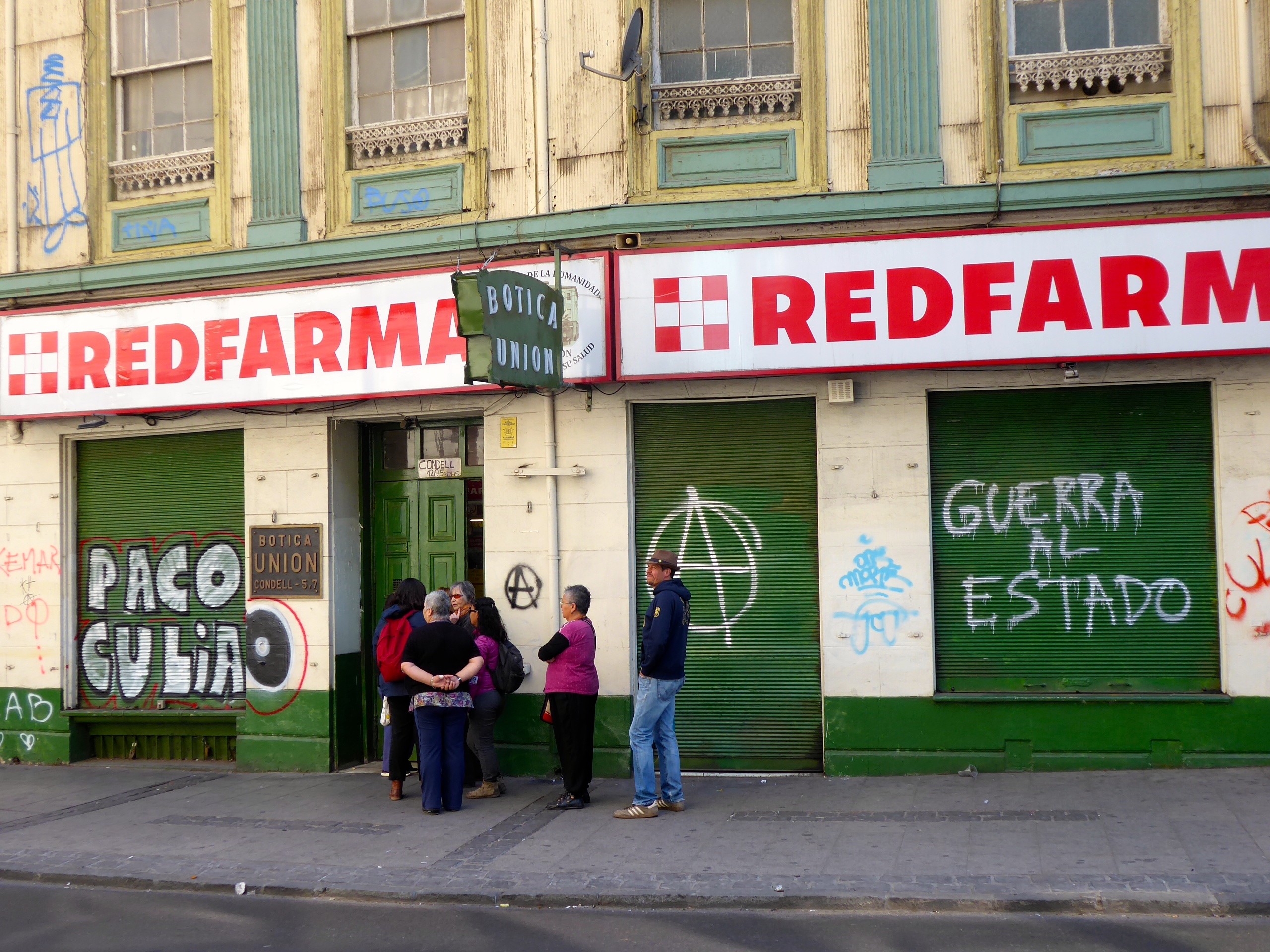 The markets have reopened, though not fully: a sign that people still need food. They buy from little food shops since the supermarkets are closed (or looted), and many people are walking about hawking toilet paper.

Here’s a seller of traditional herbs (readers who know what they are should weigh in). One US dollar is worth roughly 725 Chilean pesos, so most of these are about a buck. 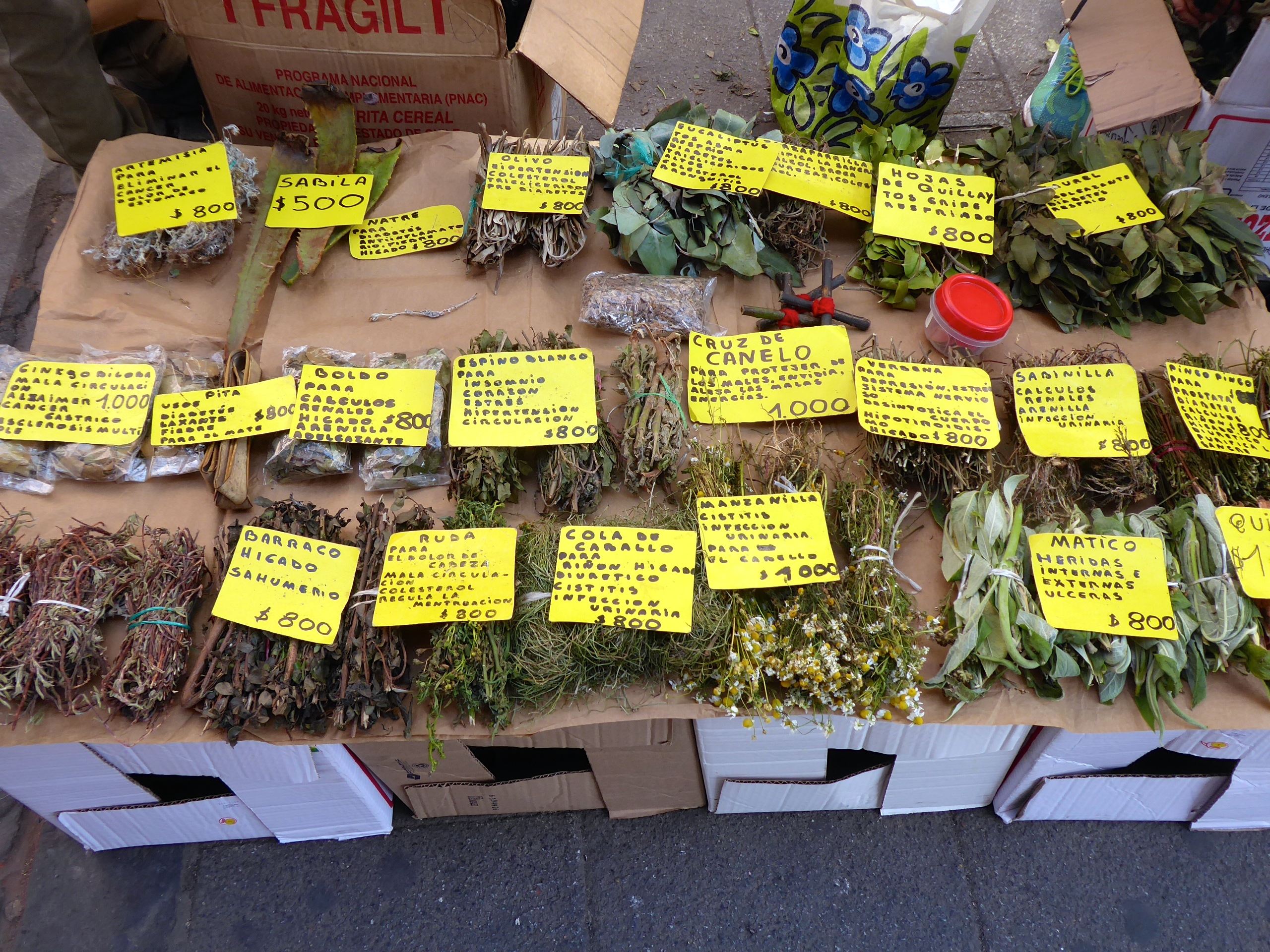 Empanadas, one of the national foods of Chile (and Argentina) are on sale again; they were hard to find the last few days. We didn’t essay one of these two days ago as we were on our way to lunch, but had some yesterday, pictured below. I like the classic “pino” empanada, with meat, onions, olives, and hard-boiled egg.

These are the main varieties: 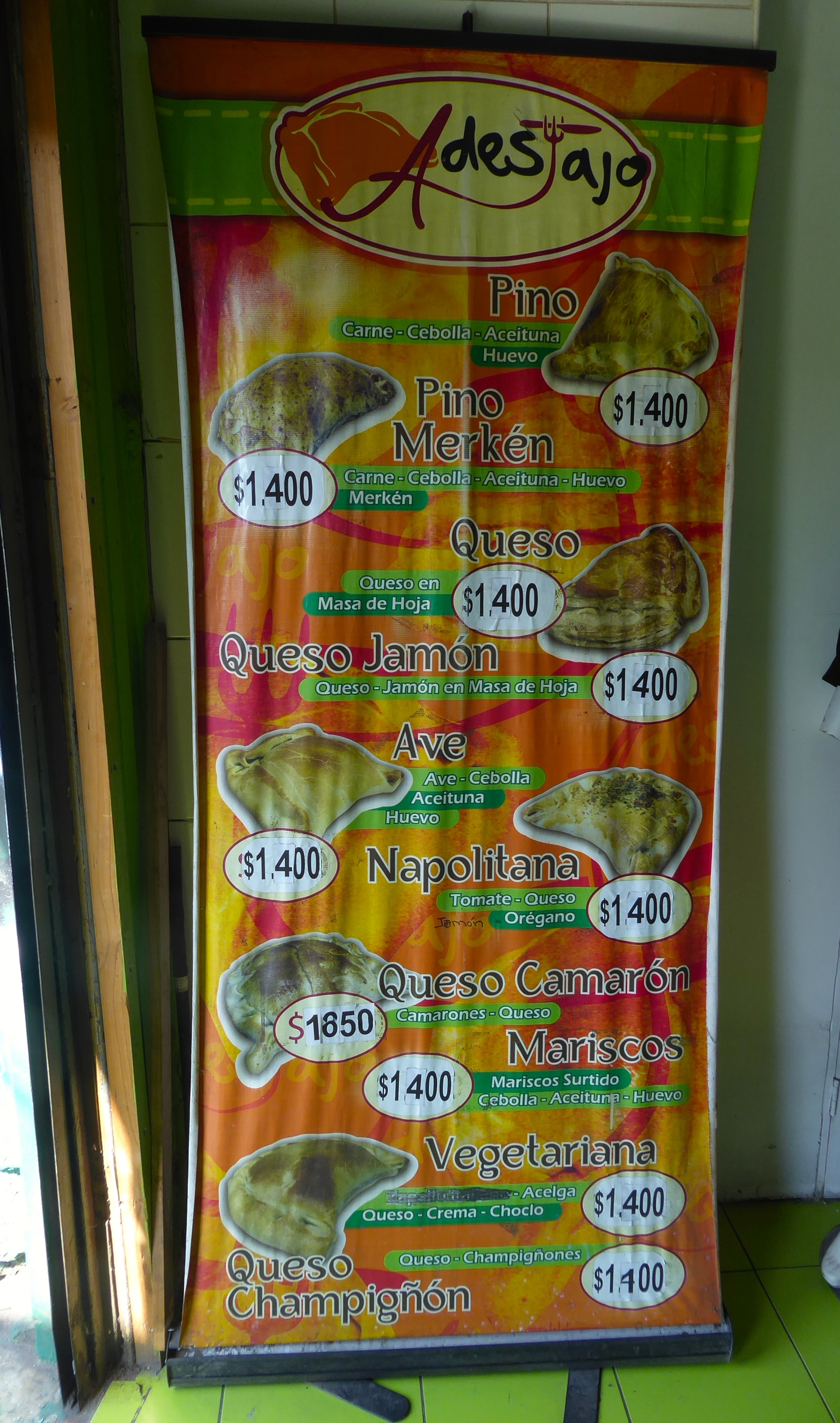 The pino empanada, exterior and dissected. (They cost, as you see above, about two bucks, and make a substantial lunch or snack.) 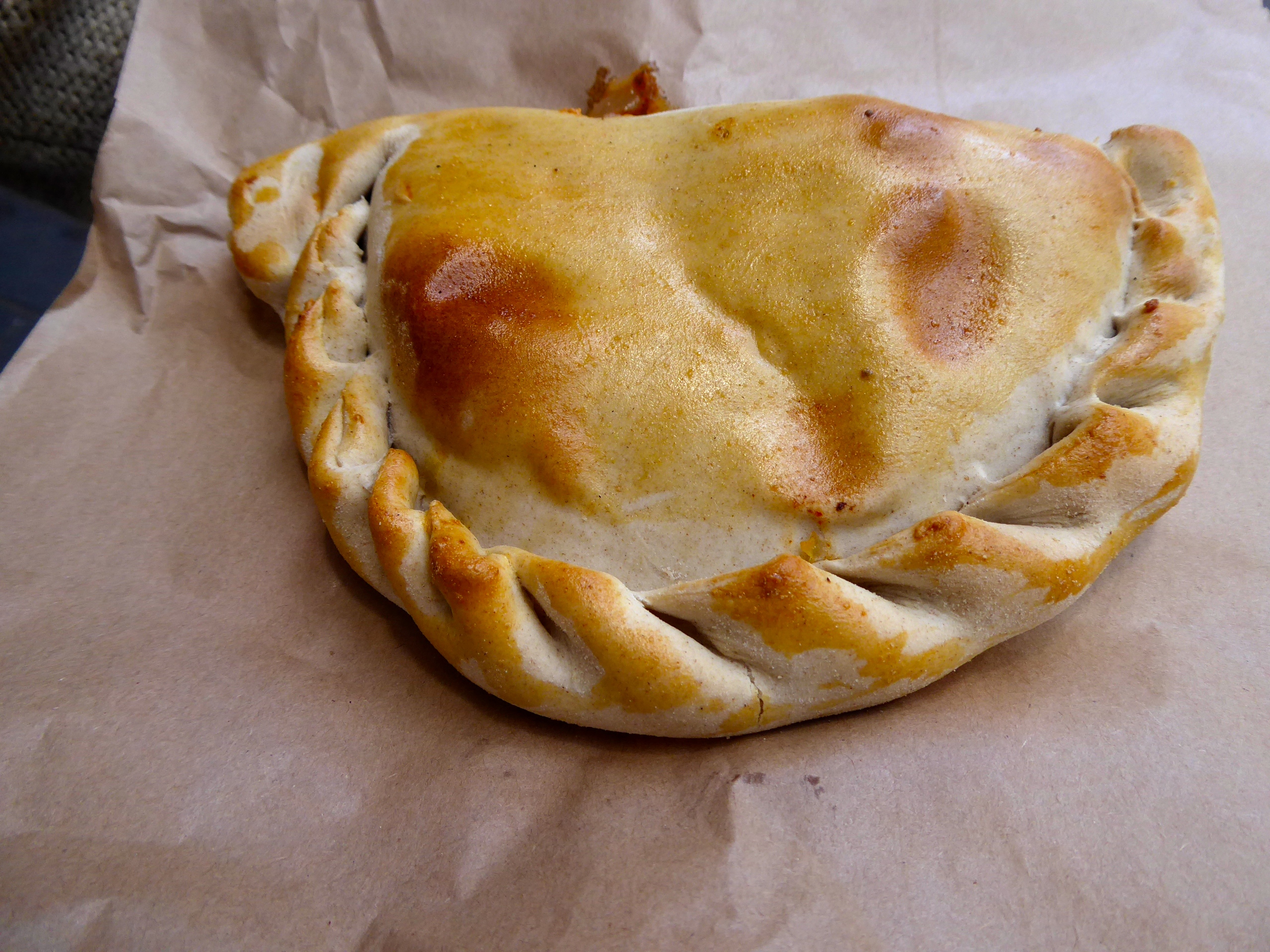 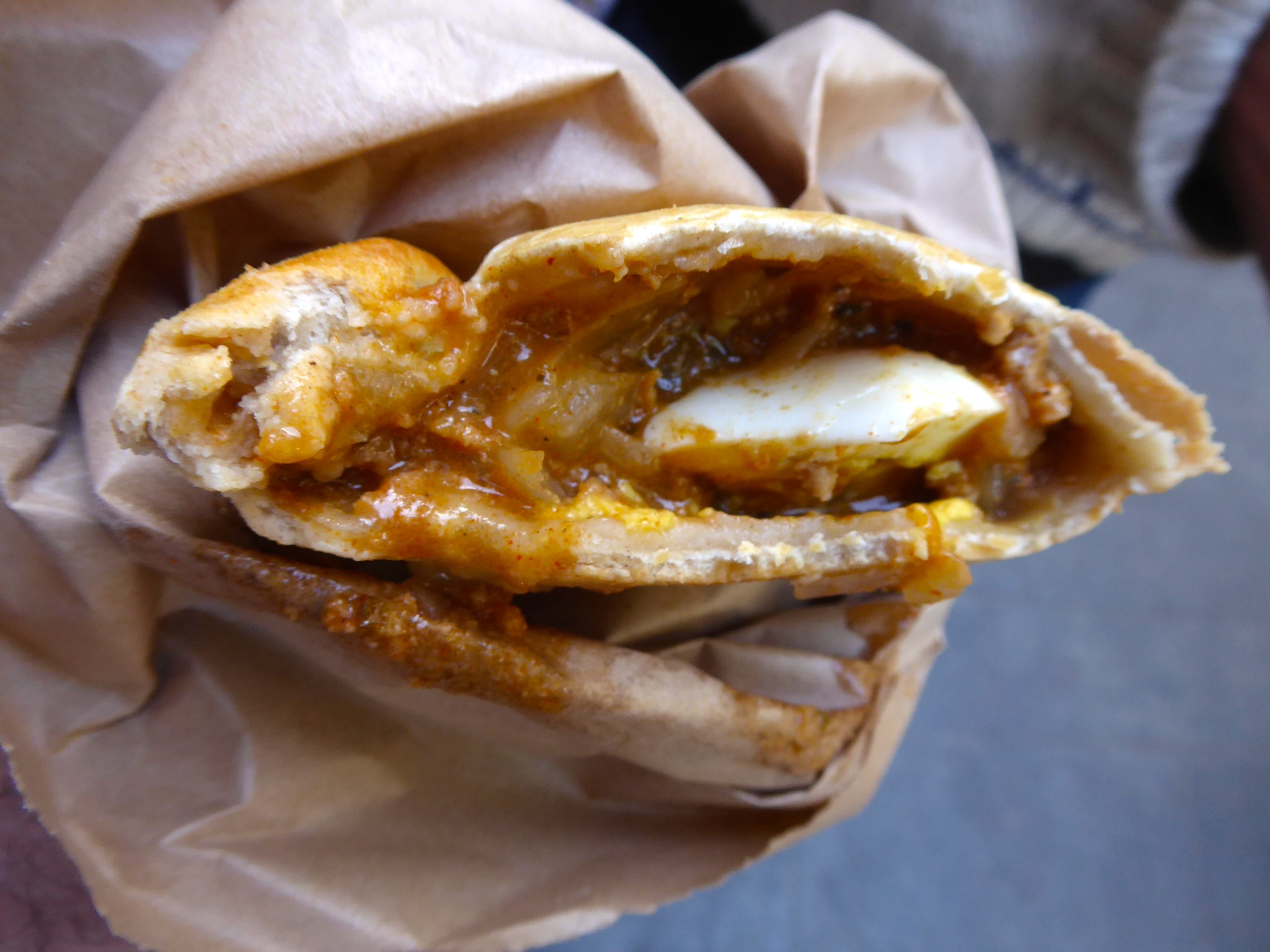 Although most restaurants were closed, we found a nice seafood restaurant up on the hill with a terrific view of the port. Here’s the Inquilino, only a few months old: 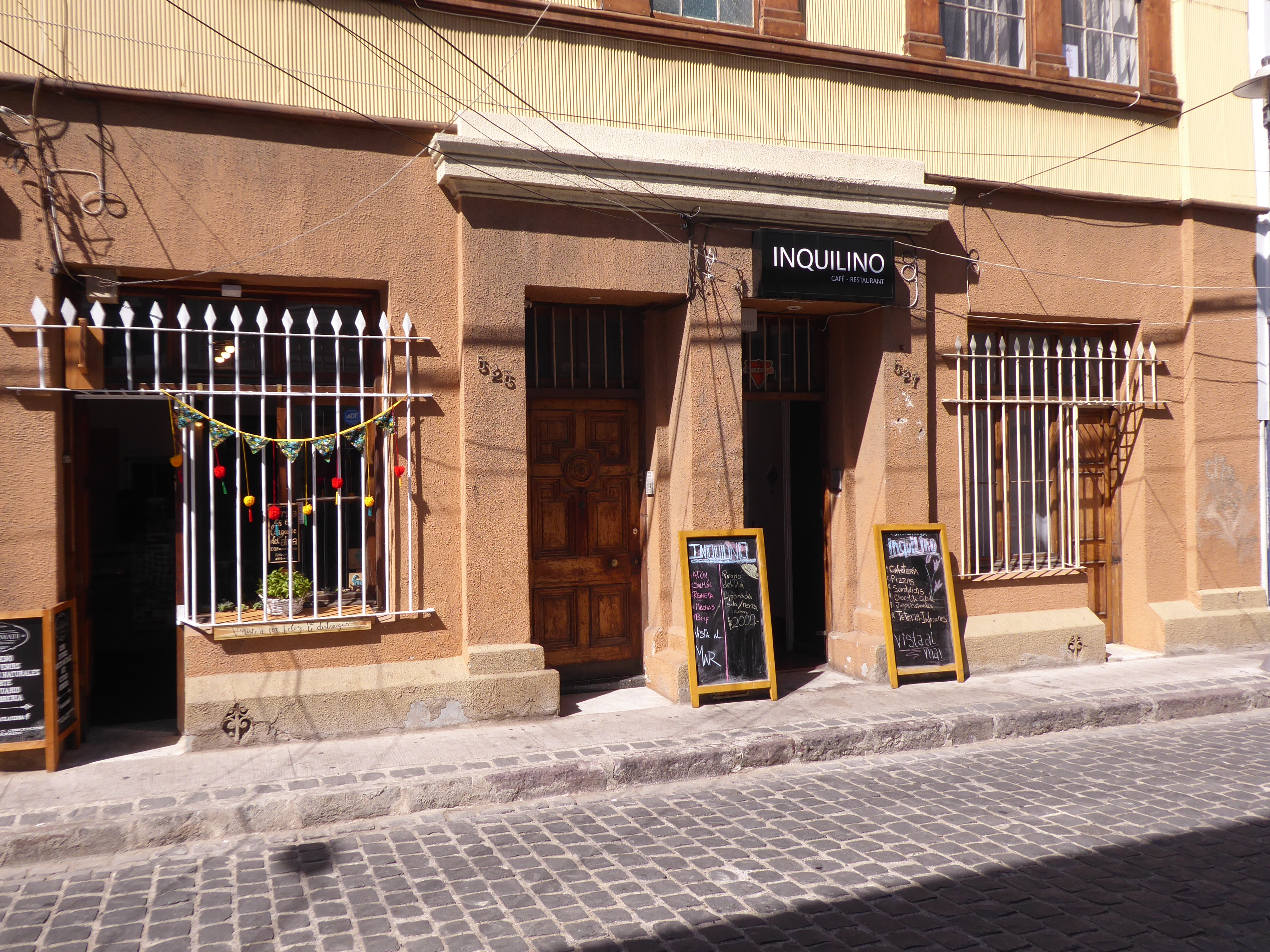 We started with the local drink (also a local drink in Peru), the famous  “pisco sour“, made with pisco (colorless brandy), lime juice, and simple syrup. In Peru they add a beaten egg white to froth it, but I’m not sure they do that in Chile, as ours was sin huevo. 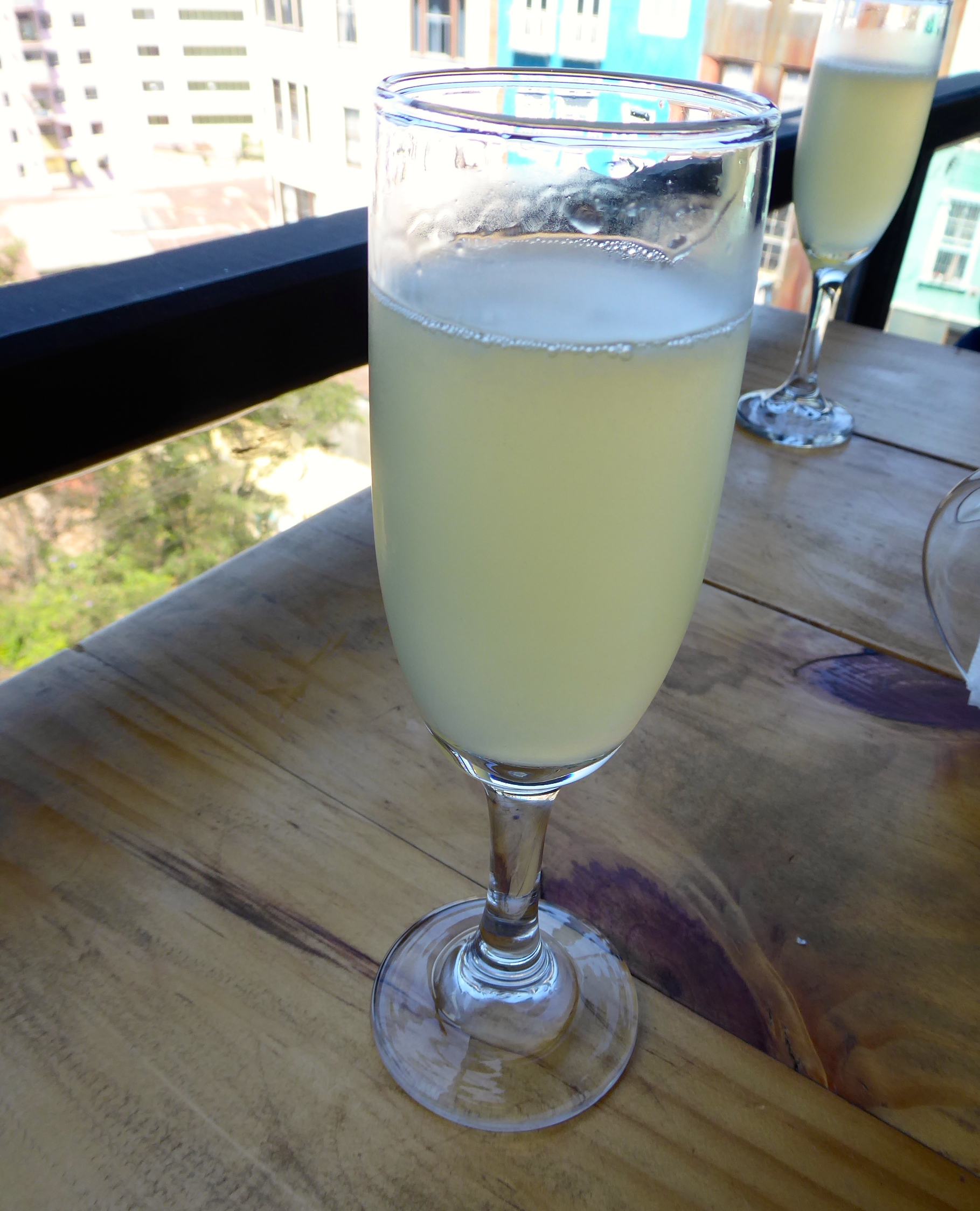 The proprietor gave us, gratis, glasses of the terrific local red, made from a grape I’ve had only once before in my life, Carménère. It’s related to cabernet, and reminded me of a California cab, with a slightly minty and dusty nose. It was fabulous. Chilean wines, especially reds, are famous, but so far this is the only one I’ve tried. Today we’ll have another fish lunch, even though I’m not usually a piscivore. 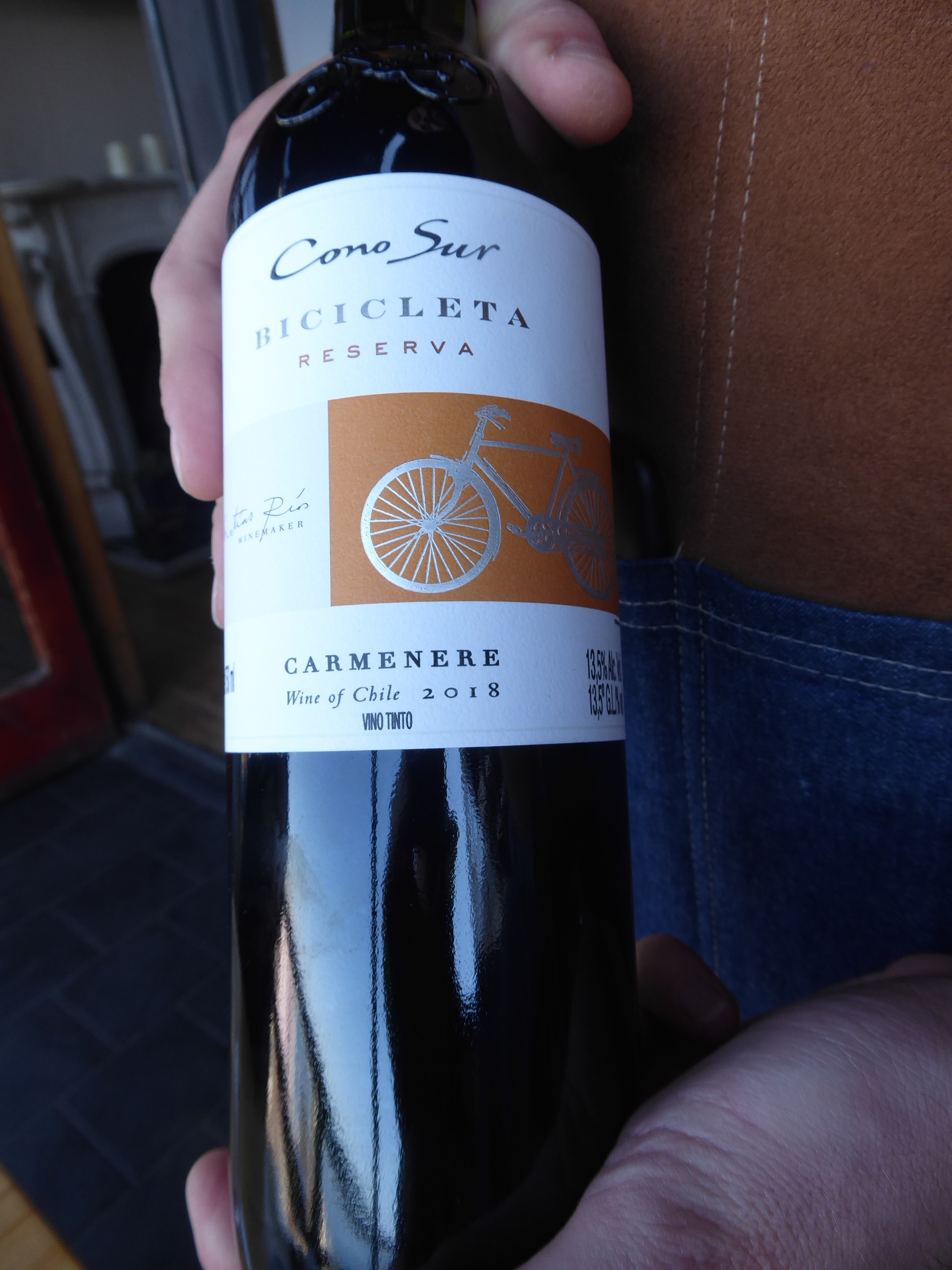 The dishes: fresh seared tuna steak with toasted sesame seeds, served with roasted potatoes, thinly-sliced avocado salad, and a bundle of vegetable spears. The tuna was properly cooked, i.e., slightly and pink. This may have been the best piece of tuna I’ve ever had. 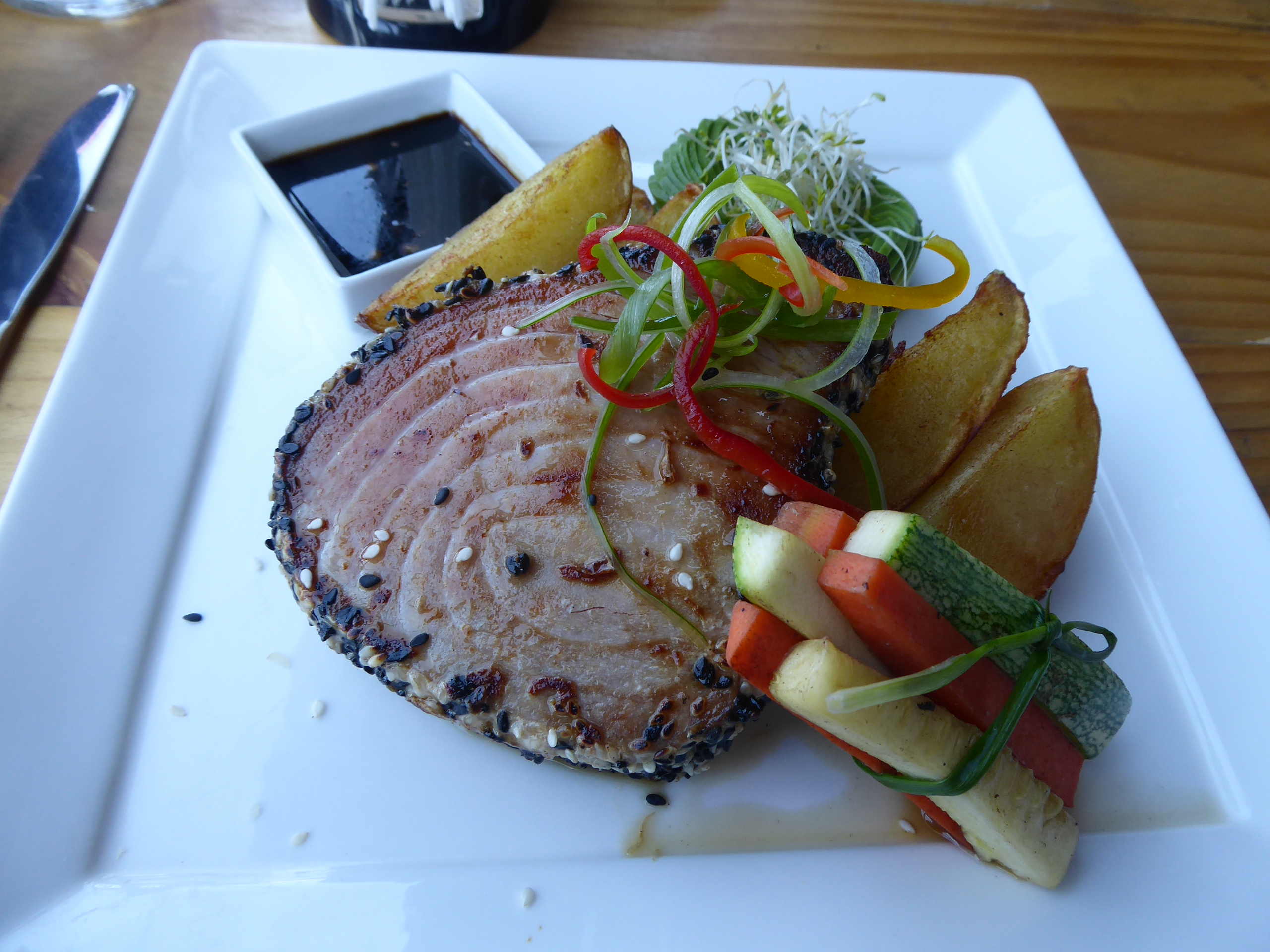 Local Argentinian beef with a wine reduction sauce and mushrooms, served with salad and roasted potatoes. Also washed down with that nice red wine. 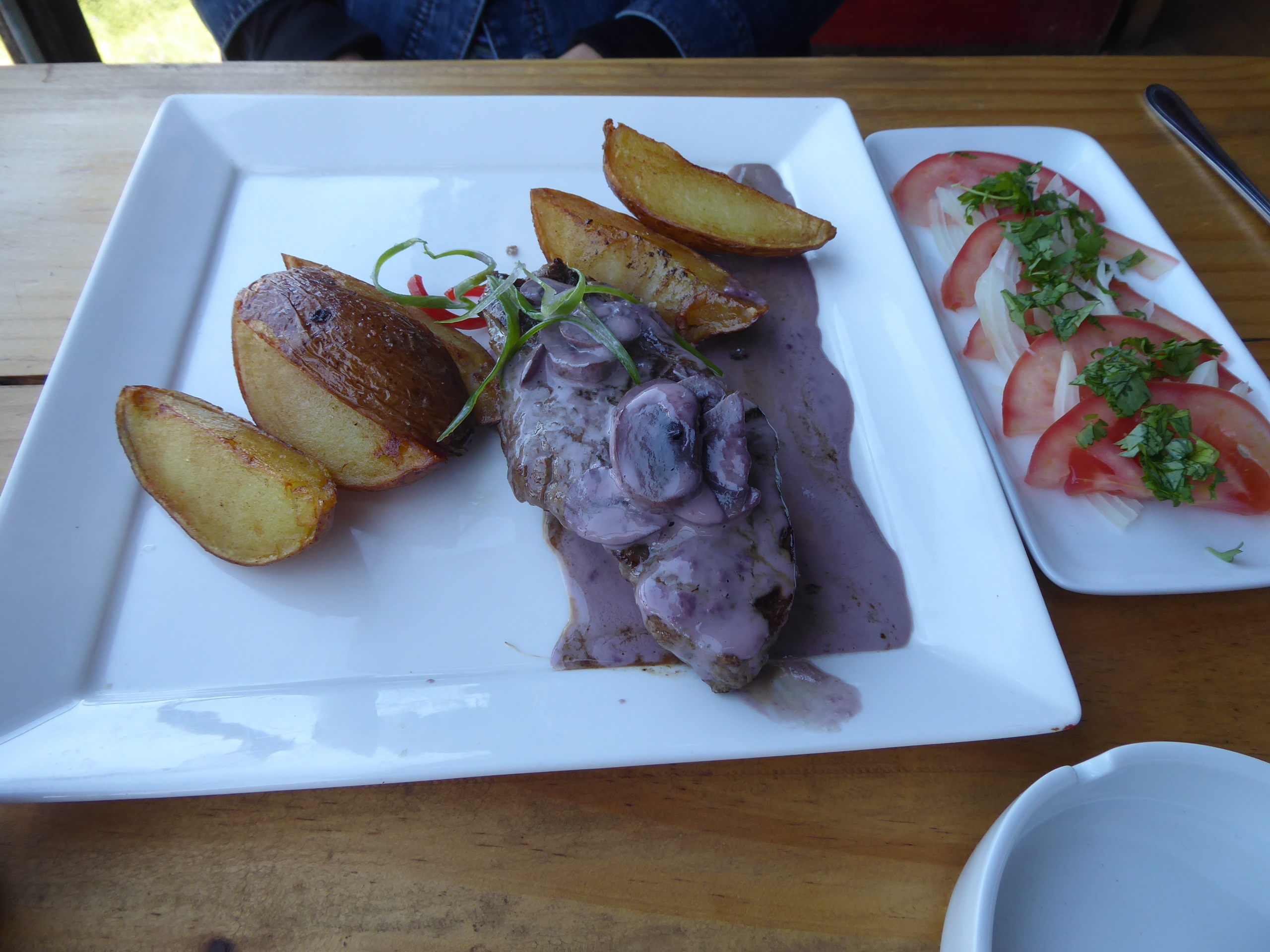 Dining on the terrace overlooking the city: a reflection in the restaurant’s glass: 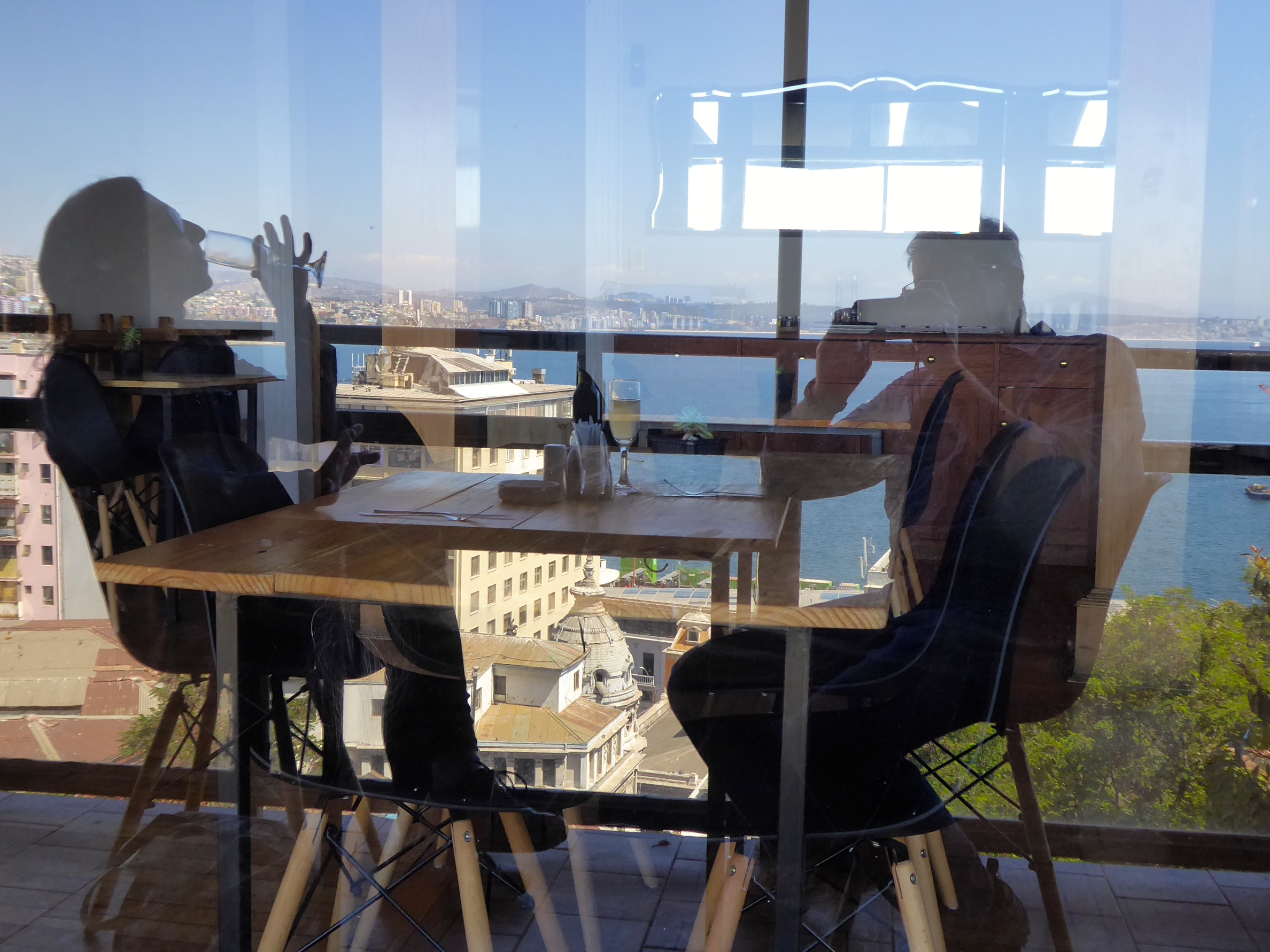 Yes, I am eating nice food while others are protesting, and I feel a tad guilty about it, but we are having only two nice meals here over our five days, so I don’t feel that guilty.

Valparaiso has many stray dogs and cats but, more than any place I’ve ever visited, the locals take care of them. Two days ago I watched a woman walk a stray dog across a busy intersection, hugging it when they made it across. (The cars honked to warn the dog to stay out of the street.) The strays are all pretty plump, and two of them even refused a piece of empanada when we offered it to them yesterday. What kind of stray dog refuses a pastry-encased meat pie with egg? And everywhere people leave out basins of water and bowls of dry food for the dogs.

The cats are not in as good shape, but are still not starving. Here are some of them:

EVERYTHING FOR YOUR CAT (a pet store, but it’s a double entendre, too): 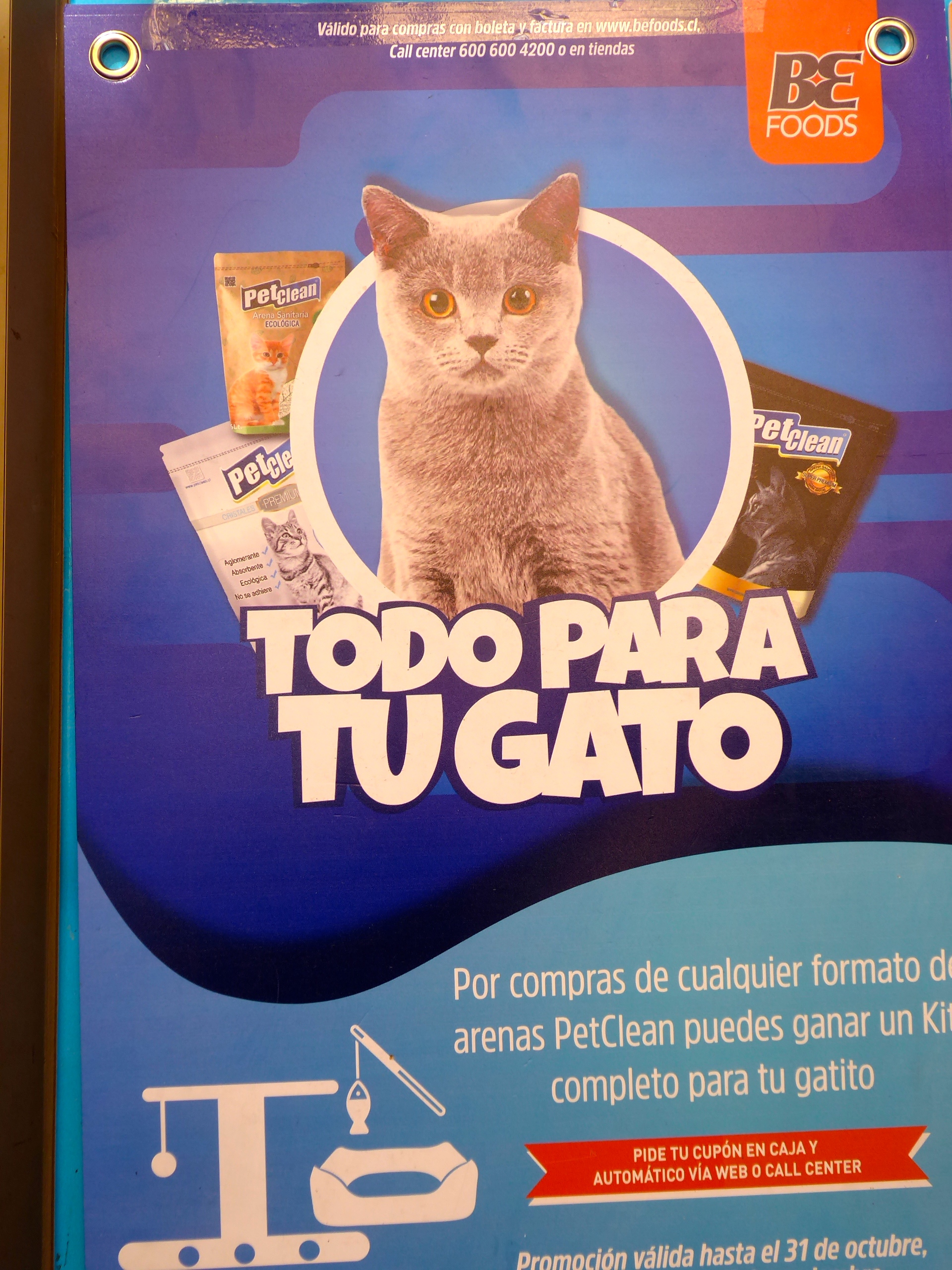 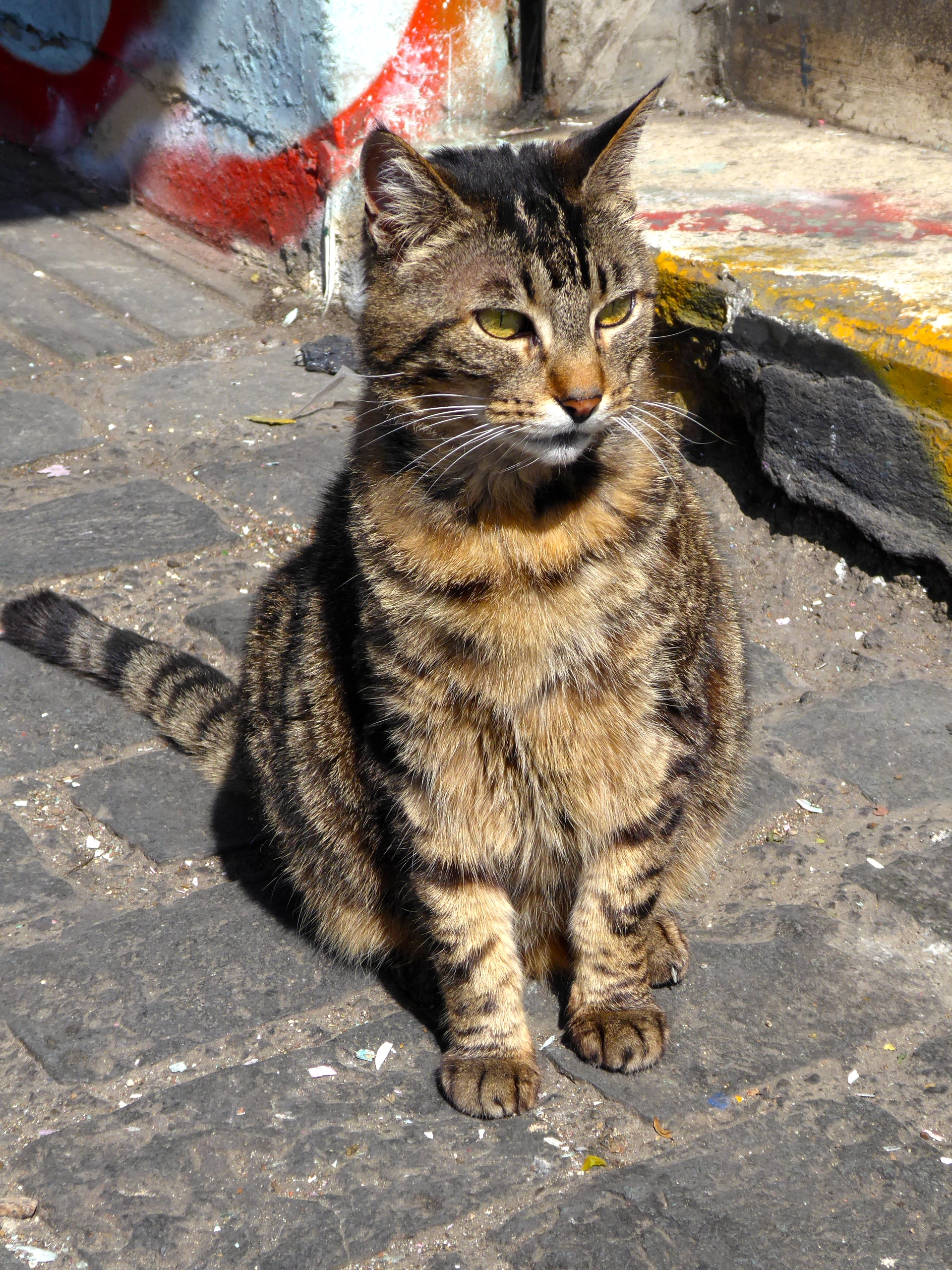 This is a well-serviced cat. Every animal is tame, both cats and dogs, and let you pet them. 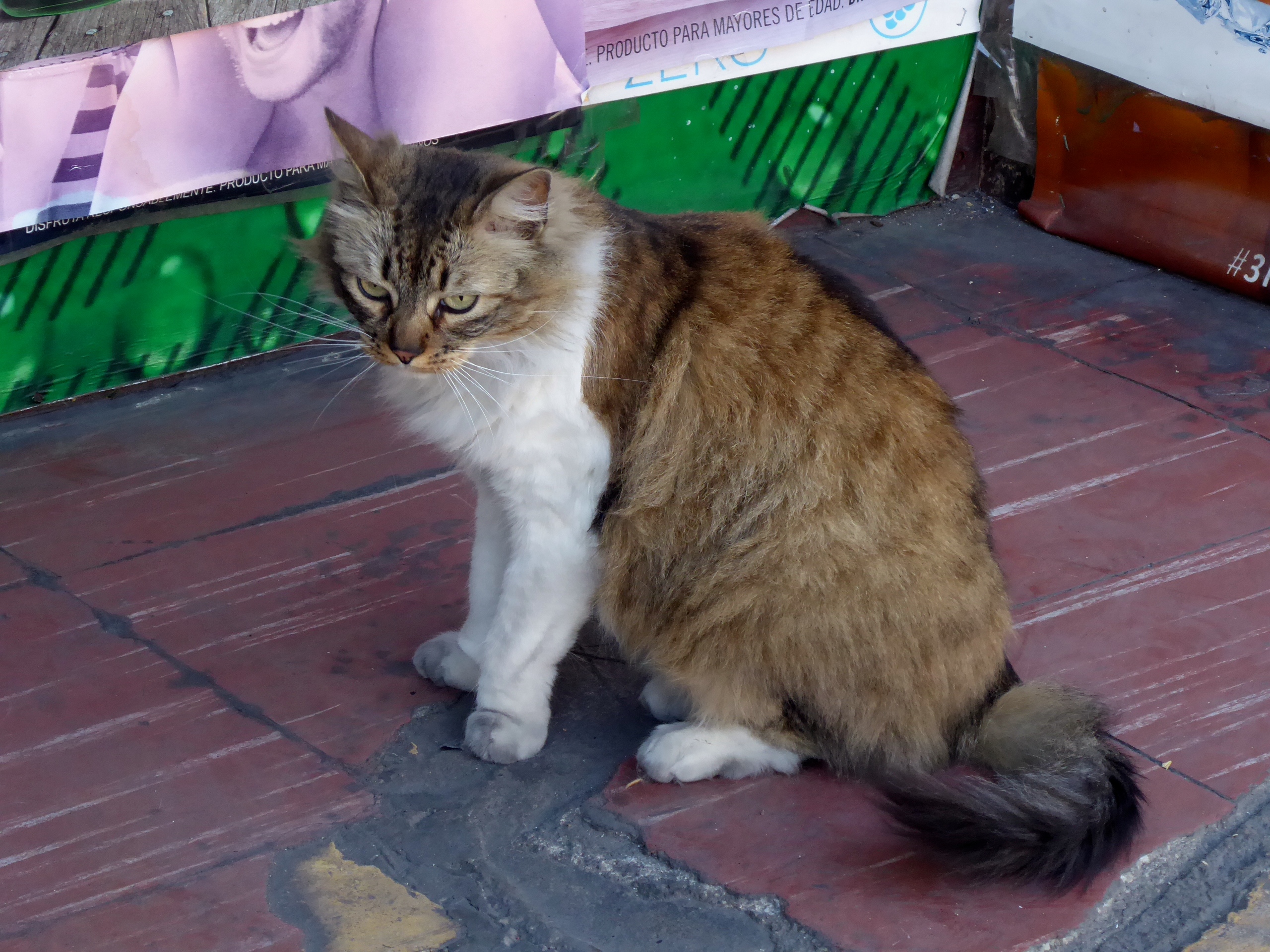 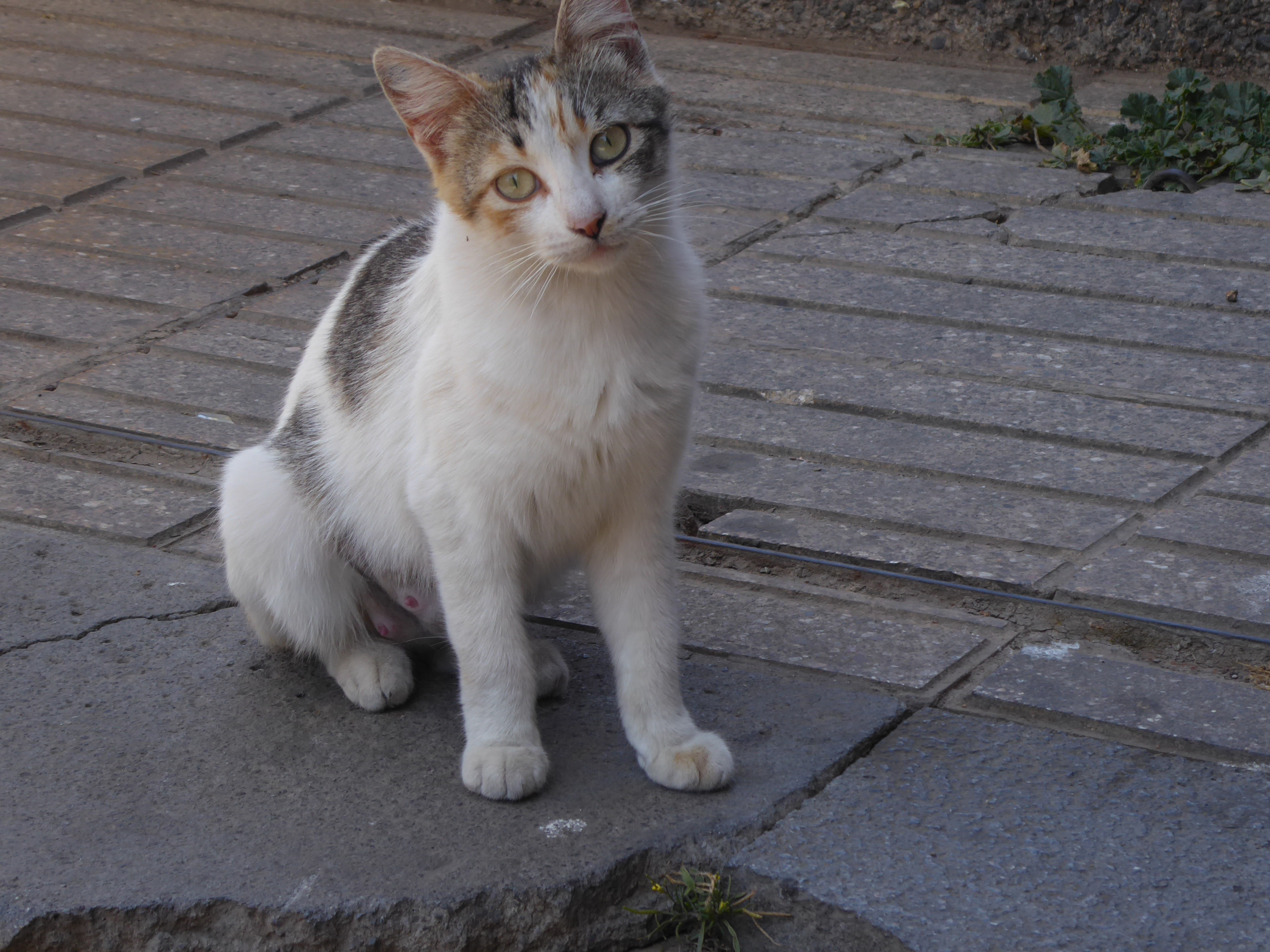 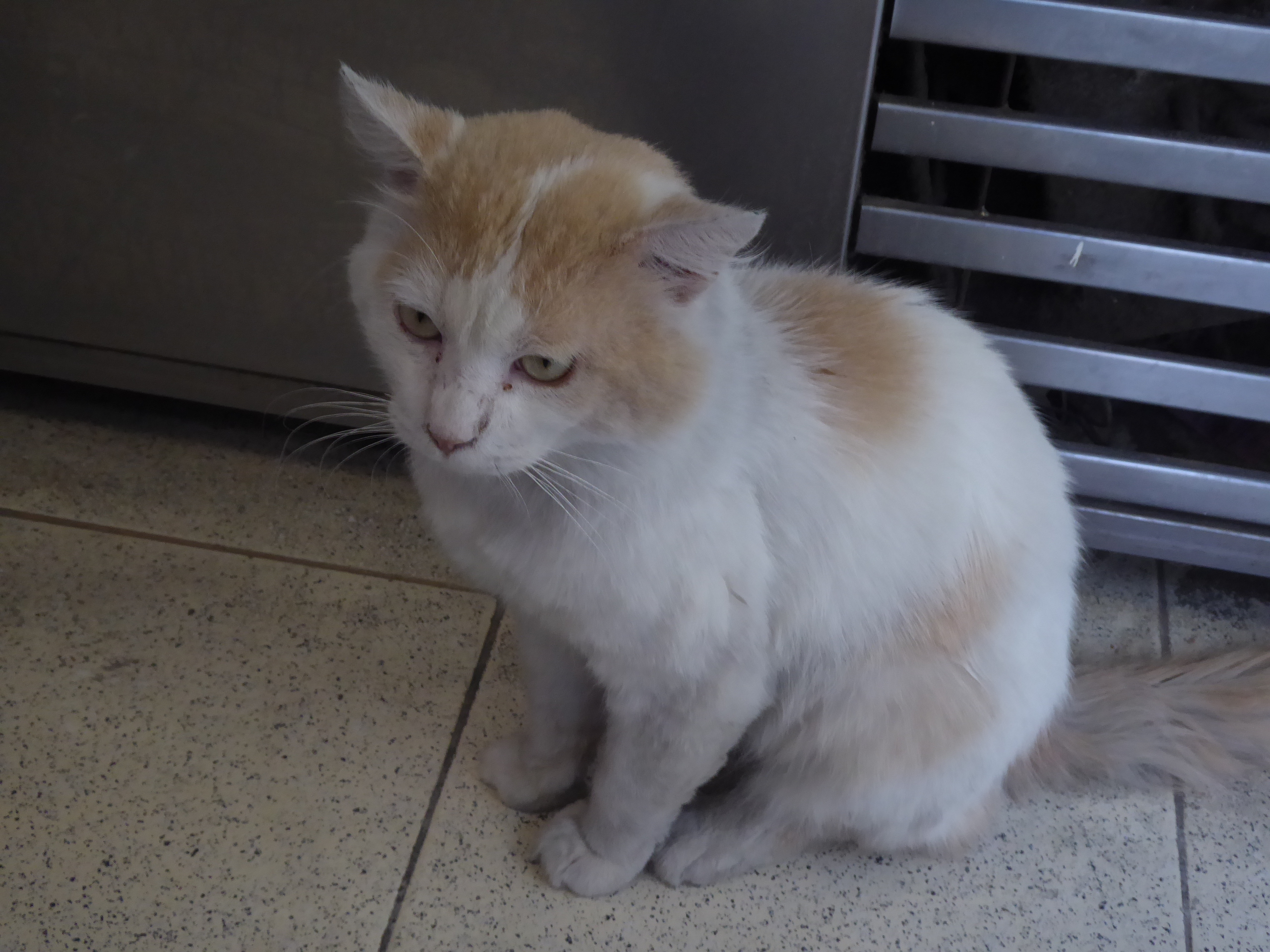 The cat below is someone’s pet, and was sitting on a stool outside a fish store. 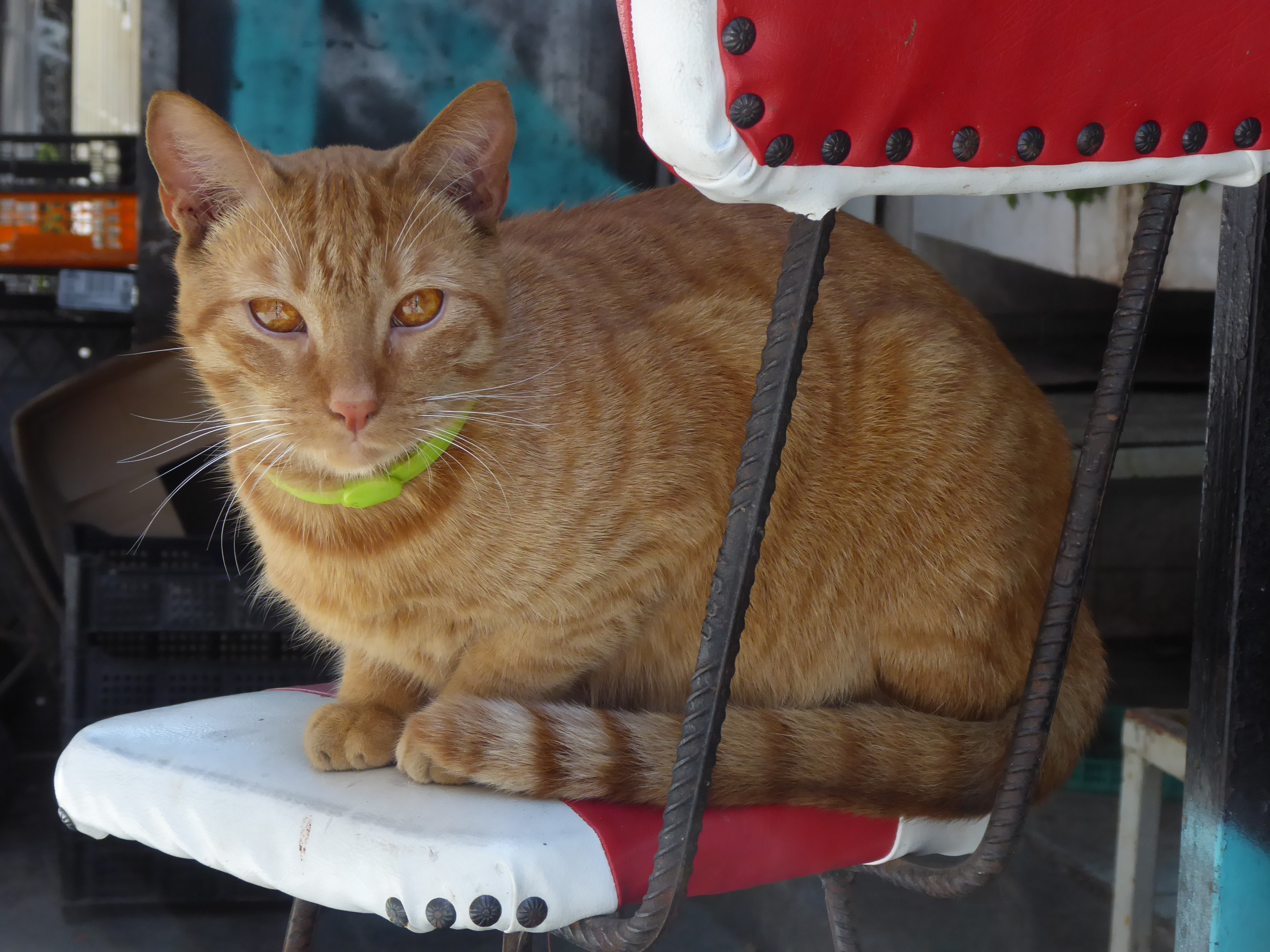 And, since it’s Caturday, this post counts as a Caturday felid post. Sadly, I may miss several of them while on the boat, the first time that’s happened in years.

42 thoughts on “Valparaiso, part 2 (with protests, food, and cats)”