As I reported last week, New School literature professor Laurie Sheck got investigated by her school after using the “n-word” in a discussion about James Baldwin. In particular, she was discussing why, although Baldwin said the phrase “I am not your nigger” on the Dick Cavett show, a 2016 documentary about his life changed the phrase to “I Am Not Your Negro” (the original phrase, though, is flashed on the screen at the end of the documentary). Sheck read the phrases, and then asked her graduate students to discuss what the change of wording might signify.

Indeed, other scholars like Talia Marshall and Max Gordon (discussed in the FIRE letter mentioned below) had already written about this wording change, using both “nigger” and “Negro”, and raising the issue of why one n-word became another.

This discussion was absolutely relevant to the reading at hand, and yet two students (at least one of them white) objected to Sheck’s use of the “n-word”, one saying that white people were never supposed to use the word under any circumstances. As my previous post reported, the students reported Sheck to her university for “racial discrimination”, and she was forced to meet with university investigators.

While the word in question can indeed be used as a racist slur, it wasn’t in Sheck’s case. This was an instance of an appropriate use of a loaded word in the cause of discussion—an issue of academic freedom.  There was not the slightest evidence that any discrimination was in play. The Foundation for Individual Rights in Education (FIRE), wrote a long and meticulously documented letter to the President of the New School, urging them to drop their ridiculous investigation (I’d urge you to read it if you have time.) Besides violating academic freedom, FIRE claimed, the New School was violating its own principles, which say that:

The New School, since its beginnings, has endeavored to be an educational community in which public as well as scholarly issues are openly discussed and debated, regardless of how controversial or unpopular the views expressed.

But, mirabile dictu, the New School finally exonerated Sheck, though she should never have gone through this trial in the first place.  FIRE reports the outcome in its post below (click on screenshot): 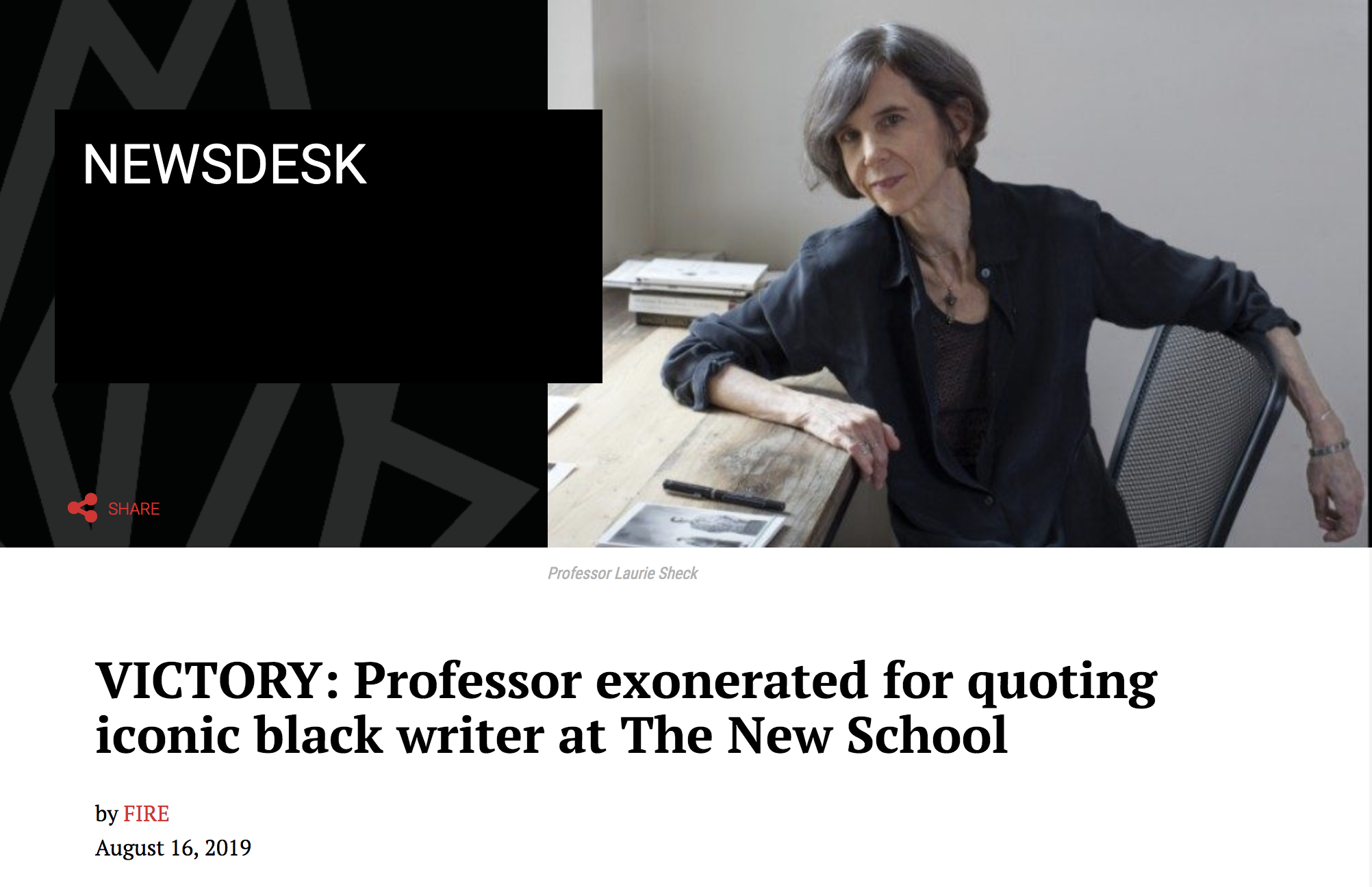 Here’s the New School’s letter to Sheck from the school’s Director of Labor Relations (pdf here): 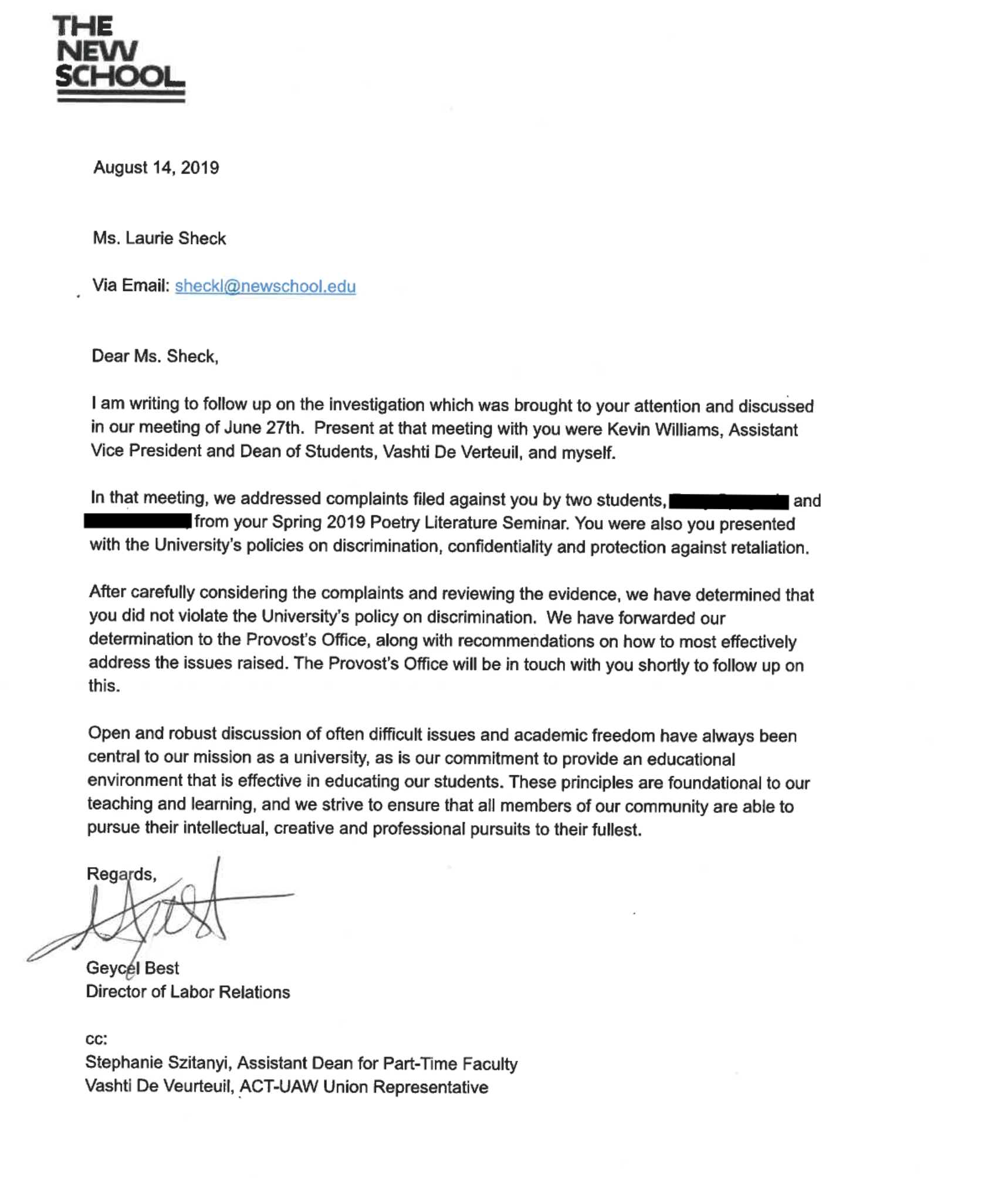 So we have a favorable outcome, though I am a bit worried about what Director Best means when he wrote, “We have forwarded out determination to the Provost’s Office, along with recommendations on how to most effectively address the issues raised. The Provost’s Office will be in touch with you shortly to follow up on this.”

Does this mean that Sheck is going to receive further paternalistic advice about how she should avoid using the word and offending students? I hope not. For the ability of students to start a disciplinary proceeding—based on the appropriate use of a word in an appropriate classroom discussion—will have a chilling effect on professors who want and need to discuss controversial issues, especially issues about race, gender, and ethnicity. Remember, no professor wants to lose their job, so it’s better to play it safe and cater to the Speech Police.