Because of his extraordinary and information-packed posts on bird research (mostly his), Bruce Lyon has now been appointed our Official Website Ornithologist™, though he’s really a professor of ecology and evolution at the University of California at Santa Cruz. Here’s his latest post—on pygmy owls—and his commentary is indented. Did you know that some owls have fake eyespots on the back of their heads?

Here is another post about owls, one of my favorites, the pint-sized Northern Pygmy Owl (Glaucidium gnoma). It is fairly common in coniferous forests (especially pines and Douglas fir) in western North America but can be hard to see. At 60 grams, it is slightly smaller than an American Robin but the small size should not fool anyone. This is a serious bird killer—mostly songbirds, but they sometimes take down birds much larger than themselves, with exceptional records of quail and even mammals as large as red squirrels. They often take prey that are too big to fly with so they have to consume the prey on the spot. Rodents and lizards round out the diet.

The ferocity of pygmy owls has long been appreciated. Arthur Cleveland Bent, who wrote the first detailed life history accounts for North American birds, described the pygmy owl as “blood-thirsty, rapacious . . . fiend . . . from the top of its gory beak to the tips of its needle-like-claws.”  It sometimes hangs around bird feeders picking off the songbird visitors. Cooper’s and Sharp-shinned Hawks do the same. Henry Horn, a professor where I went to grad school, jokingly referred to bird feeders visited by raptors as ‘two trophic level bird feeders’—the seeds feed the seed-eating birds and the seed-eaters feed the raptors.

Below: Here is the bird killer in all of its glory. We found it in Del Puerto Canyon, Stanislaus County California, but they also occur very close to my home in Santa Cruz (they are heard more than seen). We heard this bird calling and eventually tracked it down—tooting away in the top of tree. 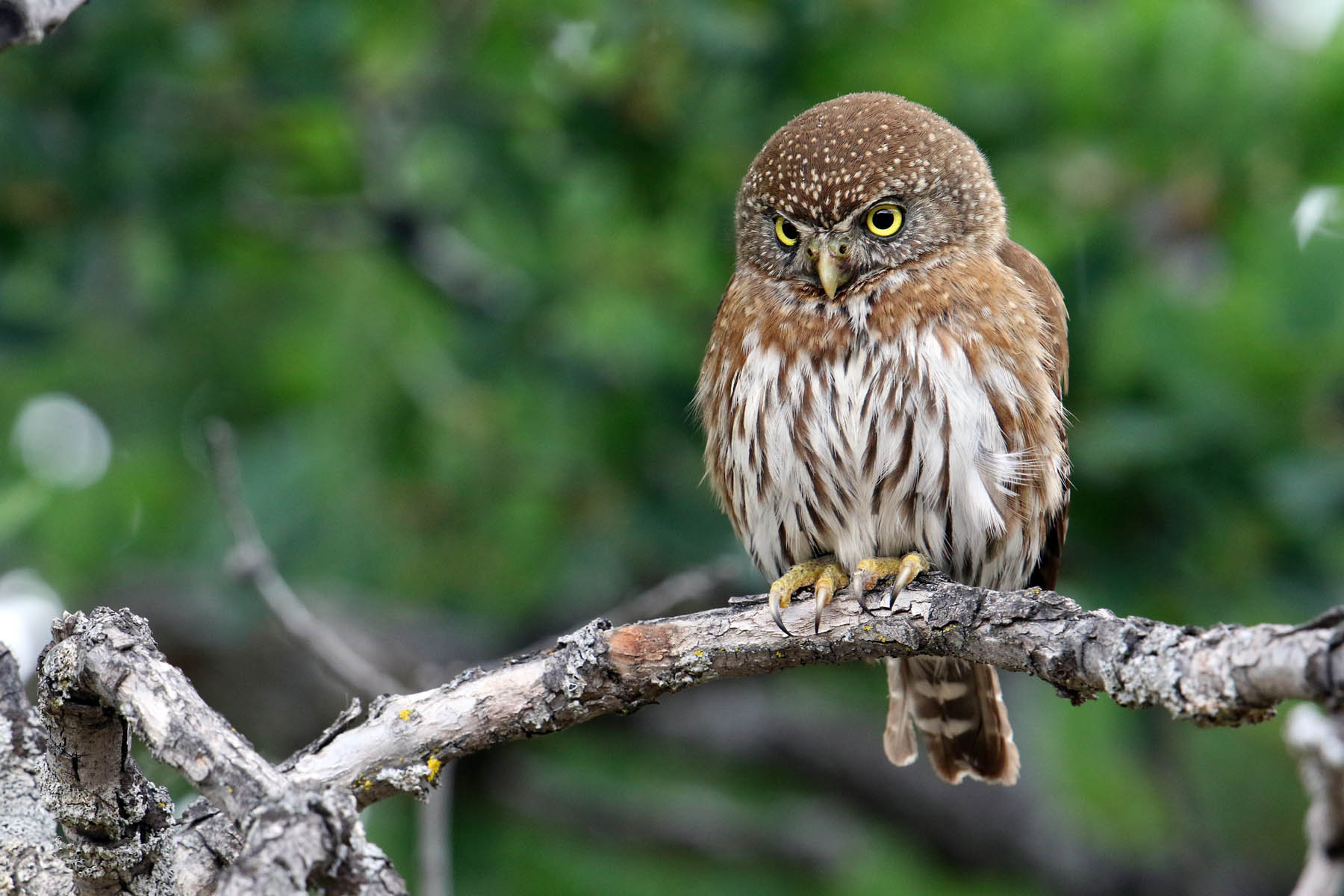 Below: Another photo of the same bird. 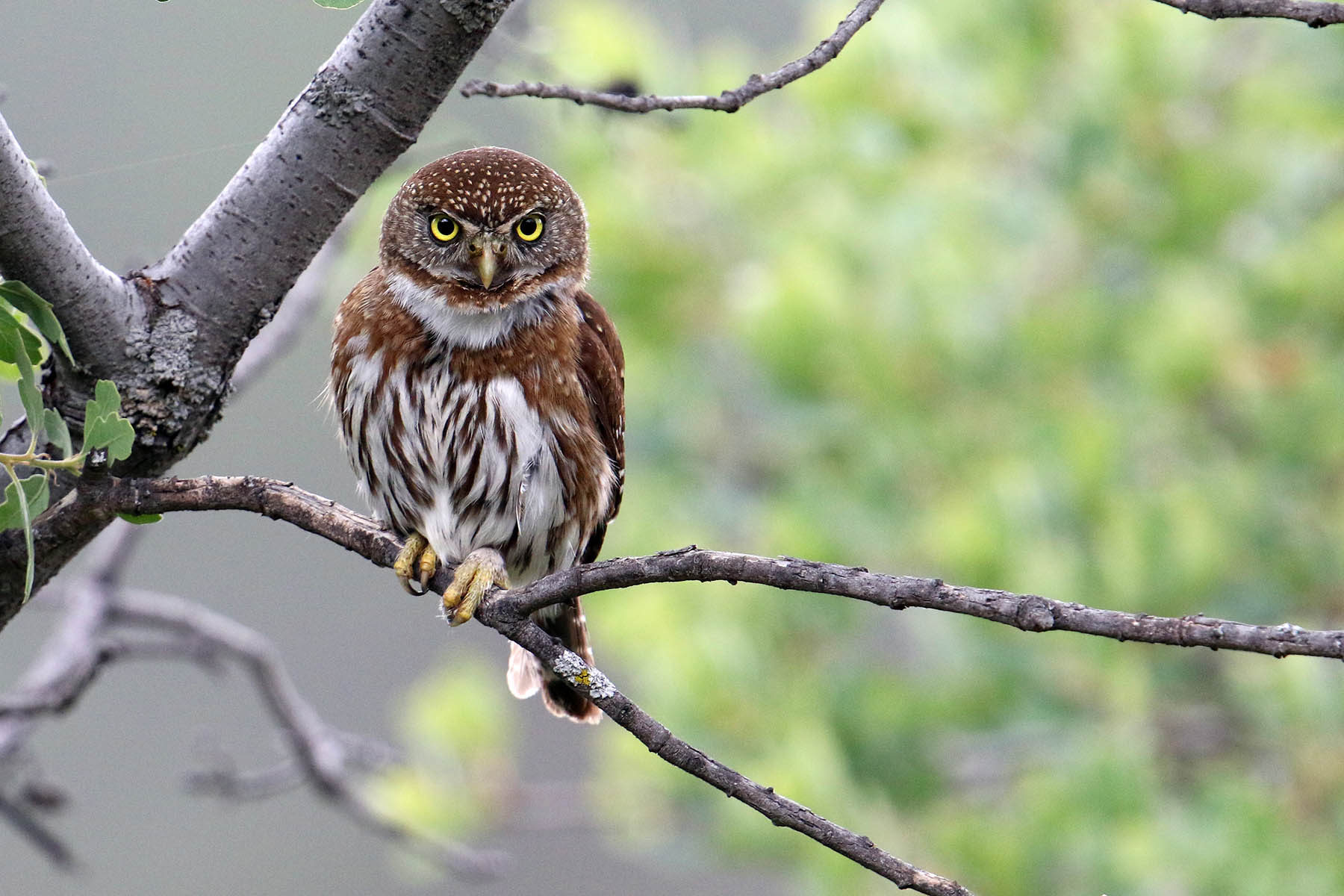 Given the threat that pygmy owls pose to small birds, songbirds often enthusiastically mob pygmy owls. Even an audio playback of owl toots can bring in a group of excited mobbers. When the first bird discovers an owl, it gives off a mobbing call that functions to recruit other mobbers to the scene. Our owl was being mobbed by several birds, including Oak Titmice, Bewick’s Wrens, Violet-green Swallows, Ash-throated Flycatchers, and Anna’s Hummingbirds. The photo below shows an Anna’s Hummingbird about to buzz the perched owl. We had hoped to get really nice photos of the mobbing, but the damn mobbers always perched just outside the photo. Mobbing is interesting in its own right, so I will send a future posting about it. 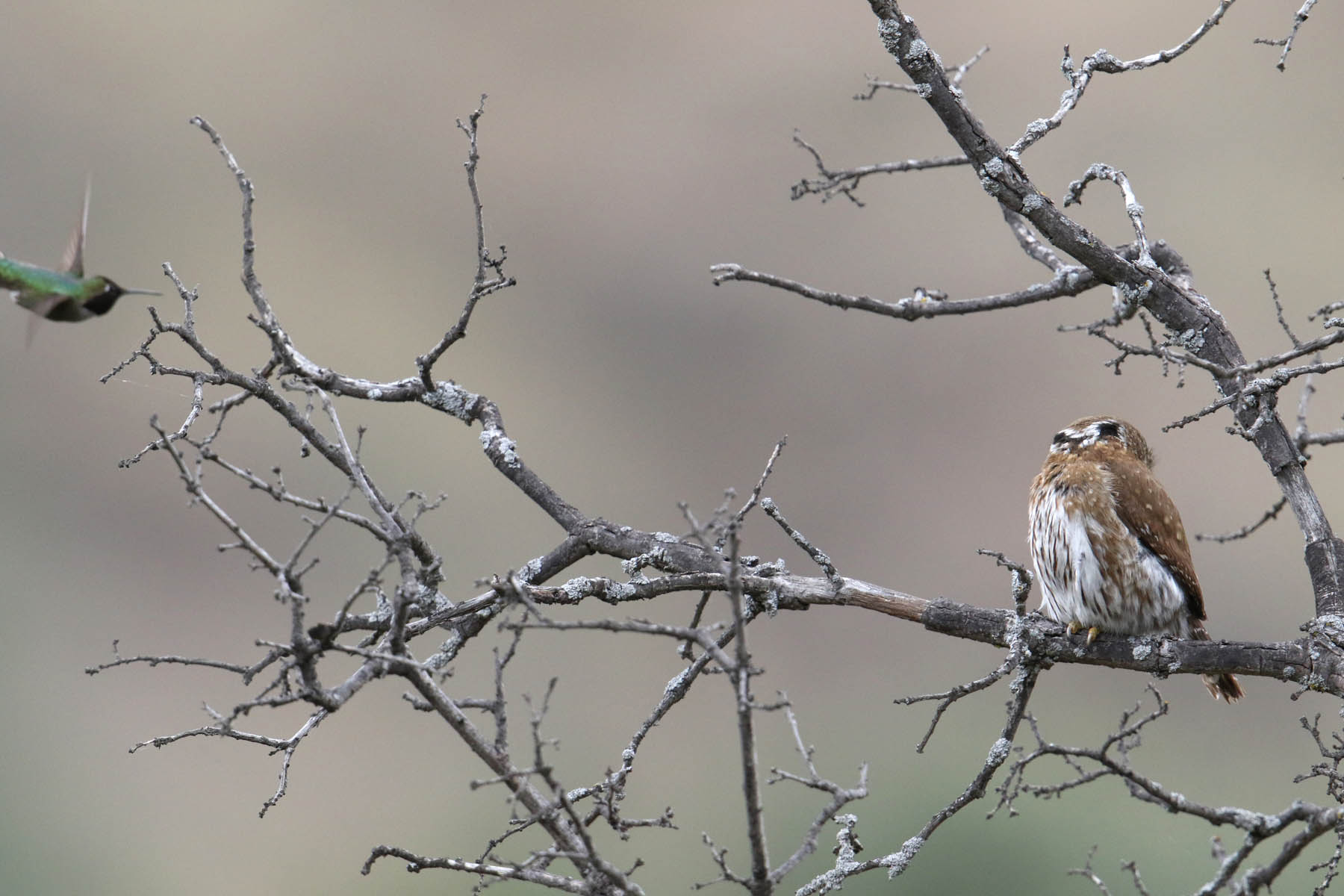 Below. Video of the tooting owl. A small owl with a high-pitched toot seems cute to us but this tooting is harbinger of death to small songbirds.

Some mobbing birds will actually strike the predators, typically attacking from behind. Pygmy owls, along with other small raptors like American kestrels, have a trait that appears to have evolved to reduce the risk of strikes from behind—plumage markings on the back of the head that resemble eyes. The two photos below show the front and back of the head. This bird had really distinctive fake eyes—they are not always so clear. 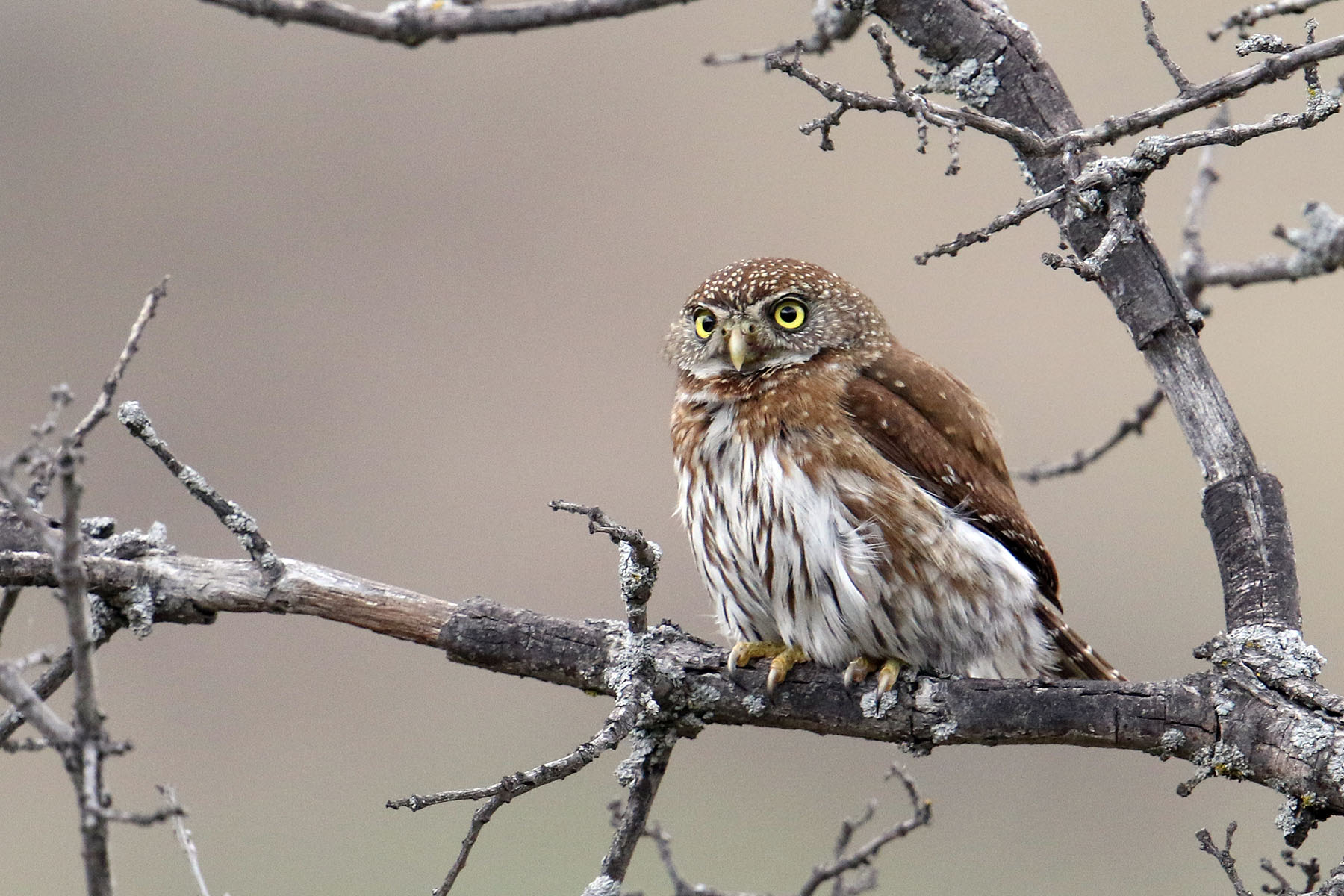 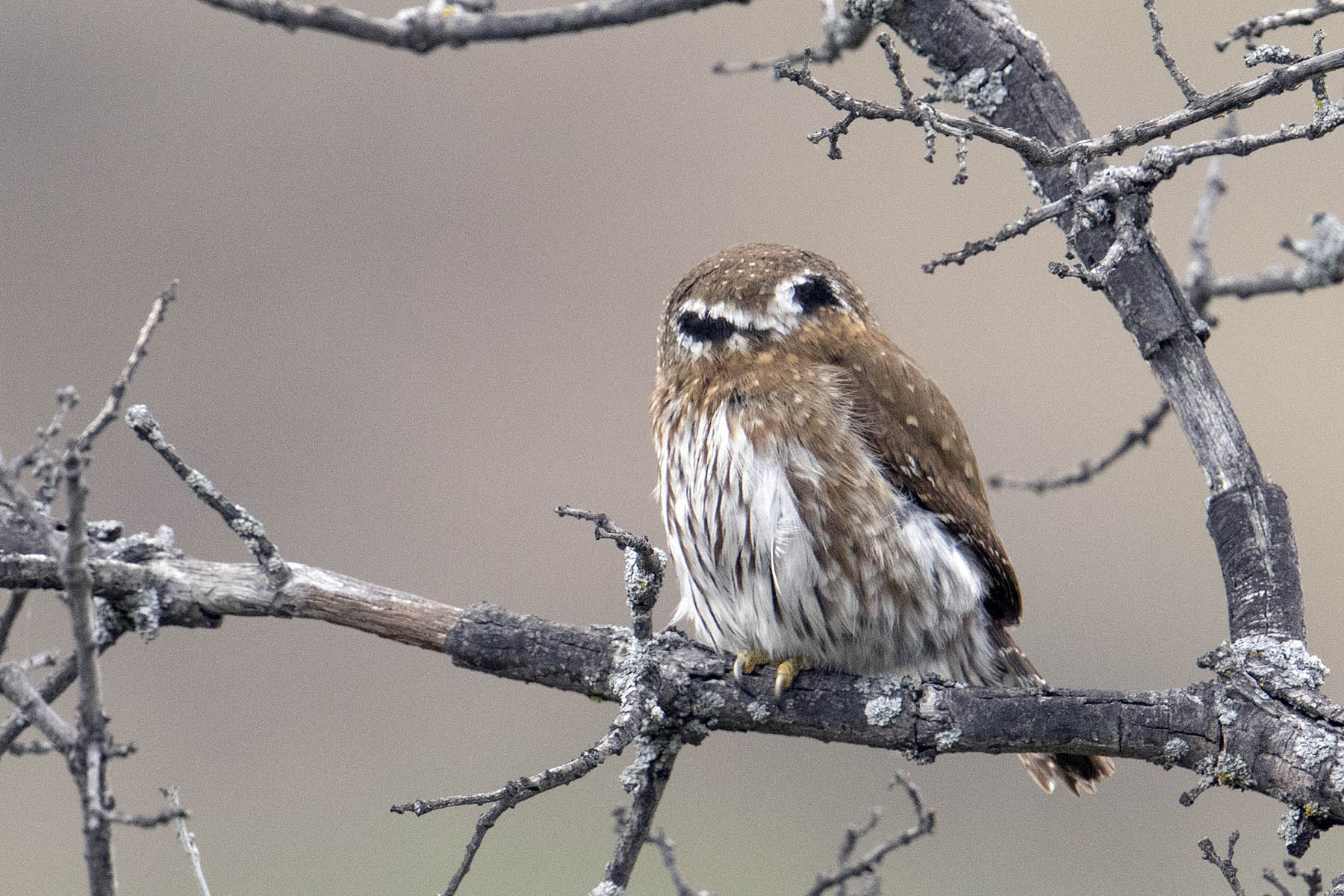 Below: One idea for why pygmy owls and other small raptors (and even cats like bobcats) have fake eyes on the back of their head (or ears for cats) is that the eyes reduce the risk that mobbing birds strike them from behind. If birds attack and strike from behind, fake eyes work by the appearance of all sides having a face, which should reduce strikes. A clever study tested this idea with balsa wood pygmy owls, one with fake eyes and one without. The authors placed the models conspicuously on branches in pygmy owl habitat near Missoula Montana and used audio playbacks of pygmy owl toots to recruit in mobbing songbirds. They scored the responses to the two different models and found that the model with the fake eyes had fewer close approaches from the rear. 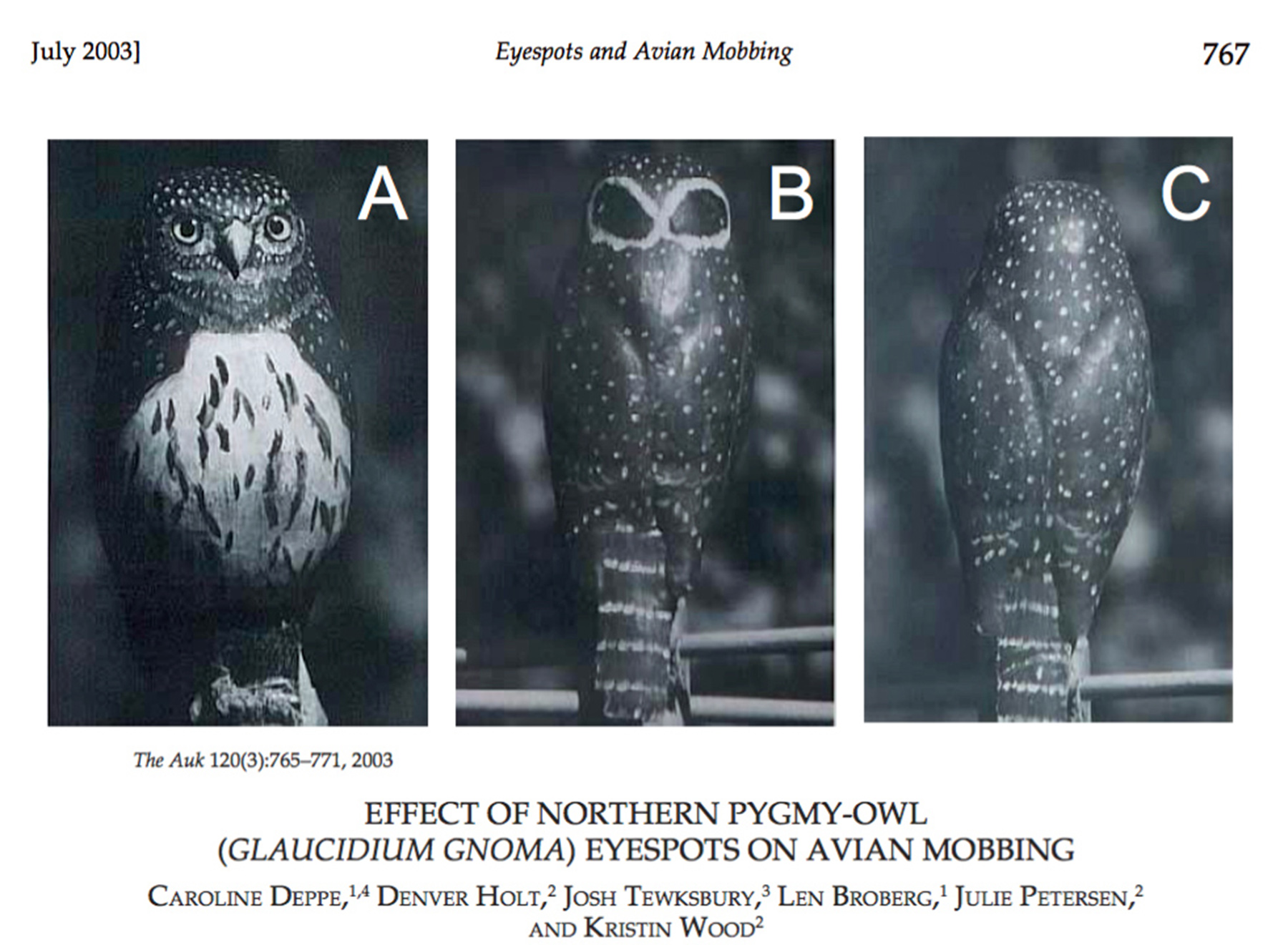 Below: People have adopted the fake eye ruse too, but it seems not as effective over the longer term as the owl eyes.  There are places in south India where tigers (Panthera tigris) kill a lot of people (up to 60 per year in a fairly small area), such as the coastal Sundarban swamps. Apparently, tigers typically strike from behind so people began wearing masks with eyes on the back of the head to reduces the risk of attacks. According to Wikipedia this worked for a while but then the tigers figured the deception out and started preying on people again (photo ‘borrowed’ from the web).

I love watching pygmy owls because of the mobbing and alarm calls they incite. Even a playback of owl toots is enough to bring in birds, and this has been used to study mobbing behavior. A study of the Eurasian Pygmy Owl (Glaucidium passerinum)used owl playbacks to figure out if species vary in their mobbing response in relation to their risk of being preyed on. The authors used the literature to determine how likely a species is to be taken by a pygmy owl. They found that species that are never preyed on by the owls did not respond to toots, birds that are occasionally eaten showed a modest response, and species that are frequently eaten went ballistic. It makes sense that mobbing intensity reflects mortality risk. Their authors were also able to reject the long–standing hypothesis that mobbing is mostly about protecting vulnerable chicks in the breeding season—the authors found the same pattern in spring and in winter.

Bird alarm calls contain information about predation risk. When an attacking predator is on the move and there is a risk of being taken, birds use a high frequency alarm call—the high frequency makes it hard for the predator to locate the caller. In contrast, when birds are mobbing a perched predator, they give harsh calls that are easy to locate. This makes it easy for other birds to find the location and join the fun. The information in alarm calls goes beyond this simple “run for your life” versus “let’s gang up this bad guy” dichotomy. Two friends of mine, Chris Templeton (Pacific University) and Erick Greene (University of Montana), teamed up with a Kate Davis, a raptor person, to conduct a neat study of whether birds include information about the type of predator in their alarm call. Davis founded and runs Raptors of the Rockies, an education and conservation organization. The study took advantage of her many captive raptors and used live raptors in an aviary setting to see if Black-capped Chickadees (Poecile atricapillus) vary their mobbing calls for different predators. It turns out that the body size of the predator is key: for the small owls that are likely to eat them, including pygmy owls, the chickadees include more ‘dee’ syllables per call (see graph below from the paper). Alarm calls for large raptors that are mostly too big to pose much of a threat contain fewer dee syllables. The paper can be downloaded for free from Templeton’s website: 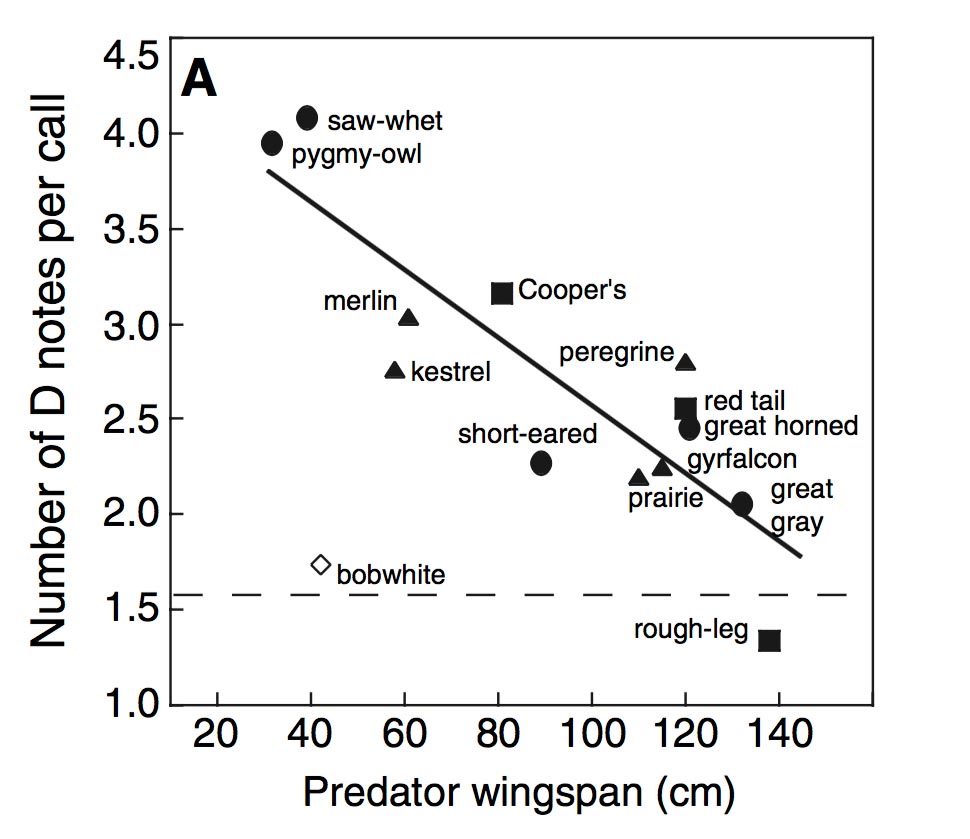 Below: Pygmy owls nest in cavities in trees, most often old woodpecker cavities. On a birding trip to Arizona this spring, we heard a pygmy owl tooting away but could not find it. After a couple of minutes somebody realized it was calling from a nest cavity right over our head. Their calls can be really hard to locate. 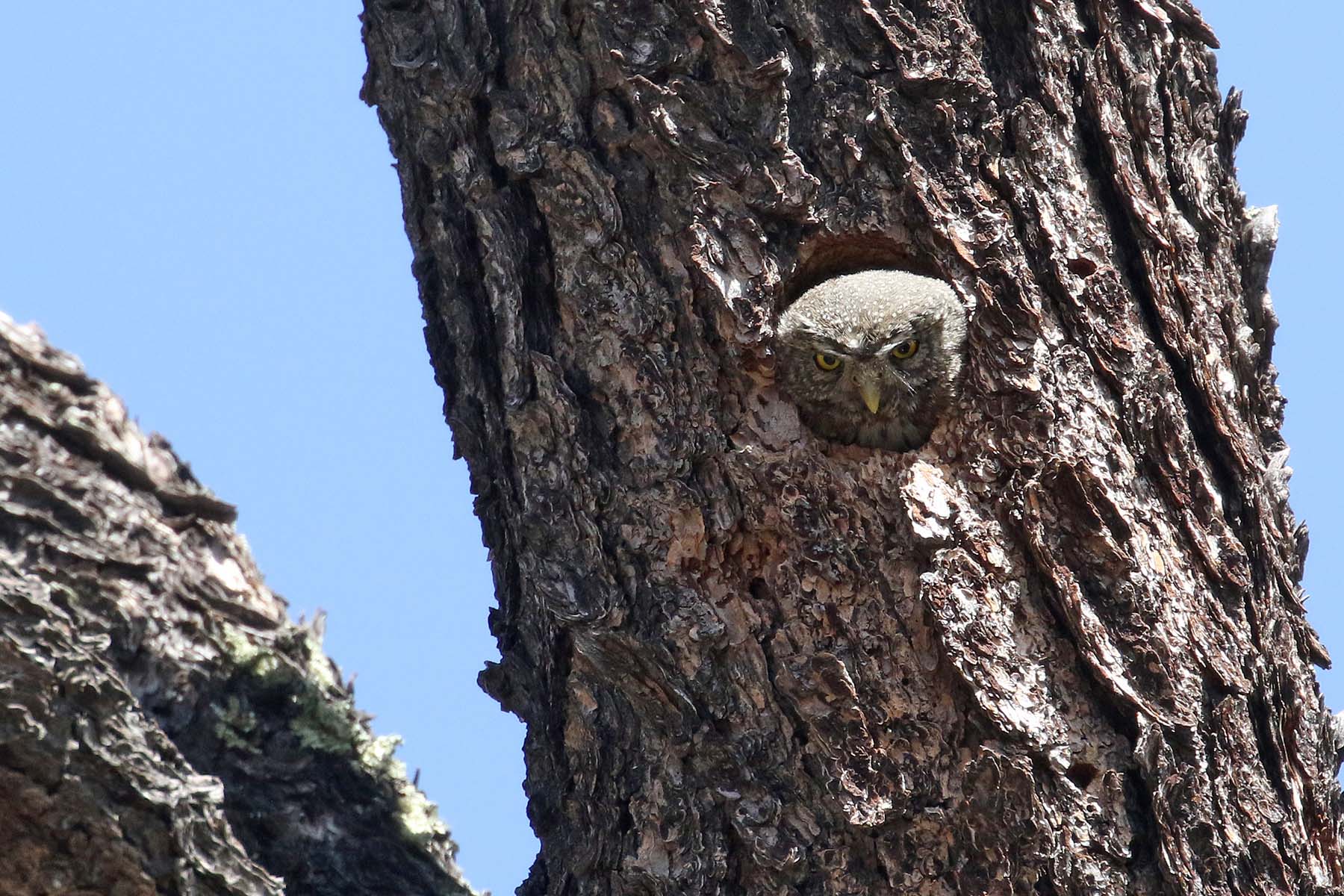 The photo below shows a rare photo of a pygmy owl inside its nest. The photo was taken with a nest camera on a pole pointing directly down from the nest hole to the bottom of the cavity, where the little owl is peering up, with some of her eggs showing. Like all owls, pygmy owls have white eggs. The photo was taken by Eric Walters and Walt Koenig, who are studying Acorn Woodpeckers at Hastings Reserve in the Carmel Valley of California.  This is a very long-term study (population continuously studied since 1974!) and each year the researchers check a large number of old woodpecker holes to look for active woodpecker nests (the woodpeckers often reuse old nest cavities). Recently they began using nest cameras on long poles to check cavities (to reduce the risk of researchers falling 60 feet to their deaths) and last year they got a big surprise—they found three different pygmy owl nests in old acorn woodpecker cavities. This is particularly surprising because they have been checking cavities for many years and never had any pygmy owls nests before. This suggests that a bunch of owls moved into the area, perhaps to capitalize on a local abundance of some prey item. Other species of owls sometimes do this too. 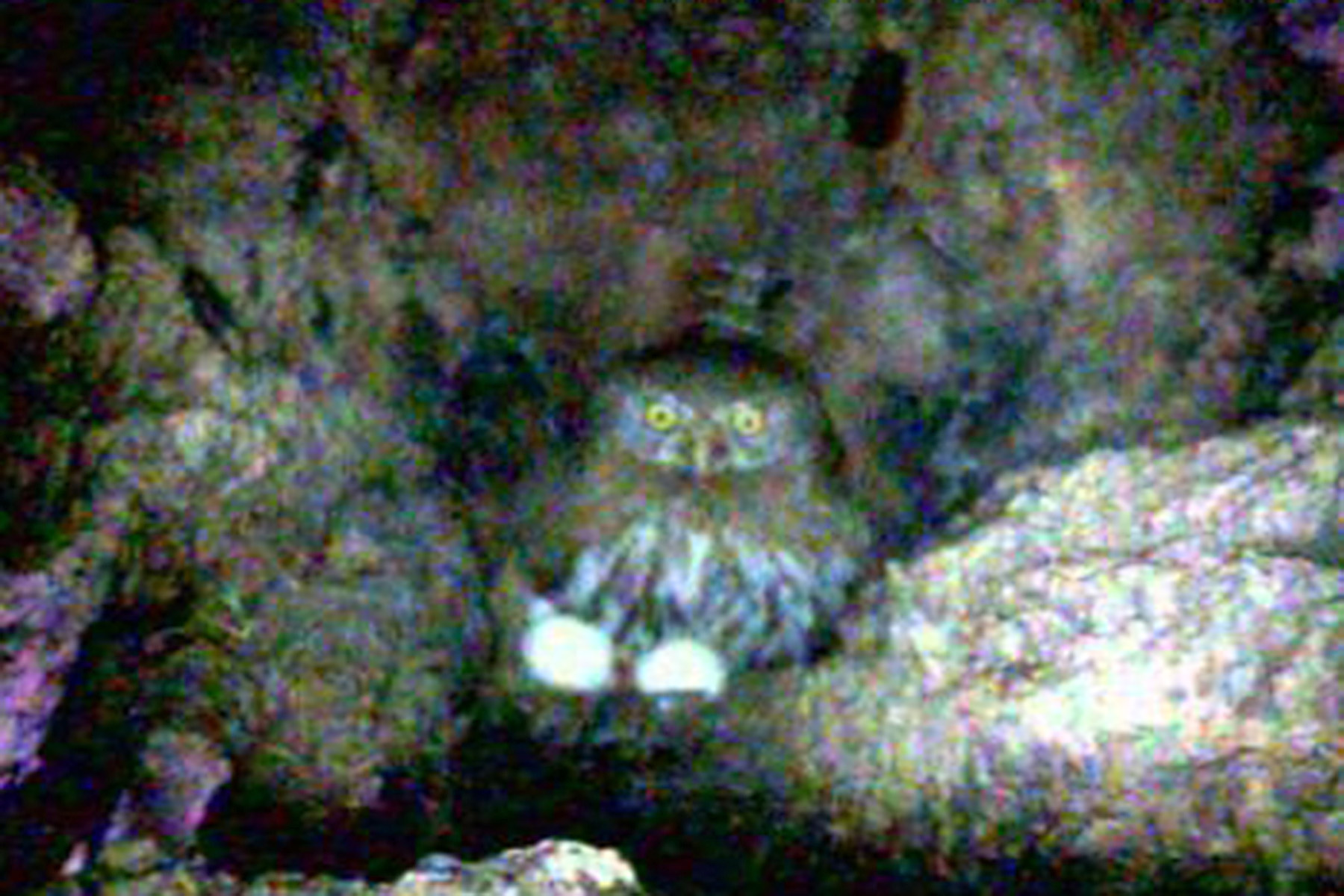