I’ve never been a fan of Samantha Bee. I don’t find her funny, and she’s a one-note Social Justice Warrior comedian, whose real schtick is dissing Donald Trump. Her fervor seems faux, too. Now Bill Maher does a lot of Trump-dissing as well, but somehow he seems a lot funner than Bee (for one thing, his delivery is more low-key, clever, and wry). Plus, to HuffPo, which I abhor, Samantha Bee is a recurring hero and leitmotif in their instantiation of Trump Derangement Syndrome.

Fortunately, I don’t even get the channel Bee’s on, and don’t watch much t.v. anyway. But this week she was all over the news for going off on Ivanka Trump on her “comedy” show “Full Frontal”. In particular, she used the words “feckless cunt” to refer to Ivanka, whose innocuous tweet, below, I wrote about the other day.

HuffPo went off on that tweet with a post (below) about how Twitter reminded Ivanka, in view of the post, of the “missing migrant kids.” Well, Ivanka doesn’t make immigration policy, and it’s simply rude to go after her for such a tweet, especially when the “missing migrant kids” weren’t her father’s fault, but kids who had arrived alone at the border, were placed into custody by Health and Human Services, and whose sponsors didn’t answer attempts to contact them. They were not “ripped from their parents”, either.

This was HuffPo’s article a short while back (click on all screenshots in this post to go to the original articles):

“Twitter”, of course, is not a monolithic person, but a social media site from which HuffPo culls the anti-Trump tweets it wants, and then reports these as if they represent a uniform American reaction. It’s a lazy and even duplicitous way of reporting.

Well, I have no use for HuffPo, but I’m more distressed at the people who went after Trump’s daughter for an innocuous tweet. We on the Left should be better than this: we should not totally demonize someone just because she’s Trump’s daughter, nor damn her for not influencing her dad’s immigration policy. It’s this kind of overreaction that makes us look ridiculous, and gives ammunition to the Right. There’s simply too much demonization from both Right and Left, and a lack of forgiveness, but it’s especially galling coming from our side.

But Samantha Bee couldn’t stay away from the issue, either. Referencing the very same Ivanka tweet, she ranted on this week’s show about the immigration issue, calling Ivanka a “feckless cunt”. The video has been taken down, but you can hear the relevant bit by clicking on the CNN link below: 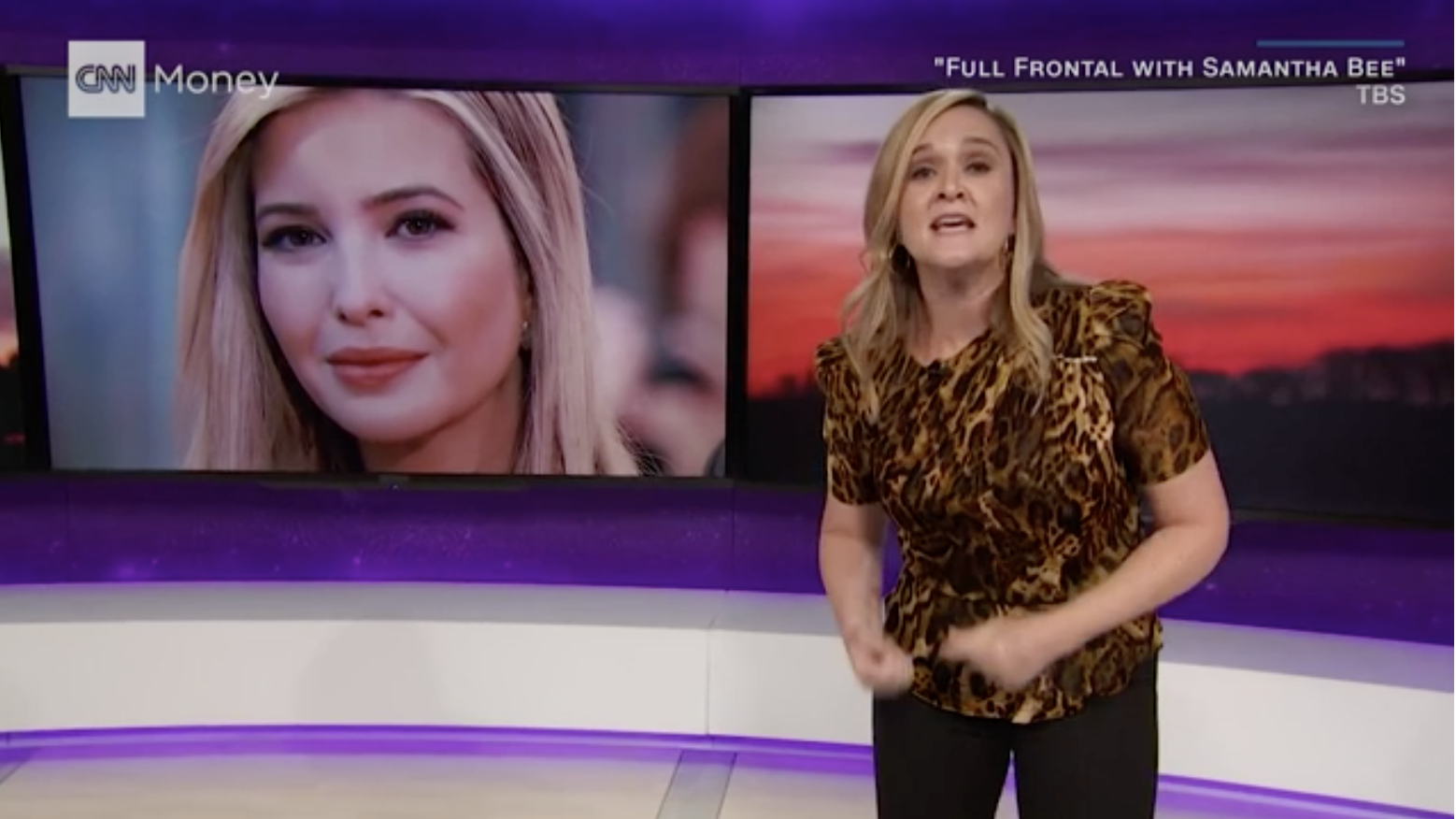 Here’s the transcript from Vulture.com:

“Ivanka Trump, who works at the White House, chose to post the second-most oblivious tweet we’ve seen this week,” Bee says with Roseanne reference No. 2. “You know, Ivanka, that’s a beautiful photo of you and your child, but let me just say, one mother to another: Do something about your dad’s immigration practices, you feckless cunt! He listens to you! Put on something tight and low-cut and tell your father to fuckin’ stop it.”

But then the pushback against Bee came, and not just from rightists. She was called out by Chelsea Clinton, Sally Field, and CNN’s Poppy Harlow, among others, who said Bee’s rant was offensive and over the line. Bee apologized (insincerely, I think, given that she said later her show had been preoccupied with a single word when it should have been dealing with immigration).

I’m not going to call for Bee’s firing, as some have done, and I’m not going to compare her case to that off Roseanne Barr, who was fired from her popular t.v. show for racist tweets. The cases bear some similarities, but also differ in many ways. In Bee’s case, I think that taking away someone’s livelihood for an ill-considered remark is going too far, though that’s the way of the world these days. (The “feckless cunt” remark was not off-the-cuff, by the way, but scripted and approved by the show). I’m sure Bee will be a bit more careful now, and may stay away from Trump’s family a bit more.

But the Way of the Regressive Left is to never apologize, but always deflect. And so we now get this whataboutery from HuffPo, which misses the point entirely:

The point is that Ivanka isn’t making immigration policy, and her father is, and that policy is not good. HuffPo has devoted hundreds of articles to it, but it can’t resist using BeeGate to get one more hit at her father:

But bickering over semantics misses a more urgent moral contradiction: Bee was name-calling. Trump was bragging about sexual assault.

Yes, Bee’s use of the word on her show was juvenile. And as Erin Gloria Ryan noted in The Daily Beast, it distracted from Bee’s larger point ― that Ivanka Trump could be doing a lot more to help keep immigrant kids from being separated from their parents.

But Trump’s remarks, captured while filming an episode of “Access Hollywood” in 2005, weren’t merely a verbal attack. He was bragging about violating not one, but multiple women, arguing his fame made it permissible. And the words weren’t just “locker-room talk” ― more than 20 women have accused Trump of sexual misconduct.

Trump’s comments are backed by the weight of his actions and the damage he’s inflicted upon women he “moved on” without their consent. Women like Mindy McGillivray, Karena Virginia and Ninni Laaksonen, who all claim Trump has groped them.

Or women like Jessica Drake, Temple Taggart McDowell, Jennifer Murphy, Natasha Stoynoff and Cathy Heller, who all claim Trump kissed them without their consent. Or Summer Zervos, a former contestant on Trump’s show “The Apprentice” who said Trump not only forcibly kissed her on the mouth, but also thrusted his genitals at her.

Yes, we know: HuffPo has told us a gazillion times. But what we should remember is that we can call out the bad behavior of our worst President without going after his family, or calling his daughter a “feckless cunt” because she tweeted a picture of her and her child. We are better than that—or should be.

The real “person” who should be fired is HuffPo, which practices whataboutery all the time, and not in trivial ways. For example, they could use this headline:

ACCLAIM FOR HIJABI FENCER SHOULD PALE IN COMPARISON TO THE OPPRESSION OF MUSLIM WOMEN IN IRAN, AFGHANISTAN, AND SAUDI ARABIA

But you’ll never see that on the site.