This may seem petty, but Donald Trump’s inability to write, or even communicate clearly, is yet another black mark on the man and his Presidency. (Note: he does have a B.S. in economics from the Wharton School of the University of Pennsylvania.) But, as reported by the New York Times, (click on screenshot below), a letter he wrote, “corrected” by a retired English teacher, has gone viral.  Click on the screenshot below:

The letter below (enlarged for your delectation at bottom) was Trump’s response to Yvonne Mason, 61, a retired English teacher in Atlanta who had written the President asking him to visit the families of the victims of the Parkland, Florida, School shooting. While attempting to convince Ms. Mason that he had indeed responded, Trump, according to Mason, committed a number of grammatical, capitalization, and stylistic errors. And, politically, the letter didn’t really satisfy Mason:

The letter she received did not address her concerns, she said. Instead, it listed a series of actions taken after the shooting, like listening sessions, meetings with lawmakers and the STOP School Violence Act, a bill that would authorize $500 million over 10 years for safety improvements at schools but had no provisions related to guns.

She went into English-teacher mode, corrected the letter, made a copy, and sent it back to the White House.  Not all of her corrections were on the mark, though:

There was more, but she didn’t correct everything. “I did not mention the dangling modifier,” she said. “I focused mainly on mechanics.”

“Nation” was capitalized, so was “states.” Ms. Mason circled both.

However, a style manual for the federal government calls for capitalizing “Nation” and “Federal” when the words are used as a synonym for the United States. It says “State” should be capitalized when it is referring to the government or legislature. In letters from Presidents Barack Obama and George W. Bush that constituents posted online, words like “Nation” and “President” are capitalized.

The White House did not immediately respond to a request for comment.

The letter stood in contrast to other letters she has received from politicians, Ms. Mason said. Senator Lindsey Graham, Republican of South Carolina, sent “beautiful” letters that struck a tone that “makes me more important than him,” she said. 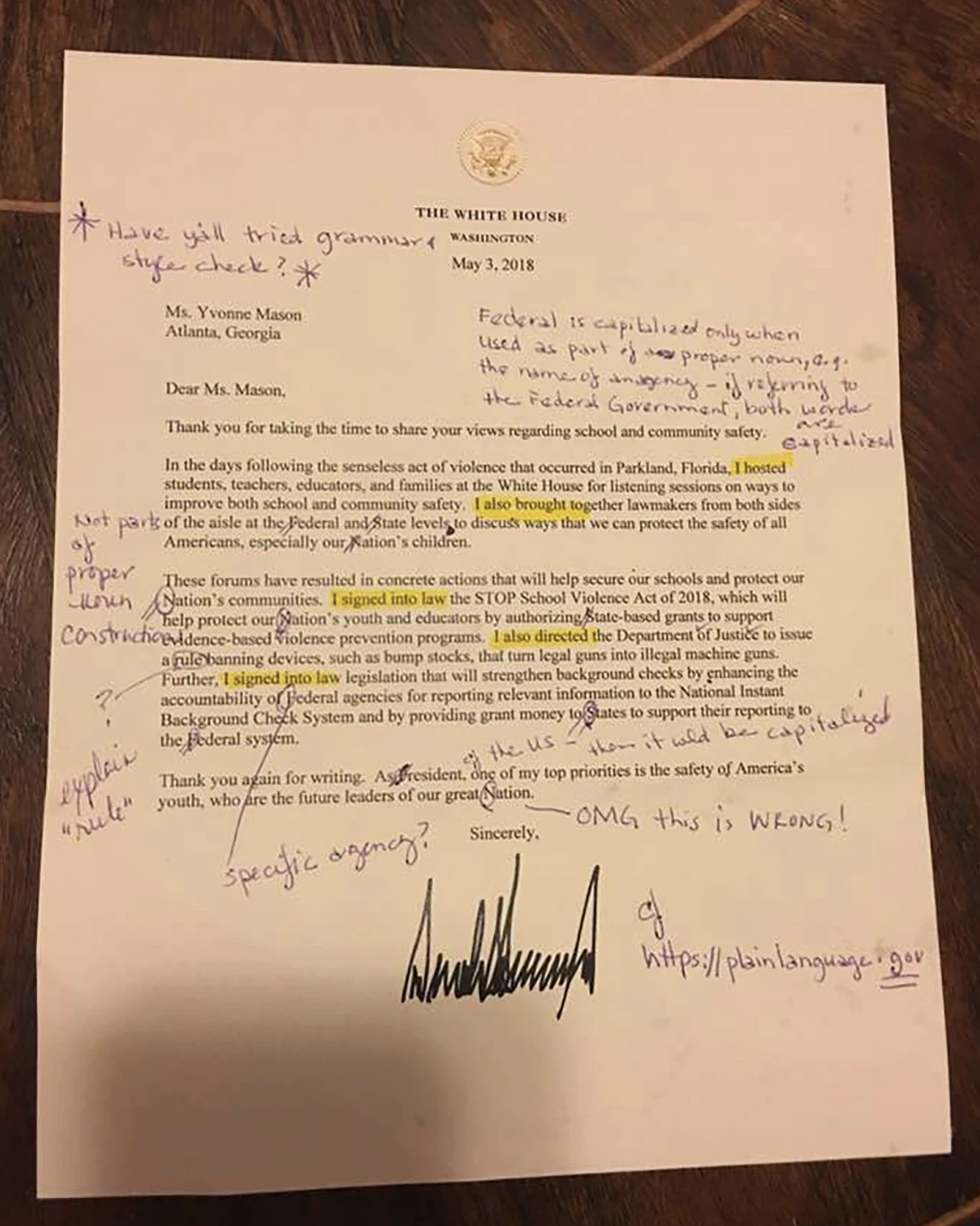 In light of the government style manual, most of the errors, involving capitalization, seem to be Mason’s, not Trump’s. The letter isn’t all that bad, and surely wasn’t even written by Trump! Believe me, I’ve gotten much worse from undergraduate students here.

Nevertheless, people have posted this letter repeatedly in my Facebook feed as just another example of Trump’s stupidity and illiteracy. Yes, the man isn’t that bright, has the attention span of a gnat, and can’t seem to emit a single coherent sentence. But we have much larger problems with Trump and his administration than this letter, which was seized on by the many people unaware of the style-manual rules. These are the people looking for any excuse, no matter how trivial, to jump on Trump. They are some of the people who have been made unhinged by Trump’s election, acquiring TDS (Trump Derangement Syndrome).  Bigger problems: the lack of meaningful action on gun control, the Supreme Court, the complete mess in the Administration’s organization, the Mueller investigation and Russia connection, the unsteady foreign policy, the despoliation and plunder of the environment and our national resources, ad infinitum.

There’s no need to go after stuff like this letter to demonize Trump: he’s demonized himself. But before you circulate this letter, read what the New York Times says.

Here’s another instantiation of Trump Derangement Syndrome. Ivanka tweets a picture of herself with her young son:

. . . and HuffPo brings out the outrage (click on screenshot):

When you’re demonized by the Left, there’s no aspect of your life that’s free from criticism and outrage.