Much more than The New York Times, the Washington Post is becoming the most visible left-wing media site that sticks up for free speech, and by that I mean it will defend purveyors of so-called hate speech  against repeated deplatformings and disruptions by the Authoritarian Left.

To see this, you might want to first read the report of Chancellor of the University of California at Berkeley’s “Commission on Free Speech” issued two days ago (full report here). The commission, consisting of various members of Berkeley’s administration, faculty, and even a few students, was convened to prepare a response to recent incidents of violence or threats of violence occasioned by upcoming speeches by Milo Yiannopoulos and Ann Coulter (neither speech occurred, but Yiannopoulos’s speech, which was canceled, provoked outbreaks of rioting and violence). They were also to make suggestions to make the campus climate more amenable to free speech.

What do you suppose Berkeley recommended? Well, read the report for yourself and you’ll see that the  Post‘s critical summary (click on screenshot below) is absolutely accurate: the report can’t help blaming those pesky conservatives for all the troubles, and trying to exculpate the demonstrators, rioters, and threat-makers for all the expense of putting down riots and providing security. If we could just keep the “hate speakers” off campus, the report implies, all would be well.

But of course they can’t say that and at the same time promote free speech. So they make recommendations, all of which make it tougher for conservatives to bring speakers to campus. They even propose some “free speech zones” away from the main part of campus, including Sproul Hall Plaza (home of the original Free Speech Movement demonstrations), to isolate those speakers whose presence will provoke demonstrations. (That means, of course, right-wing speakers or those liberals, like Christina Hoff Sommers, who don’t adhere to principles of the Authoritarian Left).

And those groups who wish to bring controversial speakers to campus must now not only bear most of the expense, including security, but submit statement of how their proposed speakers don’t violate the campus’s “principles of community.” Big Brother is watching!

Have a look at this article; it’s not long, and I’ve put a brief excerpt below:

The Berkeley document does not condemn the violence, mind you; that is virtually the only direct mention of it. But apparently, antifa’s violence is now eligible for condemnation, if someone else had a mind to provide it.

They have plenty of harsh words, however, for the conservatives who were targeted. “Many Commission members are skeptical of these speakers’ commitment to anything other than the pursuit of wealth and fame through the instigation of anger, fear, and vengefulness in their hard-right constituency.” Their invitations to speak represented “the assertion of individual rights at the expense of social responsibility by a handful of students.” As a result, the commission finds speech of this kind “hard to defend, especially in light of the acute distress it caused (and was intended to cause) to staff and students.”

In the report, conservatives are active, provoking and triggering. The left-wing activists who set things on fire appear in passive voice, that great grammatical machine for sanitizing the indefensible. Left-wing groups have reasonable fears for their safety from conservative speakers, and the police needed to defend them (from what? Further deponent sayeth not.) Conservative students “allege” that their beliefs make them targets for left-wing professors. And when it comes to the remedies, it’s clear who the commission thinks ought to change their ways.

The commission’s members can’t quite bring themselves to say campus conservatives ought to be prevented from inviting speakers antifa doesn’t like. But they can’t quite keep themselves from implying it, either. Again and again, they impugn the motives of speakers and the students who invite them, complain that conservative groups are a tiny minority (isn’t this supposed to mean we try extra hard to make them feel welcome?), and otherwise suggest that the real culprits are conservatives, not the people committing the violence. The commission recommends thinly-veiled mechanisms to make it difficult for conservatives to stage these events — for example, by requiring student groups to provide one student volunteer for every 50 expected attendees, a rule that is obviously going to disproportionately burden groups representing a small minority.

. . . And I hardly believe that I have to say that — whatever their offenses against common manners and common sense — Coulter and Yiannopoulos are not smashing people in the head with bike locks.  They are not hurling Molotov cocktails. They are not attacking young women with flagpoles. The people doing those things are the ones the commission has tenderly swaddled in the protection of the passive voice. To focus on the motives of the speakers, rather than the violent actions of the protesters, suggests a commission that has allowed their tribal politics to blind them to basic human decency.

. . . And thus the ancestral home of the free-speech movement inches as close as it dares to advocating for censorship of any speech that offends a powerful majority — or even any minority that’s decently armed.

Indeed. I’ve put the executive summary of the report below, but suggest that you read the whole thing if you have time. If you don’t agree with McArdle, then I don’t know what to say, because the report positively breathes enmity towards conservative “hate speech”, and blames conservatives, not protestors, for all the trouble. 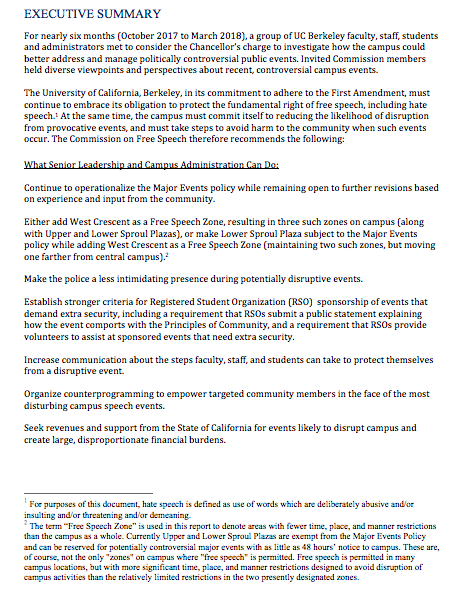 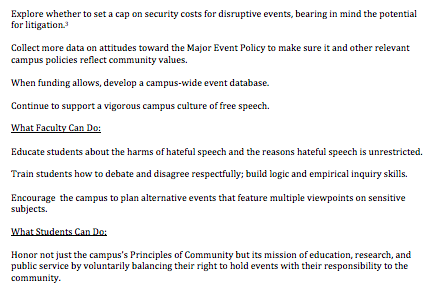 Here’s one further excerpt from the report which shows that the Berkeley administration stands ready to counter specified “hate speech” by sponsoring its own counter-speech, rather than letting faculty and administration exercise counter-speech on their own. When the administration so blatantly takes sides in controversies that have not yet erupted, you know that they’re not serious about promoting free speech, no matter what they say (my emphasis):

The Commission does not deny that hate speech can impose serious harms on its targets, and the harm is only exacerbated when the speech is allowed to take place within the boundaries of shared community space.  [JAC: note that nowhere do they define “hate speech.”] At the same time, the campus is part of a larger political culture filled with disturbing and hateful rhetoric (especially on the social media that have come to define the experience of free speech in the contemporary world). The campus should encourage members of the community to function in this environment with a sense of self-confidence and agency.

To this end, the Commission suggests that the Administration respond to the most disturbing events planned for the campus by sponsoring alternative events, perhaps scheduled at the same time, that aim to empower participants, by helping them to understand current events better and to take constructive steps to counter the forces that would seek to exclude and denigrate them. A teach-in with local representatives of the Southern Poverty Law Center elsewhere on campus, for instance, might be an effective counter to celebrity hate speech by individuals associated with the disturbing resurgence of white supremacism. The Chancellor herself, and other campus leaders, could exercise their own free speech rights by speaking out forcefully against hate speech on campus, and encouraging participation in events programmed to counter such speech.

Wouldn’t the Southern Poverty Law Center just love to go to Berkeley to do its teach ins, especially when the University sponsors it? And when the Chancellor or administration suggests this kind of stuff in advance, you know that they’re holding their noses when they talk about promoting free speech on campus.

By all means let the campus organize counter-events. But when it’s done officially by the University administration, that means putting your weight on the scales, not promoting free discussion. And blaming the speakers rather than rioters for violence and disruption is doing the same thing. If students riot when Ben Shapiro talks, and the administration itself organizes anti-Shapiro events, then you know a campus has lost its compass for free expression.

What a sad thing to happen to the home of the famous Free Speech Movement!

87 thoughts on “UC Berkeley issues a ridiculous and biased report pretending to support free speech, but really criticizing the Right”