I’m now back in Chicago, have checked the duck pond (Frank was there, but no Honey 🙁 ), and will put up the last batch of photos from my trip to Florida and New Mexico.

As I noted yesterday, two Great Horned Owls nest in the local Home Depot. Consult that post for full photo documentation, but here’s the male again. 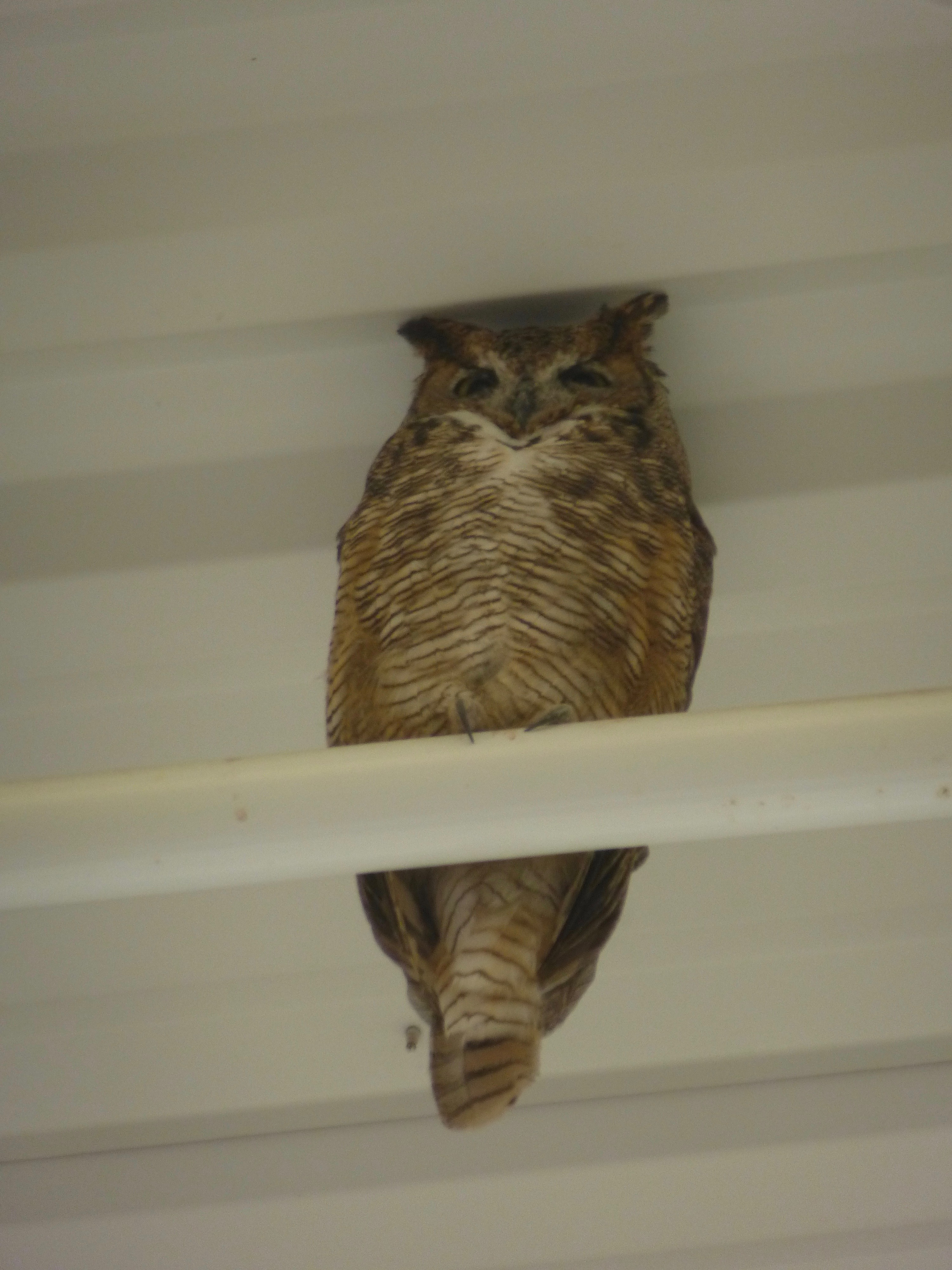 We were looking for rust remover for Bill’s collection of old tools, but Home Depot didn’t have the right kind, so we repaired to a local ranching store, which sold hay, western clothes (I bought a Wrangler western-style shirt) and gun safes: heavy places to lock your guns. Some Americans have a lot of guns. For only $1000, this safe claims to store up to 64 guns. God bless America! 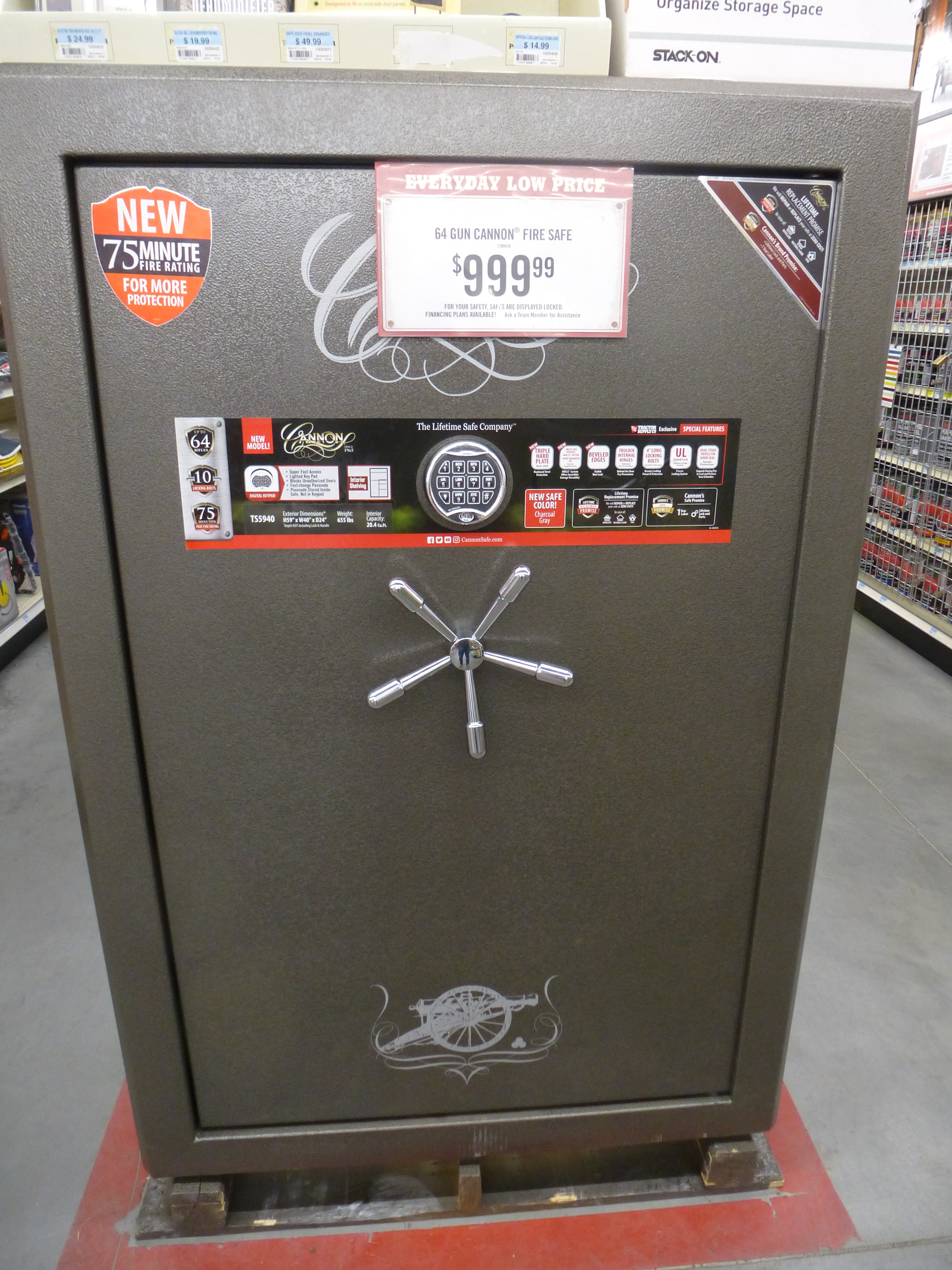 I’ve posted a lot of pictures of the tuxedo cat Boris, but have neglected the lovely but shy tortoiseshell cat Janet. Well, here she is: 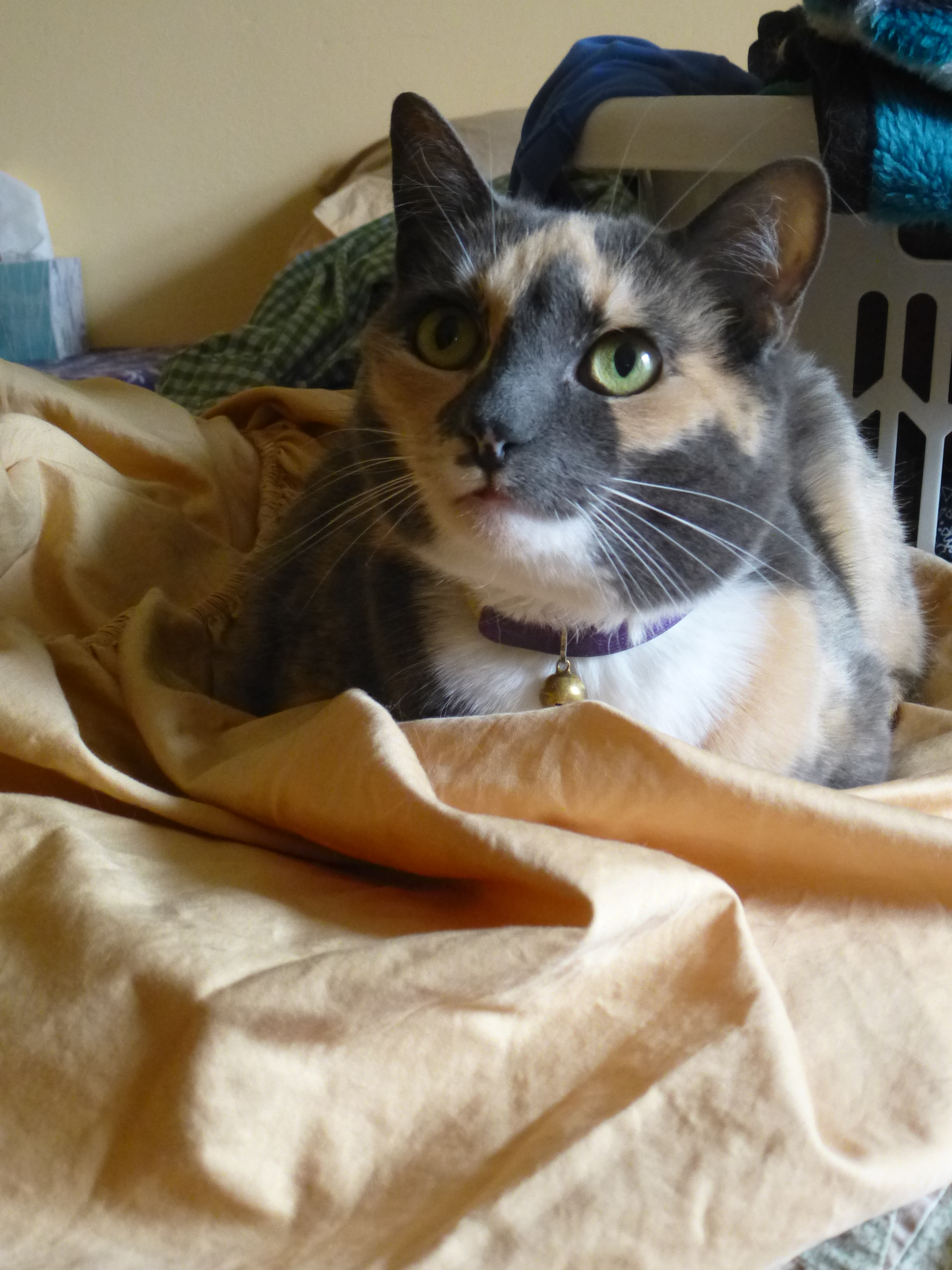 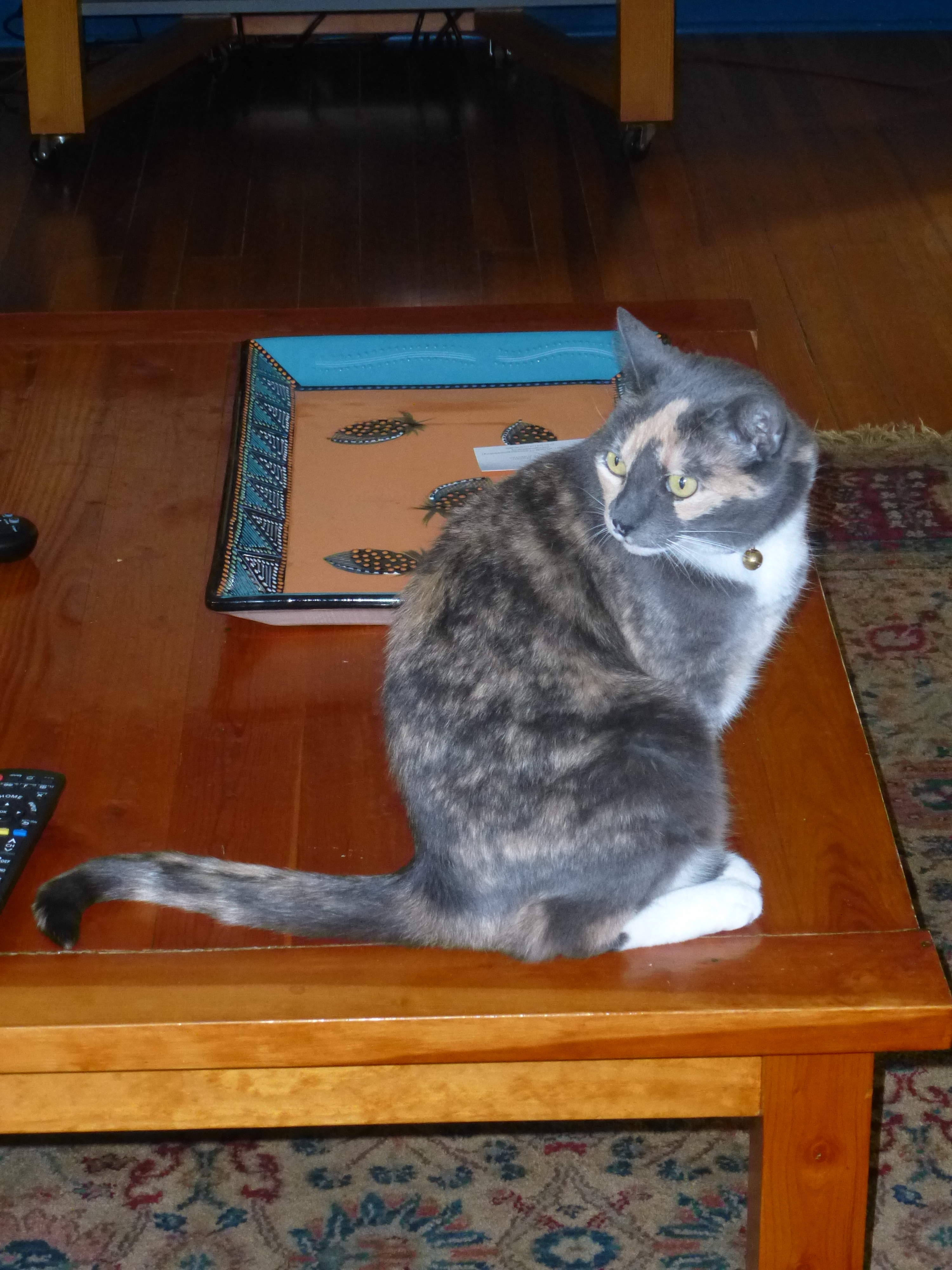 We started measuring the “pawness” of both cats, but don’t yet have enough data. Here’s Avis observing Janet using her right paw to extract a treat from a cardboard toilet roll: 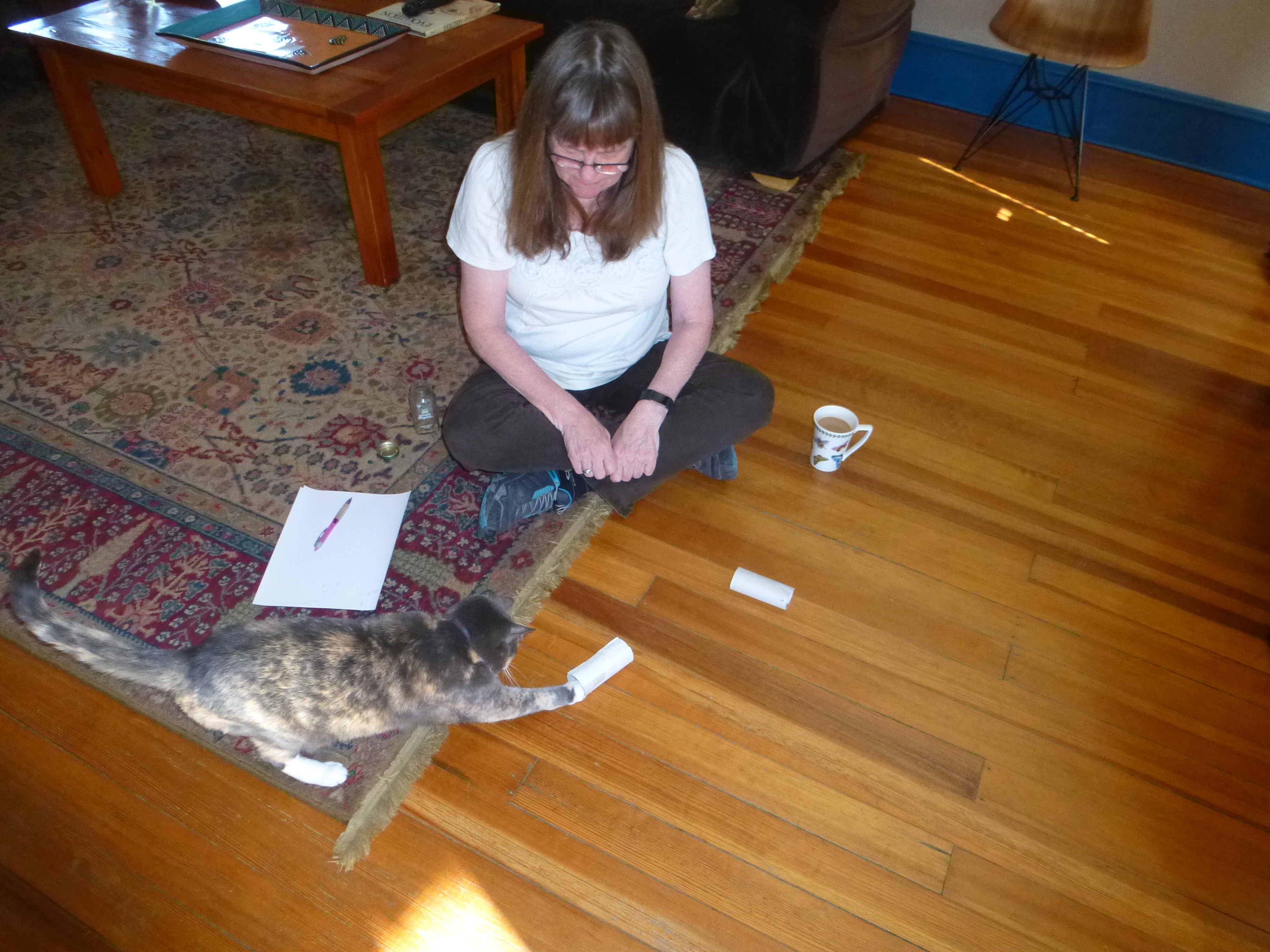 Besides my shirt, here are a few other items I brought back from New Mexico: authentic salsa (#2 in last year’s state salsa-tasting contest), powdered green chile to add to stews and other stuff, and piñon-nut coffee, flavored with the essence of the pine nut (I haven’t tried it yet, but it’s supposed to be good): 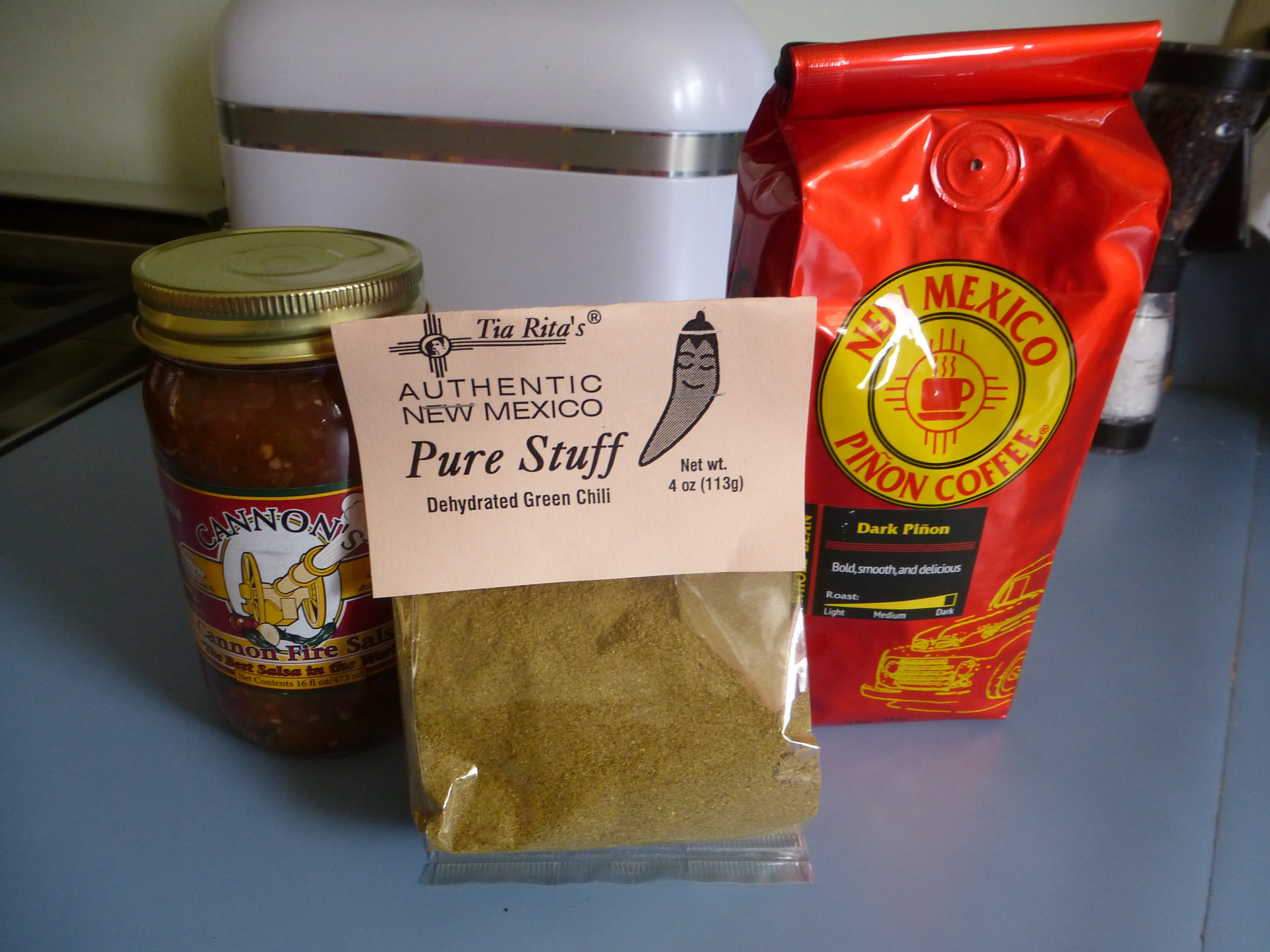 Boris has a real liking for my feet and shoes, even though they aren’t odiferous (at least I’ve never been told that!). He liked to sleep with his head on my flip flops: 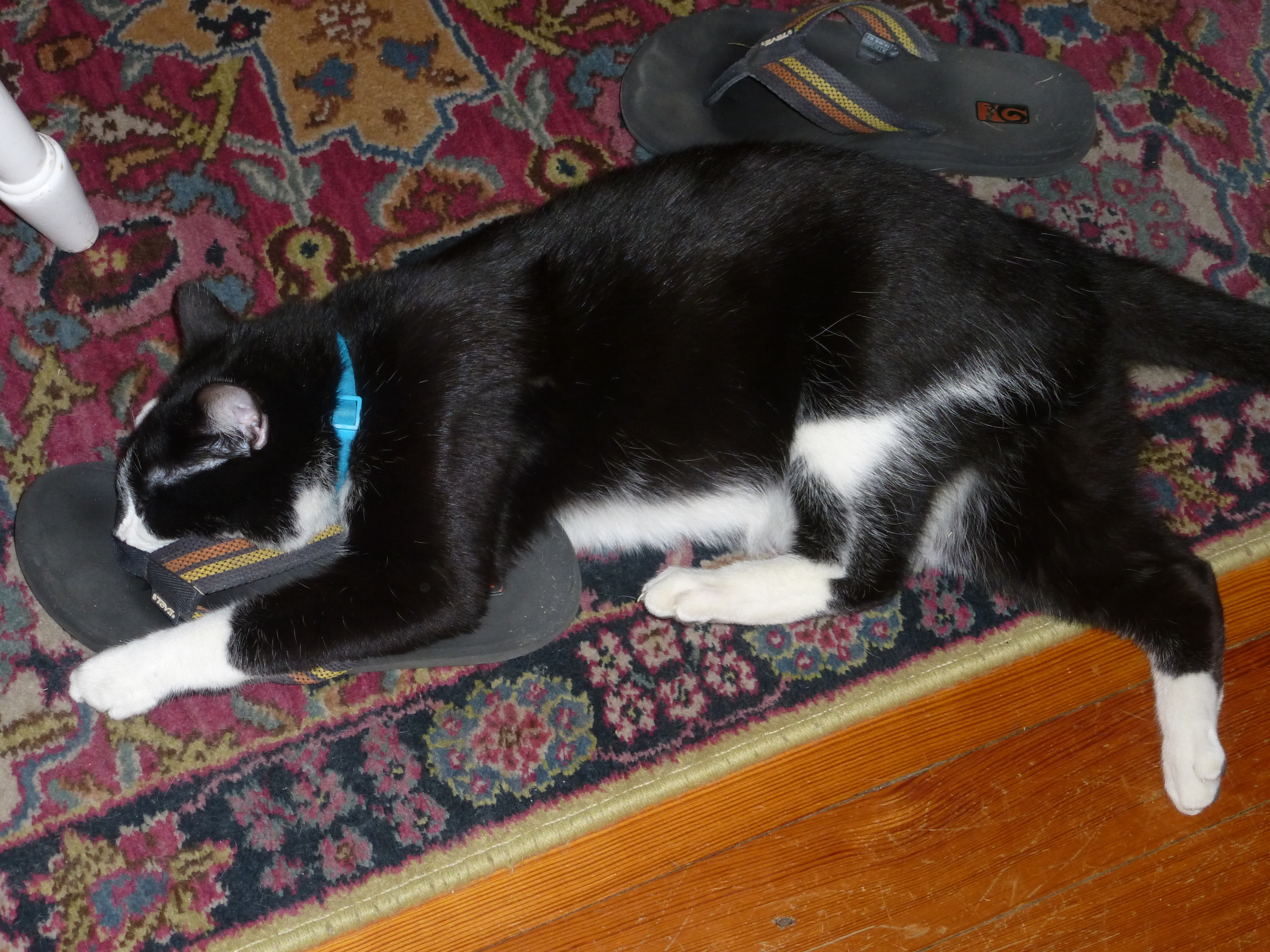 And he would lick them, as shown by the wet spot below. 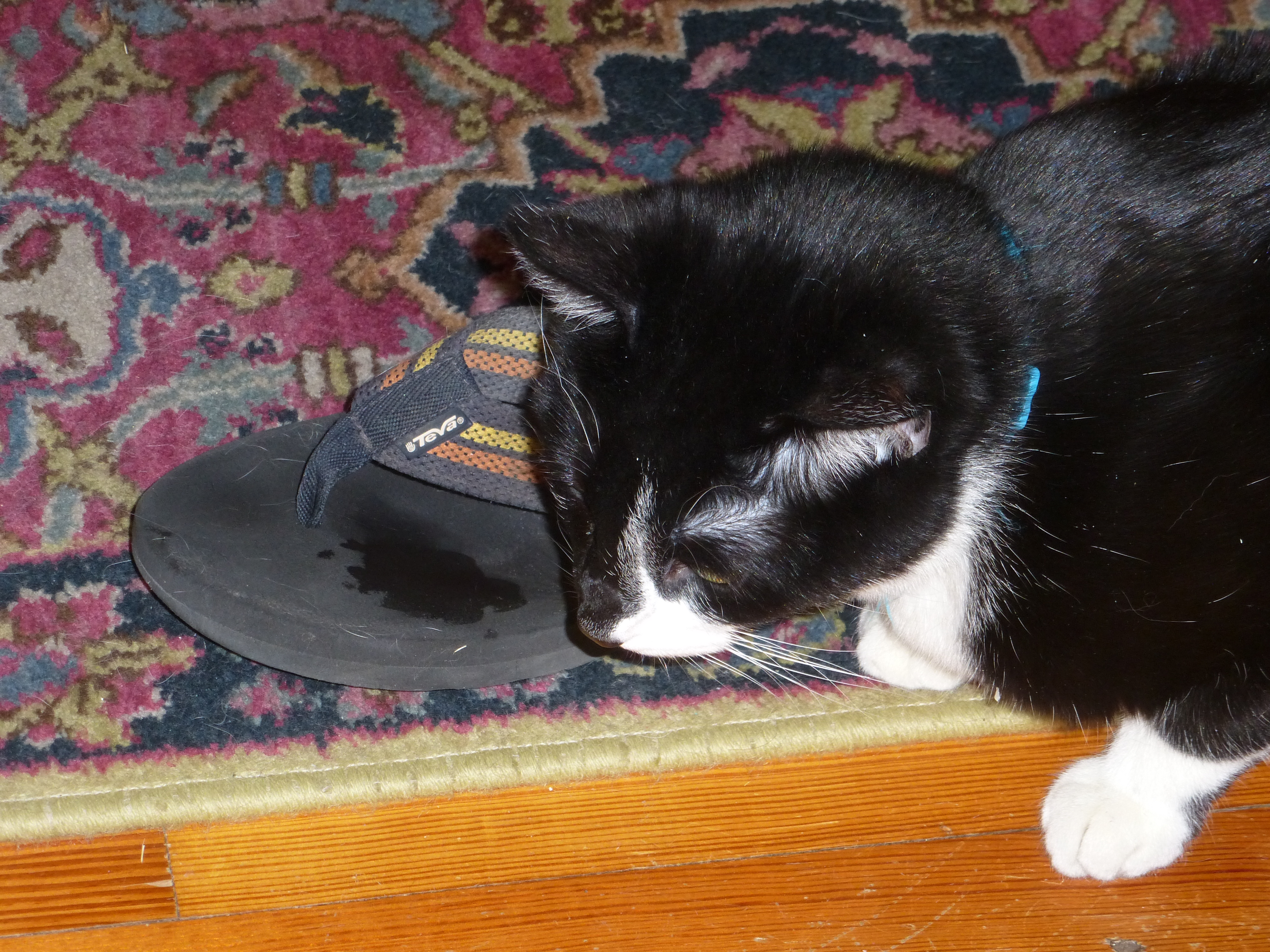 On Friday we celebrated my last day in Las Cruces—and an academic promotion for Avis—by having two New-Mex meals. The first was at a purely local spot, not often patronized by Anglos, called Enrique’s. 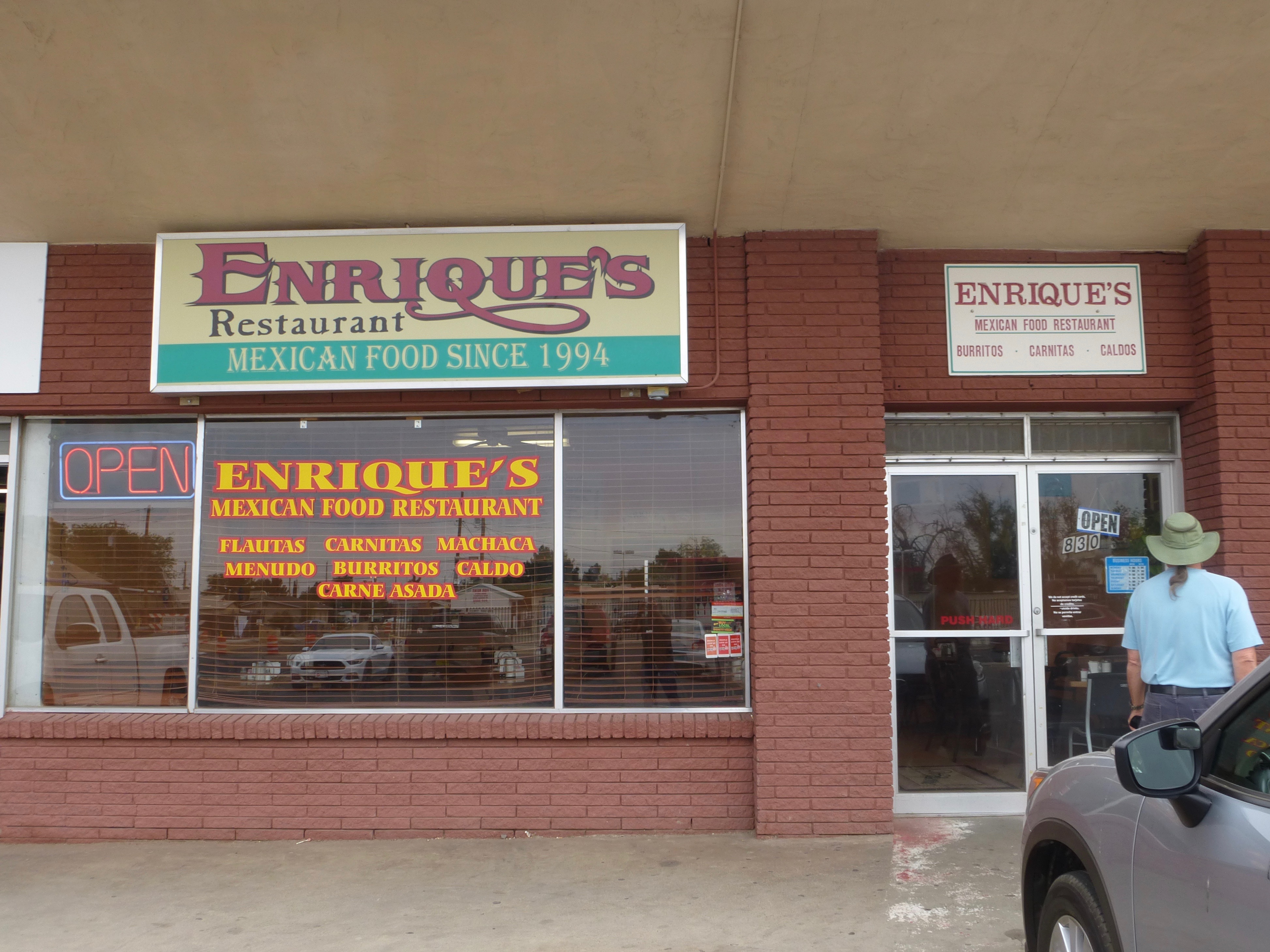 A late breakfast: a chile relleno (my favorite of all Mexican foods, I’ve decided) and a chicken enchilada, along with rice, beans, and chips served with perhaps the best homemade salsa I had on this trip. 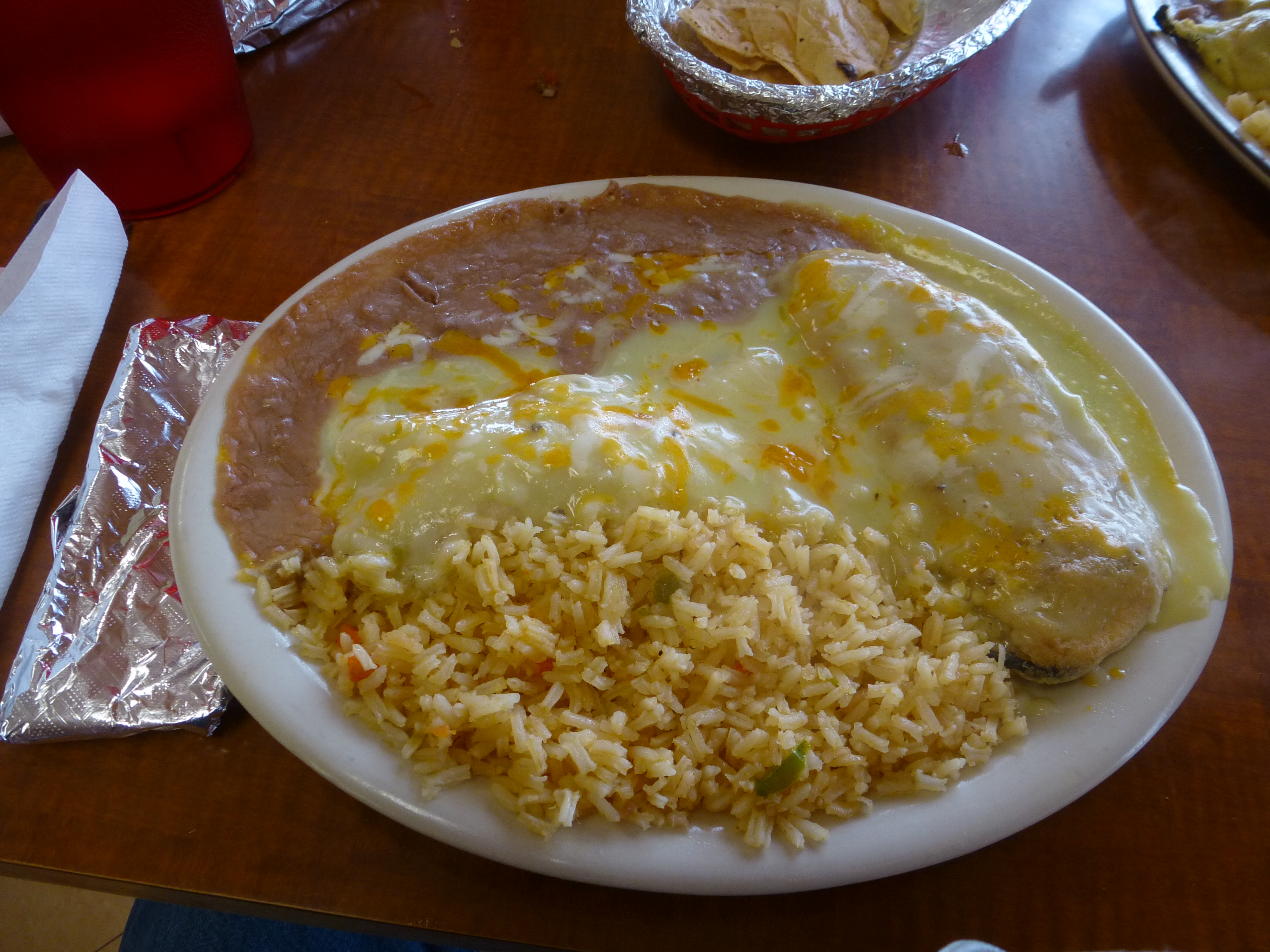 Bill practices archery (he doesn’t hunt!). Here he is shooting at a target in his backyard, and I believe I got a shot of the arrow in flight (it’s the yellow dot to the upper left of the target). I tried it myself from about half the distance, and managed to hit the yellow target, but wasn’t even close to a bulls’s eye.

There’s no sight on the bow, and it’s hard. On the other hand, this bow (which I believe had a 50 pound pull), sent that arrow off fast, so I can imagine how ancient longbows, with over 120 pounds of pull, could easily do serious damage to a human body. 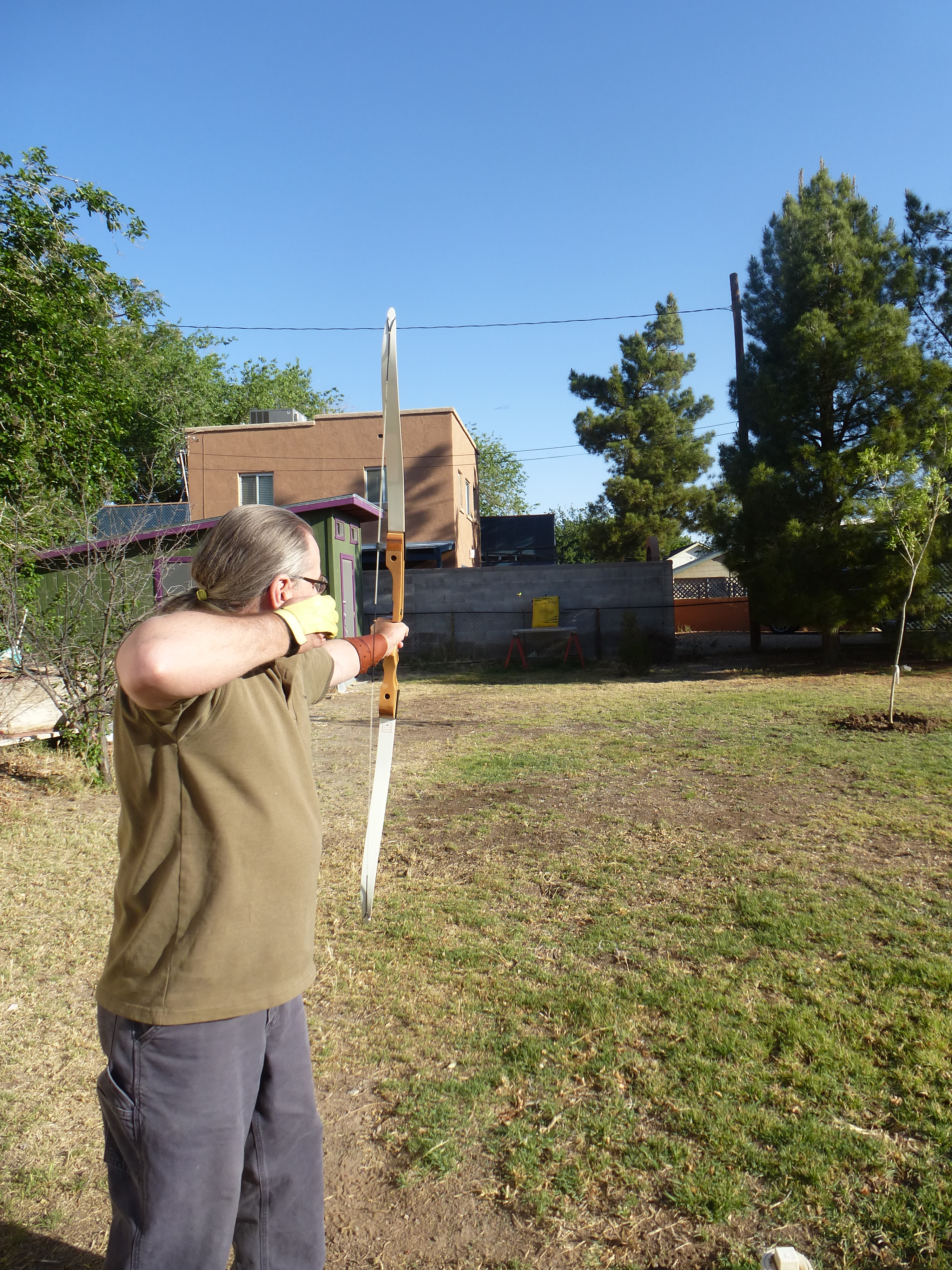 As you can see, Bill was quite good, putting all four arrows right next to where he was aiming: 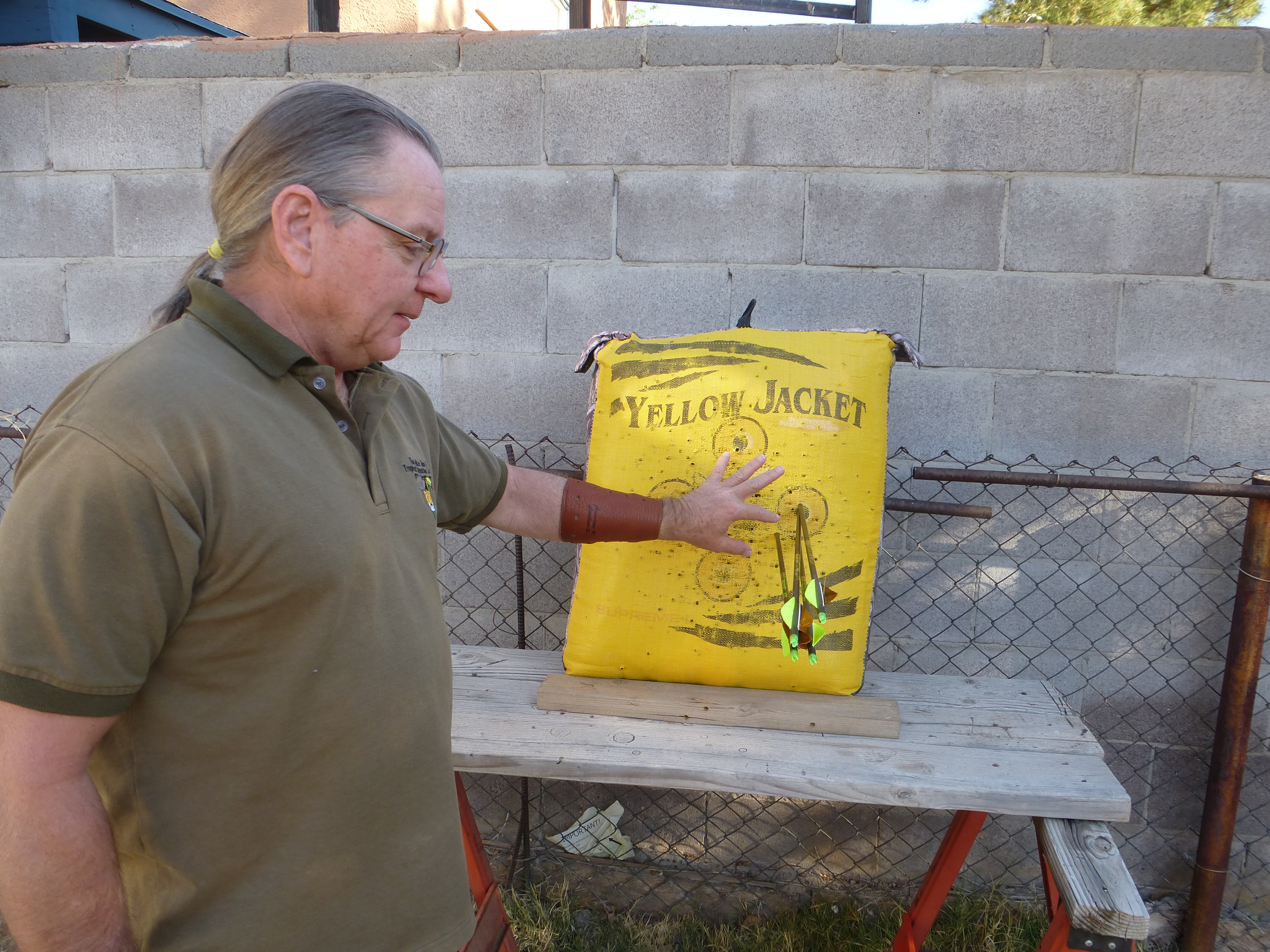 Our celebratory dinner was at a famous place about 20 miles south of Las Cruces, Chope’s Bar and Cafe in La Mesa. It’s renowned for its chiles rellenos. Here I am worshiping a large green chile: 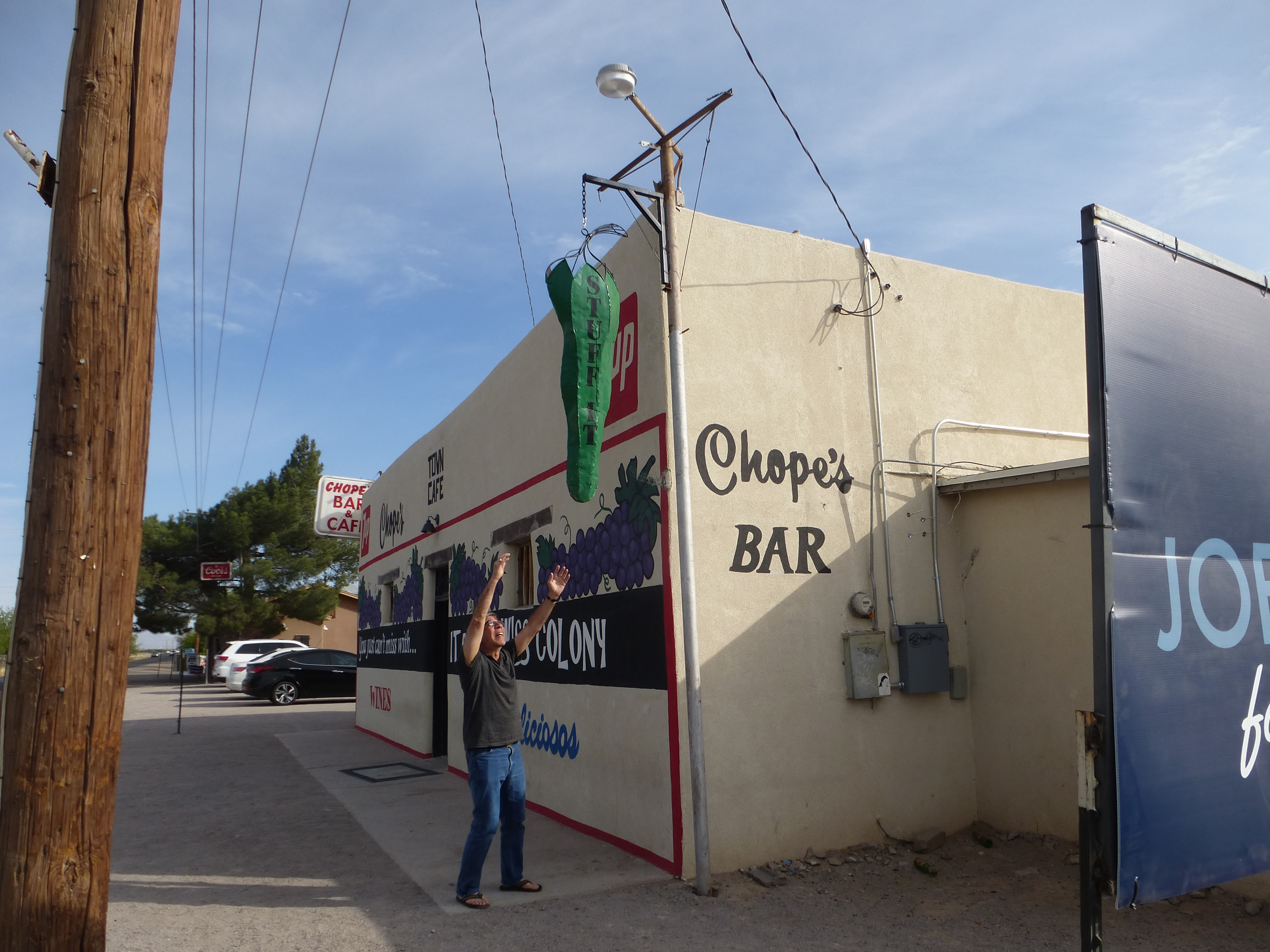 My dinner: a big plate of chile relleno (lightly breaded, with a great vegetable flavor), an enchilada, a taco, and a tamale. This was the first meal (besides the blue corn pancakes in Santa Fe) that I couldn’t finish: 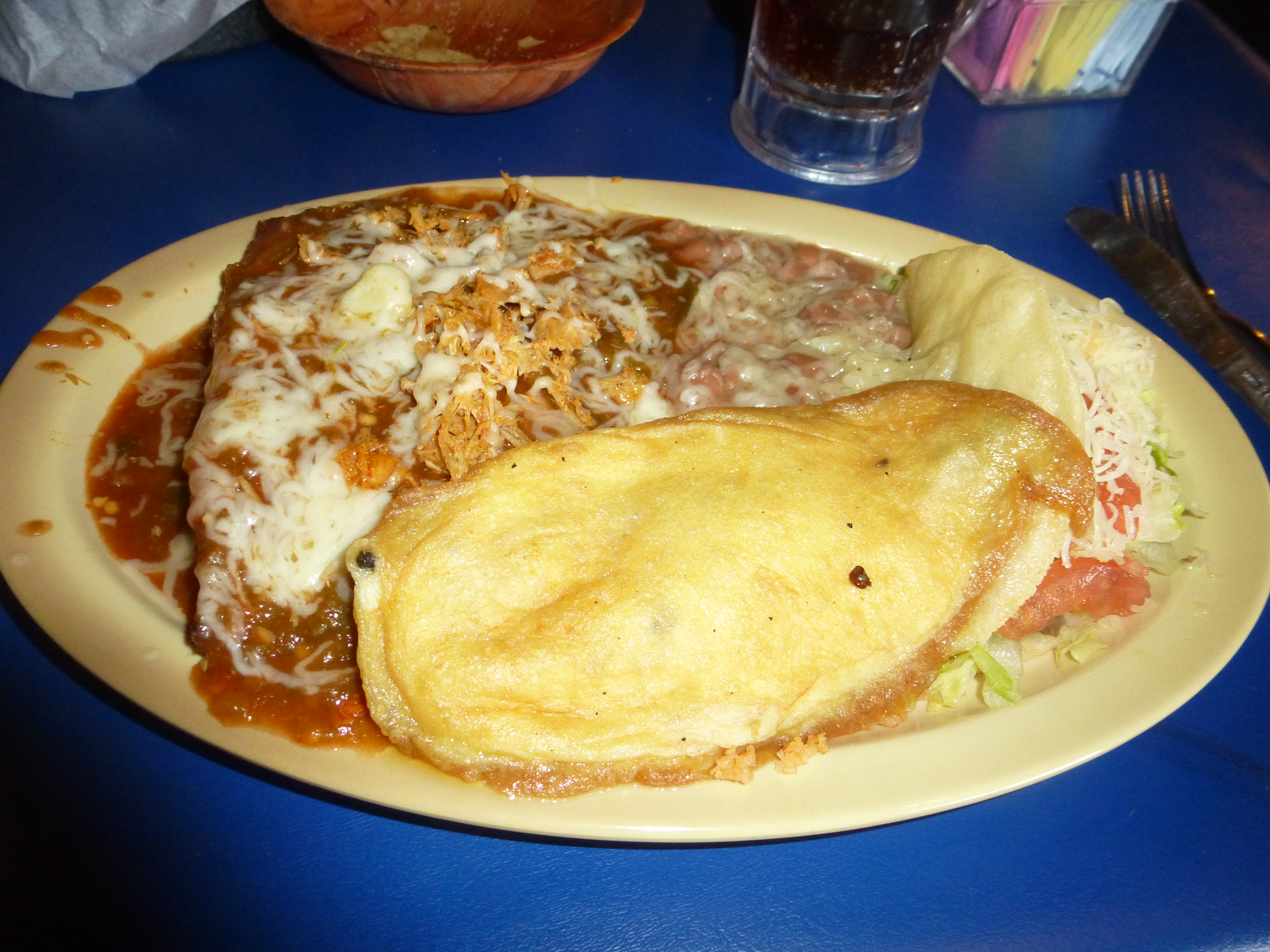 We then repaired to Bill and Avis’s “local,” the High Desert Brewing Company, for a few craft brewskis. Across the street is a pedestrian-crossing sign that some wag altered by putting a beer glass in the crosser’s hand: 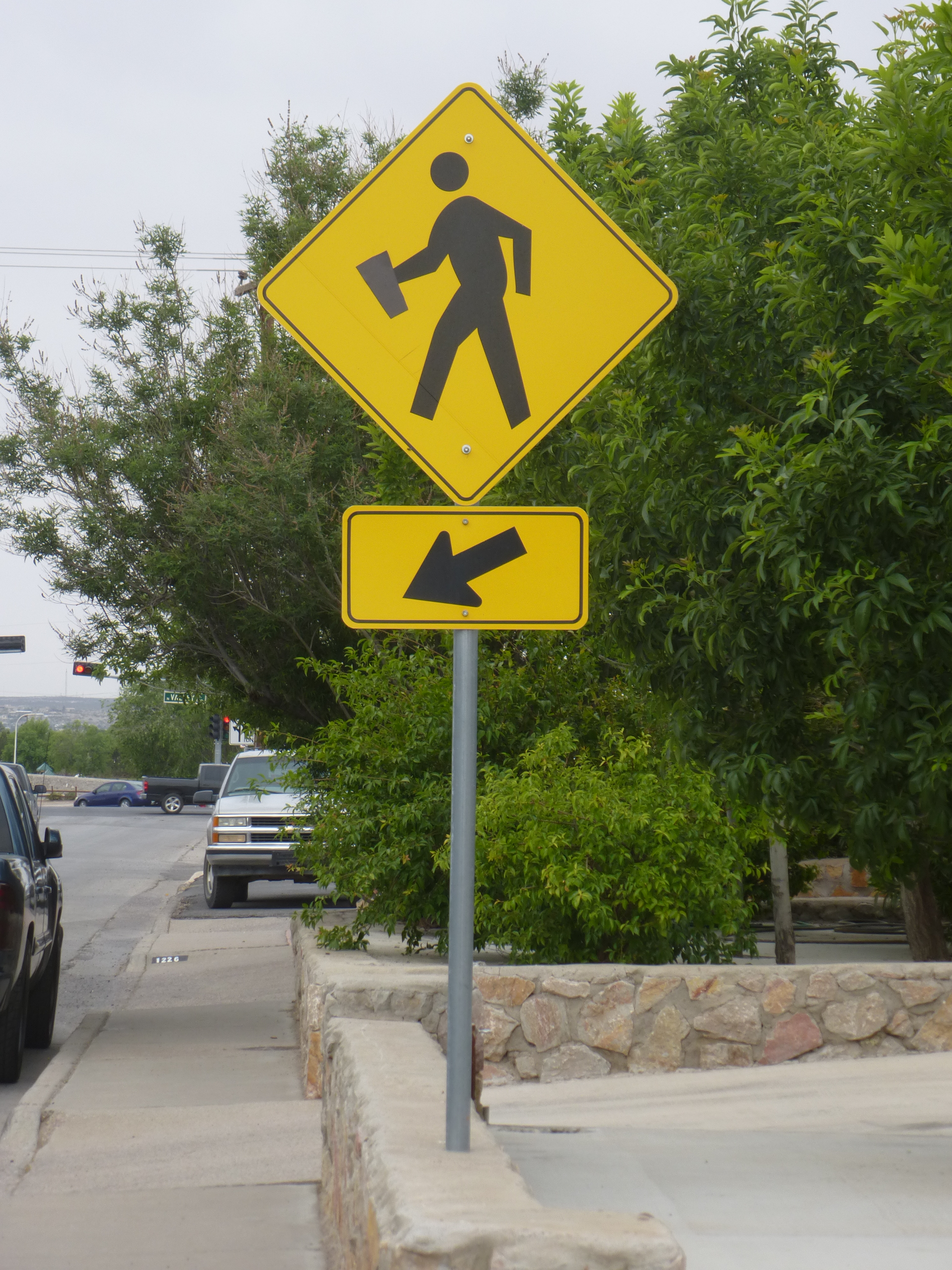 The nachos at the place are famous and huge: we watched some firemen come in to bring a bunch back to the firehouse. Here is the “medium” portion: 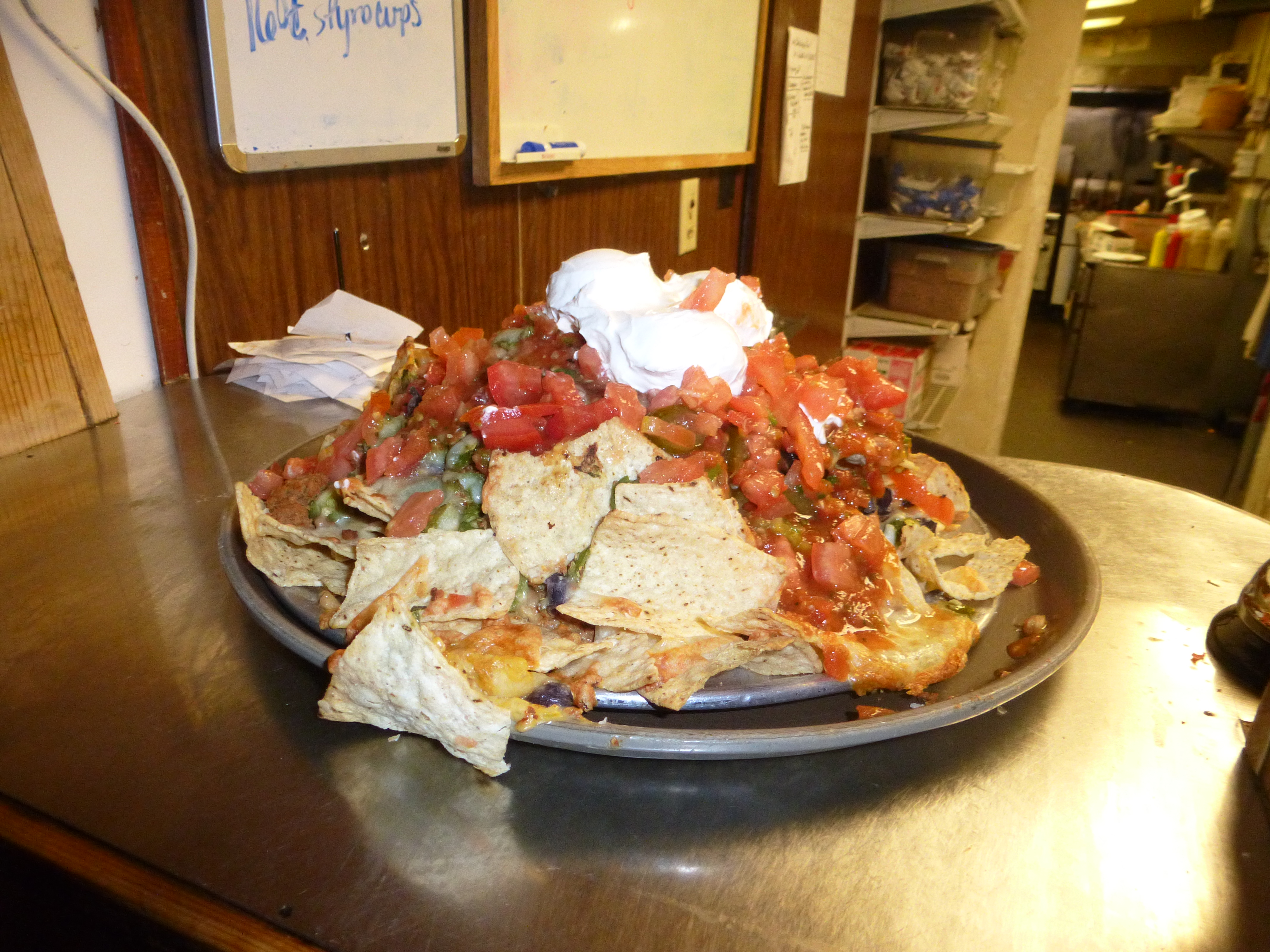 Finally, yesterday it was time to leave. As Avis and Bill drove me the hour to the El Paso airport, they pointed out salient features. Here is caliche, the layer of calcium carbonate under the ground that plays hob with gardeners in desert areas. 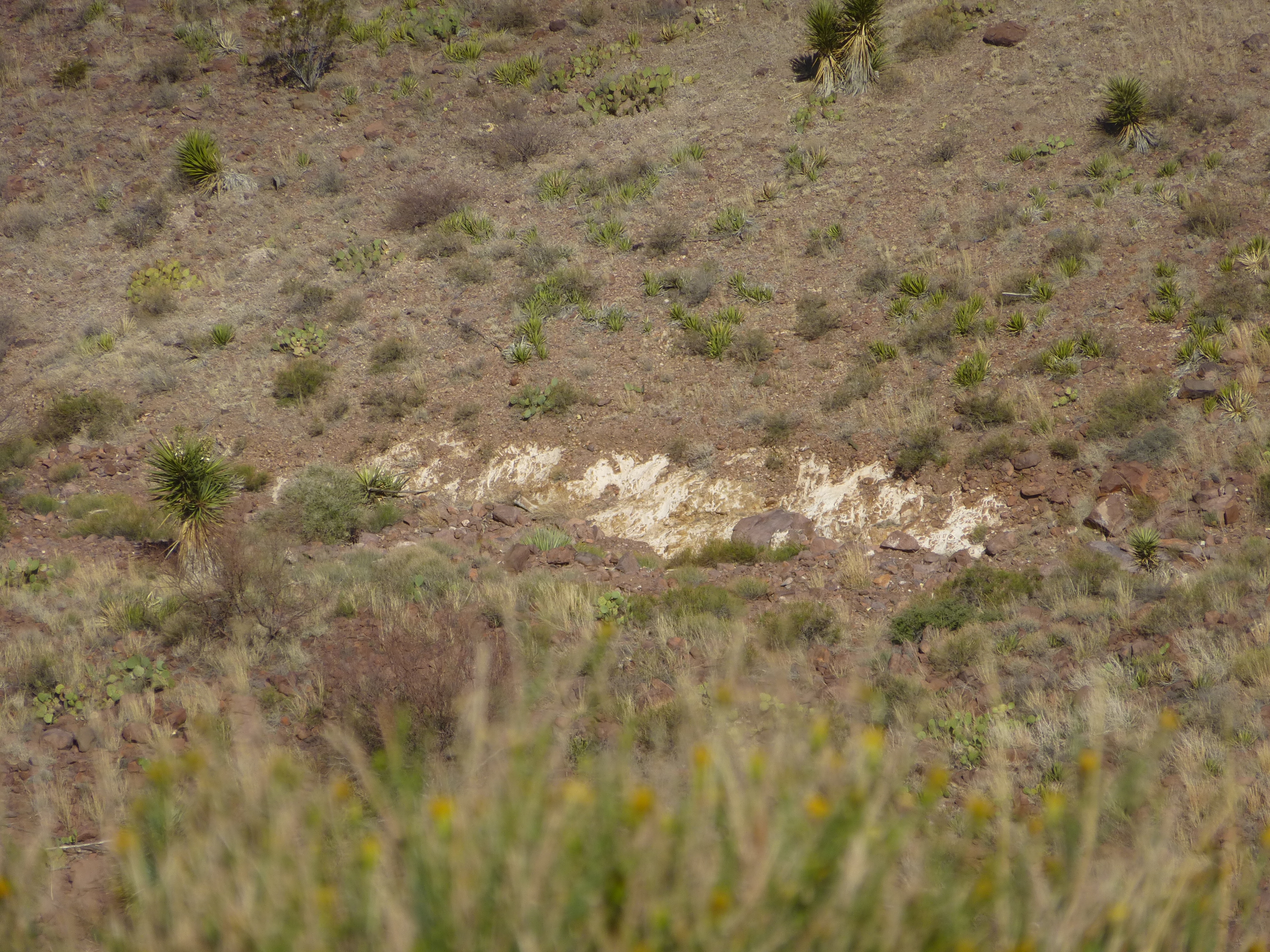 And here’s the border between New Mexico and Mexico, with the town on the other side being Juarez. That line running across the picture and up the hill is in fact a border wall, which Trump wants to extend the whole length of the border. You can see the abrupt demarcation between the U.S. and Mexico: 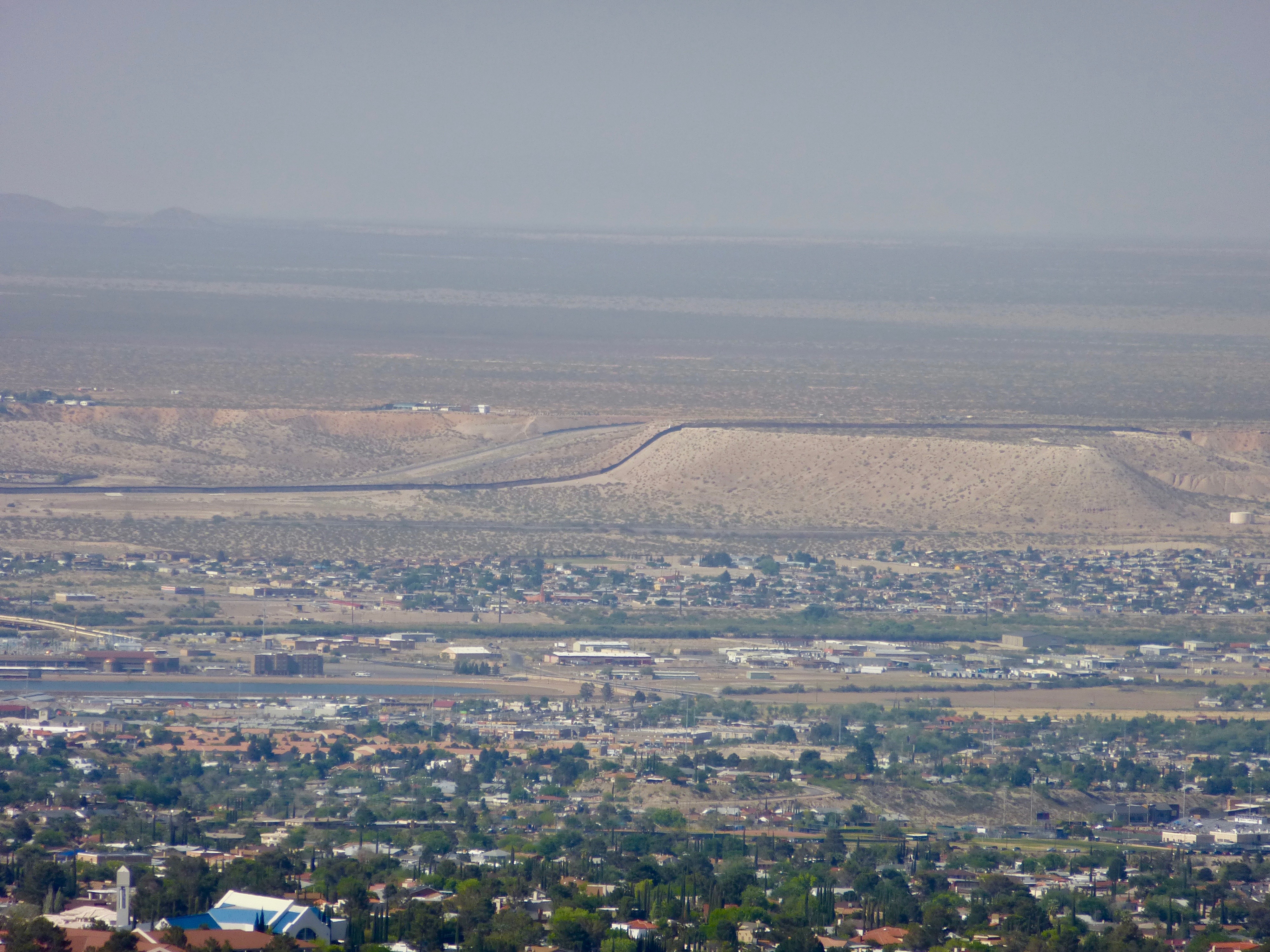 For our last treats, we went to a well known bakery that also specializes in tamales, Gussie’s in El Paso. Tamales are hard to make at home, so most people buy them premade. 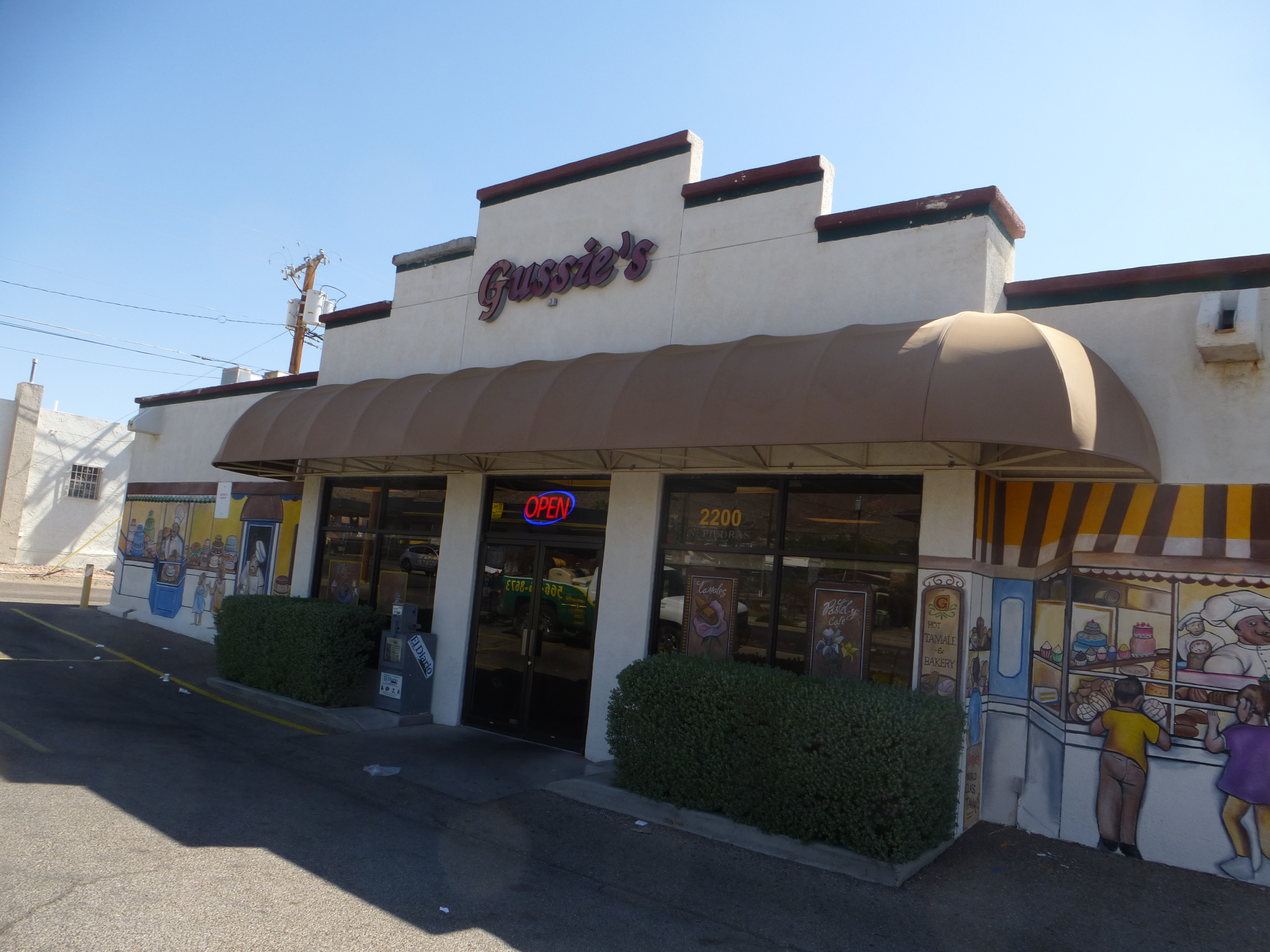 I had two: a chicken and chile (left) and a pork tamale with red chile (right). They were by far the best tamales I’ve ever had, and Avis and Bill agreed that they were superb. (If you don’t know tamales, they are filling wrapped in a cornmeal dough and then steamed in cornhusks.) 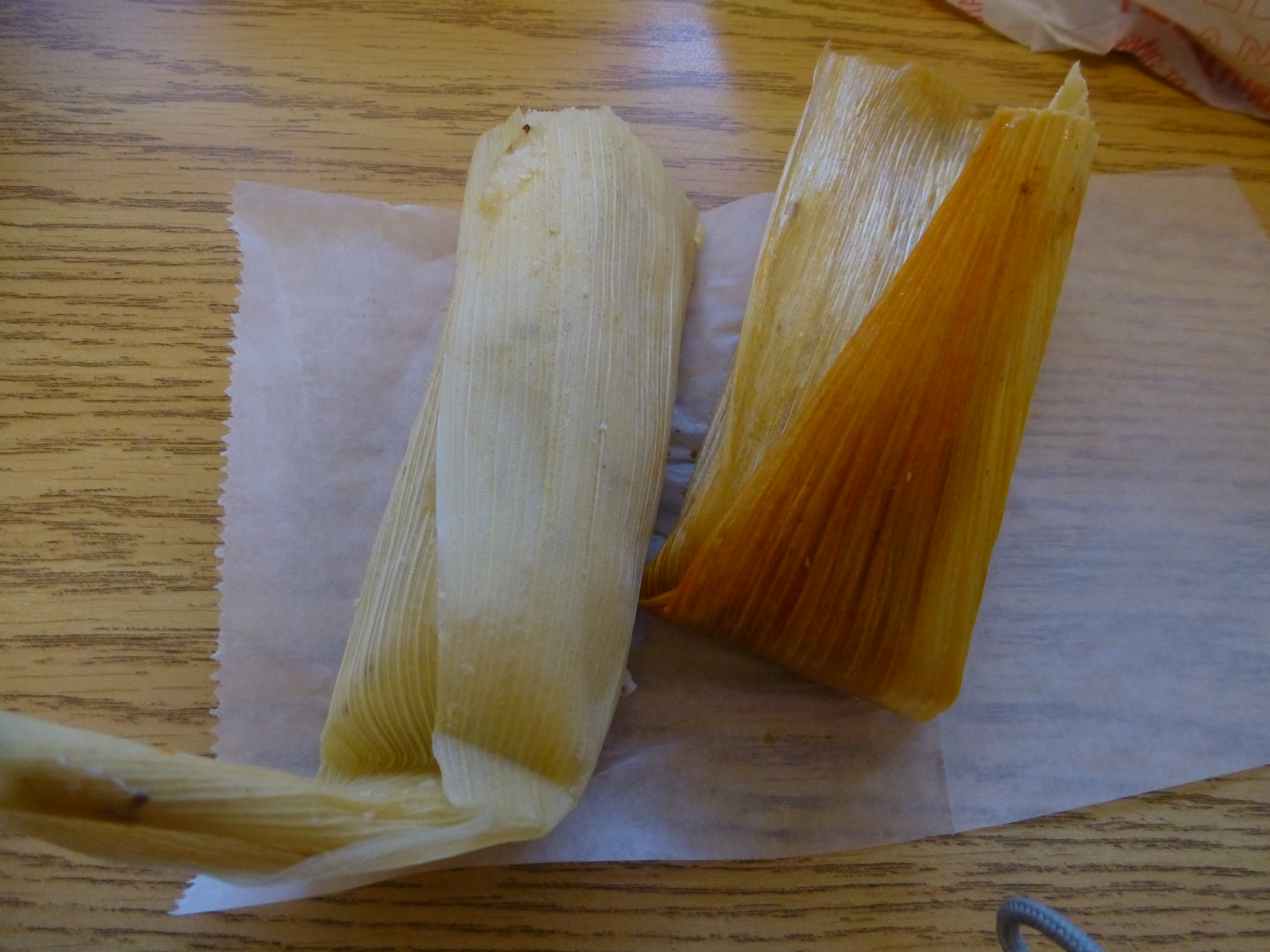 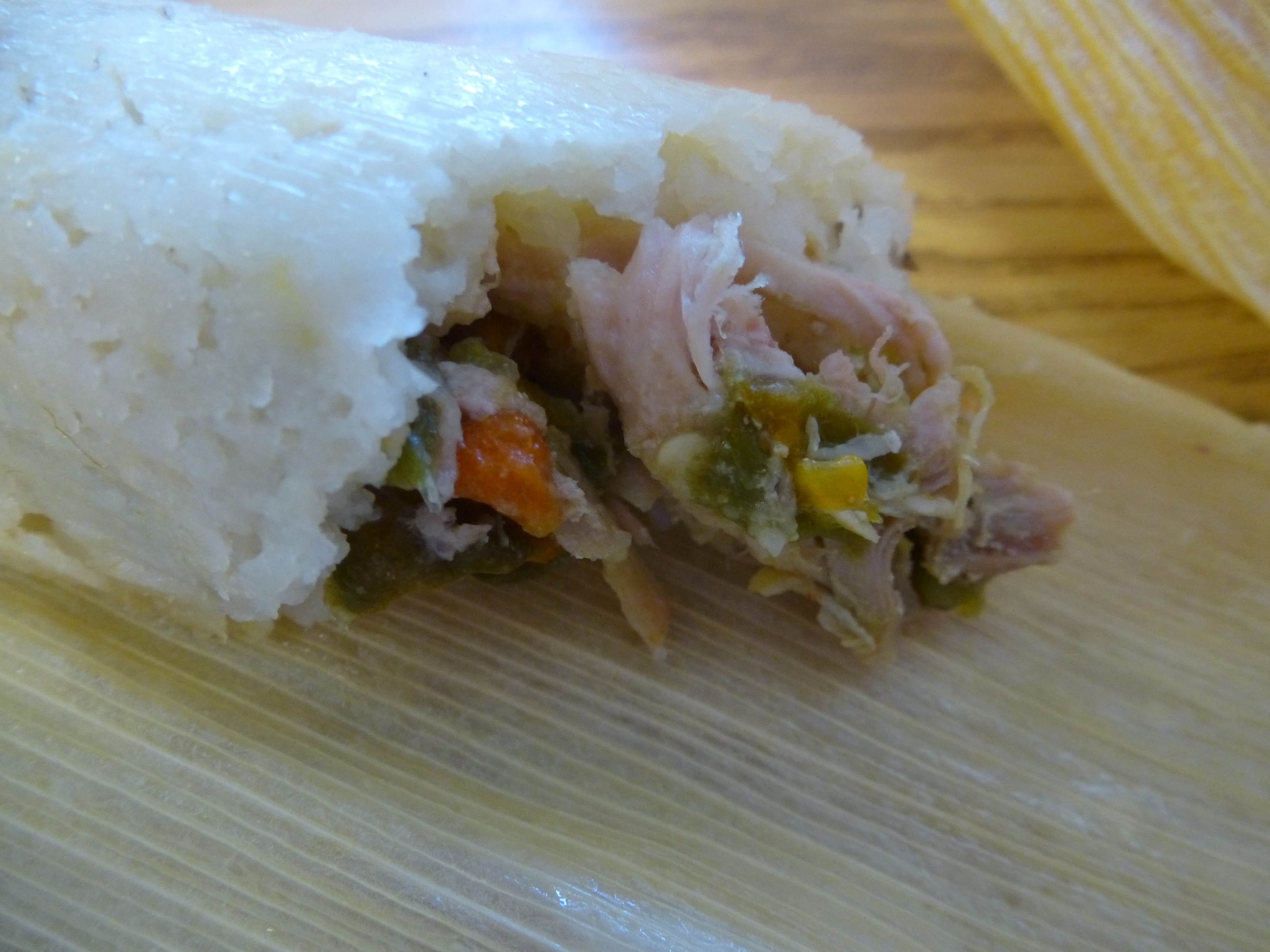 The bakery bit is a typical Mexican bakery, similar to those in Chicago. I love them because the procedure is to get a metal tray and tongs and pick out your own assortment of pastries. Of course this leads to one always buying too many, but they freeze well: 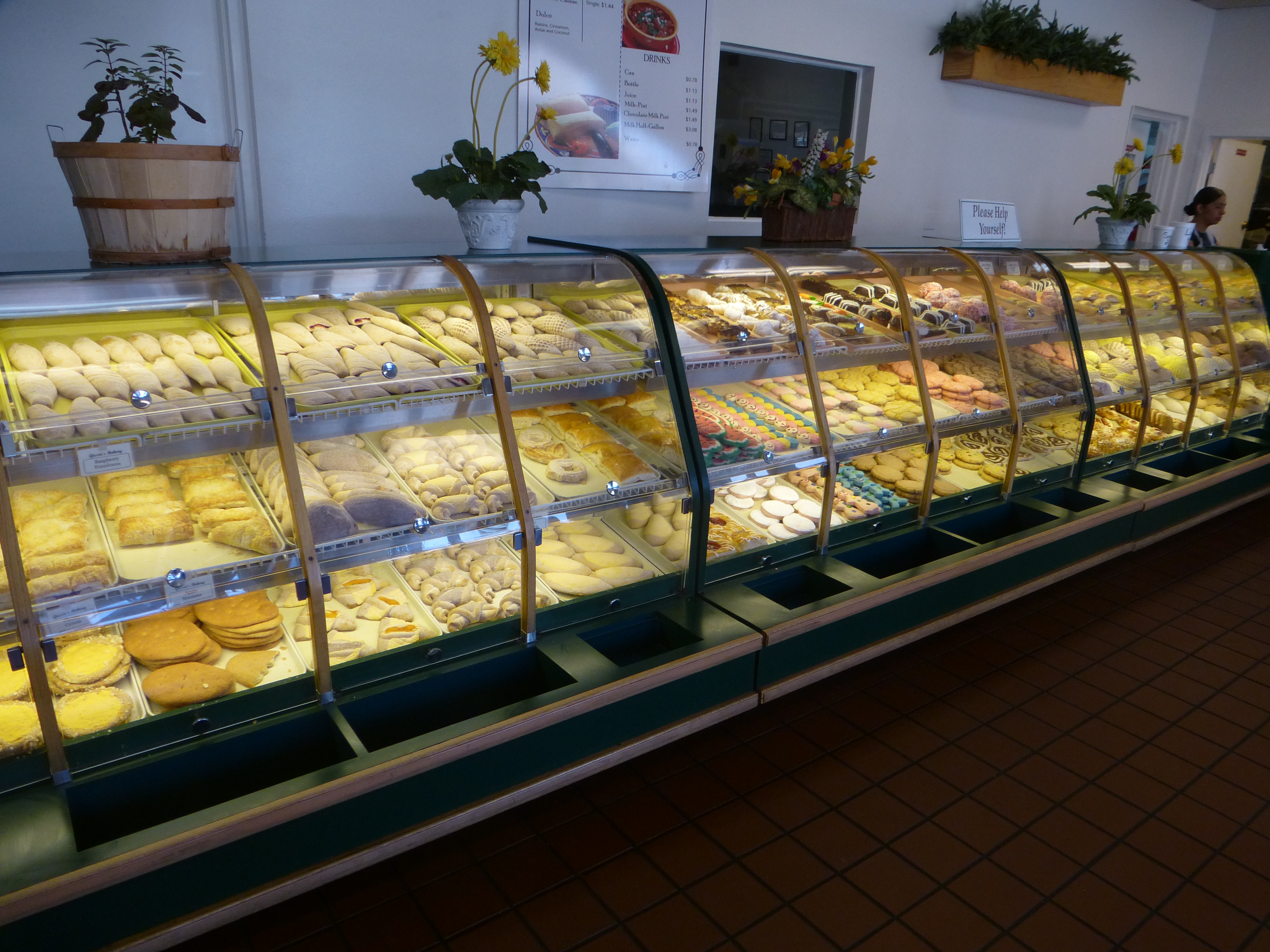 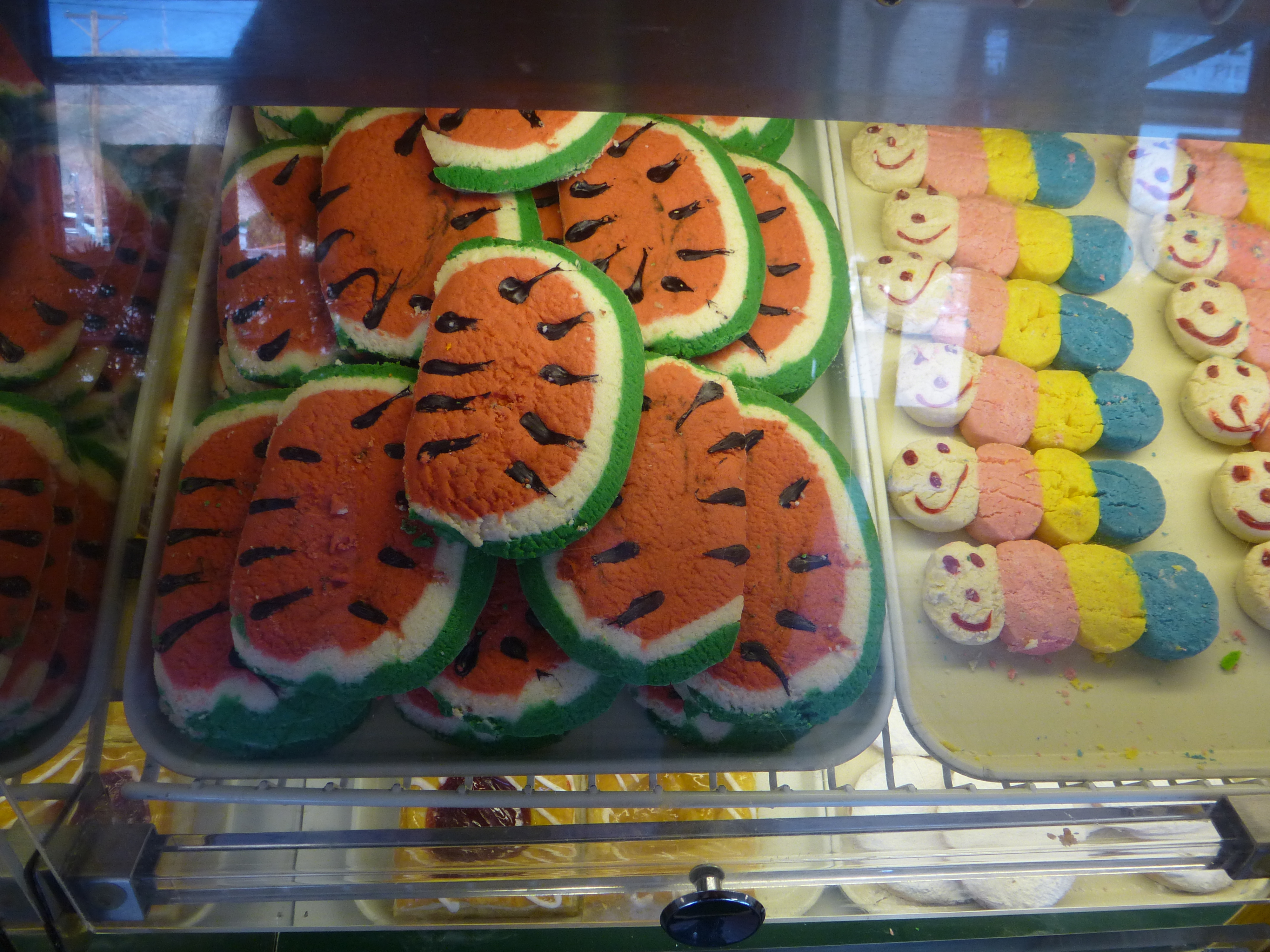 And so, with this cellphone tower decorated like a palm tree (do birds nest here?), I bid farewell to New Mexico (and Texas). It was a great trip, and many thanks to Bill and Avis for their generous hospitality! 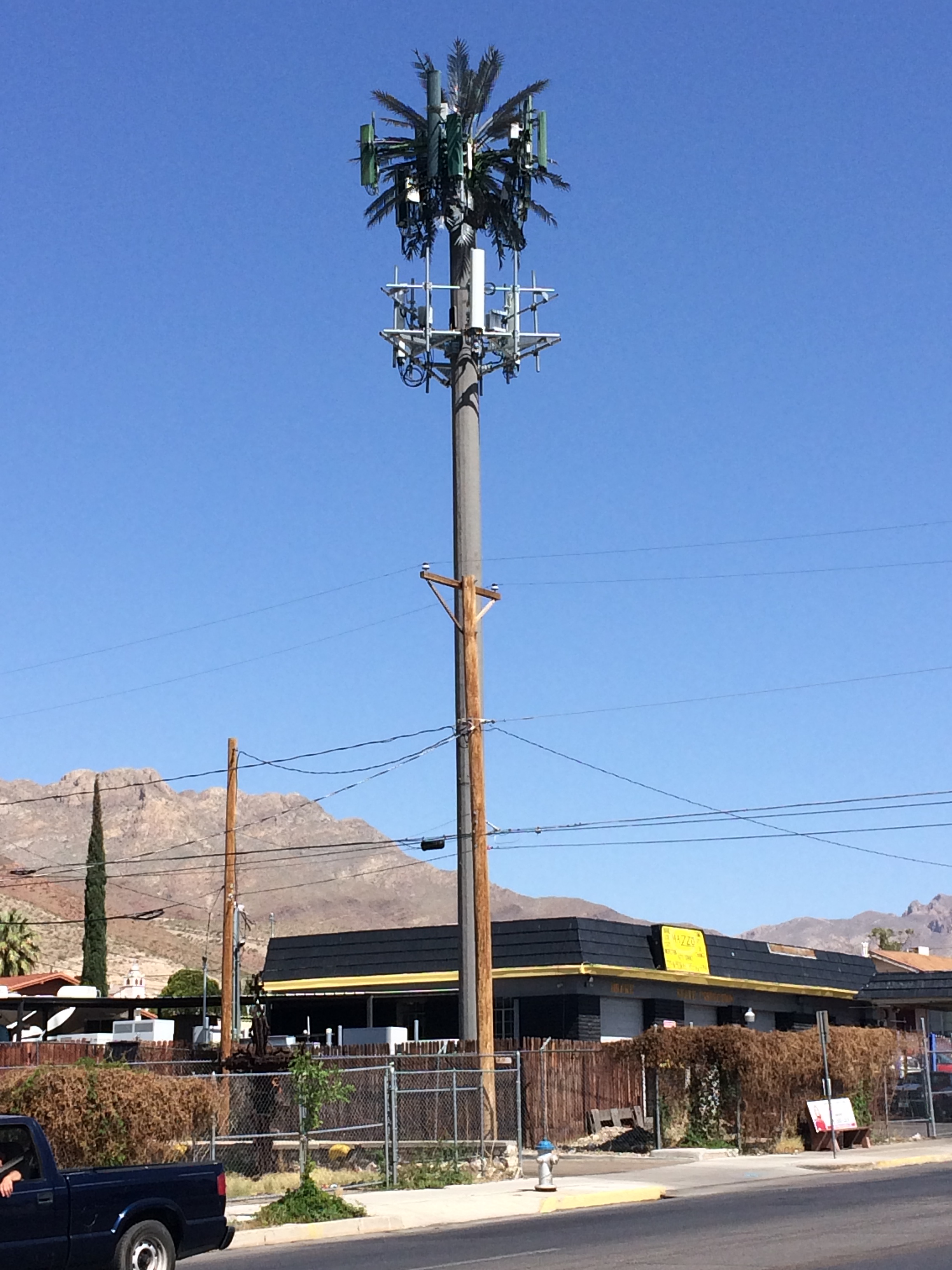