It’s sunny and snowing in Santa Fe as I write this morning, but I suppose it happens: after all, the town is nearly 7200 feet above sea level (ca. 2200 m). And it was chilly last night, so I’m glad I brought a fleece. 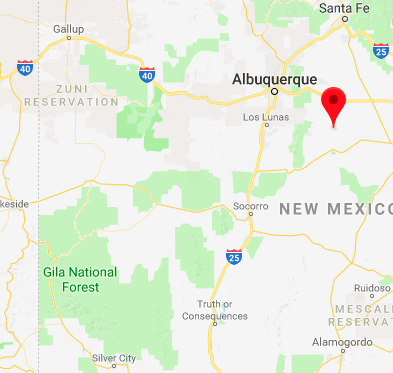 There are almost no towns and no traffic on this road, so I had a pleasant circuit, including having to watch out for elk (I didn’t see any): 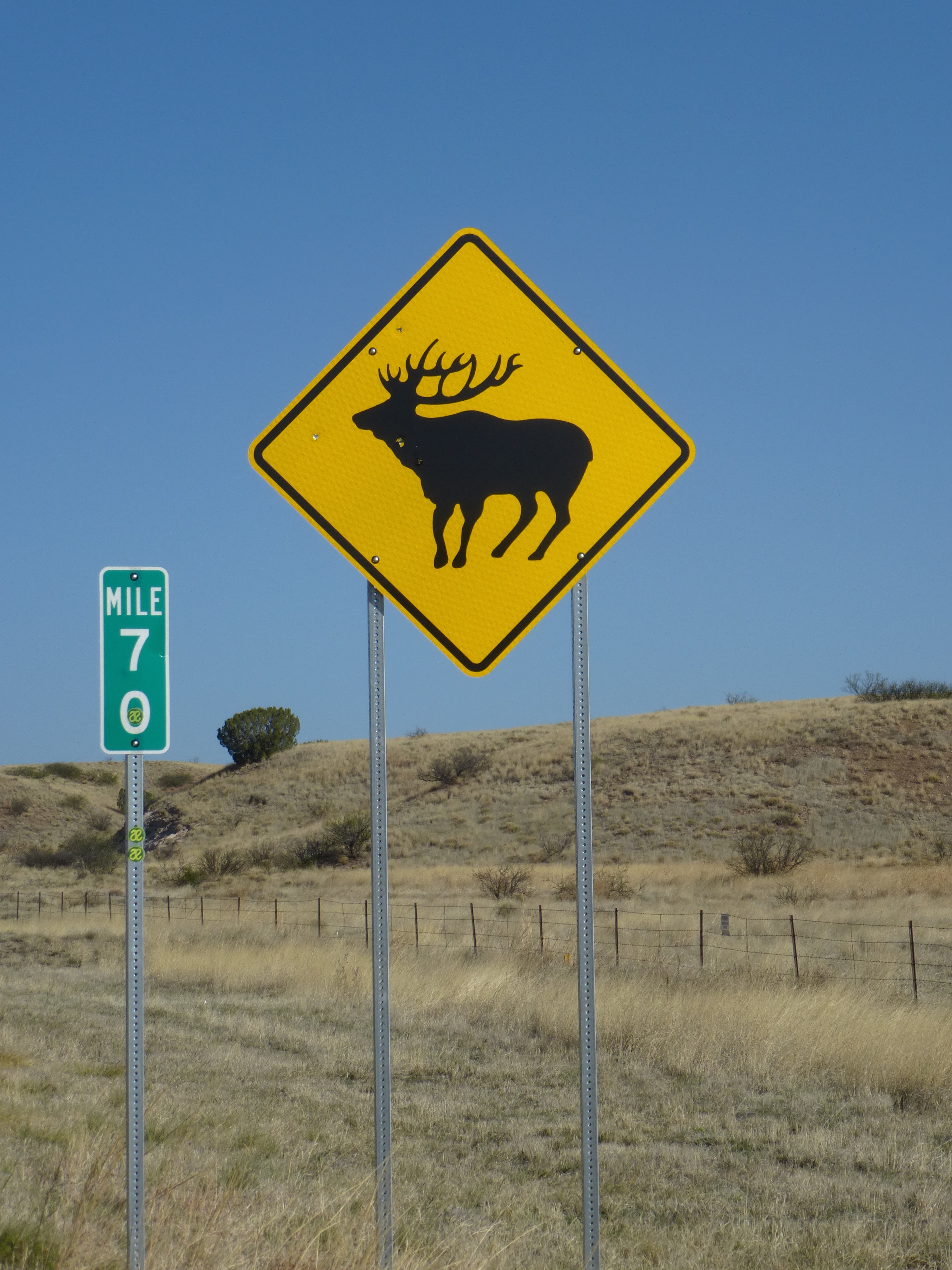 This is the Ceiling Cat RentalMobile parked in the middle of nowhere in the high desert. 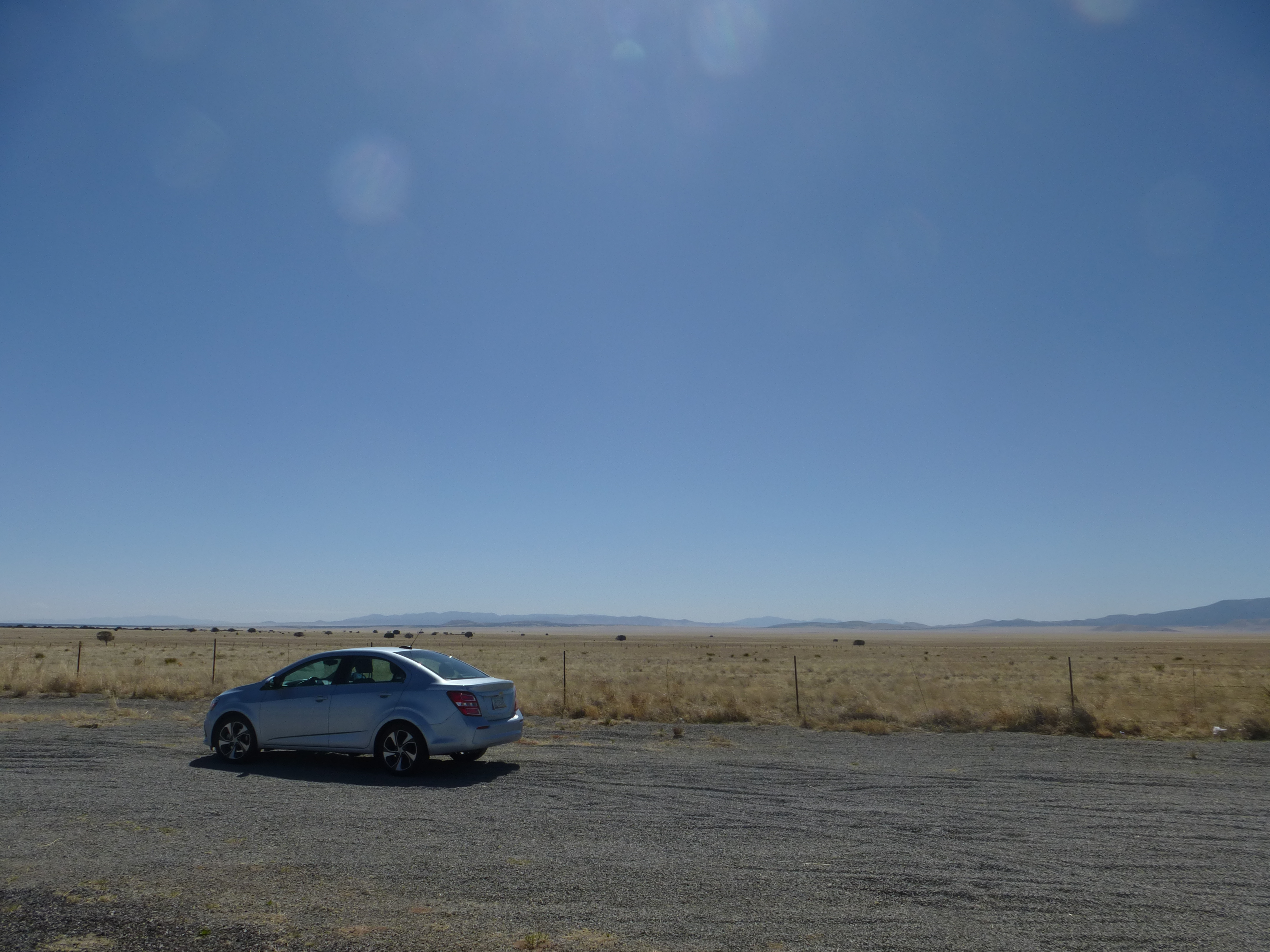 Between the towns of Datil and Magdalena sits a weird group of radiotelescopes in the desert: the Karl G. Jansky Very Large Array (known as the VLA), built between 1973 and 1980. There are 27 of the antennae (scopes) sitting alongside a Y shaped railroad route, which is how they’re moved about. Each arm of the Y is  13 miles (21 km) long. Here’s a view of a few of them north of the road, looking like weird mushrooms sprouting from the desert: 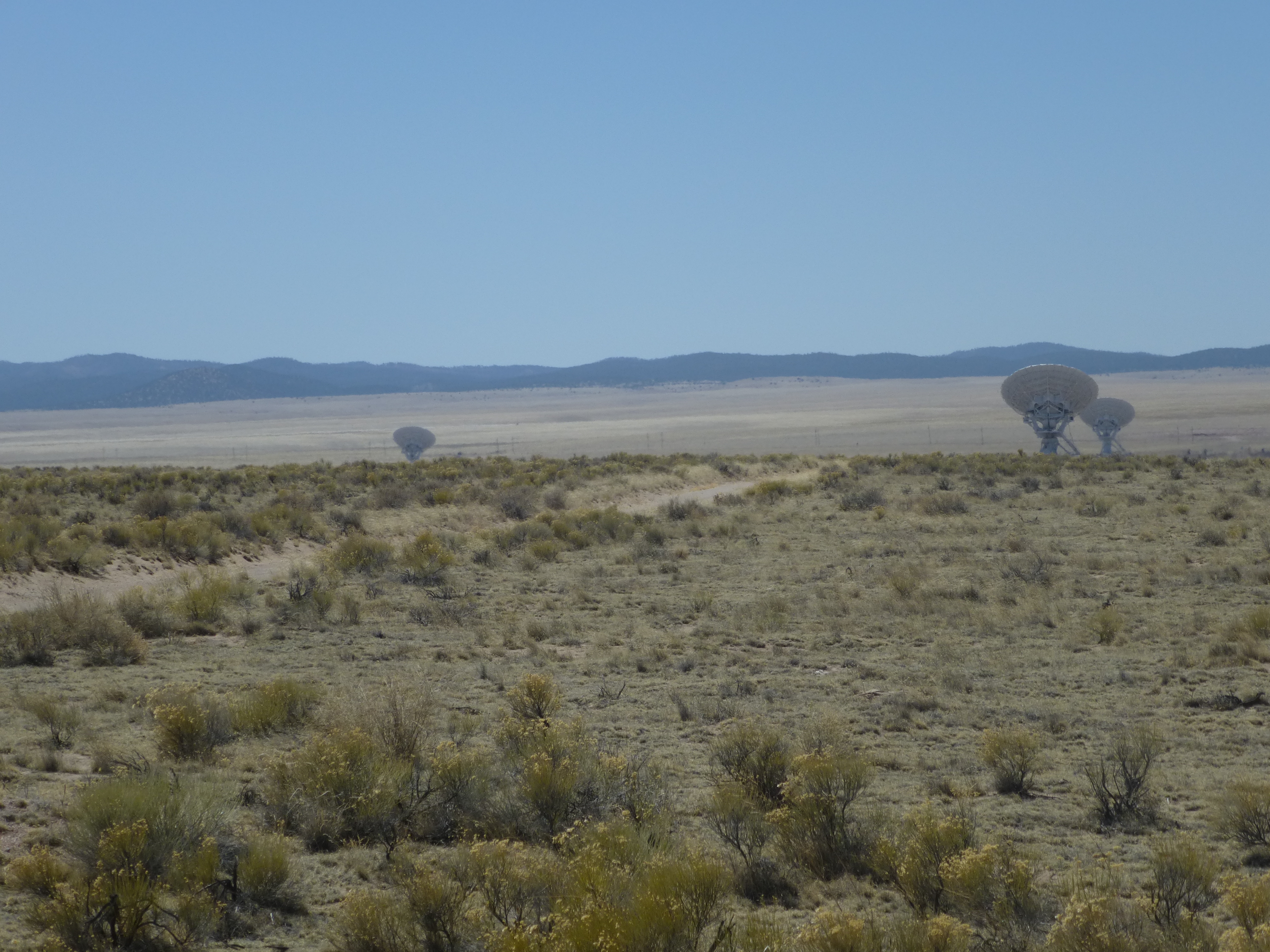 Wikipedia tells us how they’re used:

Each of the massive telescopes is mounted on double parallel railroad tracks, so the radius and density of the array can be transformed to adjust the balance between its angular resolution and its surface brightness sensitivity. Astronomers using the VLA have made key observations of black holes and protoplanetary disks around young stars, discovered magnetic filaments and traced complex gas motions at the Milky Way’s center, probed the Universe’s cosmological parameters, and provided new knowledge about the physical mechanisms that produce radio emission. 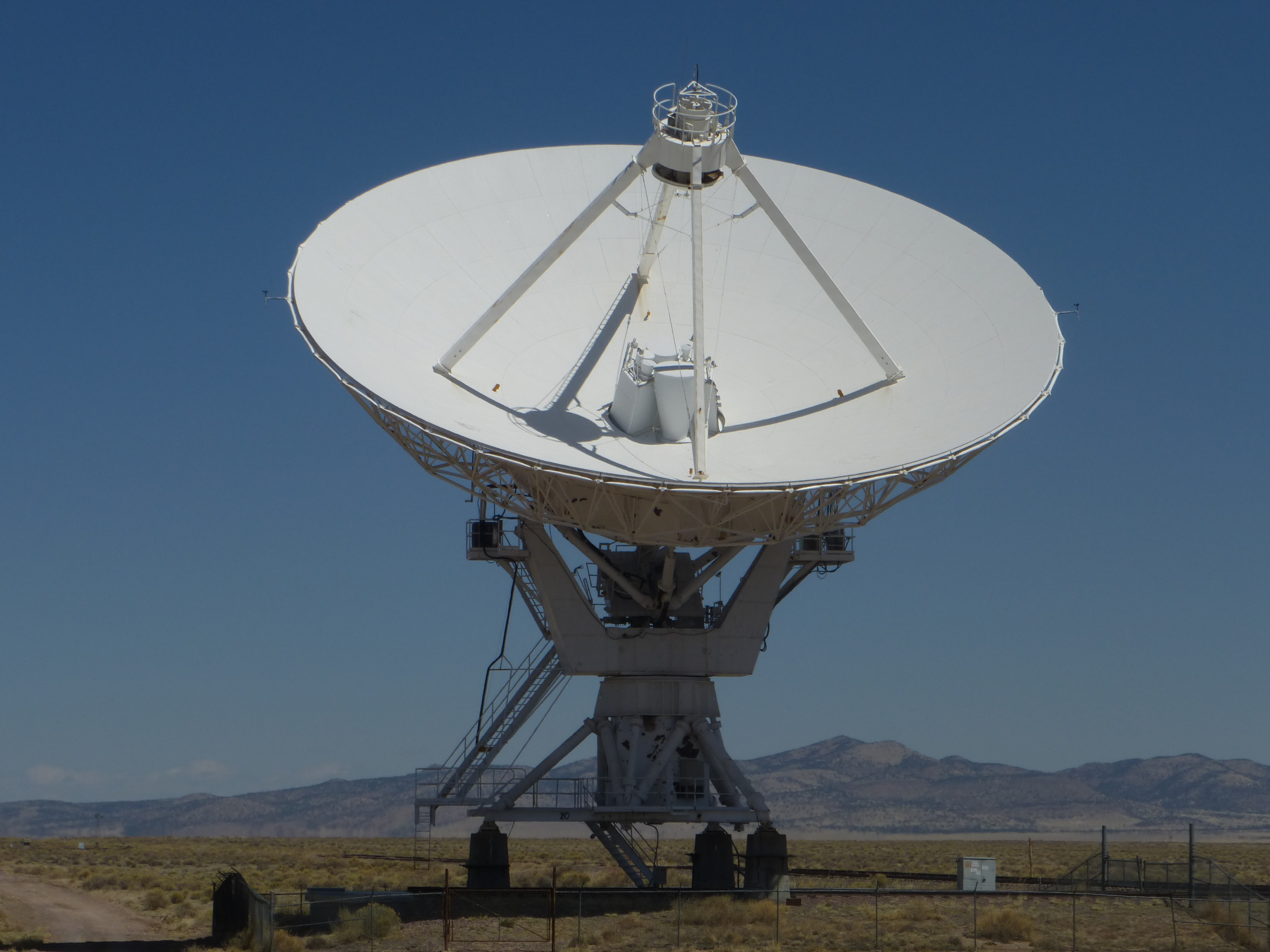 . . . at one point [JAC: see my pic below], [the railroad track] intersects with U.S. Route 60 at a level crossing—and a specially designed lifting locomotive (“Hein’s Trein”), the antennas can be physically relocated to a number of prepared positions, allowing aperture synthesis interferometry with up to 351 independent baselines: in essence, the array acts as a single antenna with a variable diameter. The angular resolution that can be reached is between 0.2 and 0.04 arcseconds.

There are four commonly used configurations, designated A (the largest) through D (the tightest, when all the dishes are within 600 m of the center point). The observatory normally cycles through all the various possible configurations (including several hybrids) every 16 months. 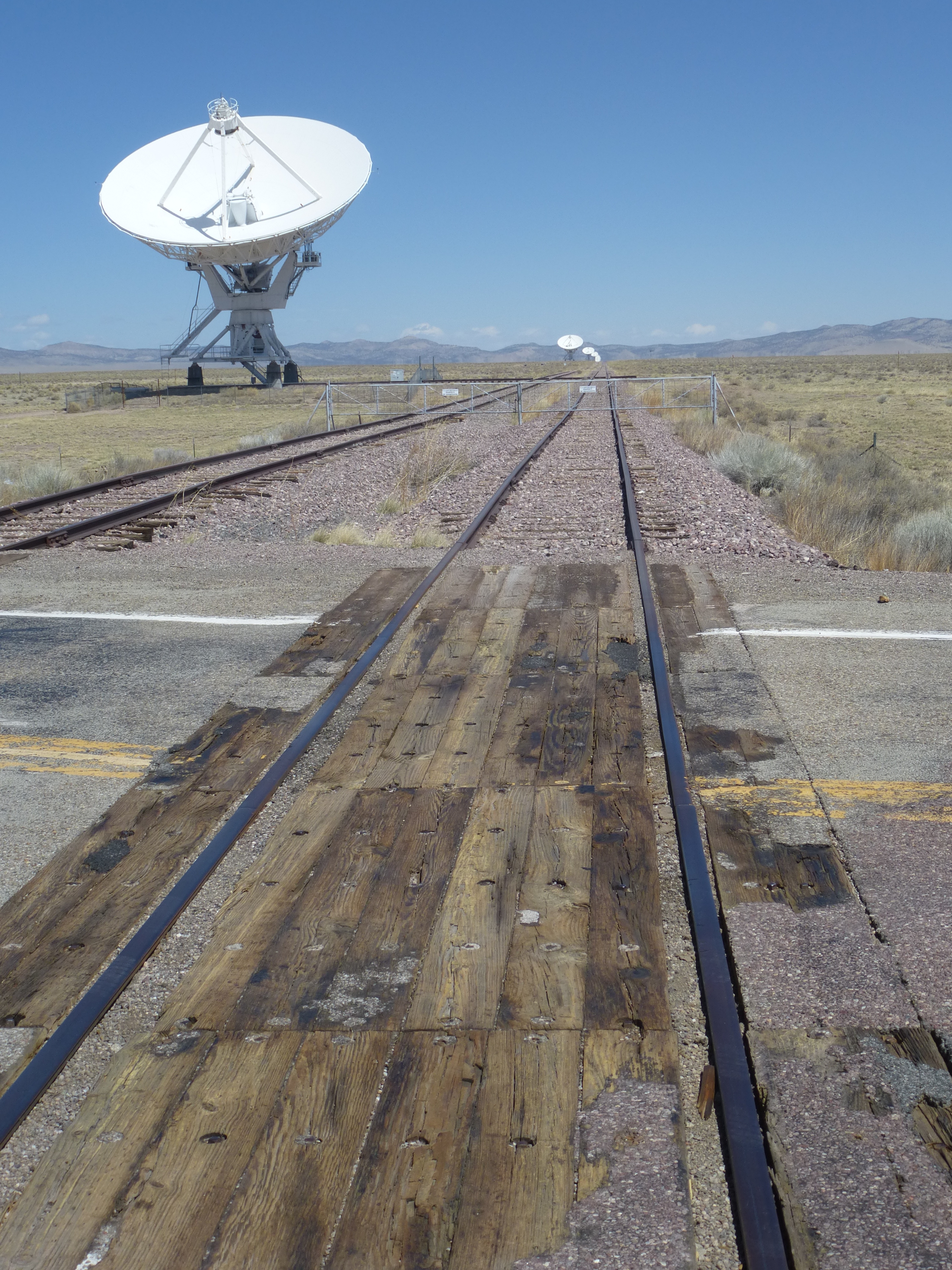 Finally, the article adds “The VLA is present in the 1997 movie Contact, as the location where the alien signal is first detected.”  Here’s a better picture from Wikipedia: 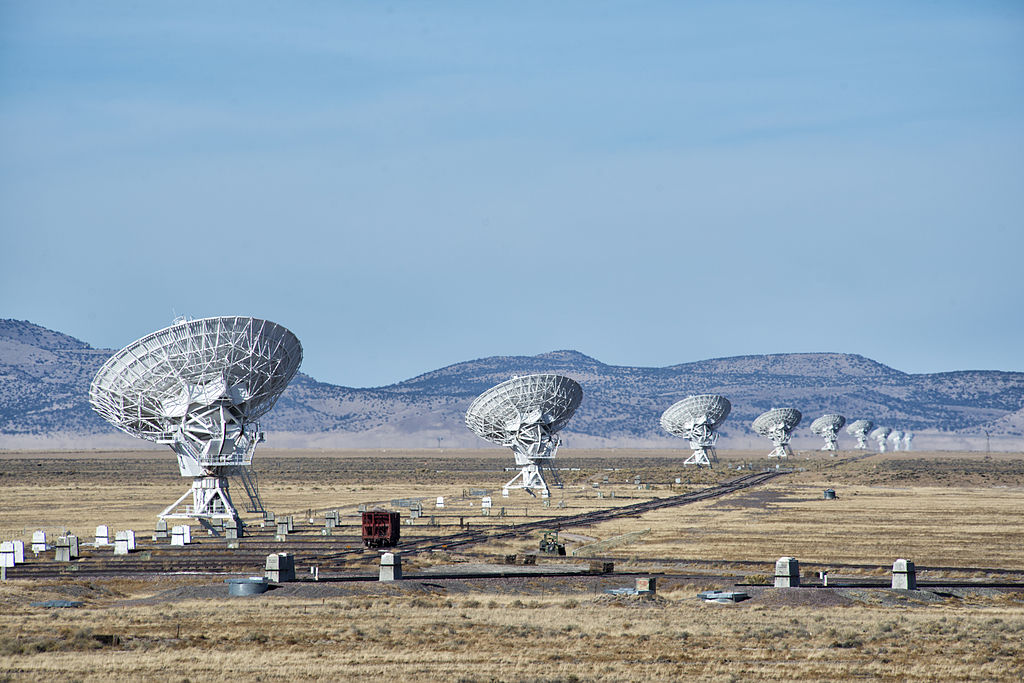 I eventually reached Interstate 25 at the town of Socorro, where friends told me to eat at the New-Mex/Mex restaurant of Sofia’s Kitchen (full name: Sofia’s Kitchen and Burrito Tyme).

I lucked out, as chile relleno, one of my favorite dishes, was on special. It’s Mexican and originated in the city of Puebla, where I went to a meeting just a few months ago. There are of course variations, but they all involve a roasted green pepper stuffed with either meat or cheese (I favor cheese), and then breaded and deep-fried. It’s then covered with either green or red chile sauce and, often, more cheese, like the one below, which was served with refried beans and Spanish rice, with a tortilla on the side. The combination of the breading, sauce, vegetal pepper, and molten cheese is fantastic: 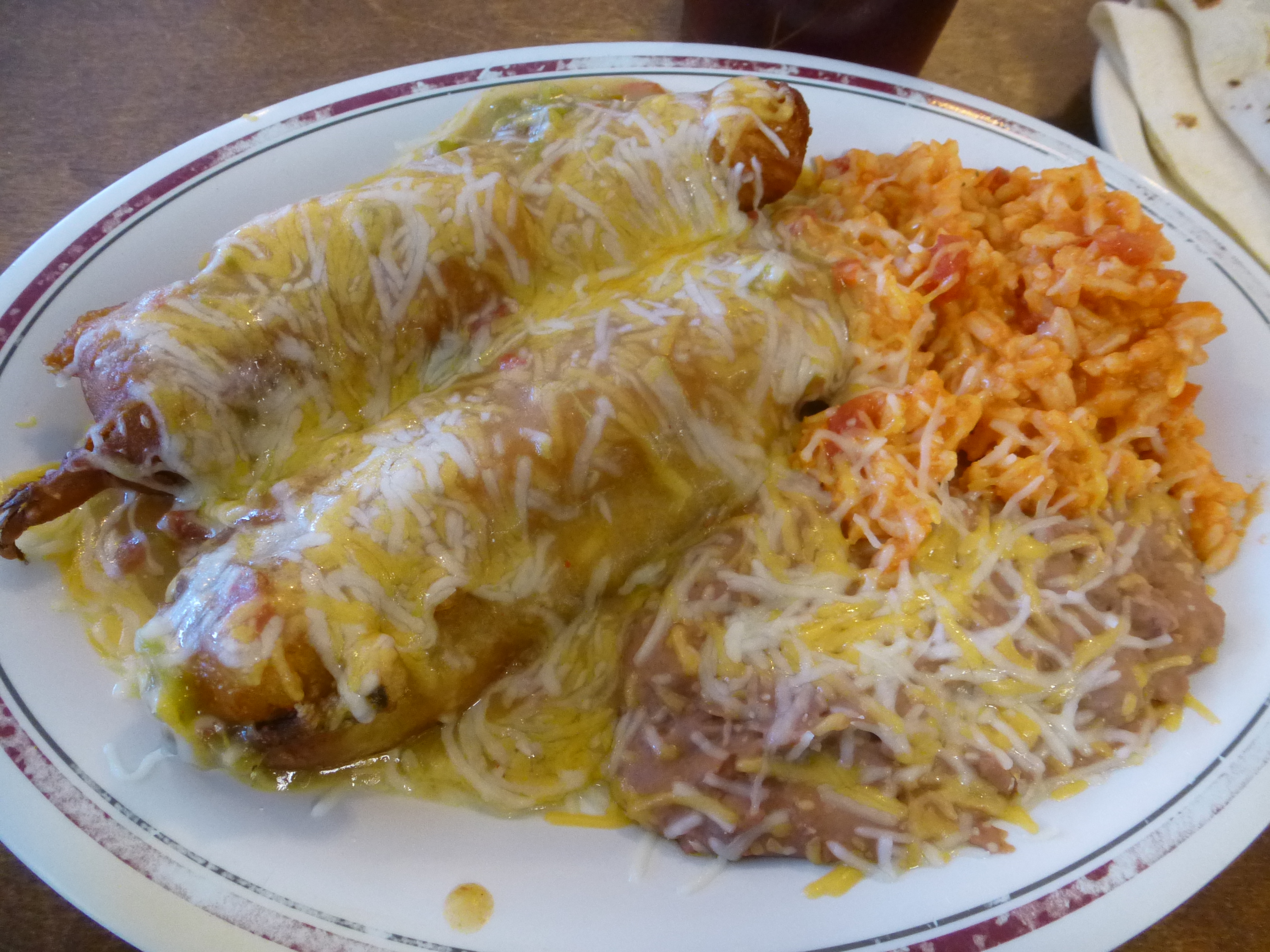 The inside of the breading, showing the cheese-filled pepper: 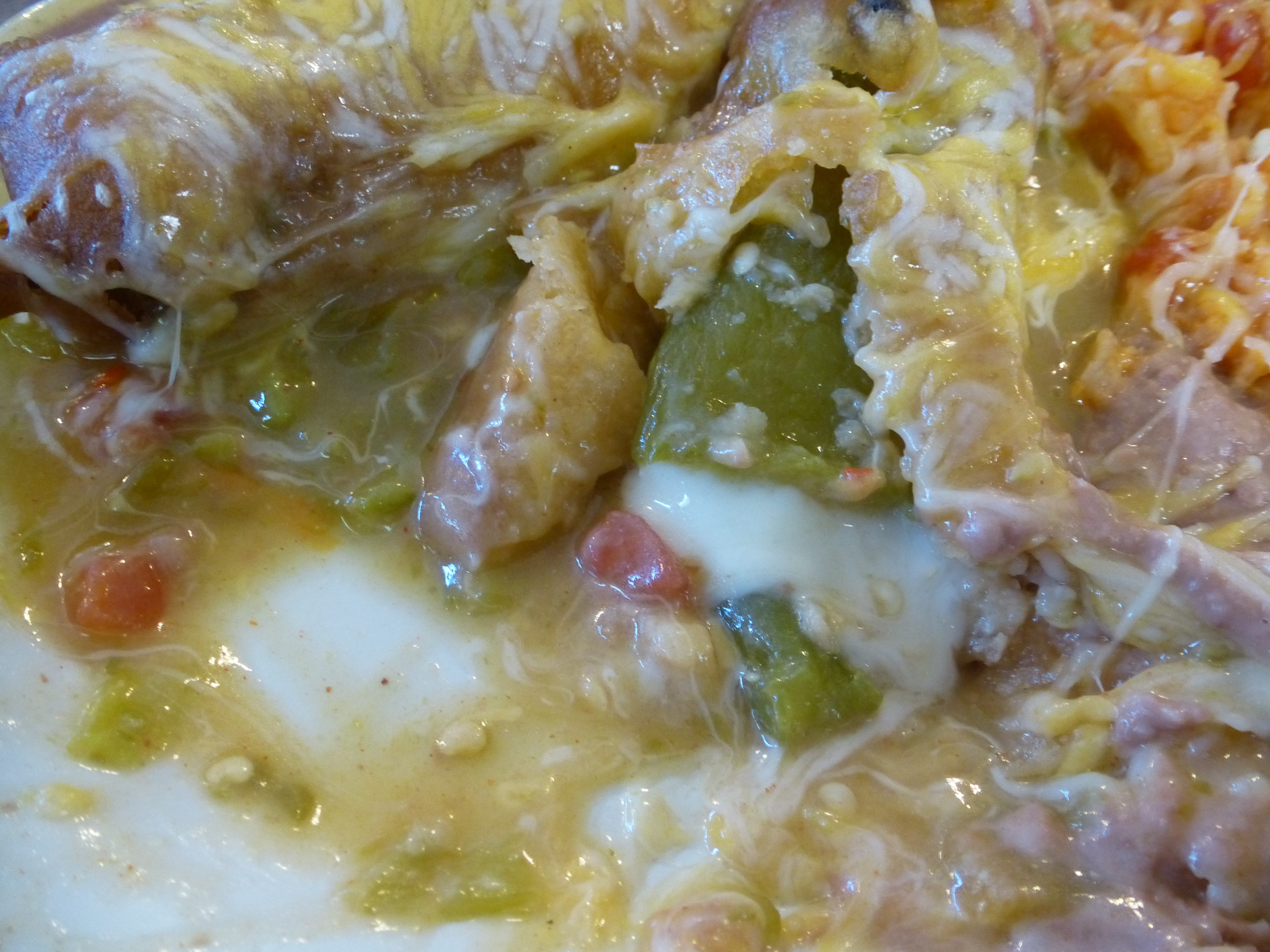 Santa Fe (population about 84,000) is of course one of the most famous tourist cities of the American Southwest, and rightfully so. It’s lovely and full of local architecture, modeled on the adobe dwellings of the local Native Americans. This is the plaza, first settled by the native Tewa around 900 AD. It’s still the center of town: 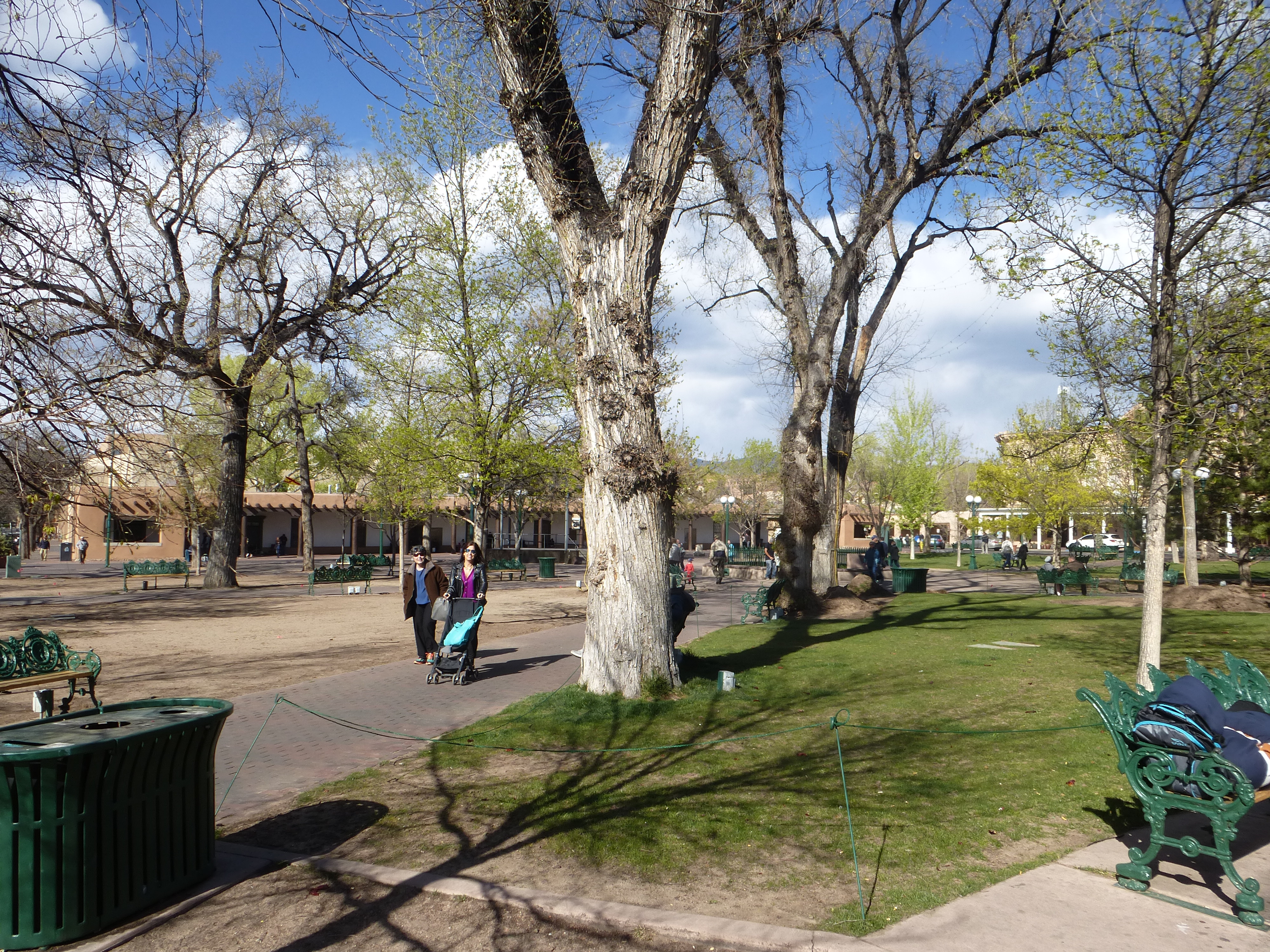 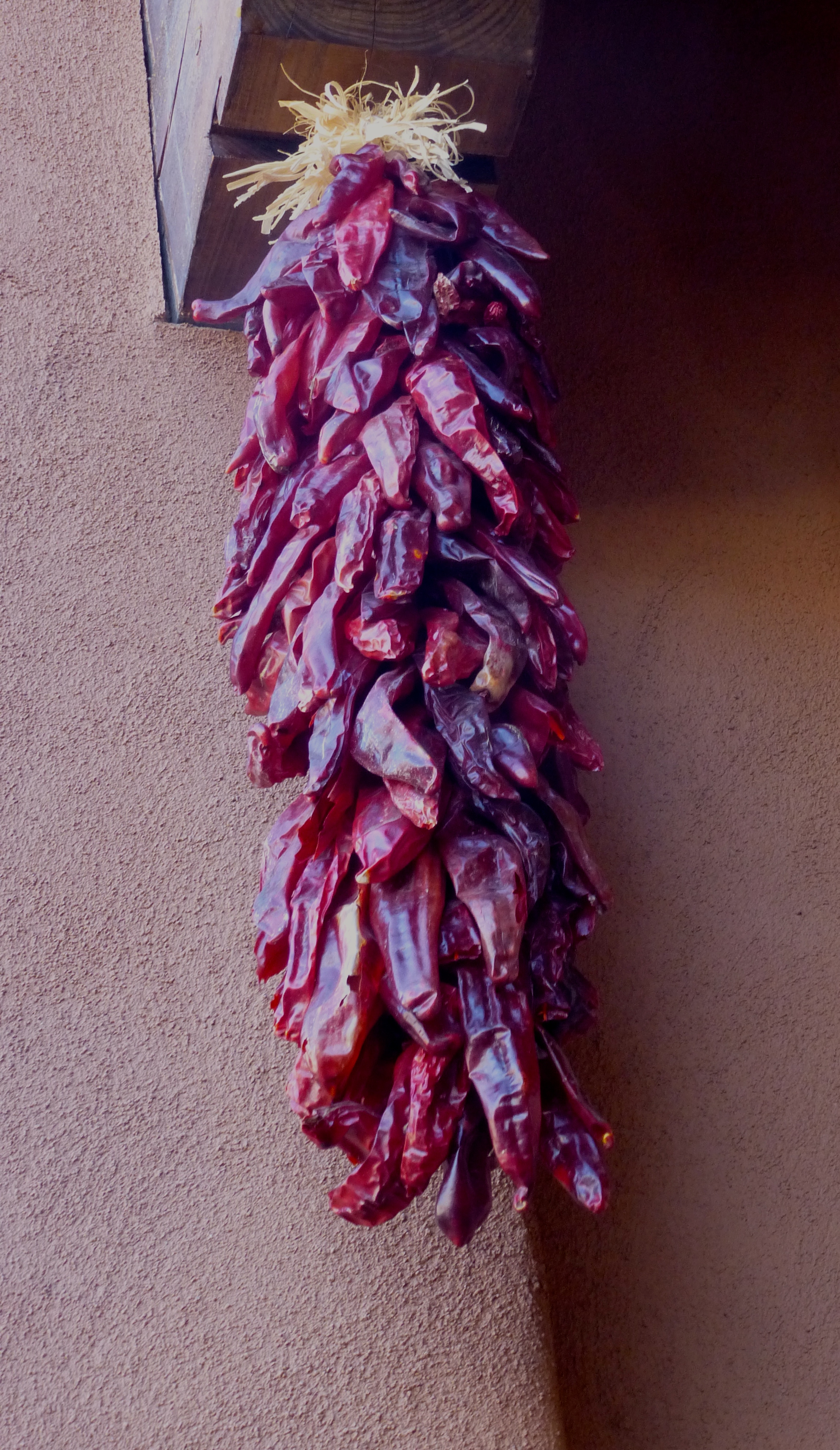 These adorned animals must have some connection with local Native American tradition, but I have no idea what they are. The jaguar is particularly resplendent: 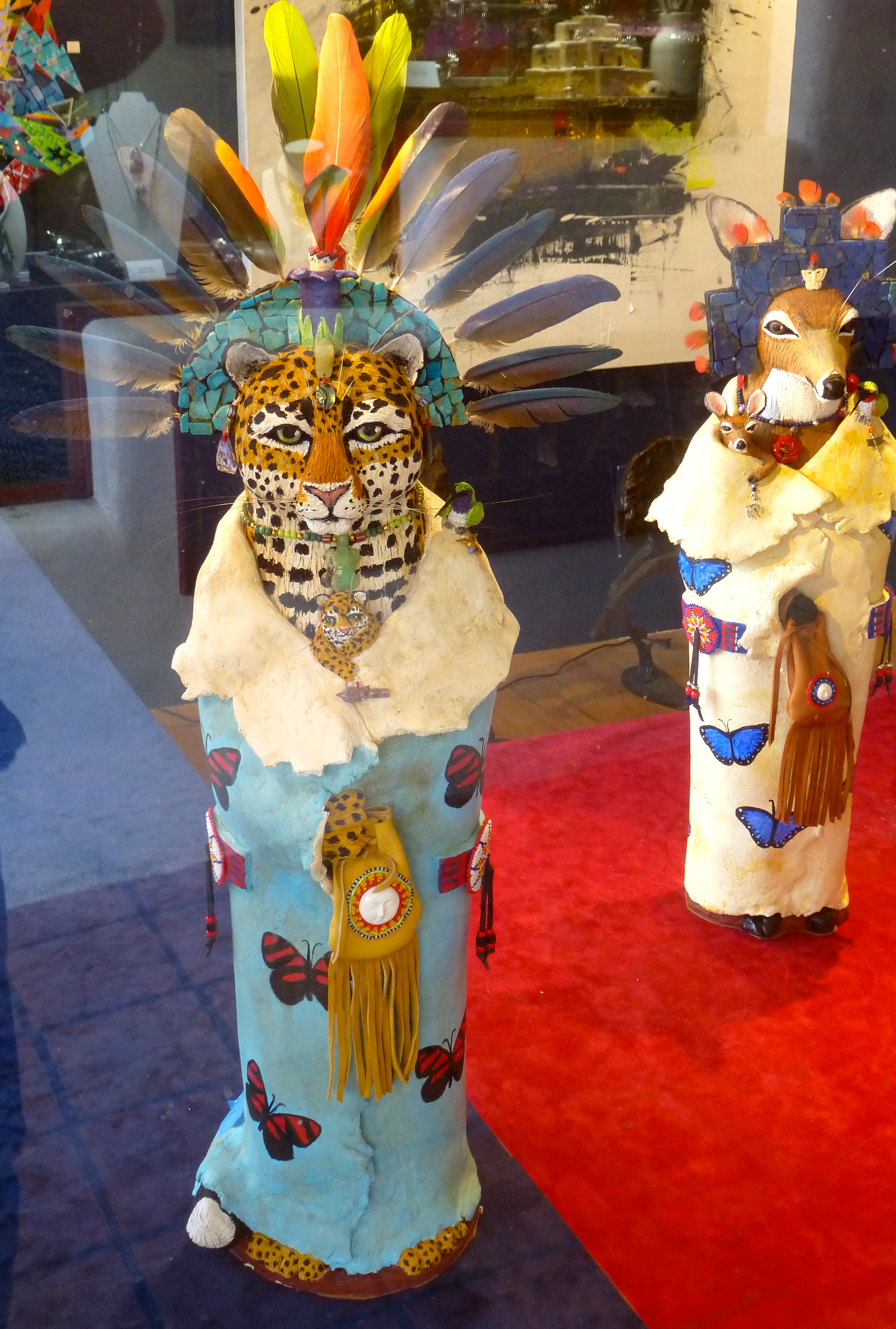 Around the plaza; I liked all the blue colors: 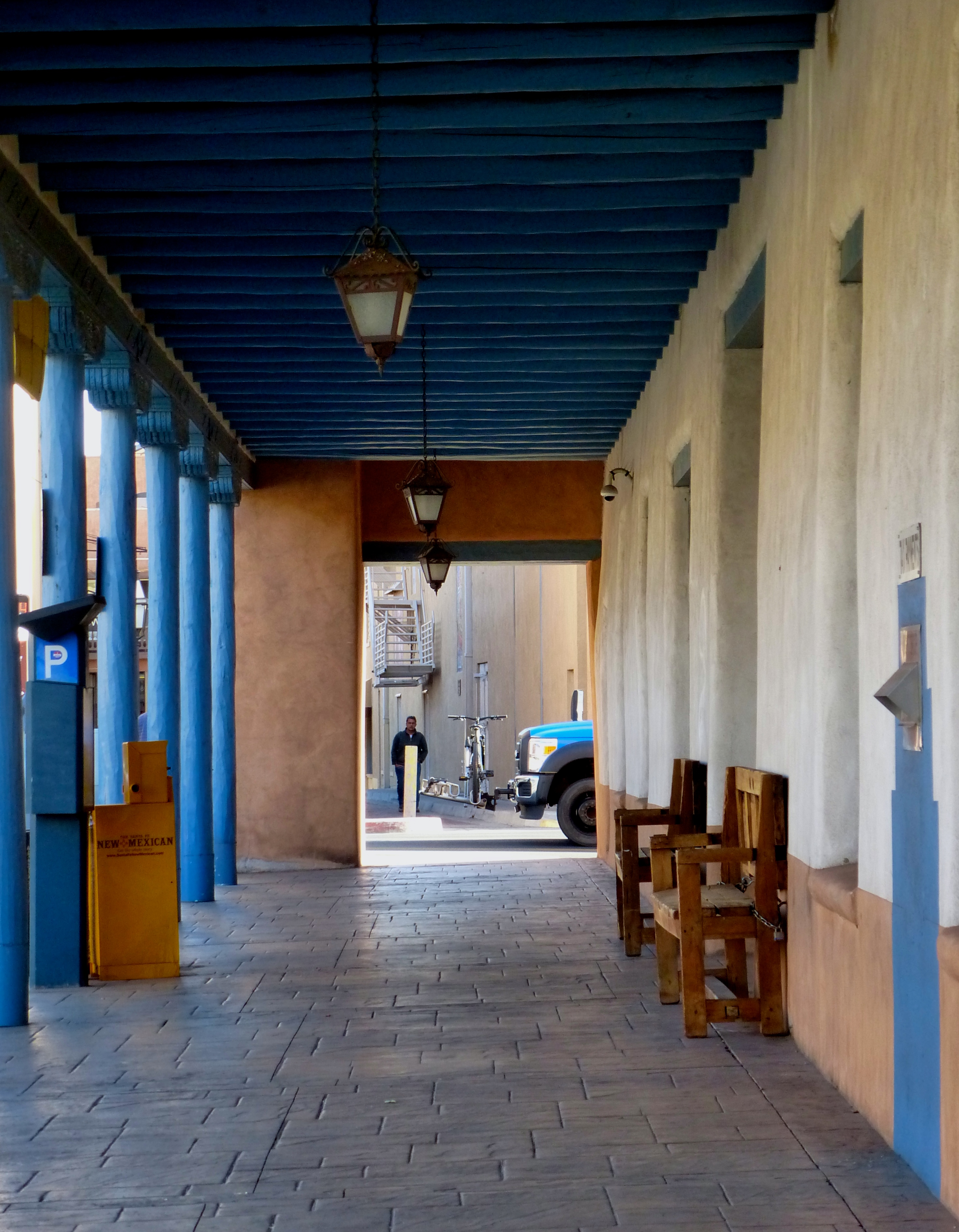 I don’t know who this chap is, but I bet his party has something to do with marijuana: 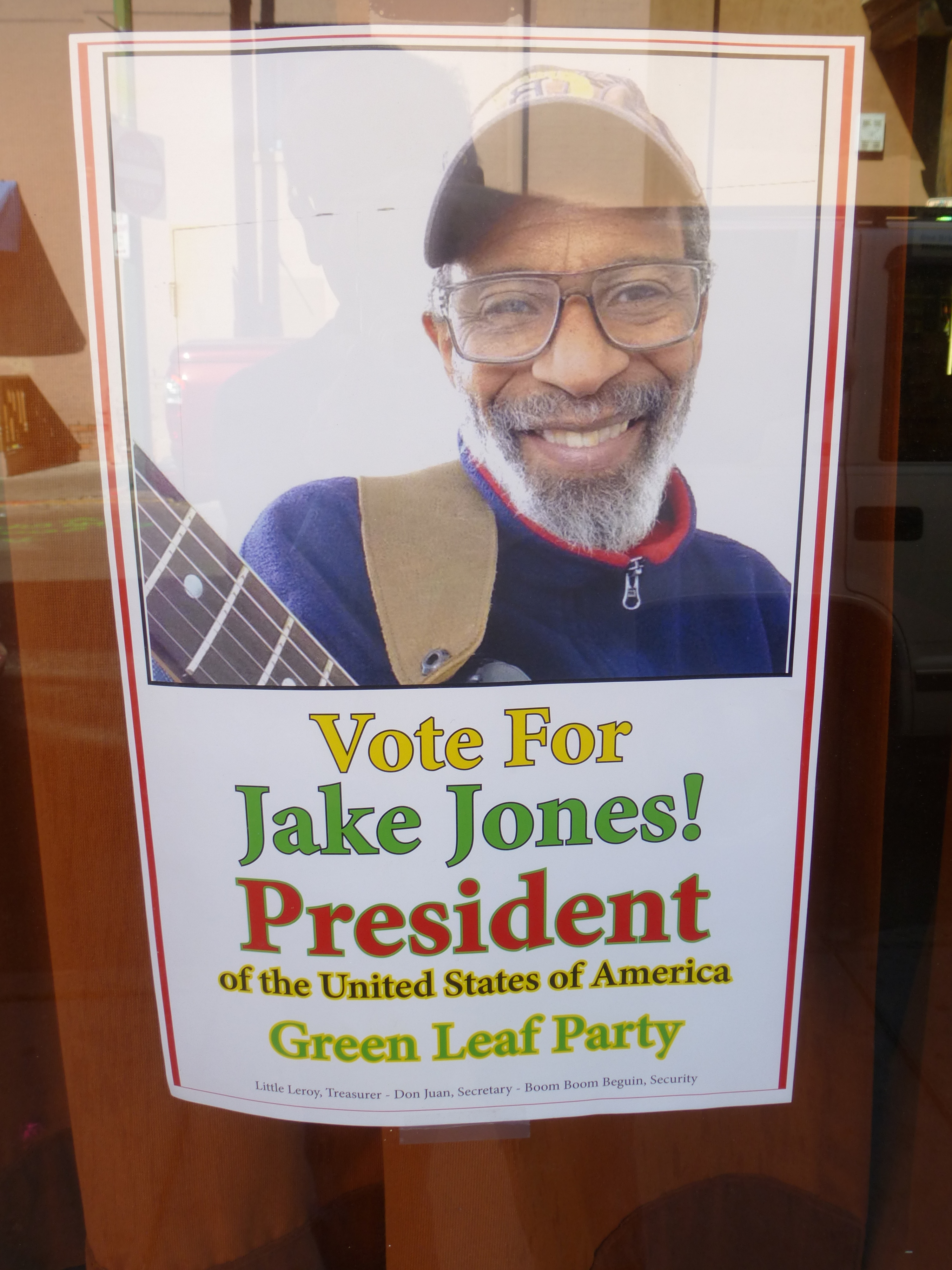 A local tree of some sort (a birch?). The scars on the trunk looked so much like eyes that I thought someone had painted them on: 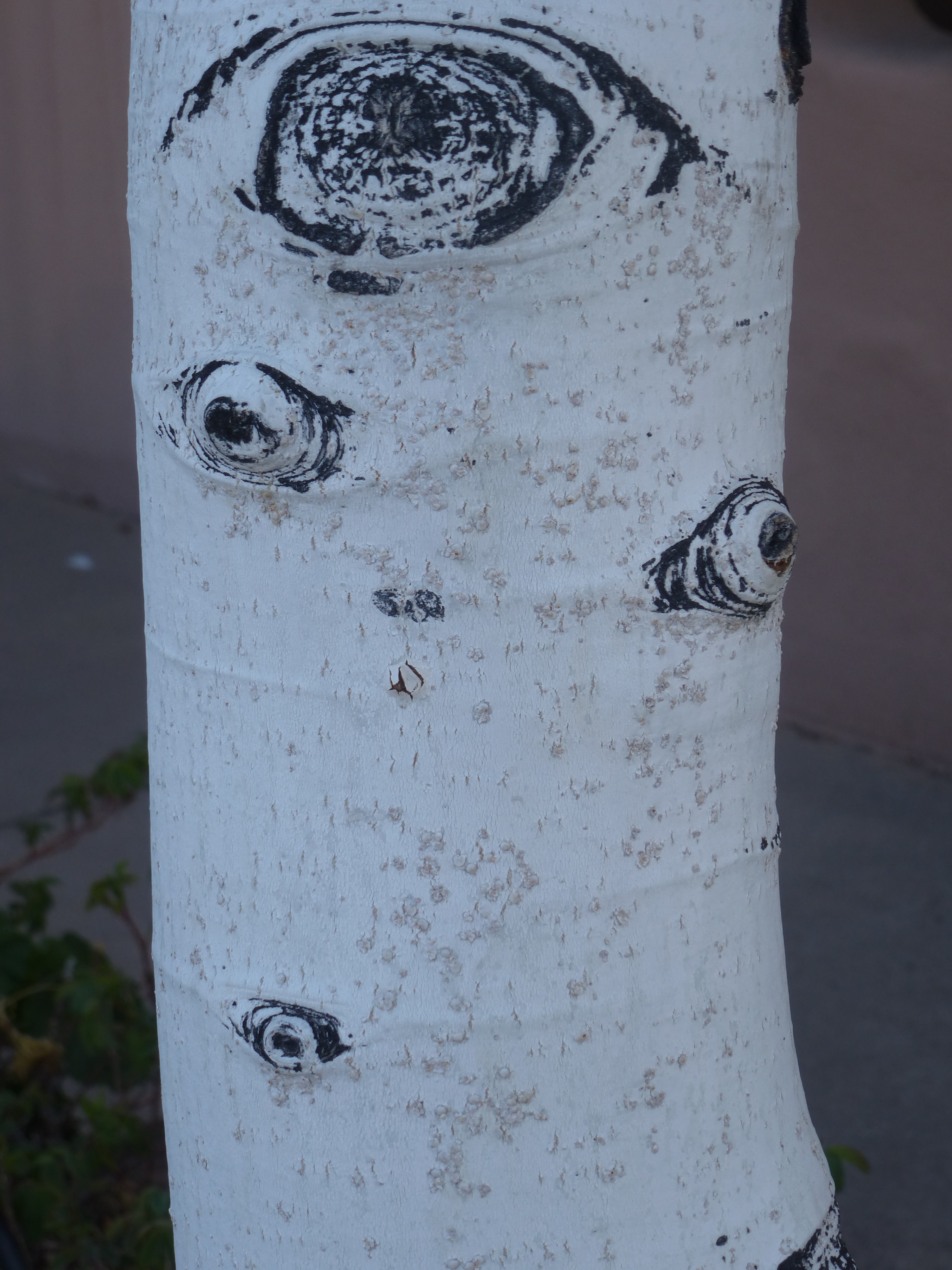 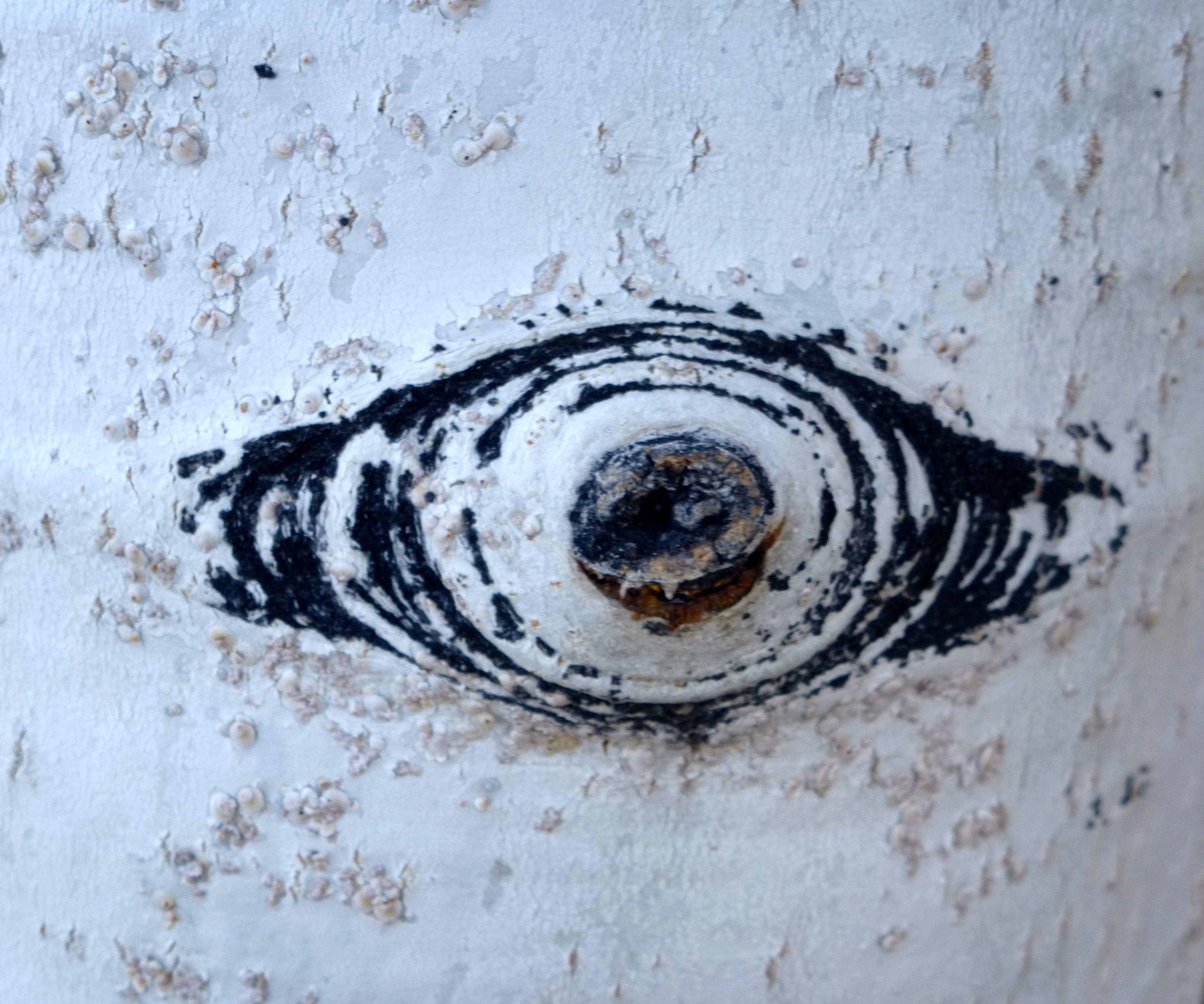 With all the great local food, it was no surprise to see the “Chicago Dog Express” not only devoid of customers, but closed. Get your Chicago dogs in Chicago! 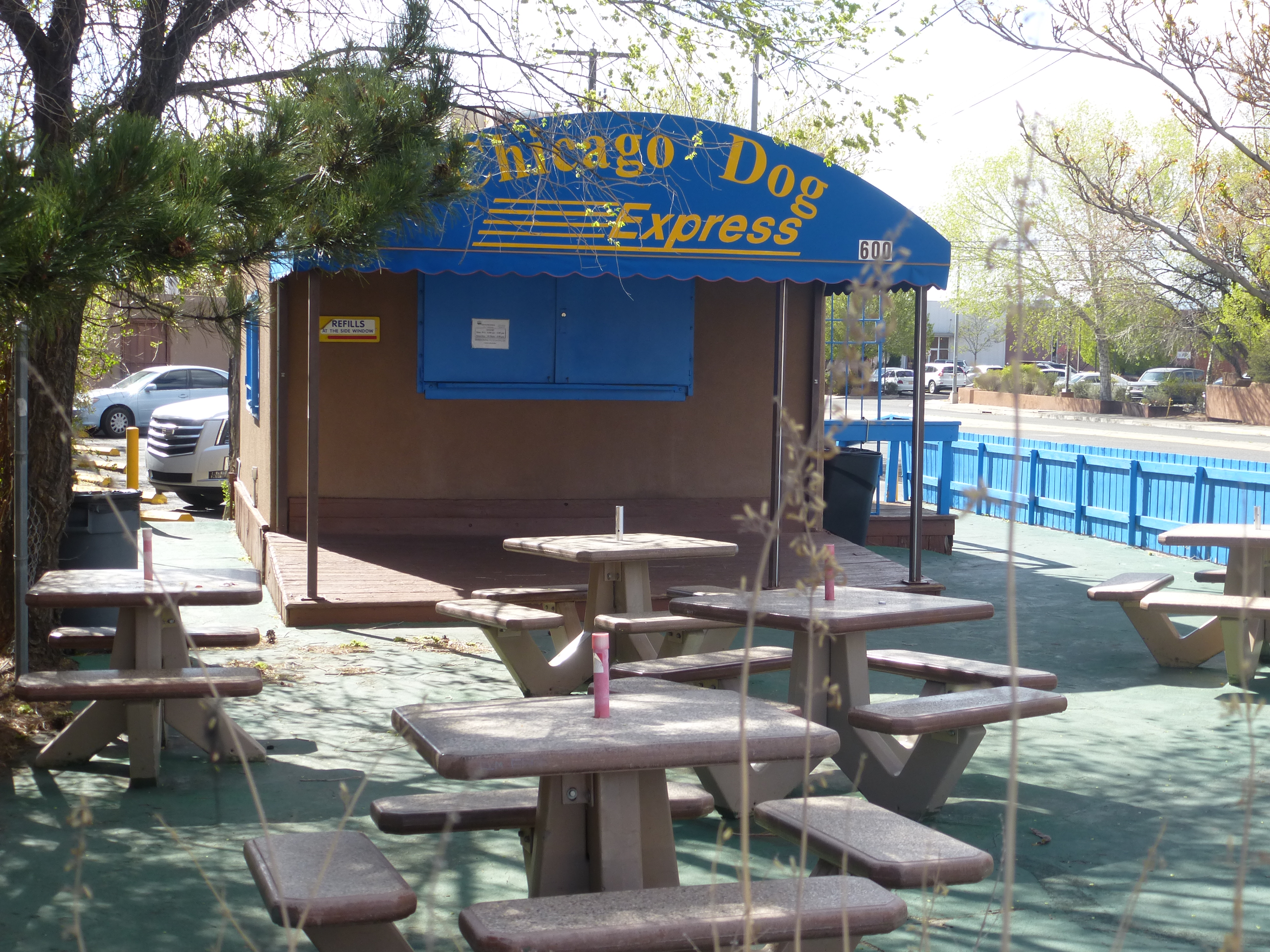 I spent two pleasant hours in the Georgia O’Keeffe Museum near the Plaza. Most of you know of O’Keeffe, one of America’s greatest painters, famed for her colorful landscapes and large paintings of flowers, bones, and other artifacts.

Born in Wisconsin in 1887 (she died at 98), O’Keeffe lived in New York City for many years, marrying the famous photographer Alfred Stieglitz. She discovered the beauty of New Mexico in 1929, and spent several months painting in the state until she moved here permanently after Stieglitz’s death. The Museum harbors what must be the largest collection of her paintings in the world, and also contains lots of photographs of her at her famous Ghost Ranch house, as well as photos taken by Stieglitz, who used her as a subject. Here’s the entrance to the Museum, which, fortunately, was open late on Friday: 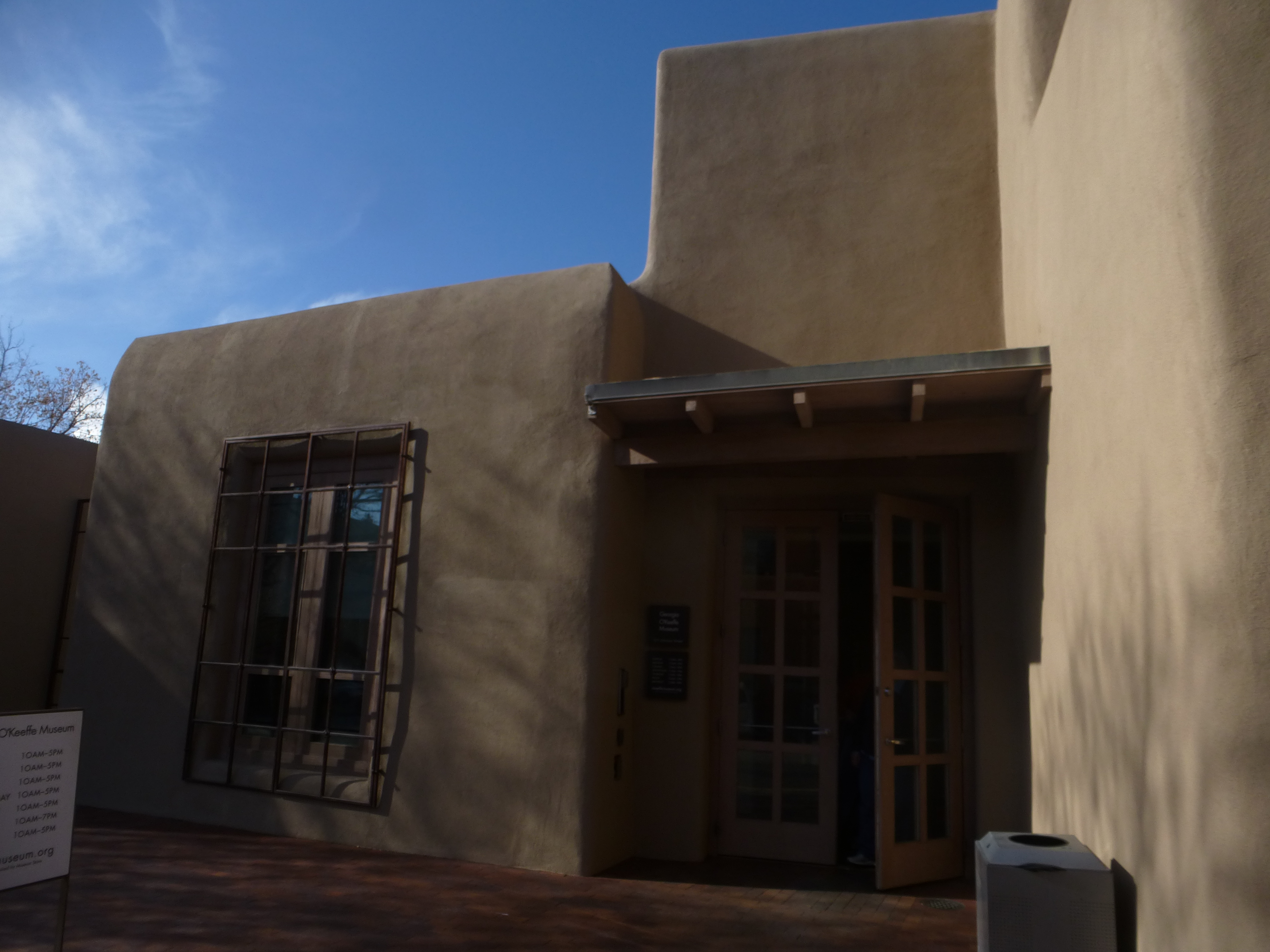 Here are some of her paintings that I liked. She began with more conventional art: portraits, still lifes, and so on, but found her true painting “voice” in New Mexico. The first painting is early; the rest are classic O’Keeffe. You’re allowed to photograph the art so long as you don’t use a flash, so excuse the quality of these hand-held photos of paintings: 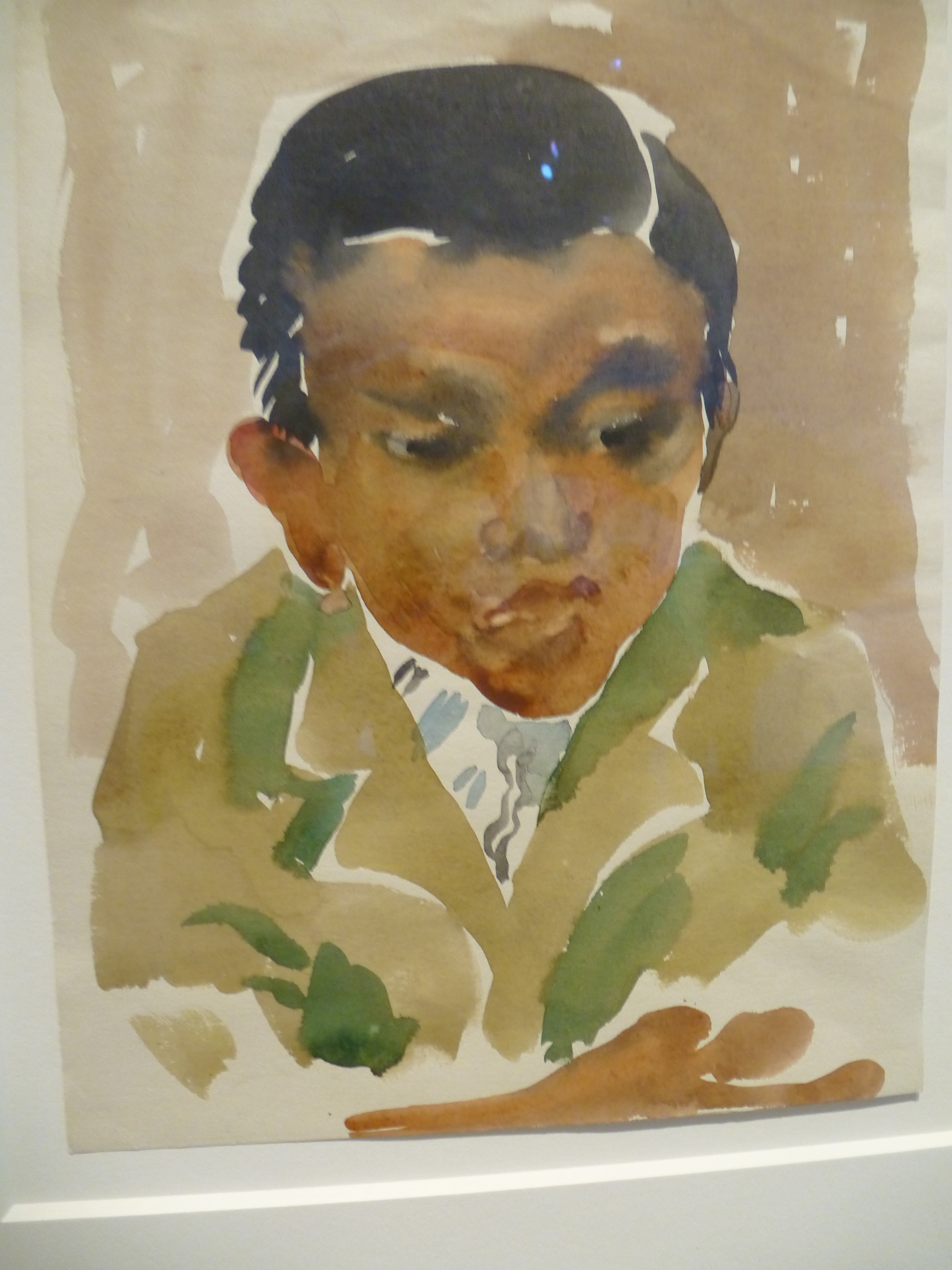 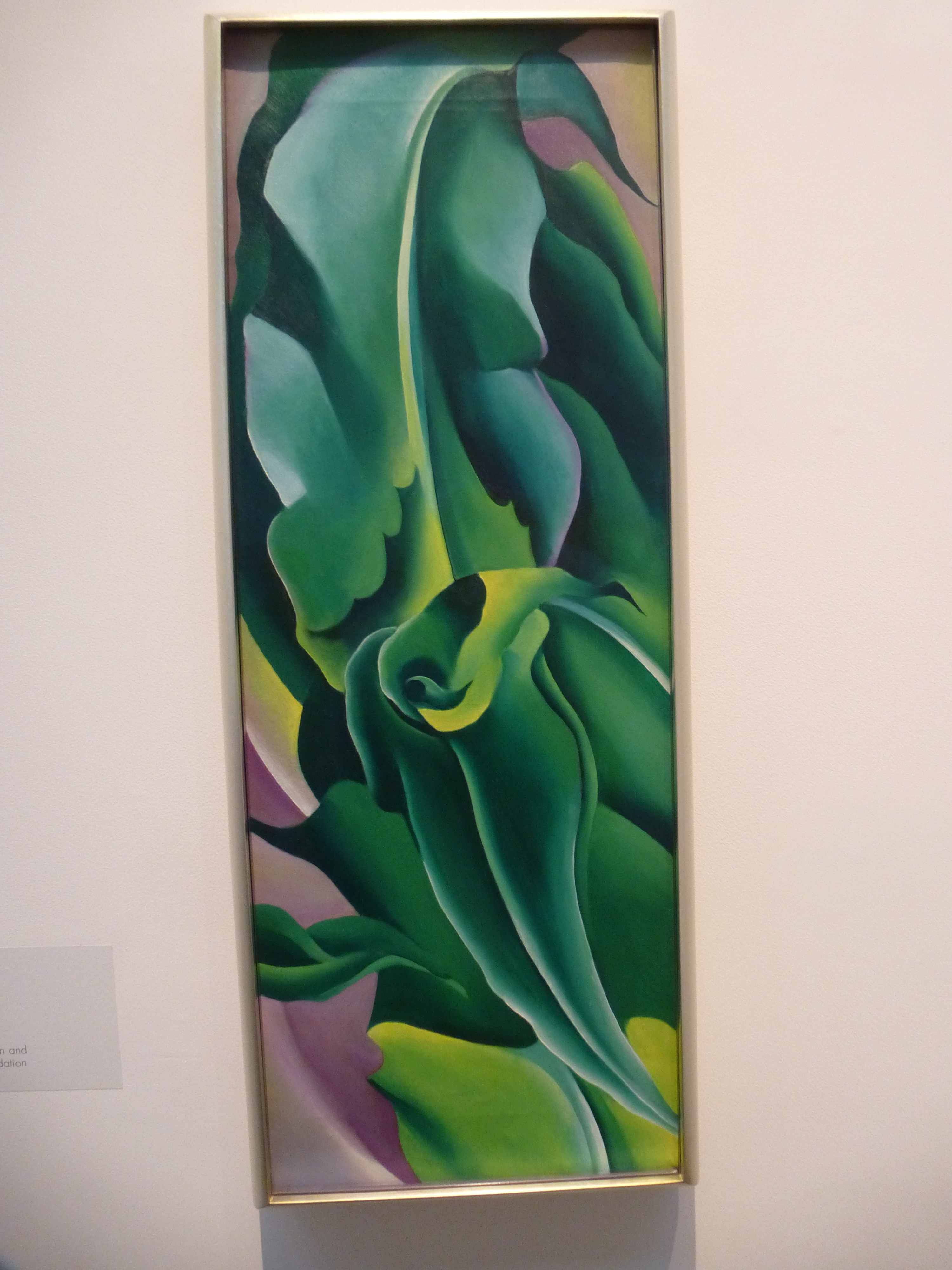 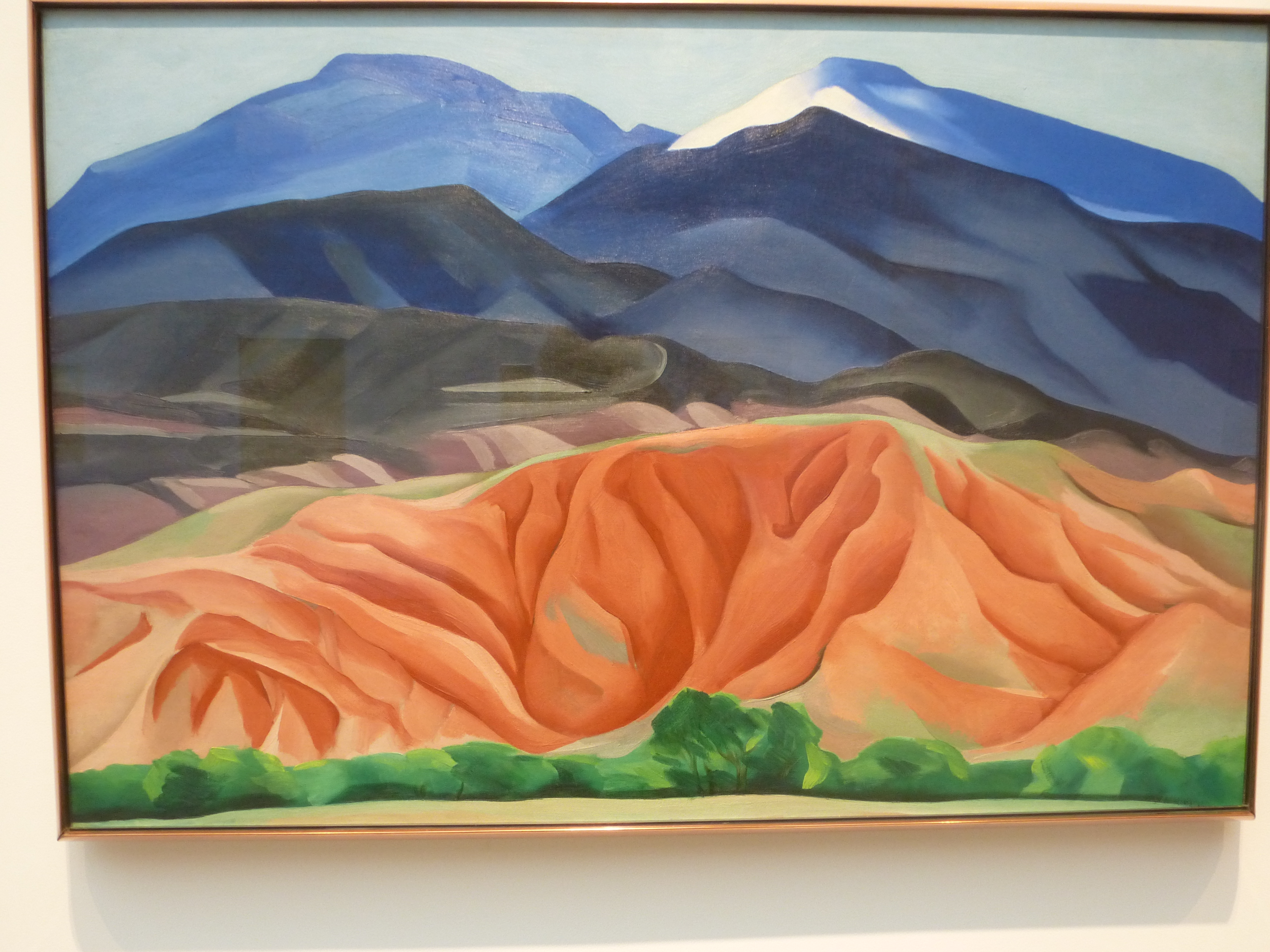 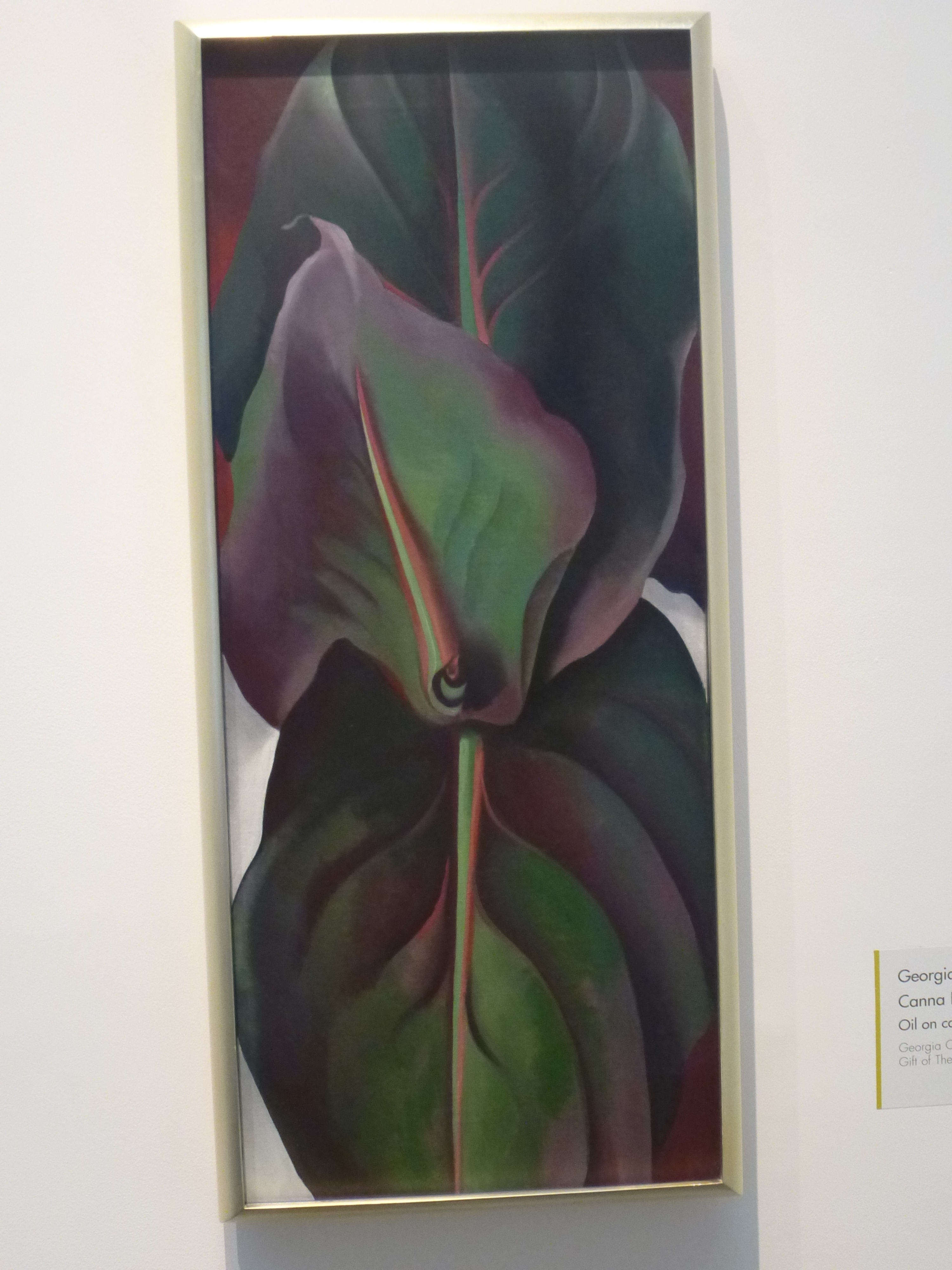 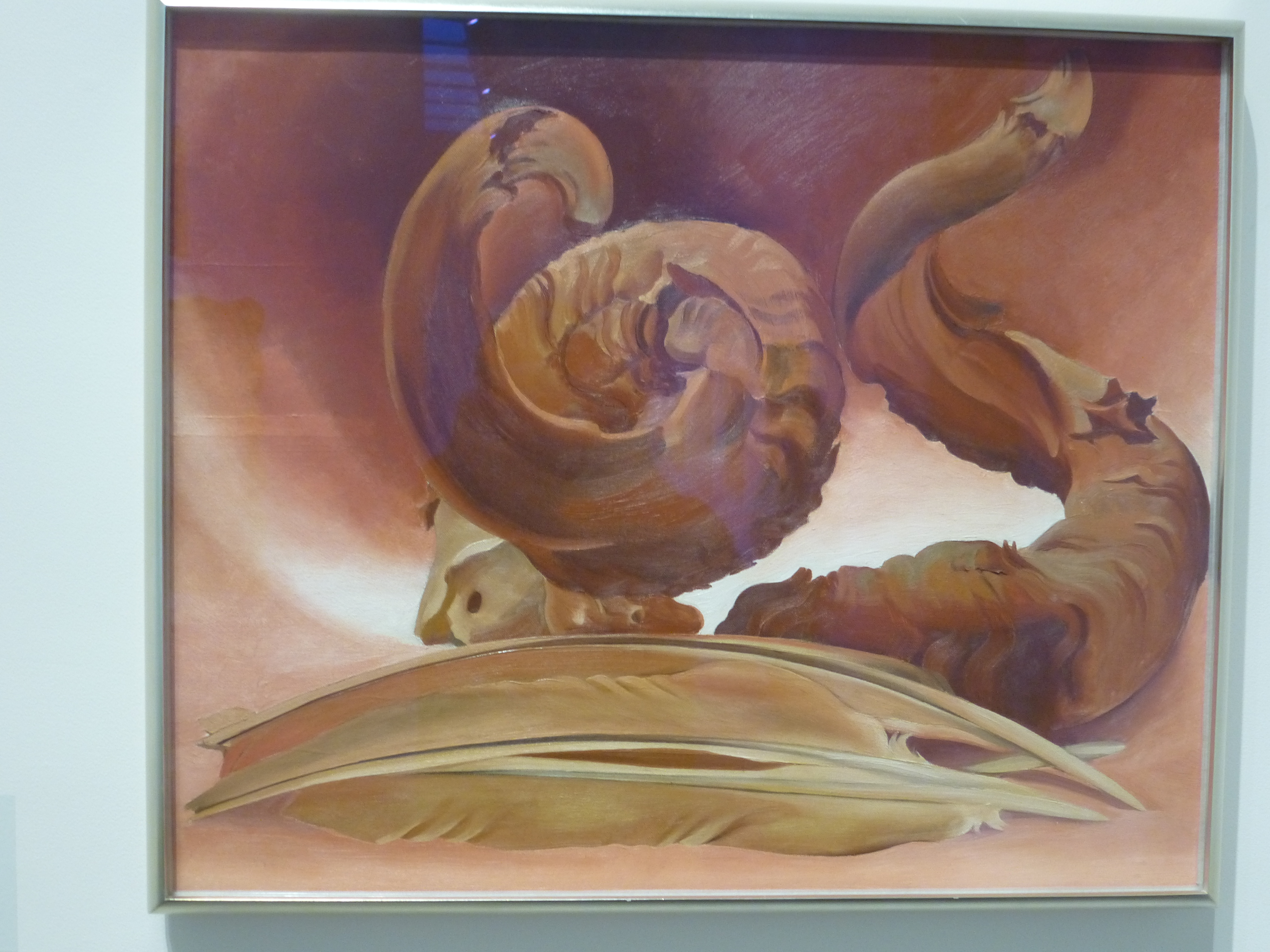 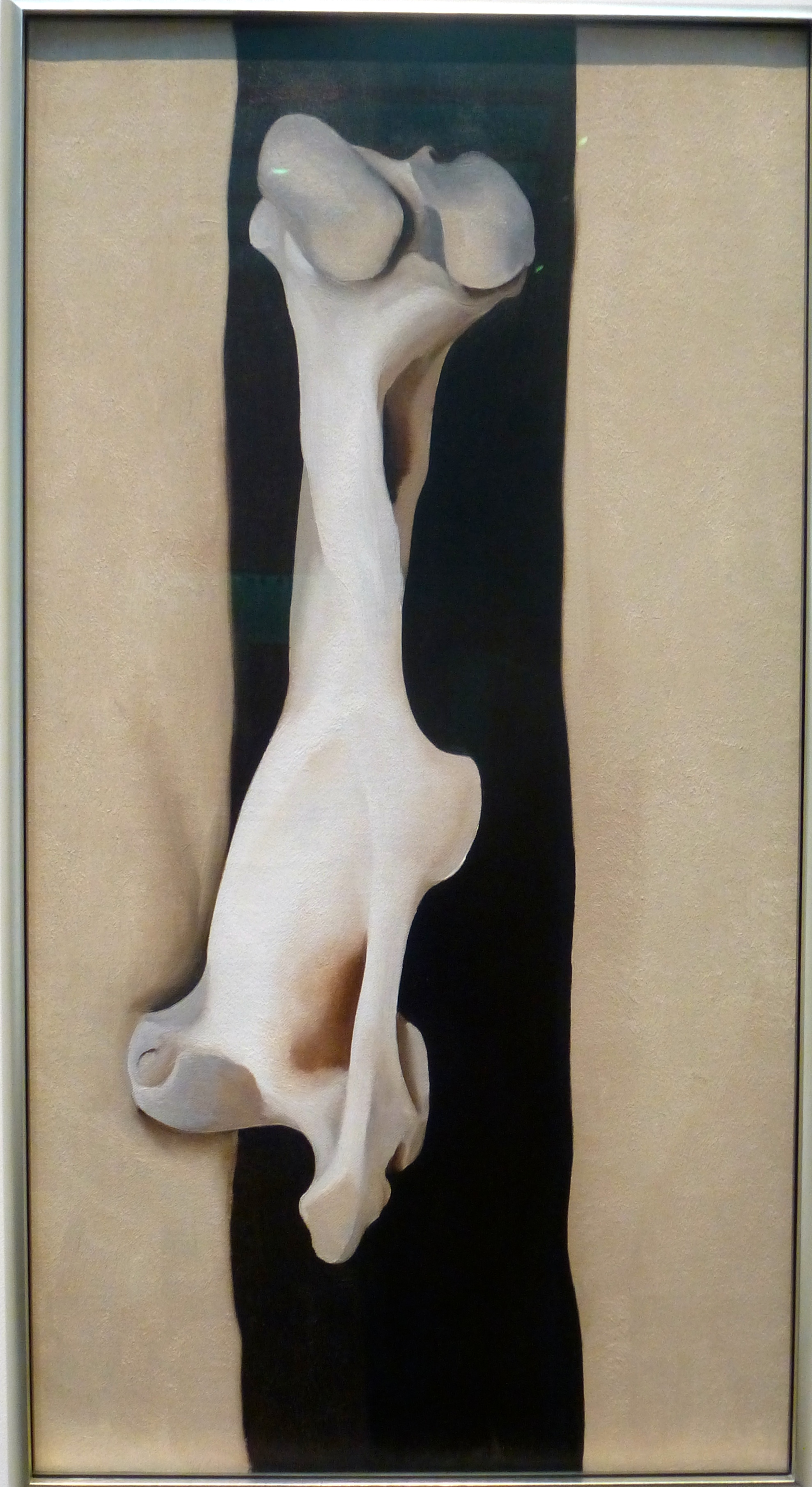 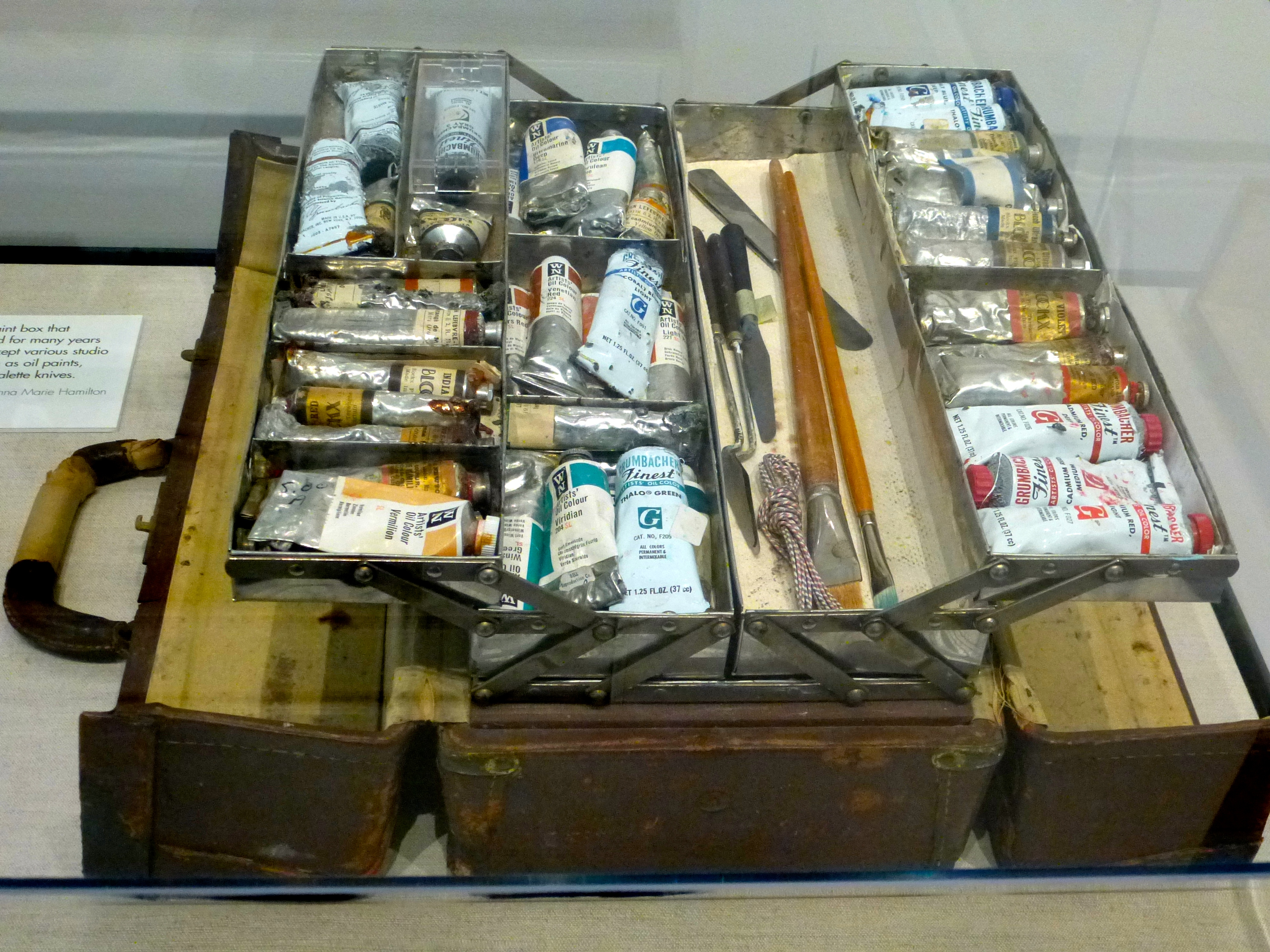 Here’s a photo of O’Keeffe taken by Stieglitz in 1918, when she was about 30. He often concentrated on her hands, which were quite lovely: 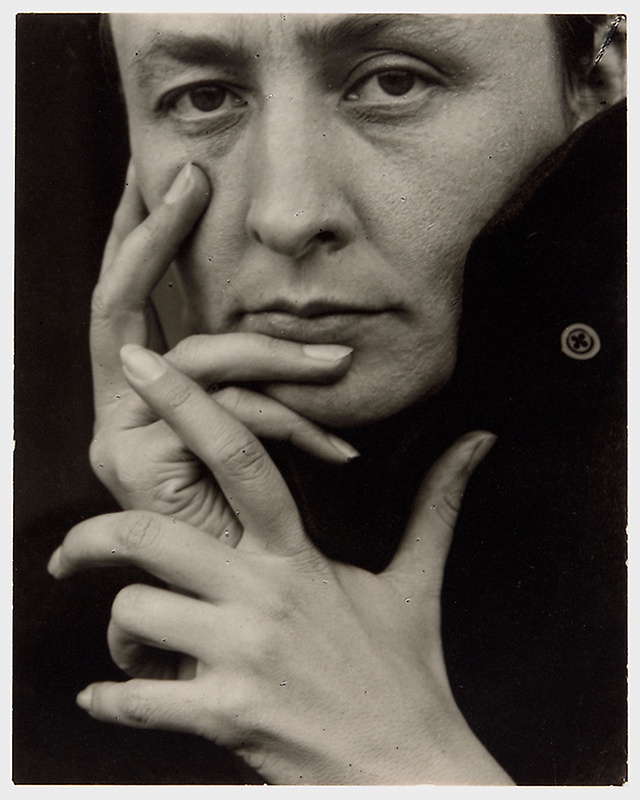 To end this episode, here’s this morning’s breakfast at the famous local joint, the Tecolote Cafe. I had blue-corn batter pancakes filled with toasted pine nuts, topped with ample lashings of butter and syrup. I overordered: one would have been sufficient, but I got the “long stack”: three plate-sized flapjacks. I could eat only half of them.

Here’s the order; I’ve cut into one of the cakes to show the color, but you can see it better in the second photograph. 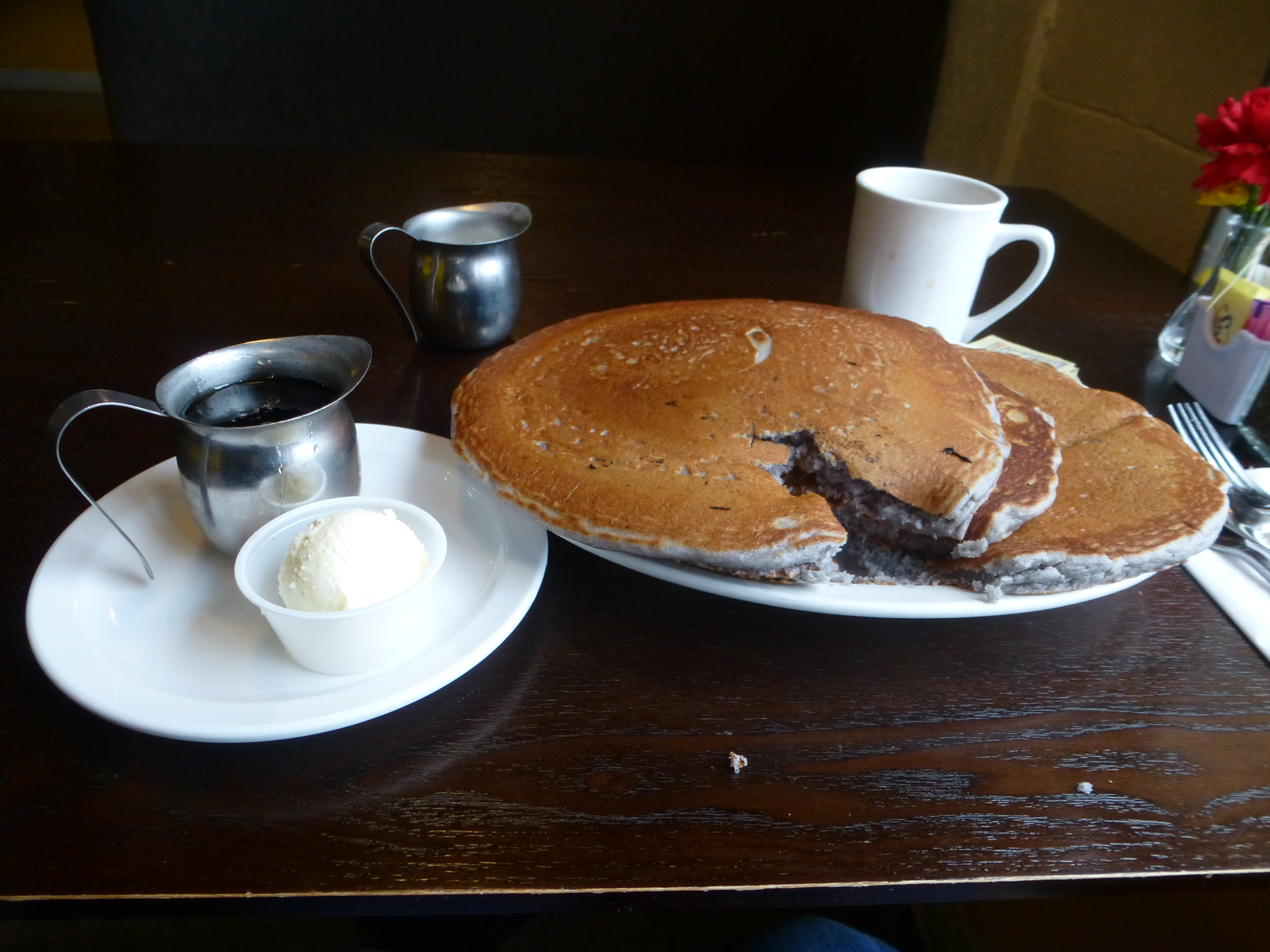 Lovely blue-ish interior filled with pine nuts. I love those nuts, but they’re expensive and virtually impossible to find. 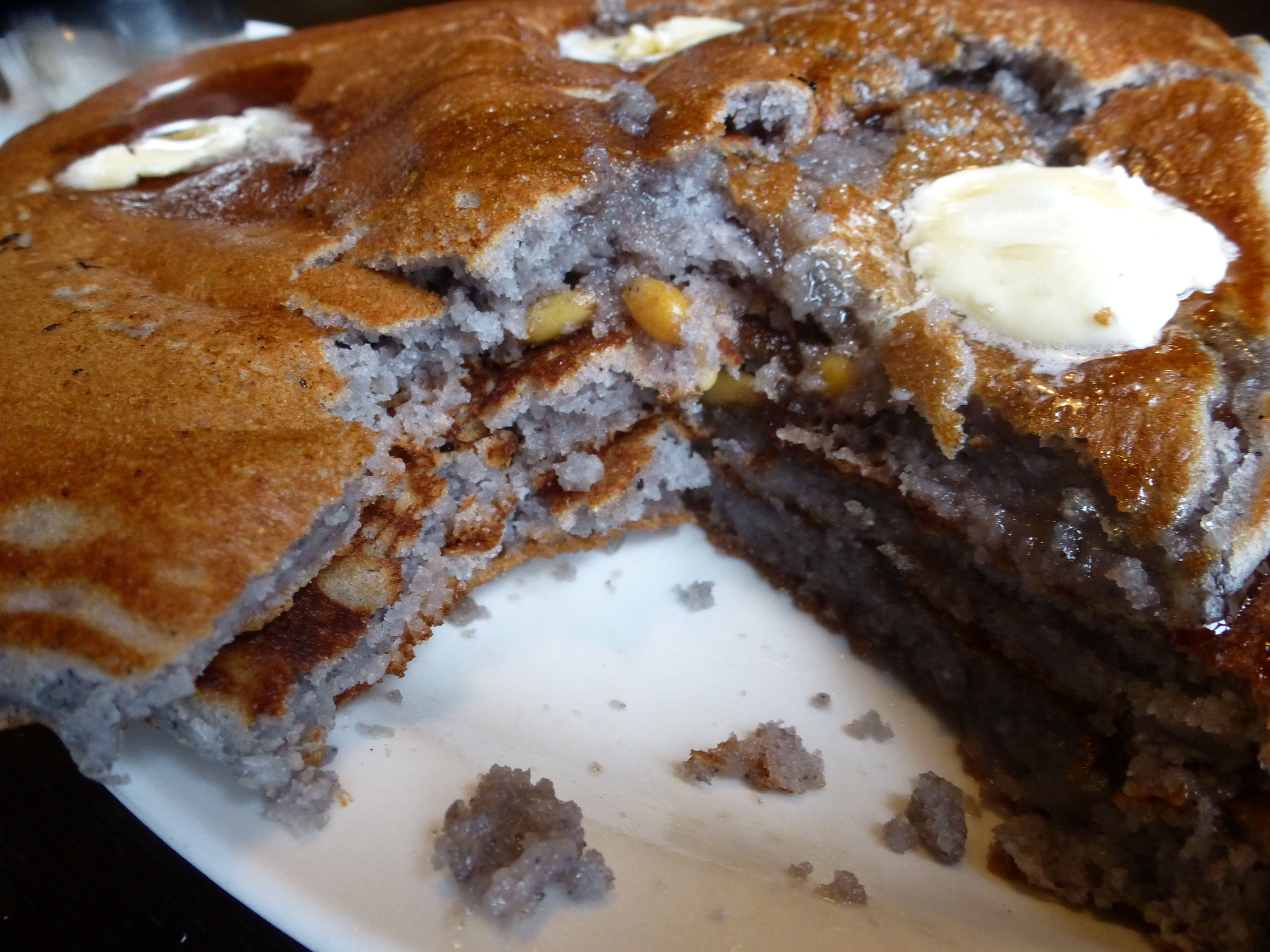 I’ll go back to this place for breakfast tomorrow before I head north to Taos and the surrounding area.