There is seemingly no end to the number of trivial items that Regressive Leftists consider offensive, especially Regressive Leftists in academia, for academics need to somehow have their Offense advance their careers. And so we get academic papers on the patriarchy of glaciology, the racism of white pumpkins and pumpkin lattes, the cultural appropriation and racism of Pilates, the sexism and white privilege of yogurt, and the “othering” and “gender-shaming” of invasive squirrels in California. This stuff is useful for academics because the humanities, at least, are largely left-wing and Regressive to boot. So such papers, which would be laughed at by serious scholars, are gobbled up by journals.

Of course there’s still sexism and racism in American society, but this kind of trivial Pecksniffery endangers the legitimate social enterprise of instantiating equal rights and opportunities for all. But who cares when you have a paper to write and a career to make?

So onto this week’s Ridiculous Offense. This one’s not an academic paper, but an article in Hyperallergenic by an academic, Sarah E. Bond, an assistant professor of Classics at the University of Iowa. I don’t often see classicists turning out this kind of piffle, but I don’t read much in that field.

The title of her piece is “Why we need to start seeing the classical world in color,” and it’s about the Greco-Roman practice of polychromy–of painting their marble statues and buildings, so that what we see today is sometimes now how sculpture looked when it was made.

Bond’s title could be interpreted in two ways. The good way is that we need to realize that the ancients appreciated and saw their architecture and sculpture in color. (We’re only now starting to realize this as we find traces of color using various arcane technical methods.)  The Parthenon, for instance, which all visitors admire as a white marble temple, actually looked like this originally: 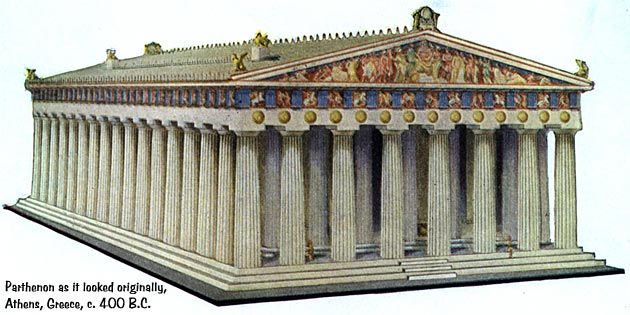 And here’s a Roman relief that still retains some color, reproduced in Bond’s article:

Here’s a color reconstruction of an archer from the West Pediment of the Greek Temple of Aphaia as it looks now, with the color weathered off  the white marble, compared to a reconstruction: 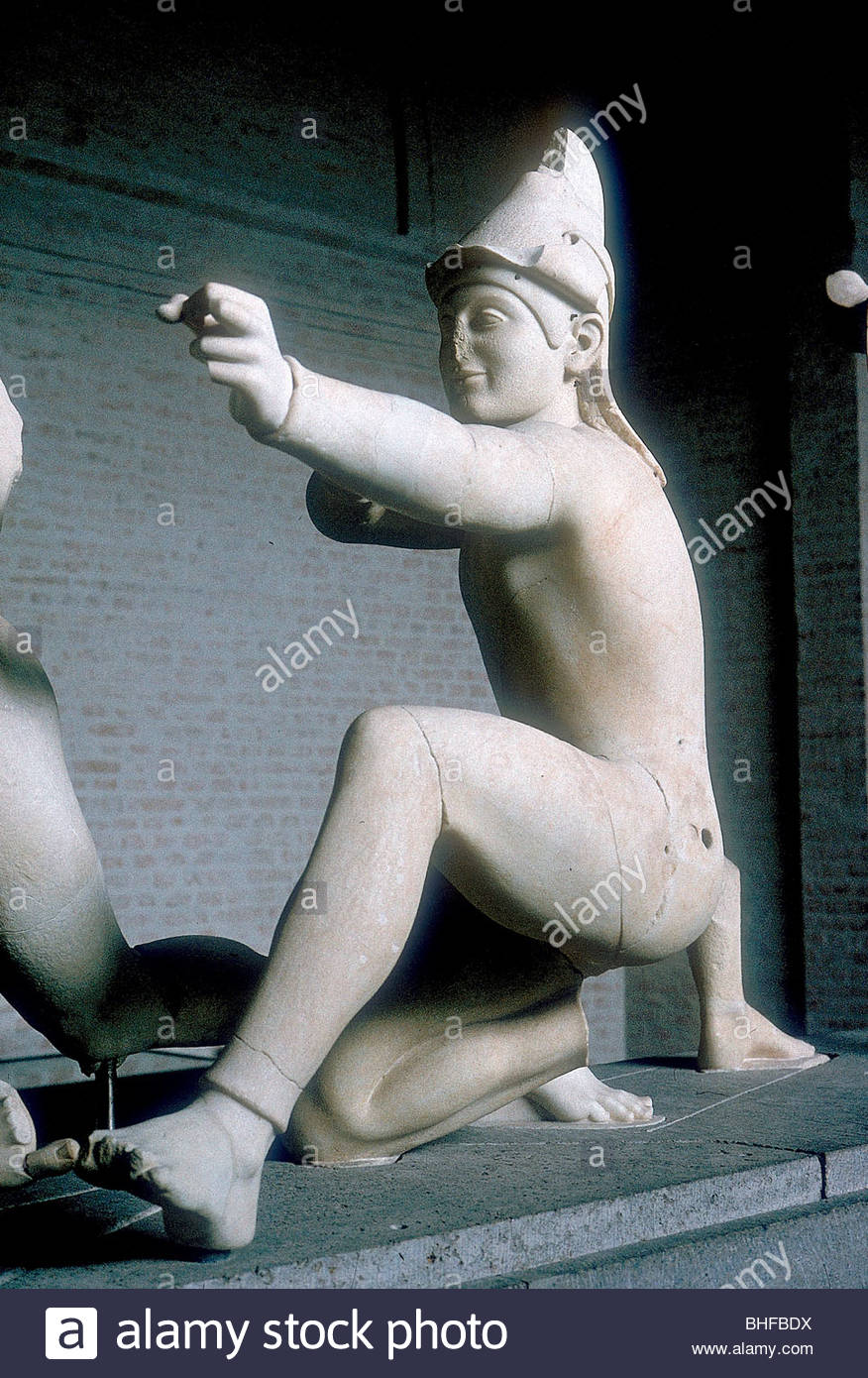 Now I happen to like the colorless, weathered sculpture better, as, I think, do most people.  There’s something about the monochrome of the white marble that makes me appreciate the artistry more, as it does for the sculpture of Michelangelo, Bernini, and other Renaissance and Baroque artists.  The color seems to me both unnecessary and garish, but of course Greek and Roman statues were more than just art in their time: they were objects of veneration, and were meant to tell stories.

Bond’s job, and the second meaning of her title, though, is to tell me that my “aesthetic disgust” at colored ancient sculpture (I’m not disgusted by it, for crying out loud; I just don’t like it!), comes from my white supremacy, and that I’m privileging the white marble because I privilege my white skin.  I am not making this up:

Acceptance of polychromy by the public is another matter. A friend peering up at early-20th-century polychrome terra cottas of mythological figures at thePhiladelphia Museum of Art once remarked to me: “There is no way the Greeks were that gauche.” How did color become gauche? Where does this aesthetic disgust come from? To many, the pristine whiteness of marble statues is the expectation and thus the classical ideal. But the equation of white marble with beauty is not an inherent truth of the universe. Where this standard came from and how it continues to influence white supremacist ideas today are often ignored.

Most museums and art history textbooks contain a predominantly neon white display of skin tone when it comes to classical statues and sarcophagi. This has an impact on the way we view the antique world. The assemblage of neon whiteness serves to create a false idea of homogeneity — everyone was very white! — across the Mediterranean region. The Romans, in fact, did not define people as “white”; where, then, did this notion of race come from?

She then goes into a long disquisition on the racism of scholars beginning in the 18th century, and, although the idea of white superiority was indeed ubiquitous among European academics then, she doesn’t connect it in any meaningful way with our aesthetic preference for white marble. She simply asserts that our aesthetics somehow derive from the racism of people like Joachim Winckelmann, Pieter Camper, and others—including biological white supremacists who measured skulls and brains to arrive at their preconceived notions that whites were superior to all other “races.”

And indeed, she’s correct, but trivially true, when she says this:

Too often today, we fail to acknowledge and confront the incredible amount of racism that has shaped the ideas of scholars we cite in the field of ancient history. For example, I recently, came across Tenney Frank’s disturbing article “Race Mixture in the Roman Empire” while looking through an edited volume. First published in The American Historical Review in July 1916, the article sees Frank attempting to count extant inscriptions (mostly epitaphs) in order to gauge whether “race mixing” contributed to the decline of the Roman empire. It was then reprinted without comment in Greek historian Donald Kagan’s1962 collection of articles on the fall of Rome.

But we all know such things now; evolutionary biologists are especially aware of the racism that permeated evolutionary theory right down through the mid-20th century.  But, adds Bond, this racism still affects people’s attitudes towards art (and the accessibility of art to people of color):

How can we address the problem of the lily white antiquity that persists in the public imagination? What can classicists learn from the debate over whiteness and ancient sculpture?

First, we must consider why we are such a homogenous field. According to the Society for Classical Studies, the leading association for Classics in the United States, in 2014, just 9% of all undergraduate Classics majors were minorities. This number decreases the higher into academia you go. Just 2% of tenured full-time Classics faculty were minorities, according to the study.

Do we make it easy for people of color who want to study the ancient world? Do they see themselves in the ancient landscape that we present to them? The dearth of people of color in modern media depicting the ancient world is a pivotal issue here. Movies and video games, in particular, perpetuate the notion that the classical world was white. This is an issue when 70% of my students tell me that games such as Ryse: Son of Rome (which uses white statues to decorate the city of Rome and white Roman soldiers as lead characters), as well as films like Gladiator (which has a man from New Zealand playing the Spaniard Maximus) and the 300 (which has xenophobic depictions of Persians) led them to take my courses.

As far as I know, apart from African slaves, the classical world was “white” in the sense of comprising Europeans, who had various skin tones depending on their origin. You can see that variety of skin tones in any recent movie about the Greeks or Romans (see “Gladiator” again). Seriously, are Spaniards not considered “white”? If the classical world mostly comprised races usually lumped as Caucasians, what on earth is she talking about?

But of course Bond’s goal is not to enlighten us about art, but to chastise us for racism, and so we “have to change the narrative”:

If we want to see more diversity in Classics, we have to work harder as public historians to change the narrative — by talking to filmmakers, writing mainstream articles, annotating our academic writing and making it open access, and doing more outreach that emphasizes the vast palette of skin tones in the ancient Mediterranean.

I’m still puzzled about how apprehending the “vast palette of skin tones” among mostly Caucasian people is somehow going to get rid of racism. After all, are dark-skinned Spaniards, Greeks, and southern Italians the object of racism? Not to the scholars that Bond cites, who were all concerned with whites versus blacks. Seeing painted Roman and Greek sculpture won’t dispel that kind of racism.

But what Bond fails to consider is that aesthetic preference for non-painted sculptures—and they’re not just white—may be innate or even derived from cultural norms that have nothing to do with racism. Did Renaissance architects and sculptors use white marble because they were racists? If so, was Shah Jahan, a Mughal, a racist because he built the Taj Mahal in white marble? If so, why did the Mughals also build many forts and palaces in red? Why do we admire the Red Fort, the Red City of Petra, or the originally non-polychromed Sphinx of Giza? Many South Indian temples and sculptures are black, and are much admired by art lovers. When some South Indian Temples are painted, many of us see thm as garish and not as appealing. Here it’s not the white we admire, but the purity of any uniform color, which doesn’t distract us from the artistry of the sculptors. After all, that’s why we appreciate classical bronze sculpture, which is definitely not white. Finally, I have a suspicion that white marble was used because it’s plentiful and easy to work, not because sculptors were looking for any rock.

I suggest, then, that Bond has rejected alternative and better supported hypotheses for our aesthetics in favor of her own Regressive-Left confirmation bias, which is to see racism behind art appreciation. But she has not convinced me that I’m a racist because I prefer my Elgin Marbles sans pigment.

116 thoughts on “Does admiration for white marble antiquities derive from racism?”