Certain forms of postmodern discourse are so outré that you can’t tell whether they’re serious or jokes. (Indeed, some postmodernists claim that their serious pieces can be construed as jocular!) The most famous example of this conflation between the scholarly and the absurd is, of course, Alan Sokal’s hoax article on physics and postmodernism for the journal Social Text, “Transgressing the Boundaries: Towards a Transformative Hermeneutics of Quantum Gravity“. (I’m proud to say that the first letter in the New York Times about that piece was my own praise for Sokal. I was then roundly attacked on the phone by an old friend who had, without my knowledge, gone over to the Dark Side and become a postmodernist.)

So here’s an article that just appeared in the journal Progress in Human Geography (pdf here, h/t to reader David). Click on the screenshot to go to the whole thing. The journal is real, and the authors seem real too. In fact, first author Mark Carey is a Professor of History and Associate Dean at Clark Honors college of the University of Oregon. He’s published lots of stuff on glaciers.  Here is his latest paper with three coauthors. Your job is to at least skim it and judge whether it’s a genuine scholarly paper or a Sokalian hoax. I’m betting on the former. 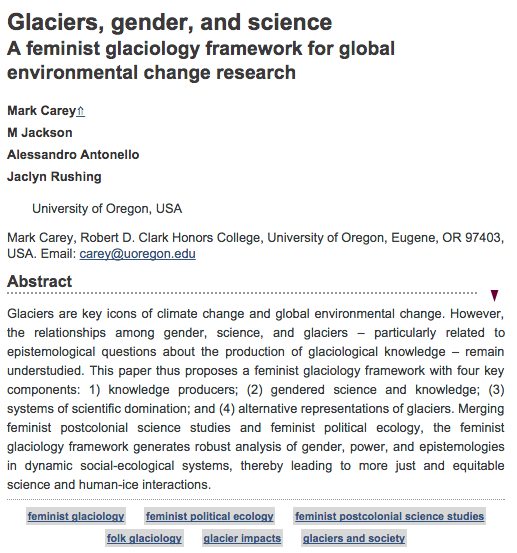 Here are two excerpts from the abysmally written paper:

A critical but overlooked aspect of the human dimensions of glaciers and global change research is the relationship between gender and glaciers. While there has been relatively little research on gender and global environmental change in general (Moosa and Tuana, 2014; Arora-Jonsson, 2011), there is even less from a feminist perspective that focuses on gender (understood here not as a male/female binary, but as a range of personal and social possibilities) and also on power, justice, inequality, and knowledge production in the context of ice, glacier change, and glaciology (exceptions are Bloom et al., 2008; Williams and Golovnev, 2015; Hevly, 1996; Hulbe et al., 2010; Cruikshank, 2005). Feminist theories and critical epistemologies – especially feminist political ecology and feminist postcolonial science studies – open up new perspectives and analyses of the history of glaciological knowledge. Researchers in feminist political ecology and feminist geography (e.g. Sultana, 2014; Mollett and Faria, 2013; Elmhirst, 2011; Coddington, 2015) have also called for studies to move ‘beyond gender’, to include analyses of power, justice, and knowledge production as well as ‘to unsettle and challenge dominant assumptions’ that are often embedded in Eurocentric knowledges (Harris, 2015: xx). Given the prominent place of glaciers both within the social imaginary of climate change and in global environmental change research, a feminist approach has important present-day relevance for understanding the dynamic relationship between people and ice – what Nüsser and Baghel (2015) refer to as the cryoscape.

Through a review and synthesis of a multi-disciplinary and wide-ranging literature on human-ice relations, this paper proposes a feminist glaciology framework to analyze human-glacier dynamics, glacier narratives and discourse, and claims to credibility and authority of glaciological knowledge through the lens of feminist studies.

How many buzzwords can you find in the above? Doesn’t it make you want to bang your skull against the desk? I won’t torture you much longer, but here’s one more bit:

Feminist glaciology asks how knowledge related to glaciers is produced, circulated, and gains credibility and authority across time and space. It simultaneously brings to the forefront glacier knowledge that has been marginalized or deemed ‘outside’ of traditional glaciology. It asks how glaciers came to be meaningful and significant (through what ontological and epistemological process), as well as trying to destabilize underlying assumptions about ice and environment through the dismantling of a host of boundaries and binaries. The feminist lens is crucial given the historical marginalization of women, the importance of gender in glacier-related knowledges, and the ways in which systems of colonialism, imperialism, and patriarchy co-constituted gendered science. Additionally, the feminist perspective seeks to uncover and embrace marginalized knowledges and alternative narratives, which are increasingly needed for effective global environmental change research, including glaciology (Castree et al., 2014; Hulme, 2011). A combination of feminist postcolonial science studies and feminist political ecology provide the intellectual foundation for feminist glaciology.

Oh, and I couldn’t resist this, near the end:

Second, we reiterate the need not only to appreciate the differential impacts of environmental change on different groups of people – men and women, rich and poor, North and South – but to understand how the science that guides attempted solutions may in fact perpetuate differences because they are, essentially, built on and draw their epistemic power from differentiation and marginalization. Struggles over authority and legitimacy play out in many obvious ways in climate change negotiations. Struggles also happen in less obvious ways, such as in the environmental change research underpinning climate politics. Analysts and practitioners must recognize the ways in which more-than-scientific, non-Western, non-masculinist modes of knowledge, thinking, and action are marginalized. The response to simplistic ‘ice is just ice’ discourse is not merely to foreground or single out women and their experiences – that would simply perpetuate binaries and boundaries and ignore deeper foundations.

Okay, weigh in below: real or hoax?

By the way, this was funded in part by the U.S. taxpayers:

How much did the first author get from the NSF? A reader found the official grant award notice, and the amount is $ 412,930.  It was an NSF CAREER award approved by the Division of Social and Economic Sciences, and the title was “Glaciers and Glaciology: How Nature, Field Research, and Societal Forces Shape the Earth Sciences.”

Where is William Proxmire when we need him?

116 thoughts on “A real paper or a Sokal-esque hoax? You be the judge”