Last March I wrote about a dreadful paper on feminist glaciology, whose intent was to bring a feminist viewpoint to the study of glaciers. It failed to do that, but succeeded in signaling the virtue of the authors, all from the University of Oregon. Moreover, the authors’ work was supported by the National Science Foundation—yes, American tax dollars at work—although I doubt the authors proposed this “research” in their grant.  Later on, Mark Carey, one of the authors and a dean at his University, defended the paper, arguing that the pushback against the paper, and there was a lot, was evidence of its value! Of course the paper sank into the stratum of worthless research, having made no contribution to human understanding of anything.

At first I thought the glacier paper was a Sokal-like hoax, but it wasn’t. And neither is this 2014 paper by Sarah W. Holmes in Dance Research Journal (reference and free download below): “The Pilates pelvis: Racial implications of the immobile hips.” Although it doesn’t appear to contain an abstract, there is one published at 3rd Solution, apparently by the author. Here it is:

This article examines the treatment of the pelvis in the Pilates exercises “Single Leg Stretch” and “Leg Circles.” The teaching practices of the hips, as commonly explained in Pilates educational manuals, reinforce behaviors of a noble-class and racially “white” aesthetic. Central to this article is the troubling notion of white racial superiority and, specifically, the colonizing, prejudicial, and denigrating mentality found in the superiority of whiteness and its embodied behaviors. Using the two Pilates exercises, I illuminate how perceived kinesthetic understandings of race in the body may be normalized and privileged. By examining the intersections between dance and Pilates history, this article reveals the ways embodied discourses in Pilates are “white” in nature, and situates Pilates as a product of historically constructed social behaviors of dominant Anglo-European culture.

The author proceeds to demonstrate that Pilates is “the embodiment of whiteness,” using just the two Pilates exercises named in the abstract. These exercises, she claims, “purposely train the body to stabilize the pelvis”, which she considers racist. I have no idea whether other Pilates exercises share the features of these two (immobilzation of the butt, hips, and pelvis, which, to Holmes, instantiates a denigration of black culture), so if you’ve done Pilates, weigh in below.

I am not making this stuff up, and will give an ample selection of quotes to prove it. Remember, the author got a Ph.D. from the University of California at Riverside for this. (That, of course, is also the academic home of Resa Aslan.) To wit:

The stillness of the pelvis, and the racial implications surrounding its lack of movement, are just as important in understanding the embodiment of racial stereotypes. I therefore illustrate how Pilates deliberately trains the pelvis into stillness by examining the movements, teaching practice, and rhetoric surrounding the pelvis in two exercises: “Single-Leg Stretch” and “Leg Circles with Loops” (Leg Circles). These exercises train the body in a deliberate and specific way, and teach the pelvis to conceal, restrict, and control movements that perpetuate behaviors normalized as “white.”

. . . I argue that Pilates works to distance the behaviors of the “white body” from racially marginalized bodies. Through the act of restricting the movement of the hips, Pilates racially marks the body as white and creates, through the universalized and normalized aspect of it, an invisible racialized kinesthetic knowledge, or in this case, the performance of the superiority of whiteness.

We’ve read about how cornrows are cultural appropriation, and that General Tso’s chicken, when cooked wrongly (even though it’s not a Chinese dish) marginalizes Asians, but this may be the most ludicrous claim of all. It’s as if Holmes were desperately trawling the dance literature, searching for something she could consider racist and then turn into a Ph.D.

As I will demonstrate, the movements of the hips/butt/pelvis have been traditionally and problematically stereotyped as racialized behaviors of the “Other.” I propose the un-accentuated pelvis, commonly associated with “white,” or Anglo-American or Anglo-European aesthetics, marks Pilates in a racially specific way.

. . . The embodiment of whiteness has represented both perceived and realized moral and social capital and power (Dyer 1997; Wheeler 2000). Ruth Frankenberg states, “Whiteness refers to a set of loca- tions that are historically, socially, politically, and culturally produced and, moreover, are intrinsic- ally linked to unfolding relations of domination” (1993). I suggest, quite literally, the location of domination is kinesthetically represented in the movement of the pelvis. The embodiment of white- ness and its social privilege and power are inextricably linked. Whiteness, and the power that has come to be associated with it, is rooted in colonization, religion, and the body (Dyer 1997; Gottschild 1998).

And in fact the author demonstrates this oppression in photographs. Look at that privilege! I can’t even. . .

Note that Dr. Holmes is white, which means this paper is an exercise in virtue signaling. Here’s another example of her actually participating in that bigoted immobilization: 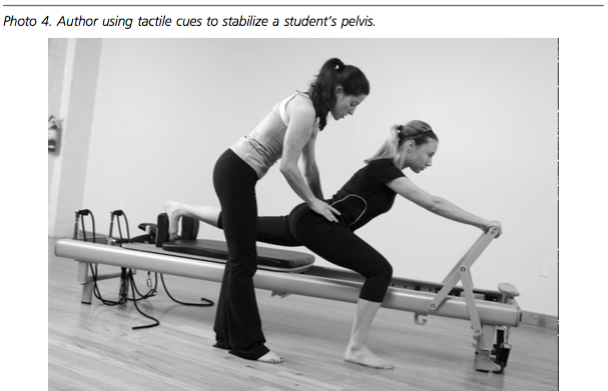 Of course if Holmes wants to maintain that the immobility of the hip area is white, she has to show that the movement of those areas is somehow characteristic of black culture. So she says this:

If pelvic movement, and its description, are lacking or absent from Europeanist aesthetics, then what does its movement infer? Racial and ethnic studies scholars have recovered negative racial stereotypes surrounding the movement of the African and Latino hips. As Gottschild states, the pelvis acts as a site where the “dominant culture projects its collective fantasies” (1998, 9). The Europeanist categorization of the Africanist dancing body’s movement is “vulgar, comic, uncontrolled, undisciplined, and most of all, promiscuous” (Gottschild 1998, 9). The Europeanist aesthetic denigrates movements of the hips, which implies that the converse, stable or stationary hips, is preferable.

Perhaps there’s a wee grain of truth here, but only if it’s the case that African and Latino dancing exaggerates hip movement more than do dances of other cultures.  But even if that’s the case, it doesn’t show that such movements are denigrated by European culture (viz., Shakira’s “Hips don’t lie“, which was wildly popular in the U.S.), nor that Pilates is somehow racist. And she fails to consider tap dancing, largely an innovation of black dancers, which pretty much immobilizes much of the body above the legs.

You can read this piffle for yourself, but let me add one paragraph in which Holmes admits that the Pilates manuals don’t really tell you to keep that pelvis immobile, but it’s implied:

Neither Peak Pilates nor Polestar Pilates gives specific instructions on the actual physical placement of the pelvis in this exercise in their descriptions. From my training experience, the implied position of the pelvis is generally thought to be in either a “neutral pelvis” or a posterior pelvic tilt, meaning that, lying supine, the pelvis tips towards the person’s navel. This action works to elongate the lumbar curve, and is accomplished by “scooping” or “drawing in” the abdominals. Polestar Pilates states that the body should be in the supine position in this exercise, but does not indicate the position of the pelvis (2002d). Similarly, with the exception of “sacrum on the mat,” Peak Pilates recommends to “lie on your back . . . and keep your lower back on the Mat” (2009). While description of the pelvis is absent from these scenarios (although it is inferred [sic]), both manuals maintain that control and stability of the pelvis is important to perform it “correctly.” If the embodiment of whiteness, and rhetoric surrounding the behavior of whiteness, denies or negates movement of the pelvis, and instead accentuates the verticality of the spine, then the Pilates exercise of “Single Leg Stretch” fosters this behavior. Further, this exercise promotes a racialized configuration of the body through its aesthetic values, anatomical principles, and pedagogical practice. Yet, all the while, it invisibilizes its preference toward whiteness by never mentioning race and privileging scientific discourse.

This is what we experts call a “stretch”: a cooked-up claim that demonstrates confirmation bias. I could give you more quotes but don’t want to ruin your morning. Just let it be known that this kind of “cry wolf” exercise, looking everywhere for signs of racism, dilutes the valid claims of oppression made by others.

And, to get the bad taste out of your brain, enjoy this video by Shakira and Wyclef Jean:

187 thoughts on “A postmodern academic signals her virtue: Why Pilates is white and racist”