I’m a a big admirer of philosopher Peter Singer, for he deals with philosophical problems affecting the real world, not with arcane stuff like compatibilism; and he really lives his philosophy, donating a substantial portion of his income to charity, not eating meat, and not wearing leather. His work on practical ethics, altruism, and animal rights has been immensely influential. And he’s just a nice guy, as I discovered from a brief correspondence with him.

But some people don’t think so because of Singer’s views on “euthanasia” of newborns, which is that it might be moral behavior to euthanize some hopelessly ill or deformed babies even after they were born—but soon after birth. This has led, as I have noted, to his de-platforming in several places, and even calls for his resignation from Princeton (see also here and here),  The protestors, who accuse Singer of “ableism” and calling for the killing of the disabled, almost always misunderstand or distort his position. Here are two interviews in which he’s clarified his position (see first and second links above):

Q. You have been quoted as saying: “Killing a defective infant is not morally equivalent to killing a person. Sometimes it is not wrong at all.” Is that quote accurate?

A. It is accurate, but can be misleading if read without an understanding of what I mean by the term “person” (which is discussed in Practical Ethics, from which that quotation is taken). I use the term “person” to refer to a being who is capable of anticipating the future, of having wants and desires for the future.  As I have said in answer to the previous question, I think that it is generally a greater wrong to kill such a being than it is to kill a being that has no sense of existing over time. Newborn human babies have no sense of their own existence over time. So killing a newborn baby is never equivalent to killing a person, that is, a being who wants to go on living.  That doesn’t mean that it is not almost always a terrible thing to do.  It is, but that is because most infants are loved and cherished by their parents, and to kill an infant is usually to do a great wrong to its parents.

Sometimes, perhaps because the baby has a serious disability, parents think it better that their newborn infant should die. Many doctors will accept their wishes, to the extent of not giving the baby life-supporting medical treatment.  That will often ensure that the baby dies.  My view is different from this, only to the extent that if a decision is taken, by the parents and doctors, that it is better that a baby should die, I believe it should be possible to carry out that decision, not only by withholding or withdrawing life-support – which can lead to the baby dying slowly from dehydration or from an infection – but also by taking active steps to end the baby’s life swiftly and humanely.

Q. What about a normal baby? Doesn’t your theory of personhood imply that parents can kill a healthy, normal baby that they do not want, because it has no sense of the future?

A. Most parents, fortunately, love their children and would be horrified by the idea of killing it.  And that’s a good thing, of course.  We want to encourage parents to care for their children, and help them to do so. Moreover, although a normal newborn baby has no sense of the future, and therefore is not a person, that does not mean that it is all right to kill such a baby.  It only means that the wrong done to the infant is not as great as the wrong that would be done to a person who was killed. But in our society there are many couples who would be very happy to love and care for that child.  Hence even if the parents do not want their own child, it would be wrong to kill it.

or this (NZZ is the Neue Zürcher Zeitung):

NZZ: Next week, you are due to receive an award for the reduction of animal suffering. This has provoked protests because you, allegedly, want to have disabled children killed. Is that true?

PS: There are circumstances where I would consider that to be justified, yes. For instance, when an extremely premature baby suffers from a cerebral hemorrhage so massive that it will never recognize its mother and smile at her. If such a child requires artificial respiration, almost all doctors would advise to switch the device off and let the child die. The artificial respiration is terminated because they do not want the baby to live. But if the child is already capable of breathing on its own, killing it requires a lethal injection. Why should it be morally relevant whether I switch off a device or give the child an injection? In both cases, I decide over the child’s life. [JAC: People often make a distinction here between a direct action that terminates life and an indirect action that allows life to end, but I consider that a distinction without a difference.]

NZZ: Would you also kill a new-born child with a mild disability?

PS: If the disability is compatible with a good quality of life, it should be possible to find a couple willing to adopt the child if the parents do not want it. Why should it be killed then?

In fact I agree with Singer here for cases in which a child is so horribly deformed or diseased that it will either die very soon or will be an intolerable burden on its parents—as with a baby in a vegetative state, or incurably demented. But people with, say, cerebral palsy or other handicaps, who can live decent lives and enjoy those lives, think—or deliberately misrepresent—that Singer is calling for the euthanasia of people like them.

He’s not. All you have to do is read what he’s written or said. It’s one of those moral positions that at first sounds repugnant but actually makes considerable sense. You can argue about it, of course, but what you shouldn’t do is demonize Singer for a well thought out view—or no-platform or censor him.

But that is exactly what happened to Singer on March 1 at an “Effective Altruism” Club at the University of Victoria in British Columbia, where a presentation of his TED talk was scheduled, followed by Singer answering questions via Skype. The topic wasn’t euthanasia, but effective altruism: how to do the best for humanity you can with your limited resources.

As martlet reports, a group of students interrupted the presentation, standing in front of the stage, making noise, and accusing Singer of ableism. Ultimately, it sounds as if the talk was simply inaudible. As martlet noted:

Prior to the event, a candlelight vigil was set up in the main SUB hallway in honour of the the Disability Community Day of Mourning, which was coincidentally on the same day. A chalkboard with the names of disabled victims of filicide — murder by one’s caregiver or family member — stood on display for passersby to see.

As people slowly entered the auditorium, a small group of students stood on stage with a microphone and read out a list of names of disabled people killed throughout 2016 and 2017.

“People who were their caregivers, who were meant to provide stability and care and love, decided these people weren’t worthy of life,” said Tareem Sangha, one of the students on stage.

Effective Altruism attempted to begin the TED Talk at 3:30 p.m., but were temporarily deterred by the resounding vocal response from the protesters. After a few minutes, they proceeded anyway, with the video’s captions on and sound amplified to compensate.

. . . What began as two conflicting defenses of free speech soon hindered discussion of any kind, as the Effective Altruists and protesters battled with the volume to deafening proportions. Protesters used a megaphone to read prepared text to the audience, and numerous audience members shouted back at them to leave.

One protester even temporarily unplugged the adapter connecting Effective Altruism’s computer to the projector before fleeing out the side door of Cinecenta. The club was able to quickly start the video back up with a replacement adapter.

All the while, Singer’s TED Talk and Q&A continued, and the room grew cacophonous. Shouts of support for Singer’s free speech were met with chants of “eugenics is hate” and “disabled lives matter,” and neither side showed any signs of backing down.

“It’s a trainwreck,” said one student in the audience. “I wanna leave, but if I leave now, [the protesters] get their way.”

. . .Despite the stated focus on the effective altruism movement, Singer was in fact asked to address his views on euthanasia, but his answer was inaudible over the din of the auditorium. Though the club did record a portion of the event, the recording of Singer’s answer has not been made publicly available as of yet.

You can see a video of the disruption by clicking on the screenshot below. What you’ll see is a bunch of entitled whiners trying to censor Singer’s speech. It’s reprehensible: 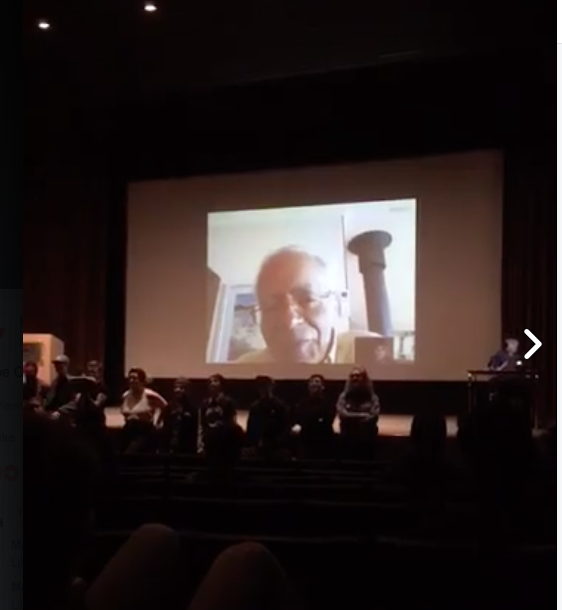 There was also a change.org petition calling for the de-platforming of Singer because he was advocating “the killing of people with disabilities.” That is a disingenuous summary of his views. (The petition got only 89 signers.)

Will the University of Victoria do anything about this, like disciplining the protestors, or even issuing a statement in favor of free speech? I haven’t found such a statement.

I am sick to death of students trying to censor those whose views offend them, and in this case Singer’s views should most certainly be heard. There was a time when such protests would arise over assisted suicide, an act now legal in several U.S. states and other countries. Society has progressed. We need to consider whether infants of the kind Singer discusses might also constitute an intolerable and unnecessary burden on society, so that they should be allowed to die. It’s surely worth discussing.