Two days ago I posted a piece about how Princeton philosopher Peter Singer was disinvited from a philosophy conference in Germany because of his views on euthanasia of newborn infants having horrible diseases or deformities (he’s long been in favor of that form of mercy killing). His disinvitation was prompted by a recent interview in a Zürich newspaper that dealt with these views.

Singer’s position on the assisted dying of both infants and adults who are ill appears on his FAQ page; here’s the bit on infants, which is far more nuanced than many of his critics claim:

Q. You have been quoted as saying: “Killing a defective infant is not morally equivalent to killing a person. Sometimes it is not wrong at all.” Is that quote accurate?

A. It is accurate, but can be misleading if read without an understanding of what I mean by the term “person” (which is discussed in Practical Ethics, from which that quotation is taken). I use the term “person” to refer to a being who is capable of anticipating the future, of having wants and desires for the future.  As I have said in answer to the previous question, I think that it is generally a greater wrong to kill such a being than it is to kill a being that has no sense of existing over time. Newborn human babies have no sense of their own existence over time. So killing a newborn baby is never equivalent to killing a person, that is, a being who wants to go on living.  That doesn’t mean that it is not almost always a terrible thing to do.  It is, but that is because most infants are loved and cherished by their parents, and to kill an infant is usually to do a great wrong to its parents.
Sometimes, perhaps because the baby has a serious disability, parents think it better that their newborn infant should die. Many doctors will accept their wishes, to the extent of not giving the baby life-supporting medical treatment.  That will often ensure that the baby dies.  My view is different from this, only to the extent that if a decision is taken, by the parents and doctors, that it is better that a baby should die, I believe it should be possible to carry out that decision, not only by withholding or withdrawing life-support – which can lead to the baby dying slowly from dehydration or from an infection – but also by taking active steps to end the baby’s life swiftly and humanely.

Q. What about a normal baby? Doesn’t your theory of personhood imply that parents can kill a healthy, normal baby that they do not want, because it has no sense of the future?

A. Most parents, fortunately, love their children and would be horrified by the idea of killing it.  And that’s a good thing, of course.  We want to encourage parents to care for their children, and help them to do so. Moreover, although a normal newborn baby has no sense of the future, and therefore is not a person, that does not mean that it is all right to kill such a baby.  It only means that the wrong done to the infant is not as great as the wrong that would be done to a person who was killed. But in our society there are many couples who would be very happy to love and care for that child.  Hence even if the parents do not want their own child, it would be wrong to kill it.

These views, which seem reasonable—or at least justifiable—have been known for a long time, so it seems unfair to disinvite Singer for re-expressing what he’s long avowed. But of course Germans are extraordinarily sensitive about euthanasia given its widespread and vicious employment by the Nazis.

But according to the Washington Times, disability activists have begun gathering signatures on a petition at change.org asking that Singer leave his faculty job:

Their petition, which has over 800 signatures, demands that Mr. Singer resign and asks that Princeton officials disavow his comments. It also demands that Gov. Chris Christie “publicly denounce the lethal and discriminatory public health care policy advocated by Princeton bioethicist Peter Singer.”

“Rather than challenging Singer’s advocacy as a form of hate speech,Princeton University has provided Singer with a prominent platform and increased access to US media and policymakers for 16 years, establishing itself as the home for the worst of overt — and deadly — bigotry against disabled people of all ages,” the petition states.

Note that here Singer’s views, which at the very least should provoke debate, and have, in my view, considerable justification, are characterized as “hate speech.” Such is the way campus activists try to ruin the careers of those who merely raise provocative questions. And, in truth, Singer’s proposals have very little chance of being adopted, at least in the U.S.

The petition is one product of demonstrations at Princeton in which a group of activists, many of them with disabilities, blocked Nassau Street in early June, calling for Singer’s resignation. (There have been such periodic protests since Princeton hired Singer in 1999.) Planet Princeton reports:

At one point, the protesters marched in a circle on Nassau Street and called for Singer’s resignation, shouting “Hey hey, ho ho, Singer’s got to go.”

. . . “I don’t want to call him a  professor. I don’t think he can be a professor,” said one rally participant. “He’s talking about euthanization.”

Here’s one photo of the demonstration from Planet Princeton: 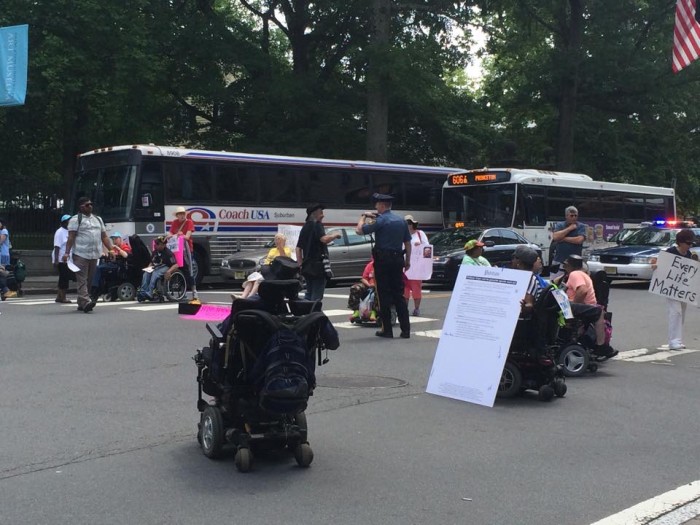 I can understand the anger of some of these people, though I’m not sure that any of them have medical conditions that, under Singer’s view, would have been cause for euthanasia in infancy. If they did, I can also sympathize with their feelings, which must be something like, “Hey, I’m here and I am okay with my life. But if Singer had his way, I wouldn’t be here now.”

Yet that is surely the case for every fetus that is aborted, most of them being infants without any medical condition. Surely nearly all of them, if allowed to become adults, would decry the desires to abort them. But does it really make a substantive difference whether that “abortion” occurs before or immediately after birth, and, if the latter, is practiced only on the kind of sick children to which Singer refers? Further, one has to balance the view of those who are disabled, but have become old enough to become self-aware, against the well being of their parents, and against, as Singer emphasizes, the burden that their care would place on society.

Finally, regardless of what these people think of Singer’s views, to call for his resignation or condemnation on the grounds of “hate speech” is unconscionable. Singer is a philosopher, not a “hater”, and has garnered a considerable reputation by getting people to think about hard questions—questions that we’d prefer to avoid but which have serious social consequences. Are we justified in eating animals to slake our craving for meat? Should we well-off Westerners give away much of our income to help impoverished people in the rest of the world? Those are questions in the tradition of Socrates. For asking them, Socrates was sentenced to death. Today we’re more humane: we only try to get philosophers fired for posing uncomfortable questions.