New Zealand reader Heather Hastie’s website, Heather’s Homilies, is temporarily down: past posts are visible but she’s unable to put up new ones. This may be the result of a hacker attack, but we hope the site will be online soon. In the meantime, Heather sent me a piece of news that she wanted to write about. I found it intriguing because the subject, the increasing prevalence of Catholic exorcism, leading to the exorcism of an entire country, clearly demonstrates the Vatican’s conflict between science and faith. I suggested that Heather put her post here pending reactivation of her own site. She kindly assented, and here it is:

The Power of Christ Compels You: Leave Mexico!

Just when you thought the Roman Catholic Church might be heading towards rationalism with its encyclical on Climate Change, reality bites. It seems that the Church is so concerned with the state of morality in Mexico that an exorcismo magno (“great exorcism”) was carried out there on 20 May. This is apparently only the second time this rite has ever been performed; the first time was by Friar Sylvester at the urging of St Francis of Assisi in Arezzo, Italy in 1224 (see picture below).

In the modern church, the rite of exorcism had become a bit of an embarrassment – an eccentric uncle no one talked about. Some even refused to admit it existed. Belief in hell and the devil himself has been declining, especially in the West. In 1997, a New York Times article reported on a Barna Research Group survey of American beliefs. Although then 95% of the population still believed in God, and most also believed in heaven and angels, only 30% thought the Devil actually existed. Further, only 31% thought hell existed as “a place of physical torment.”

By December 2013, Pope Francis had been in office for nine months, and perhaps that was long enough for the gestation of some new ideas in the religious consciousness. A Harris poll reported that while U.S. belief in God had dropped to 74%, their belief in the Devil and Hell had both increased to 58%.

When Jorge Mario Bergoglio became Pope, he chose the name Francis after St Francis of Assisi. His explanation of that was that the Church needed to focus more on the poor and on its own spiritual nature. But it soon became evident that “spiritual” included the bad aspects of the word, and it wasn’t only St Francis’s work with the poor that the new pope wished to emulate. The “Pope Francis Effect” has become well known since his election in 2013. His frequent references to the Devil and the temptations of evil in his sermons have made exorcism once again a mainstream phenomenon.

In June last year, Pope Francis formally recognized the statutes of the International Association of Exorcists (AIE). They of course were thrilled by this acknowledgment; L’Osservatore reported the head of the organization, Rev Francesco Bamonte, considered “… the Vatican approval was cause for joy.” The AIE has around 300 members worldwide and was founded in 1990, but had never received formal Vatican recognition. They are the elite of the world’s exorcists, meeting every two years in Rome to discuss trends and techniques in their professions.

Coincidentally (yes, I’m being facetious), since the pope’s endorsement of the AIE’s work there has been an increase in demand for their services. The Telegraph’s Nick Squires interviewed several attendees of their week-long conference in Rome two months ago. The reporting is revealing and scary, although not for the reasons the exorcists believe. Father Cesare Truqui, Chief Exorcist of Chur, Switzerland, says that these days about a third of the phone calls received by Catholic officials in Rome relate to exorcism. Truqui also noted that exorcists are able to tell the difference between possession and mental illness. As he also claims to have taken part in around a hundred exorcisms, that’s clearly not true.

On the first day, the 150 attendees of the conference were addressed by Monsignor Luigi Neri, the archbishop of Ferrara. According to Squires, Neri ascribed the increasing need for exorcisms to atheism and consumerism. Throughout the week, other causes were examined as well. These included pornography, television, drug-taking, greater interest in the occult, and Satanism. Previously, Harry Potter and yoga have also been cited as risk factors for possession.

A 2013 YouGov poll demonstrates the widespread belief in the devil, possession and exorcism amongst Catholics. It shows that 94% of them believe that people are sometimes possessed by the Devil, with 67% believing in the power of exorcism (another 25% are unsure): 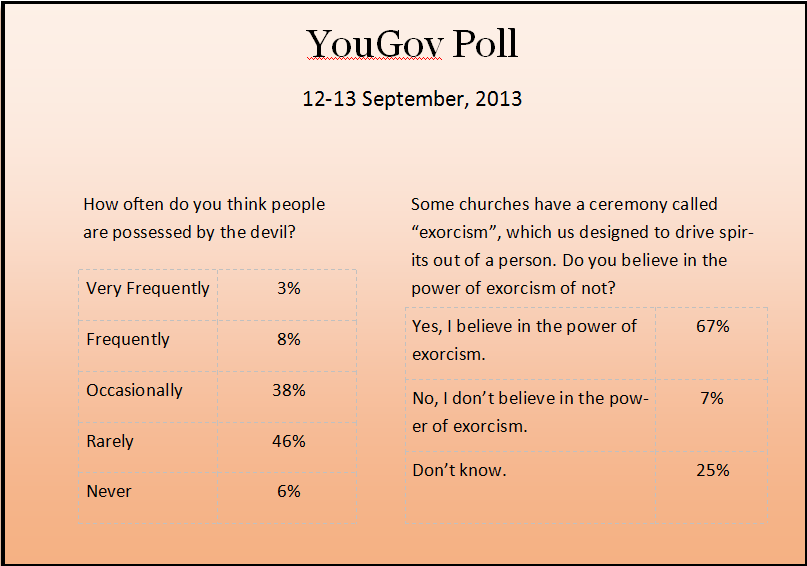 Dr Valter Cascioli, spokesperson for AIE, warned on Vatican Radio in November, 2014 of “an extraordinary increase in demonic activity.” Dr Vascioli is a psychiatrist; this is another example of the incredible potential for damage faith has when it replaces proper medical care. As Jerry said about exorcism in Faith vs Fact (page 238):

“… who knows how many disturbed people have been subjected to a frightening procedure that is harmless at best, but potentially dangerous, especially when those who use it misconstrue and thus ignore the real causes of mental illness?”

Dr Vascioli doesn’t even have the excuse of not knowing the real cause of mental illness; he simply ignores them in favour of faith.

As a result of the increased demand from believers for spiritual healing, the training and appointment of exorcists has become widespread. According to other reporting from Nick Squires, three years ago only about half of English and Welsh dioceses had an official exorcist; now almost all of them do. He has also seen similar increases in the number of exorcists throughout the world. For example, the archbishop of Madrid sent eight priests for training due to “an unprecedented rise” in instances of “demonic possession”.

And so we come to Mexico, which according to the Pew Research Center (2014) has a populace that is 81% Catholic. The Church decided it was time to do something about the problems of Mexico, which according to them are drug cartels, high levels of violence, and abortion. So what did they come up with? Education? Programs to help the poor? Community outreach? Job creation? Community health centres? No. What they decided on was prayer. But not just any prayer. For the first time in almost 800 years they were going to perform an exorcismo magno, and they were going all out! It wasn’t just a town this time, but a whole country!

Under the leadership of Cardinal Juan Sandoval Íñiguez, the archbishop emeritus of Guadalajara, a group of exorcists got together behind closed doors in the cathedral of San Luis Potosí, strategically located in the centre of Mexico for the best dissemination of anti-demonic forces. The event wasn’t announced beforehand because, according to the Catholic News Agency (CNA), they wanted “… to avoid any misguided interpretations of the ritual.” I’m not sure what they imagine “misguided interpretations” would entail. My only interpretation, which I don’t consider “misguided”, is that it was a colossal waste of time, and by not announcing it there wasn’t even hope for a placebo effect.

“If” it doesn’t work, though, those taking part have already provided several explanations. Spanish demonologist and exorcist Father José Antonio Fortea, who attended the ceremony, spoke to CNA:

The Spanish exorcist explained, however, that the celebration of this ritual will not automatically change the difficult situation Mexico is going through in a single day.

“It would be a big mistake to think that by performing a full scale exorcism of the country everything would automatically change right away.”

Nevertheless, he emphasized that “if with the power we’ve received from Christ we expel the demons from a country, this will certainly have positive repercussions, because we’ll make a great number of the tempters flee, even if this exorcism is partial.”

“We don’t drive out all the evil spirits from a country with just one ceremony. But even though all will not be expelled, those that were removed are not there anymore.”

Fr. Fortea emphasized that “when the exorcists of a country drive out its demons, it has to be done in faith. You’re not going to see anything, feel anything, there’s not going to be any extraordinary phenomenon. We have to have faith that God conferred on the apostles a power, and that we can use this power.”

I bet Beelzebub is shaking in his boots. 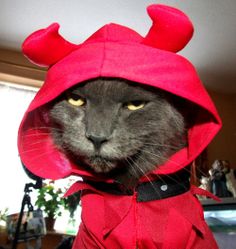