Here are two of the last meals I had in Singapore. The first was at a local roti joint near the Chin’s house. While Melissa’s parents were visiting relatives, she and I repaired to the joint for a casual meal of breadlike substances, which were excellent.

This is roti prata, a grilled bread (with cheese) served with a spicy chili sauce: 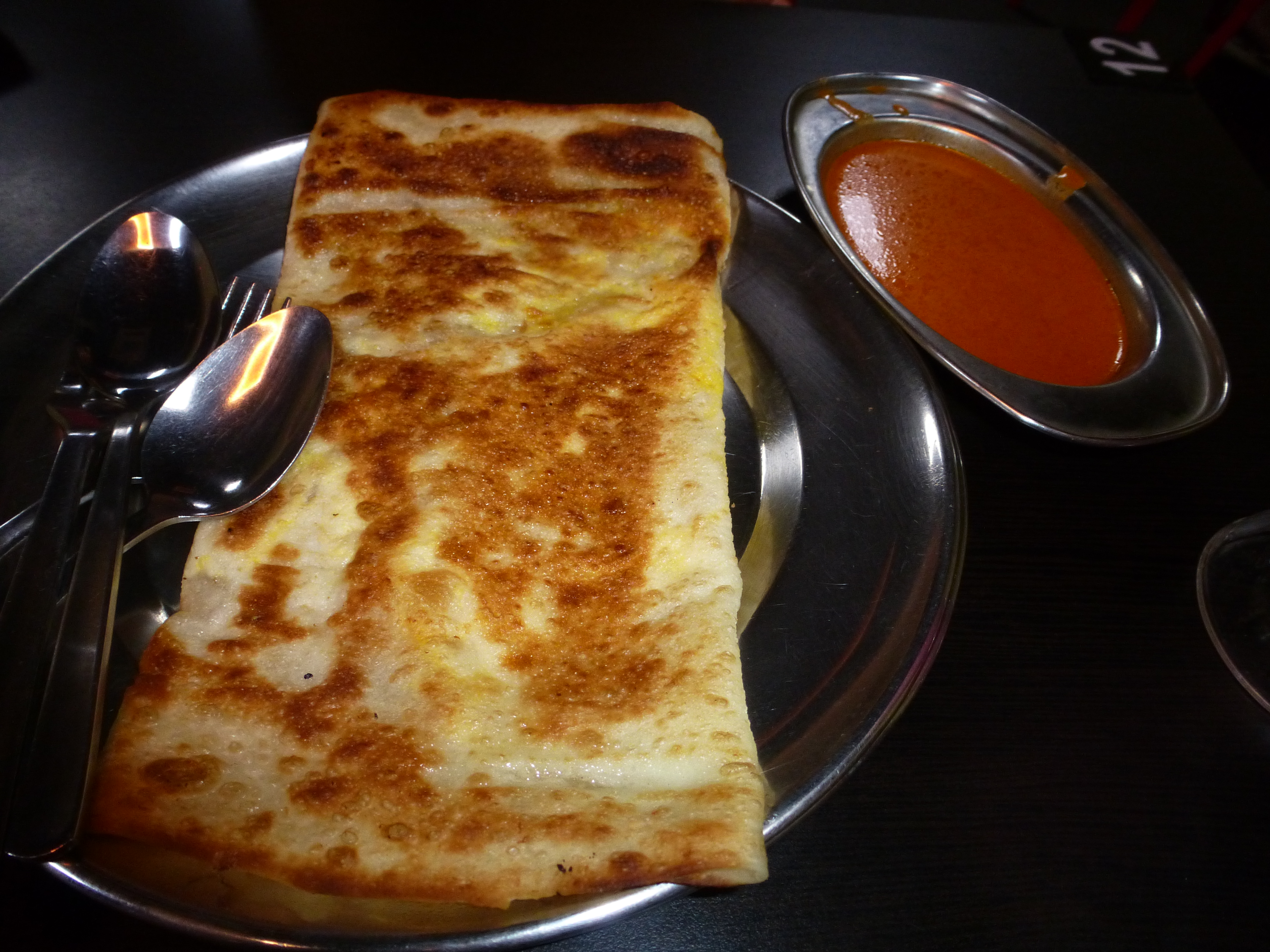 Along with that we had a more substantial bread, murtabak, filled with egg and meat. It’s the Singaporean version of a Chicago deep-dish pizza, and it, like the roti, was excellent. 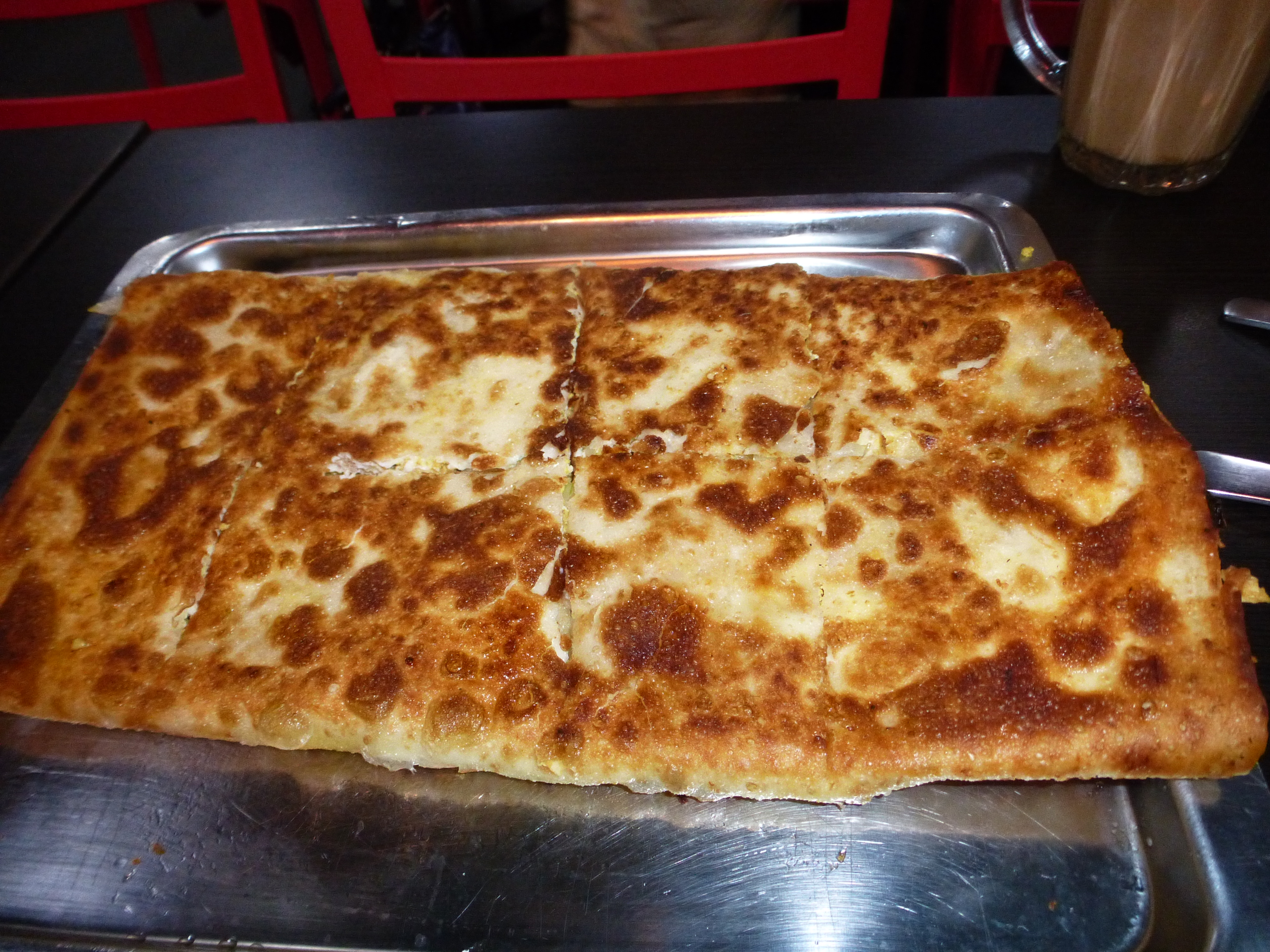 We also had mee goreng, a spicy dish of fried noodles and vegetables topped with an egg: 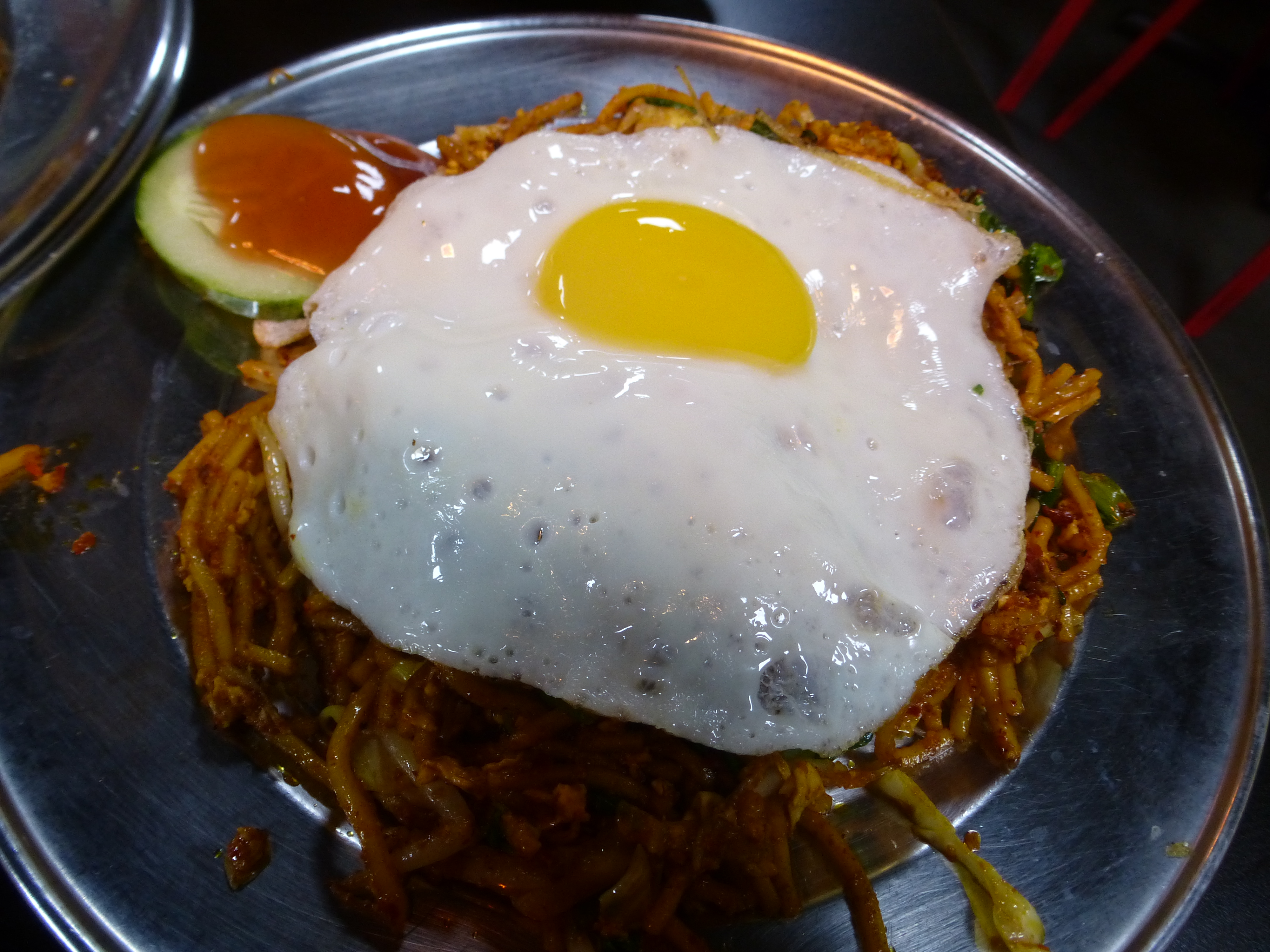 I washed it all down with a glass of bandung, an iced mixture of evaporated milk and rose syrup, which gives the drink a lovely pink color and unique (and appealing) taste. 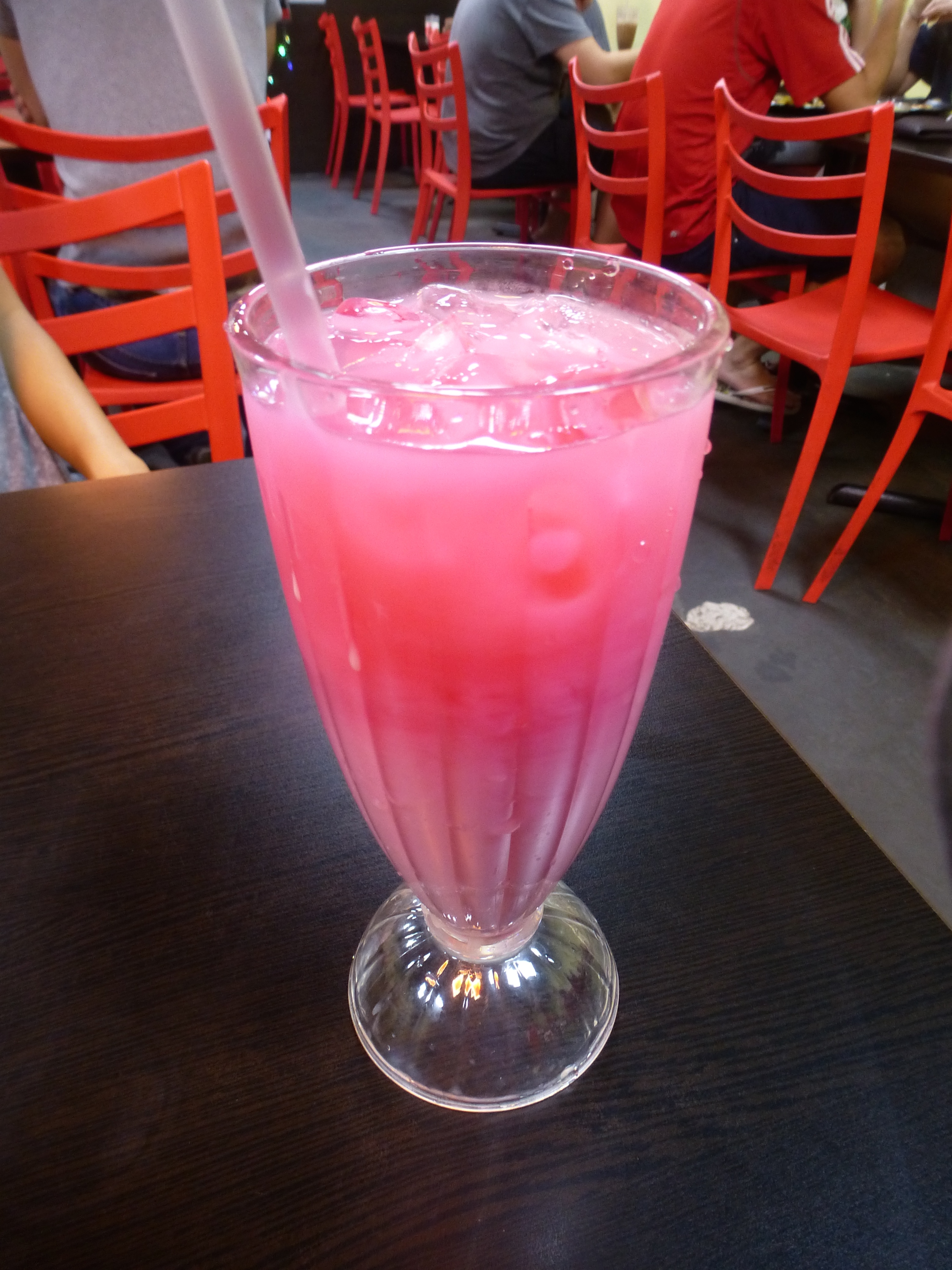 For dessert we had tissue prata, a sweetened flatbread drizzled with condensed milk and sugar, and served standing upright. I didn’t take a photo, but this is what it looked like: 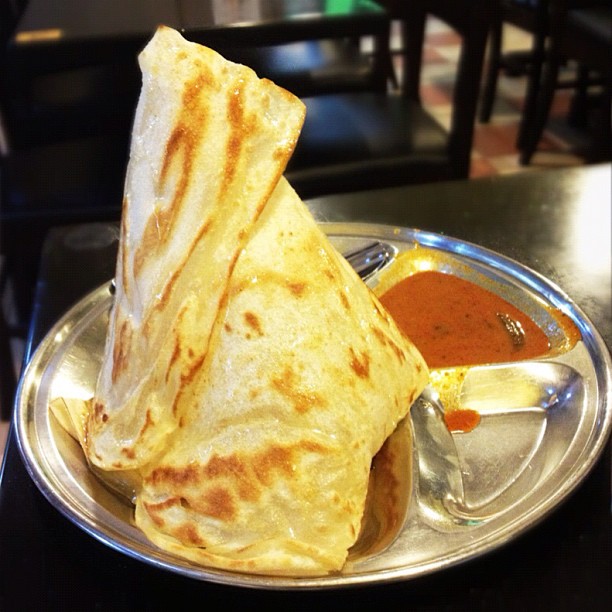 For my Last Supper in Singapore, Michael Chin treated us all to a wonderful seafood dinner at a very famous local chain: Long Beach, where the seafood is kept live in tanks and prepared on the spot: 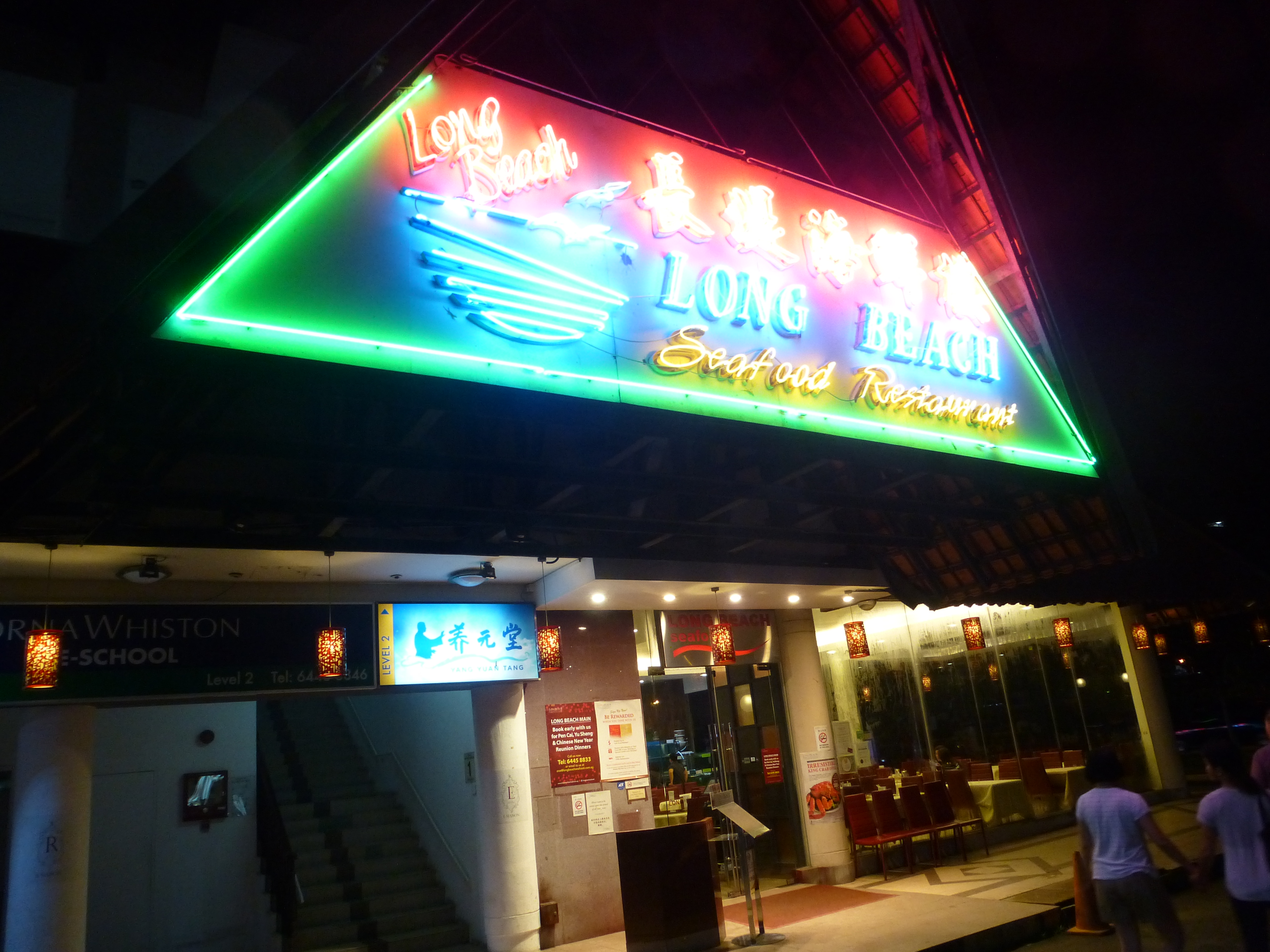 There are tanks overcrowded with lobster from the U.S. (sad), and less crowded tanks with crabs and molluscs: 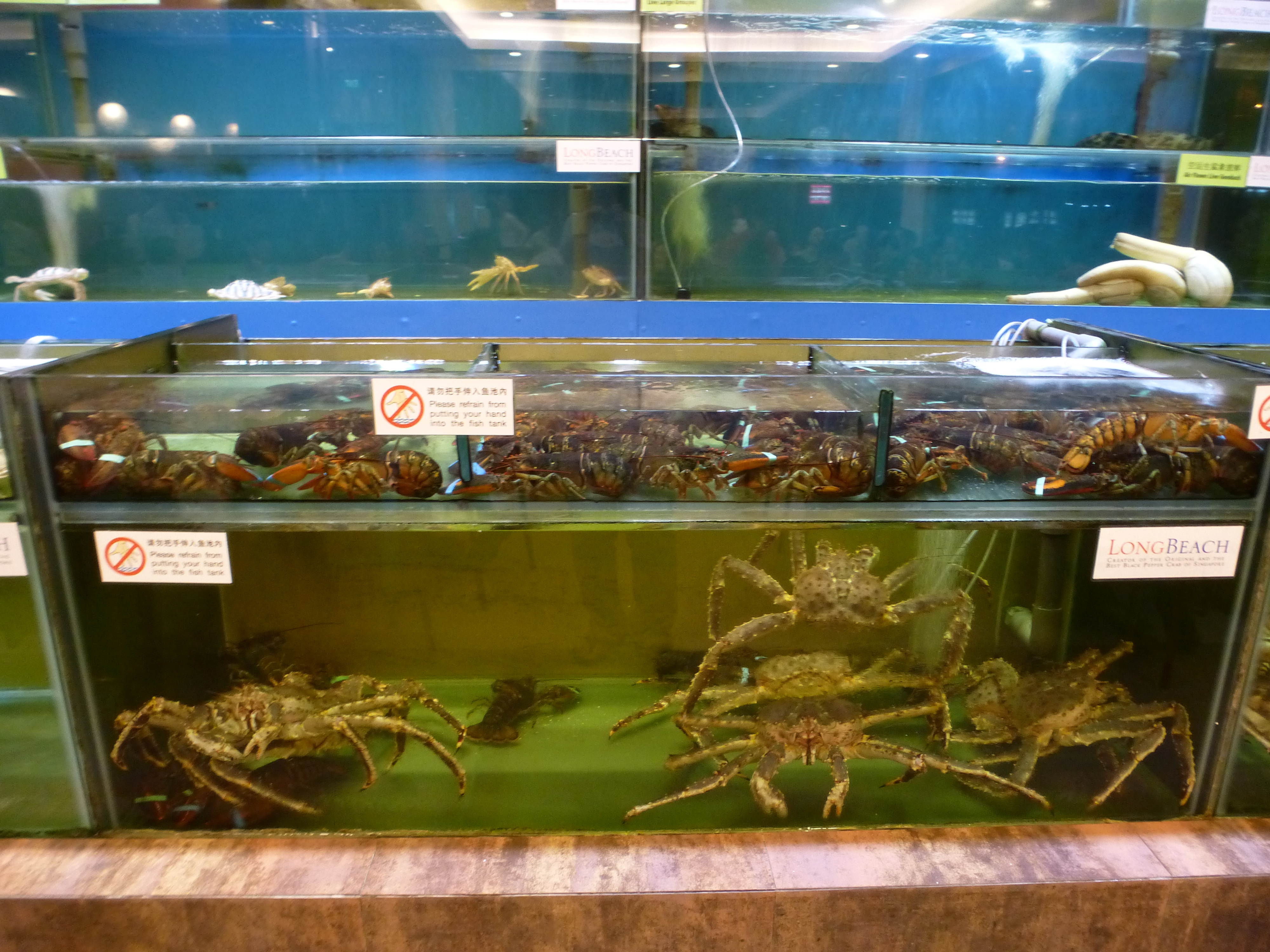 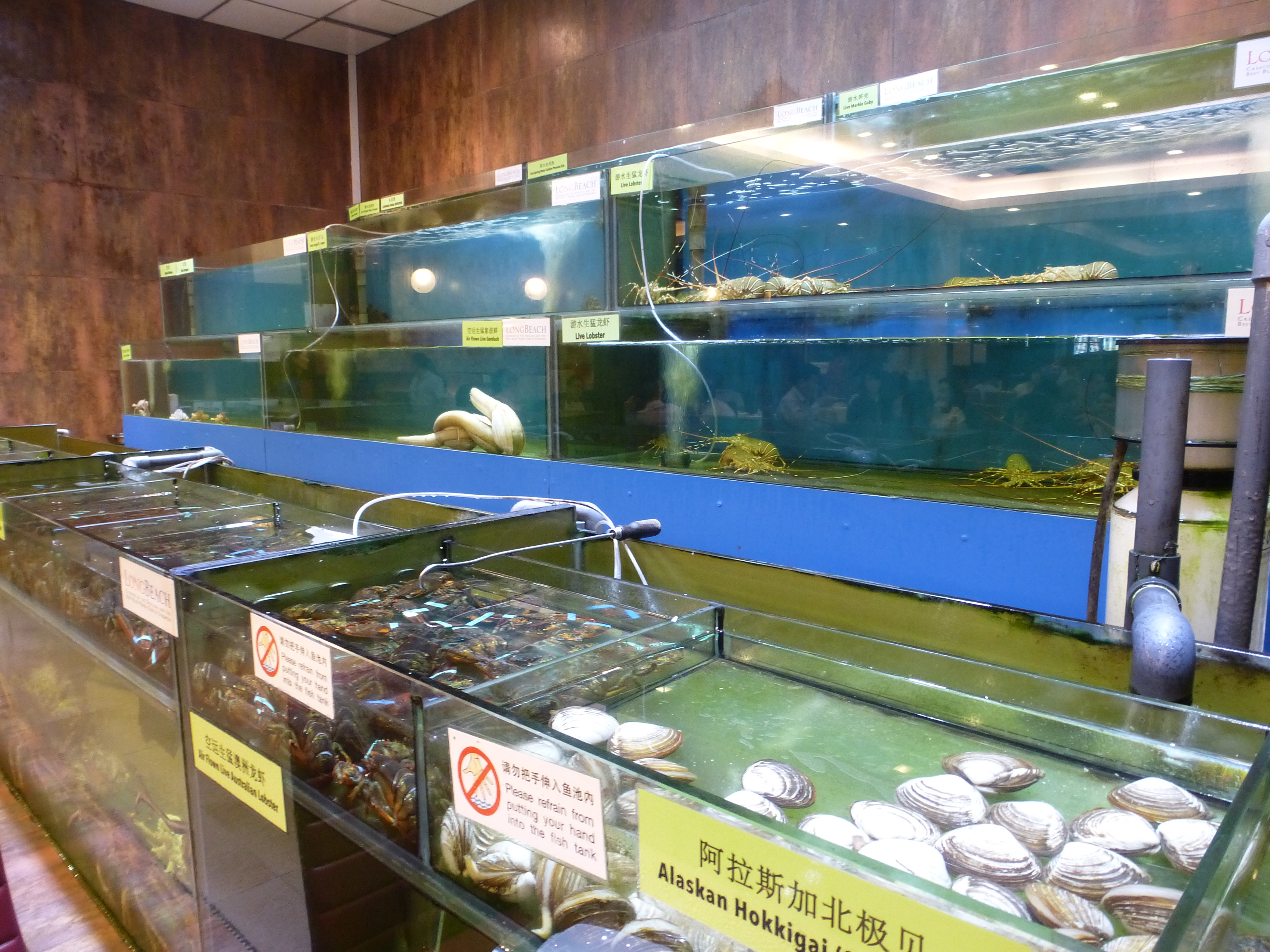 Three Pacific geoduck (pronounced “gooey-duck”), Panopea generosa—the largest burrowing mollusc in the world. The siphon, which can be up to a meter long, is used in various Asian dishes. Though we didn’t have it at Long Beach, I did eat it once in Vancouver at a gala Chinese dinner, served with black bean sauce. It was splendid, with a firm, clean taste like an abalone, only clammier. 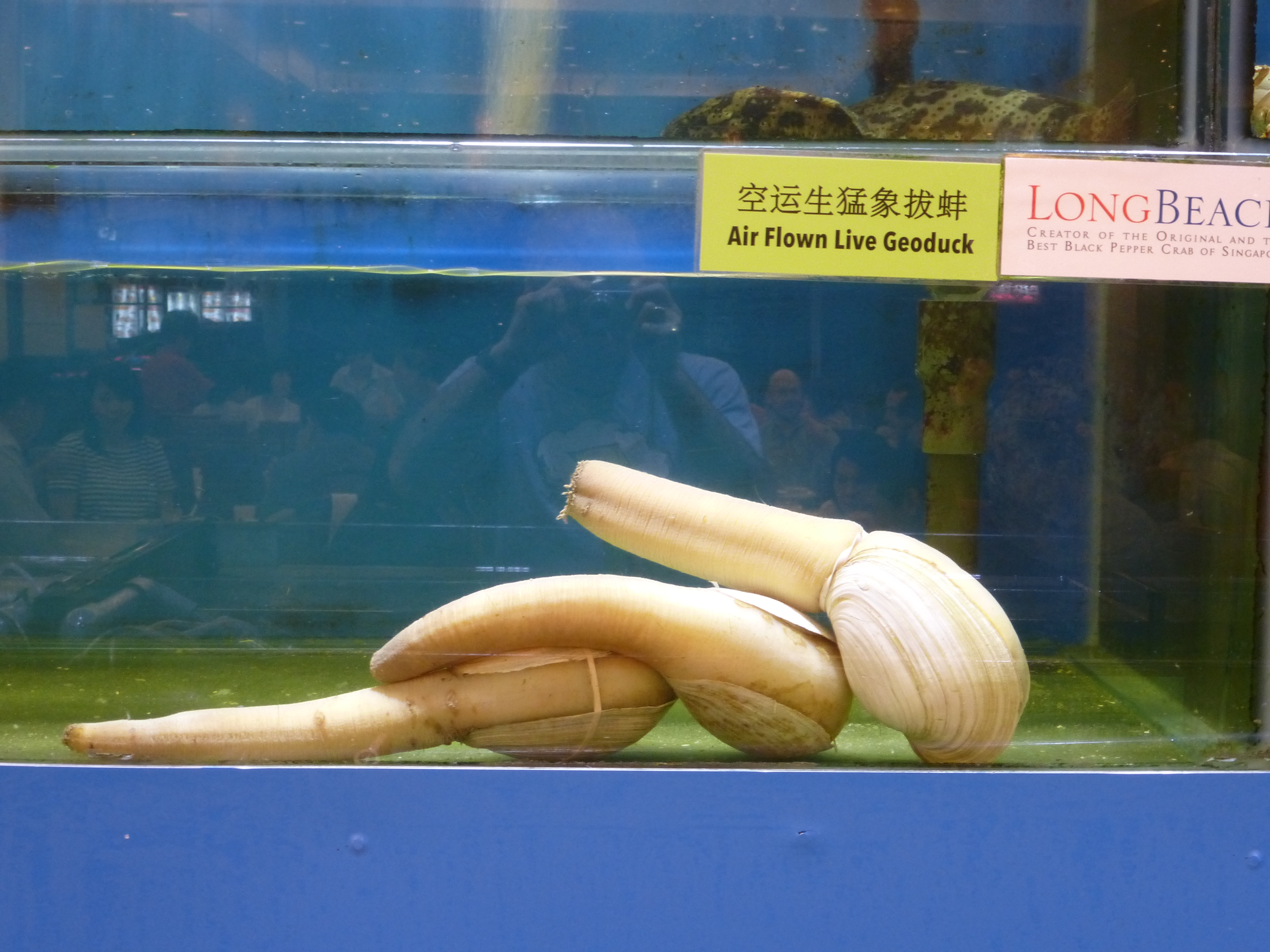 Our table was set with various chili sauces. These often look similar but taste different, and each restaurant makes its own: 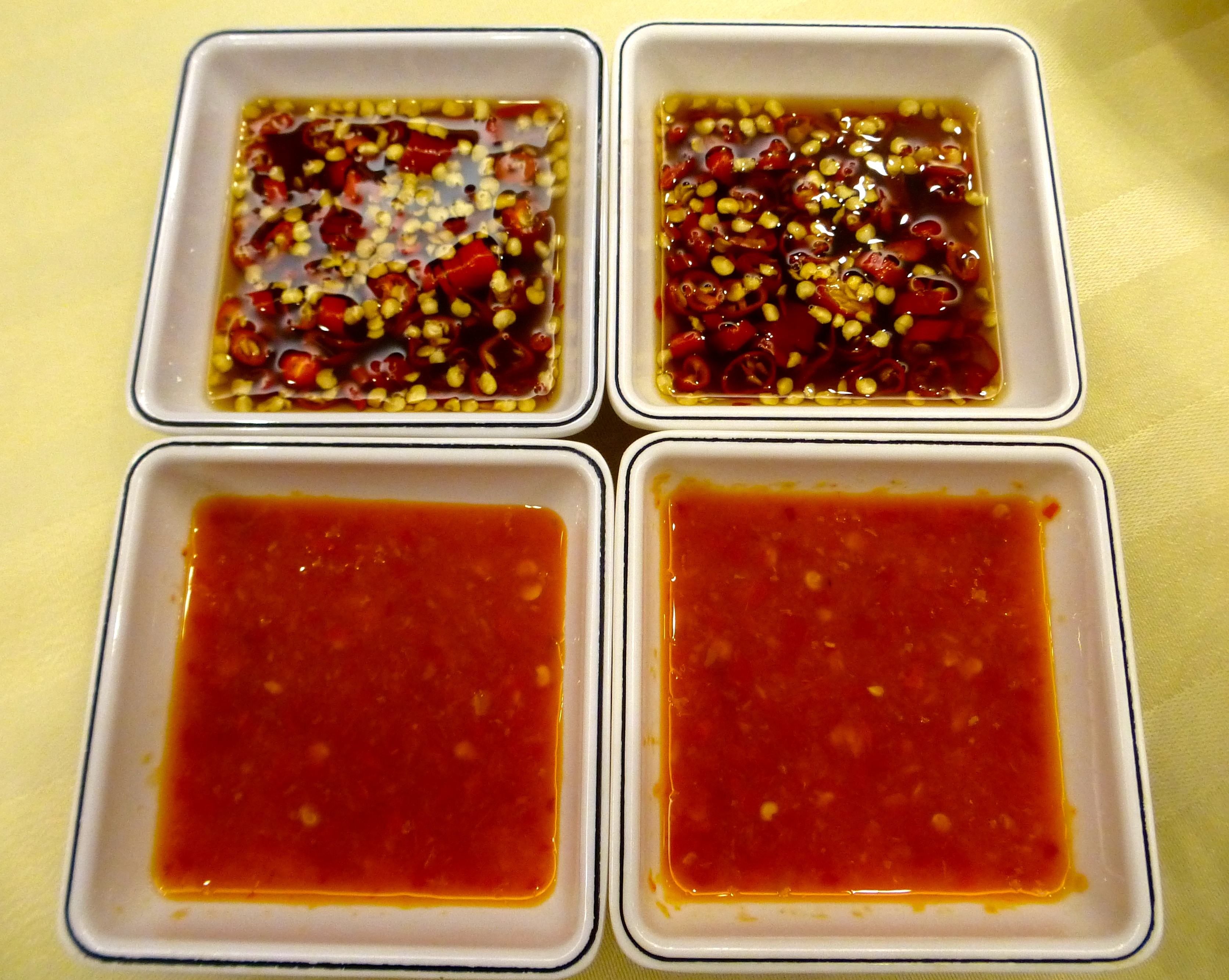 We started with meat: a delicious roast duck with shrimp chips and stir-fried greens. 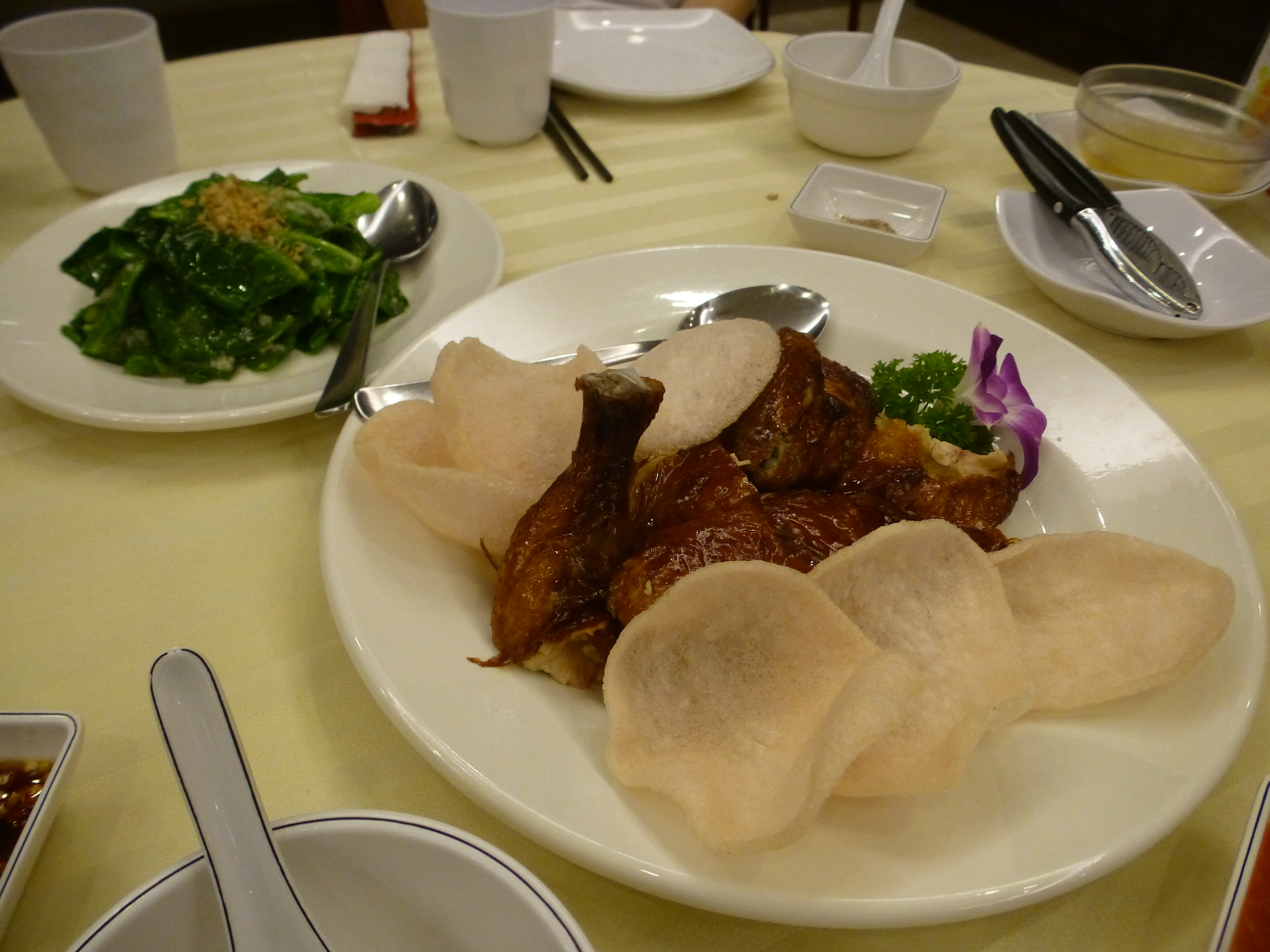 Then fried rice with crab: 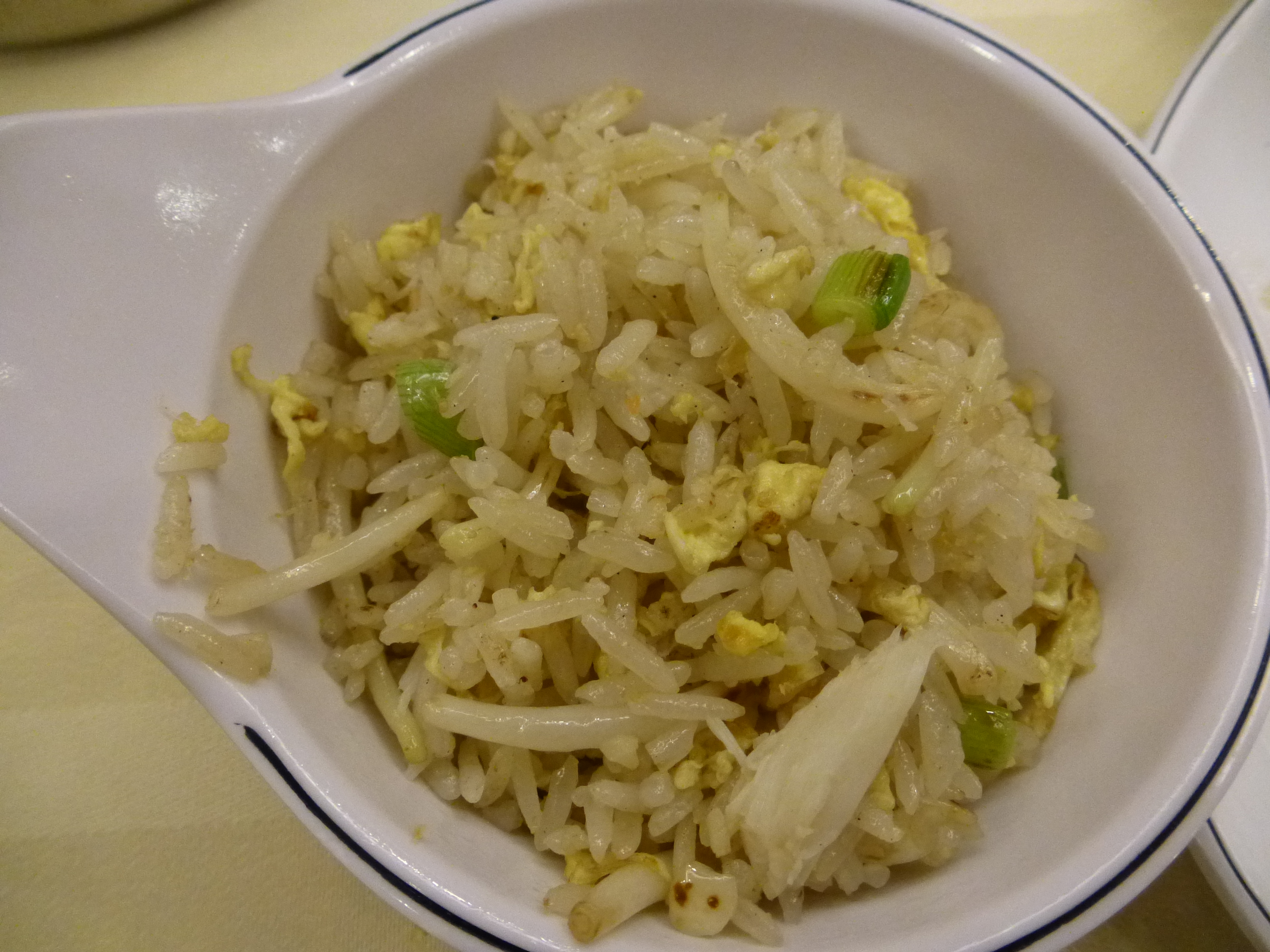 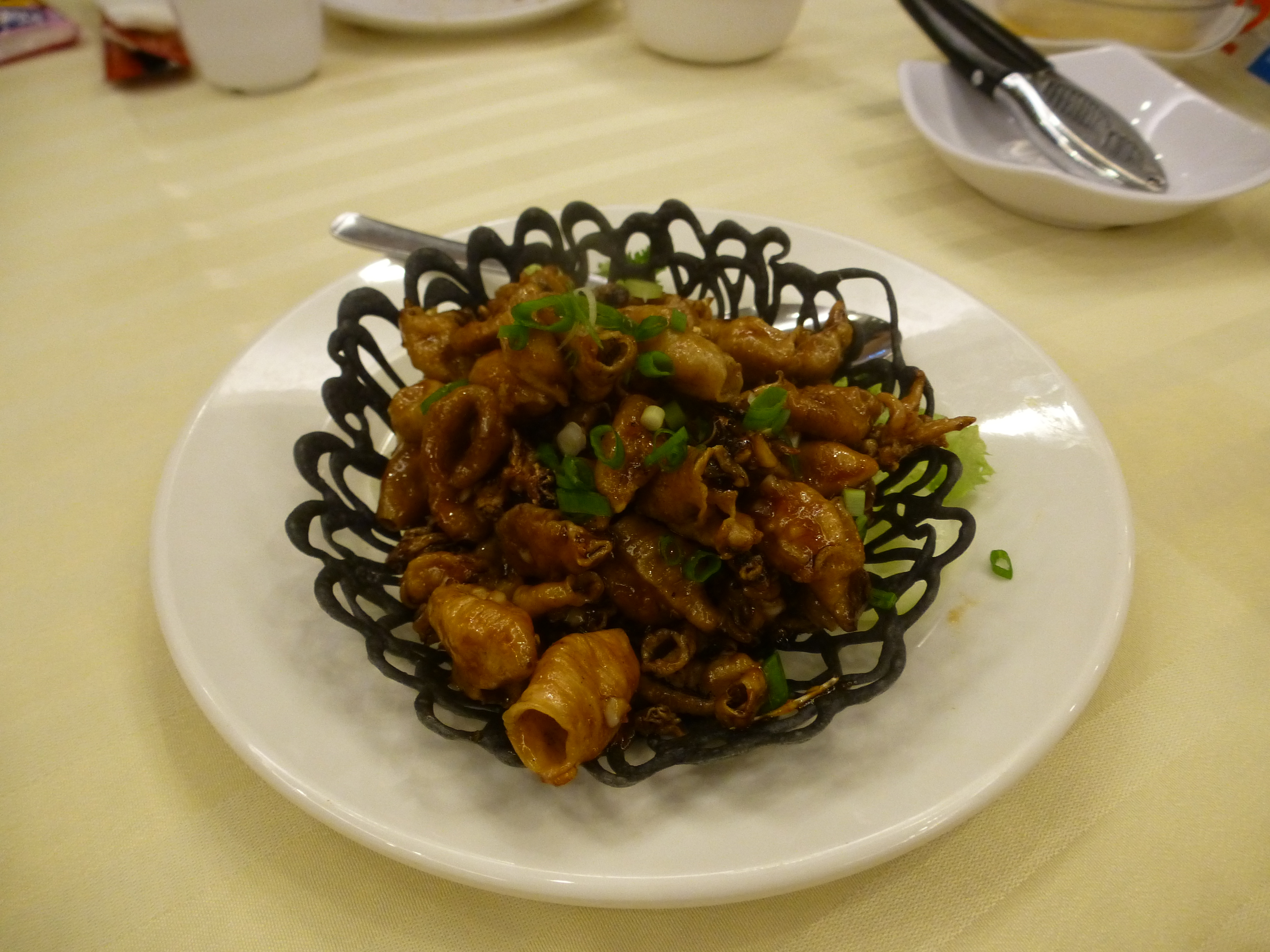 And on to the evening’s highlight: crab. We had two. This is steamed crab. I’m not sure of the species, but it was great, with huge, meaty claws and substantial meat at the base of the legs: 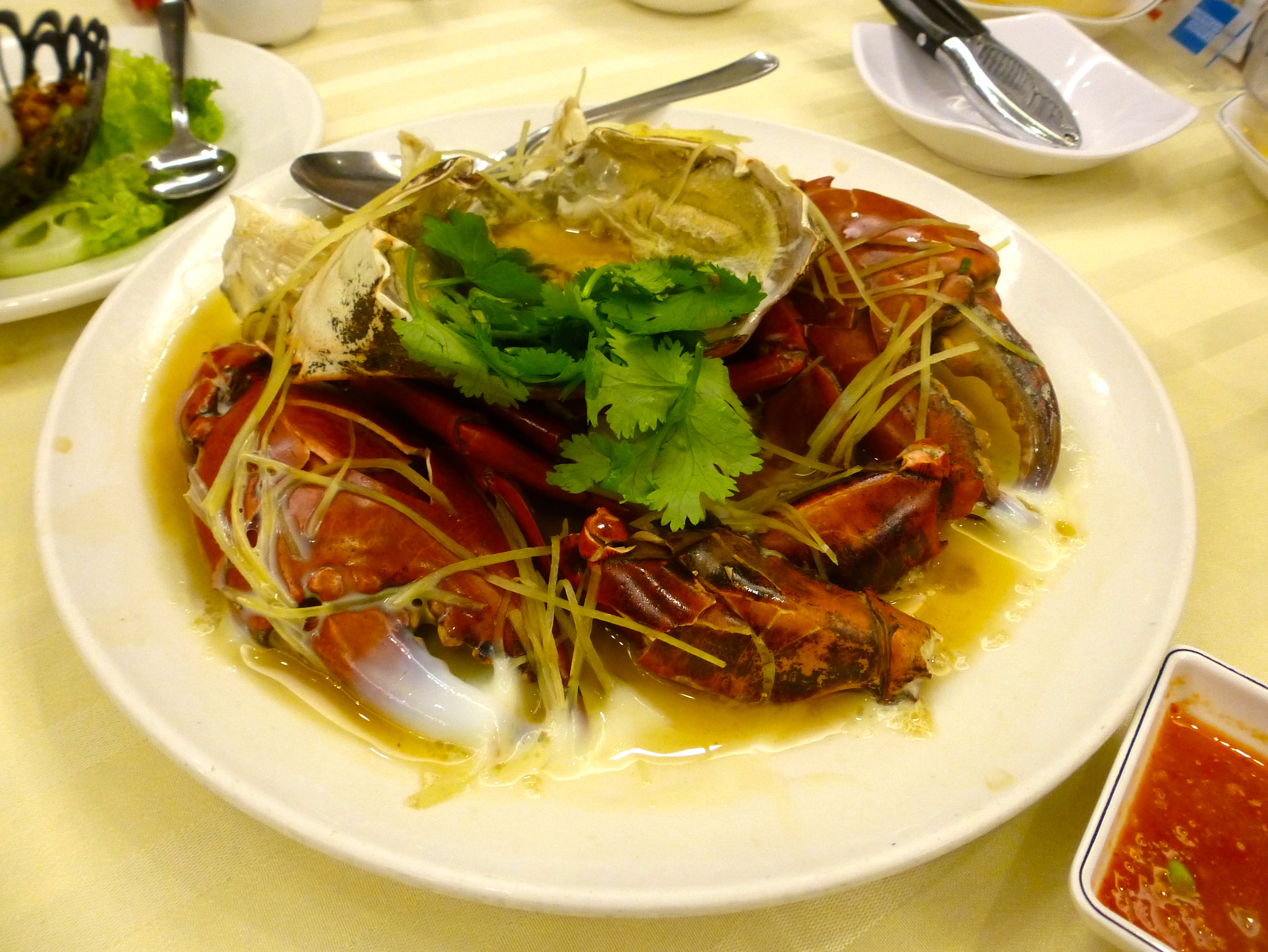 And the highlight of highlights: the classic Singapore dish chili crab, a huge crustacean cooked in a fantastic sauce of tomato, garlic, chili, and eggs. Fried buns were served on the side to sop up the sauce, which is a treat in itself, but even more so when slopped atop a big hunk of crab or the soft innards of a bun. This was truly one of the best dishes I’ve eaten in my life. It is not cheap, but life is short! 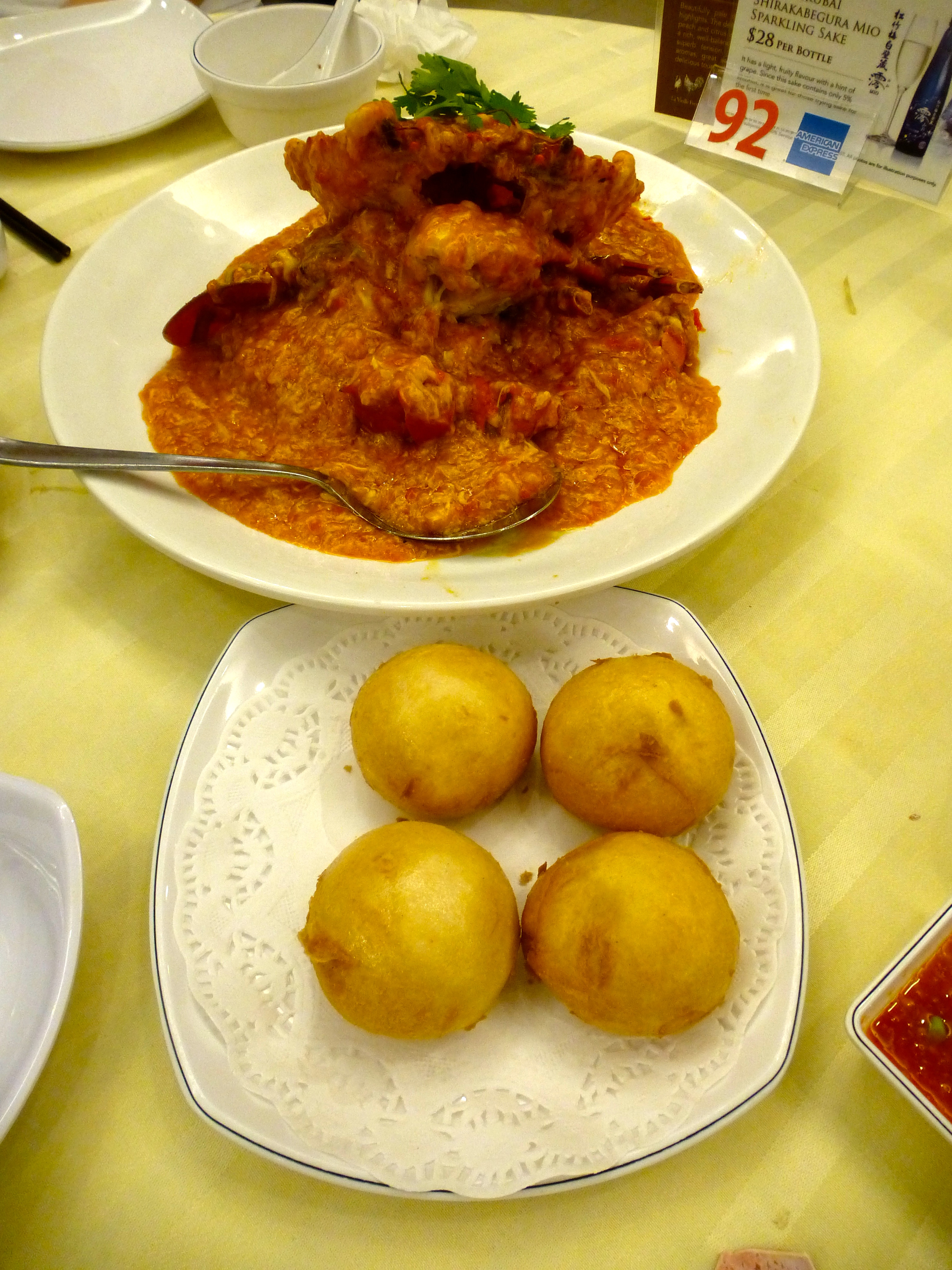 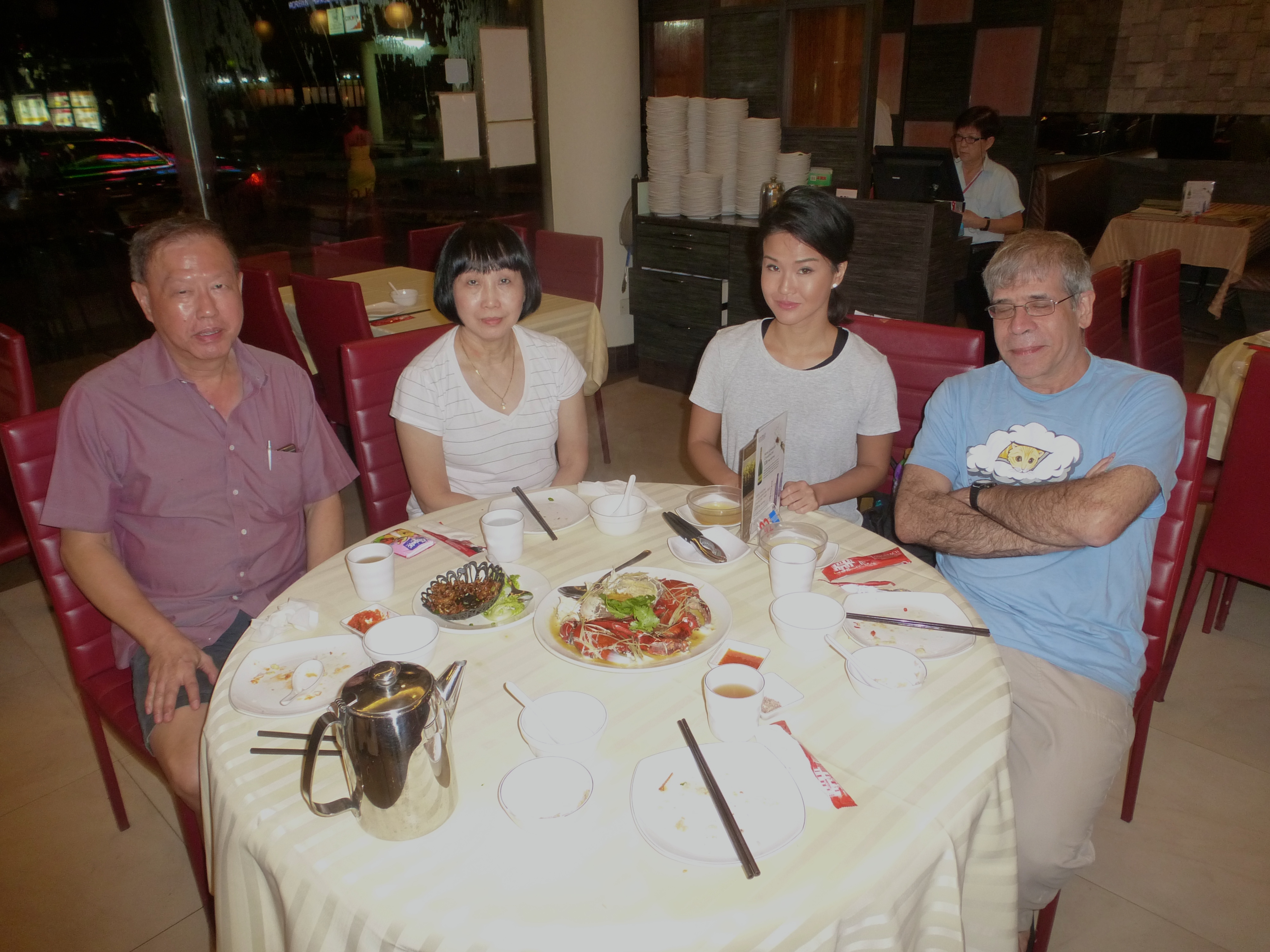 And so endeth my culinary adventures in Singapore. They were fantastic, and I don’t think I missed a single one of the country’s signature dishes.

But a new adventure has begun: Hong Kong. I’ve already spent two days here, and this morning went to one of the city’s renowned dim sum parlors, to be described (with photos) in a later post.

Many thanks again to Michael, Annie, and Melissa for their ultra-warm hospitality and kindness.