Only a lack of time prevents me from writing in extenso about the infamous durian, the fruit that you either hate (the vast majority of humans) or love (the select few).  The pronounced disparity in whether people can stomach the fruit is a mystery to me; perhaps, like the perception of cilantro, it reflects a genetic polymorphism. The highlight of this post (below) is a video, made by Melissa Chen, in which I was “encouraged” to try the fruit, but let me begin with three paragraphs from the long Wikipedia article about it:

The durian (/ˈdjʊriən/) is the fruit of several tree species belonging to the genus Durio. The name “durian” is derived from the Malay-Indonesian languages word for duri or “spike”, a reference to the numerous spike protuberances of the fruit, together with the noun-building suffix -an. There are 30 recognised Durio species, at least nine of which produce edible fruit, and over 300 named varieties in Thailand. Durio zibethinus is the only species available in the international market: all other species are sold only in their local regions. There are hundreds of durian cultivars; many consumers express preferences for specific cultivars, which fetch higher prices in the market.

Regarded by many people in southeast Asia as the “king of fruits”, the durian is distinctive for its large size, strong odour, and formidable thorn-covered husk. The fruit can grow as large as 30 centimetres (12 in) long and 15 centimetres (6 in) in diameter, and it typically weighs one to three kilograms (2 to 7 lb). Its shape ranges from oblong to round, the colour of its husk green to brown, and its flesh pale yellow to red, depending on the species.

Some people regard the durian as having a pleasantly sweet fragrance; others find the aroma overpowering with an unpleasant odour. The smell evokes reactions from deep appreciation to intense disgust, and has been described variously as rotten onions, turpentine, and raw sewage. The persistence of its odour, which may linger for several days, has led to the fruit’s banishment from certain hotels and public transportation in Southeast Asia.

It was always Melissa’s intention, as I stayed at her parents’ house in Singapore, to acquaint me with durian. She herself had tried it many years ago, and abhorred it. But she’s an intrepid woman, and wanted to try it again to see if her tastes might have changed. Her mother, Annie, loves the stuff, but her father Michael is in the “can’t stand it” class. The naturalist Alfred Russel Wallace, however, who was headquartered in Singapore for a long time, absolutely loved the fruit; you can read his loving description here.

And so, while i was resting up from my cold, Melissa and her mom ventured into Singapore’s red-light district (prostitution is legal there), which also happens to be the place where one can buy durians. They forked out 80 Singapore dollars (about $58 US!), for one specimen of this fruit, supposedly of the best type.

Me with the pricey fruit: 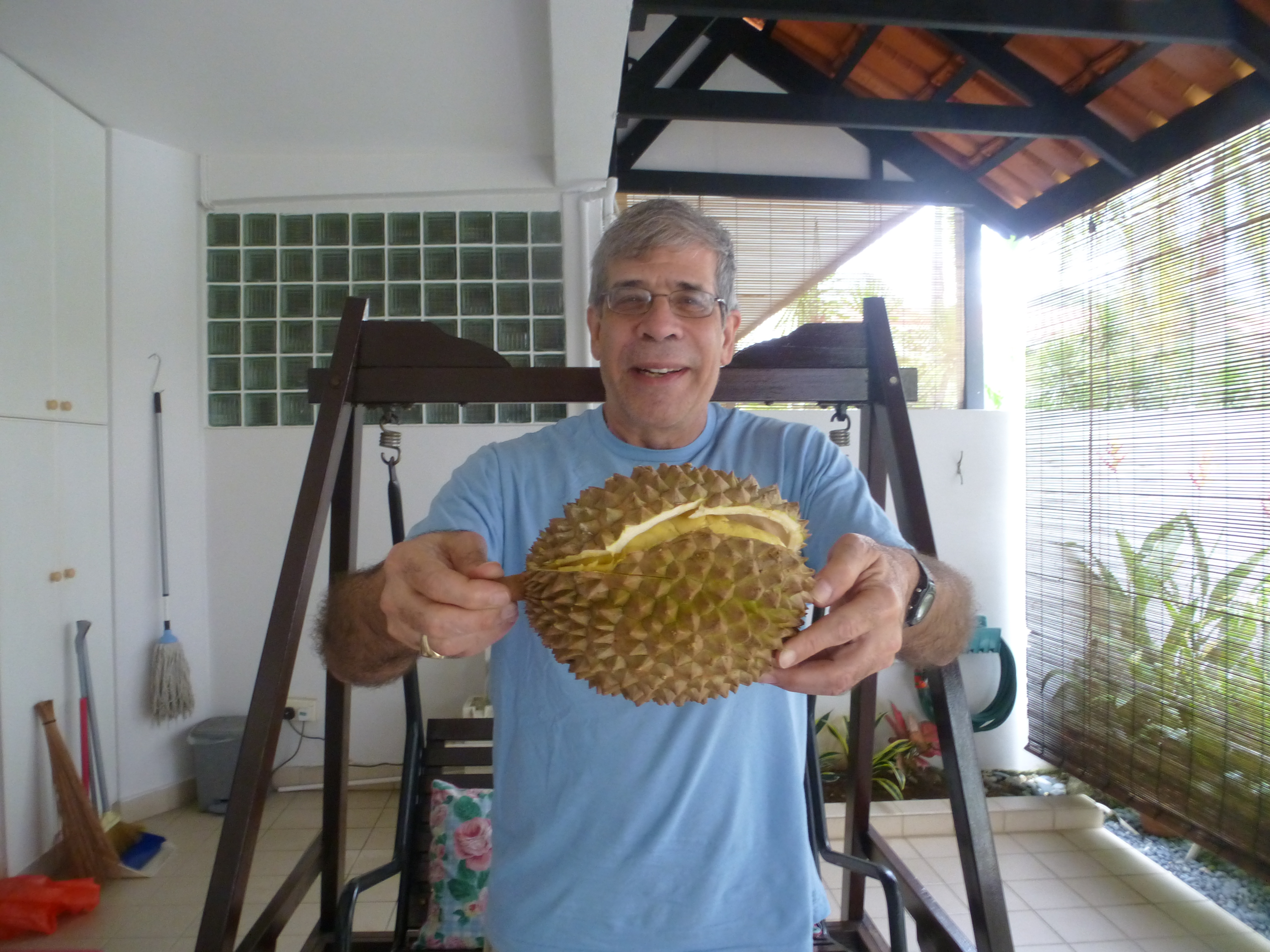 We opened the beast to reveal what looks like the thing that came out of that guy’s stomach in the movie Alien: 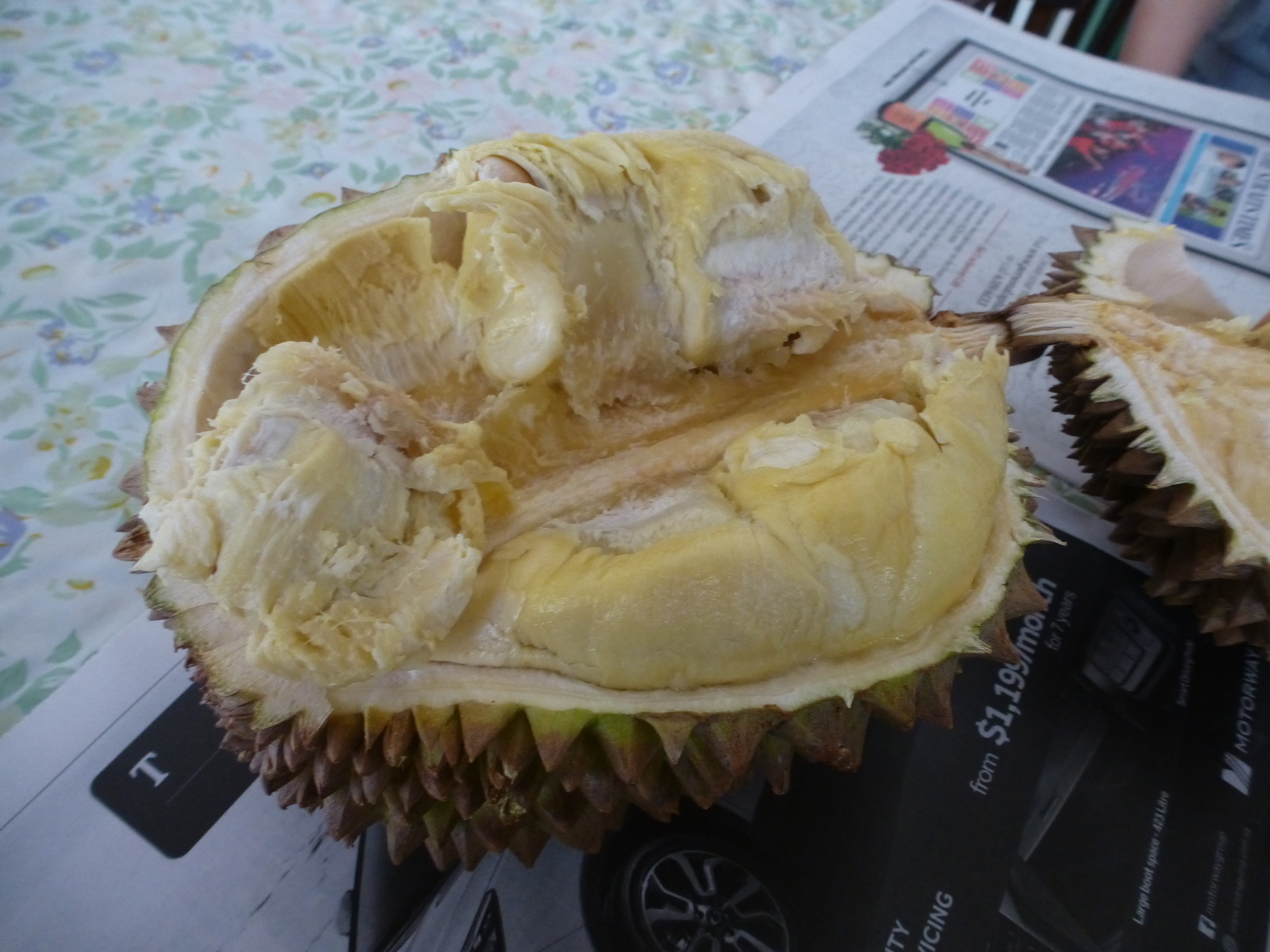 Melissa posted the video below on her Facebook page, as well as the following text.

Scores have been written about the durian, which, depending on whether you are wrong or not, is either culinary seppuku or gastronomic heaven.

I wouldn’t let Prof. Jerry Coyne leave Singapore without trying what is known in these woods as the “King of Fruits.” My mom drove to the red light district, picked up a thorny parcel of death for $80 and stashed it in a cooler box in her trunk. In the short 15 min drive home, the entire car stank of skunk fart and rotten flesh. This is why you’ll get fined for bringing one on public transport here.

Alfred Russel Wallace, who played second fiddle to Charles Darwin wrote that “it is in itself perfect. In fact, to eat Durians is a new sensation worth a voyage to the East to experience. … as producing a food of the most exquisite flavour it is unsurpassed.”

While Anthony Bourdain, keen observer of culture and sociology through the lens of food, described the experience as akin to “French-kissing your dead grandmother.”

So, what is Jerry’s verdict? Is he in Camp Wallace or Camp Bourdain?

Melissa also made subtitles for the video. Be sure to watch to the end!

Annie loved it, though, and ate mass quantities, giving it a “thumbs up”. The remainder was carefully (and hermetically) packaged for her relatives: 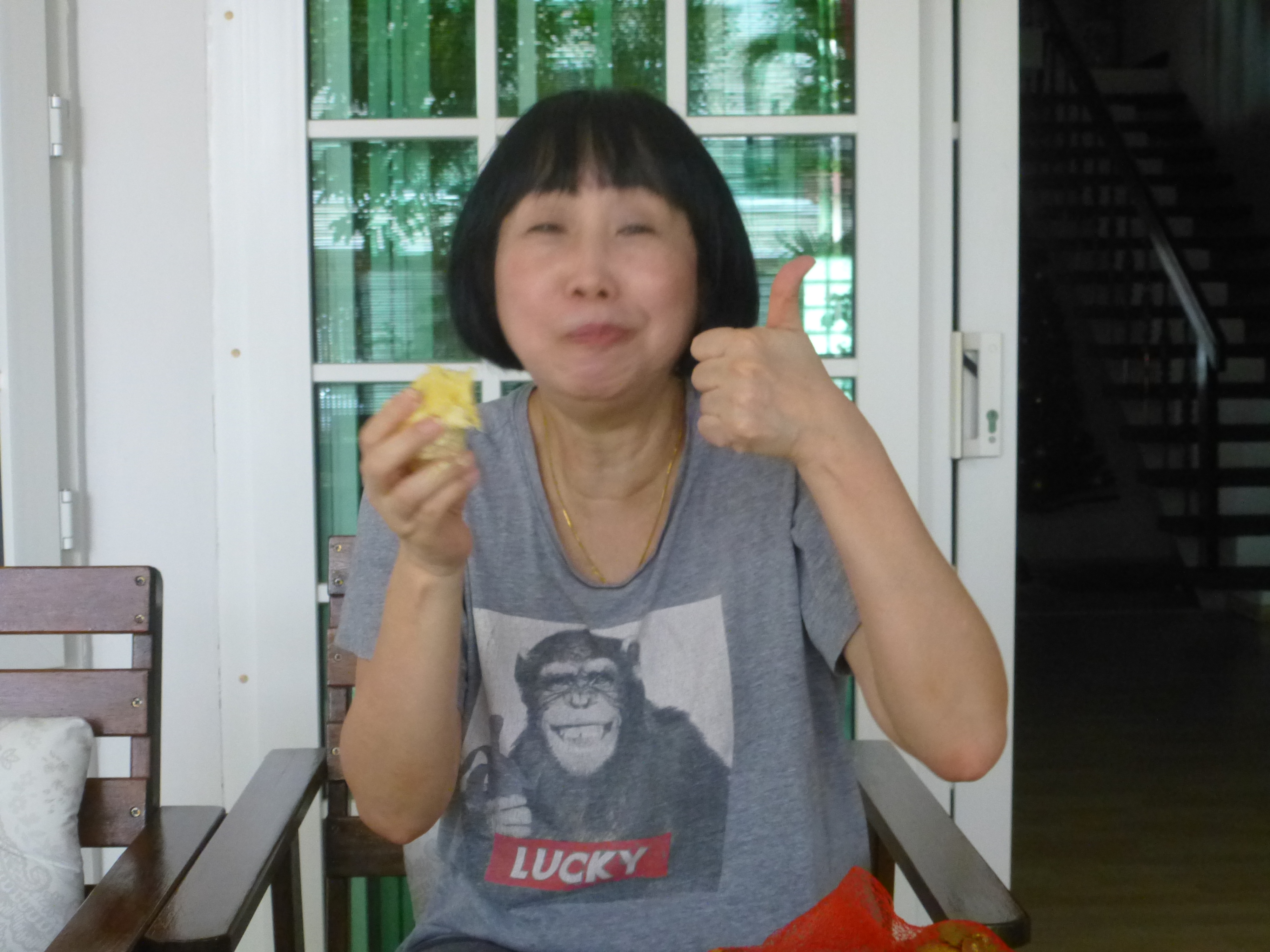 After two of the three of us were sickened by our encounter with the durian, we cleansed our palates with a really delicious local fruit, the purple mangosteen (Garcinia mangostana): 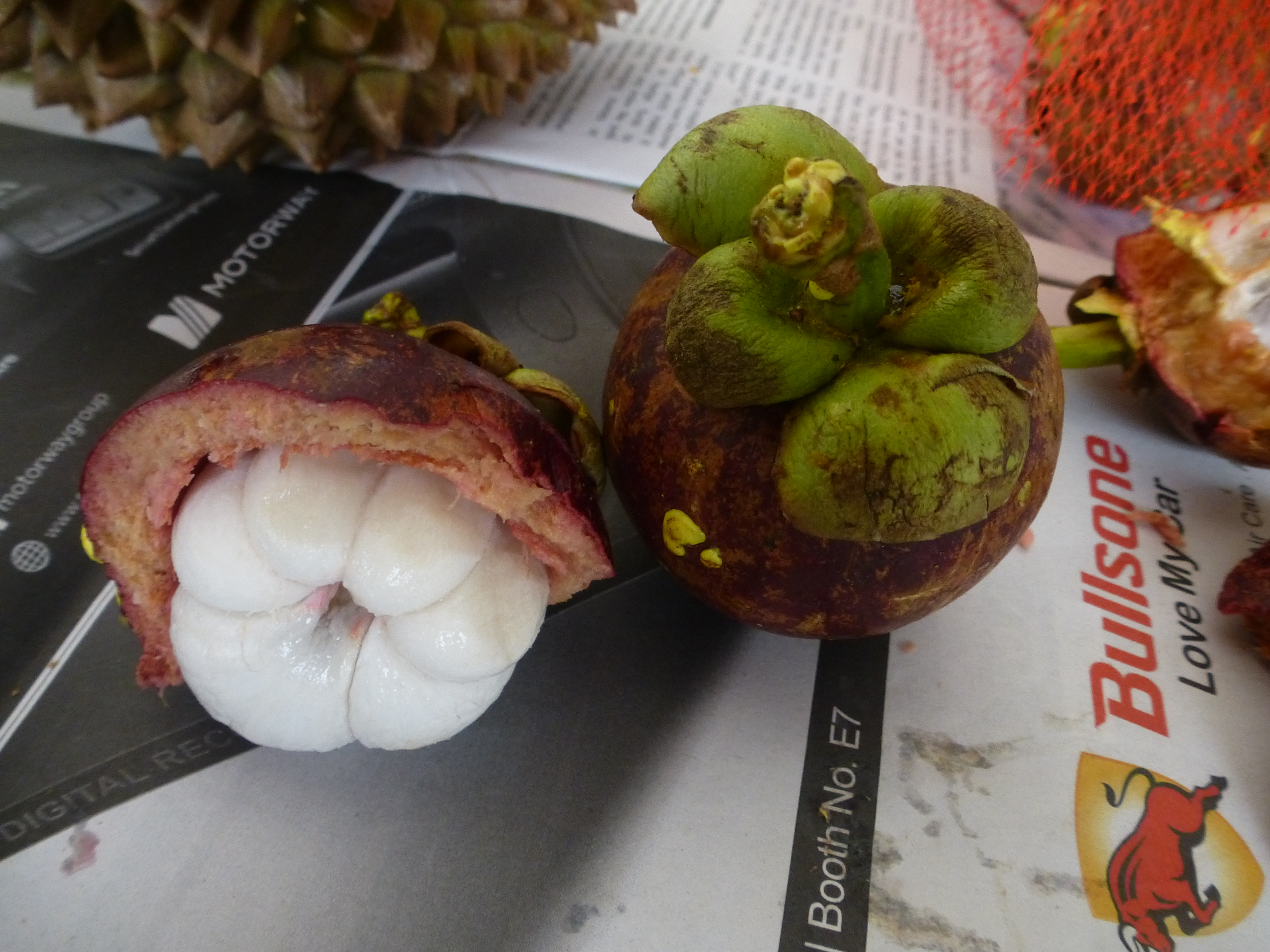 52 thoughts on “In which I eat the dreaded durian”