As Steve Pinker discusses in his new book, The Sense of Style, the use of “his” or “her” when writing about general situations can be tricky. For example, using only the masculine form in sentences like “A scientist shouldn’t invariably put his name on papers that come from his lab,” does marginalize women, and I can see how that would irritate the many women who are scientists—or readers. Times have changed, and it’s a form of sexism to always use “his”, which ignores half the population.

My own solution has been to alternate between “him” and “her” or “his” and “hers”, so that nobody gets left out. Or you can use “his/her”  or “his or her”, but that is a bit awkward.  But for many that’s still not a good solution, as it leaves out people who don’t identify as either male or female. Granted, that’s a small minority of people, but the “his/her” dichotomy does bother those who want to recognize that—although there is a strong bimodality of those who identify as male or female—there are some people in the dip between the peaks.

What has happened is that a variety of alternative pronouns have arisen that are gender-neutral, like “xe” and “hir” instead of “he/she” or “him/her.”  And this usage has now come to campus, at least in Tennessee. As WATE, the ABC station in Knoxville reports, the University of Tennessee at Knoxville is encouraging students and faculty to change the pronouns to neutral forms:

The University of Tennessee Office for Diversity and Inclusion is asking students and faculty to use the pronouns in order to create a more inclusive campus. They say it alleviates a heavy burden for people expressing different genders or identities.

“We should not assume someone’s gender by their appearance, nor by what is listed on a roster or in student information systems,” Donna Braquet, the director of the University of Tennessee’s Pride Center said. “Transgender people and people who do not identify within the gender binary may use a different name than their legal name and pronouns of their gender identity, rather than the pronouns of the sex they were assigned at birth.”

For the first week of classes, Braquet is also asking teachers to ask everyone to provide their name and pronoun instead of calling roll. “The name a student uses may not be the one on the official roster, and the roster name may not be the same gender as the one the student now uses,” ze said.

“These may sound a little funny at first, but only because they are new,” Braquet said. “The she and he pronouns would sound strange too if we had been taught ze when growing up.”

Braquet said if students and faculty cannot use ze, hir, hirs, xe, xem or xyr, they can also politely ask. “’Oh, nice to meet you, [insert name]. What pronouns should I use?’ is a perfectly fine question to ask,” ze said.

Here’s the chart of guidelines (this is not a requirement or an official policy) given to UT faculty and students: 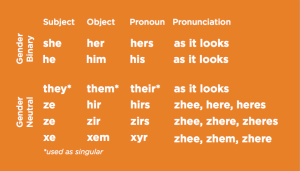 I don’t have strong feelings about this one way or the other, except to say that I don’t think it will work given the tenacity of current usage, and that it seems awkward to ask someone when you meet them what their preferred pronoun is. The vast majority of the time you’ll just get the conventional answer. My own feeling is to wait until someone tells you that they don’t want you to use the word you thought was appropriate—and, as ever, to be sensitive when writing or speaking to not stick to just one of the “he” or “she” usages.

But because Pinker has pondered this issue, I asked him what he thought of the Tennessee guidelines, and received the following response, which I reproduce with permission (note that Pinker emails are always perfectly written):

I did write about gendered pronouns in The Sense of Style, including mention of the dozens of gender-neutral pronouns that have been floated over the course of more than a century. Not surprisingly, none of them caught on. In general it’s difficult for anyone to engineer linguistic change other than governments, or professional societies within their publications, partly because it’s difficult to get hundreds of millions of people to do what you want, but  also because conventions require “common knowledge” – everyone has to know that everyone else knows that everyone else knows … ad infinitum, that the new convention will be followed (see the attached paper, whose intro also makes some seldom-appreciated points about the evolution of cooperation – biologists tend to conflate it with the evolution of altruism, but there are important evolutionary puzzles in the evolution of mutualistic, win-win cooperation as well). Sometimes there are unpredictable tipping points, as with fashion, in which some public figure or movement creates a critical mass, as in the switch from Mrs. and Miss to Ms. (though even here Google ngrams shows that Mrs. and Miss are going strong), and Black to African American. But it’s far tougher to change “functional” or “grammatical” or “closed-class” morphemes such as pronouns than it is to change common nouns; these small words are embedded with the grammatical infrastructure of a language, are acquired early, change slowly over history, and even may be represented in different parts of the brain.

Steve then looked up the usage of “Miss”, “Mrs.”, and “Ms.” over the last century by tracking usage among all Google books online. The figure gives the percentage of total words that fall into these three classes between 1900 and 2000.

I was surprised by this – not by the trend, which is common sense, but the fact that “Mrs.” and “Miss” are still going strong, and dominating “Miss.” Changing a pronoun would be orders of magnitude more difficult.

And he added this caveat:

The hits for the text string “Miss” could include other senses such as “Miss you!” and other instances in which it’s upper case.

This effort then, well intentioned as it is, is likely doomed to failure. However, readers should feel free to note below what they think of the recent push towards gender-neutral pronouns.