This is just a note to let readers know that Luke Dittrich’s critique of Eben Alexander’s “proof of heaven” experience (and book) is back online at Esquire, and is no longer behind a paywall. For a while you had to pay to see it, which, given its importance, was annoying.

You may recall that Dittrich wrote a devastating piece (“The Prophet”), showing that neurosurgeon Eben Alexander’s “visit to heaven,” which supposedly occurred when his brain was nonfunctional during a coma produced by bacterial meningitis, was deeply dubious, and that Alexander also had a history of shady behavior.  I wrote about Dittrich’s piece, and about Alexander’s undeserved acclaim, in January of last year.

Nevertheless, Alexander’s book, Proof of Heaven: A Neurosurgeon’s Journey into the Afterlife, was a huge success, topping the New York Times‘s bestseller list for months, and ultimately selling more than two million copies (that translates into several million dollars for the author). Despite the fact that the book was pure bunk, its sales are a prime example of religious confirmation bias: people love books about visiting Heaven because it confirms what they want to believe. (Take note: if people didn’t really believe in Heaven as an actual prize they’d win for living a pious life, they wouldn’t seek this kind of confirmation. So much for the notion that religious belief is a form of “quasifictional credence”—something that believers don’t really believe in the same way they believe that Paris is in France.) And now it looks as if Proof of Heaven will become a Universal Pictures movie.

I’ve gone on too long, but Dittrich’s piece, now free, is well worth reading, and a lesson in both the credulity of the public and the diligence of a reporter who seeks the truth as a ferret seeks a rabbit. It is a Professor Ceiling Cat Reading Recommendation.™

When rereading Dittrich’s piece, I came upon a subsequent (and short) piece he wrote giving his feelings about the “takedown”, a piece called “The Prophet, revisited.” Dittrich doesn’t want to be known as a debunker, but simply as a thorough reporter, and he said the following:

. . . The contours of the story I was working on were already clear. I’d already gathered more than a thousand pages of documents from four courts in two states, and had spoken with a host of Alexander’s former colleagues and friends. My reporting was beginning to make it pretty clear that Alexander’s bestselling book, Proof of Heaven, was a stew of factual inaccuracies, misrepresentations, and omissions. But that wedding gift, sitting there heavy as a brick, weighed on me. It was a reminder that Eben Alexander wasn’t just a character in a story. He was real. You could almost call him a family friend. And this article I was working on, well, it didn’t look like it was going to be a friendly one.

There’s no good way to resolve that sort of tension.

I could lean on a creaky old excuse: The ends justify the means. Over the past few millennia, many people have invested much faith and money in self-styled prophets who come bearing fresh revelations from God. When a new one emerges, shouldn’t his claims be subject to a rigorous fact-check, even if my grandfather knew his father?

In the end, though, I don’t claim to be a crusader, or even a debunker. I actually have very mixed feelings when people refer to this profile of Eben Alexander as a “takedown piece.” That implies a sort of gratuitous and single-minded intent that wasn’t there. To me, this profile isn’t all that different from other profiles I’ve done.

Which is to say, I piled up as much information as I could about the person I was profiling, then sifted through it, looking for the storyline hidden inside. In the case of Eben Alexander, it just happened to turn out that the most compelling storyline I found was the way the tale he’s been preaching doesn’t appear to match up with reality.

And that’s the case with all of these best-selling “I visited Heaven” stories. None of them have stood up to examination, and that’s beside the observation that different people describe Heaven in very different ways.

Other criticism of Alexander’s tale is documented on Wikipedia, including statements by Sam Harris as well as by the late Oliver Sacks, who wrote this in The Atlantic:

Alexander insists that his journey, which subjectively lasted for days, could not have occurred except while he was deep in coma. But we know from the experience of Tony Cicoria and many others, that a hallucinatory journey to the bright light and beyond, a full-blown NDE, can occur in 20 or 30 seconds, even though it seems to last much longer. Subjectively, during such a crisis, the very concept of time may seem variable or meaningless. The one most plausible hypothesis in Dr. Alexander’s case, then, is that his NDE occurred not during his coma, but as he was surfacing from the coma and his cortex was returning to full function. It is curious that he does not allow this obvious and natural explanation, but instead insists on a supernatural one.

To deny the possibility of any natural explanation for an NDE, as Dr. Alexander does, is more than unscientific — it is antiscientific. It precludes the scientific investigation of such states.

But, as they say, Alexander is crying all the way to the bank. 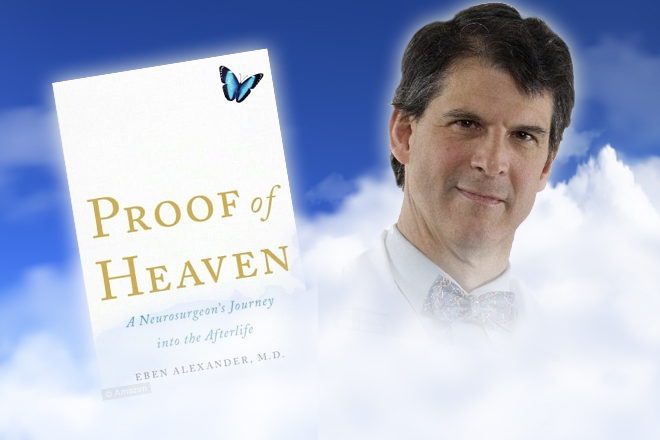 Finally, if you lack integrity, there’s a sure way to get rich. Simply engineer a near-death experience and then write a book that gives details about how you visited Heaven. If any topic guarantees a best-selling book, and lots of dosh, that one is it.