Today Professor Ceiling Cat is visiting a friend who owns a mansion in the Berkeley Hills, and I’m living in high style. Tomorrow I’m off for Mesa, Arizona to meet Kelly Houle (I’ll arrive on Monday a.m.), admire her artwork, and then pick up Ben Goren and drive to Kelly’s parents’ cabin in the mountains, where we’ll chill for a couple of days.

Yesterday, though, I was in nearby Oakland, the guest of biologist Sarah Crews (who studies spiders) and her partner Mark, who’s a photographer at Mother Jones magazine.  Since my drive from Davis was short (1.5 hours), I wasn’t tired at the end and we went for a walk by Lake Merritt. There were plenty of birds by the water, including pelicans, gulls, cormorants, egrets, and black-crowned night herons (Nycticorax nycticorax), one of which is here: 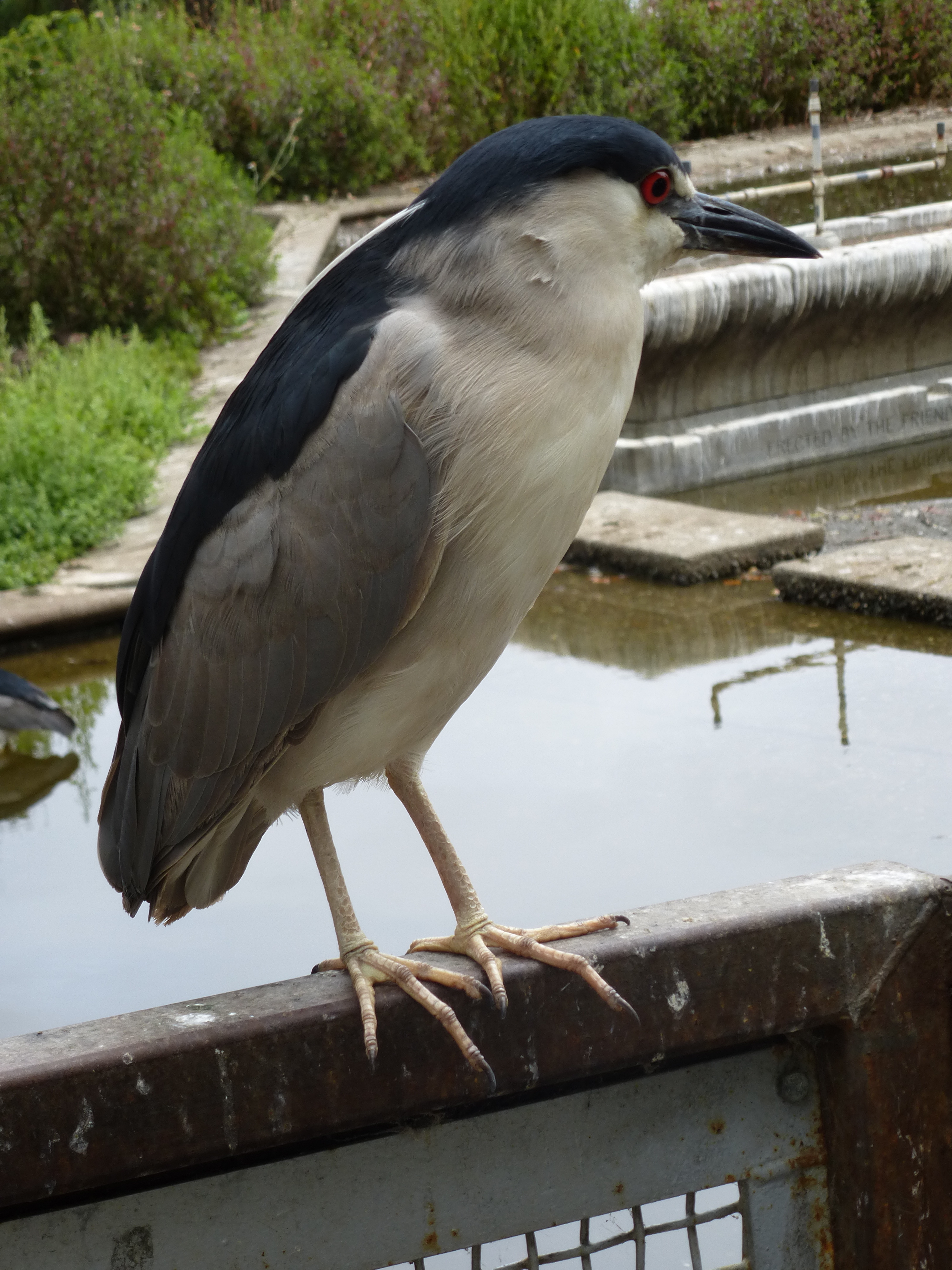 After our constitutional, we stopped by what is reputed to be the oldest bar in California, Heinold’s First and Last Chance Saloon, in business since 1883. The name comes from the fact that the bar was the last stop before the ferry to Alameda, a dry county, and also right at the port of Oakland, where sailors could get their first drink after a voyage, and the last before embarking.  Author Jack London hung out there and studied there during his one year at The University of California at Berkeley. In the bar, he heard tales of sailors and adventurers that he later worked into his fiction. Here’s a picture of London studying at the bar: 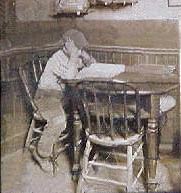 A bit more information about the place from Wikipedia:

Heinold’s is the last commercial establishment in California with its original gas lighting. The tables, which reportedly came from a whaling ship, and other furnishings date back to the days when Johnny Heinold ran the pub. The walls and ceilings are covered with business cards, hats of past patrons and money, often signed by sailors about to deploy so they would have money for a drink waiting for them upon their return.

The bar still holds the original potbellied stove used to warm the room, their only source of heat since 1889. Bob Fitzsimmon’s and Jimy Jeffries’ boxing gloves, John Heinold’s hat remain where they were hung; and the original bar glassware, and mahogany bar are still in use today.

One of the most notable characteristics of the pub is the very slanted floor. The uneven ground formed in 1906 during the great San Francisco earthquake when a portion of the piles the pub is built on in swampy ground sank. In the corner of Heinold’s is a clock that has been stopped since the moment of the 1906 quake, at 5:18.

Sadly, I didn’t read this before I visited the place, for I surely would have photographed the uneven floor, the stove, and the clock, but you can see photos at the Wikipedia article.  And outside the bar stands Jack London’s cabin, originally in the Yukon, and the place where he wrote “To Build a Fire” in the winter of 1897-1898. Half of the logs are original (the other half are in a duplicate in Dawson City, Canada; you can read how the cabin was identified, removed and relocated here. 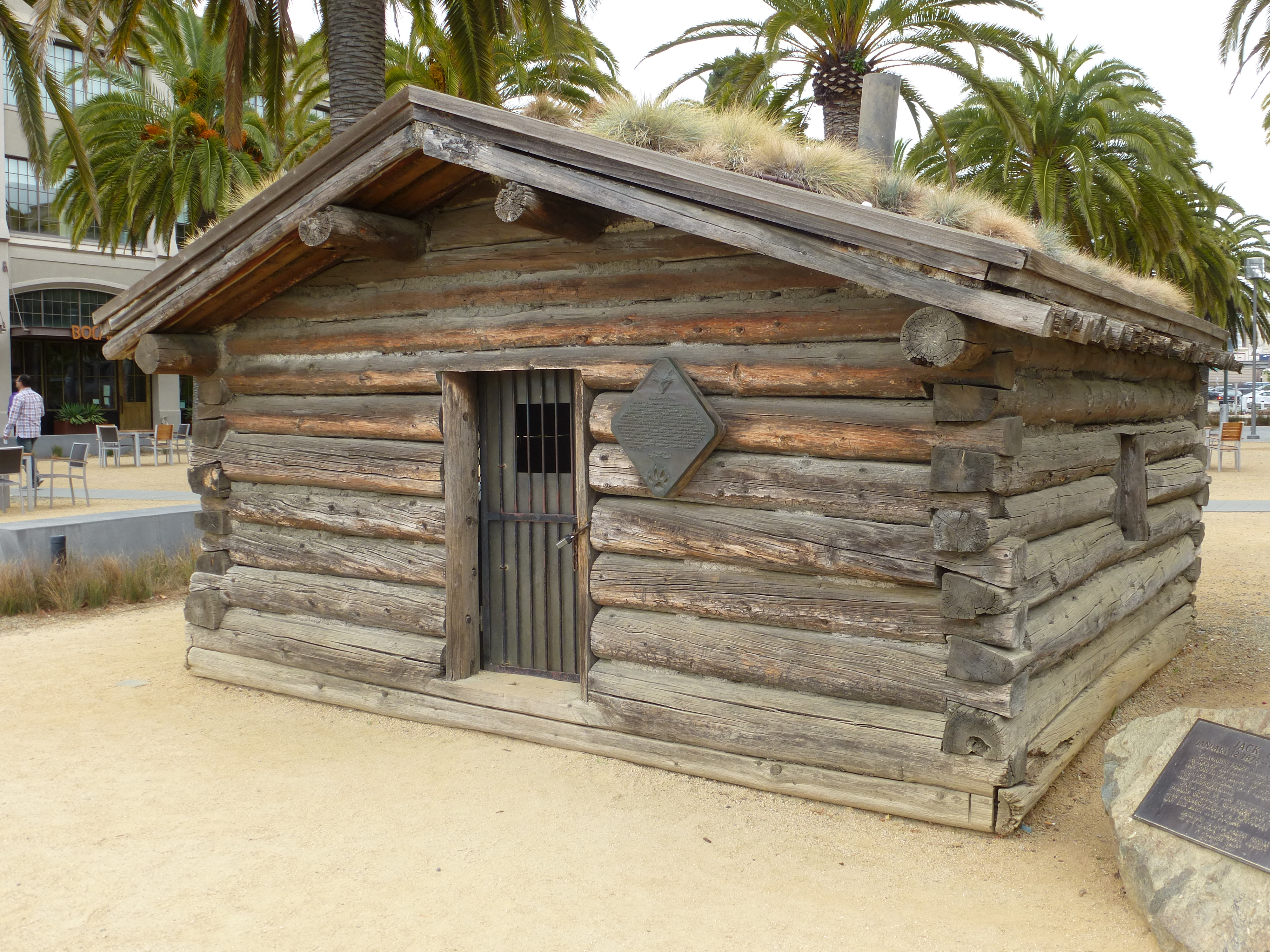 Two ducks frequent Heinold’s, and the bartender kindly provided them with water dishes and potato chips. The female mallard scarfed up an entire bag and then, thirsty, guzzled most of the dish of water. The male stood guard: 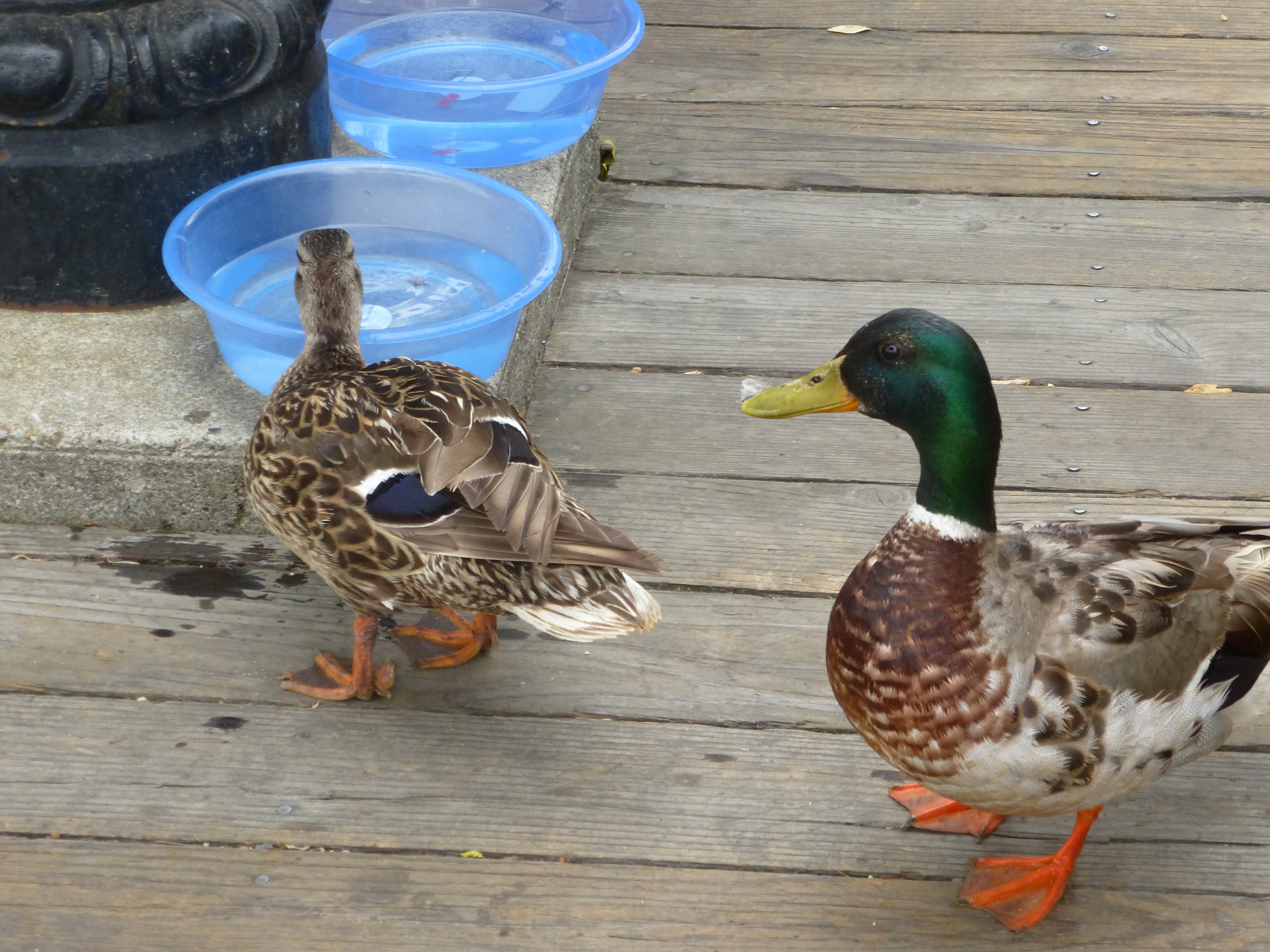 We then went to a local craft-cocktail bar, Fauna, to sample one of Sarah’s favorite cocktails (and one I never had) the Aviation, so called because of its sky-blue color. Made from gin, crème de violette liqueur, and maraschino liqueur, it packed a punch but went down easy. It’s an old cocktail, mostly forgotten, but I recommend it very highly when it’s made well. 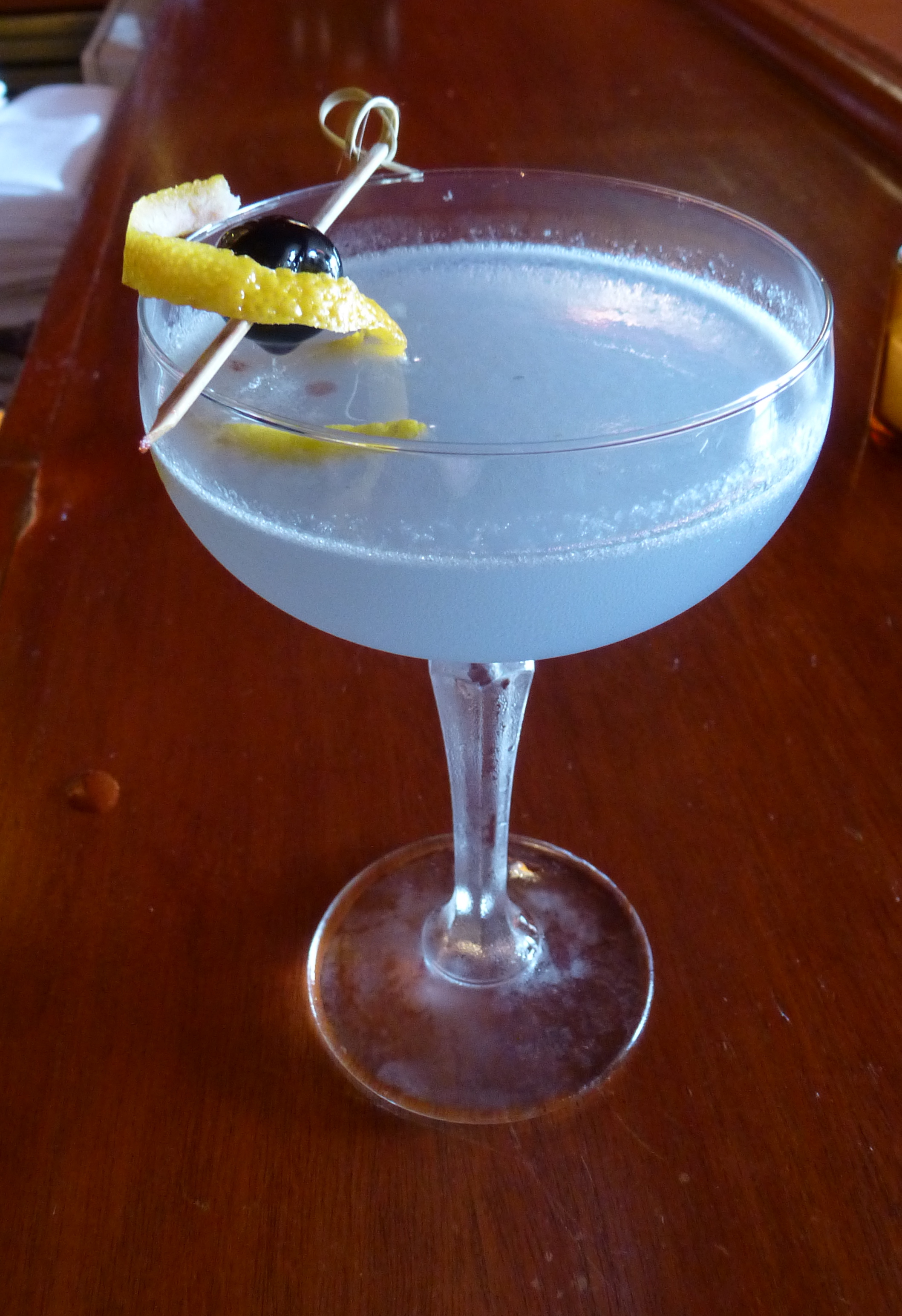 Sarah with an Aviation: 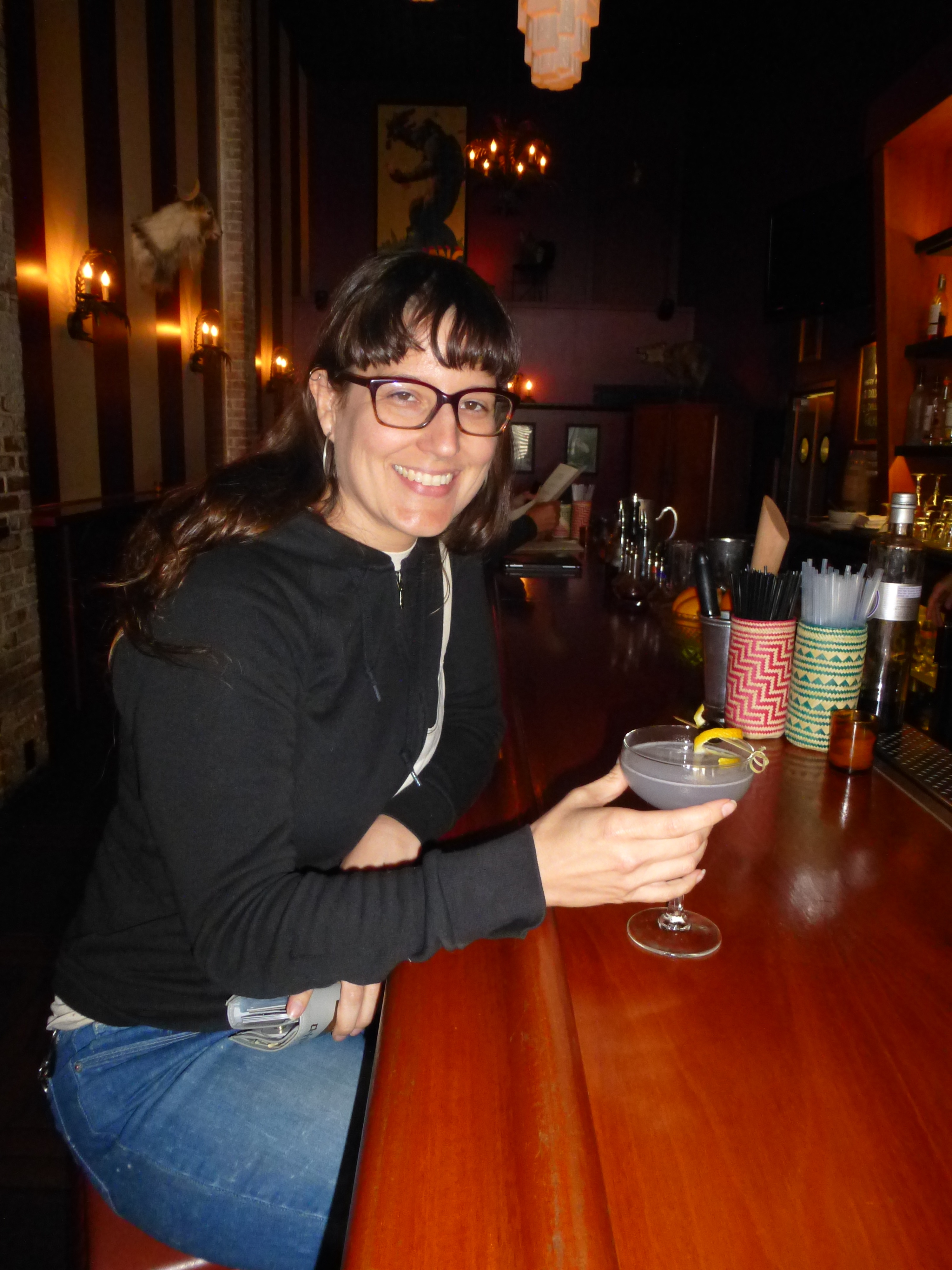 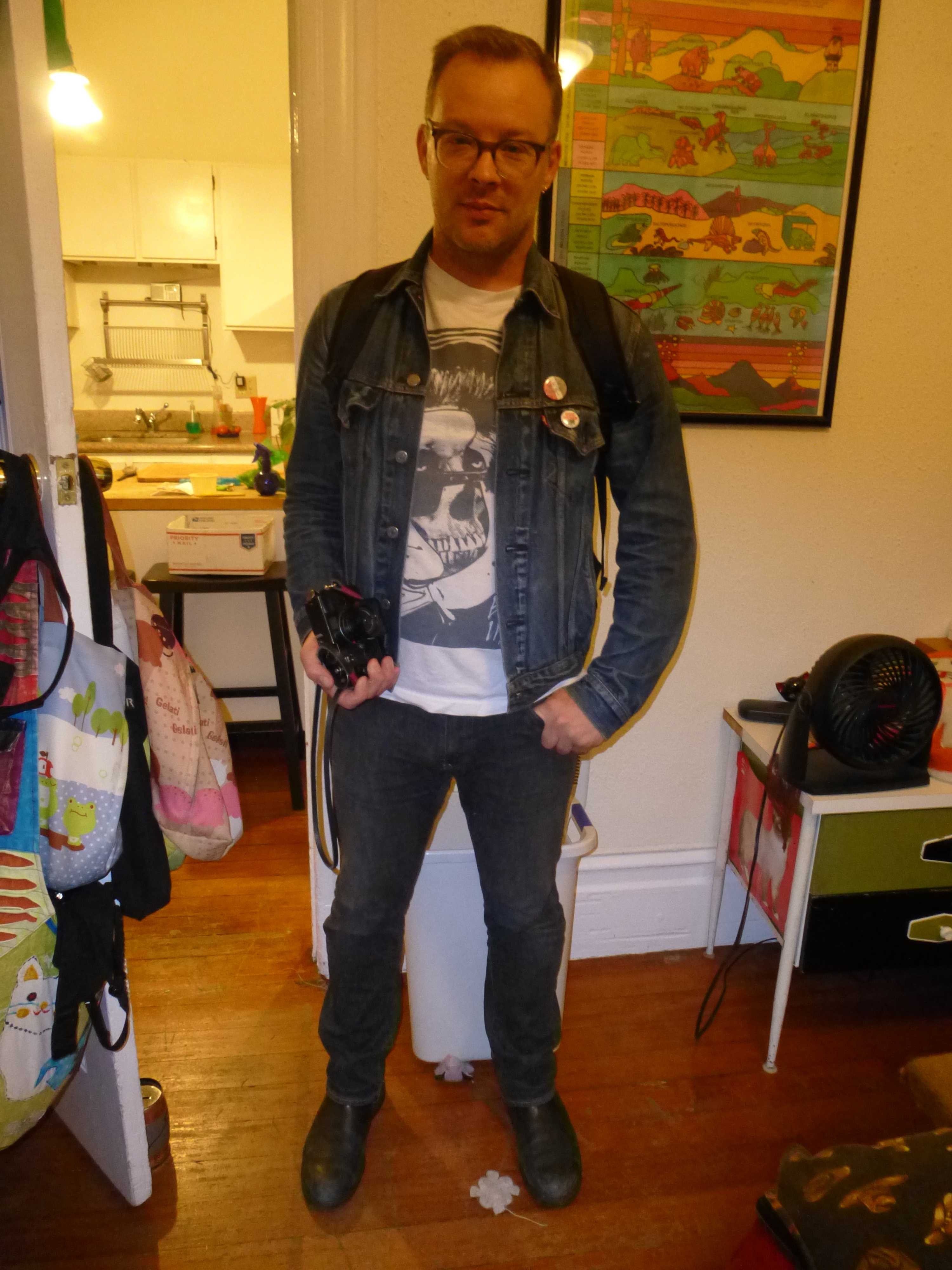 A nearby theater, the Fox Oakland, where they show movies and have concerts. Built in 1928, it retains the original Moorish design: 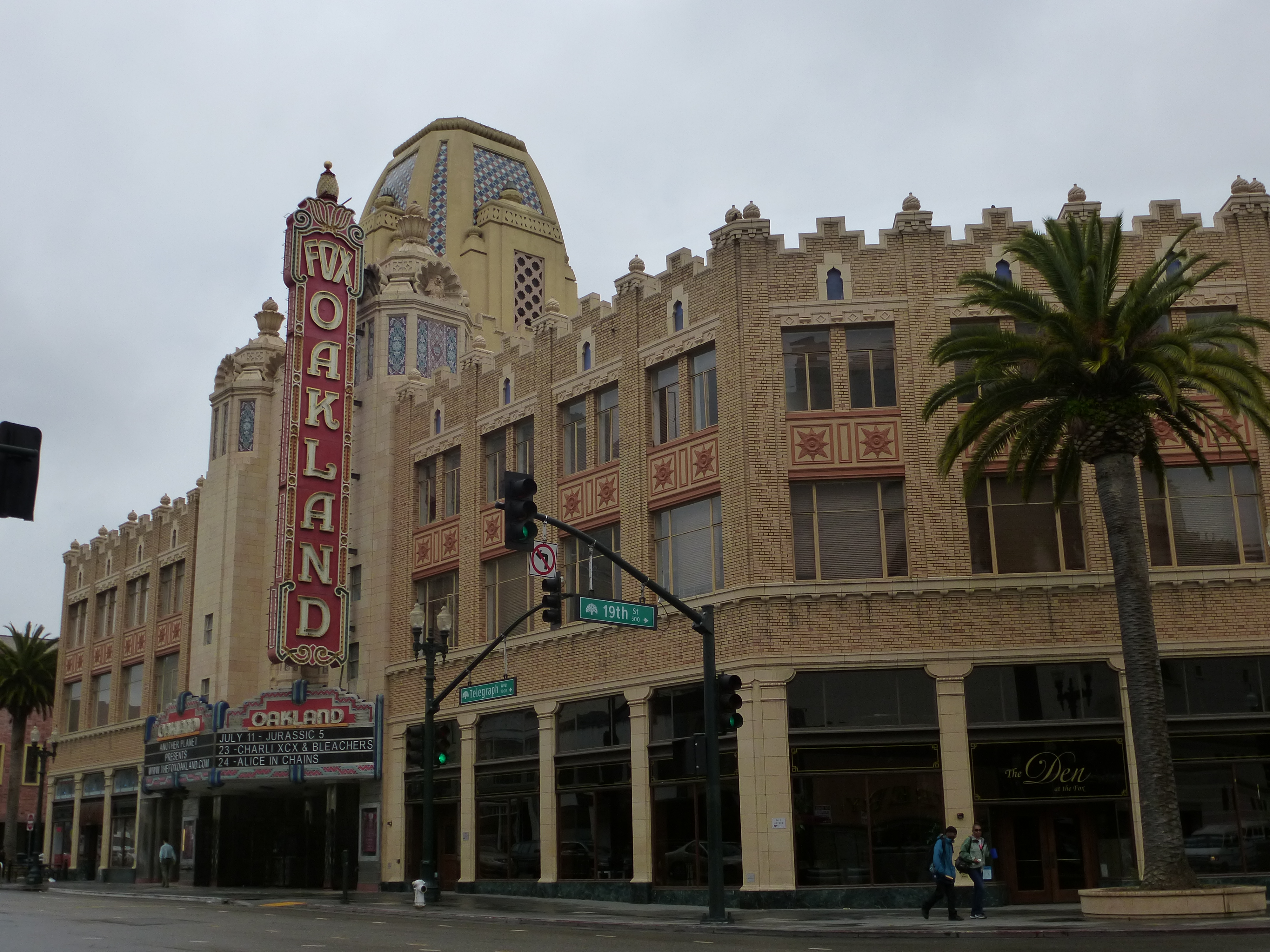 And now–the cats! These are part of the nine “core cats”, all ferals that adopted Sarah and Mark after they (the cats) were trapped, neutered, and released (their ears are cut when to indicate that the cats have been so treated). But Sarah and Mark feed other cats as well:

Buster (the largest cat and a sweetheart): 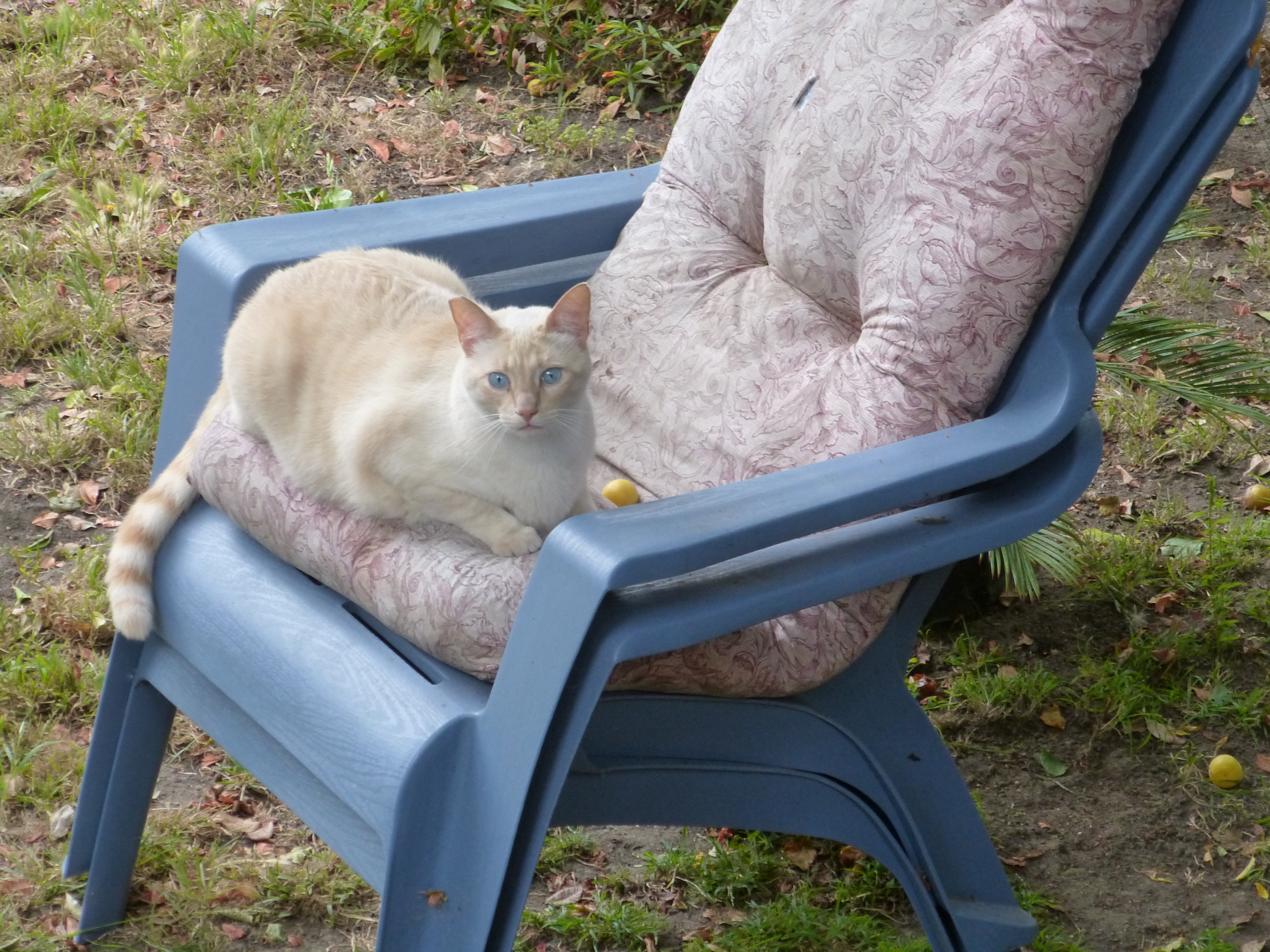 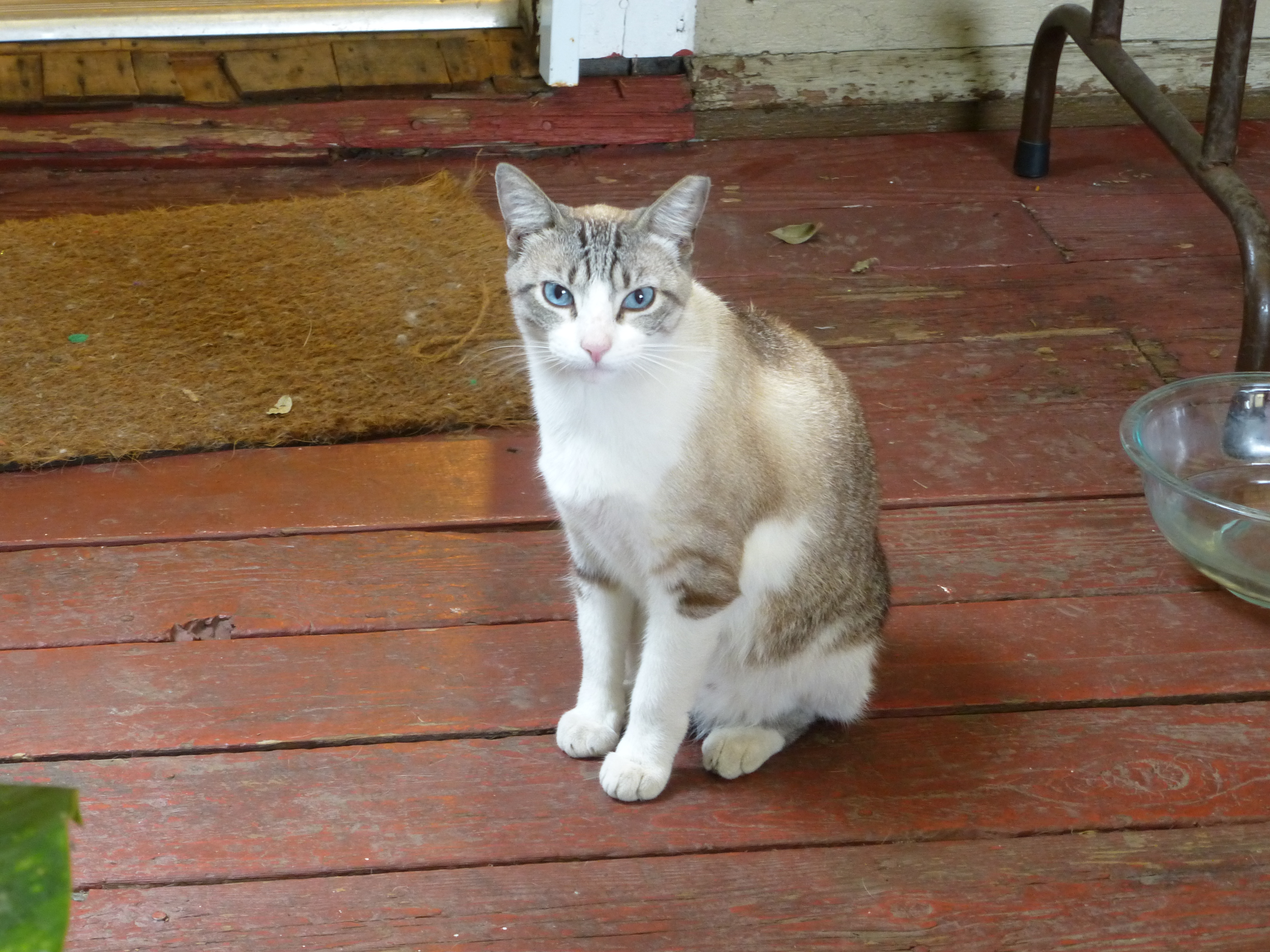 The lovely Lisette, who lost her rhinestone-studded collar: 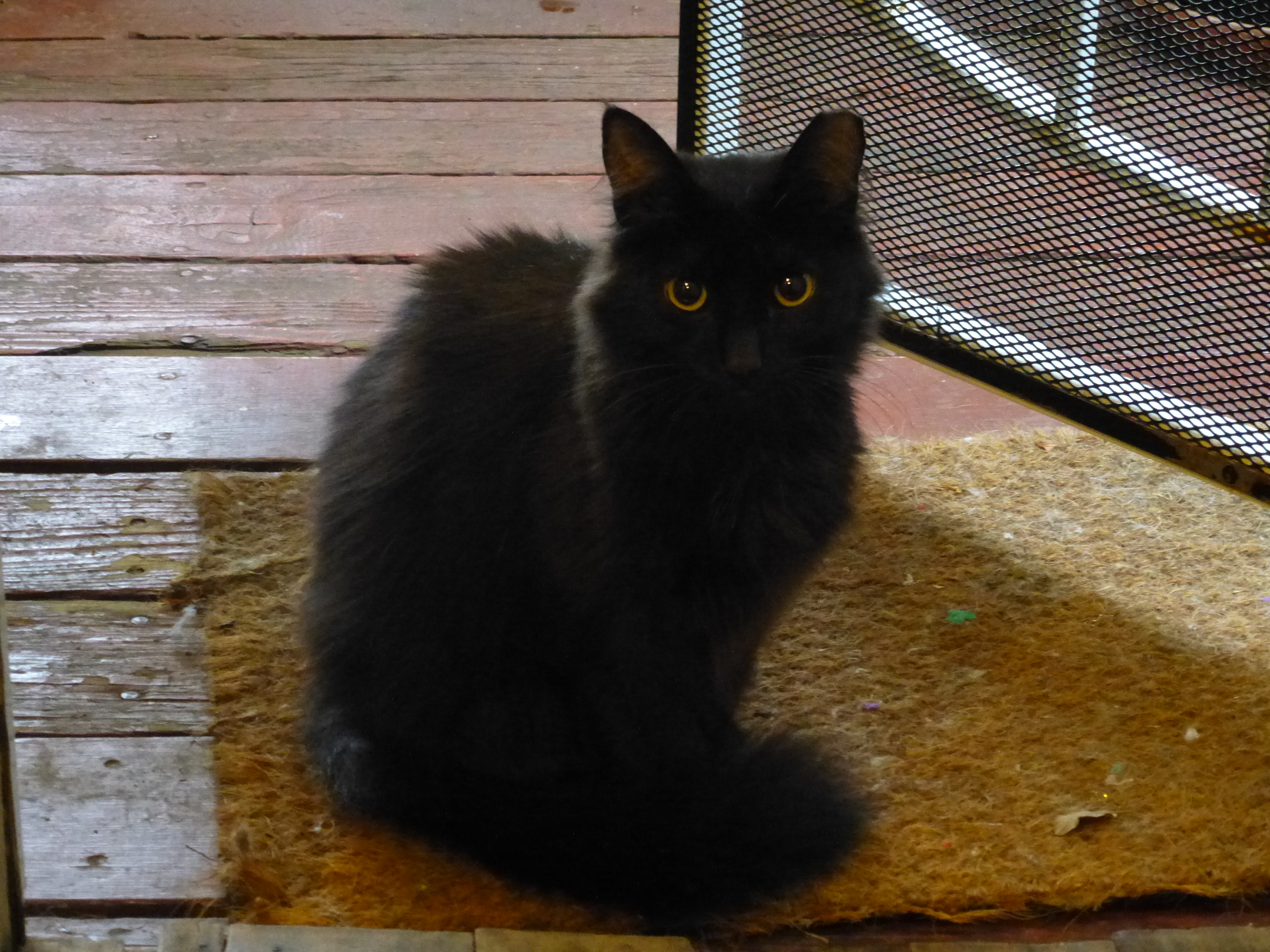 Professor Swatty (below: so called because he swats everyone and every other cat) and two students: 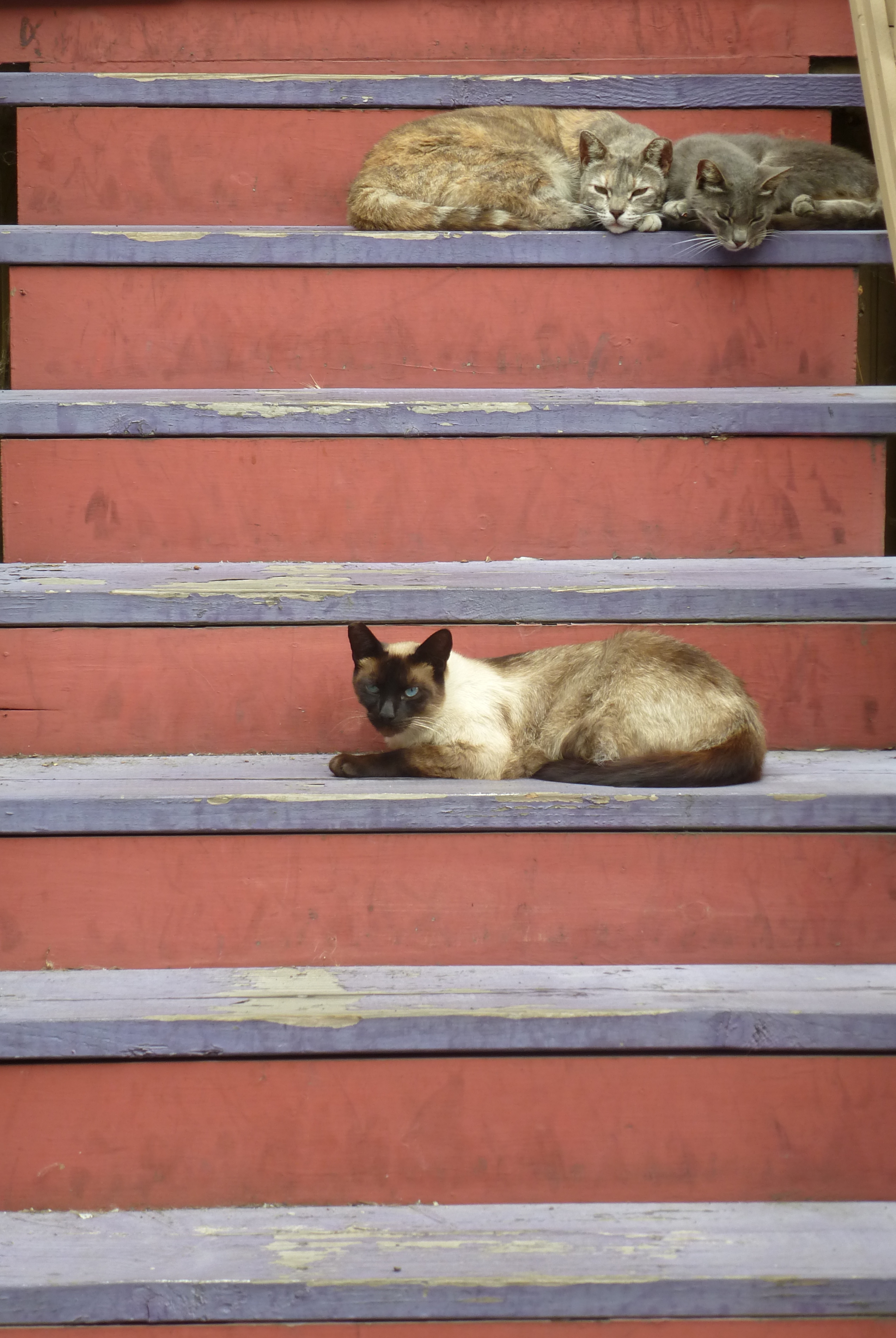 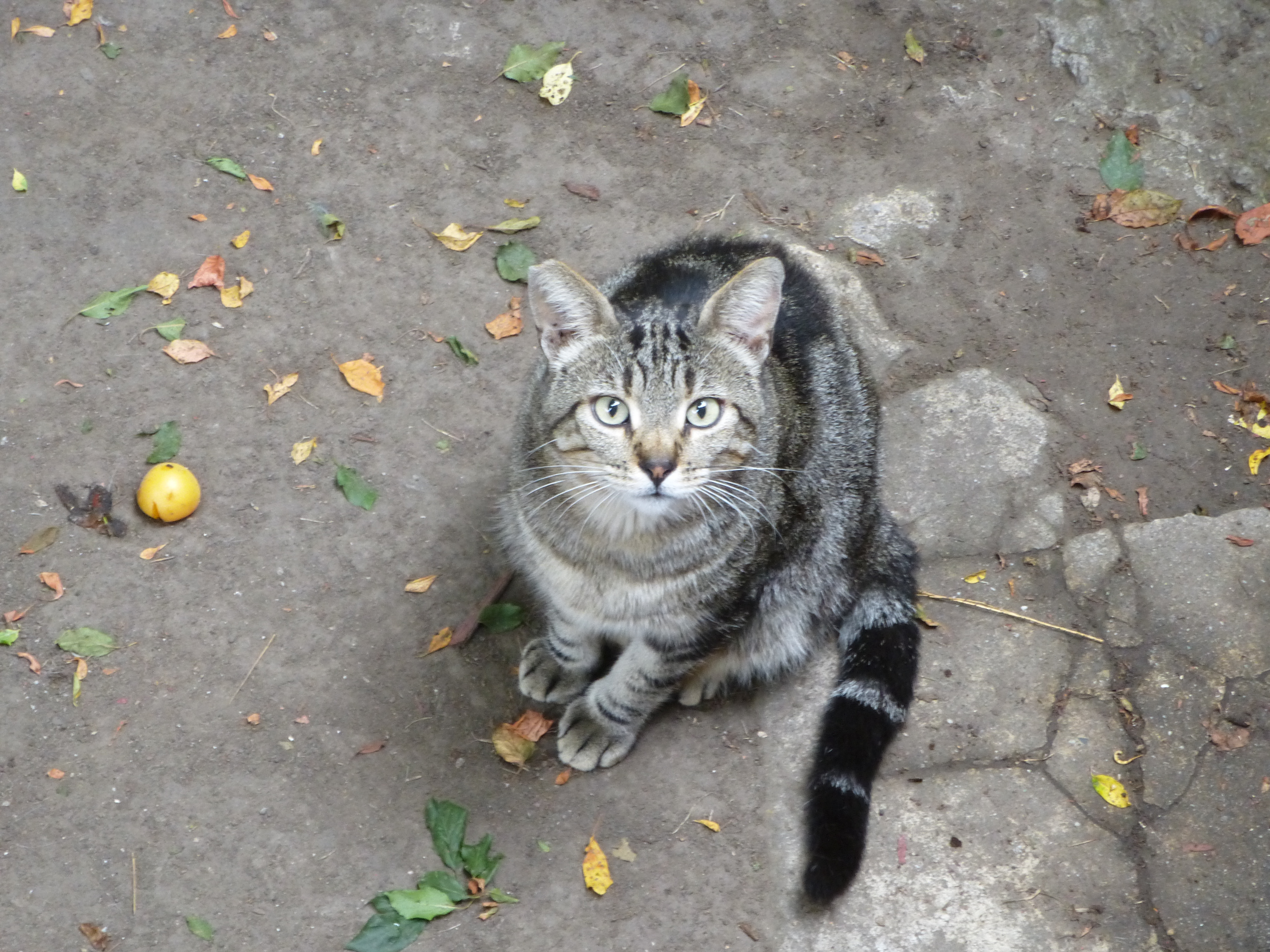 Sauron (foreground) and Surprise, Cat!, so called because he always looks surprised: 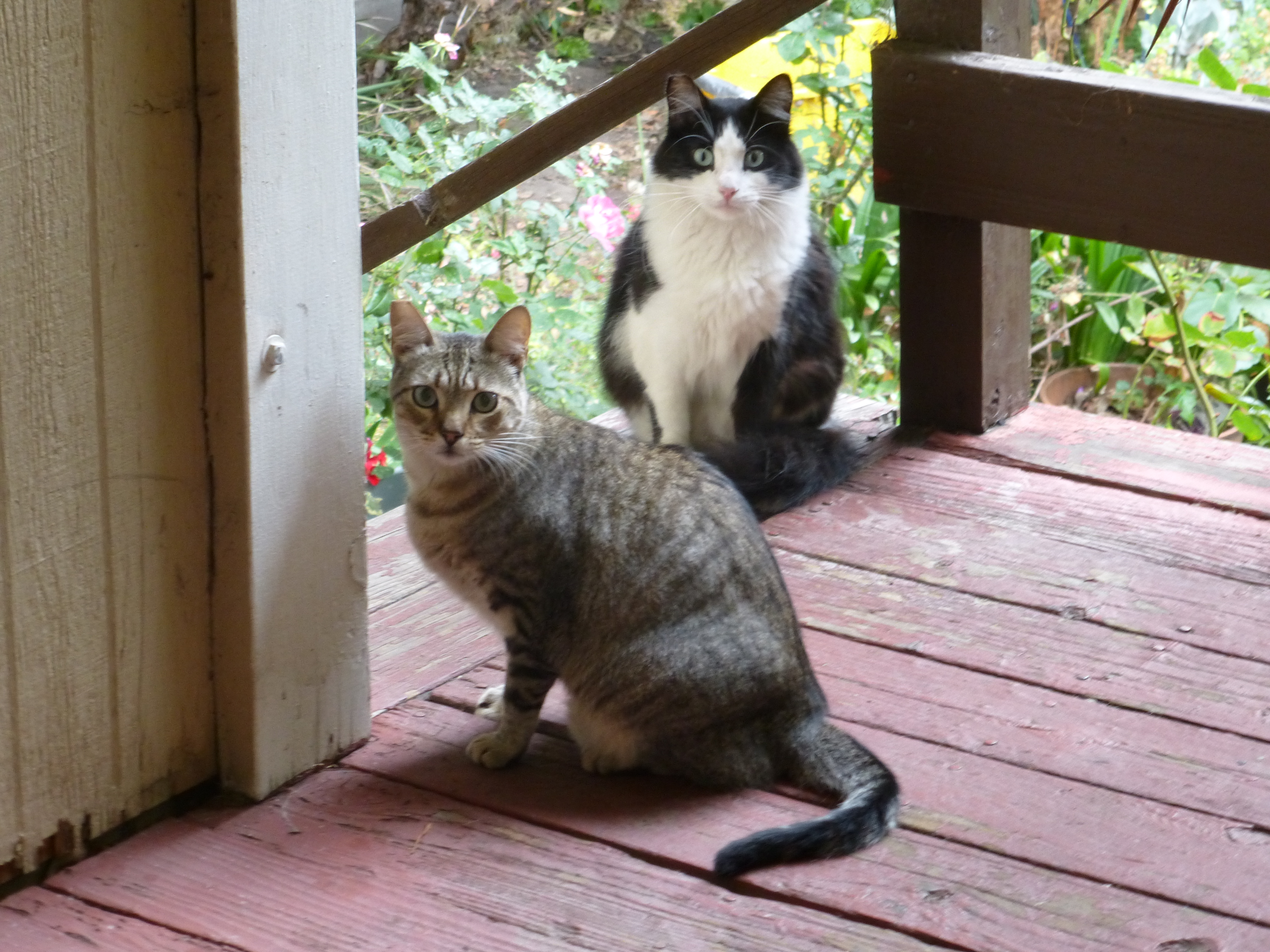 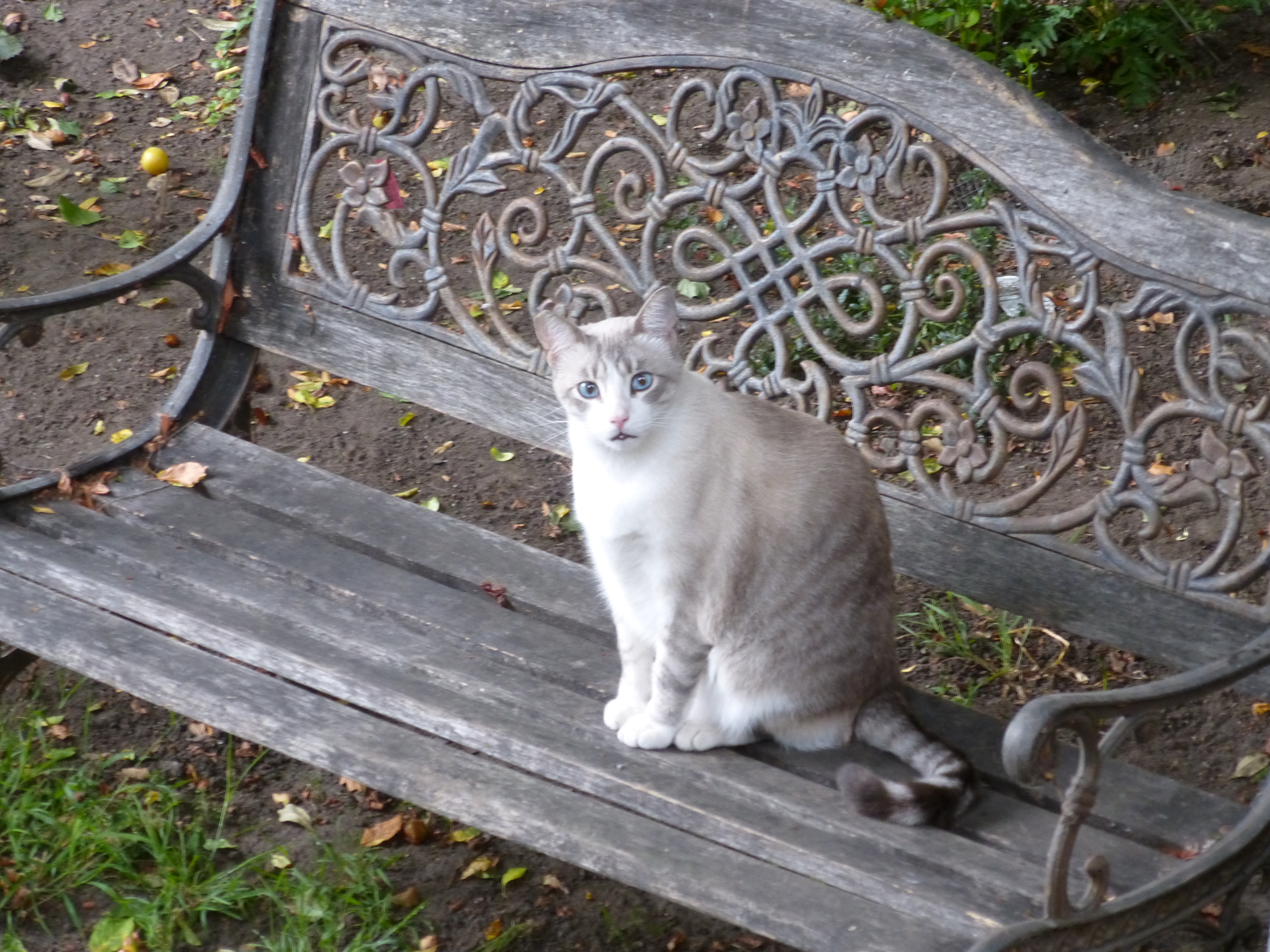 Surprise, Cat! Notice the permanent look of surprise on his face. He also has the longest whiskers I’ve seen on any cat: 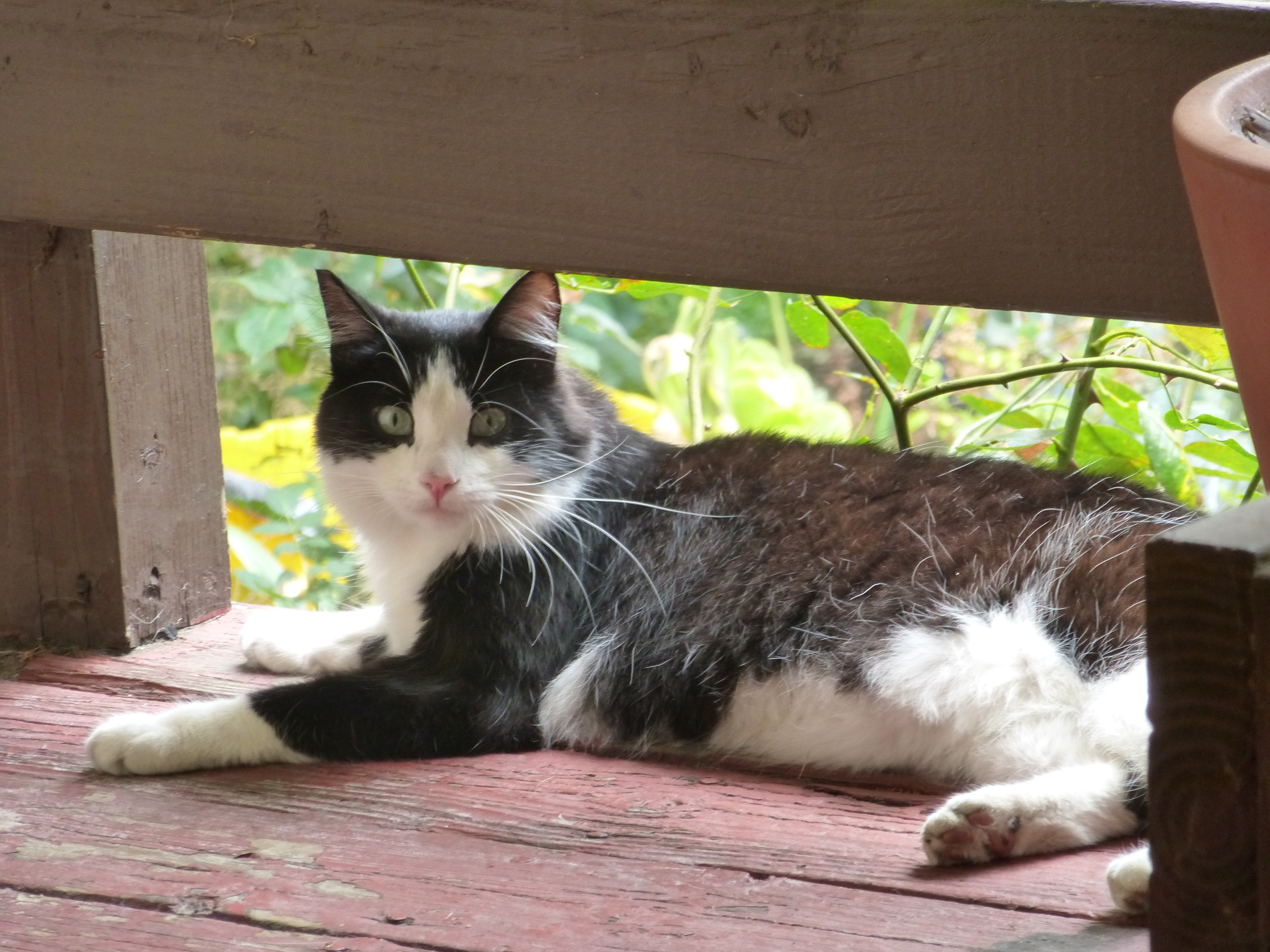 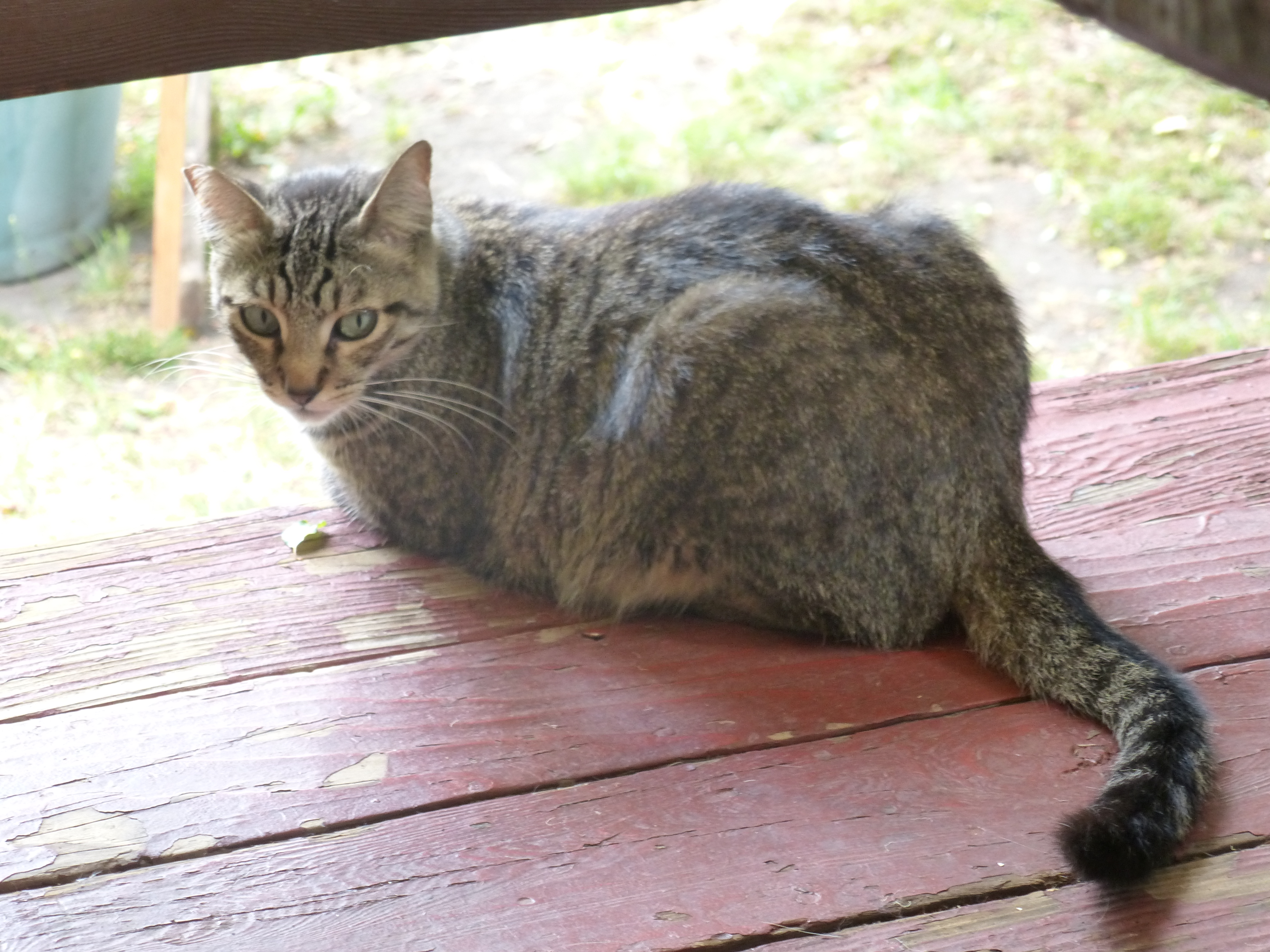 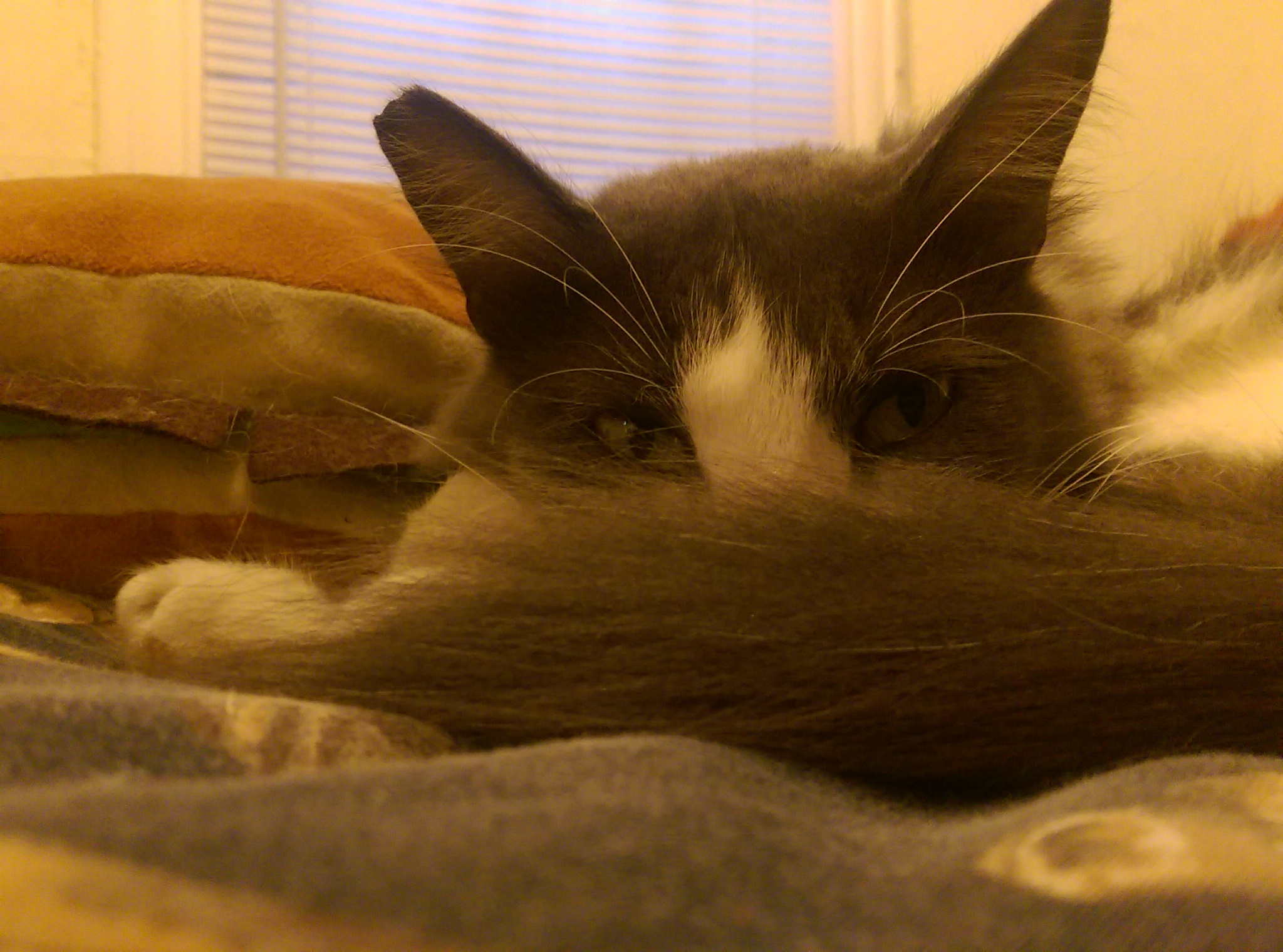 Finally, a reader challenged me to get all nine cats in one picture. I couldn’t do that (most of them were scared of me), but Sarah provided a photo of eight of them on the bed. Imagine trying to sleep among this menagerie! 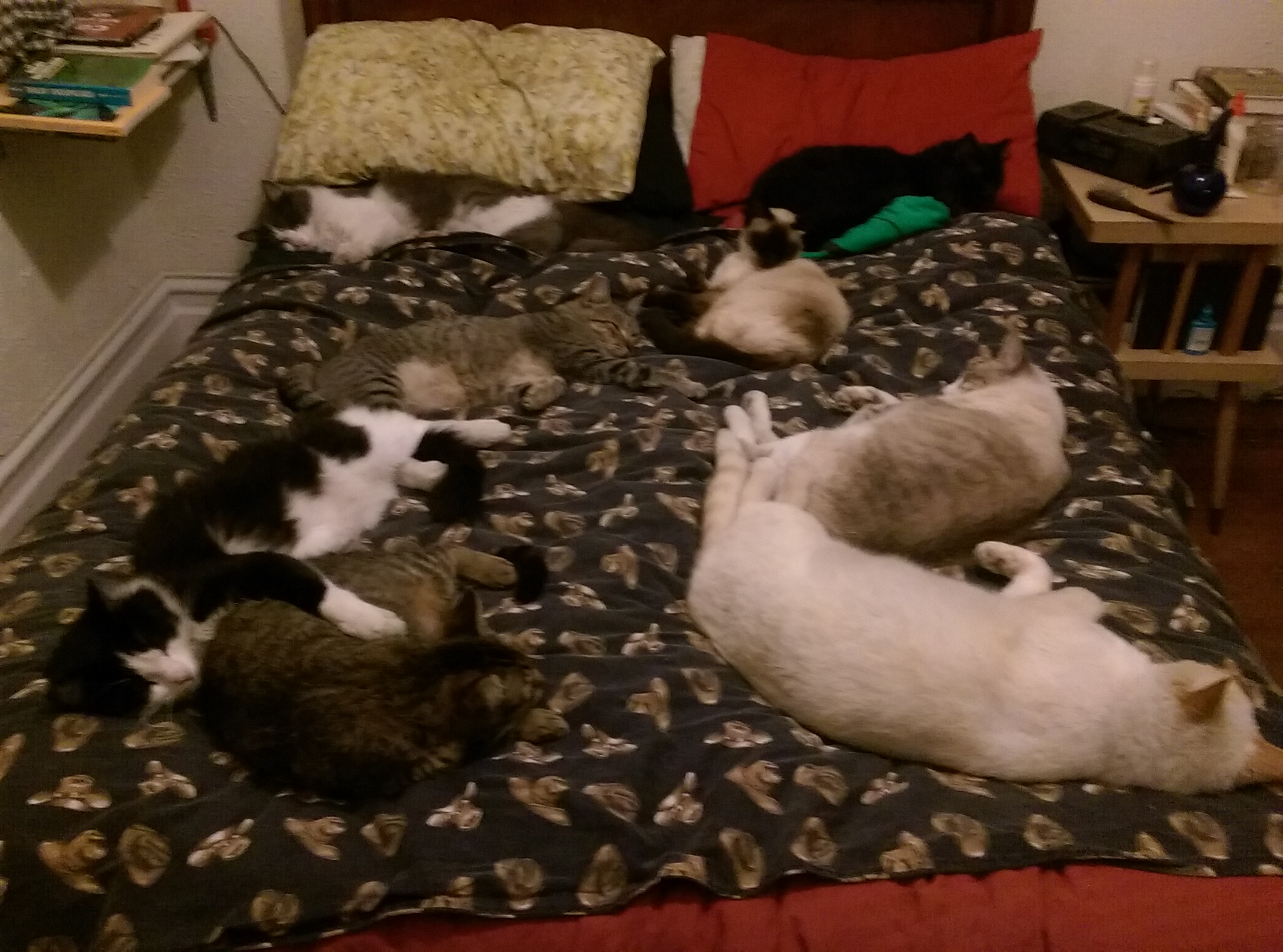 Thanks to Sarah and Mark for hosting me, introducing them to the moggies, and providing a tour and a homemade Key lime pie!