Tuesday I spent a nice day in Colorado Springs with reader Stephen Q. Muth, who happens to own Butter, a flame-point Himalayan rescue cat whom we featured before (be sure to click the link). They are very close, and indeed, Butter, who looks like the epitome of a curmudgeonly cat, is a very sweet and affectionate animal. So let me start with a few pictures of Stephen and Butter:

Butter getting fusses: despite his expression, he really does enjoy them! 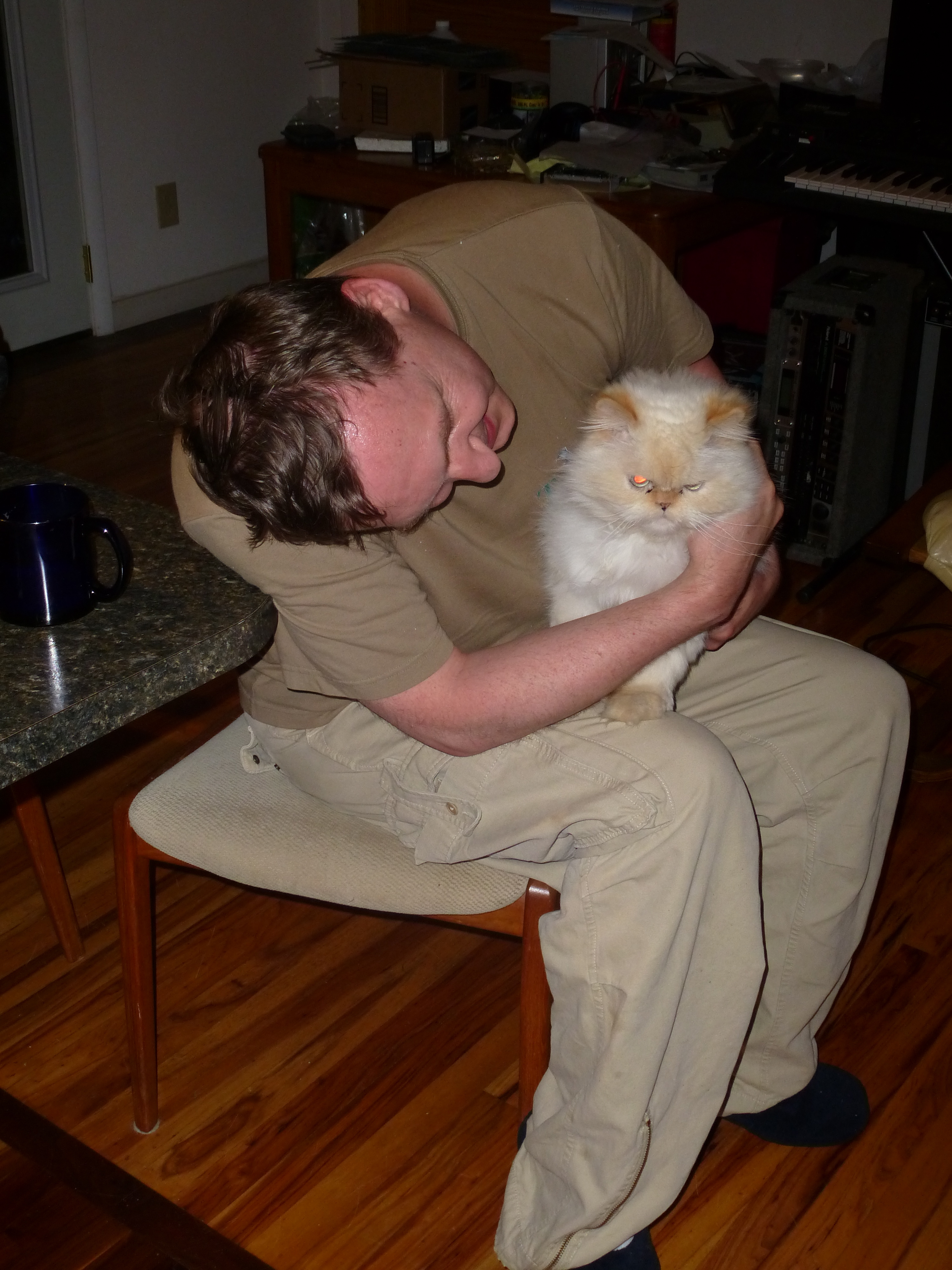 Butter having a nap. He always looks either affronted or ticked off. 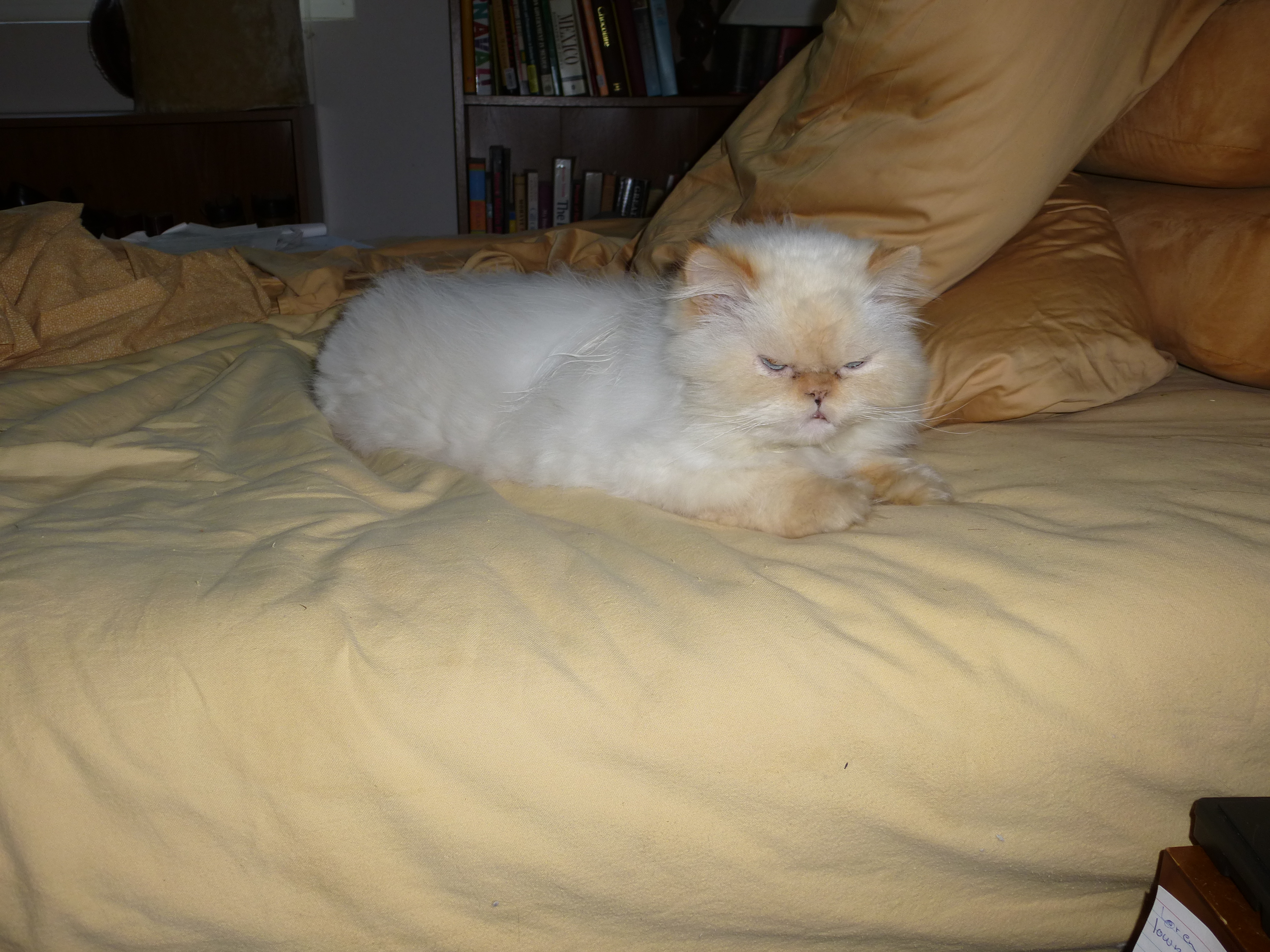 Butter doesn’t get to go outside but he sits at the screened front door and gazes out: 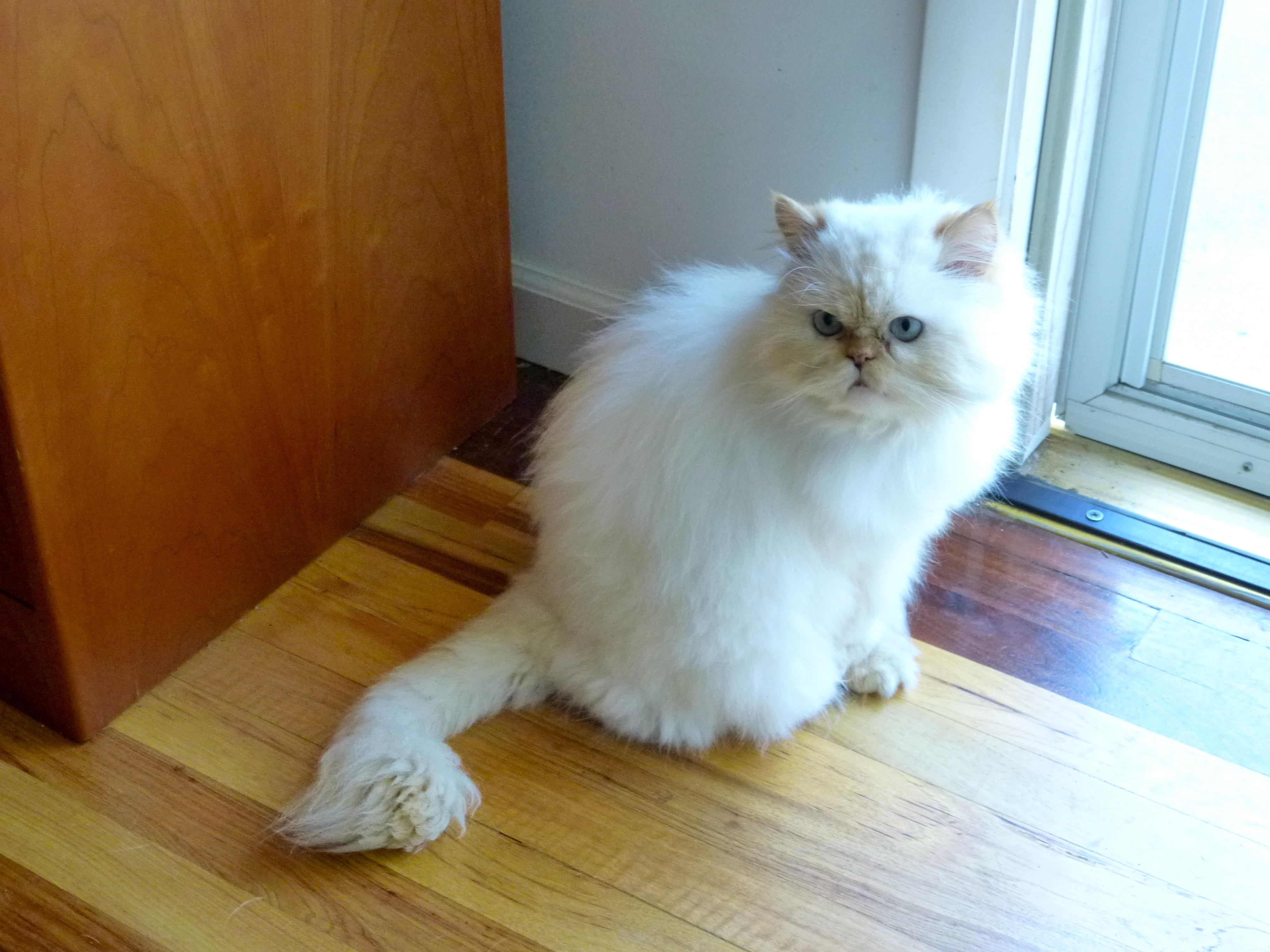 And sometimes he looks diabolical: 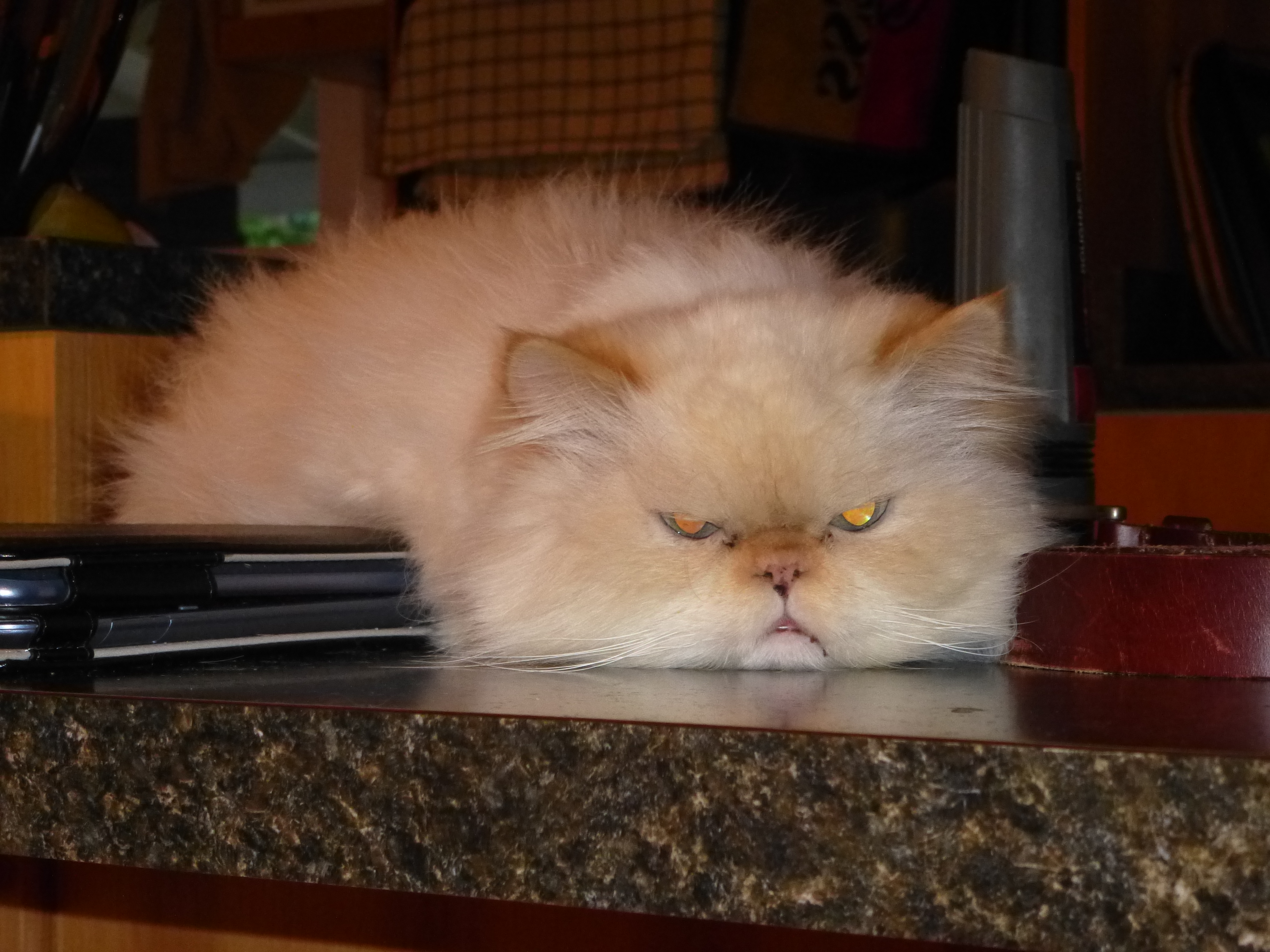 Stephen has a collection of art objects that someone sent him for safekeeping. Here’s he’s holding what is said to be a piece of Saddam Hussein’s palace after it was ransacked. He uses the decoration as a doorstop. 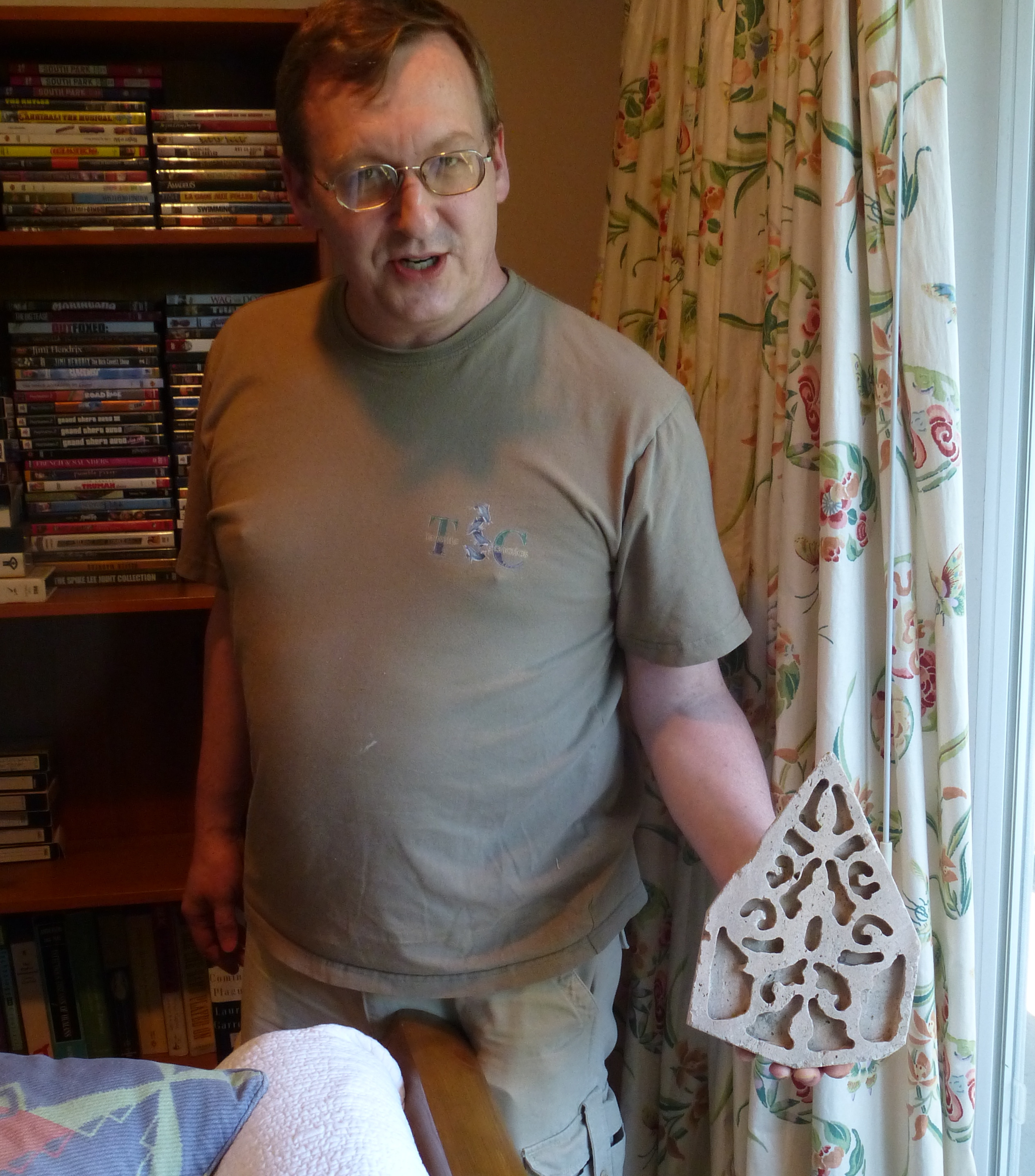 I put up the following three photos so that readers might help identify this object. It’s an old print, and clearly a print from Albrecht Dürer, as the “AD” signature at top left clearly shows. I’m not sure how old the print is, or whether it has any value, but I added the printer’s notation and embossing below it so that any readers with art expertise could tell us something about it: 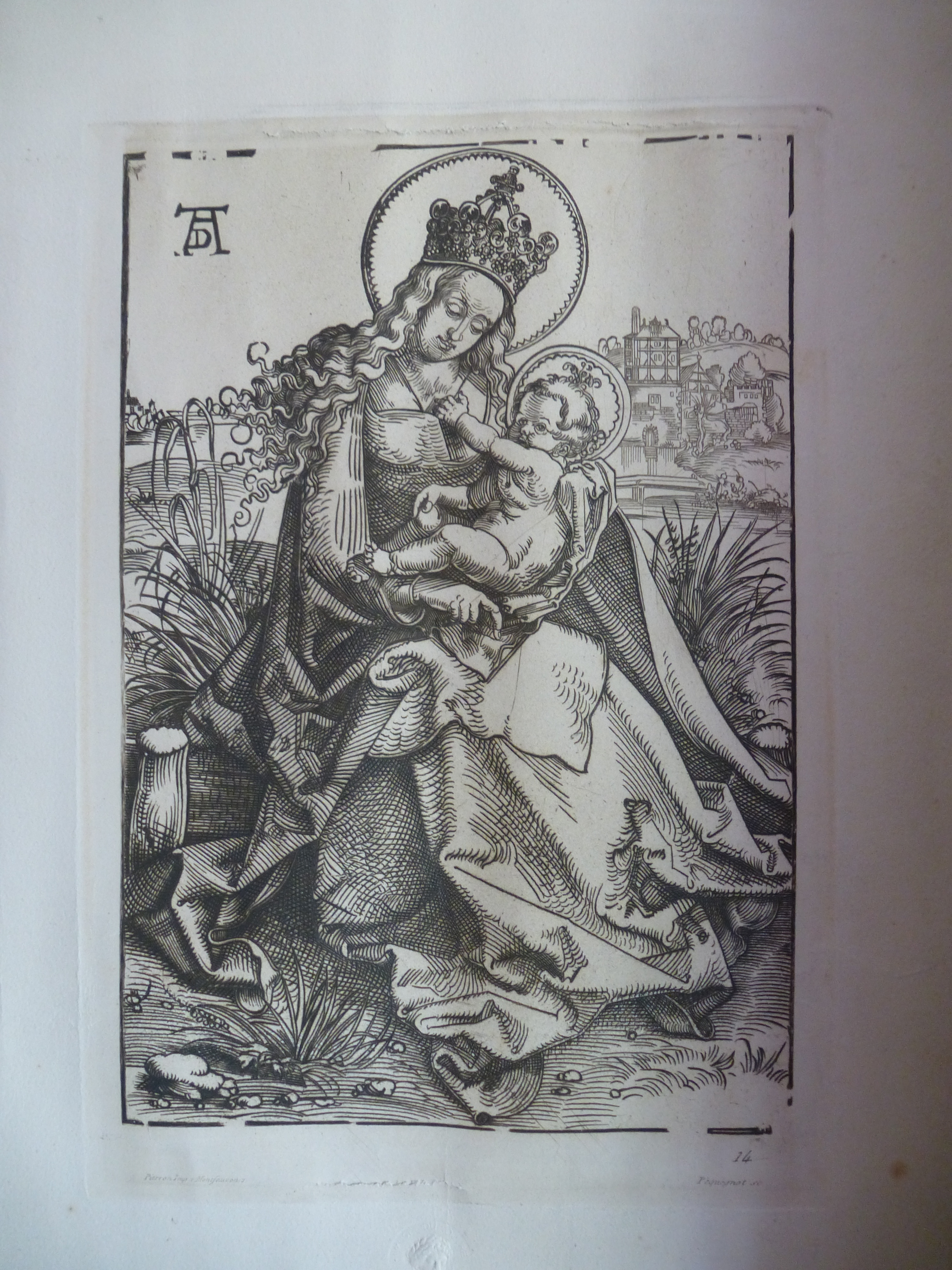 Bottom right of the print, clearly showing a French origin: 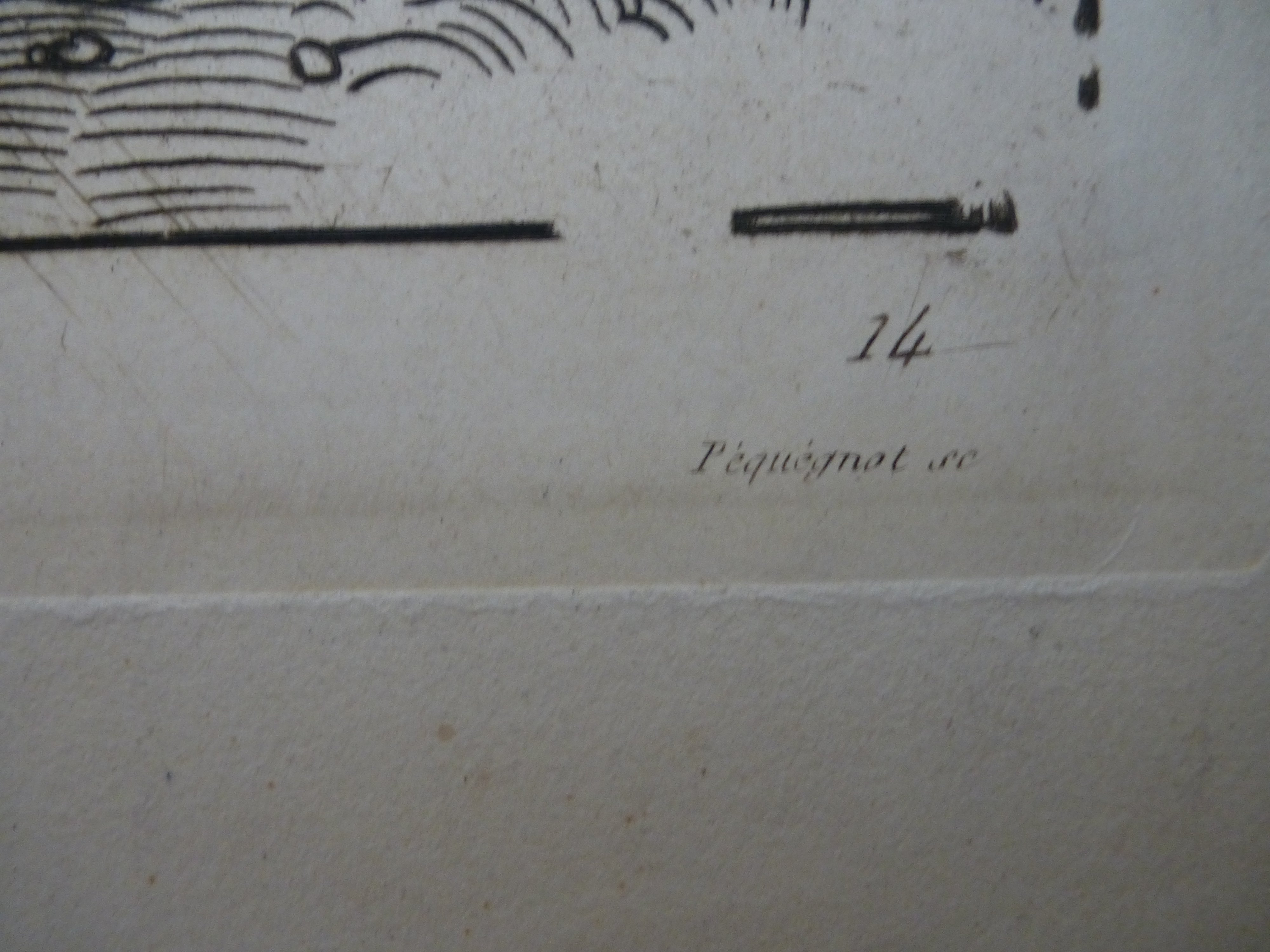 The embossing on the paper, which implies it was produced by a French museum. Perhaps it’s just a largely worthless reproduction, but I’m not sure: 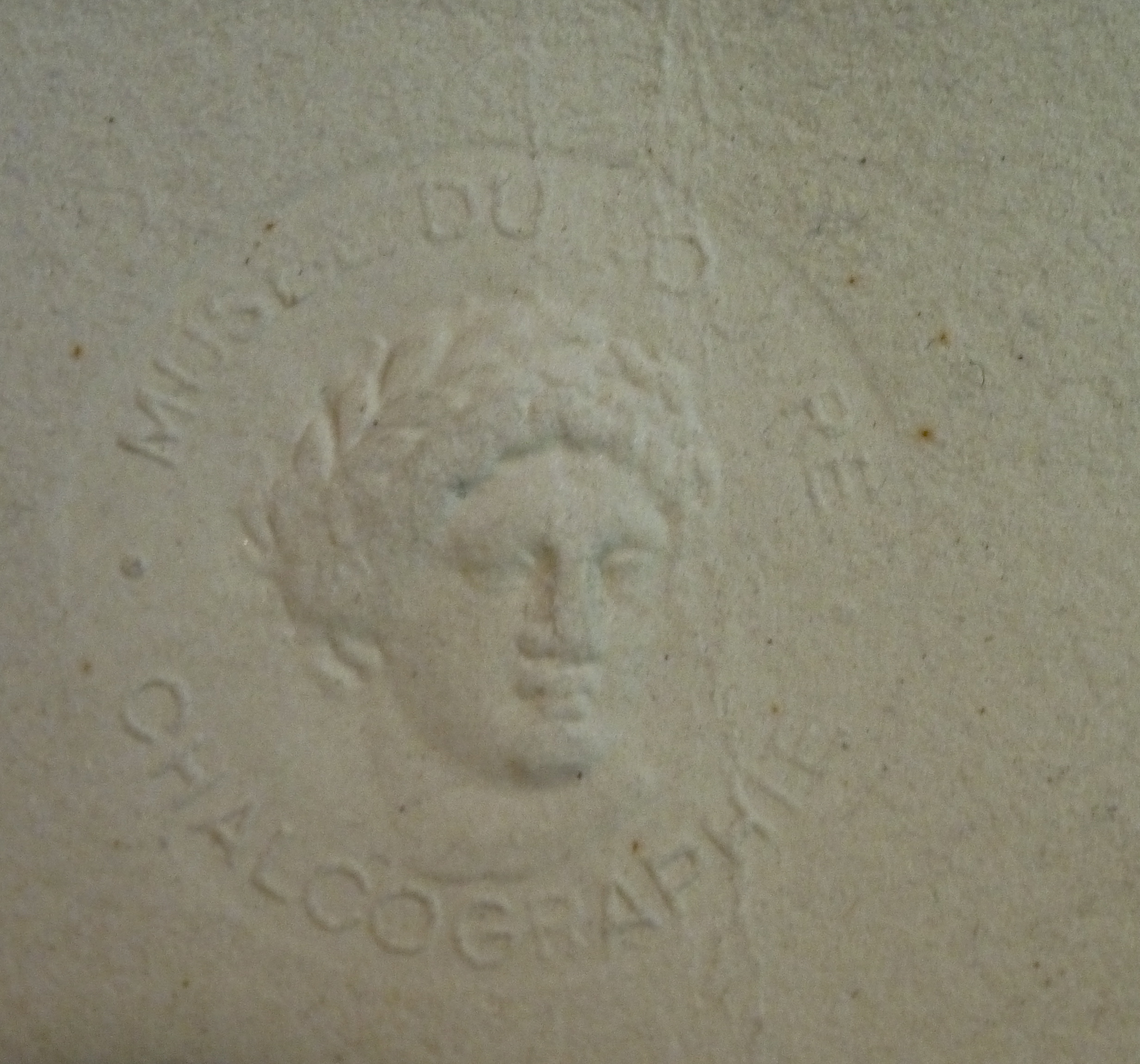 We headed downtown for lunch. Along the way you get this view of the famous Pike’s Peak  (el. 14,115 feet or 4,302 meters), with the main street running right toward it. This was done deliberately when the city was laid out. You can take the expensive cog railway up to the top, or even drive to the summit. The descent by car has ruined many a person’s brakes. 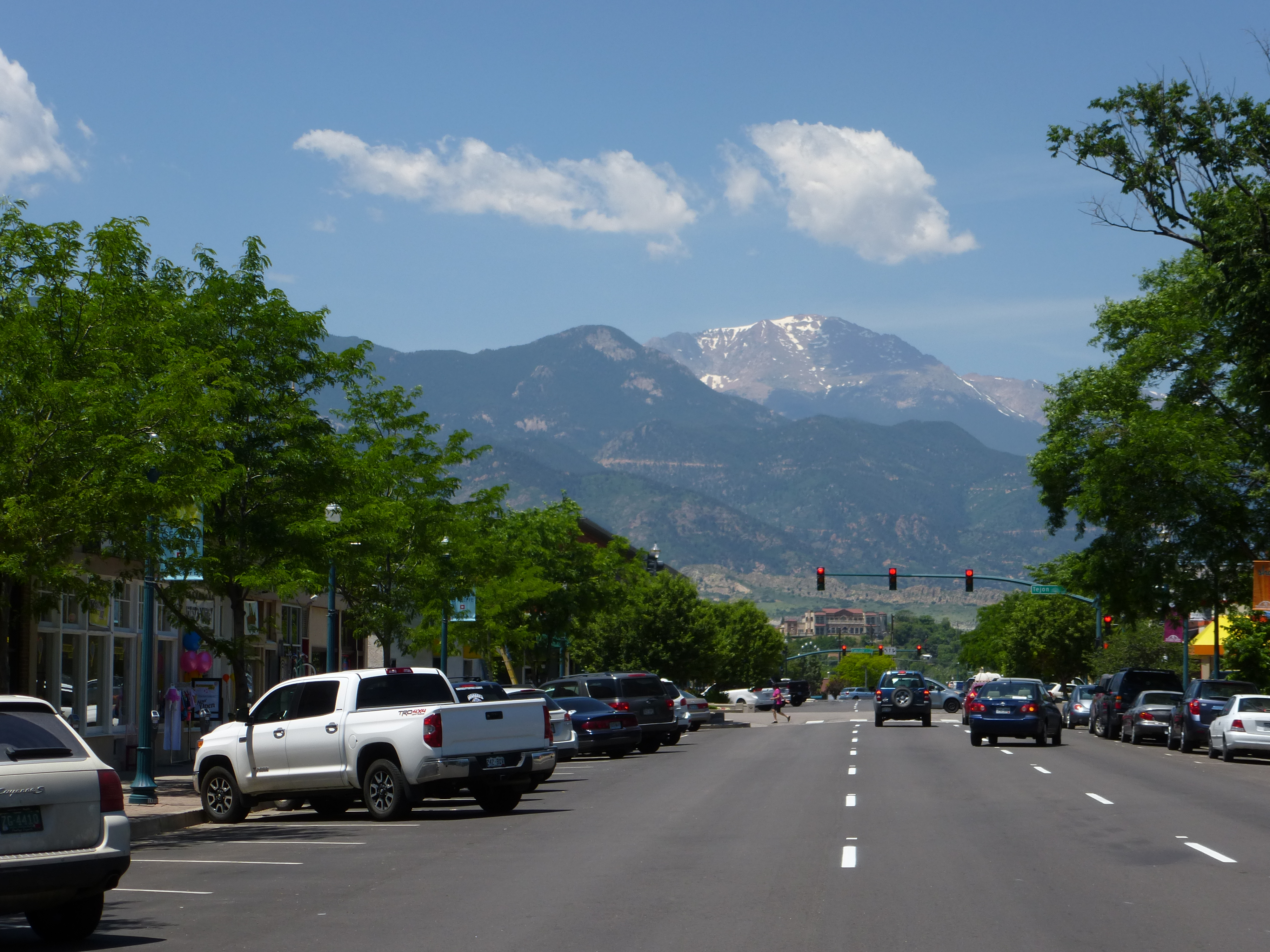 Lunch: a delicious green chile cheesburger at a local diner. The two burger patties are topped with a slew of chile-laden meat stew and cheese: 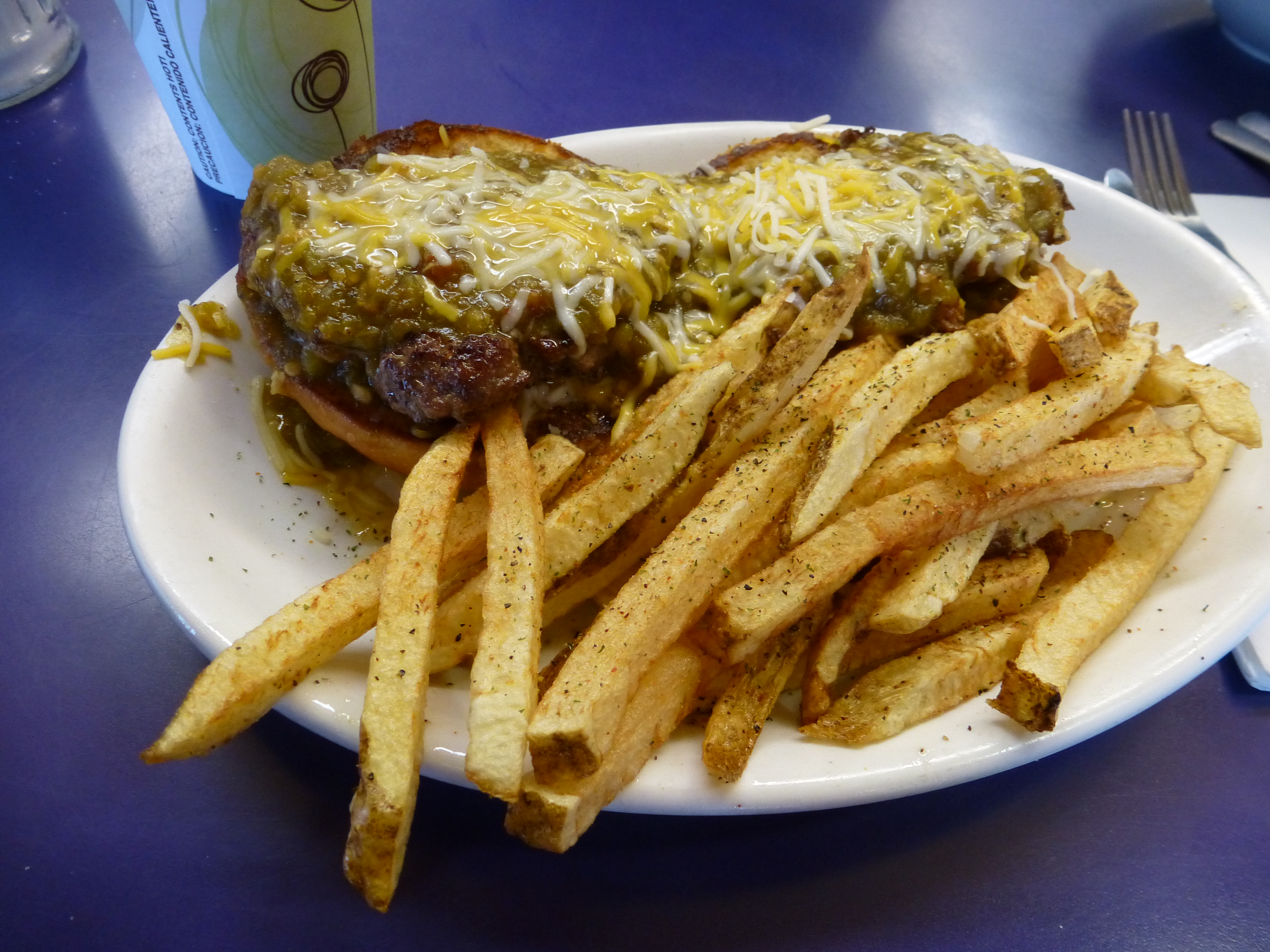 We then visited Manitou Springs, a touristy area adjacent to Colorado Springs, where one can (for $75!) take the cog railway up to the top of Pike’s Peak. The springs aren’t really really a spa, but a pool of underground water that can be tapped, and comes out of drinking fountains like the one below.  The water is truly delicious: slightly carbonated and full of minerals like calcium. We filled a bottle and sipped on it throughout the day, but many people come and fill gallon jugs with the stuff.

Manitou Springs is now completely overrun with kitschy stores, ice-cream stands, pizza joints, and even a hemp store where you can buy “marijuana” shirts, but the one good feature of the town is an old arcade with the kind of mechanical games and pinball machines that we had when I was a kid. I didn’t photograph it, but it’s a trip back in time, and well worth visiting. 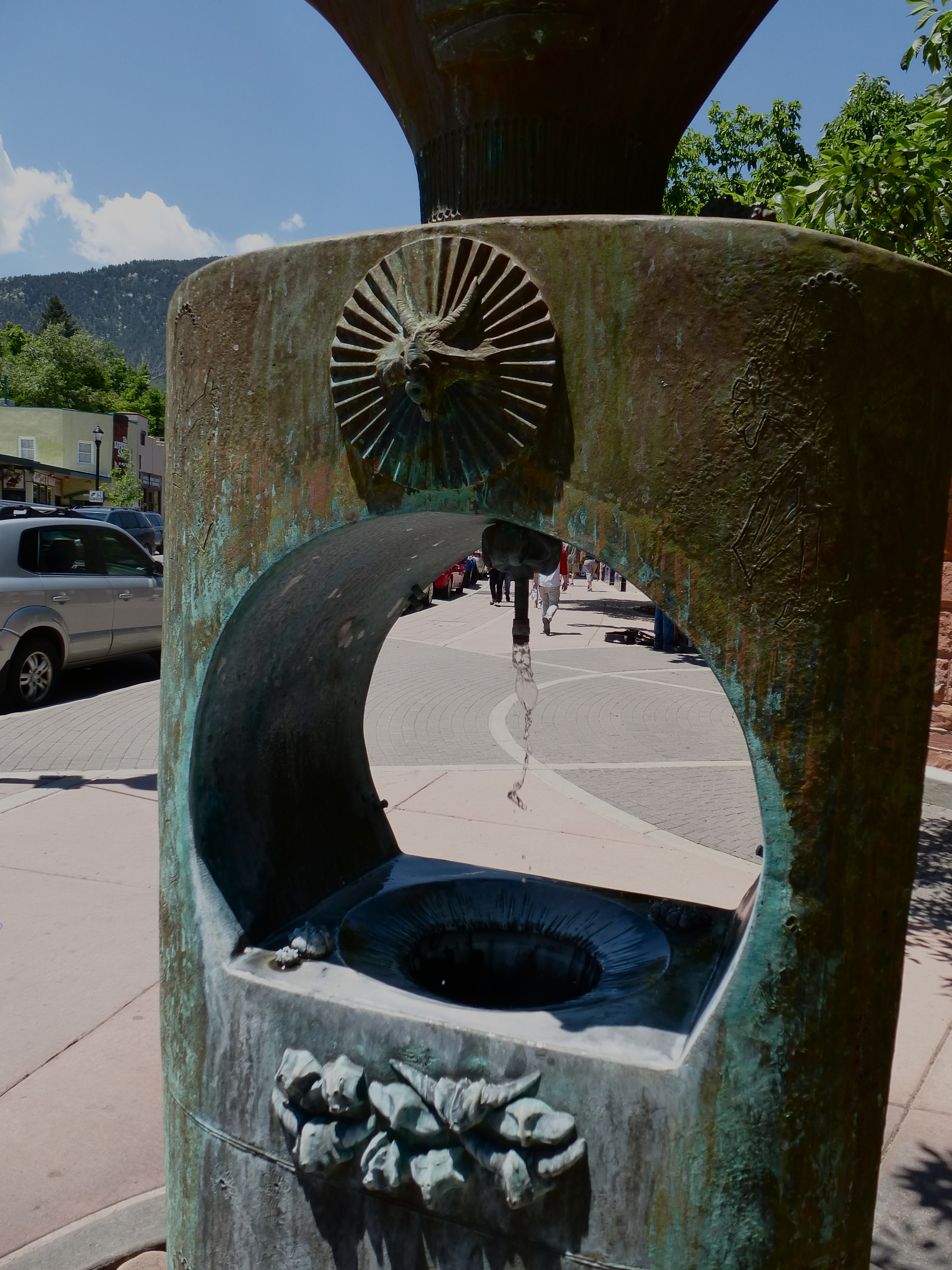 We saw a deer just a block away from the water fountain. Colorado Springs and its environs, like much of Colorado, is full of deer. While driving to Aspen, a deer dashed in front of my car on a busy road, and I was very upset. I didn’t hit it, but it failed to jump the barrier between the lanes and fell into the road. Fortunately, it righted itself and crossed the highway safely, but it was a close call. I can see why I saw so many roadkill deer on my trip from South Dakota to here. One would think that natural selection would endow these animals with a strong aversion to asphalt! 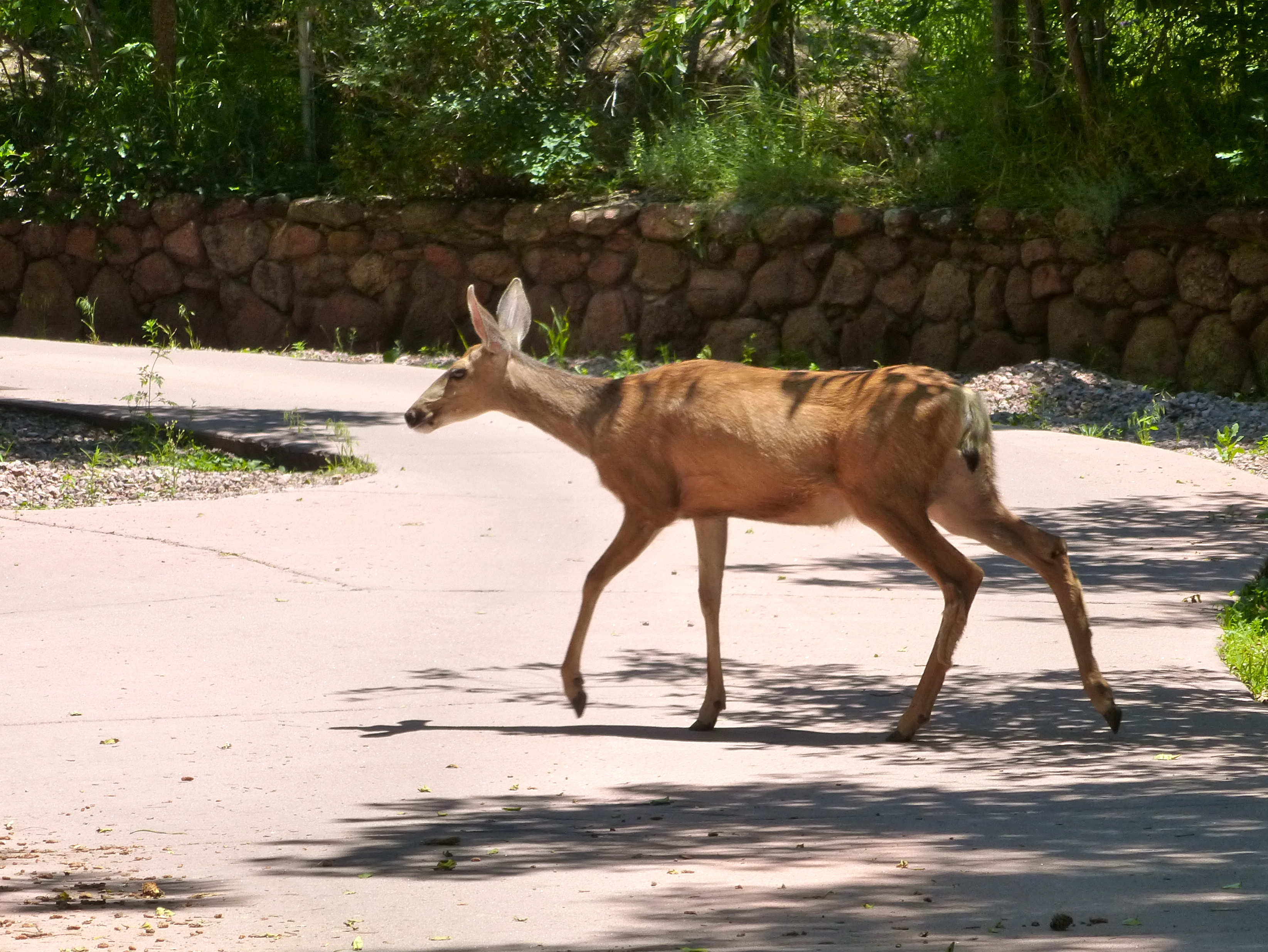 Since the sale and consumption of marijuana is now legal in Colorado, and the stuff is sold widely, I asked Stephen to show me where it was sold. It turns out that it’s sold in three kinds of places. The first two are called “dispensaries,” and are recognized by their having a green cross (emphasizing the medical benefits). Some dispensaries sell only to those who are prescribed marijuana for its therapeutic effects on various conditions (there is no shortage of doctors willing, for a fee, to certify you), while other dispensaries sell both medical marijuana and recreational marijuana—the latter at a higher price.

This is an example of a rather unprepossessing dispensary. There is not much identifying signage save for the green crosses. 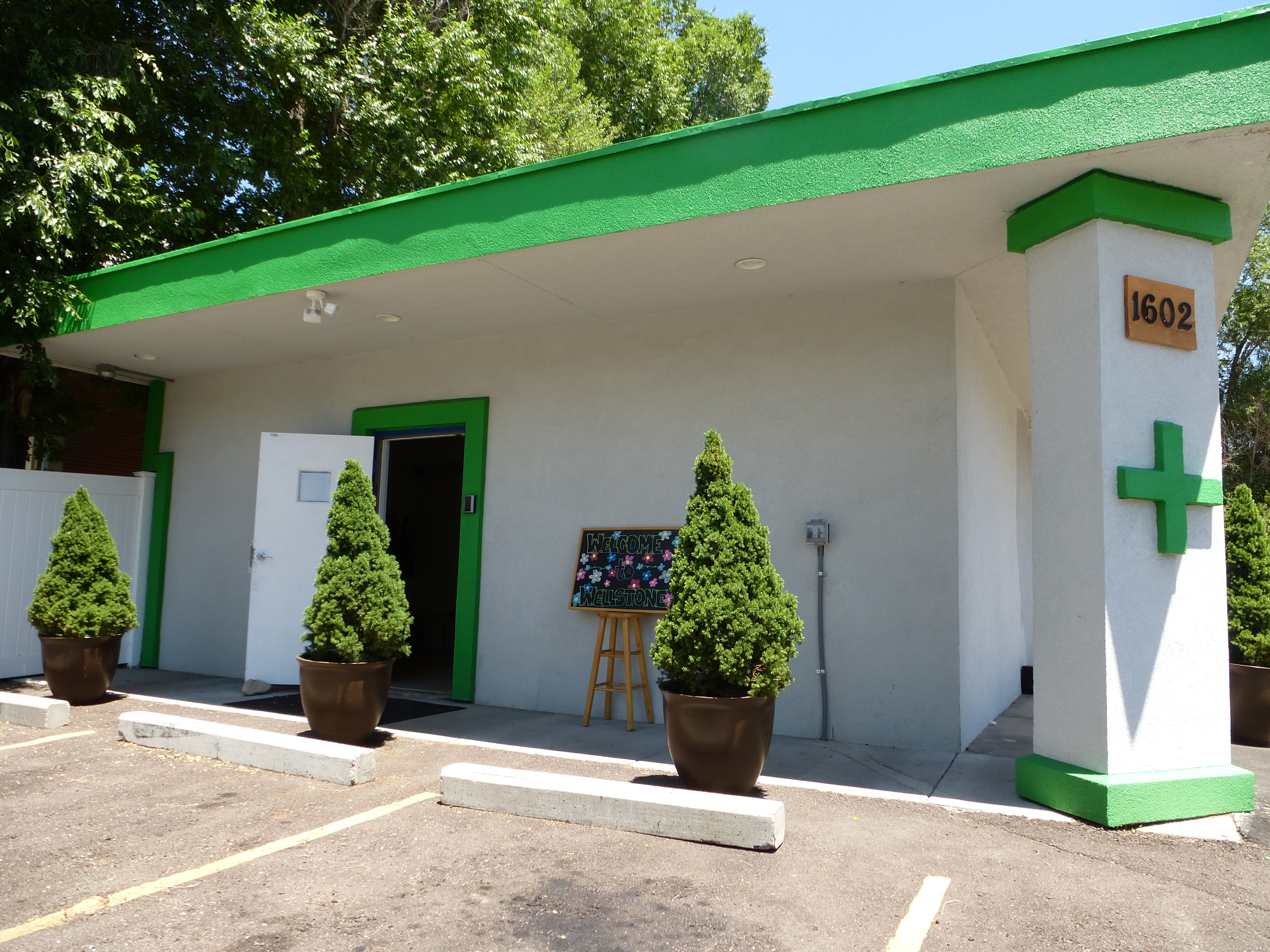 Below is a more famous dispensary selling marijuana and its derivatives for both recreational and medical use. We asked to visit, not trying to buy anything, and, after ID checks (they take your drivers’ license), they let us visit the “bud room”, which I wasn’t allowed to photograph. 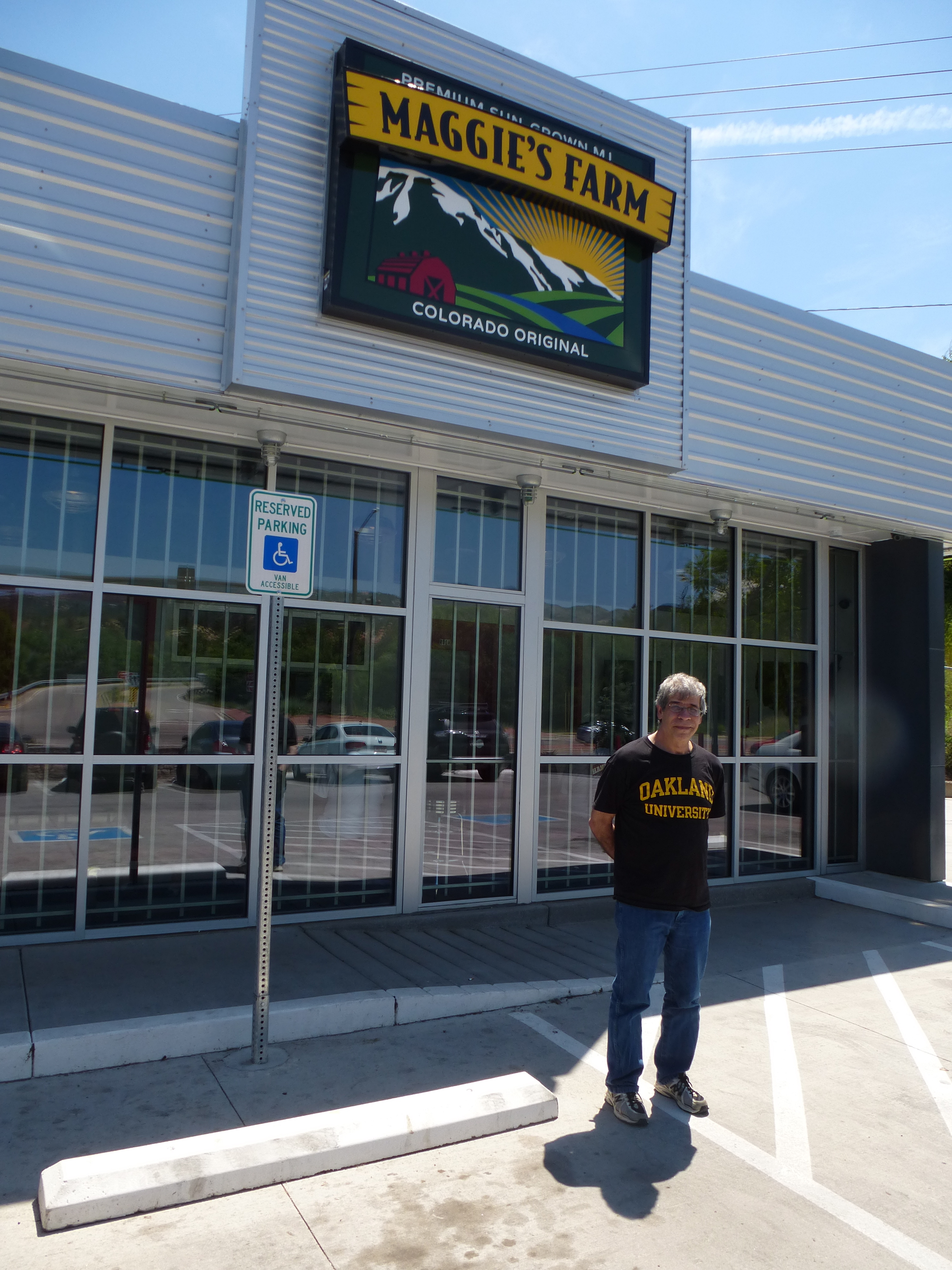 A close-up of the sign showing what they sell: “MJ” (marijuana, of course, known to us in college as “Mary Jane”). 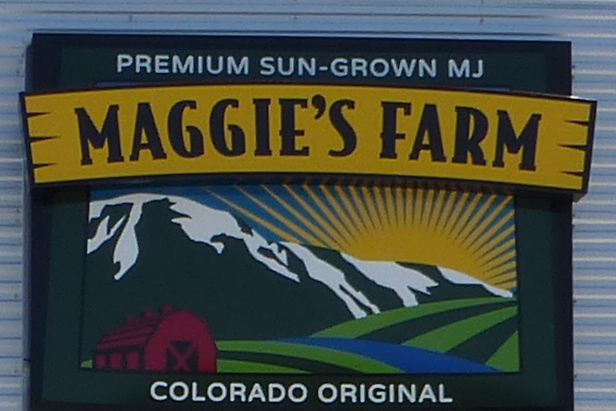 Below are the state rules for purchase and consumption of marijuana that they hand you when you visit. Note the reference to the many kinds of products that has marijuana or its deriviatives in it. We saw not only samples of the different kinds of dried plant, but elixers (liquid flavored substances that you put into your mouth with a dropper bottle), pressurized “delivery systems,” cookies, lollipops, and waxes and “shatter,” new and very powerful extracts of the active substance THC. We didn’t sample any, but I’m told that these new forms of marijuana, as well as the various new types of extracts, are extremely powerful! 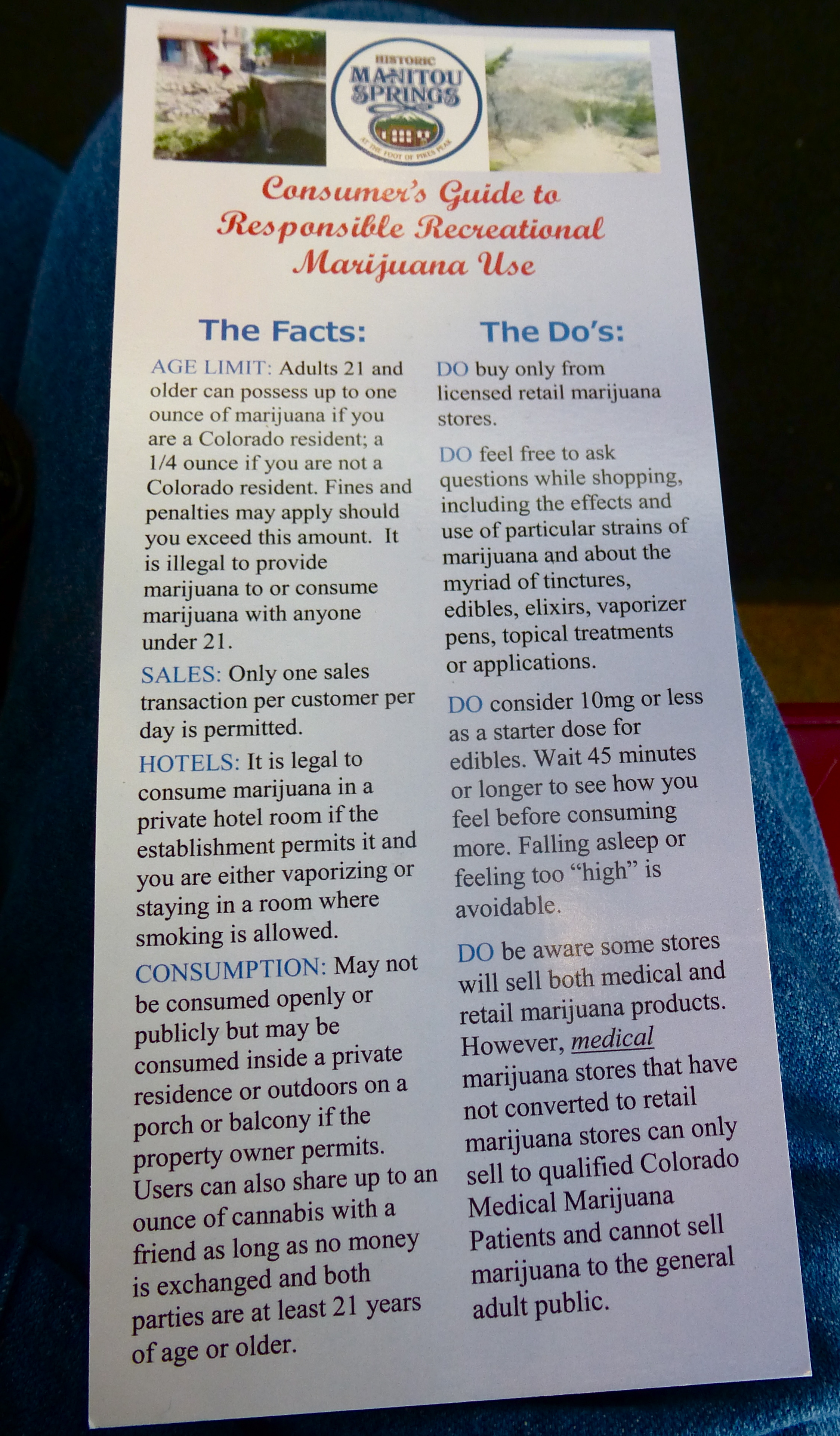 Below is an old-time garage that, because it was decorated with crosses, could have been mistaken for a dispensary (granted, dispensary crosses are green, but desperate stoners might not make that distinction). Notice the sign on the wall: “Private Property. Not a dispensary.” 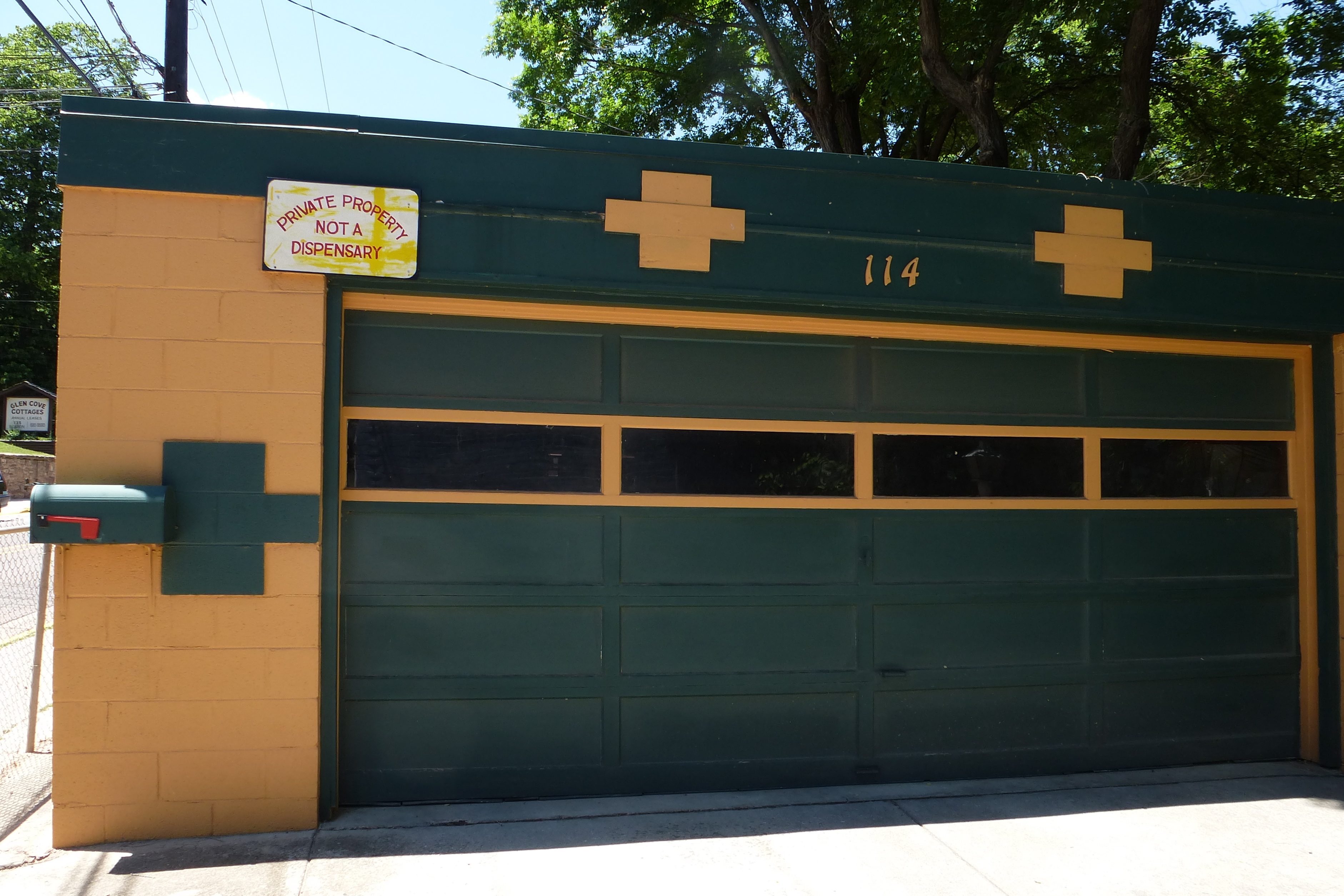 This, the third class of marijuana vendor, is what’s known as a “speakeasy,” where people go to smoke dope in congenial settings (we peeked in the door: it’s kind of a lounge with carpets and leather couches). They also sell various forms of dope that you can smoke on the premises (I’m not sure about the legality of all this, but I guess it’s okay). 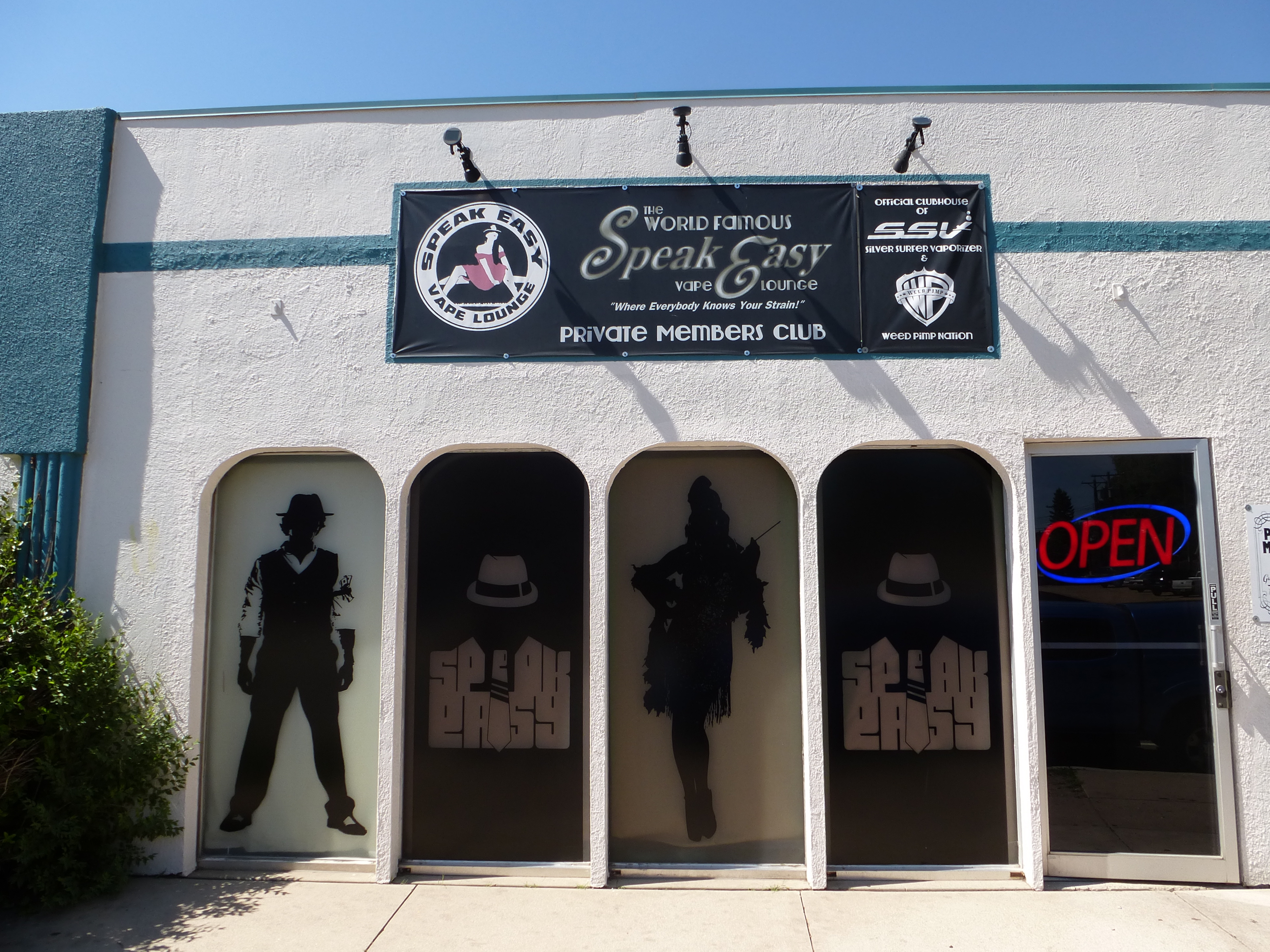 I left early for the four-hour drive to Aspen over the Rockies. On the way you cross Independence Pass (12,095 ft, 3,687 meters), one of the highest paved roads in the US. It’s also astride the Continental Divide: waters to the east of the Divide flow into either the Gulf of Mexico or the Atlantic, those on the west to the Pacific. The beauty of the drive was stunning, though I failed to see the pronghorns and bison that sometimes show up along the route. 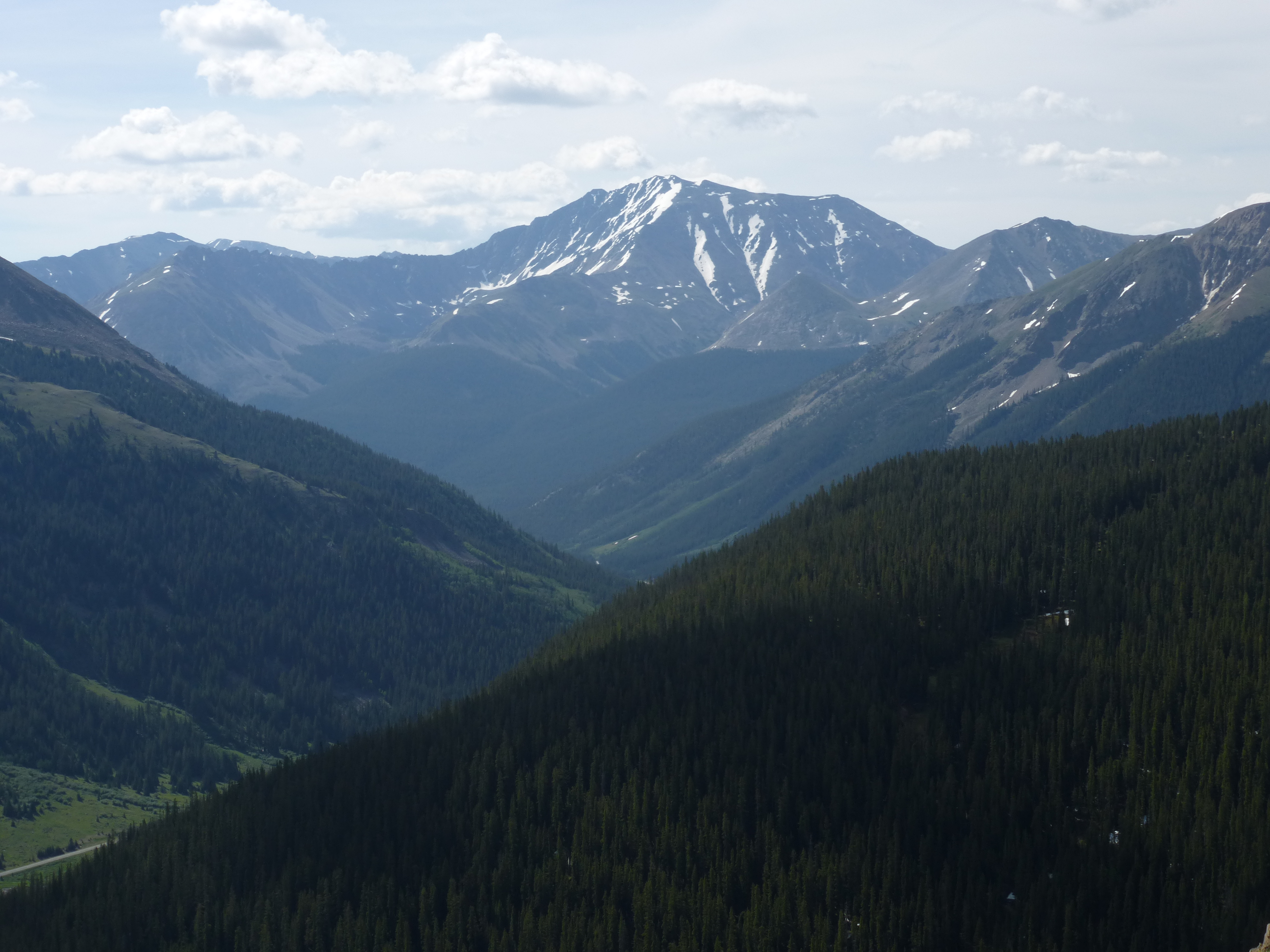