Reader Fernando sent me this item from the New York Times; I had no idea there were such shenanigans going on in Iceland!

It turns out that there is a political party in that country called The Pirate Party (“Píratar”) that appears to have an extreme left-wing political agenda. Apparently there are “pirate parties” in several countries, and Wikipedia characterizes them like this:

Iceland’s Pirate Party won three seats (out of 63 total) in parliament in the 2013 election, becoming the first Pirate Party in the world to actually sit in a national legislature. Here is its symbol: 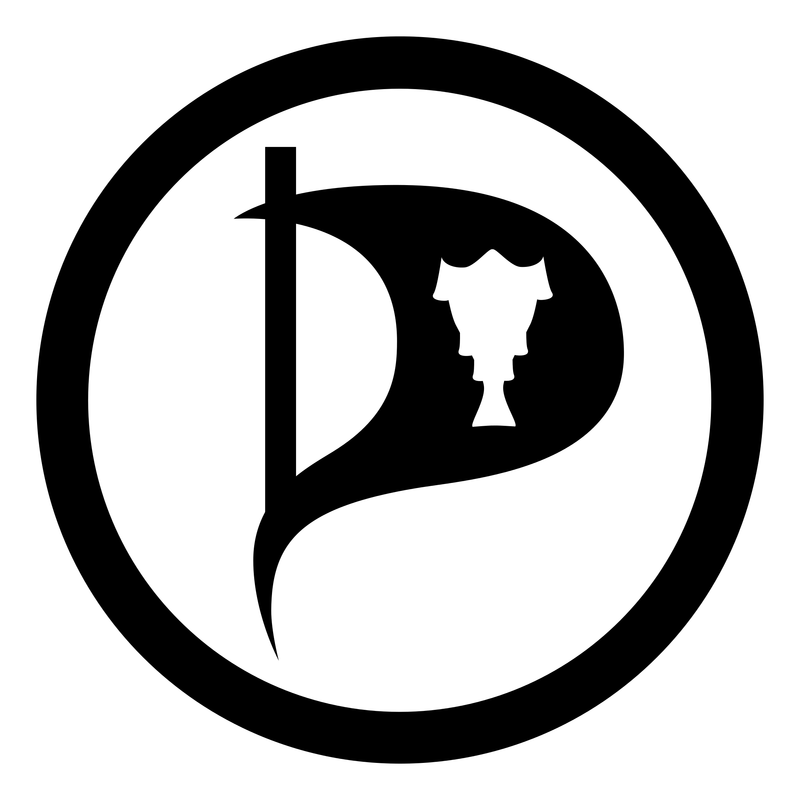 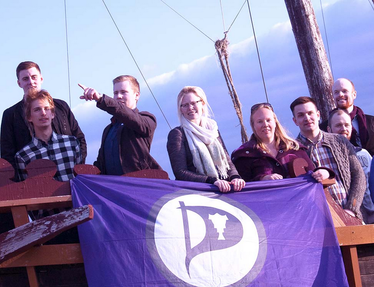 Their platform includes making Iceland a member of the EU only by national referendum, and to grant Edward Snowden Icelandic citizenship (the latter bill failed).

But the Pirates have just had a notable legislative success. According to the Times, the party was the driving force behind a bill that makes blasphemy legal (it was previously illegal in Iceland):

The repeal of Iceland’s 75-year-old law, which protected religions against insult and mockery, came in the wake of the Charlie Hebdo massacre:

Birgitta Jonsdottir, one of three Pirates in the Althing, Iceland’s Parliament, was among party activists celebrating the vote in favor of their bill to repeal the prohibition on impious irreverence, which had been in force since 1940.

The measure to repeal the law, which made “ridiculing or insulting the dogmas or worship of a lawfully existing religious community” an offense punishable by a fine or up to three months in jail, was introduced in January, in the wake of the deadly attack in Paris on Charlie Hebdo, the satirical weekly that enraged devout Muslims with its mocking portrayals of the Prophet Muhammad.

While the vote was underway in the Althing on Thursday, The Iceland Monitor reported, all three of the party’s members took the floor to say, “I am Charlie Hebdo.” After the bill was made law, the party said in a statement, “The Icelandic Parliament has issued the important message that freedom will not bow to bloody attacks.”

Ms. Jonsdottir is a free speech advocate who helped script and edit the WikiLeaks video “Collateral Murder,” made from American military footage leaked by Bradley Manning, now known as Chelsea, that showed the killing of Iraqi civilians and journalists by fire from United States Army helicopter gunships.

So congratulations to the Pirates! Now, says the Times, their Party may become a formidable force in Parliament, in fact, it may become the dominant party. If so, watch out! And Iceland’s Prime minister is worried: “‘Pirate rule, Mr. Gunnlaugsson added, ‘would take society in a whole other direction, where it would be difficult to hang onto those values that we possess and have been building on for decades.’” Yeah, like values that protect religion from criticism. . . .

Here are celebratory tw**ts from the three sitting Pirates: 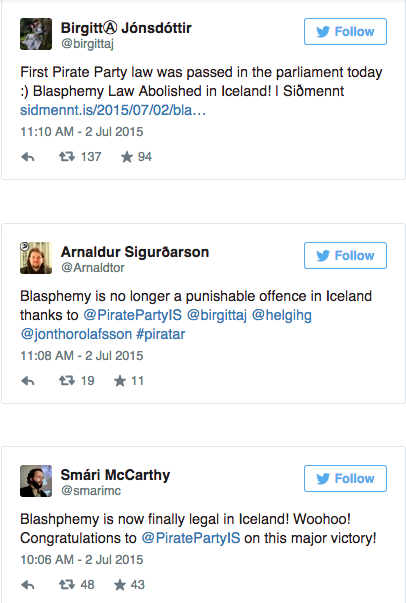