Reader Christopher Moss, who lives on the north shore of Nova Scotia, sent snaps of two varieties of mammals: 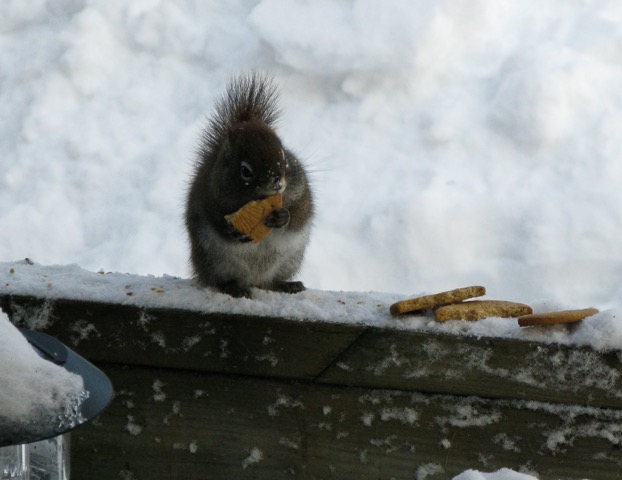 Then I came across the raccoon family [Procyon lotor] that used to live under the back deck. Here are five of them stealinf choke cherries: 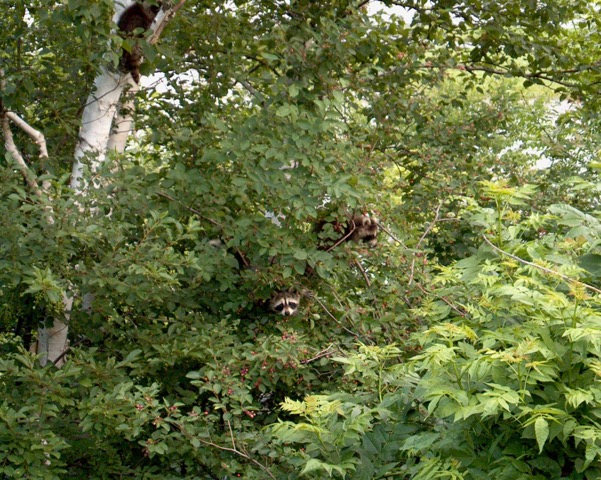 We lived happily together and my son was foolish enough to tame them to hand feed: 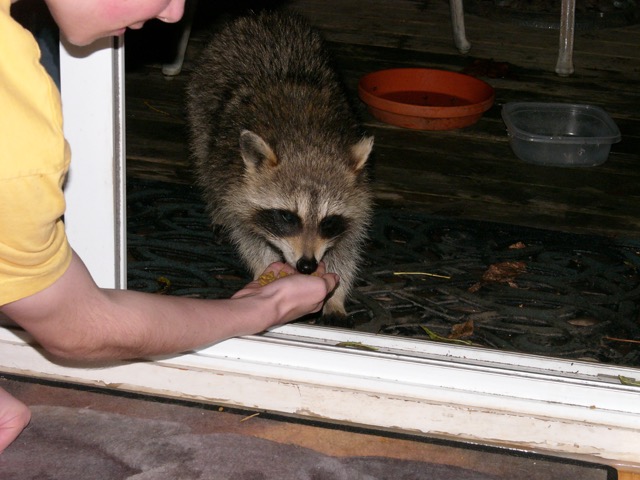 But when I was awoken one night by a terrible noise on my bedroom roof, relations cooled: 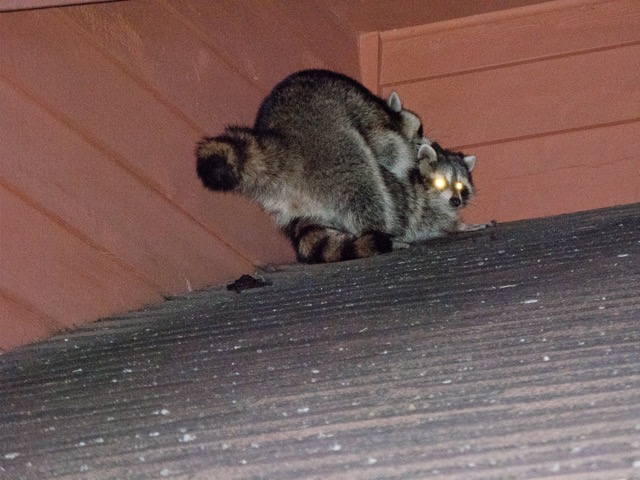 Eventually, carpenter ants ate some important structures at the back of the house, and the deck had to go as part of the rebuilding. The descendants of these raccoons now live under the barn next door.

Here are some fun facts on raccoons from Wikipedia. First, their dexterity:

The most important sense for the raccoon is its sense of touch. The “hyper sensitive” front paws are protected by a thin horny layer which becomes pliable when wet. The five digits of the paws have no webbing between them, which is unusual for a carnivoran. Almost two-thirds of the area responsible for sensory perception in the raccoon’s cerebral cortex is specialized for the interpretation of tactile impulses, more than in any other studied animal. They are able to identify objects before touching them with vibrissae located above their sharp, nonretractable claws. The raccoon’s paws lack an opposable thumb; thus, it does not have the agility of the hands of primates. There is no observed negative effect on tactile perception when a raccoon stands in water below 10 °C (50 °F) for hours.

Note that the “lotor” in the species name Procyon lotor is Latin for “washer,” referring to their habit of dunking their food in water before eating it. It’s not clear why they do this.

Here are the vibrissae (“hand whiskers”): 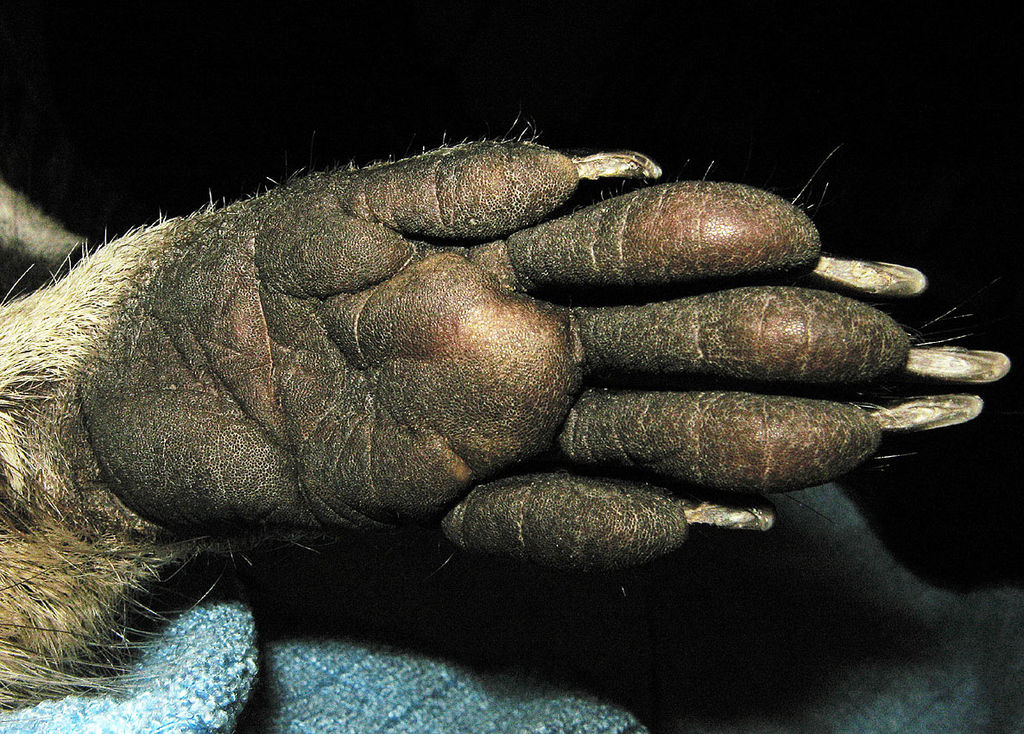 And their renowned intelligence (I’m not vouching for these studies as I’ve not read them):

Zoologist Clinton Hart Merriam described raccoons as “clever beasts”, and that “in certain directions their cunning surpasses that of the fox.” The animal’s intelligence gave rise to the epithet “sly coon”. Only a few studies have been undertaken to determine the mental abilities of raccoons, most of them based on the animal’s sense of touch. In a study by the ethologist H. B. Davis in 1908, raccoons were able to open 11 of 13 complex locks in fewer than 10 tries and had no problems repeating the action when the locks were rearranged or turned upside down. Davis concluded they understood the abstract principles of the locking mechanisms and their learning speed was equivalent to that of rhesus macaques. Studies in 1963, 1973, 1975 and 1992 concentrated on raccoon memory showed they can remember the solutions to tasks for up to three years. In a study by B. Pohl in 1992, raccoons were able to instantly differentiate between identical and different symbols three years after the short initial learning phase.Stanislas Dehaene reports in his book The Number Sense raccoons can distinguish boxes containing two or four grapes from those containing three.

Finally, baby albino raccoons (and the wild type) from Pinterest: 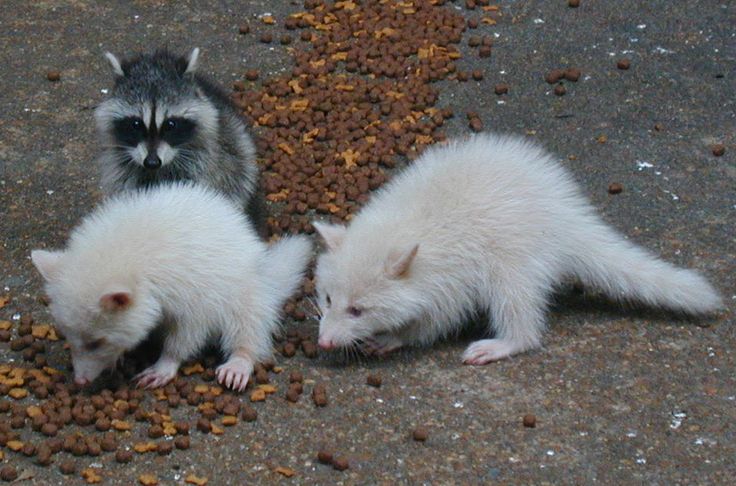