David Barash is a professor of psychology at the University of Washington at Seattle, and has written many articles on evolution as well as several “trade” (i.e., popular) books on science for the public. In yesterday’s Wall Street Journal (link here, but you’ll hit a paywall), he’s reviewed two books on altruism in a piece called “Genes are selfish; humans are not.”

The first book he takes up is David Sloan Wilson’s new volume, Does Altruism Exist? Culture, Genes, and the Welfare of Others, published by Yale University Press. I haven’t read it, but the Amazon blurb suggests that Wilson is still banging on, as he has for years—nay decades—about his theory that altruism in humans and other species evolved by group selection. This is from the Amazon description:

From an evolutionary viewpoint, Wilson argues, altruism is inextricably linked to the functional organization of groups. “Groups that work” undeniably exist in nature and human society, although special conditions are required for their evolution. Humans are one of the most groupish species on earth, in some ways comparable to social insect colonies and multi-cellular organisms. The case that altruism evolves in all social species is surprisingly simple to make.

And it did not escape my notice, nor will it yours if you go to the Amazon page and inspect the acknowledgments, that Wilson was funded by, and vigorously osculates the rump of, the John Templeton Foundation, which for years has funded him and his program at the State University of New York at Binghamton: 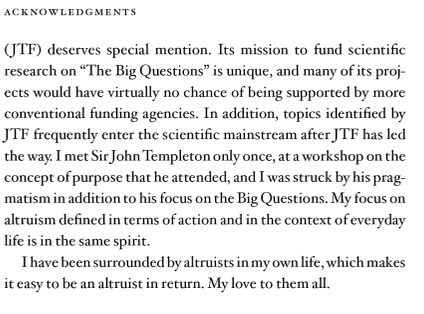 For Wilson, the issue is settled: group selection explains altruism, religion, and all sorts of traits in humans and other species. If you don’t recall his claim, it’s that animal altruism is genetically based, and evolved through group selection: although altruistic individuals may suffer a reproductive deficit, sacrificing their lives or offspring to help individuals who are unrelated, groups of altruists do better than groups of selfish individuals, and hence displace them. Assuming that humans lived for much of our evolution in such competing groups, Wilson concludes that human altruism is a product of group selection.

The problems with this group-selection explanation are well known, and I’ve written about them a length. Rather than reprise them here, I refer you to Steve Pinker’s superb Edge essay on the question, “The false allure of group selection.” My own view, which I lay out in FvF, is that true altruism (in which one sacrifices one’s reproduction and/or life for unrelated individuals) is a rare phenomenon in humans, and, when present (viz., volunteer firemen and soldiers falling on grenades) is explained by either cultural phenomena (“the expanding circle” of Peter Singer) or the hijacking of behaviors that evolved by kin selection, in which one can evolve seemingly “altruistic” behaviors through natural selection, but in which those behaviors actually promote the spread of the genes producing the behavior. In a genetic sense, that’s not “altruism” at all. Group selection is a cumbersome add-on, and, as Pinker shows, there are formidable objections to that process as an explanation of altruism. Indeed, I can think of only one or two examples from nature (neither in humans) that point to group selection in any species.

But despite these problems, Wilson makes the best of a bad position, simply sounding an unseemly and scientifically unwarranted note of triumphalism in posts on his website such as “Mopping up final opposition to group selection,” and “The tide of opinion on group selection has turned.” Barash rejects the cry of victory:

. . . the best scientific explanation for altruism’s existence (and the one accepted by most evolutionary biologists) is that, at the most basic causative level, altruism isn’t really altruism at all, but rather selfishness. When bodies appear to be acting altruistically, what’s actually happening is that “selfish” genes within those seeming altruists are benefiting identical copies of themselves in other bodies, often genetic relatives. Other mechanisms have also been identified, including reciprocity, manipulation, reputation enhancement and, at least in theory, group benefit: Some have proposed, that the herd or colony (or as we might say, community) is the unit of natural selection, rather than the individual organism.

This last possibility, although accepted at times in the past, has been largely debunked, with the recognition that, in fact, genes are the entities that reproduce themselves and that persist over time. Moreover, altruism is necessarily overwhelmed by selfishness within a group. In order for natural selection to promote altruism, groups containing altruists would have to reproduce themselves so effectively as to outweigh the selection against altruism among the group’s individuals. It’s a mighty tall order.

David Sloan Wilson, a professor of anthropology and behavioral sciences at Binghamton University, has nonetheless been a persistent advocate for group selection, and “Does Altruism Exist?” is the latest salvo in his rather lonely campaign. Indeed, many evolutionary biologists can hardly believe that such an accomplished researcher can be so stubbornly persistent in a losing cause. “When smart people take a wrong turn at the beginning,” he writes at one point, “they often go a long way before realizing their mistake.” Indeed.

Note that, according to Barash, Wilson makes a pretty serious mistake in imputing multicellularity to group selection (my emphasis):

Many animals live in social groups and tailor their behavior to maximize their success and that of their relatives within those groups. But it is misleading to describe such individual-level adaptations as having evolved “for the benefit of the group.” Especially absurd is Mr. Wilson’s contention that the very existence of multicellular organisms, including human beings, supports his contention; he claims that each of us is a group whose cells might therefore be congratulated for their coordination and cohesion, as a manifestation of group-selected altruism. The simple reality, however, is that our cells are genetically identical. When a liver cell labors at the unpleasant task of detoxifying blood while leaving all the fun of reproducing to the gonads, that cell isn’t being altruistic at all but rather wholly selfish, since the success of the gonads is biologically indistinguishable from success of the liver cell.

“Does Altruism Exist?” presents a simple arithmetic model purporting to show how altruism can readily evolve by group selection. It does nothing of the kind. The model is based on some simple assumptions, including the rather large one that groups containing altruists are more fit than groups whose members are all selfish. From there, it is easy to see that group selection “works” and that altruism can win out over selfishness, even though individual altruists are less fit than their selfish colleagues. I could similarly demonstrate my ability to outrun Olympic gold medal sprinter Usain Bolt: Start with the assumption that I run 100 meters in 8.9 seconds; the rest is easy.

Barash then says that humans might indeed be a species in which group selection is theoretically possible, because we can punish defectors and, at least at present, feel that we should act for the benefit of the group. But Barash doesn’t mention that those feelings can be more parsimoniously explained by either reciprocal altruism or kin selection, as invoking group selection means a relentless pruning of entire groups, which then become unstable to the invasion of “selfish” genes. Altruistic groups are simply unstable to the invasion of non-altruists. (The turnover of entire groups must outpace the turnover of gene copies, an unrealistic assumption.) And, as Pinker points out, the qualities that have enabled societies to thrive are not sweetness, light, and empathy, but coercion, brutality, and oppression:

Thus we have a nice set of competing empirical predictions for any examples of group-benefiting self-sacrifice we do observe in humans. If humans were selected to benefit their groups at the expense of themselves, then self-sacrificial acts should be deliberate, spontaneous, and uncompensated, just like other adaptations such as libido, a sweet tooth, or parental love. But if humans were selected to benefit themselves and their kin in the context of group living (perhaps, but not necessarily, by also benefiting their groups), then any guaranteed self-sacrifice should be a product of manipulation by others, such as enslavement, conscription, external incentives, or psychological manipulation. [Pinker then shows that the latter hypothesis better fits the facts.]

. . . Finally, let’s turn to the role of altruism in the history of group-against-group conflict. Many group selectionists assume that human armed conflict has been a crucible for the evolution of self-sacrifice, like those in insect soldier castes. They write as if suicide missions, kamikaze attacks, charges into the jaws of death, and other kinds of voluntary martyrdom have long been the norm in human conflict. My reading of the history of organized violence is that this is very far from the case.

I’d highly recommend that you read Pinker’s essay in toto if you want a good presentation of why group selection is an unrealistic explanation for cooperative behaviors. It’s accessible to the scientifically interested layperson.

Mr. Wilson deserves a kind of admiration for his lonely battle to resuscitate group selection, even perhaps for his chutzpah, as when he claims that “multilevel selection” (which includes group selection) is “in the same category as other scientific advances, such as the Copernican view of the solar system, Darwin’s theory of evolution, and the theory of continental drift.” Nearly as bizarre is his claim that group selection has “won” the scientific battle, which brings to mind the suggestion by Sen. George Aiken, during the Vietnam War, that the United States ought to declare victory, unilaterally, and then leave. At least in that case the U.S. really had won every major battle. Mr. Wilson is of course free to declare his own victory, but his “forces” haven’t achieved anything of the sort.

I don’t think that “admiration” is the appropriate feeling here; “pity” is more apposite, or even distaste at the hubris of comparing multilevel selection to the ideas of Darwin and Copernicus. In my view, Wilson is wasting a perfectly good brain peddling a dubious scientific product, and, to make matters worse, then distorts the situation by falsely claiming that the battle is over: he’s won big time. But he hasn’t, for virtually everyone who works on the evolution of social behavior has rejected the hegemony of group selection. Why that makes Wilson declare victory even more vociferously is a matter for psychologists.

The other book that Barash reviews is a huge tome that deals not with the biology of altruism, but its various social aspects, as well as an attempt to promote it. It’s the 864-page behemoth Altruism: The Power of Compassion to Change Yourself and the World by Matthieu Ricard, a Buddhist monk. Since it doesn’t deal with biology, I’ll pass over it except to say that Barash, who has himself written approvingly of Buddhism, likes it a lot:

But whereas Mr. Wilson is interested in altruism in part because it serves his purpose — making a case for a scientifically dubious phenomenon (group selection) — Mr. Ricard is simply concerned with altruism for its own sake: He wishes to explore and promote it by whatever means necessary and regardless of the mechanism(s) by which it may be furthered.

. . . A personal confession: When I agreed to review this enormous book, I had the sneaky, selfish temptation to simply skim it (after all, I already knew a fair amount about the biology of altruism and about Buddhism). But I was waylaid by Mr. Ricard’s erudition, his captivating prose, the depth and the breadth of his material. This book is so rich, so diverse and, yes, so long that it is best kept as an inspiring resource to be consulted over many years.