In October of 2012 I was invited to the “Moving Naturalism Forward” conference, a small group of people charged with discussing how we could promote naturalism in today’s world. It was organized by Official Website Physicist™ Sean Carroll, funded by the generosity of Nick Pritzker (we paid for our own lodgings and food), and held at the Red Lion Inn at Stockbridge, Massachusetts. I posted a bit about the meeting (here, here and here), and so the provenance of the book I’m about to describe is impeccable.

I decided that since there were going to be so many luminaries at the meeting, I would bring a hardbound, first-printing copy of WEIT with me, and ask people to sign it. My intention was always to offer the book up for eBay auction, donating the proceeds to the Official Website Charity™, Doctors Without Borders.  Everybody at the meeting signed it, and, at my request, added a few words (or equations) about naturalism.  Steve Weinberg, for instance, drew a Feynman diagram of the production of a Higgs boson—before the boson was found! Other people who signed are mentioned below.

After I got the autographs, I posted about it here, and reader Ben Goren suggested that I should ask Official Website Artist™ Kelly Houle (who is producing a fantastic hand-illustrated, illuminated and lettered version of On the Origin of Species, a project that will take the better part of a decade) if she could possibly add a drawing or two to the book. She did more than that: she lavishly illustrated the dedication page and secondary title page with superb artwork in graphite, colored pencil, gold leaf, and iridescent watercolors (see below). Each chapter heading also has a gold-leaf application.

After that, I held onto the book for a while (actually, two years), so I could collect more signatures, and as I met famous secularists I asked them to sign the book.  Now it’s done, and we’re offering it up for auction on eBay. Kelly also produced a velvet-lined presentation box for the book: 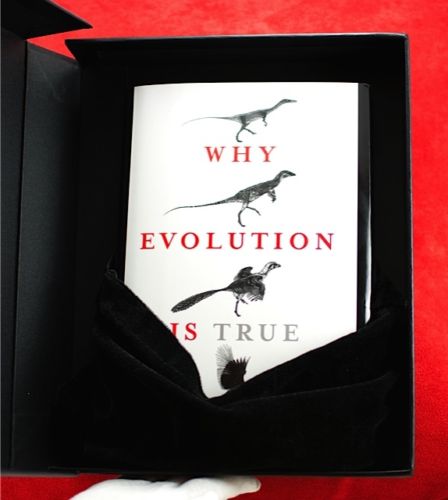 The eBay listing is here (you can also go here), and will run for nine days.  The starting price was $995, and there are now three bids. Given all the people who signed it, and the addition of Kelly’s artwork, this is a one-of-a-kind item: you’ll never see anything like this again; and we hope someone will pay a goodly sum for it.  Every penny of the purchase price will be donated to Doctors Without Borders.

Below are some pictures of the book (you can see more at the eBay listing). Signatories include Ben Goren (with a genuine pawprint from his famous cat Baihu), me, Kelly, Alex Rosenberg, Sean Carroll, Jennifer Oulette, Richard Dawkins, Simon DeDeo, Dan Dennett, Steven Weinberg (I’ve also included a sheet of hotel notepaper on which Weinberg scrawled equations during the meeting), Massimo Pigliucci, Owen Flanagan, Nick Pritzker, Don Ross, Janna Levin, and Terrence Deacon. That was at the meeting, and everyone added a nice phrase or equation expressing their respect for naturalism. After the meeting I got the book signed by Steve Pinker (when he visited Chicago), Annie Laurie Gaylor, Dan Barker, Carolyn Porco, and Lawrence Krauss (the last four signed at the 2014 “Imagine No Religion” conference at Kamloops).

Here are some photos of what we’re offering: 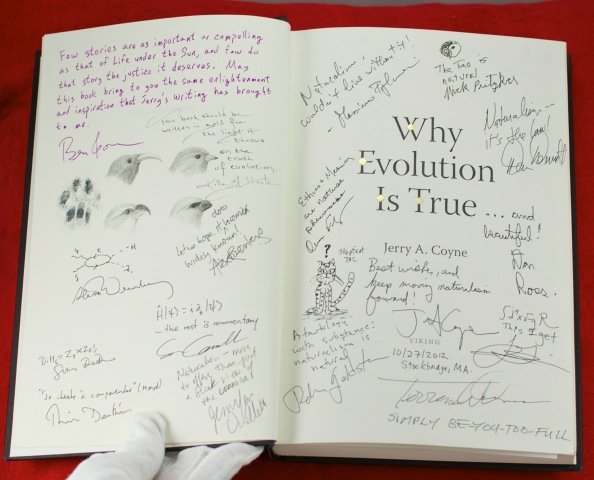 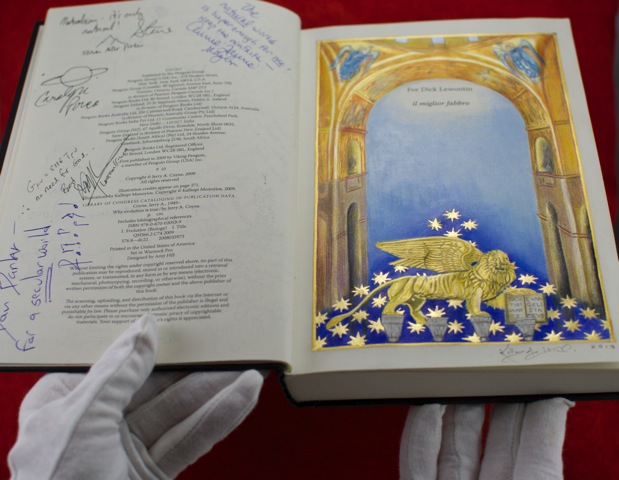 Kelly also used an old Victorian natural-history trope: she illustrated the secondary title page with “Darwin’s orchid“, Angraecum sequipedale, (yes, it was mentioned by him, and he famously posited that a flower with such a long nectar spur must be pollinated by a moth with an even longer tongue). 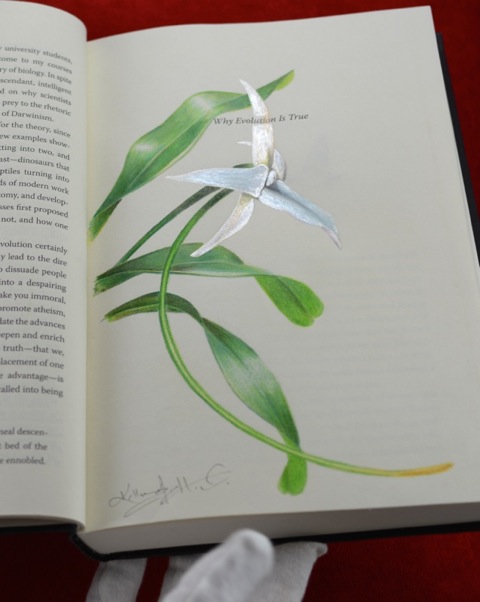 The moth (Xanthopan morganii praedicta), which was later found just as Darwin had predicted, is on the reverse side of the page. 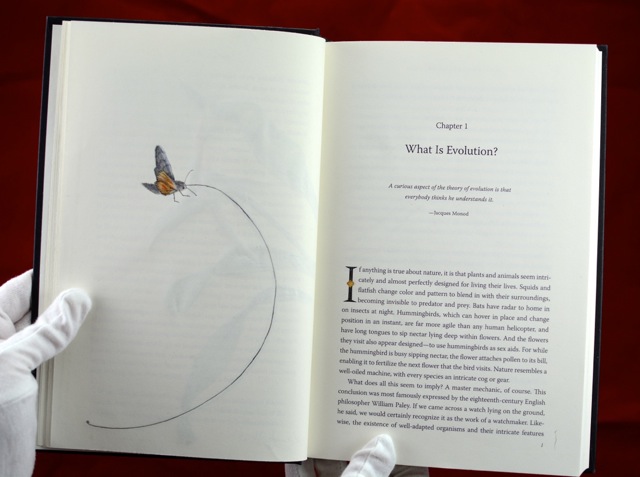 When you hold the page up to the light, you can see the moth with its proboscis in the nectar spur, pollinating the orchid! 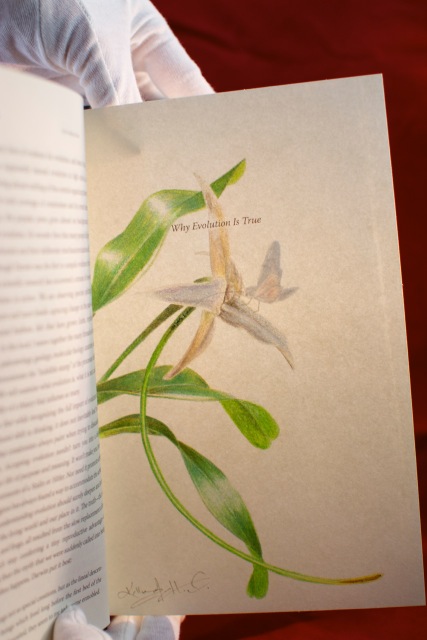 Kelly is also offering some of her own artwork in the auction, and she does this only rarely. You can buy other pieces of her work at her site, with the proceeds going to the Darwin Project. I have several of her beautiful beetle paintings, some of which are still available. If you go to the book link, you’ll see “other items” in the upper right hand corner under the seller name “books illuminated” (clicking on the link here should take you there). There you will find several items (there will be more) that Kelly is selling. There is, for instance, this original manuscript illumination, a small version (22 X 30 inches) of Kelly’s title page for the Illuminated Origin, which will be quite large. This is done in hand-painted watercolor and hand-illuminated gold leaf and lettering. It’s a gorgeous work of art that any natural history buff would love, and it starts at $599. The painting was donated by a generous reader of this website, who received it for donating to Kelly’s Kickstarter project for The Illuminated Origin, and then allowed it to be auctioned off. The proceeds will also go to Doctors Without Borders: 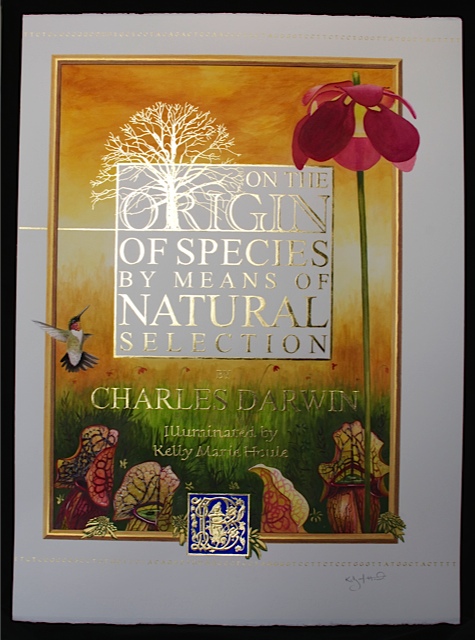 Here are two pages from what will be the final illuminated Origin, so you can see how large it will be. The entire book will be hand-lettered and illuminated, just like a medieval manuscript. But it’s Darwin, which is deliciously ironic: 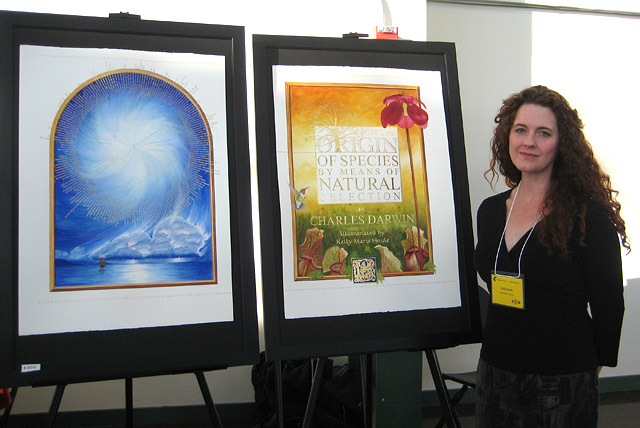 If you have some spare bucks kicking around, or some rich friends who love evolution and natural history, do make them aware of this book’s auction. And remember, all of our efforts are donated: all proceeds from the sale of this copy of WEIT will go to Doctors Without Borders, which does fantastic work helping the sick and injured throughout the world. Needless to say, the organization is secular.

Note: Sean Carroll has already posted about the book at Preposterious Universe.

56 thoughts on “Multiply-autographed and illustrated copy of WEIT finally up for auction, proceeds to charity”