A new paper by Timothy O’Brien and Shiri Noy in American Sociological Review (free download; reference at bottom) has gotten a lot of attention from the media. It shows that Americans are, by and large, friendly to science—but that the friendship stops when the science conflicts with people’s faith.

I’m not sure why this paper got so much press, unless people like the new trichotomy it proposes about American attitudes, as well as its trendy neologism of a “post-secular perspective”. For the results pretty much confirm what we all know: most Americans are religious, many of those religious people do accept science, but those who reject science often do so only when the science conflicts with their religion. To the authors of this survey, that means the Big Bang and evolution.

The authors analyzed already-existing data from the General Social Survey, a poll of Americans’ views taken every two years. Besides polling Americans on their demographic information (age, location, education, and so on), and on their political and religious views (denomination, strength of belief, views on abortion, fuel economy standards for cars, GMOs, etc.), it also got information on the subjects’ knowledge of science. They asked 12 “innocuous” questions (e.g., “Does the Sun go around the Earth or the Earth around the sun?”, “Are electrons smaller than atoms?”) and 2 hot-button questions (“Did the Universe begin with a huge explosion?” and “Did human beings develop from earlier species of animals?”). Finally, they got information on people’s attitudes toward science in general (e.g., agree or disagree: “Science makes our way of life change too fast,” or “Scientific research that advances the frontiers of knowledge is necessary and should be supported by the federal government”).

To analyze the data, the authors used a method with which I’m unfamiliar: “latent class analysis,” or LCA. It apparently extracts the number of classes of individuals that are necessary to best explain patterns in the data about science and science attitudes, assuming that attitudes among different variables are correlated, as they are. Before they did the analysis, they identified four possible views on science and religion, to wit:

But what they found were three classes: all but the “postmodern” view, which the authors say would include those people who view both science and religion unfavorably, perhaps because they disdain all claims of truth. Instead, they found the data divided fairly neatly into the traditional, modern, and “post-secular” views.

Traditionals view religion favorably and science unfavorably, know less about science than members of the other two groups, but report stronger levels of religious affiliation (for example, 46% of them say that the Bible is the literal word of God compared to only 31% in the overall sample—a figure that is still astounding to me). Traditionals constituted the largest class: 43%.

Moderns, who have the reverse attitude (yes to science, no to faith) constituted 36% of the sample.  They know more about science and have more favorable attitudes about science than do members of the two other classes.  They are of course less religious than the other groups: for instance, only 3% felt that the Bible was the literal word of God.

And the post-secularists, who are friendly to both science and faith, composed 21% of the population. They are just as religious as the traditionals: 48% see the Bible as the literal word of God. But they are indistinguishable in scientific knowledge from the moderns—EXCEPT on three issues, issues on which post-secularists diverge strongly from moderns but aren’t quite as denialist as are traditionals. Those three questions, and the proportion of each of the three classes agreeing with them, are shown in the summary chart from PuffHo: 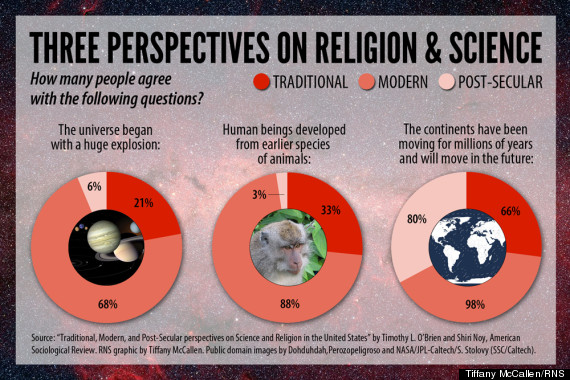 (Surprisingly, moderns have lower agreement with the Big Bang than with evolution and continental drift.)  What do those questions have in common? They are the only ones that conflict with Abrahamic religious faith. Traditionals in general disagree with or are ignorant of what science says, but post-secularists reject the science when it implies that the universe started with a “huge explosion” (it didn’t really) or that humans evolved or that continental drift occurred over millions of years (it’s the “millions of years” that bothers them). I’m a bit surprised that post-secularists reject the notion of a Big Bang, because that’s largely compatible with theism, unless you believe that the universe was created exactly the way God said in Genesis, and even then you could metaphorize a tad and still make the story compatible with the Big Bang.

If you reject science when it comes into conflict with your faith, then you don’t have a truly scientific attitude, i.e., one that follows the facts wherever they lead. In toto, then, 43% + 21%, or 64% of Americans, deny science when it conflicts with their faith. 36% are with science down the line, with 88% of these accepting human evolution—one litmus test for evolution since it rejects human exceptionalism.

I’m actually pleasantly surprised at that 36%. It appears higher than the Gallup Poll’s recent finding that only 19% of Americans accept purely naturalistic evolution, but there is a big difference between the two results.  Gallup found that an additional 31% of Americans accept human evolution with the proviso that God guided it. O’Brien and Noy’s data don’t say anything about how many who accept evolution see God’s hand in it. Accepting theistic evolution is not being down with science, since you think God tweaked the process; and we have no idea what proportion of the 88% of moderns who accept human evolution—or, indeed of the 33% of post-secularists and 3% of traditionals who also do—see that evolution as guided by God.

In the end, I’m not clear why so much is being made of this study. Anyone who’s studied science acceptance in America knows that most people are science friendly, but that this friendship disappears when it involves issues that conflict with religion. After all, the U.S. is the world’s most religious First World country.

The inability to find “postmoderns” who reject both science and religion doesn’t surprise me. By and large, Americans are not morons, and if you’re not religious you’d have to be either an idiot or a postmodern humanities professor to reject science.

There are other interesting results of this study—the association between these three classes and political views, for instance—but since the study is free online I will leave you to read those bits for yourself.
_____________