As you know, all officially recognized species have both a common name and a Latin binomial. I, for example, am a human (common name), but also a member of the species Homo sapiens (official binomial), and I used to work on the fruit fly or vinegar fly (common name), known officially as Drosophila melanogaster (meaning “black-bellied dew lover” in Latin). The Latin binomials are governed by a large set of rules in a big green book issued by the International Commission on Zoological Nomenclature (ISZN). This body is in charge of recognizing genus and species names in animals (the first and second parts of the Latin binomial, respectively), but also of one other taxonomic level, the names of families (Drosophilidae for the fly, Hominidae for living humans).

You can change the common names of species, and of course they do vary from country to country, but the Latin or scientific names, once assigned and approved, cannot be changed except under certain circumstances. Suppose, for example, that the frog named after me, Atelopus coynei, was found to have been described previously under a different name. The earliest name gets precedence, and poor A. coynei becomes what’s known as a nomen nudum, or “nude name”, a name that should no longer be used for this species. Fortunately, that hasn’t happened, so my one scientific legacy seems secure.

There are other circumstances that mandate changing the Latin binomial of an animal species under Da Roolz, some of which you can see here. But under no circumstances can finding anything new about the biology of an animal, or about the history of its Latin name, mandate a name change. That’s because the Latin binomial is the permanent name of a species that can be recognized and used by all scientists worldwide, and willy-nilly name changes would mess up all kinds of science, including taxonomy itself as well as conservation.

Now the common names of species are being changed right and left—mostly these days on moral or political grounds. For example, the “gypsy moth”, Lymantria dispar, was considered offensive since “gypsy” is a slur (they’re now called “Roma”). Ergo the Entomological Society of America, which creates and maintains the Common Names of Insects and Related Organisms List, declared that the moth will now be called, in common parlance, the “spongy moth.” (Most people still call it the “gypsy moth,” and that’s how you’d best look it up on Google.

And a lot of proposed common name-changing is going on, mostly for creatures named after people seen as immoral, bad, or harmful. I’ve written about some examples (here, here, and here), and not always approvingly because, as with many name changes like this, some people’s overall contributions are contentious (“Audubon’s Oriole,” for example, is up for a common-name change because John James Audubon decapitated corpses for scientific study). (It’s still known as Audubon’s Oriole for the time being.) What will NEVER change, however, is its Latin name, Icterus graduacauda.

Other bird species are also up for renaming, but in some cases the offensive person used in the common name is also used in the Latin name. Examples: Audubon’s warbler (Setophaga auduboni), Townsend’s warbler (Setophaga townsendi), Hammond’s flycatcher (Empidonax hammondii) , and McCown’s longspur (Rhynchophanes mccownii). You can change the common name, but people are calling for changes in the Latin name as well. After all, if one name is seen as harmful, why wouldn’t the Latin name be too?

But the ICZN, recognizing the taxonomic confusion that changing a Latin binomial name would cause, has issued a no-nonsense statement saying, in effect, “No changes in Latin names for political or ideological reasons.” And I think that policy is correct given the mess such changes would cause.

This policy is outlined in the three-page statement below (pdf here, reference at bottom) and published in the Biological Journal of the Linnean Society. The many authors are all members of the ICZN; indeed, this may be the entirety of the organization’s leadership. Click to read: 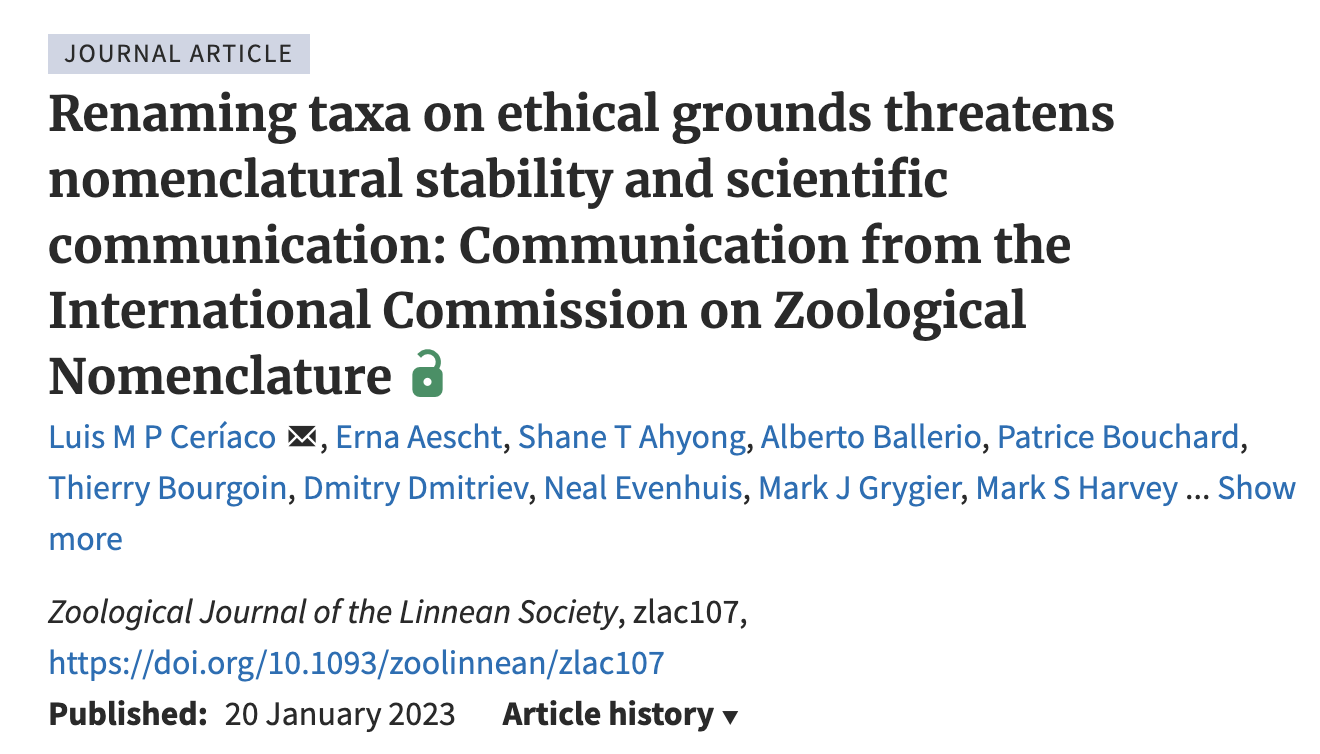 The ICZN notes that they do include in the Code of Nomenclature a recommendation against giving new animal species names that “would be likely to give offense on any grounds,” but that is not a binding rule, and, as you see, some of the Latin names given above, names now seen as offensive, were not seen as offensive when they were given. So there’s nothing that can be done about them. I’ll give a few quotes from the article, for it’s written clearly and forcefully:

Here’s the pressure they’ve been under:

The ethical appropriateness of some scientific names has recently been questioned. This is the result, in part, of ongoing societal re-evaluations of past attitudes, particularly in the context of sexism, racism and colonialism. Part of the botanical community has put forward proposals to replace ‘culturally offensive and inappropriate names’ (Hammer & Thiele, 2021); to ‘permanently and retroactively eliminate epithets’ containing perceived racial slurs (Smith & Figueiredo, 2021a) or honouring colonial actors (Smith & Figueiredo, 2021b); or to replace established and accepted scientific names with new scientific names based on indigenous ones (Gillman & Wright, 2020). These proposals have received both support (Knapp et al., 2020; Thiele et al., 2022) and criticism (Palma & Heath, 2021; Mosyakin, 2021, 2022a, b). Besides reactions published in the scientific literature, debates have also erupted on social media platforms, such as ResearchGate.

Similar proposals are now being put forward in zoology. Recently, a suggestion was made to replace the scientific names of several North American freshwater fishes ‘named after people who advocated racist and sexist views, used derogatory names in their writings, or did reprehensible things during their careers’ (Tracy, 2022). Likewise, in the field of hominid taxonomy, a proposal to replace a long-established scientific name that carries ‘social-political baggage’ with a new and putatively neutral one has been debated (Roksandic et al., 2021, 2022; Delson & Stringer, 2022; Sarmiento & Pickford, 2022).

As members of the International Commission on Zoological Nomenclature (ICZN), we feel compelled to present our official position regarding this topic and to clarify the role, mission and powers entrusted to the Commission.

And their decision (there’s more at the site):

Replacing accepted scientific names because of perceived offensiveness is not, and should not be, regulated by the Code. Although the Commission recognizes that some scientific names might cause discomfort or offence to parts of the community (such as eponyms of dictators or historical figures considered by some as racists, or because a word currently has negative connotations), the commitment to a stable and universal nomenclature remains the priority. It is well outside the scope of the Commission to assess the morality of persons honoured in eponyms or the potential offensiveness or inappropriateness of certain names. Owing to the inherently subjective nature of making such assessments, it would be inappropriate for the Commission to assert judgments on such matters of morality, because there are no specific parameters to determine thresholds for offensiveness of a scientific name to a given community or individual, either in the present day or in the future (but see Smith et al., 2022). There is also a possibility that neutral and non-offensive names proposed as replacements could themselves be considered offensive as attitudes change in the future, prompting further new replacement names. Moreover, any names replaced for ethical reasons would not simply disappear but would remain in the literature in perpetuity as part of taxonomic and nomenclatural synonymies.

Legislative changes accommodating the replacement of scientific names based on ethical considerations would affect the work of thousands of researchers, conservationists and other users of zoological names worldwide. Such disruptions would be particularly serious today, when the biodiversity of the world is increasingly under threat (Ceballos et al., 2017) and when conservation efforts will be particularly dependent on a universal naming and classification system that minimizes changes in names (Schuh, 2003). The establishment of a ‘Committee on Culturally Offensive or Inappropriate Names’, as suggested by Hammer & Thiele (2021) and Thiele et al. (2022), is outside the Commission’s purview and would be against the core principles of the Code, difficult to implement and unlikely to be recognized by the whole biological community.

. . . In conclusion, the stability of scientific names is essential for all activities under the umbrella of the biological sciences, including biodiversity conservation. The Commission acknowledges and understands ongoing debates about the appropriateness of certain names based on a variety of ethical arguments and is aware of the various proposed approaches on how to tackle these situations. However, the aim of the Commission is to promote nomenclatural stability without constraining taxonomic judgement. The ICZN’s current Constitution (https://www.iczn.org/) and its duties and powers as defined in the Code (ICZN, 1999), both of which have been ratified by the International Union for Biological Sciences (IUBS), preclude the Commission from adjudicating on the ethical merits of names or from establishing a skilled body dedicated to such a task. The Commission stands behind this and recommends the continued usage of scientific names as prescribed and regulated by the Code, thus promoting clear and unambiguous communication and essential linkages across the scientific literature as a top priority.

As you see, this is a purely practical decision, one that prioritizes the stability of biology and the ability of biologists to communicate internationally and accurately, above potential offense. But what people do with common names is out of their hands, and is often arguable.  Changing names like Homo sapiens, Drosophila melanogaster, and Atelopus coynei is not arguable!

Plant Latin names are recognized by a different organization, and I don’t think they’ve yet issued a statement about changing them.