In two previous posts (here and here), I described the movement to “cancel” the names of those birds  named after people who held views we find reprehensible today. Names given after people are called “eponymous” names.  Two of the eponyms that are being removed are any bird named after Audubon himself (he decapitated Mexican battlefield corpses for scientific study, though that was common practice at the time), and McKown’s Longspur, named after a Confederate general. No matter that McKown’s longspur was named for his contributions to ornithology, and named before the Civil War, not in honor of his fighting for the Confederacy, nor that McKown repudiated the Confederate cause later in life. No, his fighting for the wrong side was enough to get his name removed (the bird is now known as the “thickbilled longspur”).

Now there’s a move afoot to rename every eponymous bird, as recounted in the article below (click on screenshot), which appears on the Cornell University bird site, All About Birds.  (The bird shown, Bachman’s sparrow, is likely to be renamed because Bachman said some white supremacst things.) The renaming is because bird names are considered white and colonialist, and said to cause “harm.” 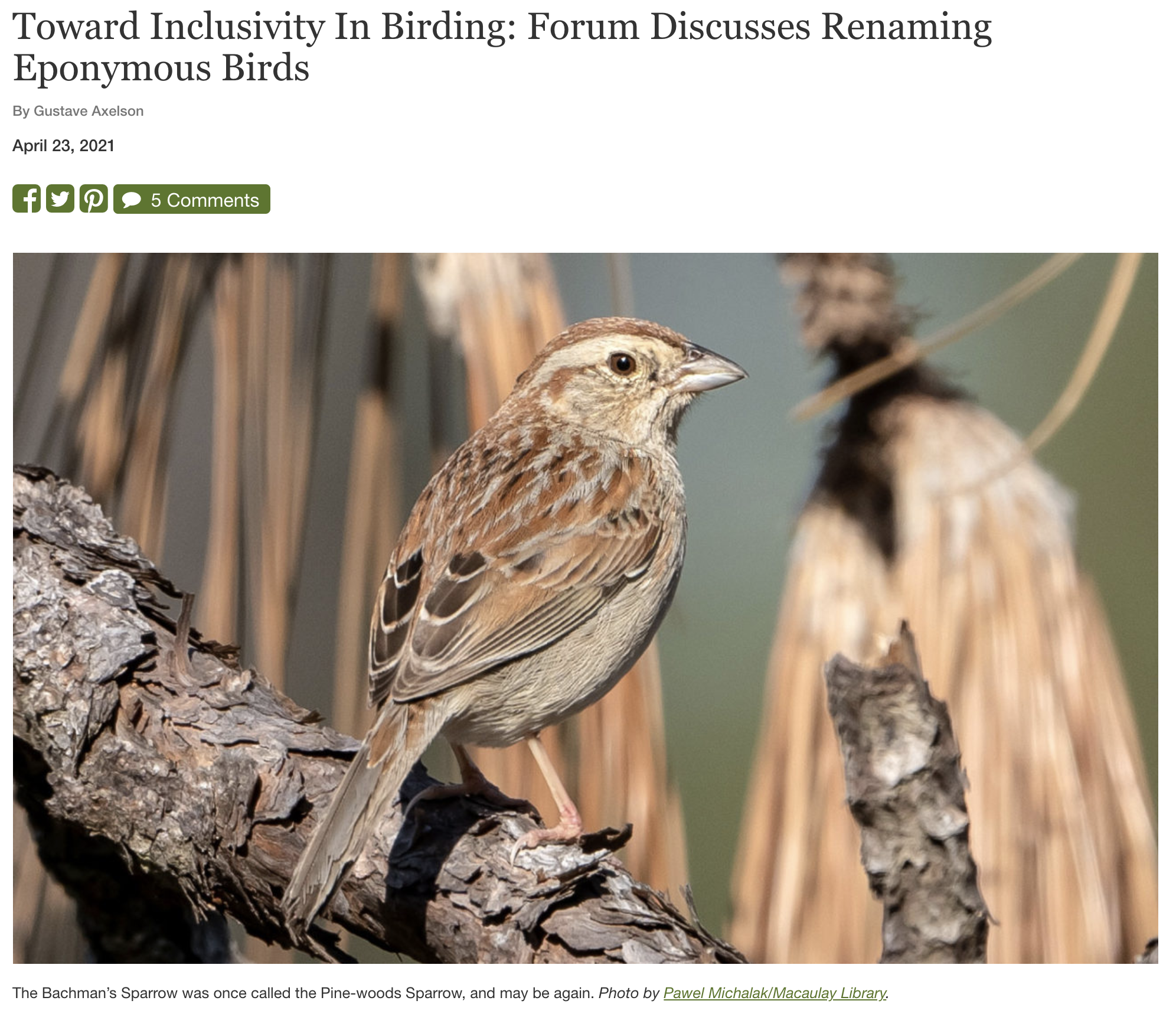 Note that renaming all these birds is going to be a big job, for the names they bear now are well ensconced in the literature, and there’s no way to go back and change them. It’s not like removing a monument or renaming a building. There are more than 100 eponymous bird species in North America alone.

Why are they trying to change all eponymous bird names? To me it seems like the paradigmatic case of performative wokeness. Although the avowed aims are to make birding more inclusive, not only getting people of color (I assume) to become birders, but to get more people interested in birds as a way to conserve them. Both aims are admirable; my beef is that renaming birds will do virtually nothing to accomplish those goals.  Here’s what the article said, mentioning a virtual panel discussion by The Community Congress on English Bird names.

The unanimous sentiment among the 15-person panel—which featured birders, scientists, field guide authors, and other experts from the U.S. and Canada—was that changes need to be made among more than 100 eponymous bird names for North American species to make birding more welcoming and inclusive to all.

. . .“Eponymous names don’t reflect the welcoming and inclusive community we know birding can be,” Rutter said [Jordan Rutter, a founder of the group Bird Names for Birds]. She said that she believes the current system for determining common bird names reflects colonialism in ornithological history. Nearly every North American bird name tied to a person can be traced back to a white American or European naturalist.

Note that every eponymous name needs to go. Not just names of Confederal generals or white supremacists, but every name. Why? Because most of those names “can be traced back to a white American or European naturalist”.  But most naturalists then were white. What’s the damage, then? It’s apparently that there is palpable harm caused to people by having to use or read those names. Referring to McKown’s Longspur, the article notes:

The change [to Thick-billed Longspur] was made after birders campaigned to remove McCown’s name from the bird, and after the classification committee revised its guidelines for bird names—adding considerations for “present-day ethical principles” when considering changing English common bird names that create “ongoing harm.”

And this is done to “improve the big landscape of racial and social injustice.”

Ongoing harm? Who claimed they were harmed beyond the idea of the woke birders that McCown’s name might create harm? Were there any Potential Birders of Color who said, “You know, I could get a lot more interested in birds, and engage in strenuous conservation efforts, if only I didn’t have to deal with that bloody name “McCown’s Longspur.”

This is both rhetorical and emotional inflation: a way for woke birders to feel that they’re accomplishing something when I have a strong feeling that they’re just doing something for show. If they want more birders of color, they should go to schools and excite the kids, they should help organize racially mixed birding groups, and (reflecting recent events), they should make clear that a black person with field glasses is more likely to be a birder than a murderer.

There is no evidence that I know of—and the articles present none—that eponymous bird names have created harm and social injustice. The very idea of that is almost laughable. But this is what scientists do when they want to show that they’re on the right side of history and don’t know how to really promote social change.

55 thoughts on “More on woke birding: changing the names of all birds named after people will at least create an inclusive birding community—and help conserve birds”