The latest gambit of Woke politics is to trawl back through everyone’s history, and, if you find something unsavory, that person must be canceled. Now sometimes this is okay, as when statues are taken down that honored Confederates, particularly postbellum statues meant to solidify the established system of segregation. (I’d prefer, however, that those statues be left in place with a prominent caveat.)

But when you do that with scientific names, it causes a problem.  Sometimes a “problematic” person is part of a species’ name, either the common name like Audubon’s shearwater (Puffinus lherminieri), or both the common name and the Latin binomial, like these birds: Audubon’s warbler (Setophaga auduboni), Townsend’s warbler (Setophaga townsendi), Hammond’s flycatcher (Empidonax hammondii) , and McCown’s longspur (Rhynchophanes mccownii). These names confer instant communication between birders and other biologists, and the Latin binomials are entrenched in the literature and can’t be changed without a taxonomic revision that shows why the name is somehow taxonomically incorrect (the species might, for example, have been previously described under another name).

I used these names because, in a new op-ed in the Washington Post, two birders have proposed canceling at least the common names of the species given above (and of course why not the Latin names?), for they’re named after people who did bad things in the past. (The authors are described as “ornithologists and birders who created the website Bird Names for Birds.”)

As the authors argue:

Eponymous [species] names serve as verbal statues: They are a memorial both to the colonial system that wove the fabric of systemic racism through every aspect of our lives — including the birds we see every day — and to the individuals who intentionally and directly perpetuated that system.

Sorry, but there is not “systemic racism” in every aspect of our lives, and when you see sentences like that, you should push back. But onward:

Click on the screenshot to learn which names must be canceled and changed, and why:

I’ll just give you the misdeeds that have damned Audubon, while the others are recounted in the article (my emphasis):

Few figures tower over the study of American nature like John James Audubon — and small wonder. His “Birds of North America” was the first work to catalog most of the continent’s native species in vivid color, introducing them to a wide and enthusiastic audience that endures today. He also described an astonishing 25 new bird species, while two other species — Audubon’s shearwater and Audubon’s oriole — bear his name. Surely, most of us might think, this is an entirely fitting honor for someone who did so much for our understanding of the environment.

Yet science never exists in a vacuum, and Audubon’s story has a dark side — one that goes beyond his notable penchant for exaggeration and scientific fakery. After the Battle of San Jacinto in 1836, when mostly White Texans defeated a Mexican army not far from present-day Houston, Audubon scoured the battlefield for the remains of Mexican soldiers. He decapitated several bodies and sent the heads to Samuel George Morton, a notorious practitioner of phrenology, a pseudoscience that attempted to use skull dimensions to prove the superiority of White Europeans to other races. For Audubon, this might have been just another way of practicing science — but his actions hardly align with modern values, and his scientific contributions do not excuse him from judgment.

And of course who are those empowered to give “judgment”? Why Foley and Rutter, of course! Did you think that somebody else should decide? Twitter?

So we get this (there are five illustrations like this, all by Sergio Peçanha for The Washington Post): 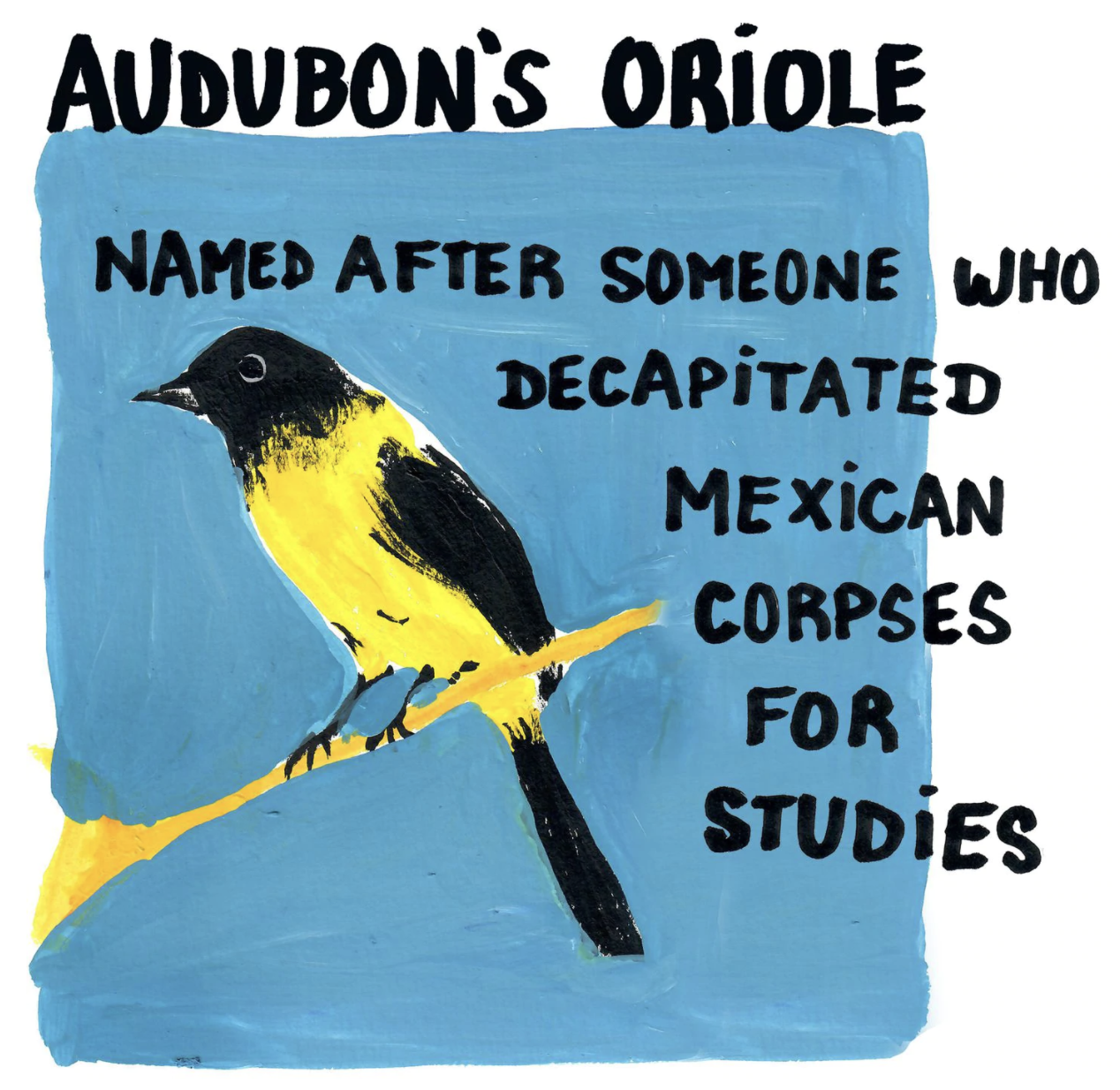 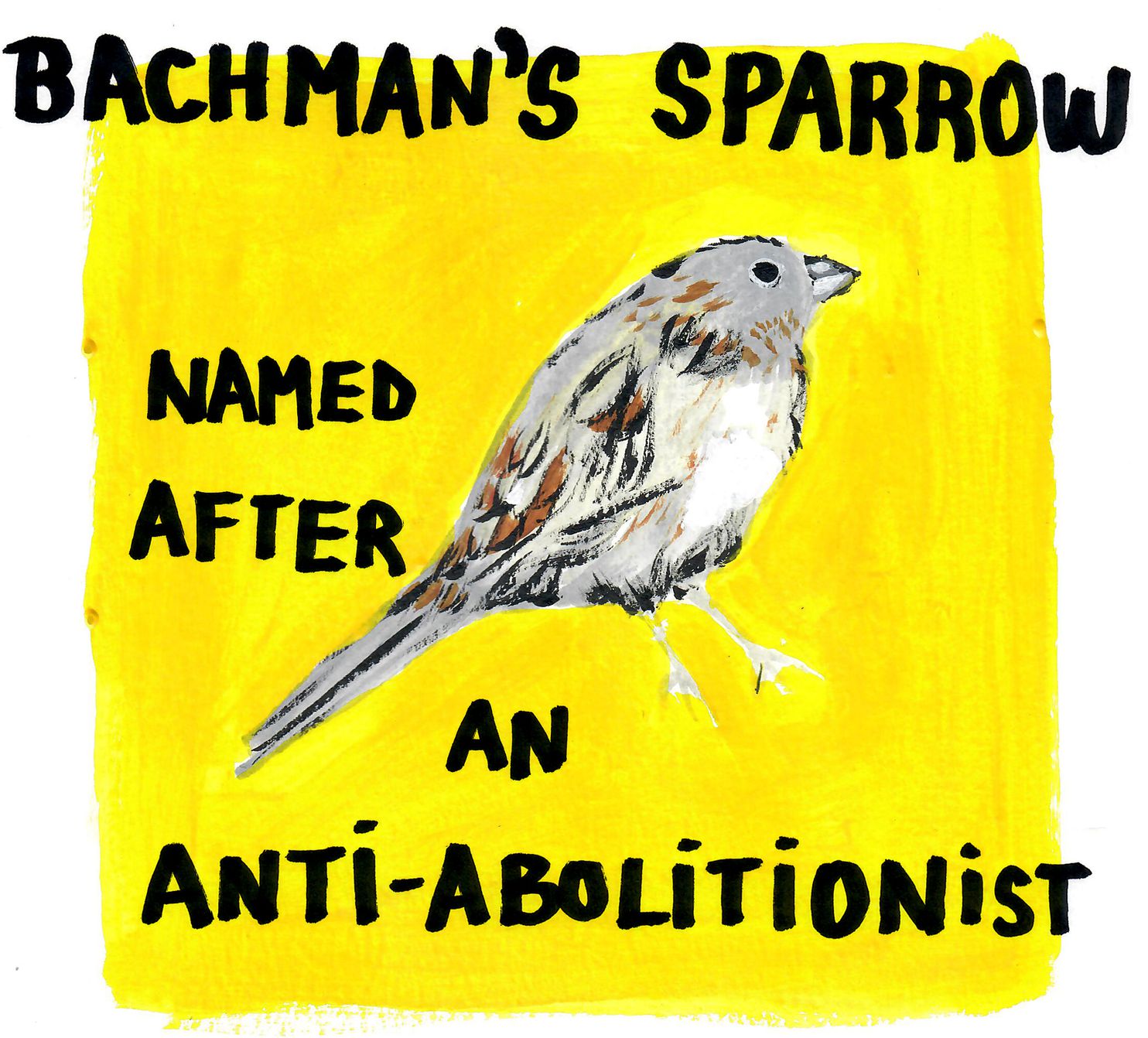 One reaches a point (and I am there now) where this kind of renaming has its downside—in this case, impeding scientific communication. The upside, which is somehow seen as perpetuating racism (seriously? Does this do that?), has to be balanced against the palpable confusion of renaming not just these bird species, but every species on Earth named after someone “whose actions don’t align with modern values.” That is, if there even exists an upside, and here I can’t see a meaningful one.

The fact is that even our own actions today won’t align with moral values in 150 years. For example, those who kill animals for food, or run meat-packing or meat-selling operations (I’m looking at you, Colonel Sanders), might be seen as barbarians in a future when we can produce meat in Petri dishes—if we even want it.  Yes, there are some people who should not be memorialized, and if they were, the names should be removed. I wouldn’t fight the removal of an Adolf Hitler Hochschule in Germany, of course.

But there are degrees of justifiable cancellation, and renaming long-established animal species is, for me, beyond the line of “unacceptable”. Others may feel differently, but when I ask Grania’s Question: “Does the proposed change palpably change society for the better?”, I have to say no. Taxonomic pecksniffery is a waste of time, and I feel sorry for those who feel it’s an important endeavor. It does nothing to ameliorate or eliminate racism. It is virtue flaunting, pure and simple. (I guessed that both authors were white, and I was right.)

By the way, Andrew Sullivan referred to this in his latest Weekly Dish as a “Woke Alert”, and he said this, reproducing the birders’ tweet (my emphasis in the text):

A reader flags an Onion-like article from the WaPo and writes:

As an academic and biologist who has written a preprint on bird taxonomy, I found your summary of critical theory helpful in understanding a very vocal movement among my peers to get rid of eponymous English names for birds. This week, that movement took its goals to the broader public square.

Money quote from the op-ed:

We cannot subjectively decide — especially if the adjudicators are White — that some names can be retained because they are associated with less abhorrent pasts than others. We must remove all eponymous names. The stench of colonialism has saturated each of its participants, and the honor inherent within their names must be revoked.

Our reader adds, “the op-ed was promptly and roundly set on fire in the comments section.” Dish fave: “First they came for the bird names, and I did not tweet … ”

I have to say that that comment made me laugh out loud. There are now 711 comments on this op-ed in the paper, the vast majority making fun of or criticizing the piece. I keep hoping that the tide is finally turning against this kind of extreme policing of history.

70 thoughts on ““First they came for the bird names. . .” Woke craziness creeps into bird taxonomy”