In Why Evolution is True, one of the most telling pieces of evidence I adduce for evolution is the existence of dead (nonfunctional or “vestigial”) genes found in the DNA in living species. For example, mammals like us carry three dead genes for making egg yolk. Evolution has rendered them nonfunctional, as mammalian embryos are nourished through the placenta, but they’re still there in the genome, rendered useless by mutations.

The genome of nearly all animals we know is a veritable graveyard of dead genes. These, like our egg-yolk genes, constitute irrefutable evidence for evolution. They’re still there because we inherited them from a common ancestor, but evolution usually inactivates unneeded genes not by snipping them out of the genome, but by allowing “inactivation” mutations to kill the genes’s production of protein. (Alternatively, inactivation can occur by killing off a promoter gene that causes a gene to be transcribed.) The genes just sit there, “silent signs of history.”

Both types of dead genes were found in this new eLife paper, and they are genes normally promoting the growth hair in the relatives of species that have lost most of their hair. That the genes are still there, but are nonfunctional, simply can’t be explained by anything other than common ancestry. That’s why creationists, like the chowderhead I’ll highlight in the next post, ignore them. (Similarly, they ignore the evidence for biogeography of oceanic islands—also explained in Why Evolution is True—because there’s no creationist explanation save “Well, God wanted things to look like they’d evolved.”)

This is a long and complicated paper from eLife, but the popular version in Science Alert, shown below that, is not sufficiently detailed. I’ll try to simplify the eLife paper but give more information than the popular precis.

The pdf for the eLife paper is here, and the reference is at the bottom.

The short take: the authors sequence a handful of relatively hairless species that descended from ancestors that had hair, looking for genes in common to these set that a. were likely involved in producing hair, but b. had been inactivated in these species by “relaxation of selection”. That is, there was no longer natural selection in these species to maintain a coat of hair (and good reason not to), and so mutations inactivating the genes–and their controlling elements–accumulated.  Further, natural selection can accelerate this trend by favoring gene variants that reduce hair, either because regular genes that make hair use up metabolic energy that isn’t needed and, more likely, that hair is an impediment to their lifestyle.

The interesting thing about the paper is that, by sequencing the DNA of relatively hairless species, they found sets of genes in common among the hairless species, implying that there were common evolutionary-genetic pathways for hair reduction. This is what’s called convergent evolution, which usually refers to similar appearances of organisms that have similar lifestyles but aren’t closely related—like the marsupial mole and the placental mole—but in this case it’s convergence at the level of genes.

Here are the species they looked at:

. . and a subset of all species studied showing their evolutionary relatedness. I love the example they use for humans:

Most of these animals have some hair, but the authors conjecture, with reason, that their ancestors were much hairier. This is likely to be true, though the elephant and manatee had a recent common ancestor and it’s not clear whether their hairlessness evolved twice. The authors support this by adducing the existence of the hairy mammoths as animals more closely related to the modern elephant, implying that the ancestral pachyderm was hairy. But hairy elephants could have represented the re-evolution of hair in a relatively hairless ancestor. Likewise with the dolphins and orcas; I’m not sure how these two, which are fairly closely related marine mammals, could be taken as independent losses of hair. (On the other hand, the walrus, less closely related, could have lost its hair independently).

They also looked at 52 other species, for you need a comparison of DNA sequences in hairy animals. The figure above shows some of the hairy species whose DNA was sequenced (they looked at a lot of genome: nearly 20,000 coding genes and 350,000 regulatory regions).

Surprisingly, they found a fair number of genes that lost function (or had “relaxed selection”) in all of the hairless species. Not all of the genes had a known function, but most were associated with hairs themselves, the hair follicles,or the dermal papillae, the crucial structures that allow hair to grow.  Here’s a list of five genes and a table of the likelihood that they would have changed so rapidly in all the species. The colors show where the genes act.

Note that both coding (genes) and noncoding (controlling-element) DNA was involved; in fact, among all the genes identified as likely contributors to hairlessness, there were more noncoding changes than coding changes, which is often what we find when either new structures evolve or old structures are lost. I used to think—and wrote a controversial paper about this with Hopi Hoekstra—that structural (coding) genes were more important in evolutionary change, but the data show that it might be the other way around. In other words, Hopi and I may have been wrong.

Now the paper is long and complicated, and bits of it are beyond my pay grade, but I do have a few comments. First, the significance levels they use to ascertain common evolution of genes among the set of relatively hairless species are not that small. They even highlight genes, as you can see above, with adjusted probability values above 0.05; conventionally these would be considered “nonsignificant”. I’m not sure why they did that. However, as you can see from the table above, some of the adjusted probabilities were very, very small: the p value for noncoding sequences in the hair cortex is, for instance, 0.000003. I’m confident that they did at least find some genes that changed rapidly in the entire group of hairless species.

Second, they’re not sure in some cases that the rapid gene evolution was indeed associated with loss of gene function. You can tell this for coding genes because there will be a “stop codon” or a “nonsense codon” in the DNA sequence that will code for mRNA that makes a nonfunctional protein.  They don’t talk about this in detail, but simply use “rapid evolution” as an index of nonfunctionality. (I may have missed something.)

Finally, for pairs like the elephant and manatee on one hand and the dolphin and orca on the other, I don’t have a lot of confidence that their loss of hair occurred independently.

Nevertheless, we can have confidence, given the low probability values, that some structural and controlling DNA has evolved independently in a group of hairless species, causing them to lose hair. That’s a case of convergent evolution of genes that is quite novel.

Oh, I forgot to mention why these species lost hair. In our species, it probably happened to promote easier cooling of our bodies via sweating as we evolved into upright creatures on the savanna. This probably also holds for rhinos and elephants, especially because elephantine species in northern climes, like mammoths, were hairy. In marine mammals it’s obvious: hair is useless for insulation, and is just an impediment to swimming. As for armadillos and pigs, it’s anybody’s guess. Wild pigs are pretty hairy (at least the ones I’ve seen), but armadillos have shells, and that serves to insulate the animal (they do have hair on their bellies, but it’s sparse). 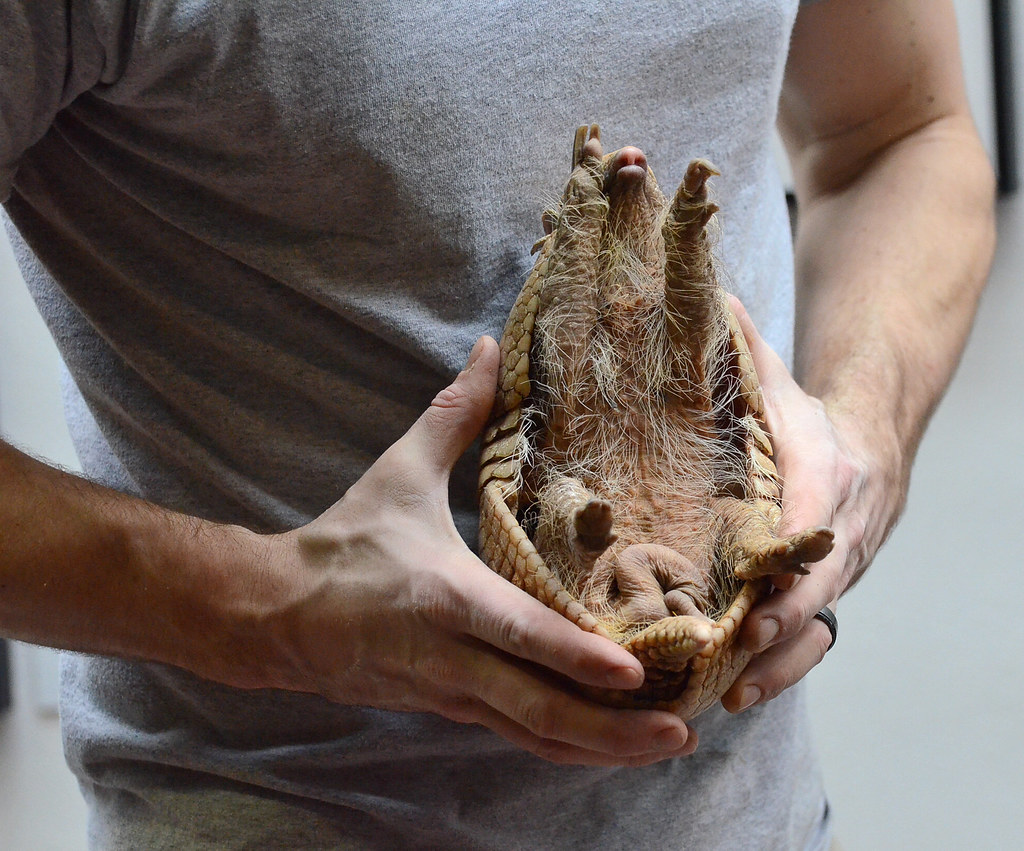 THE UPSHOT:  These are likely cases of “vestigial genes,” though the cases would become textbook examples if they knew exactly what the genes did and, importantly, could show without doubt that they have been inactivated in the hairless species. Those data will come some day, but in the meantime I prefer to cite the broken egg-yolk genes in mammals: remnants of genes that produced nutrients for the embryos in our reptilian, fishy, and amphibian ancestors. That is a very solid case.

You can read the “popular” take below:

41 thoughts on “Evidence for evolution: Hairless animals have dead genes for a full coat of hair”