While I believe there are ways to increase equal opportunity for groups  that havehistorically been held back in America, requiring DEI statements (diversity, equity, and inclusion) for admission to graduate schools or hiring and promotion of professor is not such a way.  While those initiatives may increase representation or “equity” if used as criteria of “merit”, but they won’t solve the problem of constricted opportunity, which, after all, is the goal—or is supposed to be. The goal of those who promote DEI is simply “equity,” or proportional representation, and without equal opportunity, the goal may be misguided if different groups have the different preferences and desires. And, at any rate, the obsession with DEI will lead to a perpetual focus on ethnicity, which I don’t think anyone wants—except the many people who hold DEI-related jobs.

The piece below by John Sailer appeared yesterday on Bari Weiss’s new Substack site, The Free Press, and its point is made in the title and subtitle. The piece will appeal to those who think the mission of universities is seeking the truth, providing education, and promoting critical thought, but not to those who feel that the purpose of a university is to foster “progressive” (i.e., illiberal Left) politics.

I’ve already argued at length about the proliferation and dangers of DEI, so I’ll simply give a few pieces of information from the article that show how DEI is burrowing deeper into the American academia. I find some of these data frightening, but am glad that I’m retired and don’t, for example, have to rank grad students or job candidates according to their adherence to an “approved” version of DEI. 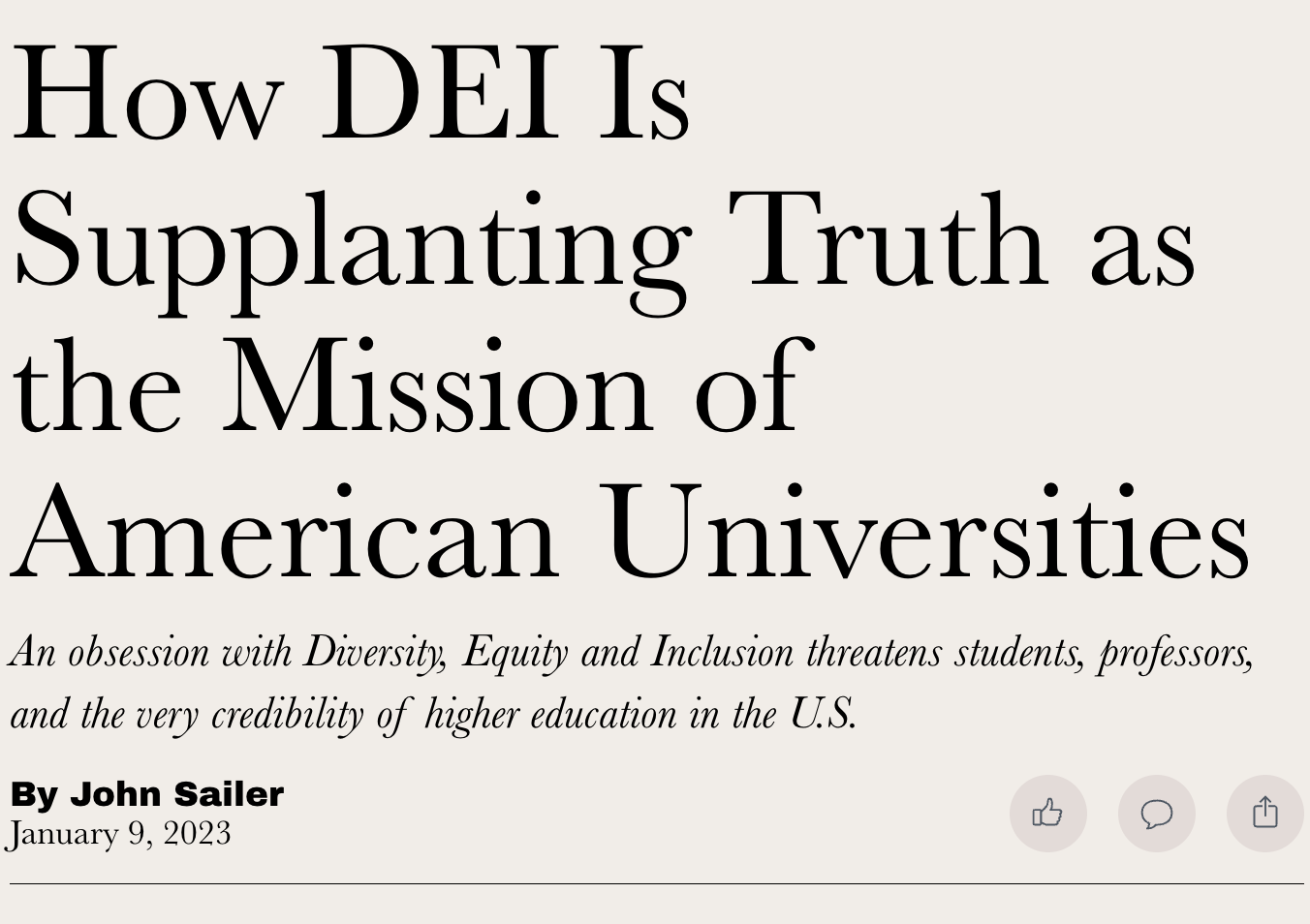 a.) The treatment of a “colorblind” instructor at UCLA. As we know, Dr. King’s statement about judging people by their character—or, for me, by their merit when merit is important for deciding who to choose—is now in bad odor, and the color of one’s skin has become vitally important. Here’s one case:

In June 2020, Gordon Klein, a longtime accounting lecturer at UCLA, made the news after a student emailed him asking him to grade black students more leniently in the wake of the “unjust murders of Ahmaud Arbery, Breonna Taylor and George Floyd.”

Klein’s response was blunt. It stated in part:

Thanks for your suggestion in your email below that I give black students special treatment, given the tragedy in Minnesota. Do you know the names of the classmates that are black? How can I identify them since we’ve been having online classes only? Are there any students that may be of mixed parentage, such as half black-half Asian? What do you suggest I do with respect to them? A full concession or just half?

Remember that MLK famously said that people should not be evaluated based on the “color of their skin.” Do you think that your request would run afoul of MLK’s admonition?

Klein’s response enraged students. They organized a petition to remove him that quickly gained nearly 20,000 signatures, resulting in the professor being placed on leave and banned from campus. But the story got national attention, and a counter-petition signed by more than 76,000 people demanded his reinstatement. In less than three weeks, Klein was allowed to return to the classroom.

Yet his encounters with what UCLA calls Equity, Diversity and Inclusion were far from over.

Just under a year later, Klein, the author of a textbook on ethics in accounting, was up for a merit raise. For the first time in his 40 years at UCLA, Klein told me he had to submit a statement on equity, diversity, and inclusion. UCLA had adopted this as a promotion requirement in 2019, and now demands that all faculty members express how they will advance these principles in their work, and how their mentoring and advising helps those “from underrepresented and underserved populations.”

. . . Although his previous teaching evaluations were sterling, and he had received prior merit raises, this one was declined. Klein has brought suit against UCLA.

b.) The change in academic priorities. Equity has now become as important as, or even more important than, merit. The two are somewhat in conflict, for if they weren’t, there wouldn’t be DEI initiatives. Remember that it was Hamline Universities “Office of Inclusive Excellence” (a namely clearly confected to obscure the conflict) which was driving the effort to oust the professor who showed ancient Muslim paintings depicting Muhammad’s face. That office clearly places “lack of offense” above education.

. . .the concepts of DEI have become guiding principles in higher education, valued as equal to or even more important than the basic function of the university: the rigorous pursuit of truth. Summarizing its hiring practices, for example, UC Berkeley’s College of Engineering declared that “excellence in advancing equity and inclusion must be considered on par with excellence in research and teaching.” Likewise, in an article describing their “cultural change initiative,” several deans at Mount Sinai’s Icahn School of Medicine declared: “There is no priority in medical education that is more important than addressing and eliminating racism and bias.”

DEI has also become a priority for many of the organizations that accredit universities. Last year, the Council for Higher Education Accreditation, along with several other university accrediting bodies, adopted its own DEI statement, proclaiming that “the rich values of diversity, equity and inclusion are inextricably linked to quality assurance in higher education.” These accreditors, in turn, pressure universities and schools into adopting DEI measures.

c.) DEI becomes an undergrad course requirement and even a college major.

Many American college students are now required to take DEI, anti-racism, or social justice courses. At Georgetown, all undergraduates must take two Engaging Diversity courses. At Davidson College, the requirement goes under the title of Justice, Equality, and Community, which students can fulfill by taking courses like Racial Capitalism & Reproduction and Queer(ing) Performance. Northern Arizona University recently updated its general education curriculum to require nine credit hours of “diversity perspectives” courses, including a unit on “intersectional identities.”

DEI is also becoming a de facto academic discipline. In 2021, Bentley University in Massachusetts created a DEI major. Last year, the Wharton School announced its introduction of a DEI concentration for undergraduates and a DEI major for MBA students.

d.) The infusion of DEI into the sciences.

The federal government also is doing its part to infuse DEI into the sciences. The Department of Energy’s Office of Science is the nation’s largest sponsor of the physical sciences. It recently announced that all new research proposals must include its Promoting Inclusive and Equitable Research (PIER) Plan. To get a grant, scientists must describe how equity and inclusion are “an intrinsic element to advancing scientific excellence in the research project.”

One medical researcher at an elite institution who requested anonymity told me that grants for medical research increasingly use veiled ideological language that focuses on issues such as health equity and racial disparities. “The answer is preordained: The cause of disparities is racism,” he told me. “If you find some other explanation, even if it’s technically correct, that’s problematic.”

e.) “Cluster hiring”.  This is one method that universities may employ more widely when the Supreme Court strikes down affirmative action next year. Race-based hiring is, of course, already illegal, but this is a model of how to circumvent legal strictures.

To boost faculty diversity (explicit racial preferences in hiring are illegal), many universities are resorting to a practice known as “cluster hiring”—that is, hiring multiple professors at once, across multiple departments. To increase the likelihood of hiring minority faculty members, cluster hiring initiatives often assess candidates’ contributions to DEI as the first criterion.

In 2018, UC Berkeley launched a cluster hire across several life sciences departments. Of 893 qualified applicants, the hiring committee narrowed the pool to 214 based solely on the candidates’ diversity statements. Finalists then were asked to describe their DEI efforts during their interviews. The initiative yielded eyebrow-raising results: The initial applicant pool was 53.7 percent white and 13.2 percent Hispanic. The shortlist was 13.6 white and 59.1 percent Hispanic.

In 2020, the National Institutes of Health (NIH) began a $241 million cluster hiring grant program—specifying that the faculty hired must have “a demonstrated commitment to promoting diversity and inclusive excellence.” So far, it has awarded grants for hires at twelve institutions, including the University of South Carolina, Cornell University, and Florida State University.

Of course there’s nothing wrong with hiring groups of faculty all at once, even with the hope that multiple hires will increase diversity, but what is wrong is to use that process by judging with “hireability” with adherence to DEI standards, as Berkeley is doing.

As the article points out, and as many already know, these initiatives, often promoted by a small group of people who manage to get power by intimidating others (to oppose DEI requirements is to open yourself up to accusations of racism and bigotry), have led to self-censorship of faculty and students. Below are the results of a 2020 FIRE survey summarized in Inside Higher Ed. It shows the proportion of undergrads at 55 American colleges and universities who would feel “very comfortable” expression controversial opinions. All the numbers are at 25% or below. (For a critique of this survey, though, see here.)

This figures will never approach 100% because some students are simply too shy or introverted to risk an argument, but who could deny that this shows that speech on campus is being chilled? And that is in part because of the authoritarianism evinced in DEI initiatives: there’s only one way to think, and if you express Wrongthink, your chances of getting into grad school, getting a good job, or getting tenure are reduced. 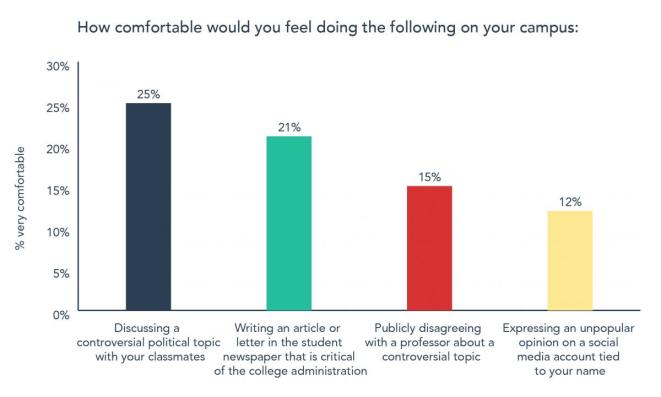 I’m not aware of any formal surveys of faculty self-censorship (if you know of any, report in the comments), but I suspect, based on the increasing number of reports of faculty getting fired after being reported for saying the “wrong thing”, and on my “lived experience” talking to colleagues, it’s a serious and increasing problem.  Although I can use this website to promulgate some of my own opinions that may be unpopular, I can tell you that I, too, self-censor in my University and my department, simply because I don’t want to be ostracized. That doesn’t mean I hold Nazi or white supremacist views, of course, but if I didn’t fear ostracism, there are some initiatives I would criticize more strongly if I felt more free. This are mostly issues of free speech.

18 thoughts on “Truth vs. equity: a piece by John Sailer”