Greetings on the cruelest day: Tuesday, December 27, 2022. It’s the Third Day of Coynezaa, as well as the third of the Twelve Days of Christmas (Western Christianity). What a coincidence!  Foodwise, it’s National Fruitcake Day, celebrating the single fruitcake that circulates endlessly around America. 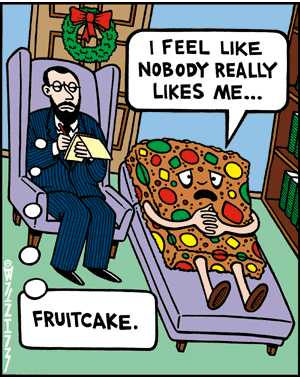 Readers are welcome to mark notable events, births, or deaths on this by consulting the December 27 Wikipedia page.

*The NYT’s news analysis says that Russia seems to have reached the limits of its on-the-ground military capabilities, and will have to continue the war in the air. I’m not sure what that means for Ukraine, which now faces being bombed to hell, but for a big country like Russia to run out of conventional options, well, that’s not good optics.

Ukraine is striking more boldly at targets deep in Russian territory because Kyiv has assessed that Moscow’s military is fighting at the limits of its conventional capabilities, former military officials and analysts say.

So far, the Ukrainian long-range attacks that hit airfields in the heart of Russia, along the Volga River, have not caused extensive damage. The latest, on Monday, killed three servicemen, Russia’s Defense Ministry said, after air defenses shot down a Ukrainian drone approaching Engels air base, near the city of Saratov.

But the attacks, which remain sensitive enough that the Ukrainian government has not publicly acknowledged them, have forced Russia to move planes, potentially complicating Moscow’s campaign of aiming cruise missile strikes at Ukraine’s energy grid.

Since some cruise missiles are launched from bombers that fly from the airfields hit in the attacks, the strikes could potentially destroy the missiles on the ground at the Russian airfields before they can be deployed.

With the sense widespread in Kyiv among officials and civilians that, short of nuclear intensification, Russia cannot do much more to Ukraine that it is not already doing, the allure of curtailing Moscow’s missile capabilities at home outweighs any escalatory concern.

. . .The United States and Ukraine have agreed that Kyiv will not strike targets in Russia with American-provided weaponry. The Biden administration has vowed to avoid American involvement that could escalate to direct confrontation with Russia. But American officials clarified they will not object to Ukraine striking back with its own weaponry.

I’m amazed that Ukraine still has the capability to make its own long-range drones! You go, Zelensky(y)!

*The Washington Post reports that the pandemic has changed the restaurant business—perhaps forever. I’ve already noticed that when I go to one of my standby restaurants, fewer people are eating in, and many of my friends, when I urge them to try a place, assume they’ll be eating takeout.

“We are going to see a hollowing-out in the restaurant world,” said Laurie Thomas, owner of two restaurants in San Francisco and executive director of the Golden Gate Restaurant Association.

“We will end up with the super expensive, bespoke opportunities that you’re paying through the nose for, and then you’re going to have the fast casual restaurants. The middle restaurants will be much fewer. It won’t be an economically viable part of the industry going forward,” she said.

Independent restaurants may suffer most, but some restaurant groups that may have difficulty with culture change are in the category of sit-down family dining like the name-brand stalwarts you might find circling a suburban mall that are less about “an experience or uniqueness.”

But those are some of my favorite place: home-style cooking, usually of the ethnic stripe. And for me even eating there is a treat: relaxing, enjoying the ambiance, and being served. On the way out. There’s more:

Restaurants are still seeing 16 percent fewer people dining on-premises compared to before the pandemic. Off-premises dining, however, has picked up precisely that much, according to the National Restaurant Association. But how that breaks down is telling: Delivery is up more than 5 percent while carryout is down 3. The big winner? Drive-through, up 13 percent.

At this moment, 39 percent of all restaurant traffic is bumper to bumper in a drive-through lane, said Hudson Riehle, an economist for the National Restaurant Association.

Drive-through? That’s exactly what I don’t want. Even at In and Out Burger, I always go inside and sit down. Eating out is a time to relax, not get in your car, rush out, rush home with cold food, and nosh. Oy, my kishkes!

*My friend Asra Nomani, a reliable reporter who used to work for the WSJ, wrote an article about how Thomas Jefferson High School of Science and Technology in Alexandria, Virginia pulled what is known as a “rookie move” (TJ, as it was known in my day, was one of our high-school sports rivals. In the name of equity, which apparently justifies all manner of academic malfeasance, the school is hiding students’ own accomplishments—from them!  The purpose: so no student looks better than any other. (h/t Enrico)

For years, two administrators at Thomas Jefferson High School for Science and Technology (TJ) have been withholding notifications of National Merit awards from the school’s families, most of them Asian, thus denying students the right to use those awards to boost their college admission prospects and earn scholarships. This episode has emerged amid the school district’s new strategy of “equal outcomes for every student, without exception.” School administrators, for instance, have implemented an “equitable grading” policy that eliminates zeros, gives students a grade of 50 percent just for showing up, and assigns a cryptic code of “NTI” for assignments not turned in. It’s a race to the bottom.

An intrepid Thomas Jefferson parent, Shawna Yashar, a lawyer, uncovered the withholding of National Merit awards. Since starting as a freshman at the school in September 2019, her son, who is part Arab American, studied statistical analysis, literature reviews, and college-level science late into the night. This workload was necessary to keep him up to speed with the advanced studies at TJ, which US News & World Report ranks as America’s top school.

Last fall, along with about 1.5 million US high school juniors, the Yashar teen took the PSAT, which determines whether a student qualifies as a prestigious National Merit scholar. When it came time to submit his college applications this fall, he didn’t have a National Merit honor to report — but it wasn’t because he hadn’t earned the award. The National Merit Scholarship Corporation, a nonprofit based in Evanston, Illinois, had recognized him as a Commended Student in the top 3 percent nationwide — one of about 50,000 students earning that distinction. Principals usually celebrate National Merit scholars with special breakfasts, award ceremonies, YouTube videos, press releases and social media announcements.

But TJ School officials had decided to withhold announcement of the award. Indeed, it turns out that the principal, Ann Bonitatibus, and the director of student services, Brandon Kosatka, have been withholding this information from families and the public for years, affecting the lives of at least 1,200 students over the principal’s tenure of five years. Recognition by National Merit opens the door to millions of dollars in college scholarships and 800 Special Scholarships from corporate sponsors.

I learned — two years after the fact — that National Merit had recognized my son, a graduate of TJ’s Class of 2021, as a Commended Student in a September 10, 2020, letter that National Merit sent to Bonitatibus. But the principal, who lobbied that fall to nix the school’s merit-based admission test to increase “diversity,” never told us about it. Parents from earlier years told me that she also didn’t tell them about any Commended Student awards. One former student said he learned he had won the award through a random email from the school to a school district email account that students rarely check; the principal neither told his parents nor made a public announcement.

*The New York Times asks “What’s your trigger?” In a series of 24 questions, they’ll suss out exactly what makes you angry. Here, for example, is the first question: 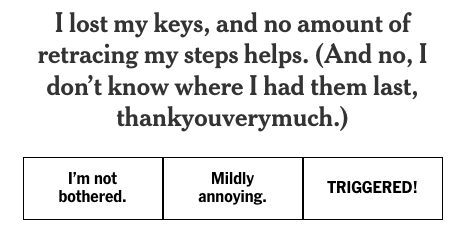 Now THIS one triggers me: nothing makes me antsier than misplacing my wallet, keys or cellphone Ithe wallet is the worst, but I’ve only misplaced it for a couple of hours.

So I took all 24 questions and here’s my report:

That sounds about right. And nobody is harder on me than I am!

*Finally, five of the AP’s “best photos of the World cup.” More at the site.

Meanwhile in Dobrzyn, Hili is asking the Big Shakespearian Question:

A: What are you thinking about?
Hili: Whether to sit here or to go to sleep. 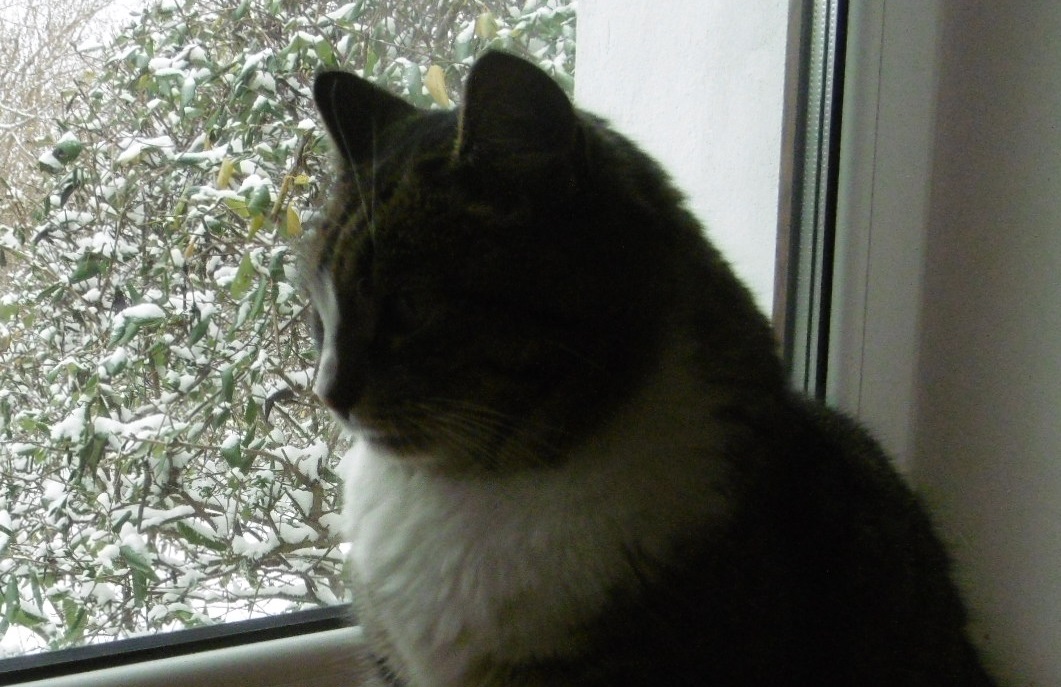 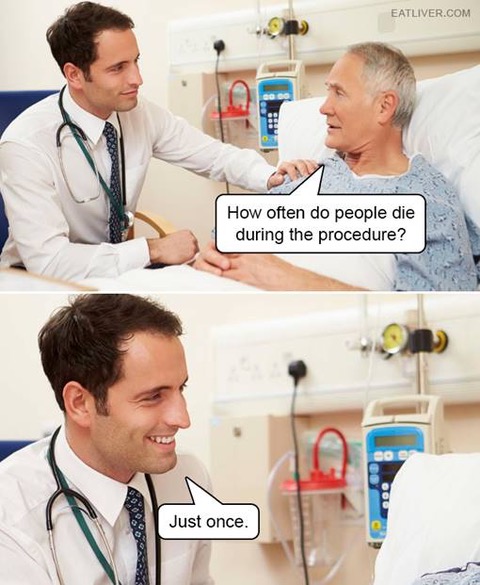 From Elsie: Messi and a good-luck kitty:

From Gary, a Maria Scrivan cartoon: 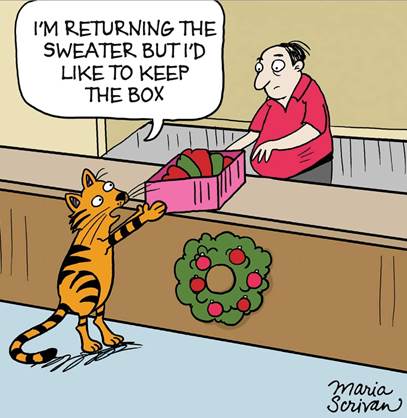 From Masih, another impending execution in Iran, apparently on frivolous grounds:

We just learned that why the Islamic Republic executed #MajidrezaRahnavard with a broken hand.
Because his hand was tattooed with Iranian Lion and the Sun flag. In 1980, Islamic Republic replaced the Lion and Sun on the country’s tricolor flag with a tulip shaped emblem Allah. pic.twitter.com/MtNe1wUqMg

From Malcolm, a fun thought exercise:

What would be left of the world's oceans if we pulled a 10m plug in the Marianas Trench emptying the water? Silly exercise but great to watch!

She was deported to #Auschwitz from #Theresienstadt ghetto on 6 October 1944. She did not survive. pic.twitter.com/lDWdgAVlUS

Tweets from Professor Cobb. First, Larry the Cat (the Head Mouser) speaks up:

Today we celebrate Boxing Day in the UK, so named because cats spend the day exploring empty boxes discarded from Christmas Day*

*This may not be true pic.twitter.com/nD8ptVKB4W

Just what you wanted to know!

Here is an edifying figure: the contribution of astronaut farts to the internal atmosphere of six Space Shuttle missions.

Matthew says, “I don’t watch Tik Tok at all but some of these are very good.” Here are three:

I watch a lot of TikToks (you might have noticed). Here are my favourite ten from the year ✨

6. And while the tortilla challenge wasn’t as good, it did produce these ten seconds of pure chaos. pic.twitter.com/7QAVqEKBtz