Welcome to Thursday, December 15, 2022: National Lemon Cupcake Day, which is better than no cupcake (but barely). 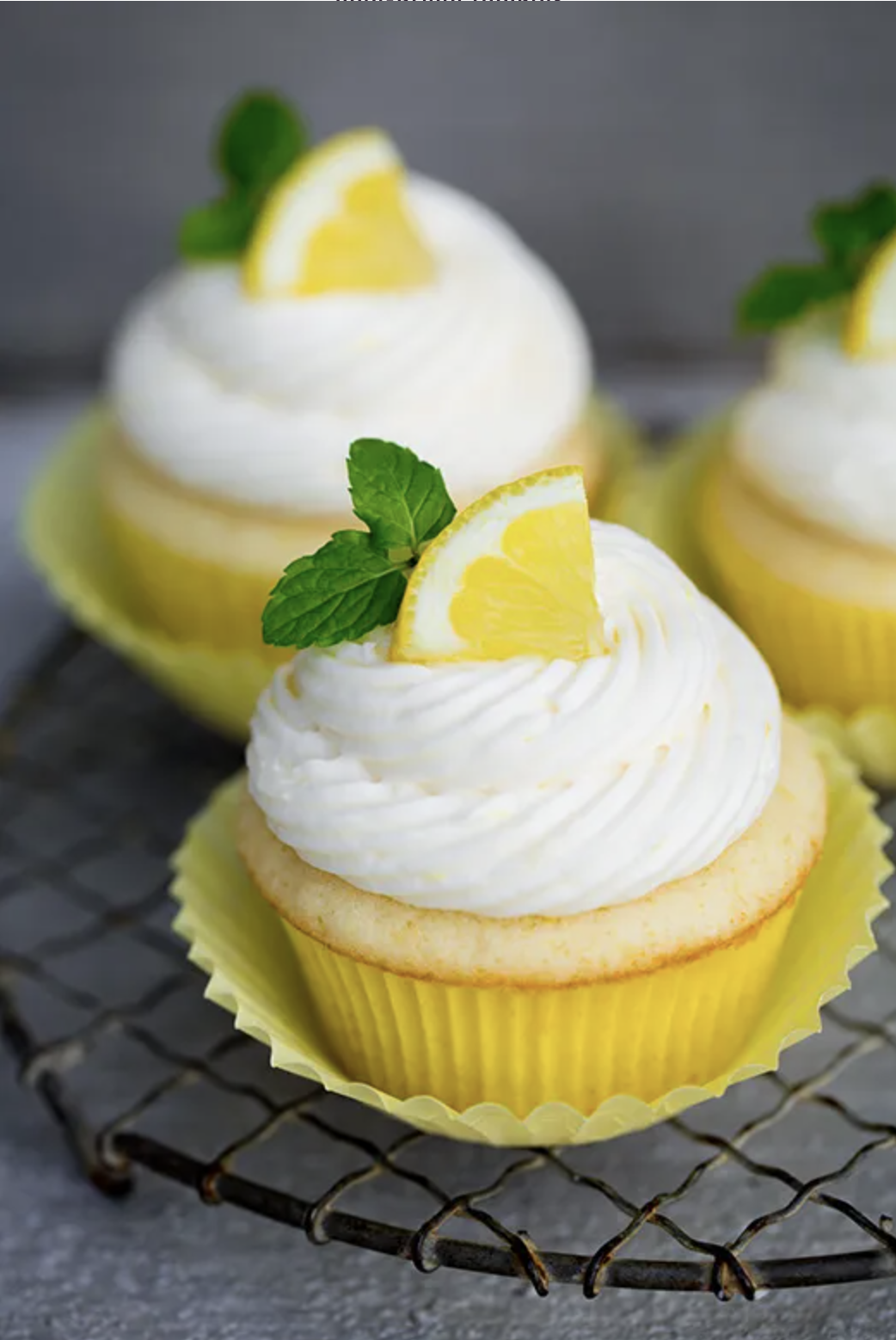 It’s also International Tea Day, Bill of Rights Day (the first ten amendments were ratified by Virginia on this day in 1791), and Cat Herders’ Day.  That reminds me of this commercial: in my view, the best ad ever televised. Watch it several times, as you’ll miss things:

Finally, it’s Zamenhof Day, the birthday of L. L. Zamenhof, who created the language Esperanto in hopes that it would become the Universal Language. He failed, but some 100,000 weirdos can still speak it, and I even tried when I was a kid. Here’s Zamenhof: 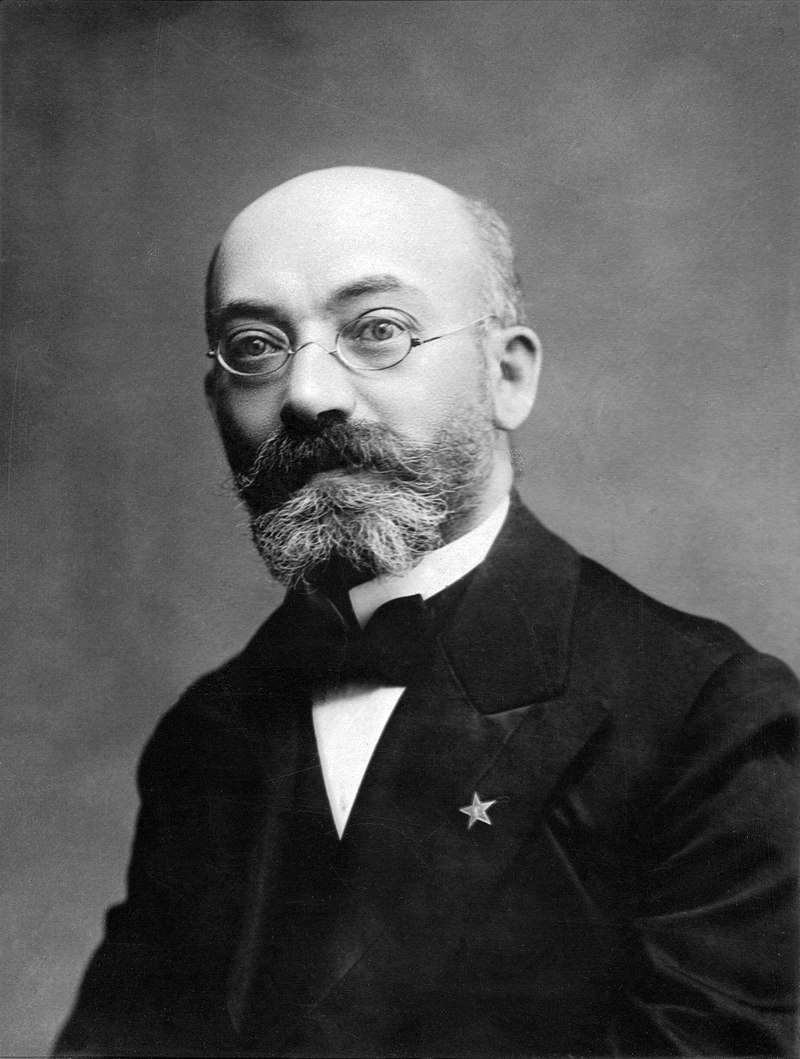 Readers are welcome to mark notable events, births, or deaths on this by consulting the December 15 Wikipedia page.

*Reader Ken reports this: “Outgoing Oregon governor Kate Brown has commuted the sentences of all 17 prisoners on Oregon’s death row to life without parole.

In her final weeks in office, Gov. Kate Brown is commuting the sentences of those on death row and dismantling the state execution chamber in an effort to effectively end capital punishment in Oregon.

“I’ve been very clear to Oregonians I’m opposed to the death penalty because it’s both dysfunctional and immoral,” Brown said in an interview with OPB.

Brown will commute the sentences of 17 individuals on death row to life in prison without the possibility of parole, effective Wednesday.

The governor’s decision is the latest in an ongoing effort by Democratic lawmakers to stop executing people.

“The death penalty has never been administered fairly or equitably in Oregon,” Brown said. “And in fact, it’s been quite arbitrary. And that is not how a criminal justice system should work.”

Brown, who has used her power of clemency more than any of the state’s previous governors, said for the other commutations she cited personal growth as part of the reason for reducing a person’s sentence. This time, Brown said, the decision is solely based on her belief that the death penalty is immoral and a waste of taxpayer dollars that does not make communities any safer.

Yay for her and the execution-opposing Democrats! Now you may think that since the death penalty is still on the books in Oregon, these prisoners will eventually be replaced by others who will be executed, but that’s unlikely. Oregon has in effect decided to not use it again: only two people have been executed in the last 50 years, the last one in 1997. But the damn Republicans want their retributive punishment.

*Over at the NYT, Bret Stephens calls out the demonization mobs and cancel culture mavens in an op-ed called “Evil clowns and cowardly lions.”

We live in a time when the people who are in charge are scared of the people who aren’t. Professors report being terrified of their students. Publishing executives fear the wrath of junior employees. C.E.O.s worry about staff revolts. Museum curators watch what they say lest it lead to professional annihilation. Politicians in senior positions are nervous about the newbies — on their own side.

. . . But the fear is also doing a lot of damage: to the people on whom the fear is inflicted, on those inflicting it, on the welfare of the institutions to which they belong. In healthy institutions, leaders are supposed to teach, inspire and mold younger people so they can eventually inherit and improve those institutions when they’re ready to take charge. In many of today’s institutions, repeated abdications of authority by cowardly leaders have become invitations to arson by willful upstarts.

. . .It’s not hard to figure out who today’s arsonists are. They aren’t just Trump, Greene and Vladimir Putin. They are also the ideological entrepreneurs in universities, businesses, publishing houses and news media working almost openly to undermine the missions of these institutions — intellectual excellence, profitability, free expression, objectivity — in the name of higher social goals like representation, sustainability, sensitivity and “moral clarity.” Their aim isn’t to make their homes better. It’s to blow them up.

The harder challenge is to recognize our present-day Biedermanns: The university president who claims to believe in academic freedom, until he joins the arsonists in destroying the career of tenured faculty members; the magazine editor who claims to believe in vigorous debate, until he capitulates to those who don’t; the Republican House member who says enough is enough after Jan. 6, until he finds it much more convenient to let bygones be bygones.

These are some of the self-deluded weaklings who set the tone of institutional life in much of America today. It’s why so many others live in fear.

Stephens also castigates the Republicans for cowering to Trump, and for not speaking up when  Marjorie Taylor Greene recently said that if she and Steve Bannon had organized the Jan. 6 insurrection “we would have won. Not to mention, it would’ve been armed.” Oy! Stephens is a conservative, but here he takes a liberal position that damns the chilling of speech.

*As expected, France beat Morocco handily, and so the Big Game, the Final, the title for four year, will involve France versus Argentina, and will take place Sunday. I’m rooting for Argentina.

The drums kept beating out their rhythm, the whistles kept pouring down from the stands, and Morocco’s players kept coming, again and again, their legs weary and their lungs burning, raging against the dying of the light. Morocco, at the last, ran out of road. At no point did it run out of fight.

The 2022 World Cup will have the blockbuster final that both FIFA, its organizer, and its Qatari host would have craved: Lionel Messi’s Argentina against the France of Kylian Mbappé, a squad seeking to become the first team in half a century to retain the most coveted prize in sports.

But regardless of what happens on Sunday, and despite falling, 2-0, to France in a breathless, furious semifinal at Al Bayt on Wednesday, on some plane this will always be Morocco’s World Cup. The tournament that made it a trailblazer, a record-breaker: the first African team to reach a semifinal, the standard-bearer for North Africa and the Middle East at the first Arab World Cup.

Even in defeat, Morocco did not wilt. Walid Regragui’s side recovered from conceding an early goal to Théo Hernandez, and losing all but one member of its defense to injury, to torment France for much of the second half.

Here are the highlights. Hernandez’s first goal, kicking down at the ball (0:37), was great,

*Yep, anti-Semitism is growing all over the Western world, and nobody seems to care. Check out the Wall Street Journal article, “Antisemitism is rising at colleges, and Jewish students are facing growing hostility.” After mentionin Adina Pinsker, a Rutgers student who tucks her Star of David into her sweater when she walks across campus, out of fear of harassment, author Douglas Belkin says this:

Ms. Pinsker’s actions are emblematic of rising fear among some Jewish college students around the country, who have begun shrouding their religious identity and political beliefs to avoid growing ostracism and harassment, according to interviews with dozens of students.

College campuses have long hosted heated debates about the Israel-Palestinian conflict. But now, students say anti-Jewish antagonism is on the rise: Antisemitic incidents have increased, and a growing number of campus groups bar students who support Israel from speaking or joining.

Hostility, including vandalism, threats and slurs toward Jewish students on college campuses increased more than threefold to 155 incidents in 2021 from 47 in 2014, according to the Anti-Defamation League, a New York-based Jewish civil rights organization which has tracked reports of such behavior since 2014. The group counted 2,717 antisemitic incidents in the U.S. overall last year, up 34% from 2020 and the highest number in its records dating to 1979.

. . .Students at schools including the University of Vermont, Wellesley College and DePaul University have ejected Jewish students who support Israel from clubs and study groups, according to interviews with affected students.

. . . On campus, students say that stereotypical antisemitic slurs are directed at Jews, but that much of the hostility derives from growing criticism of Israel’s handling of its political and military conflict with Palestinians over land rights. Jewish students say harassment often compounds when criticism of Israel increases.

Yes, that’s true, and remember that many Jews, like me, want a two-state solution and aren’t fully supportive of Israel’s policies. (Remember, it’s the Palestinians who have repeatedly rejected such a solution.) But that doesn’t matter, because Palestine is just another excuse to hate Jews. Whenever you hear the word “Zionist”, think “anti-Semite.”

*I couldn’t resist reading this with a smile. The Prime Minister of Niceness, Jacinda Ardern of New Zealand, was caught calling an opponent a rude name on a microphone she thought was dead. Oy!

New Zealand Prime Minister Jacinda Ardern was caught on a hot mic Tuesday using a vulgarity against a rival politician in a rare misstep for a leader known for her skill at debating and calm, measured responses.

After five years as prime minister, Ardern faces a tough election campaign in 2023. Her liberal Labour Party won reelection two years ago in a landslide of historic proportions, but recent polls have put her party behind its conservative rivals.

The comment came after lawmaker David Seymour, who leads the libertarian ACT party, peppered Ardern with questions about her government’s record for around seven minutes during Parliament’s Question Time, which allows for spirited debate between rival parties.

As an aside to her deputy Grant Robertson, Ardern said what sounded like, “He’s such an arrogant pr———,” after sitting down. Her words are barely audible on Parliament TV but are just picked up in the background by her desk microphone as House Speaker Adrian Rurawhe talks.

If you think that’s not rude, remember that we shouldn’t call people vulgar terms for genitals. Imagine if her opponent was a woman!

I’m sure you want to hear it, so here’s the best I can do. It’s at the end when the Speaker is saying something. I can barely make it out.

Jacinda is looking a bit hassled these days.

Fortunately, Kiwis have a good sense of humor, and here (at 0:49) the Arrogant Prick reacts to the slur in good New Zealand style:

Meanwhile in Dobrzyn, Hili tries to proffer some wisdom:

Hili: Is it better to ponder over how things should be or over what can be done?
A: People prefer the first. 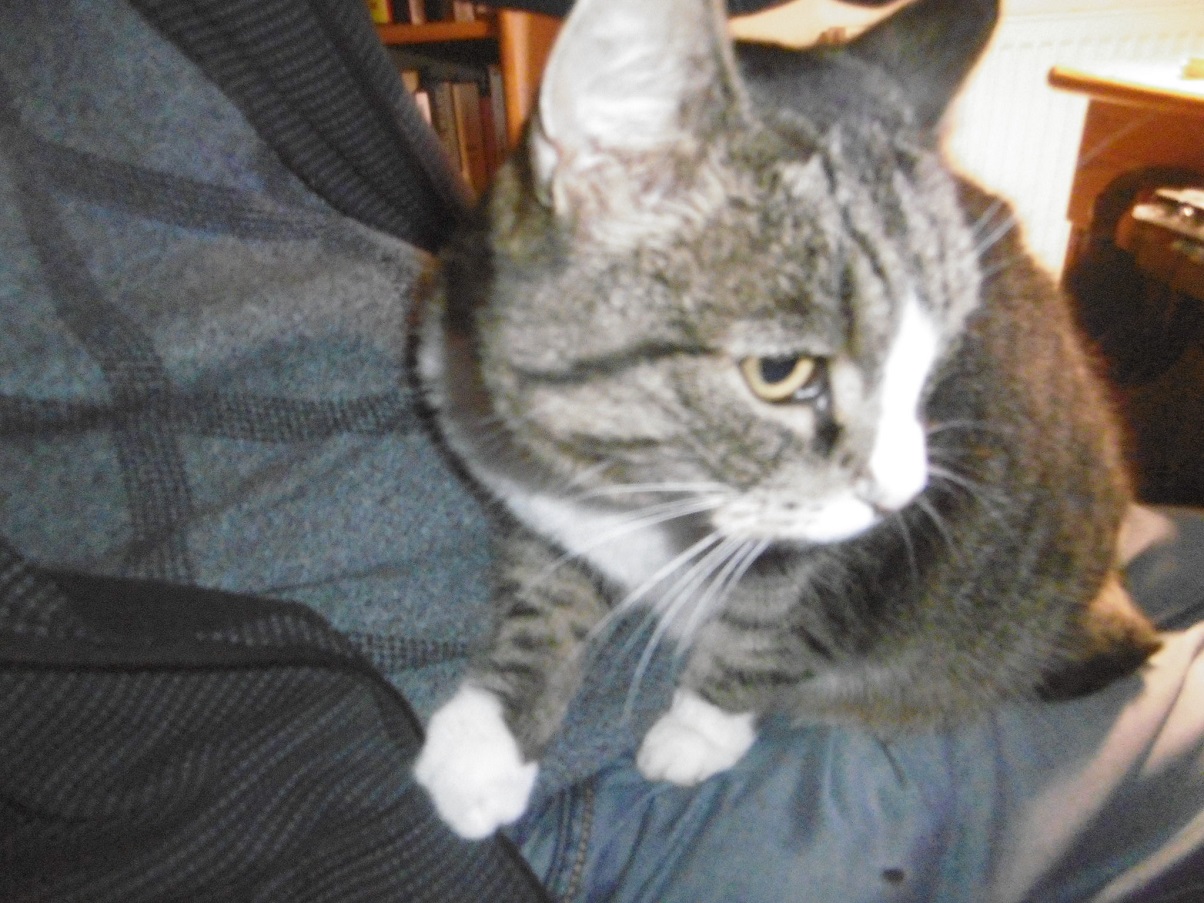 And Paulina’s picture of Baby Kulka in the snow: 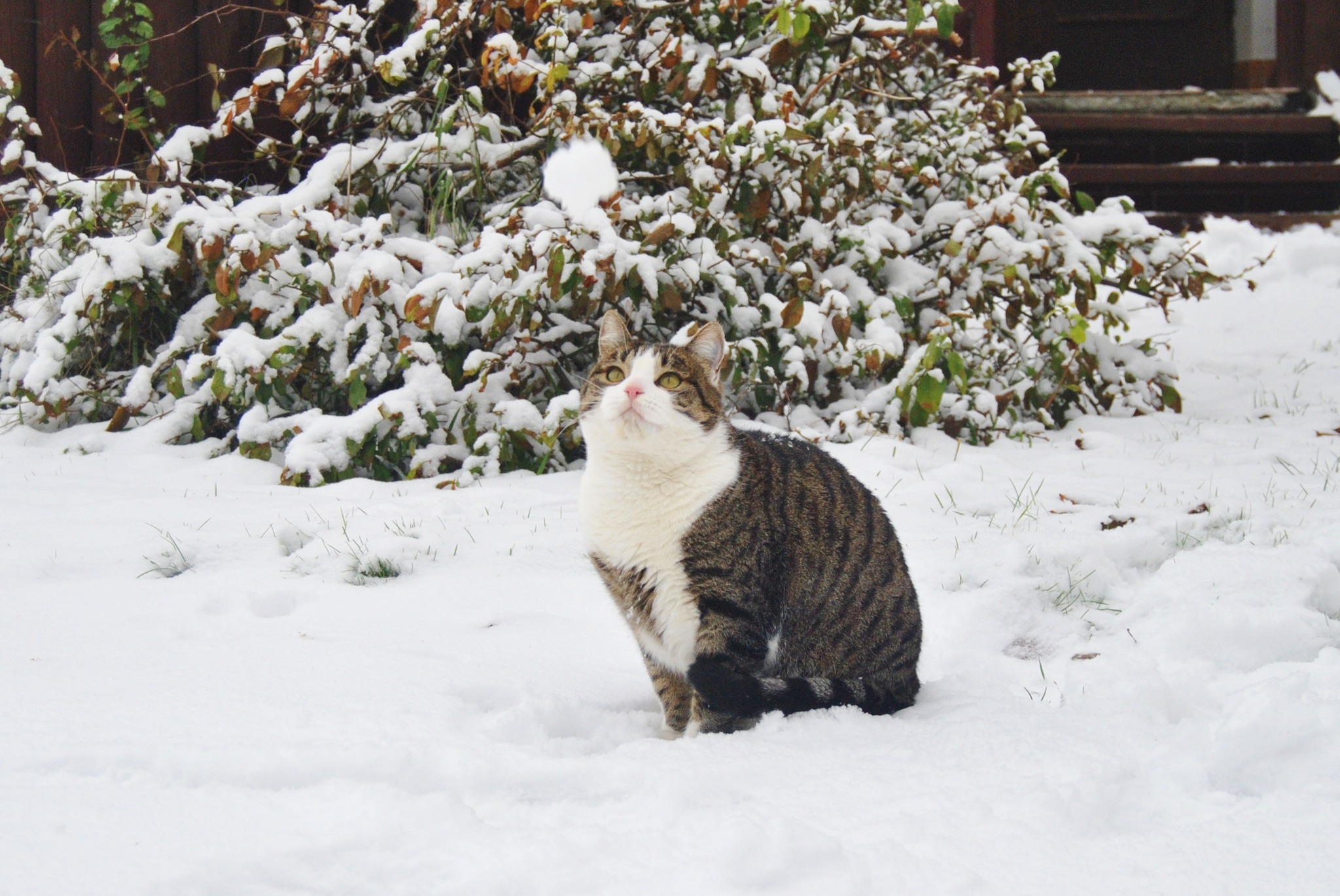 From Butterflies and Wheels, a satirical issue (not too far from the truth, though) of Scientific American (h/t George): 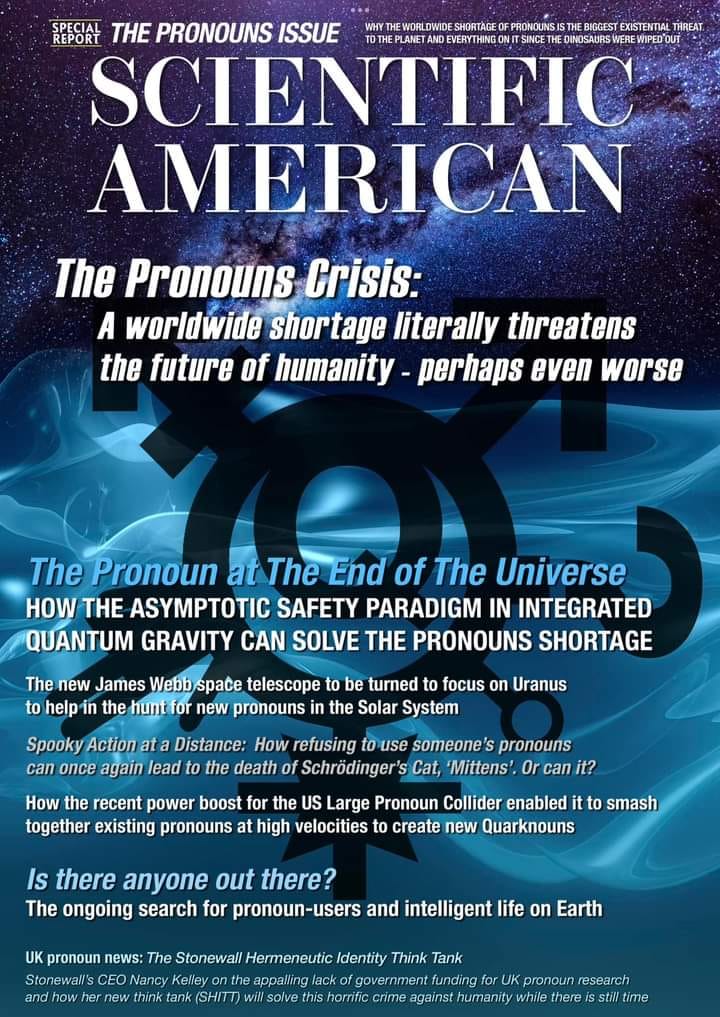 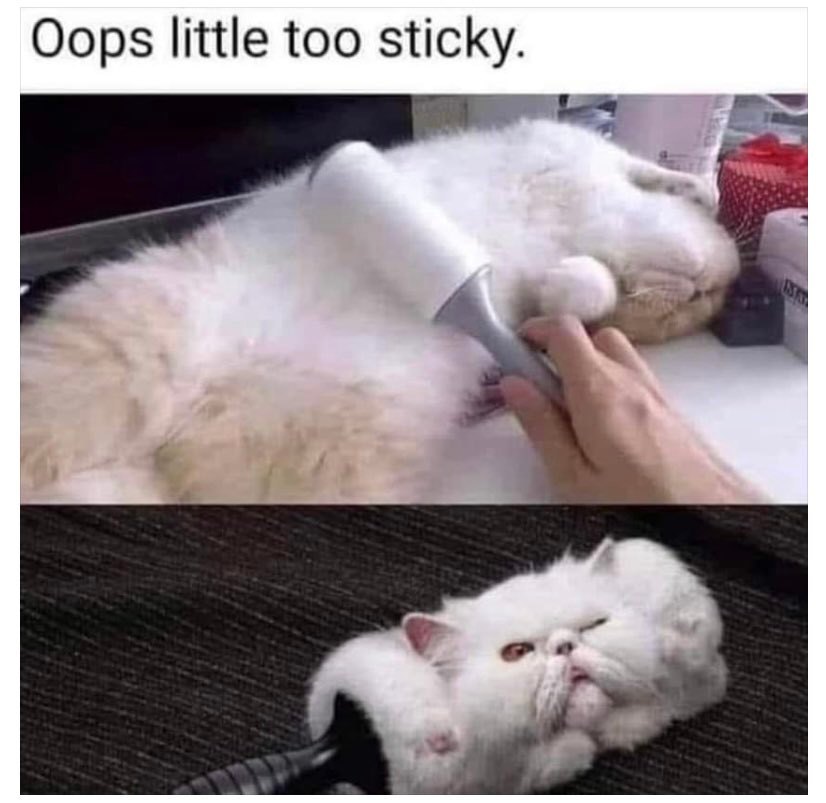 From Merilee, an old Far Side cartoon: 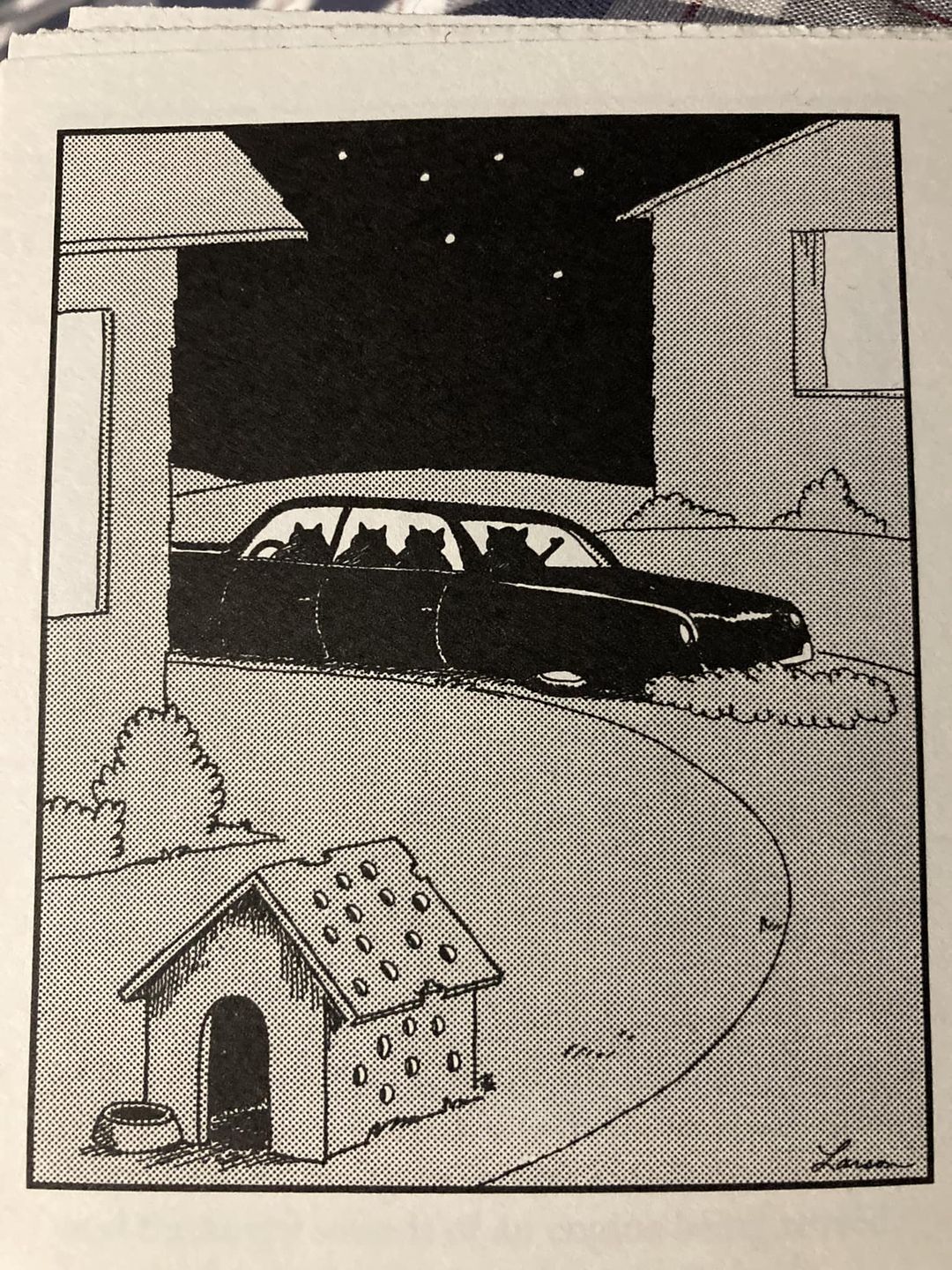 A “toot” from God, who’s moved to Mastodon:

From Masih: about damn time!  The Reuters news story says that the removal of Iran was proposed by the United States. Good on us!

The Islamic Republic of Iran has been removed from the UN’s Commission on the Status of Women!

This is a victory for Iranian revolutionaries who have been facing guns & bullets as they fight this gender apartheid state.

From Barry: A boy becomes an Uber driver for a chicken:

A lovely mantis via Ziya Tong:

From the Auschwitz Memorial: Dead at 15

15 December 1926 | A Polish Jewish girl, Fruma Supe, was born in Warsaw. She emigrated to France.

She was deported to #Auschwitz from Beaune-la-Rolande on 5 August 1942. She did not survive. pic.twitter.com/xeYvKdnJeO

From Professor Cobb: The jump of this collembolan  (a “springtail”) is incredibly fast! Translation: “I was able to take a video of a Martovimushi-type Collembola walking on fallen leaves, but when it reaches a high place, it stops walking, folds its antennae and jumps. I think it was like, ‘Let’s move at once.'”

🧵 1/7. The passenger steamer SS Warrimoo was quietly knifing its way through the waters of the mid-Pacific on its way from Vancouver to Australia. The navigator had just finished working out a star fix and brought Captain John DS. Phillips, the result. pic.twitter.com/Ora4EtujZ4

The ship was therefore concurrently in:

and in two different centuries.