Well, this doesn’t count as wildlife, but it does refer to the excretory habits of one species of primate. As contributor Athayde Tonhasca Júnior notes, ” I strongly suspect that this subject has not been approached before in your website. . . ” Indeed!  Apparently these are loo-related photos from his travels.Athayde’s notes are indented, and you can click on the photos to enlarge them.

A visit to the toilet (room), bathroom, restroom, washroom, or lavatory, is an opportunity for reflection and introspection, or to seek refuge, peace and quiet. Indeed, British men allegedly spend seven hours per year in the toilet hiding from their wives and children (according to “research” commissioned by a bathroom furniture company). But the loo – or bog, can, head, john, or latrine – can also be a place of amusement and learning.

A flamingo on duty to check your hand-washing technique in Bologna, Italy. 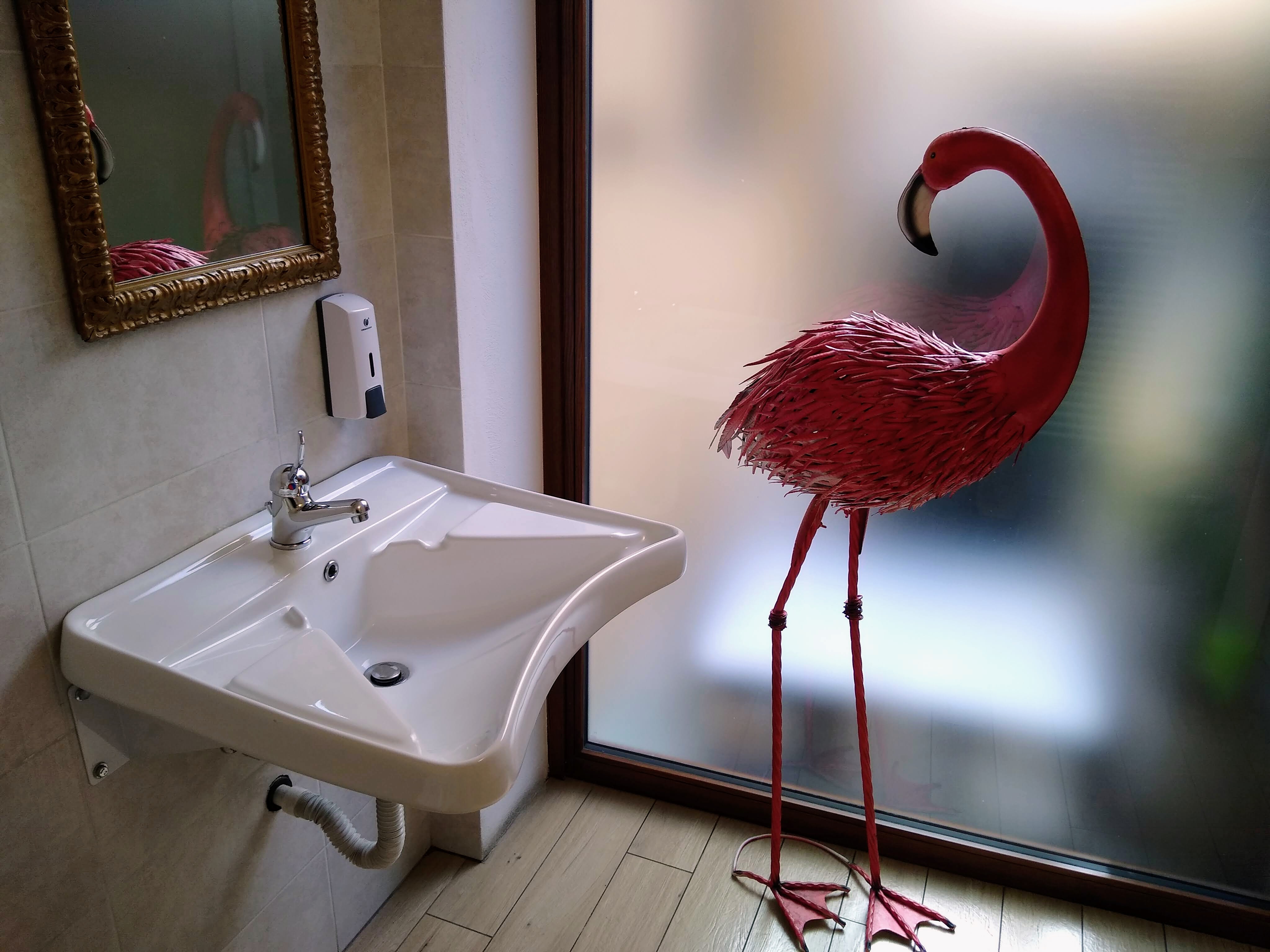 Unfortunately this educative and lyrical message was removed from a dentistry practice in Perth, UK: 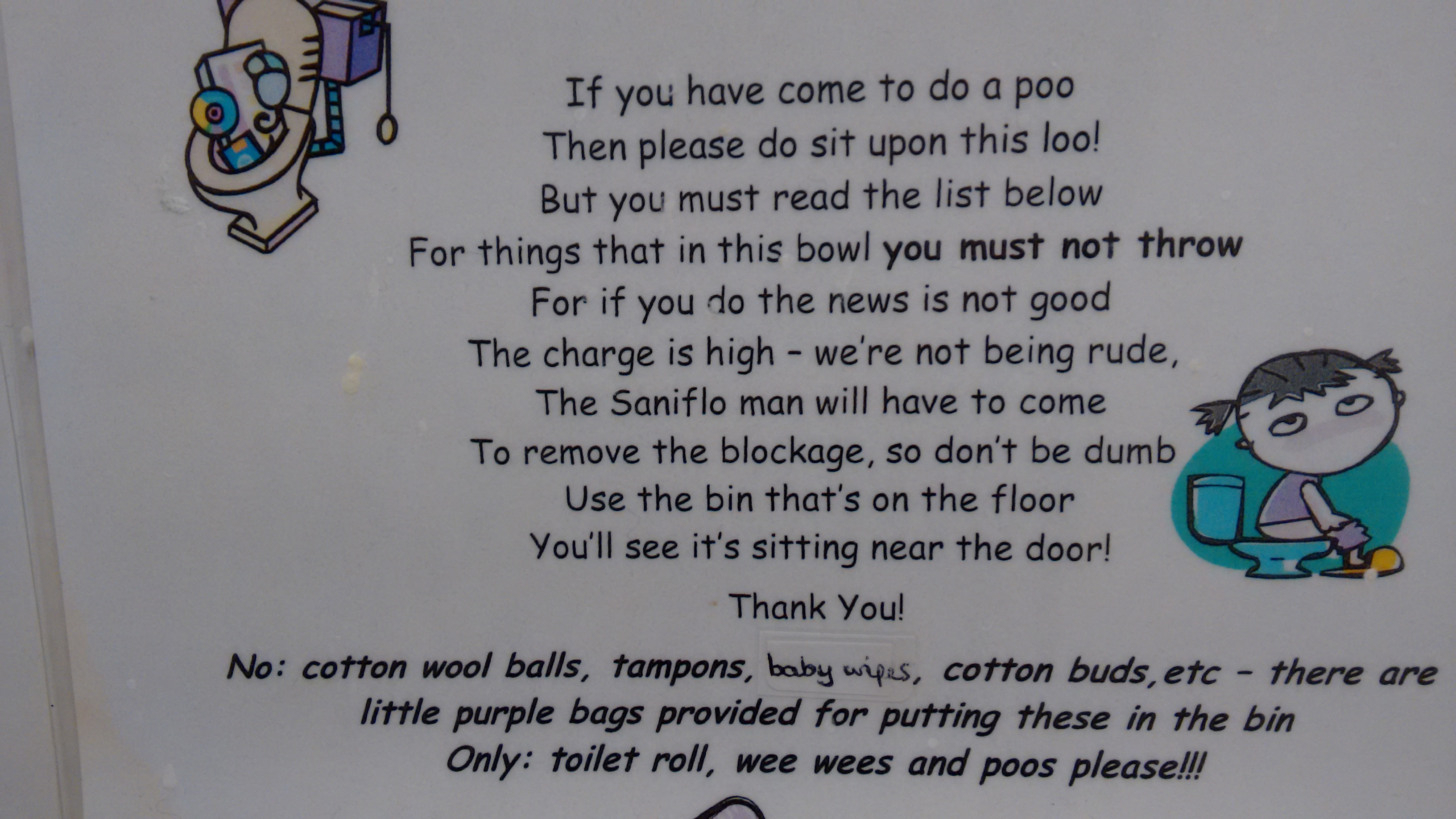 A health warning in Scots, which is a language, a dialect or bad English, depending on who you ask (and their political views). The UK government and the European Union recognise Scots as a minority language, but many linguists place it somewhere on a dialect continuum. To the chagrin of nationalists, Scottish heavyweights Adam Smith and David Hume considered the use of Scots as an indication of poor education. 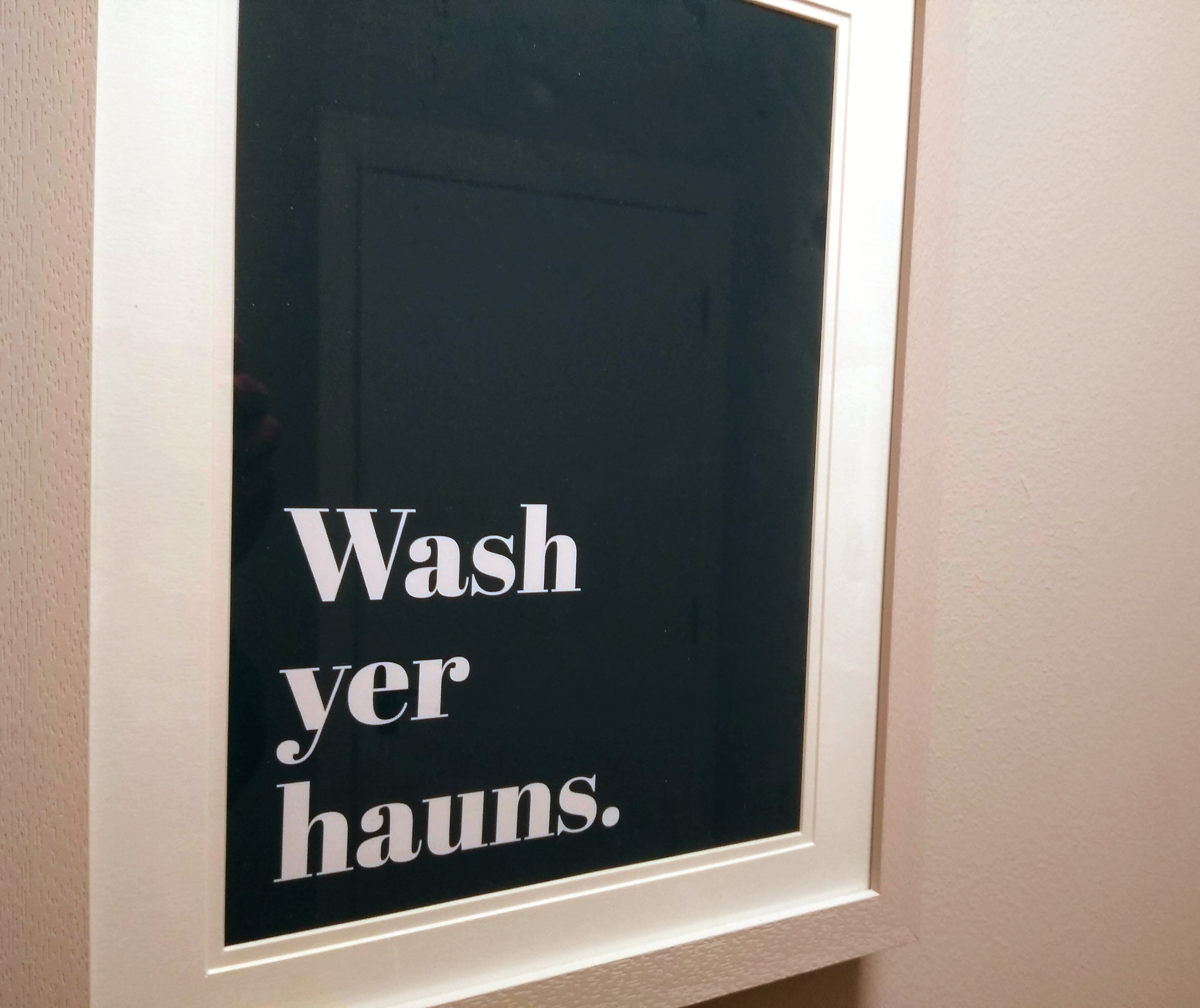 An emergency cord is great, but what if you want to order a pizza or dry your hair while bombing the bowl? (Hotel in Padua, Italy): 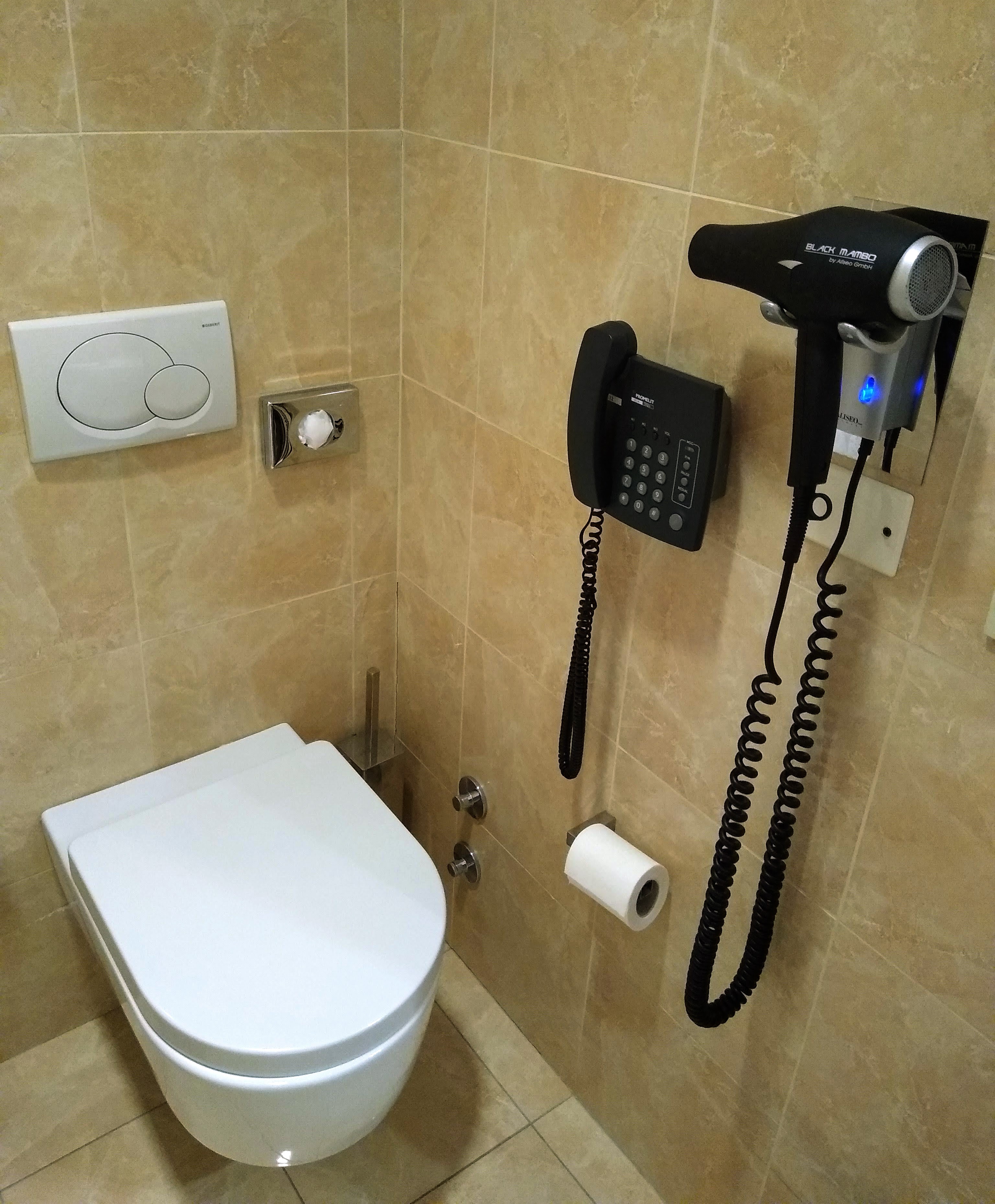 My travelling companion was displeased with the facilities in a Padua cafe. Squat toilets are terrible for the elderly or disabled, but they have a great advantage: you don’t need to touch anything. You learn to appreciate them when you hear the call of nature in the back of beyond. They are also better for your health, supposedly: 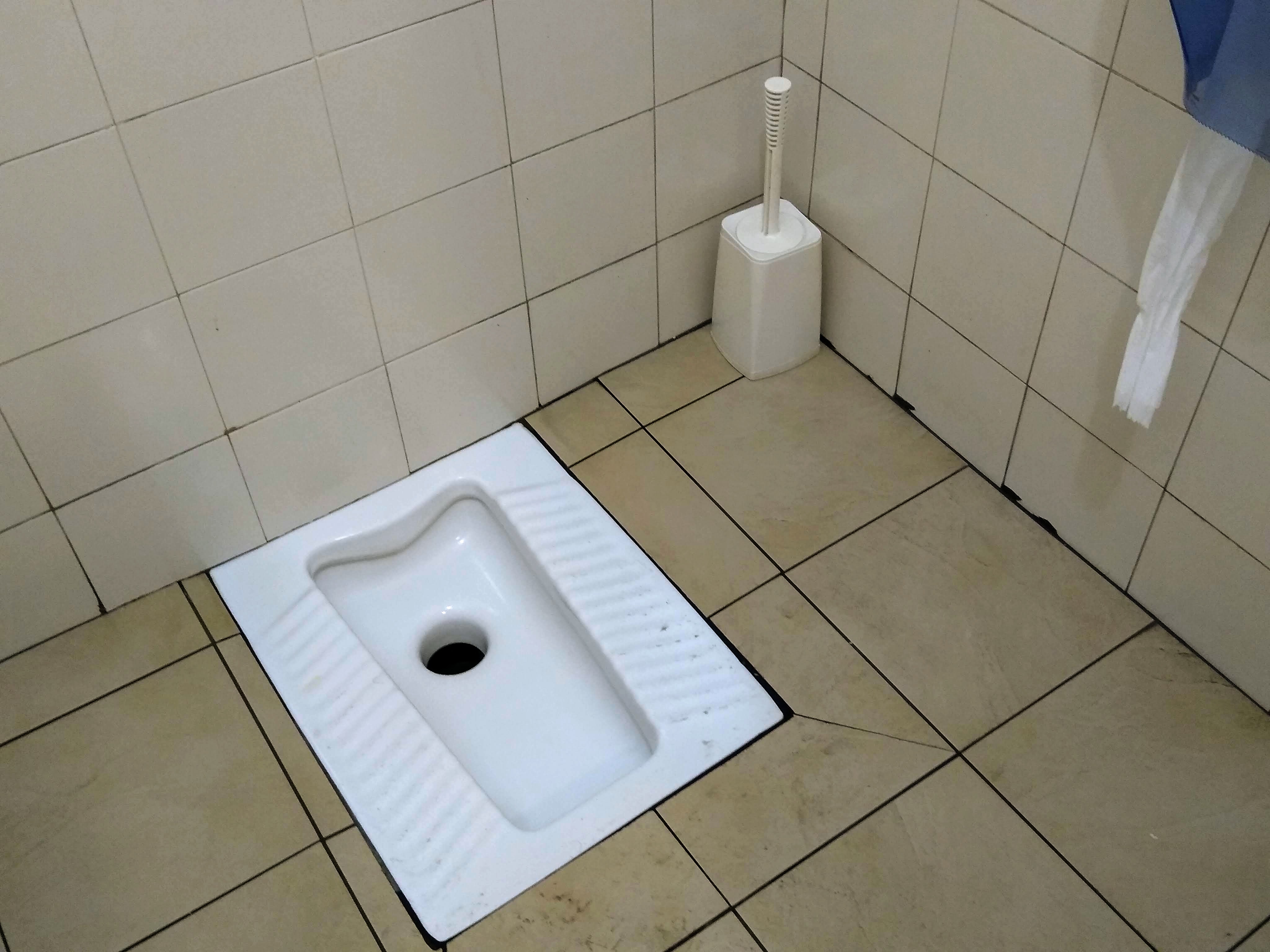 A latrine in the Housesteads Roman Fort, Britain, on the northernmost edge of the Roman Empire. Year 200 AC:

Marcus: Salve, Quintus.
Quintus: Ave, Marcus. Are you well? You look a bit green around the gills.
Marcus: Tell me about it. I think that batch of garum from Rome was off.
Quintus: I hear you.
Cornelius: I hear you too, Marcus. Loud and clear! Ha-ha! Say, chaps, wouldn’t you have a spare sponge on you? 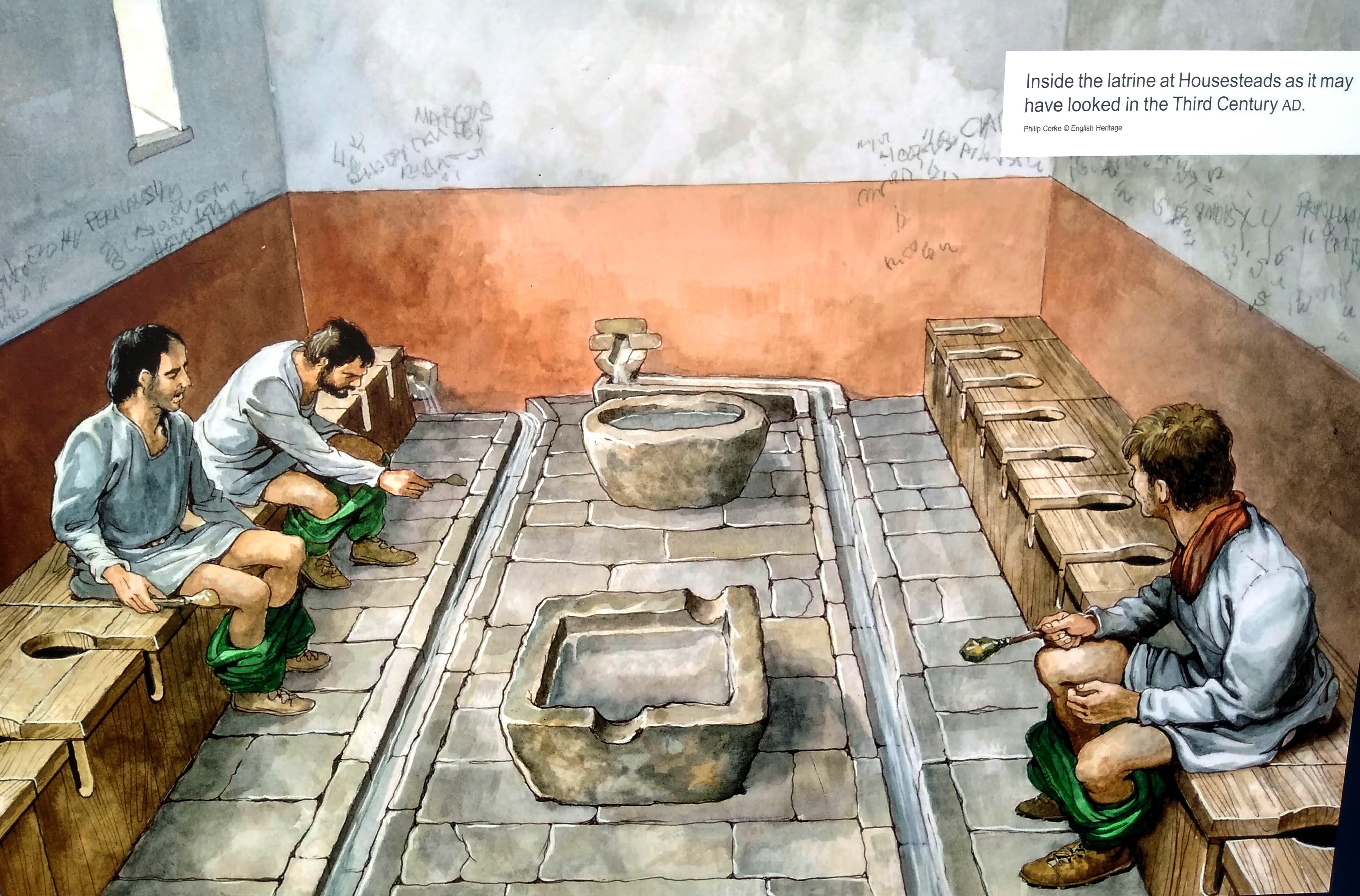 A tersorium (a sea sponge on a stick) supposedly used by the Romans to wipe themselves after using the latrine. The sponge may have been washed in a gutter with running water, or in a bucket of water, salt and vinegar. But not everyone agrees with this popular tale (kids love it). According to Gilbert Wiplinger (Austrian Archaeological Institute), the tersorium may have been nothing more than a toilet brush. Read his gripping account in the Proceedings of the International Frontinus-Symposium on the Technical and Cultural History of Ancient Baths, Aachen, Germany, 2009. 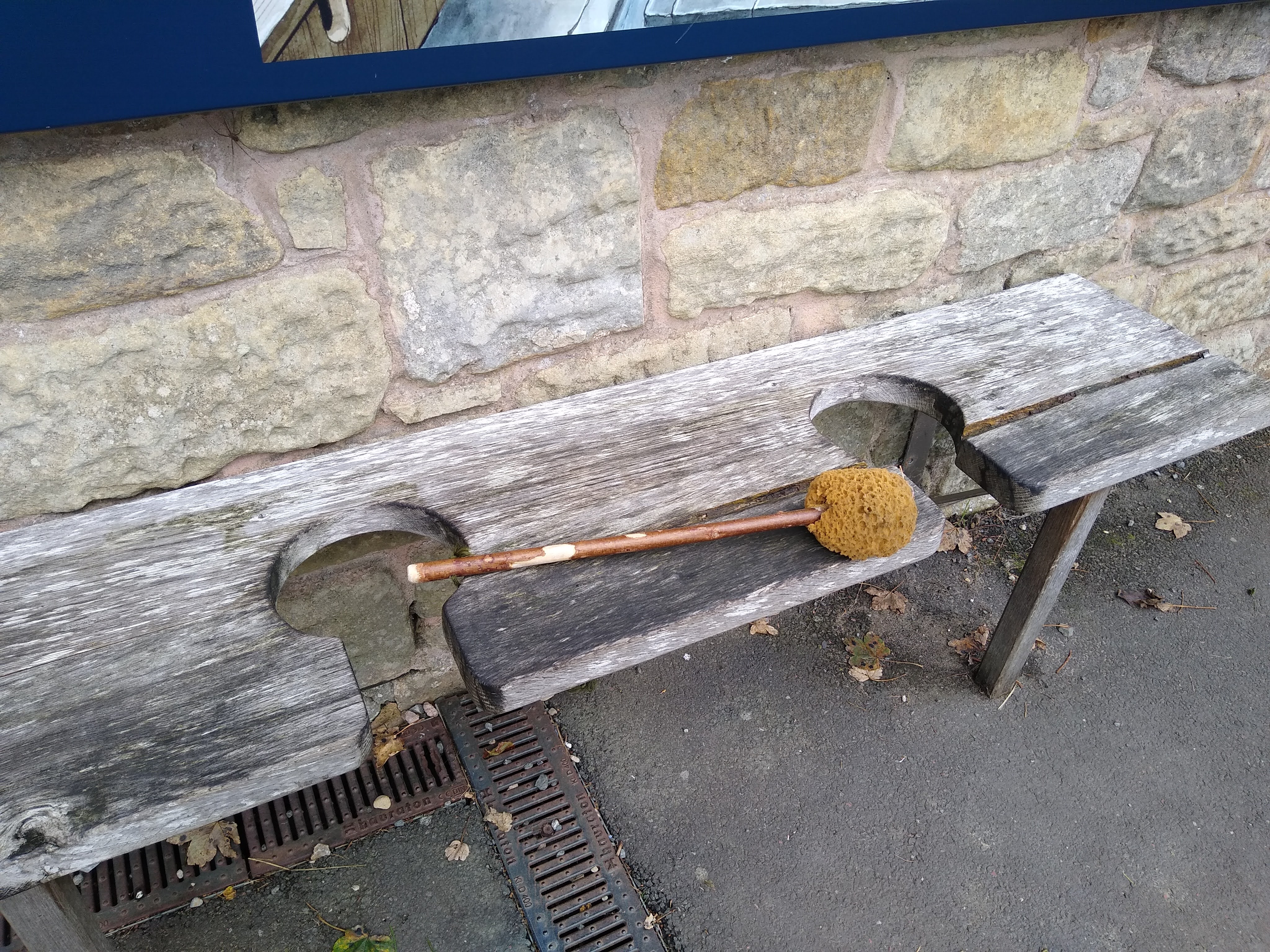 Sign in a loo in an antechamber of Perth’s Sheriff Court House. One must be at rock bottom to shoot up before facing a sheriff (a Scottish judge with powers to fine or lock you up for up to five years). For the last seven years, Scotland has maintained the unenviable first place in Europe for drug-related deaths; drugs in Scotland have a death rate almost four times the rate in the UK as a whole. These figures – together with failing education, economy and health indicators – are secondary for people in power. The one-track-mind Scottish National Party cares for little else besides breaking up the union: 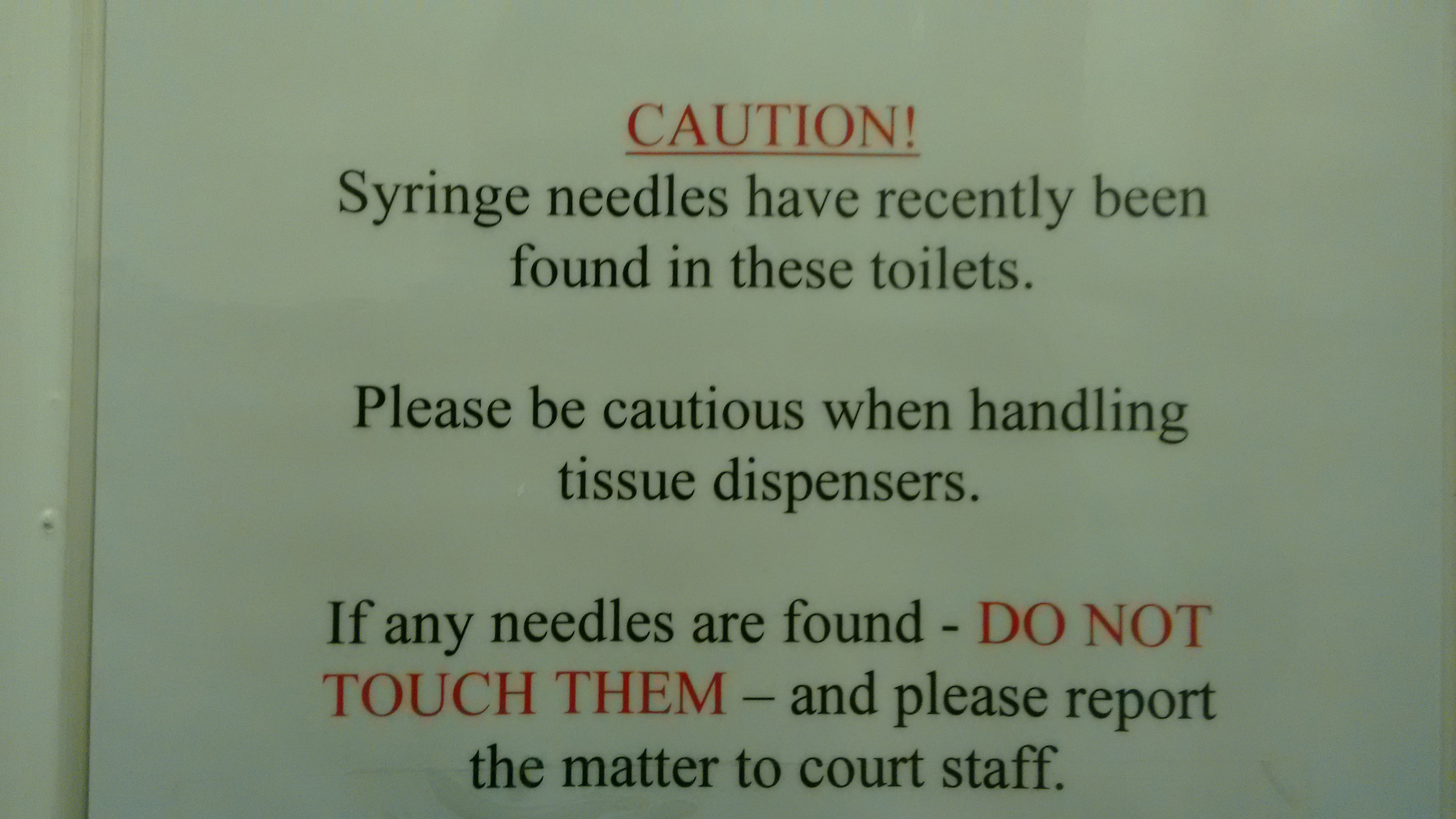 Epiphany inside a loo in Perth, UK: 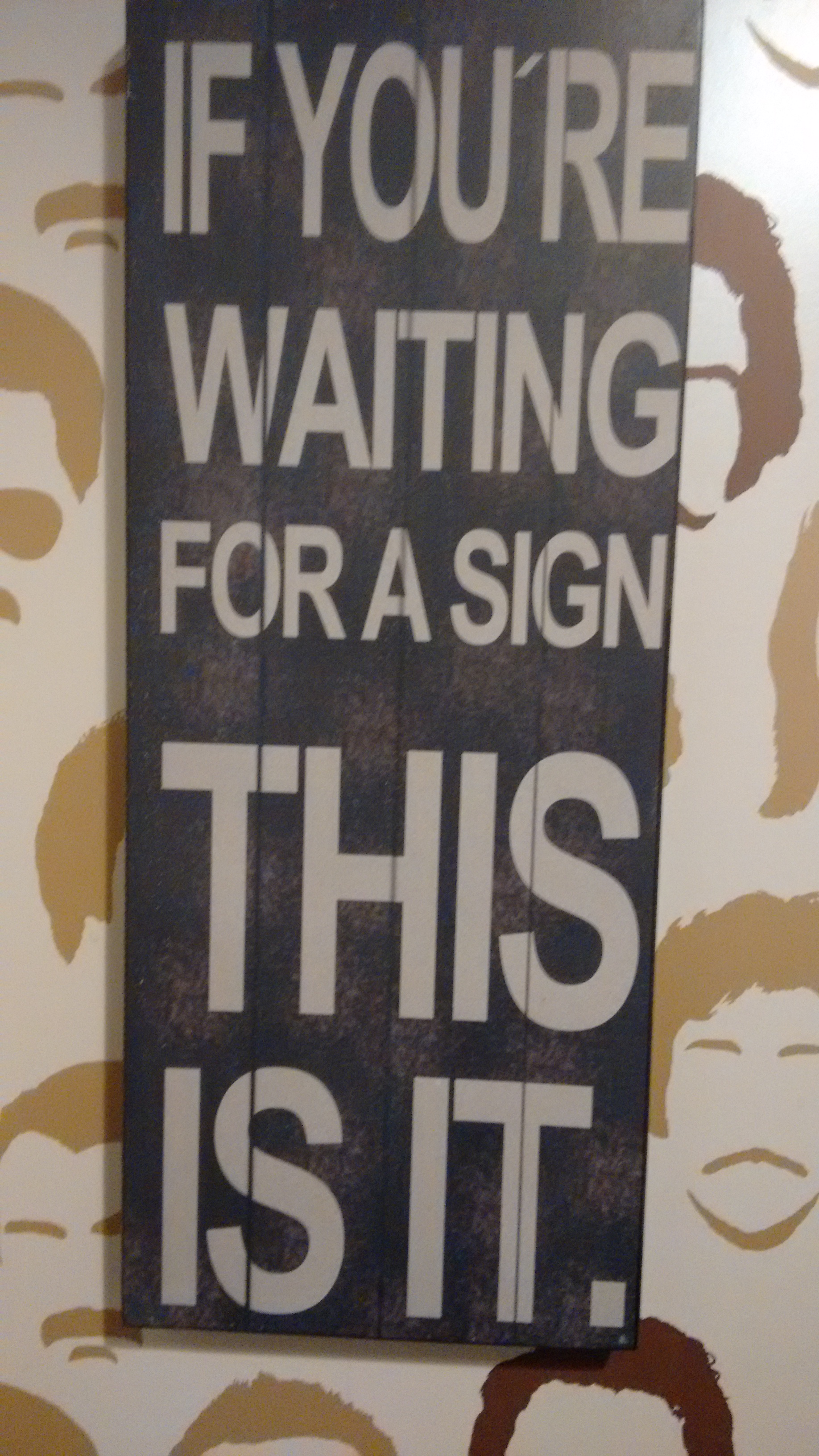 The facilities in the family home (today a museum) of Brazilian painter Cândido Portinari (1903-1962) in the town of Brodowski, São Paulo State, illustrate a time when homes were not cluttered with stuff and had plenty of space to spare: 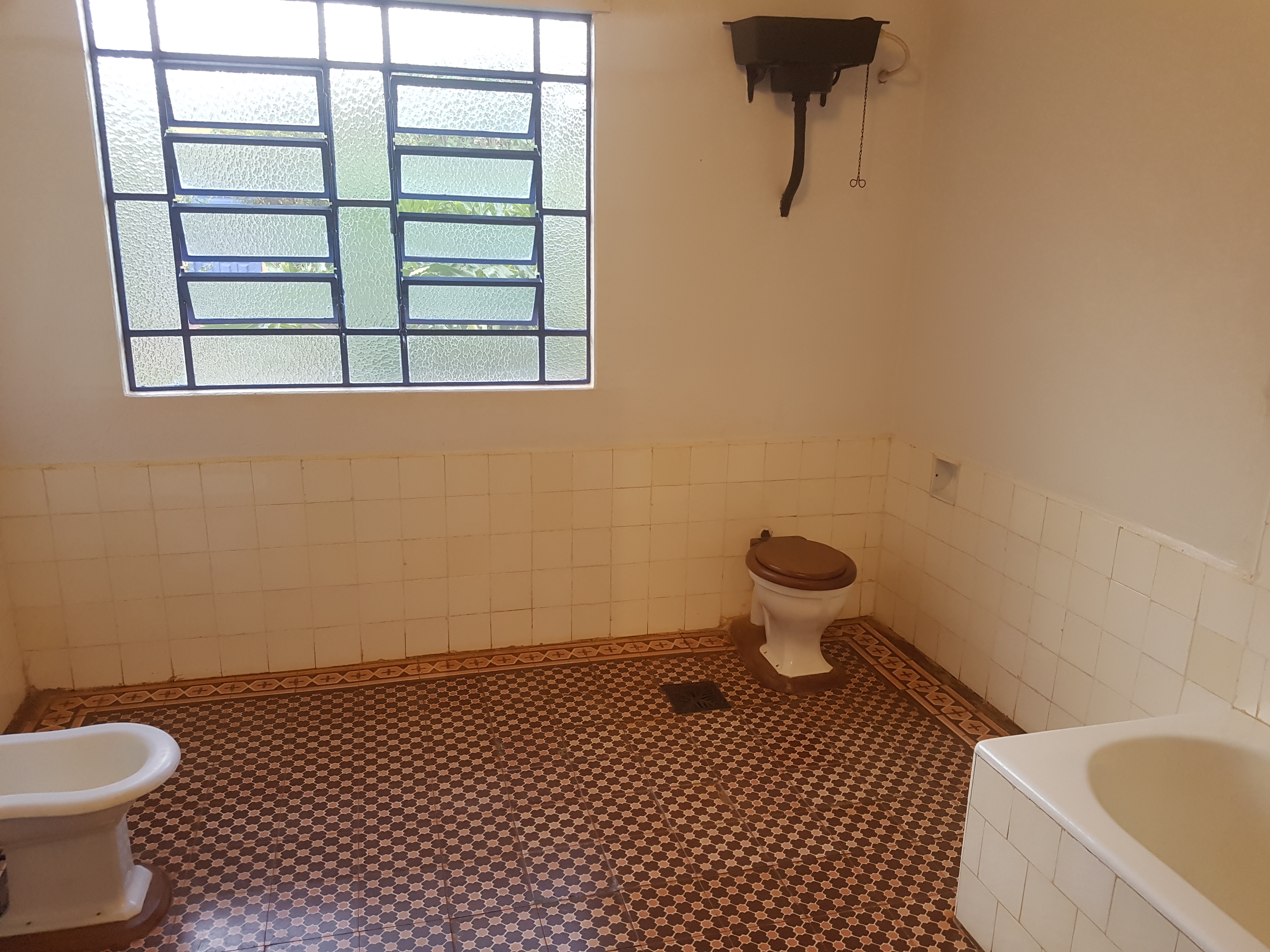 Collector, philanthropist and extremely rich Ema Klabin (1907–1994) needed the loo to store some of her many priceless pieces of art. Her house in São Paulo is a museum (Fundação Cultural Ema Gordon Klabin) well worth visiting. Entrance is free: 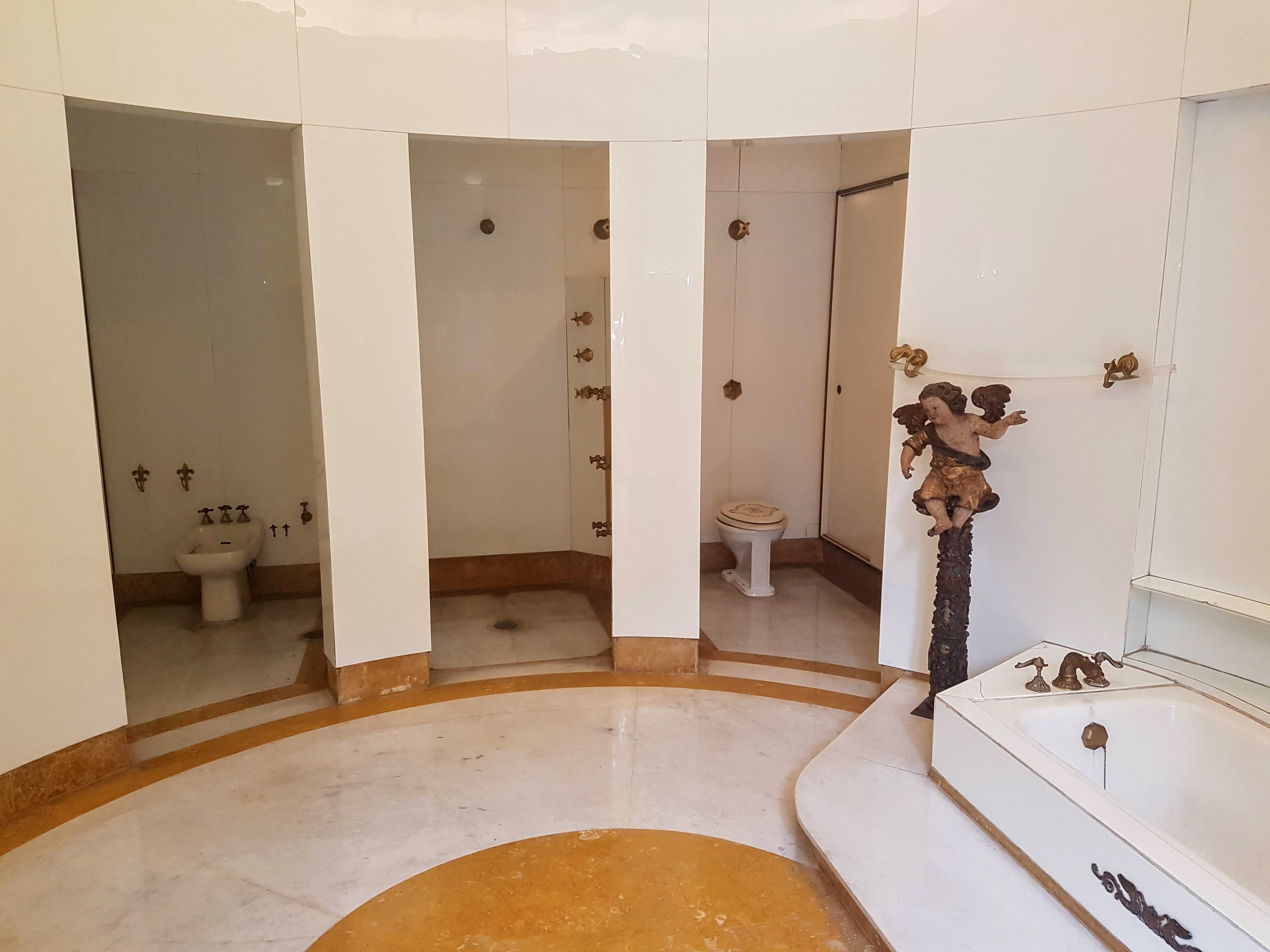 A replica of a once common warning to men in public urinals, hotels and railroad stations in the UK. Not doing-up all the buttons of your trousers (no zippers then) was a grave indiscretion: 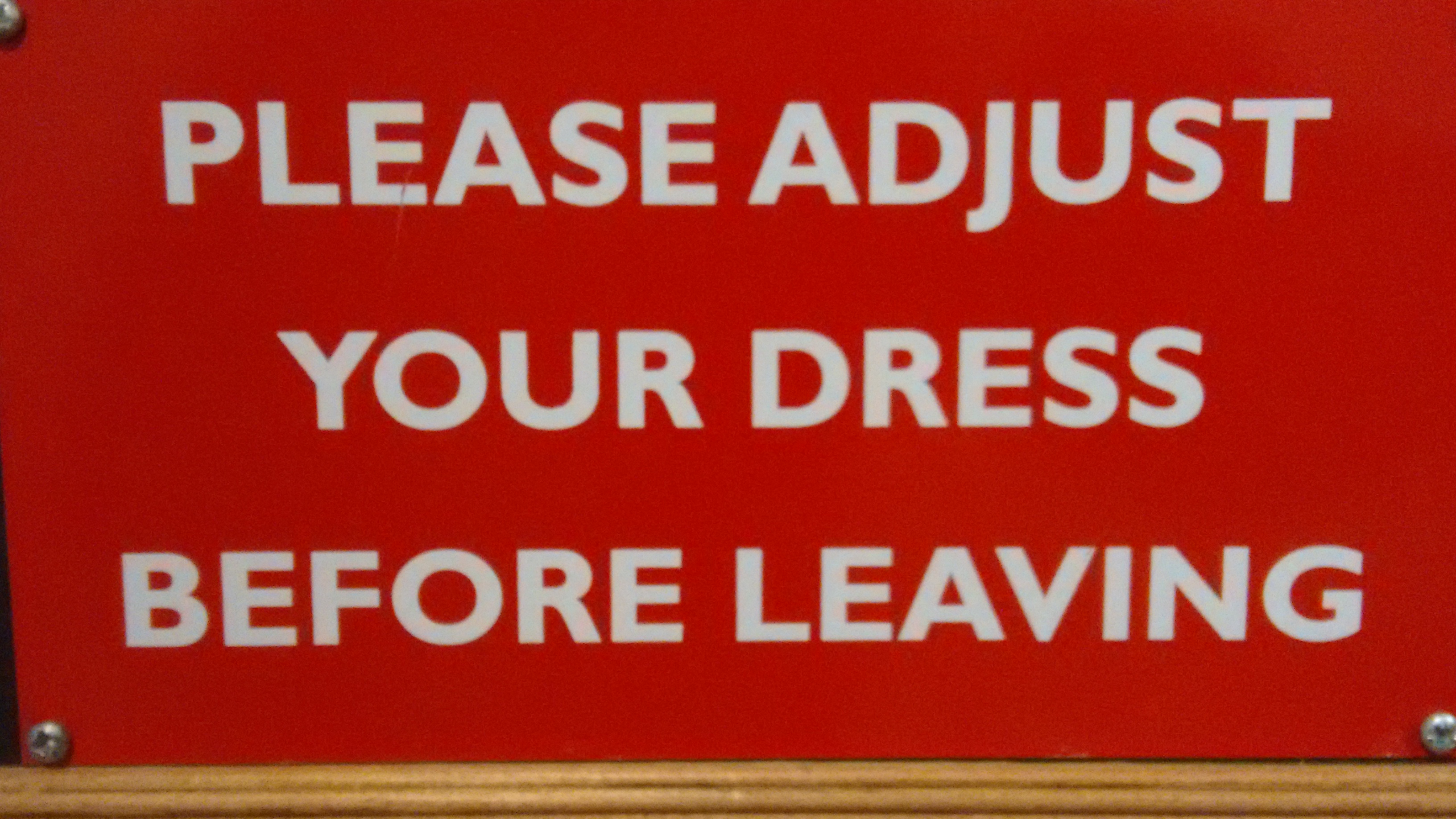 That’s not nice. At all: 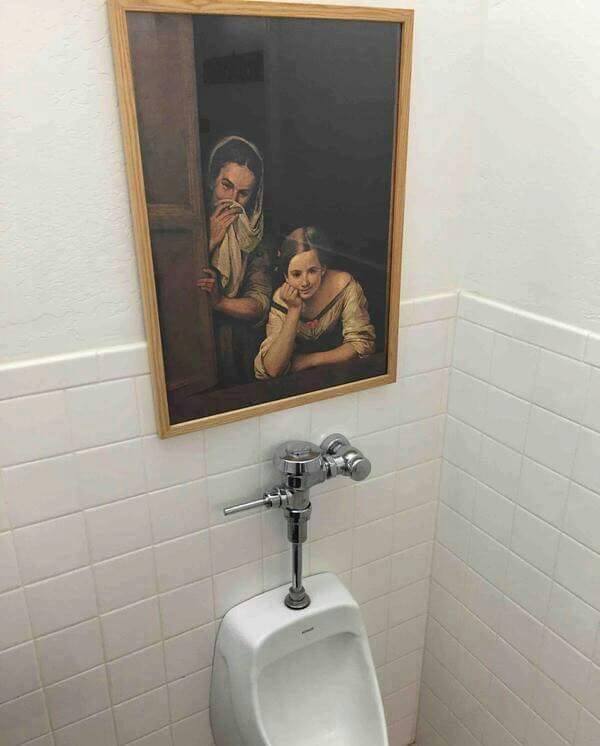 Able young non-pregnant adults can use the loo in the petrol station across the road: 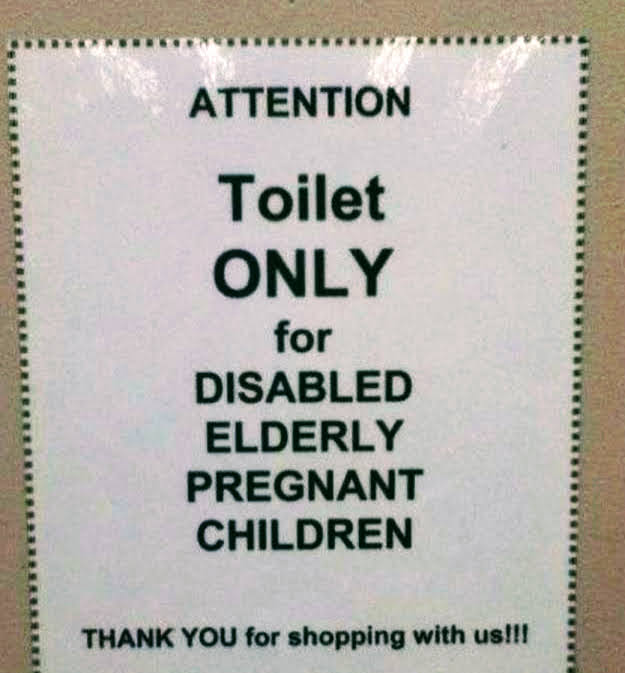 In a cafe in the Brazilian coastal city of Ubatuba, you are not allowed to flush yourself. Presumably to prevent polluting the sea: 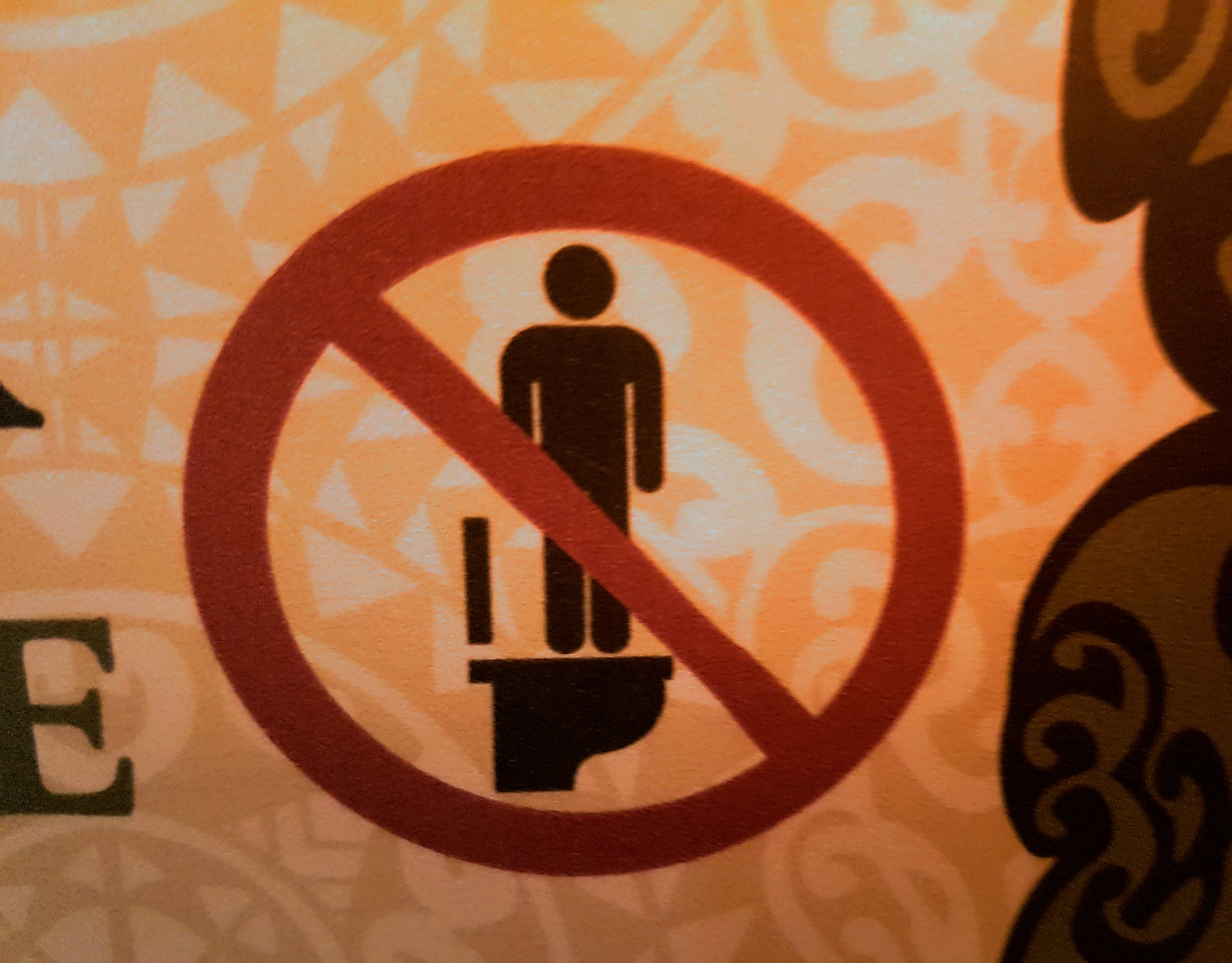 “Use the toilet as you have committed a crime: don’t leave clues behind” (loo in a São Paulo bookshop): 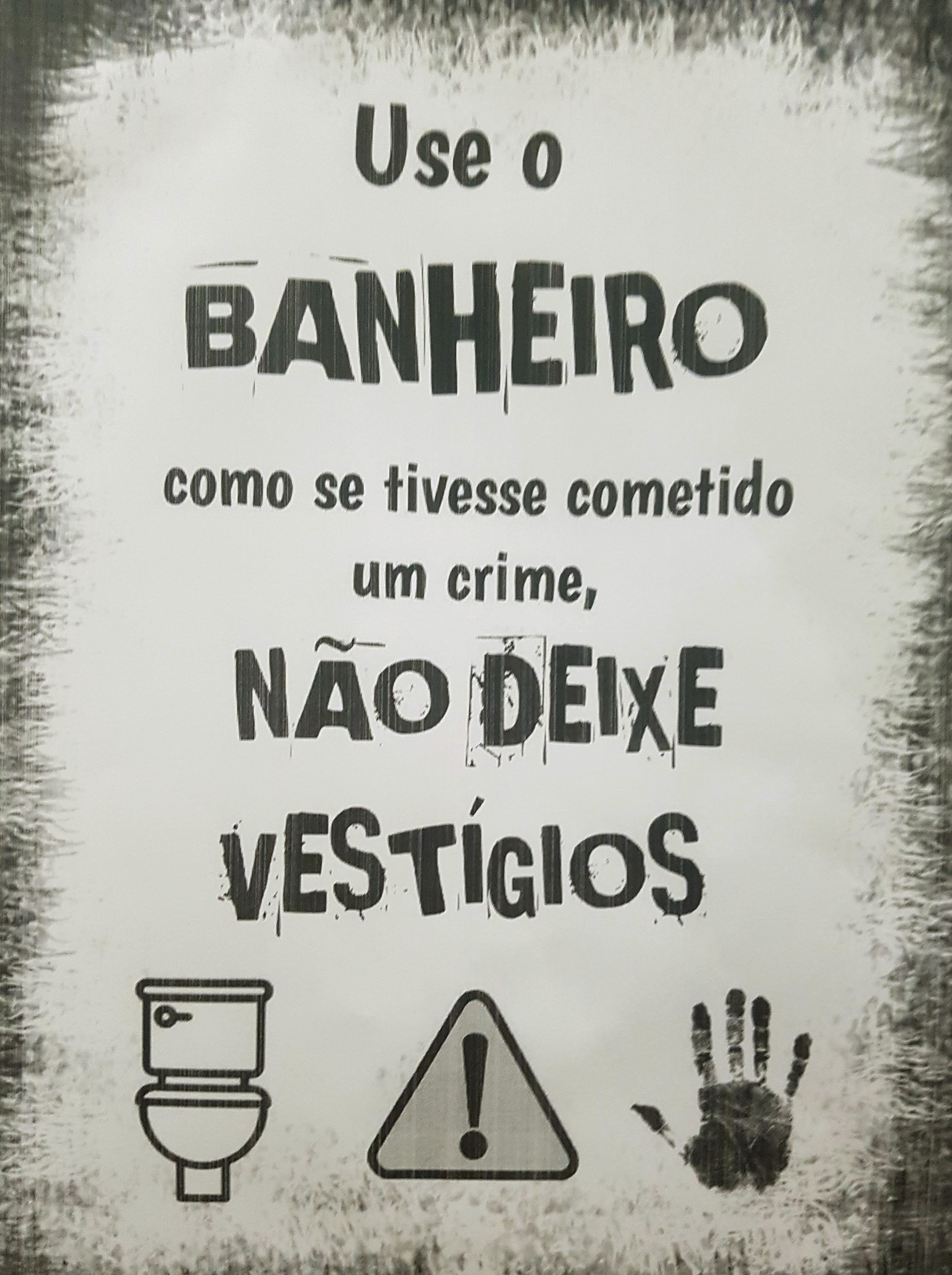