Here we have an hourlong talk by Richard Buggs, Senior Research Leader (Plant Health & Adaptation) at Royal Botanic Gardens Kew, and Professor of Evolutionary Genomics at Queen Mary University of London. We met Dr. Buggs on this site in 2021 as “a creationist professor of evolutionary biology in England,” where he touted Intelligent Design;  I included a shorter video in which Buggs mixed his God with his science. Now he’s doing it again in his Inaugural Lecture at Queen Mary University (below).

Professor Richard Buggs is an evolutionary biologist and molecular ecologist. His research group analyses DNA sequences to understand how plants, especially trees, adapt in response to climate change and new pests and pathogens. Richard has published on a variety of evolutionary processes including: natural selection, speciation, hybridisation and whole genome duplication. The birch species Betula buggsii is named after him. Richard is a Christian, and sometimes blogs on issues where biology and Christianity intersect.

He’s also author of the 2007 Guardian article below (click if you want to read):

A quote from the article:

But, whatever the limitations of Darwinism, isn’t the intelligent design alternative an “intellectual dead end”? No. If true, ID is a profound insight into the natural world and a motivator to scientific inquiry. The pioneers of modern science, who were convinced that nature is designed, consequently held that it could be understood by human intellects. This confidence helped to drive the scientific revolution. More recently, proponents of ID predicted that some “junk” DNA must have a function well before this view became mainstream among Darwinists.

But, according to Randerson, ID is not a science because “there is no evidence that could in principle disprove ID”. Remind me, what is claimed of Darwinism? If, as an explanation for organised complexity, Darwinism had a more convincing evidential basis, then many of us would give up on ID

Back to the talk. This is a very bizarre lecture. In the first half he denies the existence of branching evolutionary trees, arguing that this invalidates both Darwinism and natural selection (note: although evolution is required for such trees, natural selection is not).

To do this, he cherry-picks data in which a few independent trees, derived from both morphological and DNA data, are not concordant. But that does happen under evolution, for sometimes genes are transferred horizontally, or via hybridization, or we have “incomplete lineage sorting”, in which segregating ancestral genetic variation is distributed among descendants. Further, if you use only a few genes—and note that Buggs’s trees are based on only a few genes—you may get a “gene tree” that’s discordant with the “species tree”—the actual history of new lineage formation via splitting. Allen Orr and I discuss this discordance in the Appendix of our book Speciation. The upshot is that you don’t expect every gene to give the same tree, but if evolution and evolutionary splitting occurred, you would expect the preponderance of genes to give the same tree. And they do, save in the rare case when there’s been pervasive hybridization between groups, and the species involved are fairly closely related.

Buggs also dwells at length on the relatively sudden appearance of angiosperms, almost implying that it supports sudden creation, though he ignores the fact that monocot plants appear far earlier than angiospemrs in the fossil record, so the data don’t support the evidence of any creation. (Note: Buggs implies that the fossil record and molecular data support a religious scenario rather than an evolutionary one, but is very canny about mentioning Biblical creationism or Intelligent Design.)

At 39:38, Buggs shifts gears and tells the baffled audience (listen to the tepid applause is at the end!) that well, maybe the evolutionary “tree of life” doesn’t exist, but the BIBLICAL tree of life does! This “tree of life” stands for eternity and all the claims of Christianity, for the words “tree of life” appears in Revelation (2:7 and 22:1-3).  Here’s a summary of Buggs’s “evidence” for the Bible: 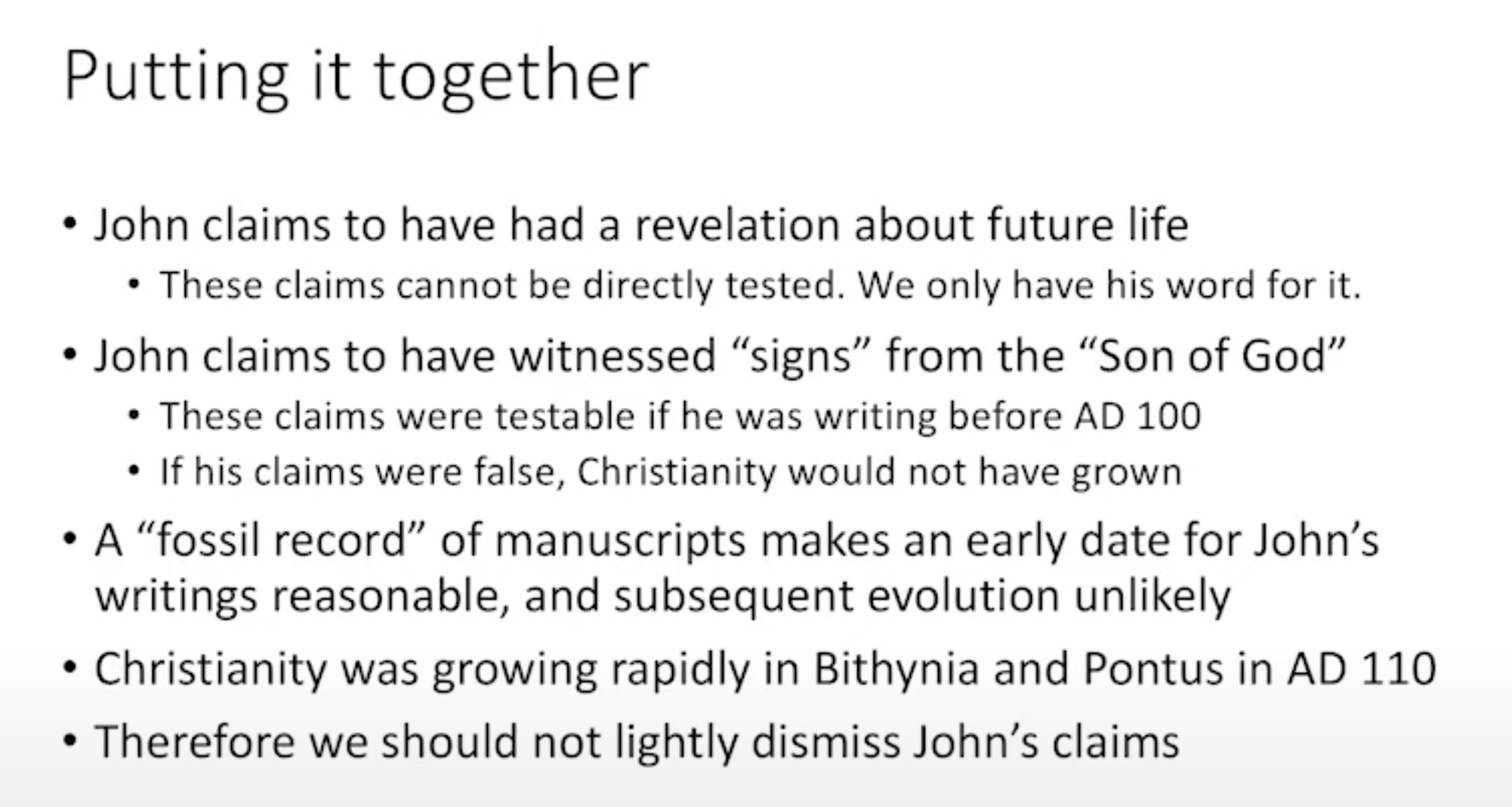 In other words, because many people believed in Christianity, and John had a revelation, Christianity must be true (his words are “we should not lightly dismiss John’s claims”).  How little it takes to convince Buggs of the New Testament’s truth, and how much it would take to convince him of evolution! (Remember, he concentrates ONLY on the existence of trees as evidence for evolution, ignoring things like development, the fossil record, biogeography, observations of natural selection in action, and all the stuff I adduce in Why Evolution is True.)

I’d urge you to at least listen to the last 20 minutes so you can see how a scientist can be so credulous that he’s persuaded that Christianity is true based on the thinnest evidence you can imagine.

Finally, BUGGS goes woke at the end, promoting “inclusion” in STEM, but he apparently does as a way to promote religion. For, as the sweating Dr. Buggs shows, Christianity is most pervasive in “countries of color”: those in sub-Saharan Africa and Latin America (also the U.S., but he ignores that). His conclusion? We need to include RELIGION more in the sciences, and be nicer to believers, because that will attract more “non diverse” people into STEM. This is a very weaselly proposal for sneaking religion into the sciences!

In the end, Buggs distorts and misrepresents what science has told us, ignores the pervasive evidence for evolution besides evolutionary trees, and gives an embarrassingly thin account of “evidence” for Christianity.

Yet this man is a professor of evolutionary biology and molecular ecology! His presence at Queen Mary University of London, much less his promotion to Professor, reflects very poorly on his university. I’m not urging his dismissal, though if he were teaching this guff at a public university in America he’d be violating the First Amendment and should be told to leave the religion out of his teaching. Now it’s possible that Buggs doesn’t mention Jesus or the Bible in his classes, and that would be great. But I truly doubt that he gives a good account of the evidence for evolution, either. (After all, he accept Intelligent Design, not evolution.) That is, I suspect Buggs’s students are being shortchanged, and if that’s the case, I feel sorry for them. As for Queen Mary University, I’d merely suggest that they check if Buggs is dragging religion into his teachings.