Adamandi, a musical, was first performed at Princeton University on November 11, and continued until 8 days later. A description from the website:

A new horror musical in the genre of dark academia with book and lyrics by Mel Hornyak and Elliot Valentine Lee and music by Lee. The story focuses on three queer students of color at an elite college going to horrific lengths to prove their worth for a coveted graduation honor. The show features a score with baroque pop and dark cabaret influences. Performance on 11/18 features open captions. No tickets required.

And a photo by Larry Levanti: 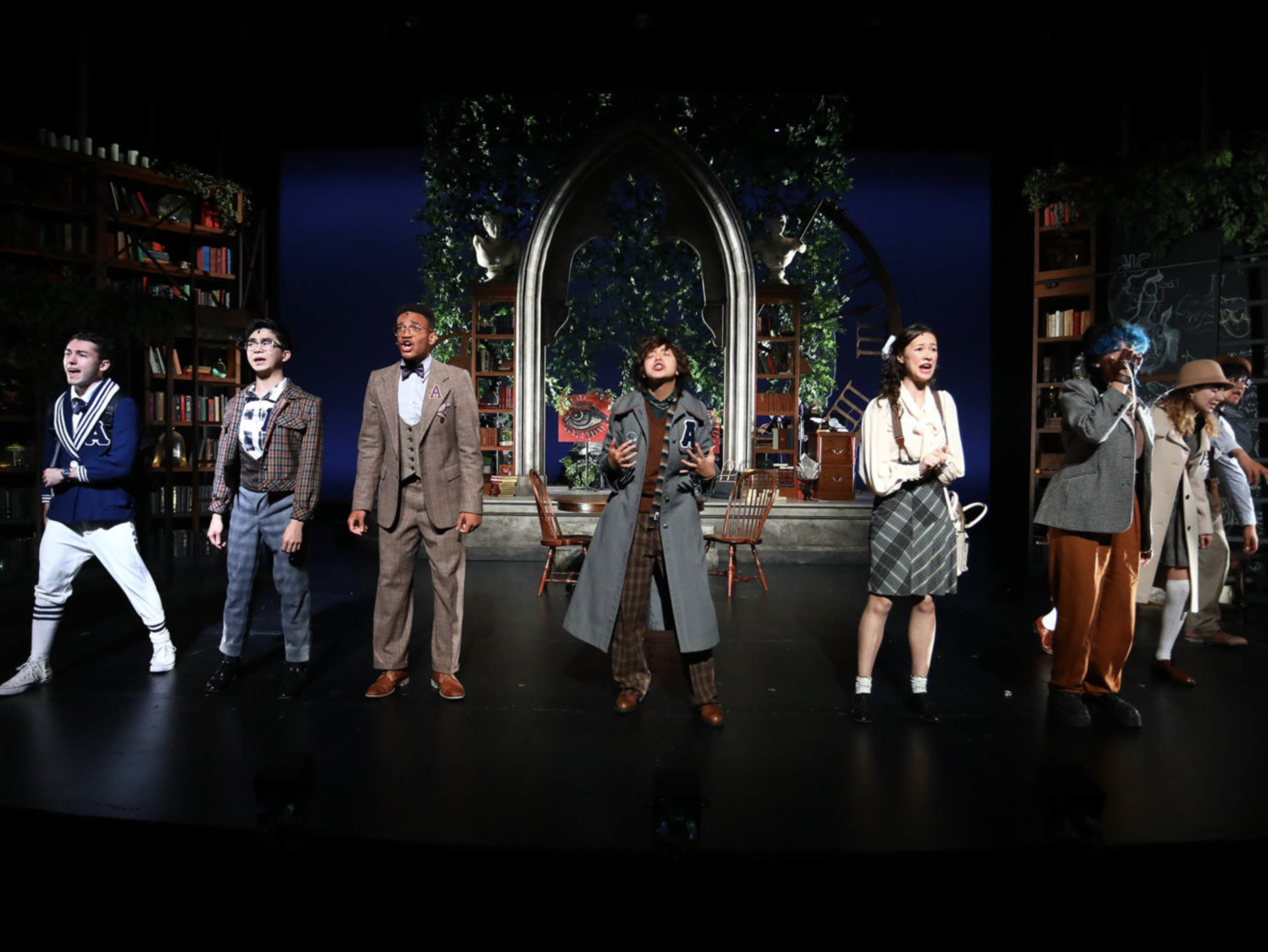 But the humorous (and telling) part of this musical is the mammoth list of content warnings that accompanies it. You can see them all at the link below (click on screenshot), and I’ll reproduce most of them

These content warnings are provided so that you can still consume the show if you want to avoid one or more of the content warnings. ‘Cues’ are visual changes onstage that you can use as a signal that a certain content warning will come up imminently. A ‘discussion’ is characters talking about the topic, while a ‘depiction’ involves an abstract staging of a character experiencing the topic (note that Adamandi does not feature any practical blood effects or gore). However, many of the content warnings are incorporated throughout the show, so please consider your overall comfort with murder, student death, Catholic guilt, and discussions of self-harm when deciding whether to see Adamandi.

Self-harm through burning is discussed during the scene where Portia and Quincy are on the stage left balcony (Act II), the scene after Quincy and Vincent talk to the Administration (Act II), and On The Other Side of Failure (Act II, cue: Quincy enters holding a broom). It is depicted abstractly during Litany of the Martyrs (Act II, cue: Saint Lawrence says “One life, one death, one hell’), and I Hate and I Love (Act II, cue: Quincy lights candles on the balcony).

Body/corpse mutilation is discussed in Oh, Ms. Reporter (Act II, cue: Vincent sits down in a chair at the lip of the stage) and implicitly depicted in the final scene of Act II (cue: the pyre is wheeled in)

Murder is discussed in the scene between Beatrix and Vincent in the newsroom (Act I, cue: Beatrix unlocks the file cabinet) as well as throughout Act II, and depicted abstractly at the end of Act I (cue: The ensemble sings ‘Me, Myself, and I’), and the end of Act II (cue: Quincy sings ‘I Hate and I Love’ for the second time)

I had to include this one:

Catholic guilt is discussed in the scene after A Little More In Love (Act I), Me, Myself, and I (Act I, cue: Vincent leaves the newsroom), and throughout Act II.

What’s the issue with “Catholic guilt”?

There’s also a “note from the writers” at the bottom about heeding the warnings above, and how to leave the theater if you can’t take it any more.

Note that, as far as I can tell, not one of these items is actually depicted in the play; they’re all simply discussed.  If mere discussion of something like “murder” or “internalized homophobia” is enough to send you running from the play, or not going at all, then you shouldn’t be reading the news or browsing online. Or even getting out of bed. And life doesn’t give you trigger warnings when there are “loud noises”.

The data seem to show, at any rate, that if you have a phobia about something like these issues, the best way to overcome it not to avoid it forever but is to expose yourself to it (preferably with advice from a therapist). For you never know when something like murder or suicide will crop up in conversation or on the news. But this obtains for things you can actually see or experience, like videos of murder or mutilation—not simply discussion of such issues. The evening news imparts you a warning like this when something gruesome is shown: “Note: some of the following video might be disturbing,” which seems appropriate. But it doesn’t do that when simply reporting on murder or violence.

Are any of these trigger warnings necessary? I’d say that if these things were actually shown, a short description on the website might be appropriate; something like this: “Note, this play includes discussion of elements like murder, suicide, gender dysphoria, and Catholic guilt.” But a long list like the one above, describing exactly where the discussions are, vividly underlines the fragility of the students and the helicopter-playwright nature of artistry these days.

Readers might amuse themselves by imagining the trigger warnings that accompany plays like “Hamlet”, or books like Madame Bovary, Anna Karenina, or Crime and Punishment. And what in the world do you do with paintings? After all, they’re right there before you, and if they have a trigger warning next to them, well, it’s already too late.

Here’s a video: TRIGGER WARNING: CATHOLIC GUILT TO THE MAX. (I love this song: one of Billy Joel’s best. It was issued in 1977.)

46 thoughts on “Content warnings to the max: Princeton drama jumps the shark”