Hey—it’s Friday, November 18, 2022, and most people get the next two days off. It’s National Vichyssoise Day, a day of cultural appropriation (it should be called “Liberty Soup”), as well as

It’s also Apple Cider Day, Independence Day in Morocco, celebrating the independence of Morocco from France and Spain in 1956, Push-Button Phone Day, and Micky Mouse Day, celebrating the first appearance of this rodent in the cartoon Steamboat Willie on this day in 1928. Here it is; Micky first appears 30 seconds in, and look for Minnie, also appearing for the first time:

Readers are welcome to mark notable events, births, or deaths on this day by consulting the November 18 Wikipedia page.

*The latest House vote, with some elections still undecided (from Five Thirty Eight):

As expected, Republicans have taken control of the U.S. House of Representatives, ending two years of Democratic rule in Washington, D.C. But what wasn’t expected was how narrow the Republicans’ majority would be.

Seven districts remain undecided: four where Democrats currently lead and three where Republicans do. If those leads all hold (which seems likely), Republicans will go into the 118th Congress with a 221-to-214 majority. 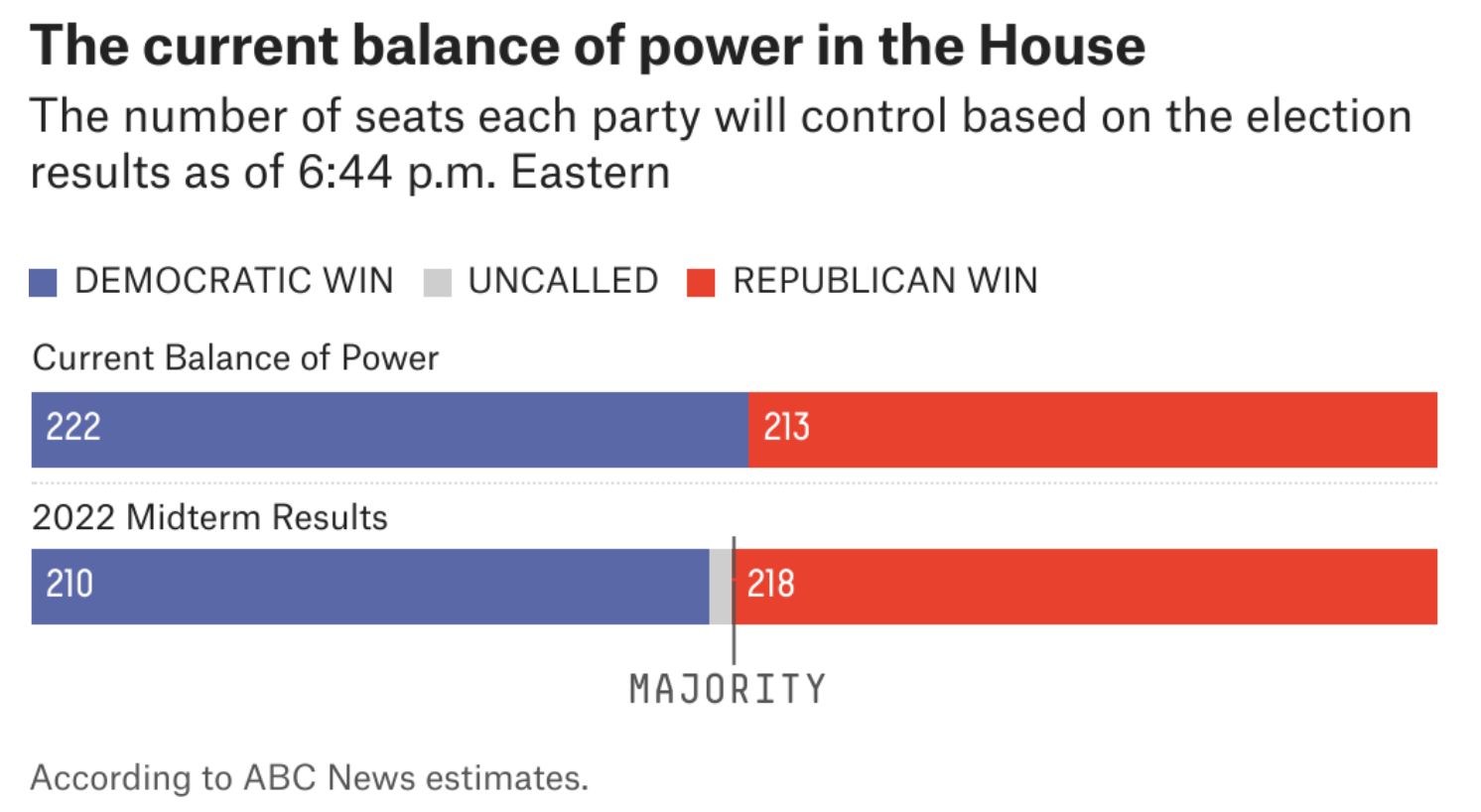 *As of January, Nancy Pelosi will no longer be Speaker of the House, but she’s decided not to be any kind of Democratic leader in the next Congress, including minority leader or minority whip; she’s giving way to younger folk. The NYT article excerpted below has a video of her gracious announcement. She done good. (Read Michelle Cottle’s NYT op-ed, “Nancy Pelosi, Badass.”)

Speaker Nancy Pelosi, the first woman to serve in the post and the face of House Democrats for two decades, will not pursue a leadership post in the next Congress after Republicans take control, ending a historic tenure in which she oversaw major legislative accomplishments and led her chamber as it was threatened by rioters who stormed the Capitol.

“For me the hour has come for a new generation to lead the Democratic caucus that I so deeply respect,” she said in a speech on the House floor on Thursday, setting off a rapid and long-anticipated shift in the top ranks of Democratic leadership. “And I am grateful that so many are ready and willing to shoulder this awesome responsibility.”

*Meanwhile, the electoral contest between the most embarrassing member of Congress, Lauren “Heat-packing Momma” Boebert and her Democratic opponent, Adam Frisch, is still undecided, with Boebert leading by only 0.034%: about 1,100 votes. This is one election I really wanted the Republicans to lose, but it may go to a runoff, and, worse, she may win:

The closest House race in the nation has unspooled in unexpected territory: western Colorado.

The [vote] total has remained stagnant for much of the past week because of two factors.

One, mail ballots from members of the military and Americans living overseas were allowed to arrive as late as Wednesday. And also, voters whose ballots were rejected for reasons like mismatched signatures had until Wednesday to correct those problems, a process known as curing. Democrats and Republicans alike have been pleading with voters to complete that process.

Since ballots that have been cured, or that have come from overseas or the military, can be counted now, updated results are expected on Thursday. A full accounting is anticipated by Friday, which is the deadline for counties to submit their tabulations to the Colorado secretary of state.

If, at that point, Ms. Boebert or Mr. Frisch leads by a large enough margin, The Associated Press could call the race. But if the race stays close, a recount is probable, which would further delay a call — possibly for weeks.

Under state law, a recount is mandatory if the margin is half a percentage point or less. That recount must be ordered by Dec. 5 and would need to be completed by Dec. 13, according to the secretary of state’s office.

Oy! The odds are she’ll win on a recount, and then we’re stuck with her for two more years.

*Remember that fraudster Elizabeth Holmes will be sentenced today for her role in the Theranos startup scheme; she was convicted on four counts of wire fraud and faces a maximum of 20 years on each count. She’ll get less than that

Elizabeth Holmes, the founder of disgraced blood-testing company Theranos Inc., has asked a federal judge for leniency for her fraud crimes, positioning herself as a loving mother and selfless community servant.

Loving my tuchas! The only person she ever loved was Elizabeth Holmes herself. But I digress:

Ms. Holmes, who has asked for a sentence of home confinement and community service, and no more than 18 months in prison, faces an uphill battle when she appears for sentencing in a San Jose, Calif., federal court Friday, according to defense attorneys who have followed her case.

Government lawyers who prosecuted Ms. Holmes have asked for a 15-year prison sentence, a three-year supervised release and more than $800 million in restitution. A probation officer tasked with an independent report recommended Ms. Holmes receive a nine-year prison sentence. U.S. sentencing guidelines that the judge must consider recommend the equivalent of life in prison for offenders guilty of fraud conspiracies as large as Ms. Holmes’s.

Larry Levine, a former federal inmate who now runs Wall Street Prison Consultants, says Holmes would be lucky to get 15 years and not more, considering the dollar amount involved alone. He said there are a number of enhancements Holmes could receive under federal sentencing guidelines, too, given that her crimes were sophisticated, involving multiple conspirators and multiple victims.

FOX Business asked Levine about the prospect of Holmes receiving a lenient sentence.

“You’ve got a better chance of Jesus coming back in front of you right now and being knighted by the king than her getting 18 months,” Levine suggested.

*WNBA star Britney Griner is now in a penal colony, but fortunately not in Siberia. Still, it sounds grim:

The American basketball star Brittney Griner was transferred to a penal colony outside Moscow on Thursday, her lawyers said, where she will begin to serve a nine-year prison term after a Russian court convicted her on a drug charge.

Ms. Griner, 32, had been moved to the IK-2 female penal colony in the small town of Yavas, about 300 miles southeast of Moscow, the lawyers said in a statement. According to the website of the Russian prisons’ service, the colony is capable of holding 820 inmates.

“Brittney is doing as well as could be expected and trying to stay strong as she adapts to a new environment,” the lawyers, Maria Blagovolina and Aleksandr Boikov, said in the statement, adding that this is “a very challenging period for her.”

. . . A 2017 article by Moskovsky Komsomolets, a Russian newspaper, described widespread torture, harsh beatings and slave labor conditions in the IK-2. Inmates often work from 7 a.m. until midnight or later and are not allowed to use a washroom, the article said, quoting former inmates.

*I offer this in passing, because for some reason it’s big news (it’s in the Washington Post as “breaking news” and was on the NBC News last night. Apparently Swift herself canceled the sale, as fans were in an Internet crush to buy them, and tickets were going for as high as $3,400!  I can’t be bothered to learn more.

Due to extraordinarily high demands on ticketing systems and insufficient remaining ticket inventory to meet that demand, tomorrow's public on-sale for Taylor Swift | The Eras Tour has been cancelled.

*The BBC reports on the most bashed-in bridge in the UK:

A bridge that has been hit 33 times in the last 12 months has been named the most-bashed in Britain.

The 7ft (2.1m)-high Stonea Road bridge near Manea, Cambridgeshire, has become well-known locally for being struck.

There were 1,833 bridge strikes across Britain’s rail network in 2021-22, according to Network Rail. 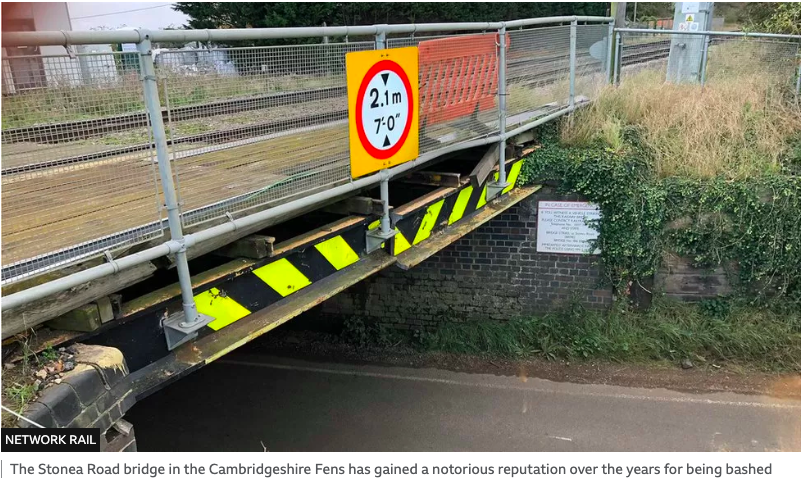 Meanwhile in Dobrzyn, Hili’s out with Baby Kulks, though they’re still not friends. (Hili will tolerate Kulka, but that’s the first step. . . )

Kulka: They are taking photos of us.
Hili: I see.
(Photo: Paulina) 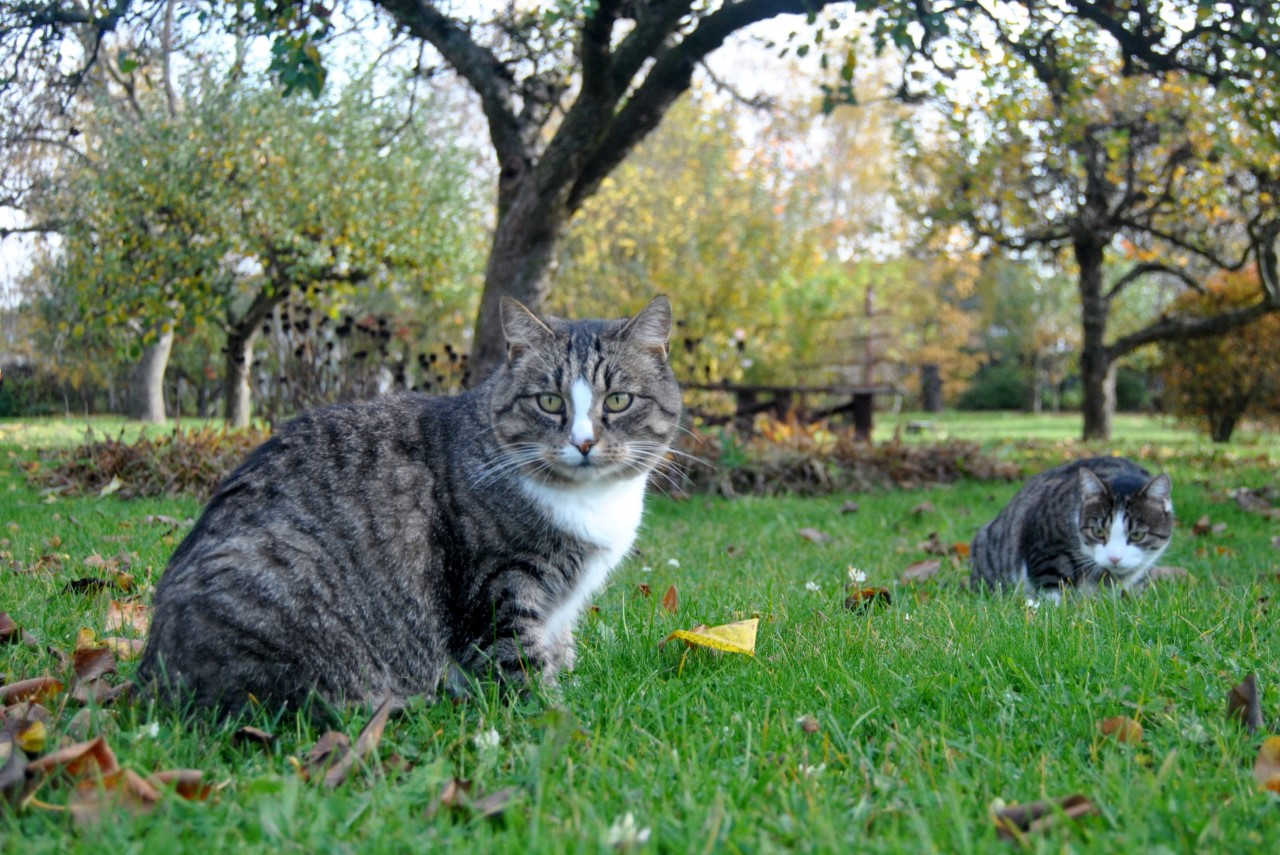 A Jewish LOLcat has a question (from Malcolm): 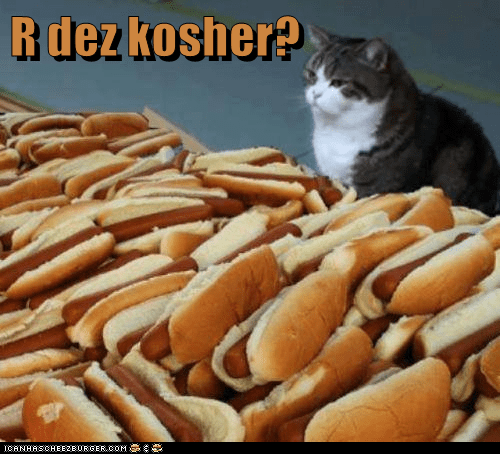 From Merilee, a Christmas tree for cat owners: 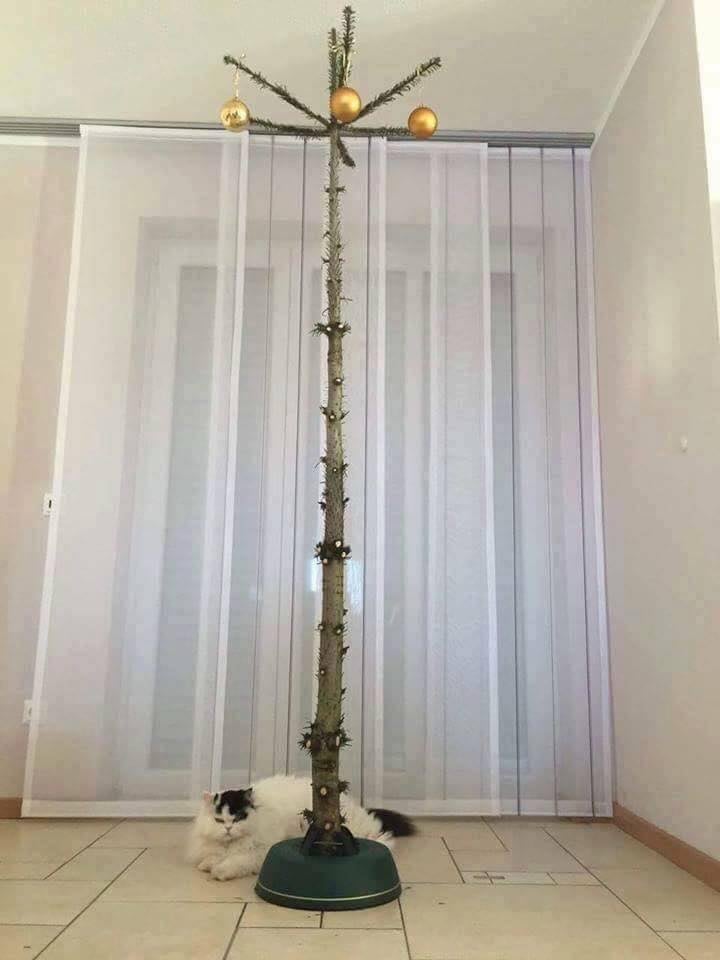 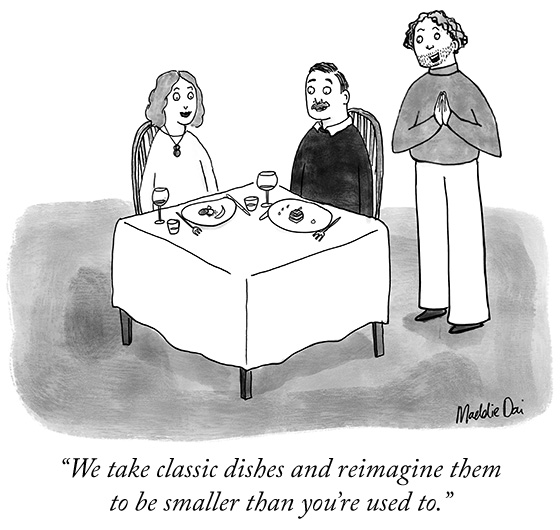 This was retweeted by God, who is on the side of the dissidents battling the Iranian government (note: the first picture, apparently showing the dead child, is potentially disturbing):

He is speaking by the grave of his son #Mohammad_Hasanzadeh : "before for conveying conscientious bravery we used the epithet "manly" now we have to describe a brave man we must say he is a "womanly" man. For women's zeal and honor is more than men's."
God I am alive to see this! https://t.co/4wNjwp39oA

From Malcolm. The linked article is worth reading:

Russia is basically failed state. Most Russians know that. That is why they leave in droves. Russia already faced a Demographic catastrophe before, but the (open) war in Ukraine was the last straw.https://t.co/uHu1ePFQdS pic.twitter.com/gcb3RGHwdj

From Luana: God is speaking directly here, saying that Biden stole the election (sound up):

Prophet Julie Green, who shares the stage with Eric Trump & Michael Flynn on the ‘Reawaken America’ tour, usually reads the messages she gets from God. But this time God speaks directly through her, and God says he is about to overturn this election. pic.twitter.com/XDUNmLlp3C

From Gravelinspector: the work of a medieval scalawag artist (at least the cat looks like a cat):

A cat. Cosplaying as a nun. In a medieval manuscript.
This is EVERYTHING.#medievalstuffwithcats #nuntastic pic.twitter.com/5Ub41SVmJd

From the Auschwitz Memorial, a girl gassed at age four

She arrived at #Auschwitz on 2 September 1943 in a transport of 1,004 Jews deported from Westerbork. She was among 498 of them murdered in a gas chamber after the selection. pic.twitter.com/CiWAaOQvuF

Tweets from the famous Dr. Cobb. It’s weird duck season. Look at the one in the second tweet!

Paleontological evidence for early cooking of fish (780,000 years ago!):

'Comparing the results with other fish fossils, they found that the teeth from the key area of the lake were subjected to a temperature of between 200-500C (400-930F). That is just the right range for well-cooked fish.' 🐟🐟🐟 https://t.co/kesfj1qjr3