Welcome to Sunday, October 16, 2022: National World Food Day, celebrating the UN’s creation of United Nations Food and Agriculture Organization on October 16, 1945. It’s also National Liqueur Day, National Dictionary Day, and, best of all, Global Cat Day. To celebrate, here’s a picture of me with my late cat Teddy, discovered, scanned, and sent to me by an old friend: 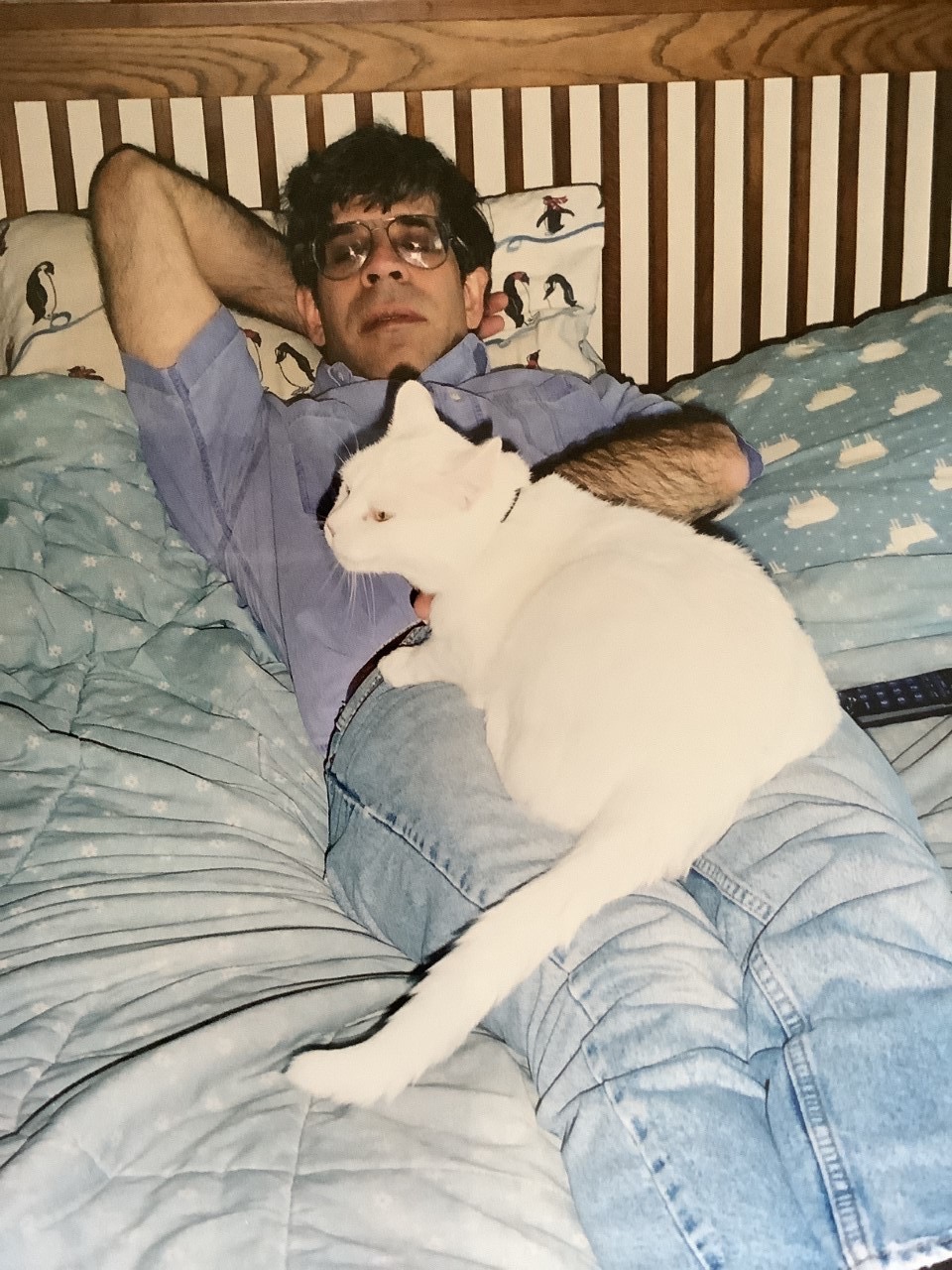 And to make it global, here I am some years ago in the Mani in Greece, holding up a feral cat at a fish restaurant. I believe i named it Odysseus: 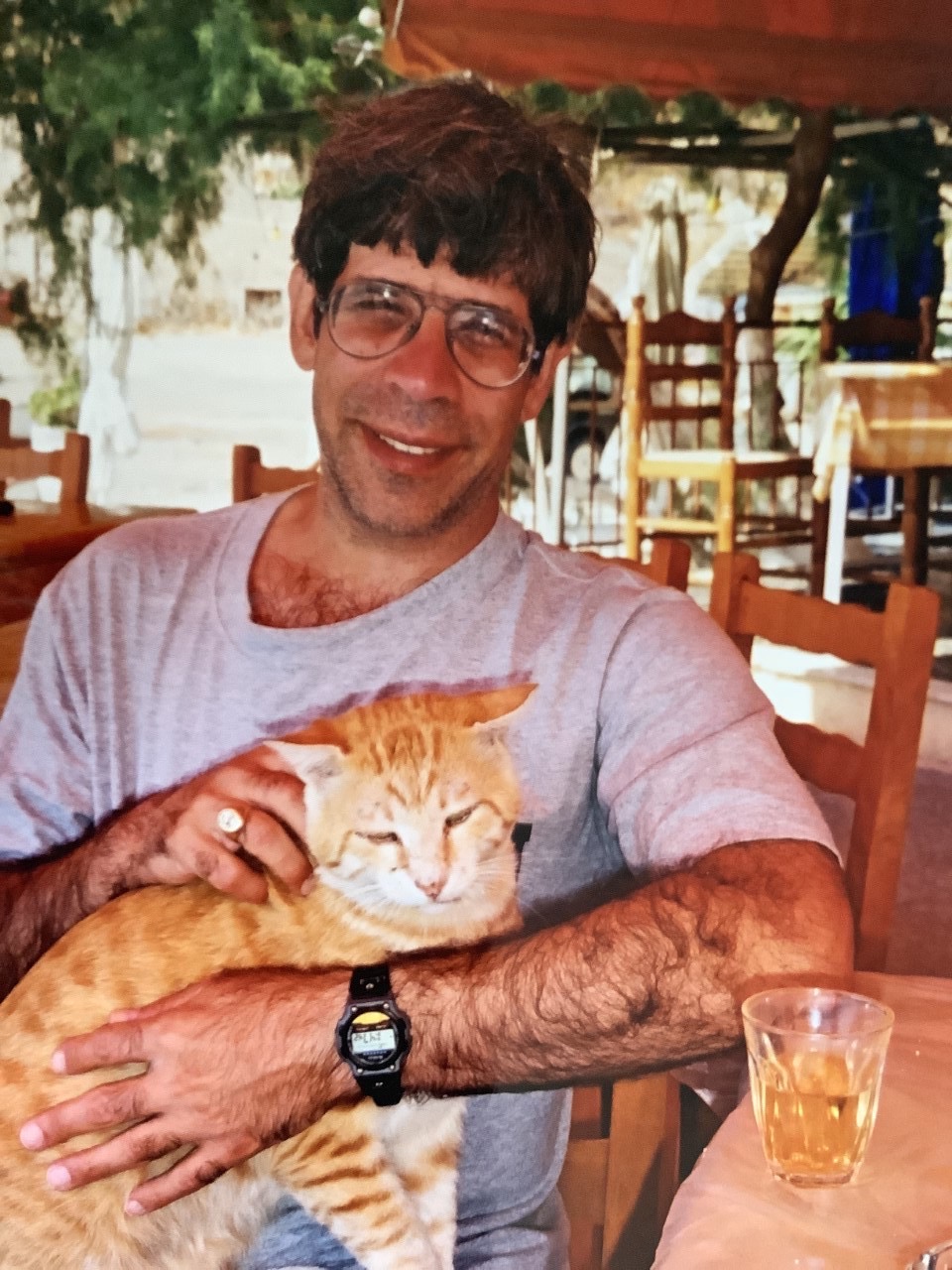 *In the news, climate-change activists threw two cans of tomato soup on a van Gogh painting of sunflowers at London’s National Gallery.  Click to read the story: 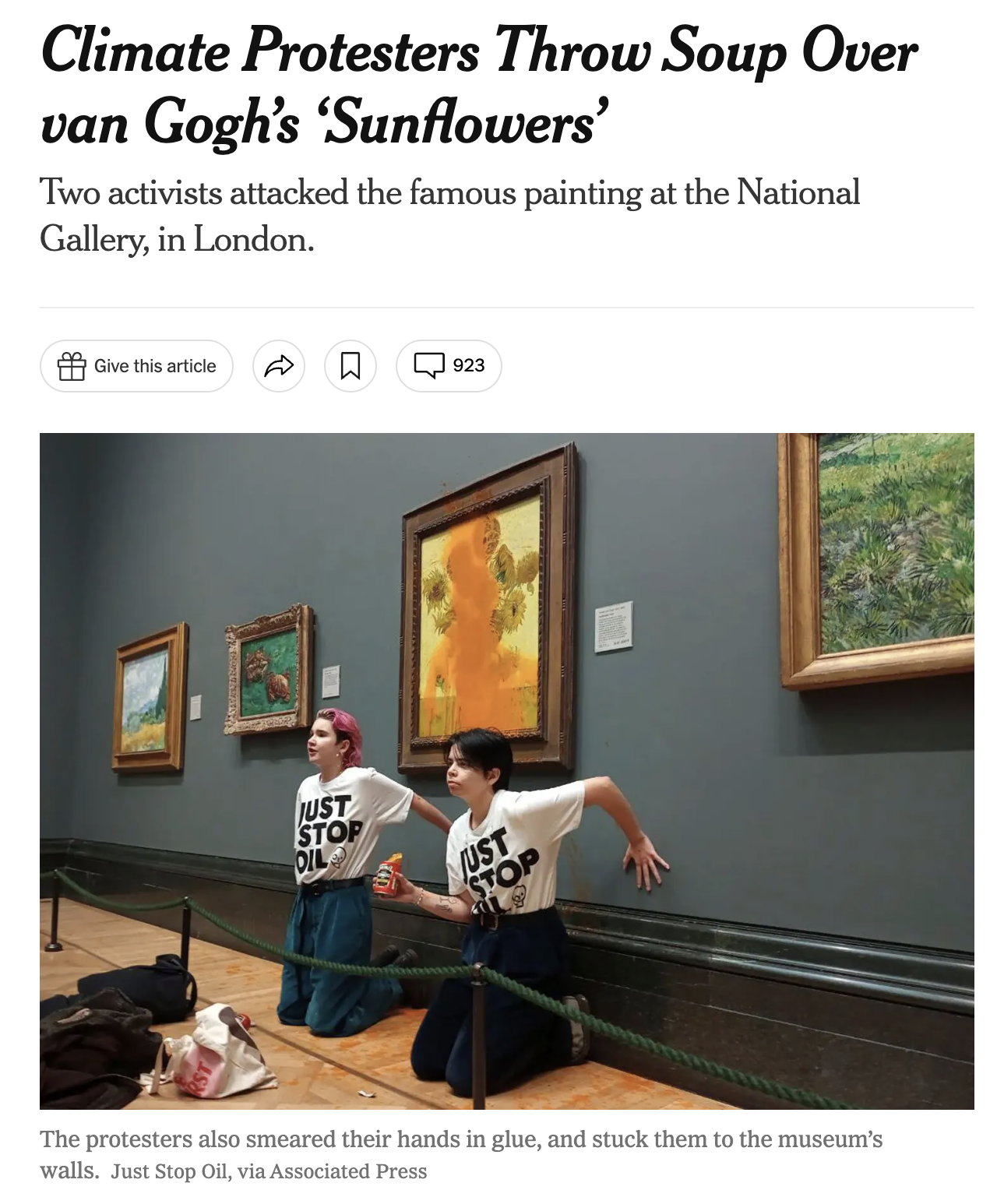 Fortunately, there was glass in front of this famous painting (van Gogh did several versions of “Sunflowers”), so only minor damage was done to the frame, while the two miscreants glued their hands to the wall. They were both arrested.

At just after 11 a.m. on Friday, two members of Just Stop Oil, a group that seeks to stop oil and gas extraction in Britain, entered room 43 of the National Gallery in London, opened two tins of Heinz cream of tomato soup, and threw them at Vincent van Gogh’s “Sunflowers,” one of the treasures of the museum’s collection. It is one of six surviving images of sunflowers that van Gogh made in 1888 and 1889.

As the gloppy orange liquid dripped down the glazing that was protecting the painting, the pair smeared their hands with glue and stuck themselves to the wall beneath the work. In videos of the incident posted online, gallery visitors can be heard saying “Oh, my gosh!” and calling for security; one of the activists delivers a speech in which they ask visitors whether they “are more concerned about the protection of a painting, or the protection of our planet and people?”

. . .Mel Carrington, a spokeswoman for Just Stop Oil, said in a telephone interview that the group’s intention had been to generate publicity and to create debate around the climate crisis and the actions needed to stop it.

Van Gogh’s “Sunflowers” had nothing to do with climate change, she said. It was simply “an iconic painting, by an iconic painter” and an attack on it would generate headlines. But the choice of soup was more symbolic, Carrington said: In Britain, many householders were struggling to pay fuel and food bills because of soaring inflation, and some could not even afford to heat up a can of soup. The government should be helping ordinary people deal with “the cost of living crisis,” rather than enabling fossil fuel extraction, she added.

Is there anybody willing to defend this group, or the two morons who threw the soup? I found only one comment in the NYT defending the action, but I didn’t read all 972 comments. The painting had nothing to do with oil, van Gogh is one of the world’s most beloved artists, and the defacing will do nothing but degrade the “Just Stop Oil” group.

*Once again the Washington Post’s staff writer Aaron Blake lists the top ten Democratic Presidential candidates for 2024, which at this point serves only as an amusing exercise in prognostication. Here they are from 1 to 10, with their position in the last ranking given) in parentheses.

On the one hand, she said, she wants to believe someone like her could run and win. “But at the same time,” she said, “my experience here has given me a front-row seat to how deeply and unconsciously, as well as consciously, so many people in this country hate women. And they hate women of color.”

But let’s face it: if Uncle Joe wants to run in 2024, the Dems will let him.  However, someone should talk him out of it. He’s done a good job before, but I don’t want the President to die in office.

*In another sign of the boldness of Iranian protestors, demonstrators against the government set Tehran’s notorious Evin Prison, site of many a torture, rape, and murder, on fire yesterday.

Since opening five decades ago under the shah, Evin Prison has been a symbol of political repression in Iran. It is the detention center for an untold number of protesters who have demonstrated against the Iranian government since the Sept. 16 death of Mahsa Amini, a 22-year-old woman in police custody for allegedly not adhering to strict Islamic dress code, authorities said.

Violence erupted Saturday between detained protesters and Evin Prison guards, with a sewing workshop being set on fire, according to Iran’s state media. Smoke could be seen rising from Evin Prison in northern Tehran, and gunshots and explosions could be heard on numerous videos shared on social media.

. . . The blaze and unrest among Evin prisoners demonstrated how the uprising against the Iranian government has become the biggest challenge of President Ebrahim Raisi’s young government. The protests started with Ms. Amini’s death and focused on the country’s mandatory hijab, or headcovering, for women, but they have morphed into something larger, calling for the end of the strict Islamic governance ushered in with the country’s 1979 revolution.

Here’s a tweet with a video of the unrest:

And I predict, with less confidence than usual, that the Islamic government will indeed meet its end, perhaps in just a year or so.

*Disgraced startup fraudster Elizabeth Holmes, creator of Theranos, now has her sentencing hearing for wire fraud scheduled for November 18. She could face years in prison, though the fact that she has a kid may reduce her sentence. She also has a  hearing for a new trial on Monday, though it’s unlikely her bid will succeed. Her sentencing has been delayed twice before:

After a jury convicted Holmes in January on four counts of defrauding investors out of more than $144 million, Holmes’ sentencing has been delayed twice. Originally, she was to be sentenced Sept. 26, then the date was pushed to Oct. 17. On Wednesday, Judge Edward Davila in U.S. District Court in San Jose set the new date, with the hearing to start at 10 a.m. in the courtroom where her four-month trial took place.

Holmes, 38, founded the blood-testing startup in 2003.  The company closed in 2018 after a 2015 newspaper exposé led to federal investigations. Holmes in 2018 was banned for 10 years from serving as an officer or director of a public company and agreed to pay a $500,000 fine in a deal with the U.S. Securities and Exchange Commission. The jury acquitted her on charges of defrauding patients.

I don’t think she’ll get another trial this time, but she’s canny, and I’m wondering if she’ll somehow manage to flee the country before she goes to jail.

*Finally, a MAN BITES DOG STORY!  From the “oddities” section of the Associated Press, we get this:

Police in Germany said Friday they detained a man for resisting arrest and biting a service dog.

Officers were called to a dispute between two 29-year-old men and a 35-year-old woman in the western town of Ginsheim-Gustavsburg shortly after midnight.

The trio acted in an “extremely aggressive and uncooperative” fashion, police said in a statement. Officers were only able to overpower one of the men by using “massive physical force,” it said.

“In the course of resisting arrest the 29-year-old man also bit a police dog,” the statement said, adding that the canine did not sustain any injuries.

Meanwhile, the 35-year-old woman injured a police officer with a punch to the face.

All three were detained and spent the rest of the night in jail to sober up.

Lock ’em up! No biting of animals!

Szaron: Is there anything left in your bowl?
Hili: You will learn when I go away. 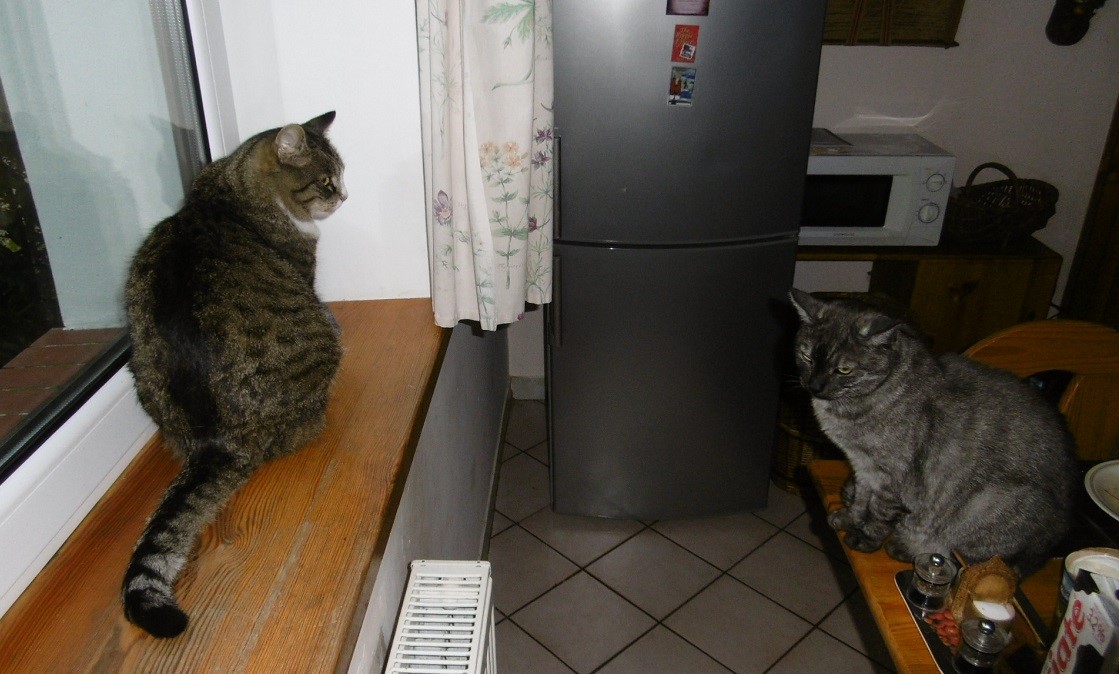 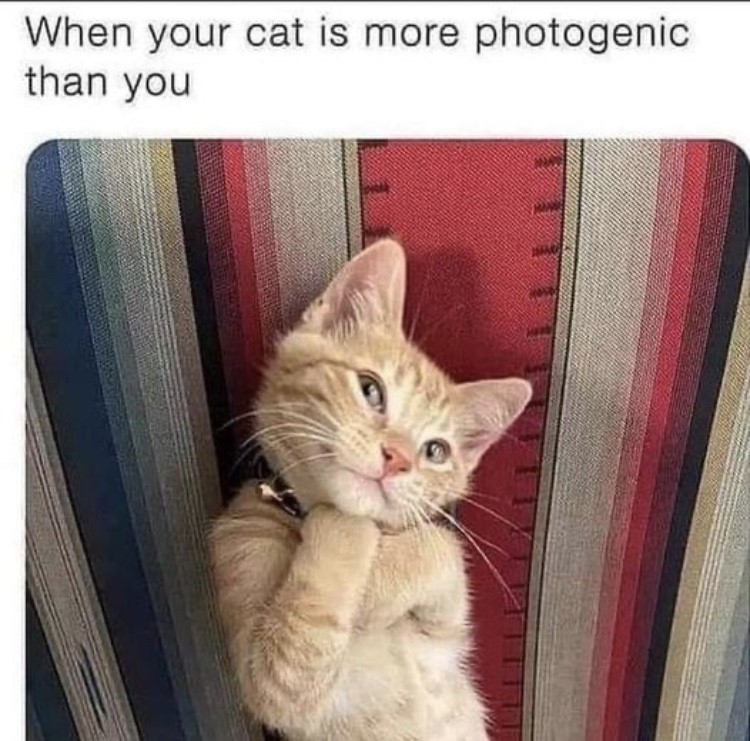 From Merilee: a present for a cat on its birthday: 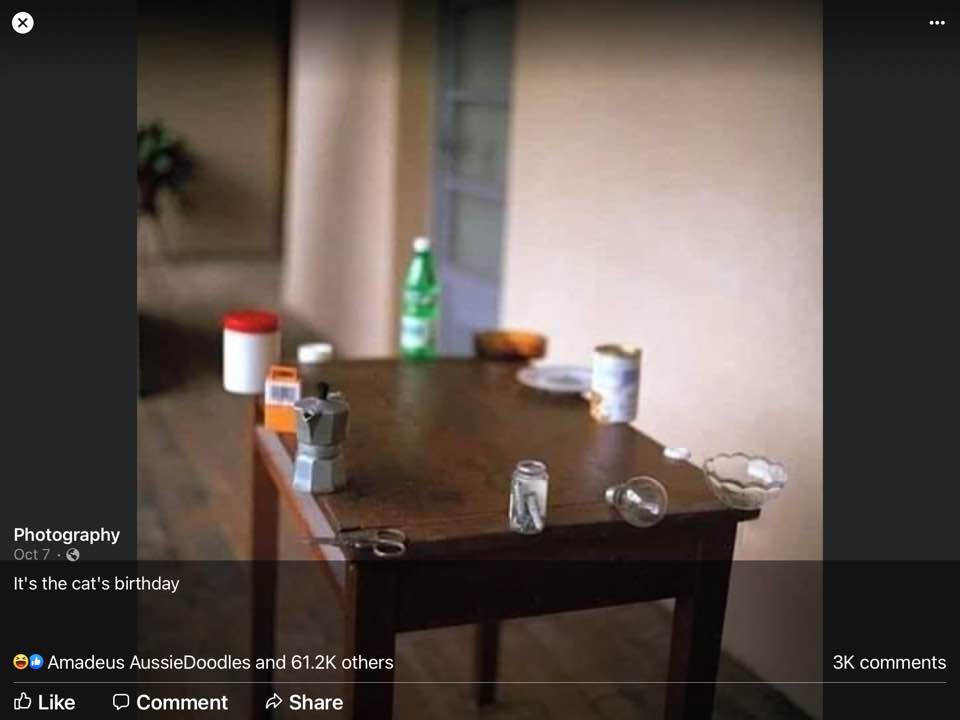 From Masih. If the Iranian regime is overthrown, cellphone cameras will have played a big role. Look at this brutality!

Horrifying. The Islamic Republic security forces beating and abducting peaceful protesters and shoving them in the trunk of the car.
This is a crime against humanity.
People just protesting the murder of #MahsaAmini. pic.twitter.com/QvrjDGY17l

A tweet from reader Ken, who notes, “This one made me laugh. (Haven’t the poor Hurricane Ian survivors suffered enough without having to be exposed to Ron DeSantis in this outfit?)”

From Simon: A lovely photo of Autumn in Chicago (Simon says the guy has lots of good Chicago photos):

In October 1942 she was deported to #Auschwitz and murdered in a gas chamber after the selection. pic.twitter.com/nBobWQxqve

Tweets from Matthew. The second one is wonderful: 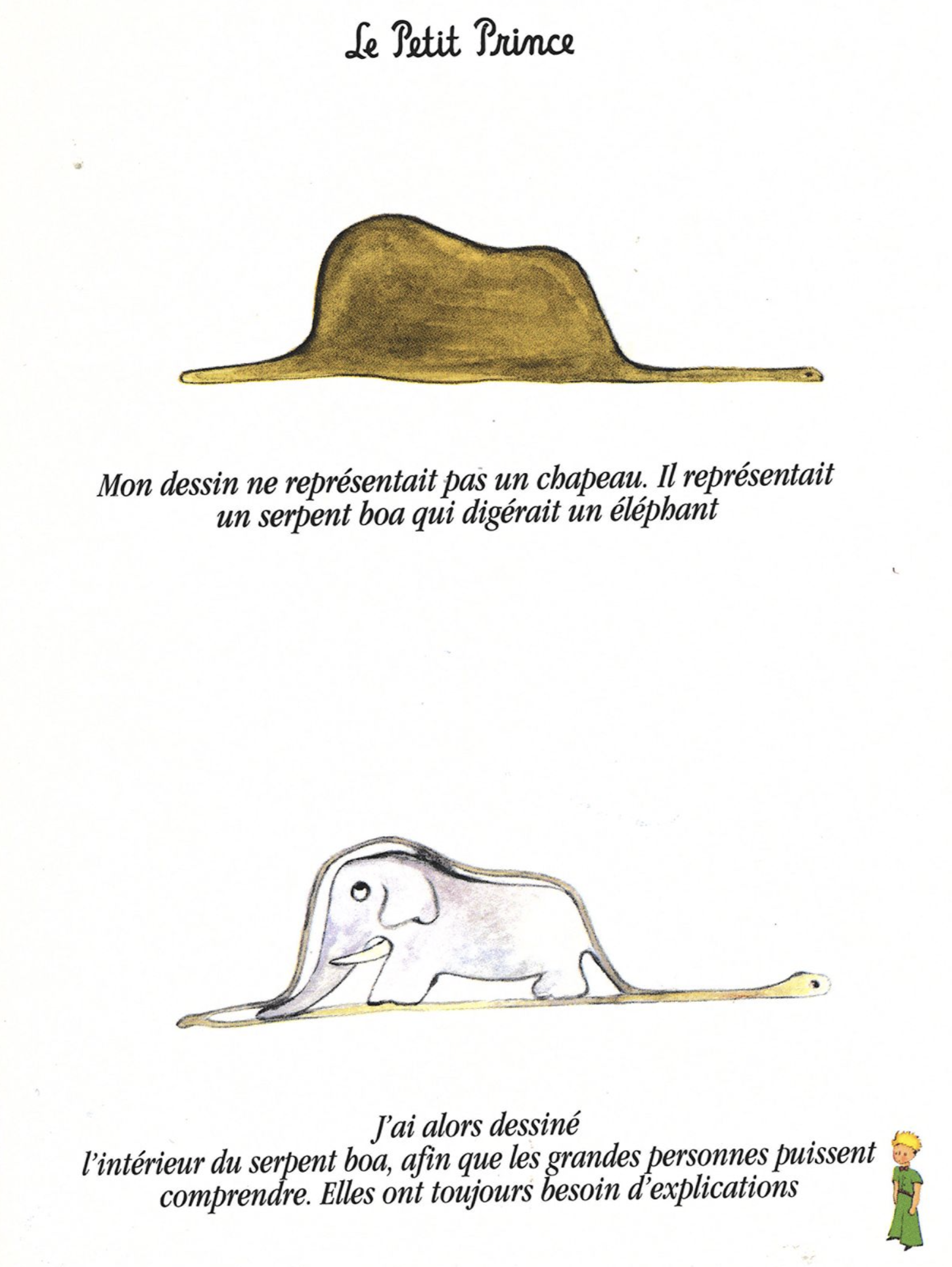 This, on the other hand, is not so wonderful:

the faces of youth killed in iran during the recent uprisings (via @amnestyiran) pic.twitter.com/zxER4Ebrxw

A pair of stars just over 5,000 lightyears away called Wolf–Rayet 140 orbit each other such that, every eight years, they come close enough that their stellar winds meet, compressing the gas and dust they naturally release into shells.