Today we have some photos from a regular, Mark Sturtevant. Mark’s IDs and captions are indented, and you can enlarge the photos by clicking on them.

This set wraps up my WEIT-worthy pictures from 2020. They were all taken near my home in eastern Michigan.

A common sight in the woods are these fungus-like buttons on damp logs. But these are not fungi. Rather, they are the fruiting bodies of slime mold colonies. Slime molds are amoeba-like social protists that on occasion gather together like this to then cooperatively disperse as spores. Younger fruiting bodies of this species are pale, white and sticky. Seeing those scattered in the woods probably inspired their common name which is wolf’s milk slime mold (Lycogala epidendrum). 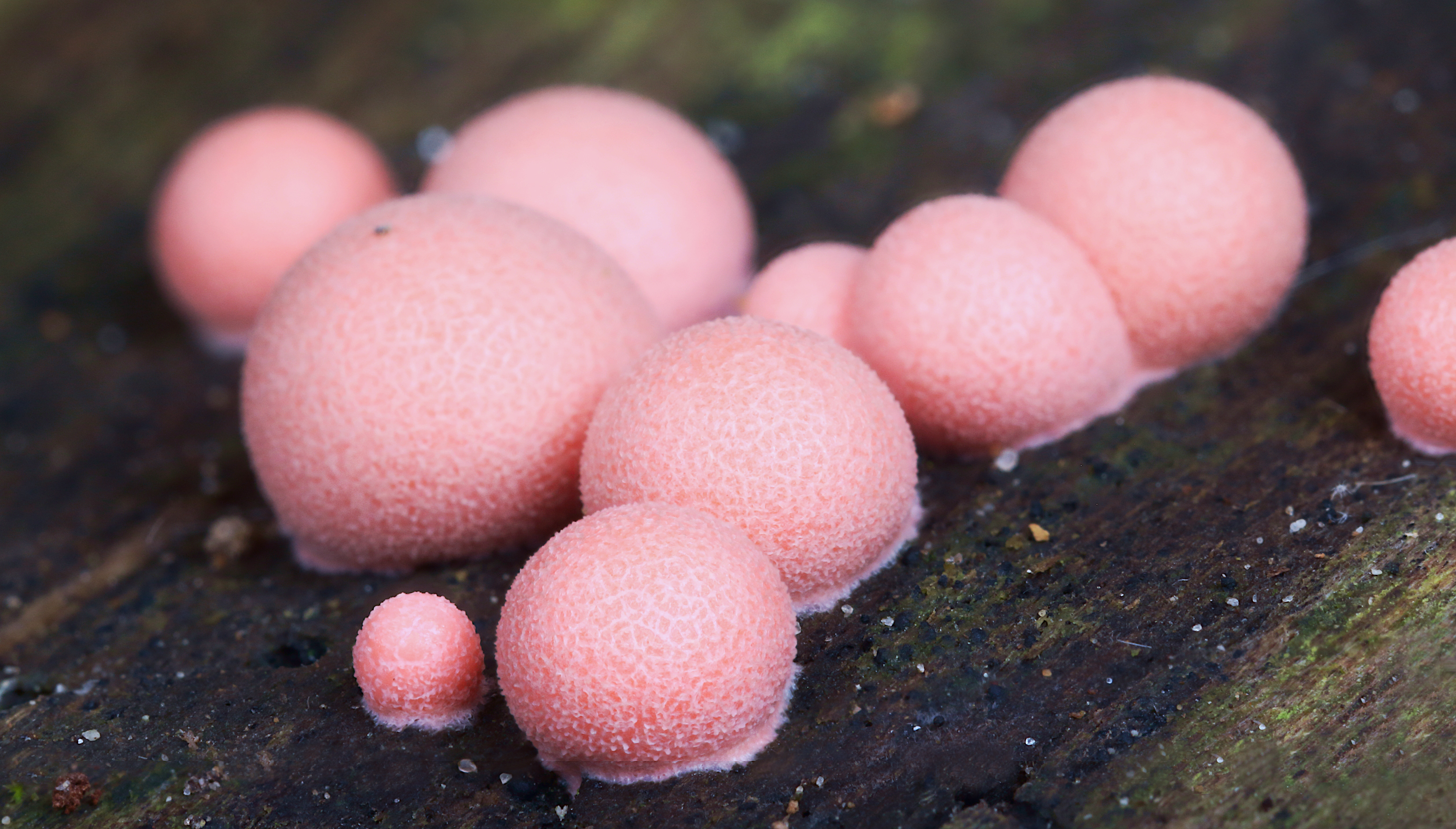 We now move on to insects. Here is a very large and surprisingly attractive cranefly. This is the giant eastern cranefly, Pedicia albivitta. 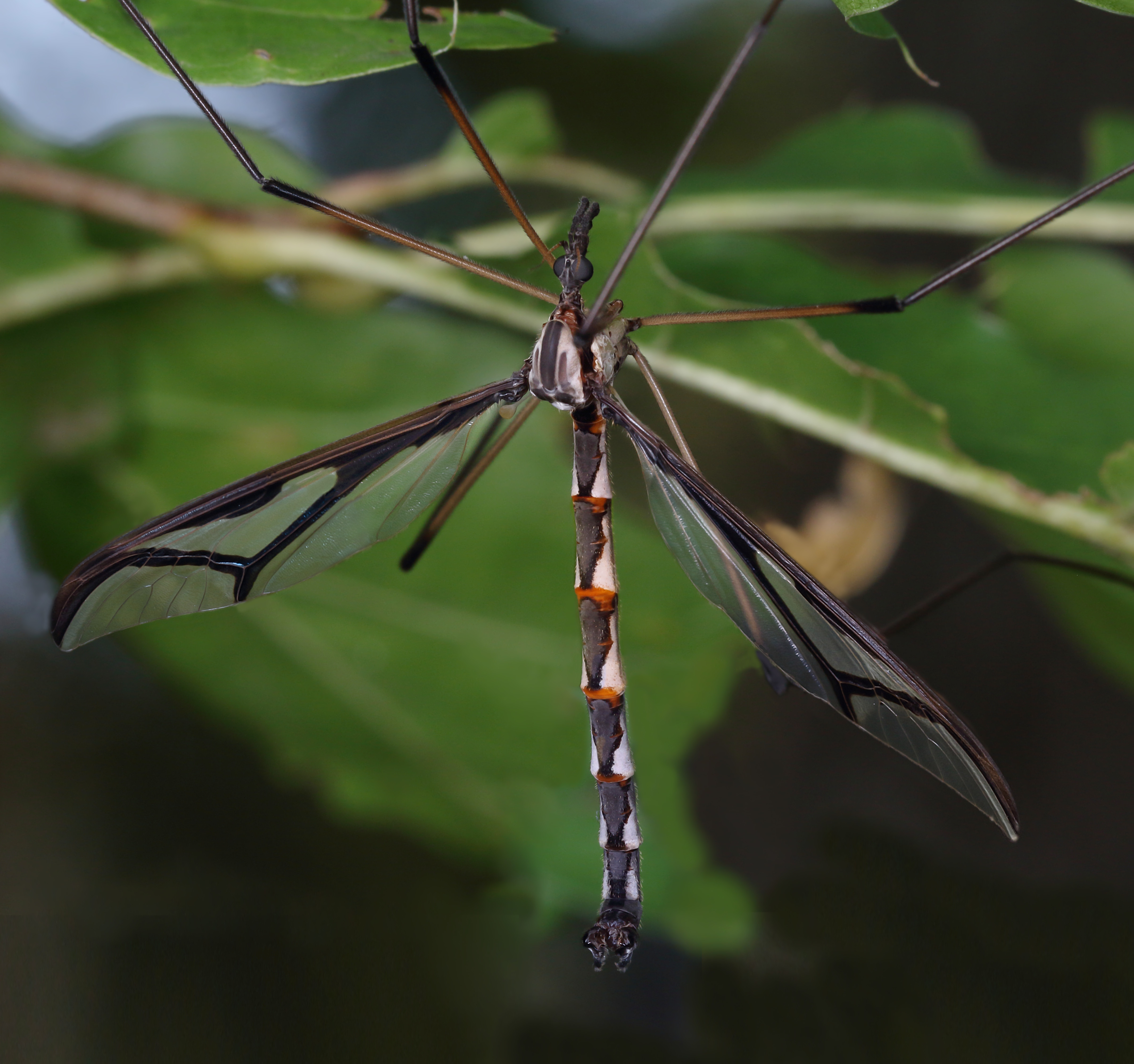 During their immature stage, dragonflies and damselflies are called naiads. They live in the water to hunt insects and sometimes small fish, and after they emerge to become adults their cast skins are left hanging on vegetation and tree trunks near the water. I had come across this large naiad cast skin and was able to identify it as belonging to our royal river cruiser dragonfly (Macromia taeniolata) – a lovely species that I had featured here many times. One can definitely say that their immature stage is beautifully ugly, complete with sharpened armor plates and horns coming out of their eyes. The face looks strange because naiads capture their prey with an elongated and hinged lower jaw (the maxilla in official terms) that is normally folded away under the chest. When prey are in range, this is snapped forward to grab them up. One can imagine that this face would be the last thing that some minnows will see! 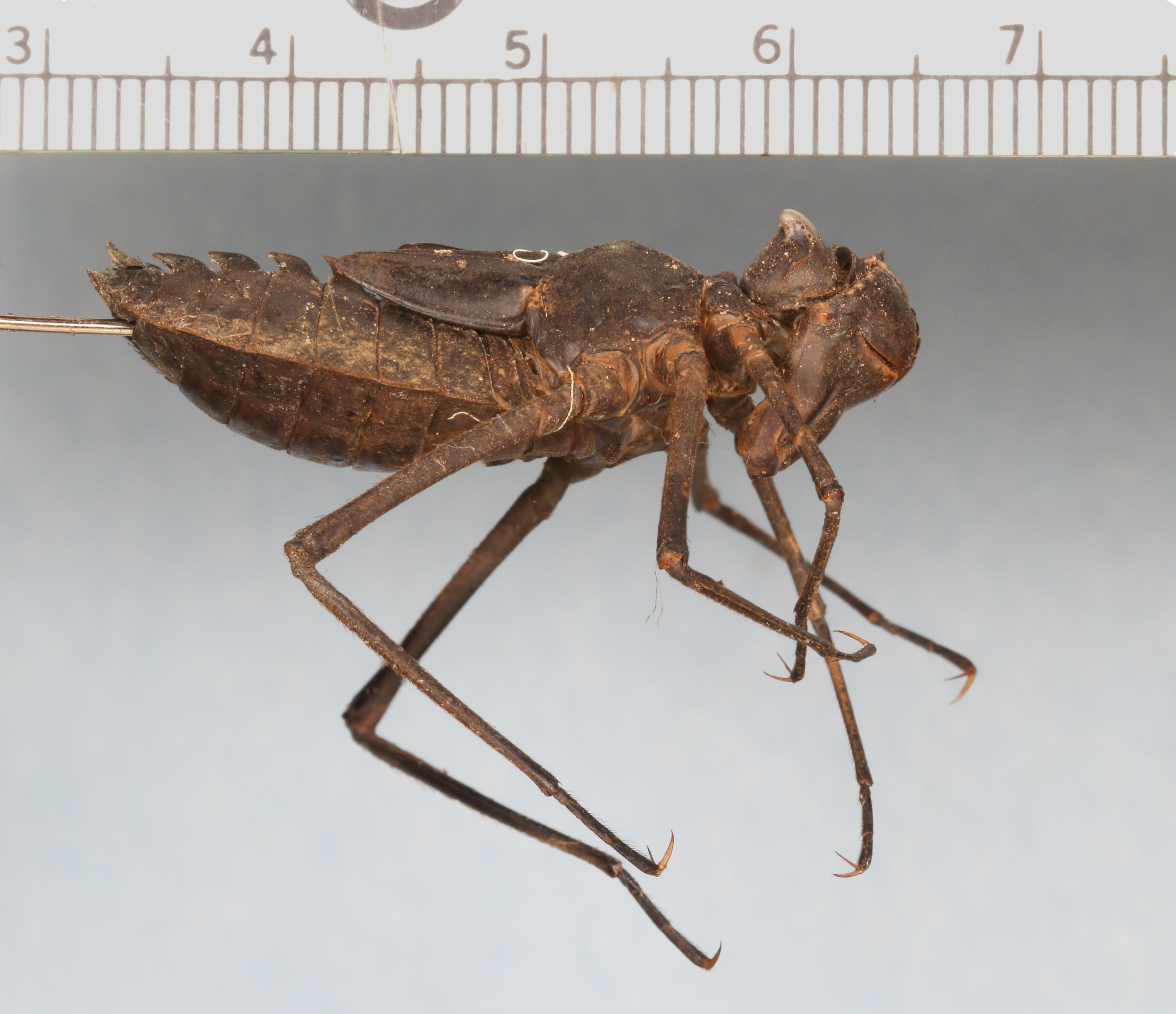 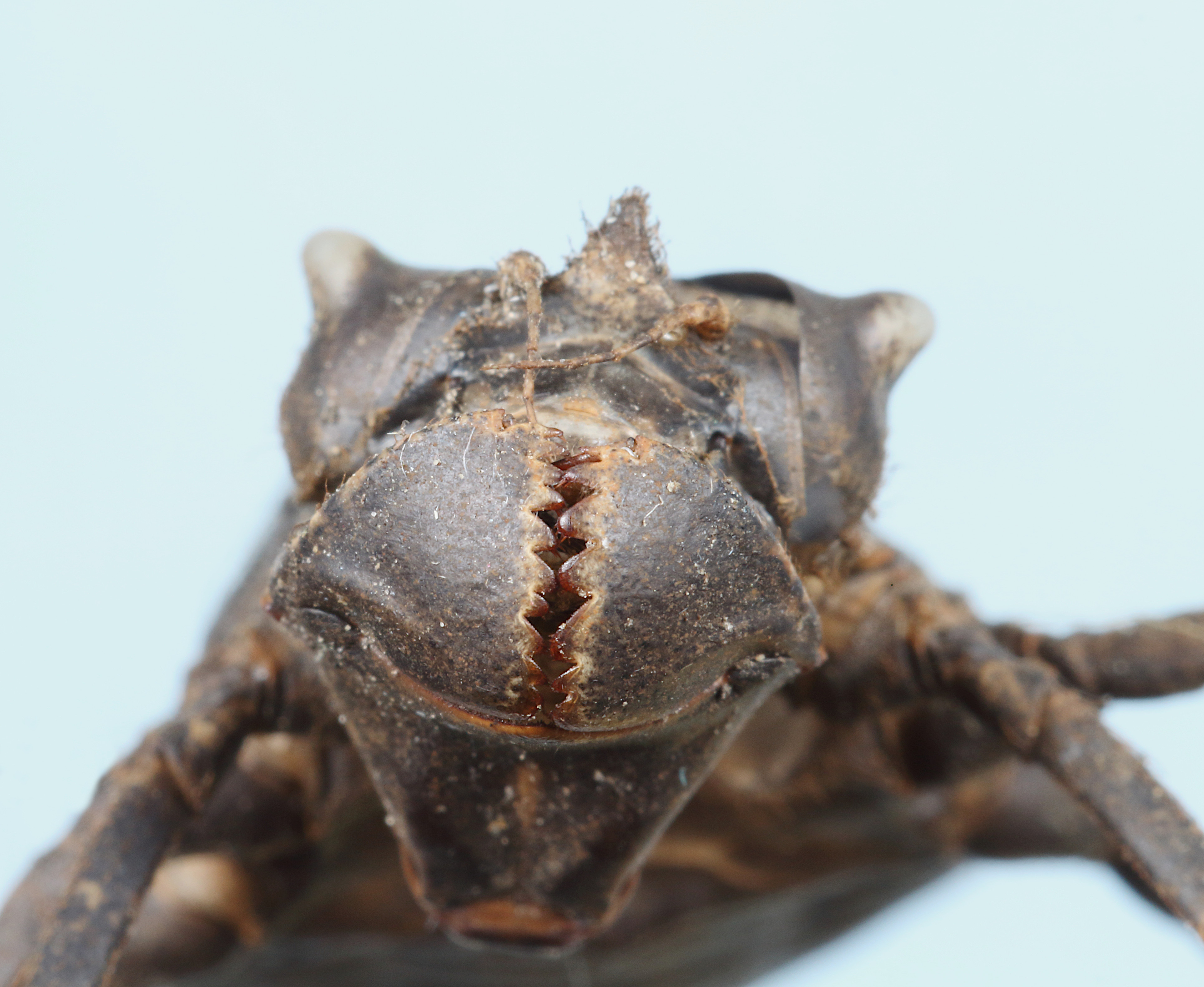 Next are pictures of one of my favorite damselflies, the American ruby spot damselfly (Hetaerina americana). Many pleasant summer afternoons are spent sitting on river banks, patiently waiting for them to venture close enough for pictures. The first is a female and the second picture is a male. Like many Odonates, females are easy to get close to, but males are considerably more skittish. 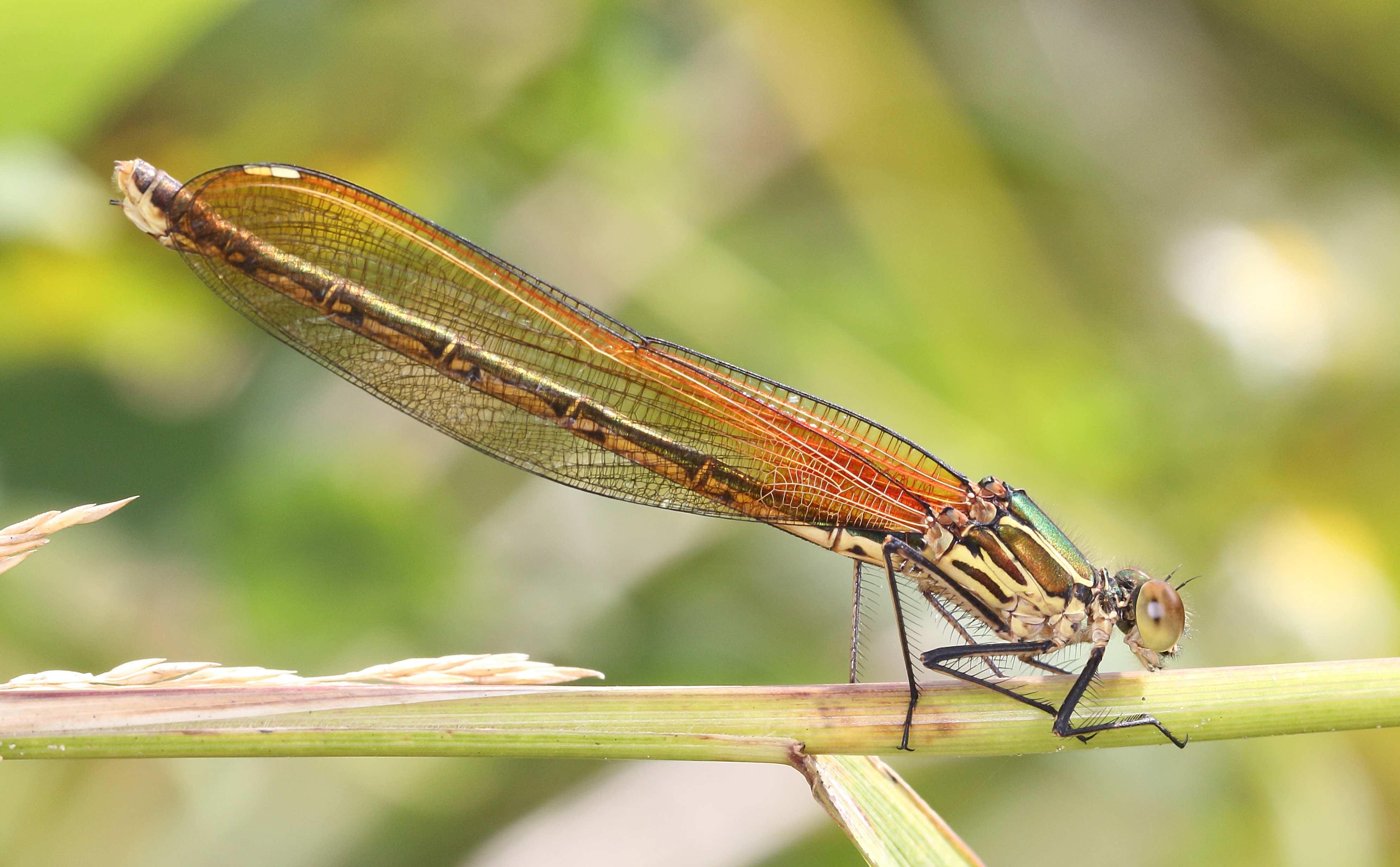 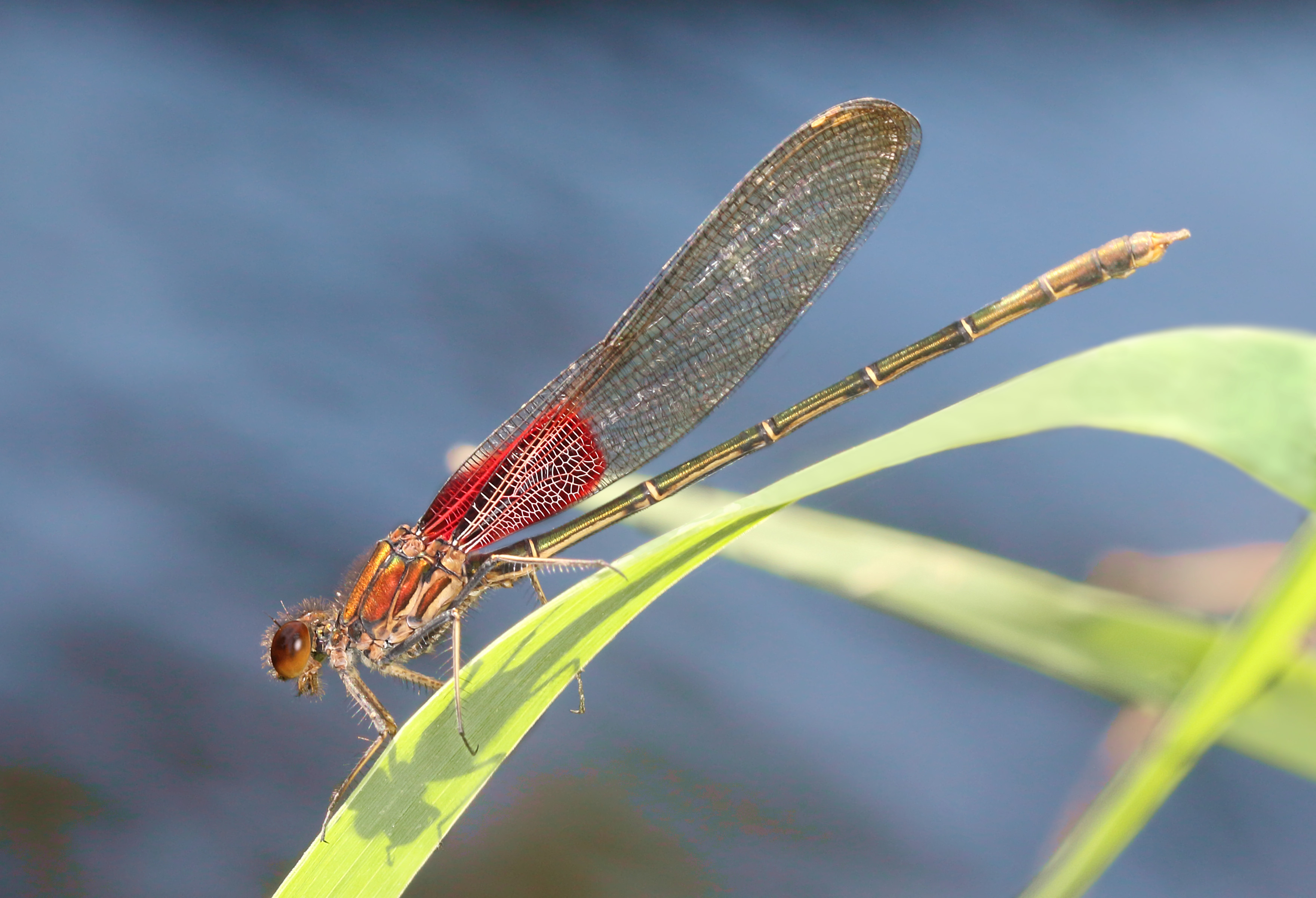 The next two are focus stacked pictures of some of our hopping Hemipterans, taken in a staged setting on our dining room table. Some years ago, there was a Big Revision in insect taxonomy where an entire insect Order (the Homoptera) was embedded inside another order, the Hemiptera. This still bugs me (“uniformly-winged Homoptera are really half-winged Hemiptera??), but the revision is probably correct. Anyway, the first is the partridge bug (Scolops sulcipes), although my private name for them is snout bug for obvious reasons, and the second is a thorn-mimicking wide-footed treehopper, Enchenopa latipes. For this staged picture,  a simple paint swatch was used to provide a somewhat naturalistic background. 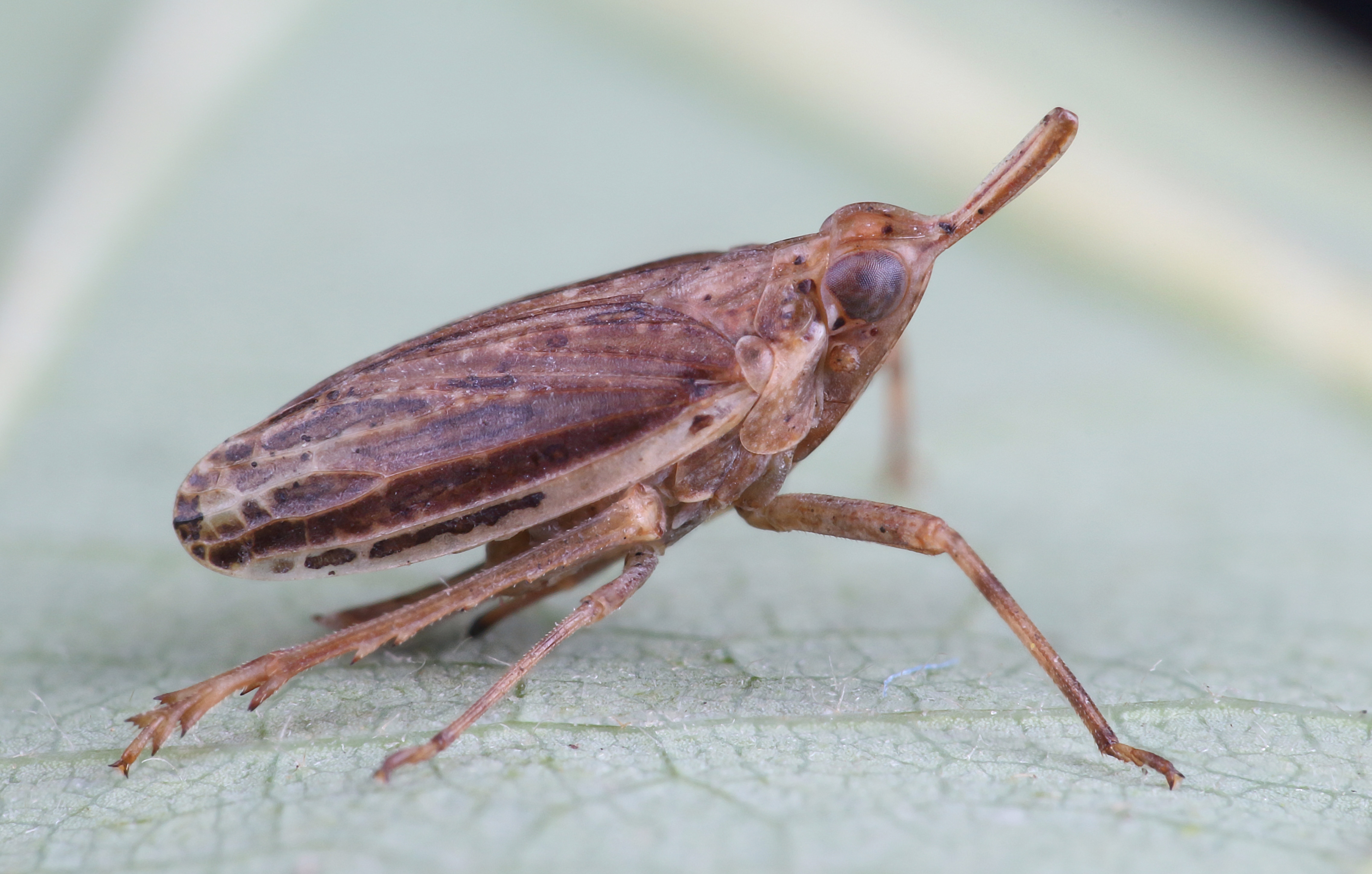 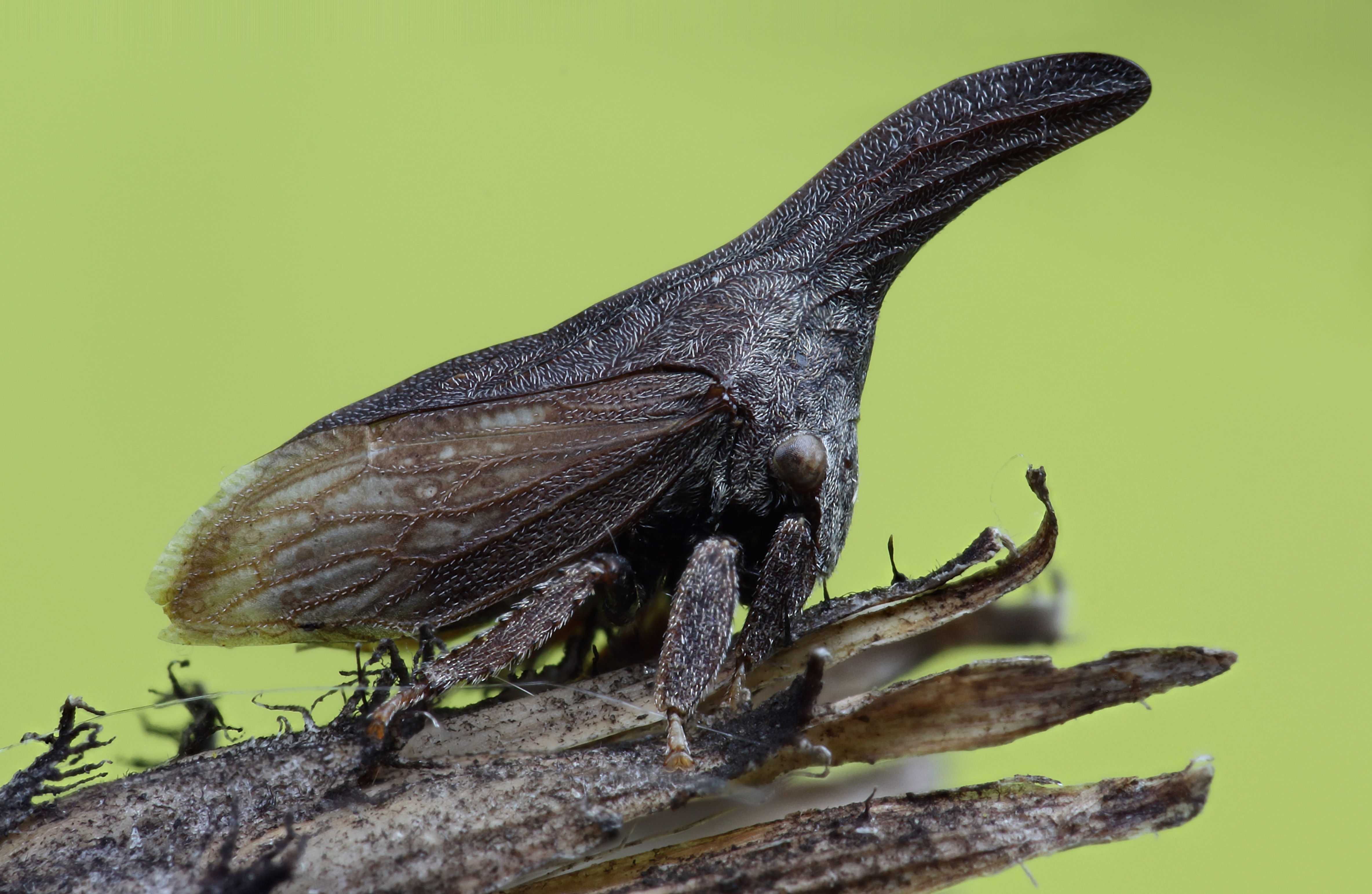 Next is a rather atypical jumping spider called the pike slender jumper, Marpissa pikei. These prefer to sit stretched out along grass blades, but here I had moved her onto a leaf to get a clearer shot. 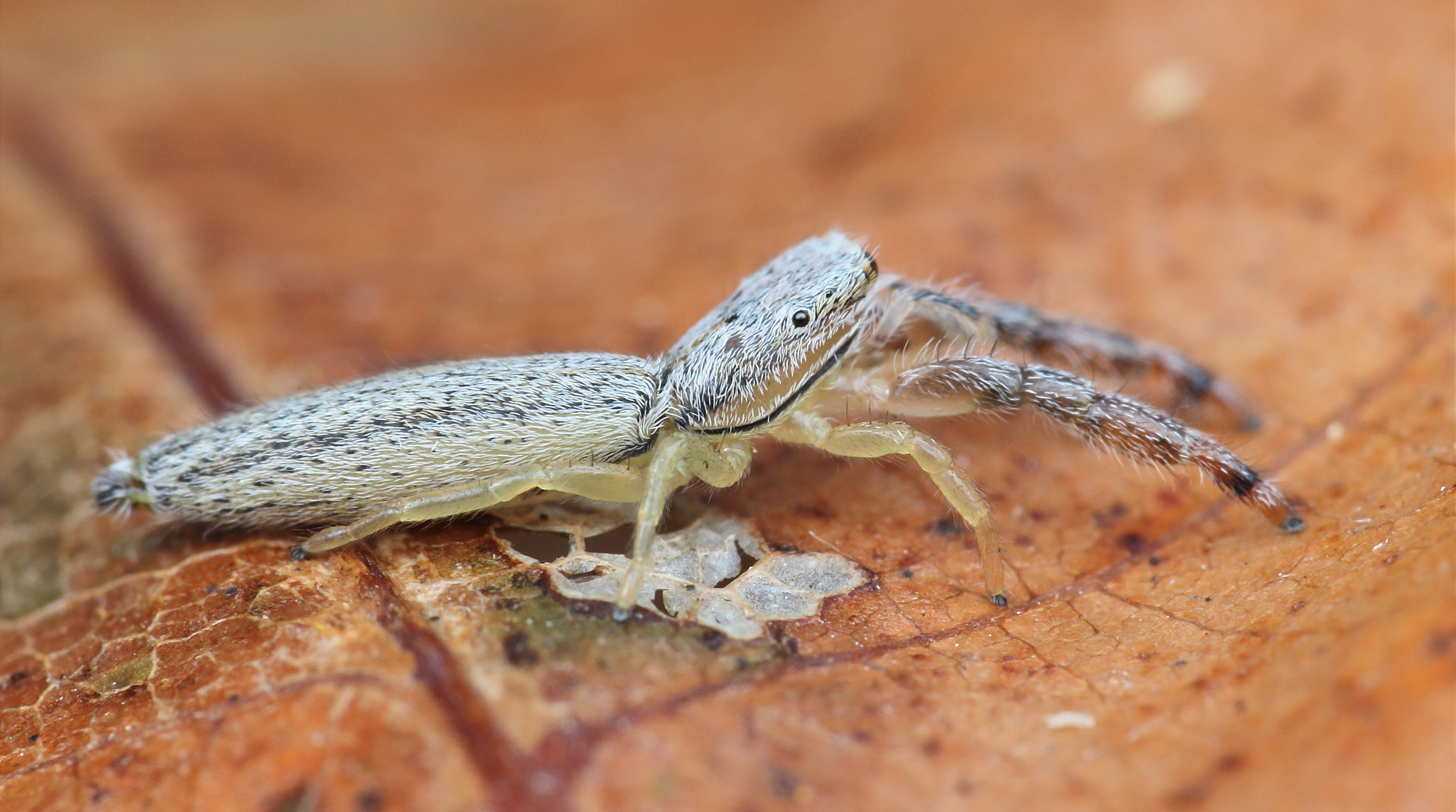 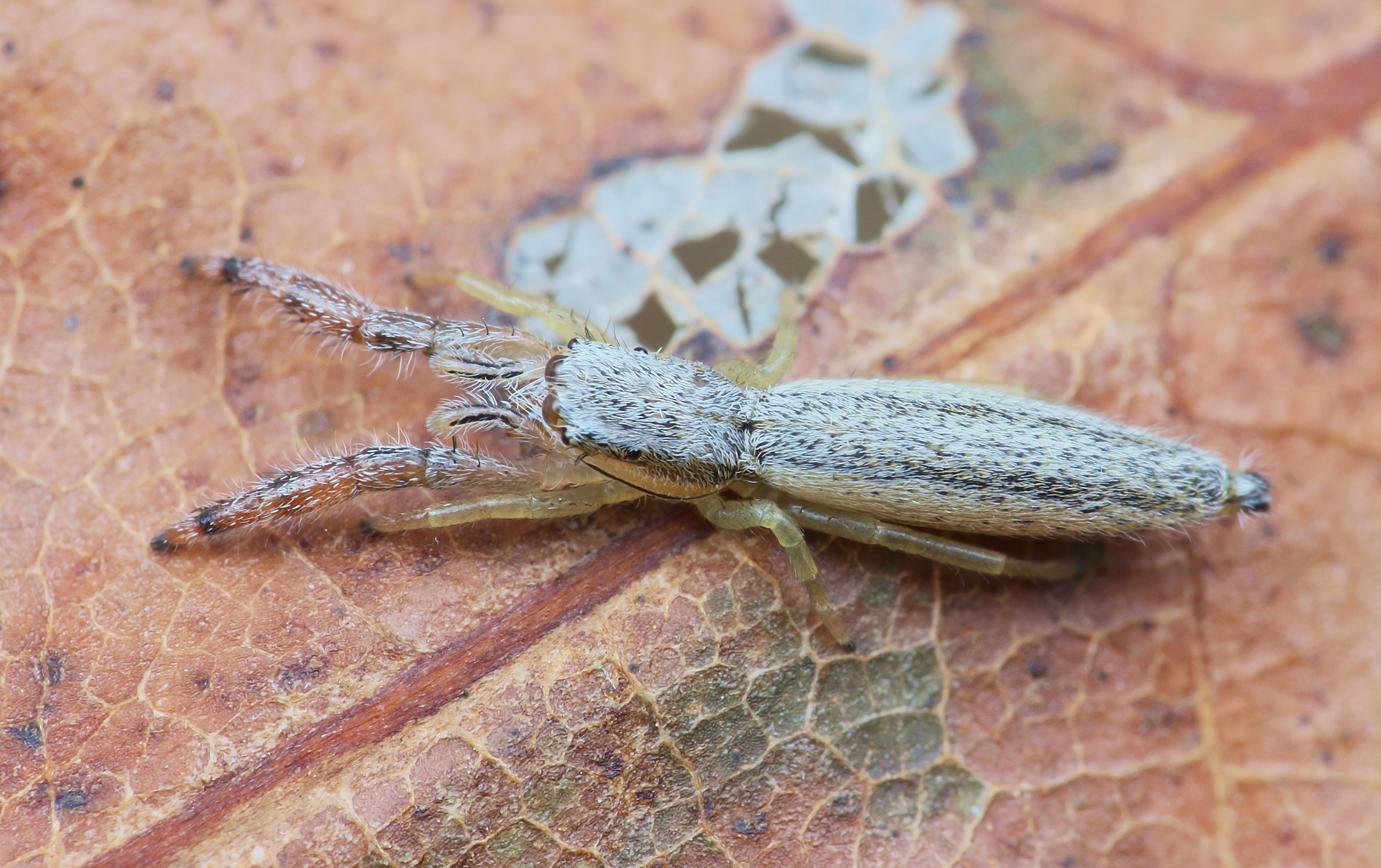 I close this set with one of my favorite pictures of the season. Nothing unusual, really, just a viceroy butterfly (Limenitis archippus) calmly foraging on wild aster flowers. But the composition was most felicitous. 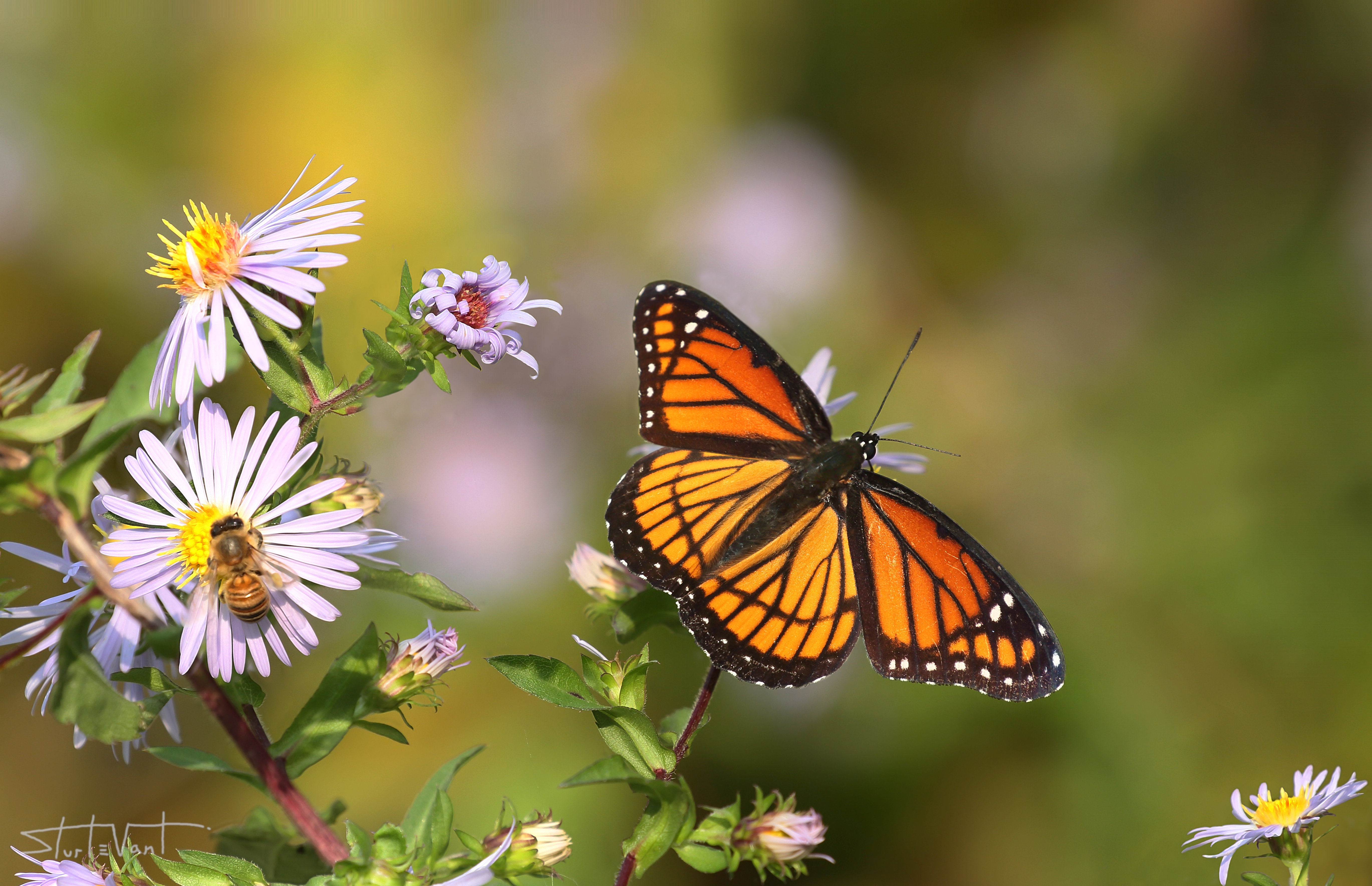 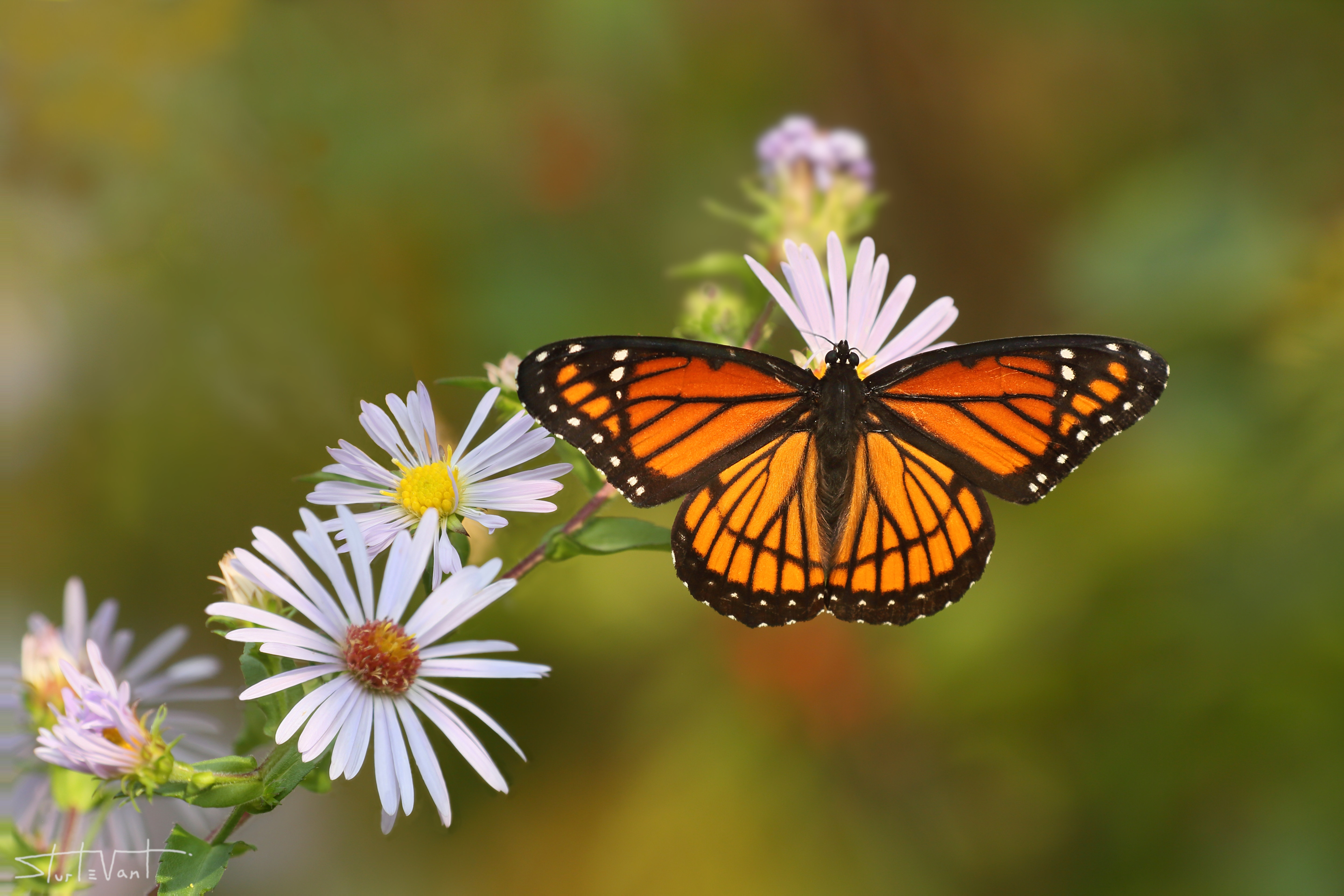