I’m sure there have been atheists in Congress before, but I can think of only one who was open about it: Pete Stark, a Democratic representative from Congress who served from 1973-2013—a long forty years. But he announced his atheism only in 2007, six years before he retired. Barney Frank (remember him?) a Massachusetts Congressman from 1981-2013, was also an atheist, but he admitted it only after he left office. (Frank was also gay, but was open about that when he was in office, which shows you where atheists stand!)

Frank was, like me, an atheistic Jew—something that Dave Silverman asserts is an oxymoron. Here’s what he said to the Religion News Service in 2014:

CS: You became the first openly gay member of Congress in 1987, but you didn’t reveal your nontheism until after you left office. Why?

BF: It was never relevant. I never professed any theology. And it’s complicated by my Jewishness. Obviously, being Jewish is both an ethnicity and a religion. I was concerned that if I were to explicitly disavow any religiosity, it could get distorted into an effort to distance myself from being Jewish—and I thought that was wrong, given that there is anti-Jewish prejudice.

For years I would go to temple, but I suddenly realized it doesn’t mean anything to me. So I decided, I’m not going to do this. I’m not going to pretend. During my service I never pretended to be a theist. It just never became relevant that I wasn’t, and I guess I was not as conscious of the discrimination nontheists felt. But I’ve always been opposed to any imposition of religion. I fought hard, for example, with other members of Congress to oppose any notion that a religious group getting federal funds could discriminate in hiring.

When I took the oath of office, I never swore and said, “So help me God.” But members of the House take the oath en masse, so nobody noticed. I’ve said that if I’d been appointed to the Senate, as I wanted my governor to do but he decided he had other plans, I would’ve had my husband hold the Constitution.

The subject just never came up. The only religious services I’ve attended for the last 20 years were funerals; I’ve attended more masses than a lot of my Catholic friends.

I think we all know that there are lots of “hidden” atheists in the government, but they won’t admit it (Trump is surely one).

Why put your nonbelief out of view? You know why. Americans demonize atheists, and I suspect that even many of the ‘nones’, who have no declared affiliation with a church, don’t like us, either. As an article in The Conversation noted:

This puts the country at odds with democracies the world over that have elected openly godless – or at least openly skeptical – leaders who went on to become revered national figures, such as Jawaharlal Nehru in India, Sweden’s Olof Palme, Jose Mujica in Uruguay and Israel’s Golda Meir. New Zealand’s Jacinda Ardern, the global leader who has arguably navigated the coronavirus crisis with the most credit, says she is agnostic.

But in the United States, self-identified nonbelievers are at a distinct disadvantage. A 2019 poll asking Americans who they were willing to vote for in a hypothetical presidential election found that 96% would vote for a candidate who is Black, 94% for a woman, 95% for a Hispanic candidate, 93% for a Jew, 76% for a gay or lesbian candidate and 66% for a Muslim – but atheists fall below all of these, down at 60%. That is a sizable chunk who would not vote for a candidate simply on the basis of their nonreligion.

. . . In fact, a 2014 survey found Americans would be more willing to vote for a presidential candidate who had never held office before, or who had extramarital affairs, than for an atheist.

We’re not trusted, and the article discusses why. One reason is the common misconception that if you don’t believe in God, you can’t be moral.

Here’s a plot from the Conversation article showing that only SOCIALISTS are less likely to be elected than atheists. (But what about Bernie?). 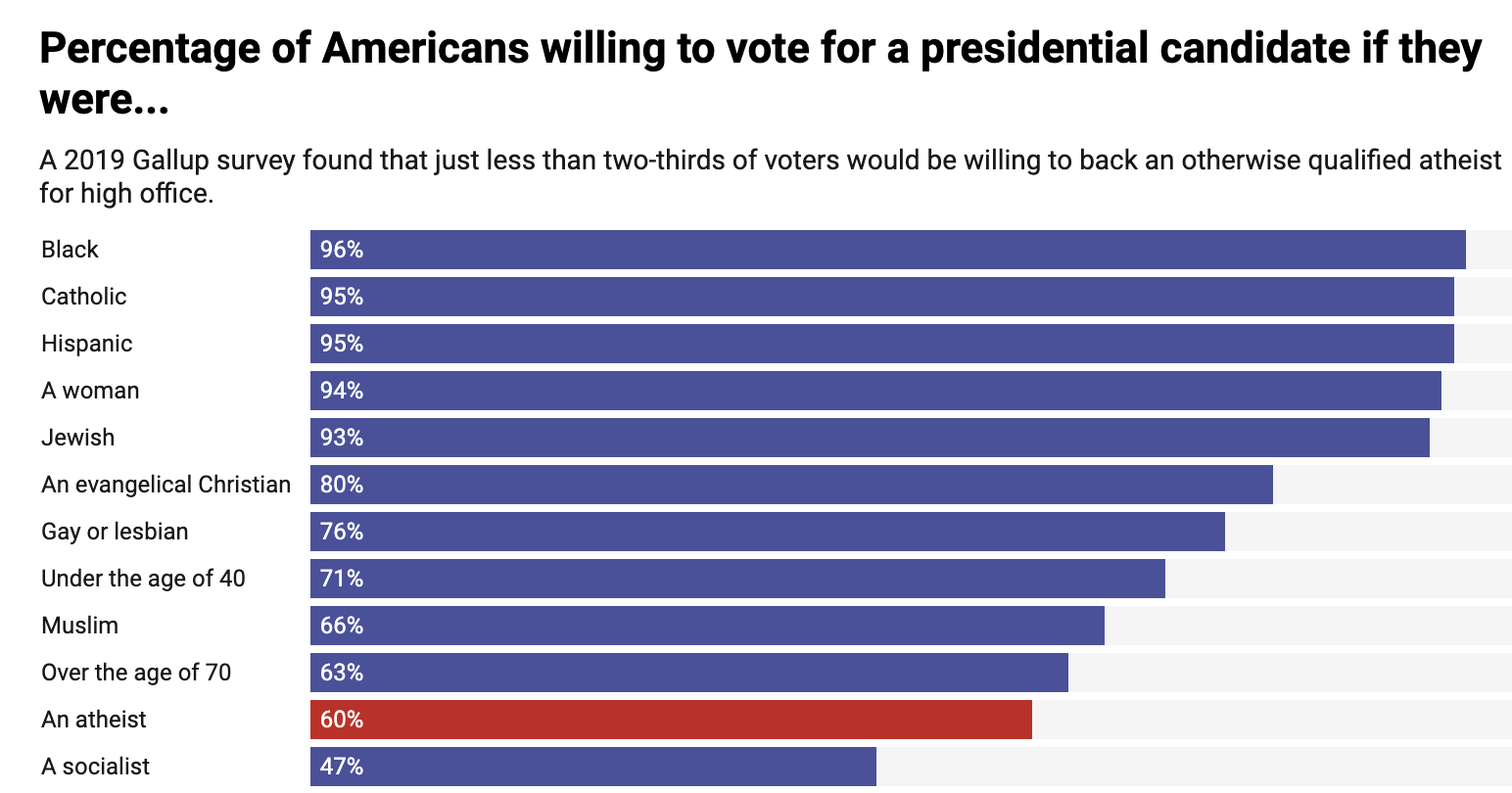 Now, though, Congressman Jared Huffman of California, a Democrat (of course only Democrats would admit such a thing) has also come out as an atheist. Again, he admits it now although he’s been sitting Congress since 2013, so nobody has actually runs initially for Congressional office stating that they’re nonbelievers.

Huffman announced his apostasy at the FFRF convention; click on the announcement below to read:

Rep. Jared Huffman, D-Calif., made his views on the nonexistence of God extremely clear at the Freedom from Religion Foundation’s recently concluded annual convention in San Antonio.

In his taped remarks welcoming convention-goers, he stated, “I feel like I have sort of become the surrogate representative for countless folks across the United States that identify as nonreligious. As many of you know, I am the token humanist in Congress. A few others are coy about how they describe their religious views but I’ve come right out and said it: I’m a humanist and I don’t believe in God.”

Well, he didn’t say the “a-word” but he is one. It’s weird how you can say you don’t believe in God and yet not call yourself explicitly an “atheist”. The article continues.

Huffman has been a stalwart defender of secularism in Congress, as a founding member and co-chair of the Congressional Freethought Caucus. Its mission statement is “to promote public policy formed on the basis of reason, science, and moral values; to protect the secular character of our government by adhering to the strict constitutional principle of the separation of church and state; to oppose discrimination against atheists, agnostics, humanists, seekers, religious and nonreligious persons, and to champion the value of freedom of thought and conscience worldwide; and to provide a forum for members of Congress to discuss their moral frameworks, ethical values, and personal religious journeys.”

The caucus currently has 17 members, more than quadruple its size since its establishment four years ago.

This revelation isn’t entirely surprising considering past statements and advocacy. A 2017 article proclaimed Huffman wasn’t “sure” if there was a God. He said he used to ignore questions about his faith but has changed course in recent years.

“I don’t believe in religious tests, and I don’t believe my religion is all that important to the people I represent, and I think there’s too much religion in politics,” he told the Post at the time. “For those reasons, I felt good about not even answering it.”

Huffman became more vocal, though, crediting former President Donald Trump and others who were relying on Christianity in policy-making; thus, he, too, started speaking up. Rather than embrace the “atheist” label, though, he called himself — much like in the most recent video — a “humanist.”

“I’m not hostile to religion, and I’m not judging other people’s religious views,” Huffman said in his Post interview. “I suppose you could say I don’t believe in God. The only reason I hesitate is — unlike some humanists, I’m not completely closing the door to spiritual possibilities. We all know people who have had experiences they believe are divine … and I’m open to something like that happening.”

So here are the lessons. If you want to be a politician who actually gets elected:

But there is something good in this, too, of course. A guy can openly declare he’s an atheist now and even get re-elected (like Pete Stark) after you’ve admitted it. But first you have to have been in government for a long time and kept your mouth shut.

Second, there’s a Congressional Freethought Caucus, and I didn’t know about that.  It’s small, though: the FFRF says this:

Not a lot of people, but Democrats all!