Good morning at the end of the work week: November is marching on, and it’s now November 11, 2022: National Sundae Day, even though it’s Friday. The world’s best hot fudge sundaes are to be found at the classic Margie’s Candies in Chicago. Here’s an example. No way those two women are gonna eat 15 scoops of ice cream! (If you ever get to Chicago, be sure to put Margie’s on your itinerary).

It’s Veteran’s Day, of course (Nov. 11, 1918 marked the end of hostilities in WWI), and it’s associate with these observances, including Armistice Day (New Zealand, France, Belgium and Serbia), National Independence Day (Poland), commemorates the anniversary of Poland’s assumption of independent statehood in 1918,  Remembrance Day (United Kingdom and the Commonwealth of Nations, including Australia and Canada) and Veterans Day, called Armistice Day until 1954, when it was rededicated to honor American military (Army, Navy, Marine, and Air Force) veterans. (United States)

There’s a new Google Doodle that links to the holiday: click below to see:

It’s also Origami Day and Pocky Day, the latter celebrating the Japanese thin biscuit covered with icing. I’ve never had one, but here’s the chocolate version:

Readers are welcome to mark notable events, births, or deaths on this day by consulting the November 11 Wikipedia page.

*We’re all waiting for the election results, which clearly will take some time, but at least Dr. Oz isn’t going to be Senator Oz. Here’s the WaPo’s count, which yesterday evening gave the GOP one more Senatorial seat (it’s back to 48 now).

The states in contention are Arizona, Nevada, and Georgia, and in Georgia we won’t know the results until December after the runoff election.  However, the Dems can win Arizona and Nevada shortly, which gives them control of the Senate. I’ve written off the House to the GOP:

But this year, Democrats have an alternate path to securing control of the Senate — one that runs through Arizona and Nevada. Victories in both of those state’s Senate races would give them control even before the Georgia runoff.

That would lower the stakes of the runoff between Mr. Warnock and Mr. Walker, who earned significantly fewer votes than Gov. Brian Kemp, the Republican incumbent who won re-election on Tuesday. But it’s not clear if that possibility would benefit Democrats or Republicans.

Neither side is taking any chances: Senator Chuck Schumer, the majority leader, has already begun raising money for Mr. Warnock and Senate Republicans are doing the same for Mr. Walker.

What a lousy job it must be to ask people to donate to the cringeworthy Herschel Walker! The GOP should be embarrassed to have him representing them. Some other tips from the NYT:

AOC should shut her yap; she’s not helping the Democrats. Why didn’t she add that “we need to be clearer that we want fully open borders, too”?

My prediction? I’ve already said the House will go to the GOP, but I’m predicting that the Democrats will get at least two more wins, which gives them the Senate, and may get all three. Cross your fingers!

*Alex “There Was No Shooting” Jones was just fined another $473 million in punitive damages for his Sandy Hook defamation claims, making his total fines over $1.4 billion. I don’t think even he has that kind of dosh. The same judge who presided over his civil trial assessed the new fine:

Superior Court Judge Barbara Bellis imposed the penalty Thursday on top of a nearly $1 billion jury verdict last month, which capped a weekslong trial to determine how much Mr. Jones should pay for claiming the 2012 massacre, where a gunman killed 20 children and 6 adults, was a government conspiracy.

Eight families of those who died and a Federal Bureau of Investigation agent sued Mr. Jones for defamation over the years of false statements he made about the shooting on his Infowars platform. After the verdict, Judge Bellis had the discretion to award attorneys fees plus other penalties for Mr. Jones’s conduct. She awarded $322 million in attorneys fees and individual punitive damage awards to each plaintiff.

Mr. Jones’s attorneys argued that the verdict was punishment enough, and that awarding more would serve as a hardship for the far-right commentator and the parent company of his Infowars platform, Free Speech Systems LLC, which has filed bankruptcy.

He’s bankrupt, perhaps, but I doubt his voice (which sounds to me like glass scraped on a blackboard), will be silenced. Somebody will hire the porcine conspiracy theorist: there’s always a market for that kind of junk!

*Reader Jez found this bizarre bit of news on the BBC, and the headline is so cringeworthy (and yes, funny in a twisted way), that I had to put it up (click to read). And it’s from Germany!

Now you should know what Kristallnacht is, but if you don’t look it up here. And then the Big Gaffe:

KFC has apologised after sending a promotional message to customers in Germany, urging them to commemorate Kristallnacht with cheesy chicken.

The Nazi-led series of attacks in the country in 1938 left more than 90 people dead, and destroyed Jewish-owned businesses and places of worship.

It is widely seen as the beginning of the Holocaust.

The message, heavily criticised for its insensitivity, was later blamed on “an error in our system”.

The fast food chain sent an app alert on Wednesday, saying: “It’s memorial day for Kristallnacht! Treat yourself with more tender cheese on your crispy chicken. Now at KFCheese!”

Around an hour later another message was sent with an apology, according to the Bild newspaper.

“We are very sorry, we will check our internal processes immediately so that this does not happen again. Please excuse this error,” the message is reported to have said.

Germany takes the 9 November anniversary of Kristallnacht (the night of broken glass) seriously, with numerous memorial events and discussions scheduled to reflect the Nazis’ murder of more than six million Jewish people.

A deadly outbreak of listeria in six states has been linked to contaminateddeli meat and cheese, the US Centers for Disease Control and Prevention announced Wednesday.

People at high risk of severe illness from listeria infection — such as pregnant people, the elderly and those with weakened immune systems — should not eat meat or cheese from any deli counter without first reheating it “steaming hot,” the agency suggests.

A total of 16 people have been infected, and 13 have been hospitalized, according to reports from six states. One death was reported in Maryland; another person became ill while pregnant and lost their baby, the CDC said in a statement.

The woman who sent me this has stopped listening to CNN (and unsubscribed from NPR) because of stuff like this. People are getting fed up with the policing of language.

*In the latest issue of Science, Matthew’s most recent book,  As Gods: A Moral History of the Genetic Age (it has a different title in the UK), gets a stellar review. In fact, I can’t think of a review that could be more positive, as it doesn’t really find anything to quibble about. I’ll pull a quote, but you should buy the book, which is about the history of genetic engineering, heavily larded with Matthew’s own sensible takes on issues like GMOs and CRISPR gene-editing in humans. I can’t even copy the plaudits from Science’s PDF, so here’s a screenshot; I hope you can read it.

And buy the book if the topic interests you; it’s very good (and I helped with the editing!): 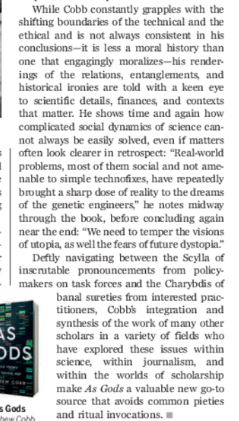 Meanwhile in Dobrzyn, Hili and Baby Kulka are out “birdwatching” again:

Kulka: Look what cute feathers this sparrow has.
Hili: I can see them, actually.
(Photo: Paulina) 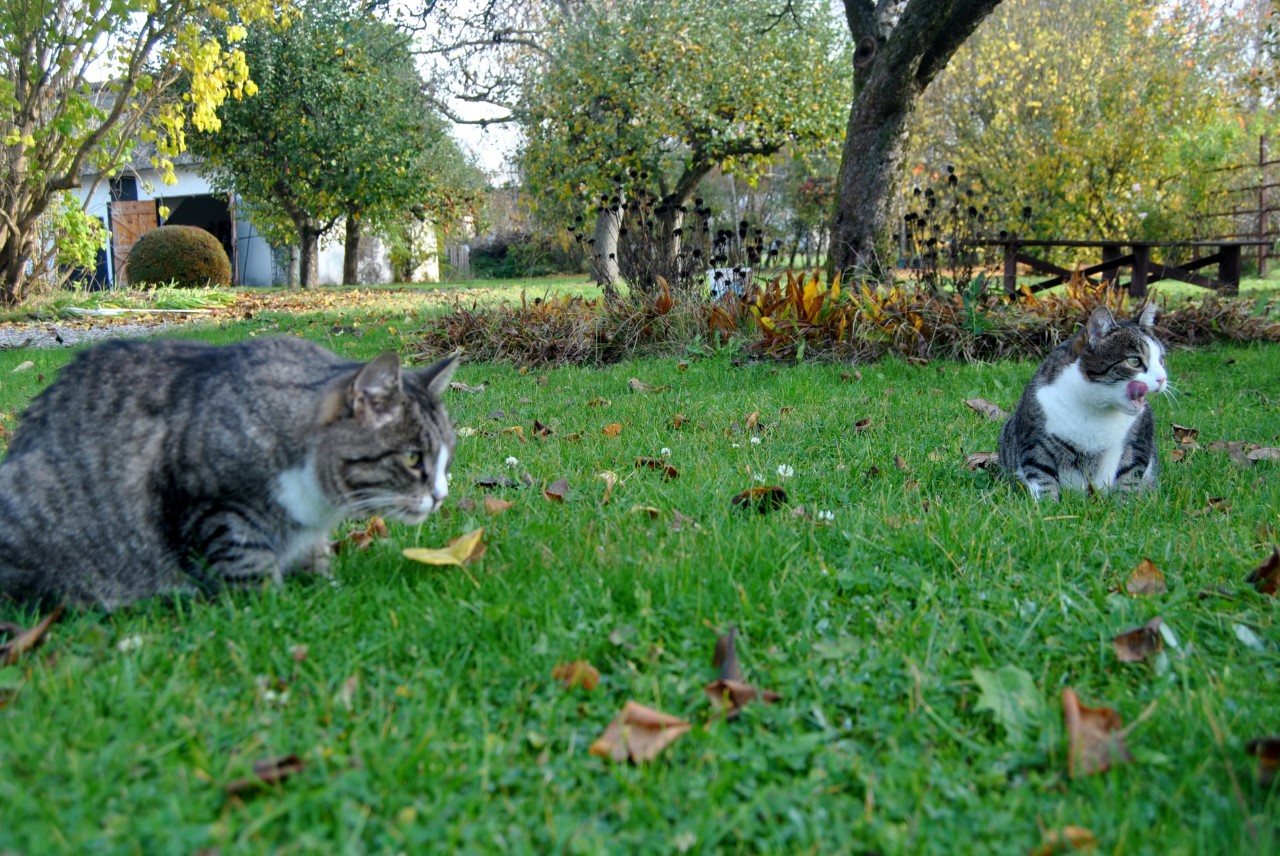 From Stash Krod (this was me on the line to Amazon the other day).  Calling centers in India are now where you’ll find your representative: I even got one when I called Medicare the other day! 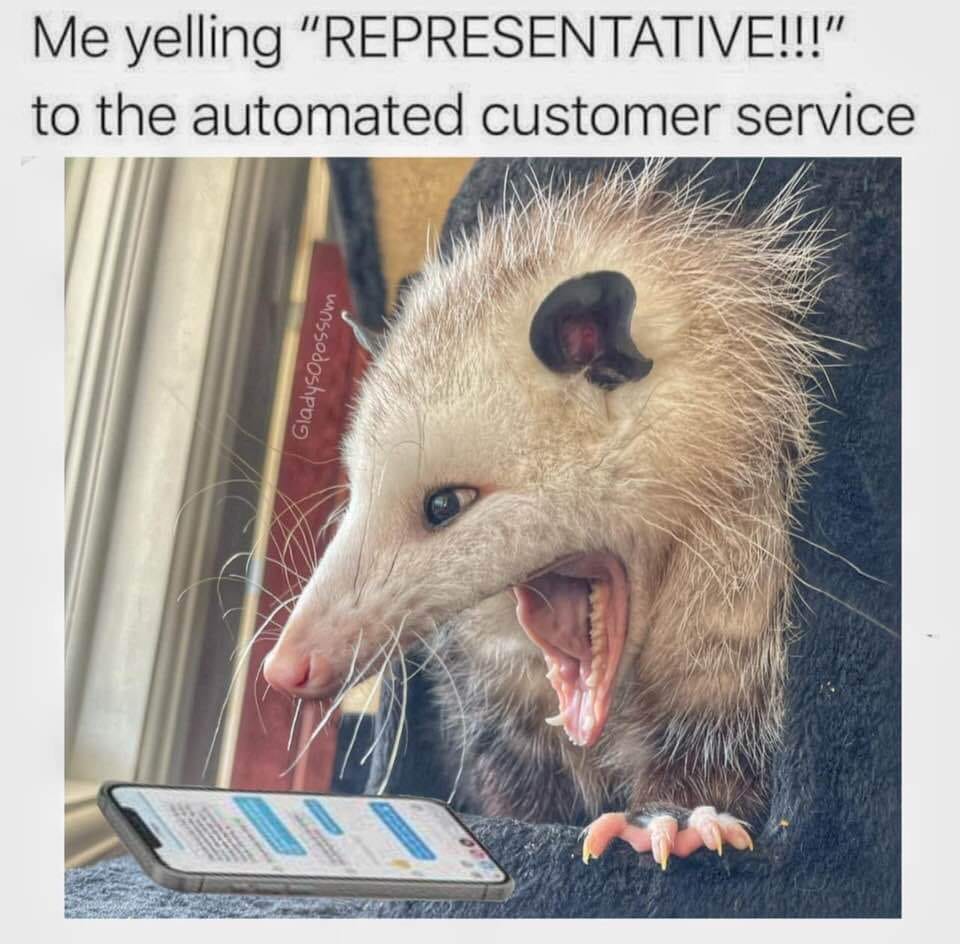 From Kākāpō Recovery. There was a good crop of chicks this year, and the birds are all known and taken care of. Note the butthole check! 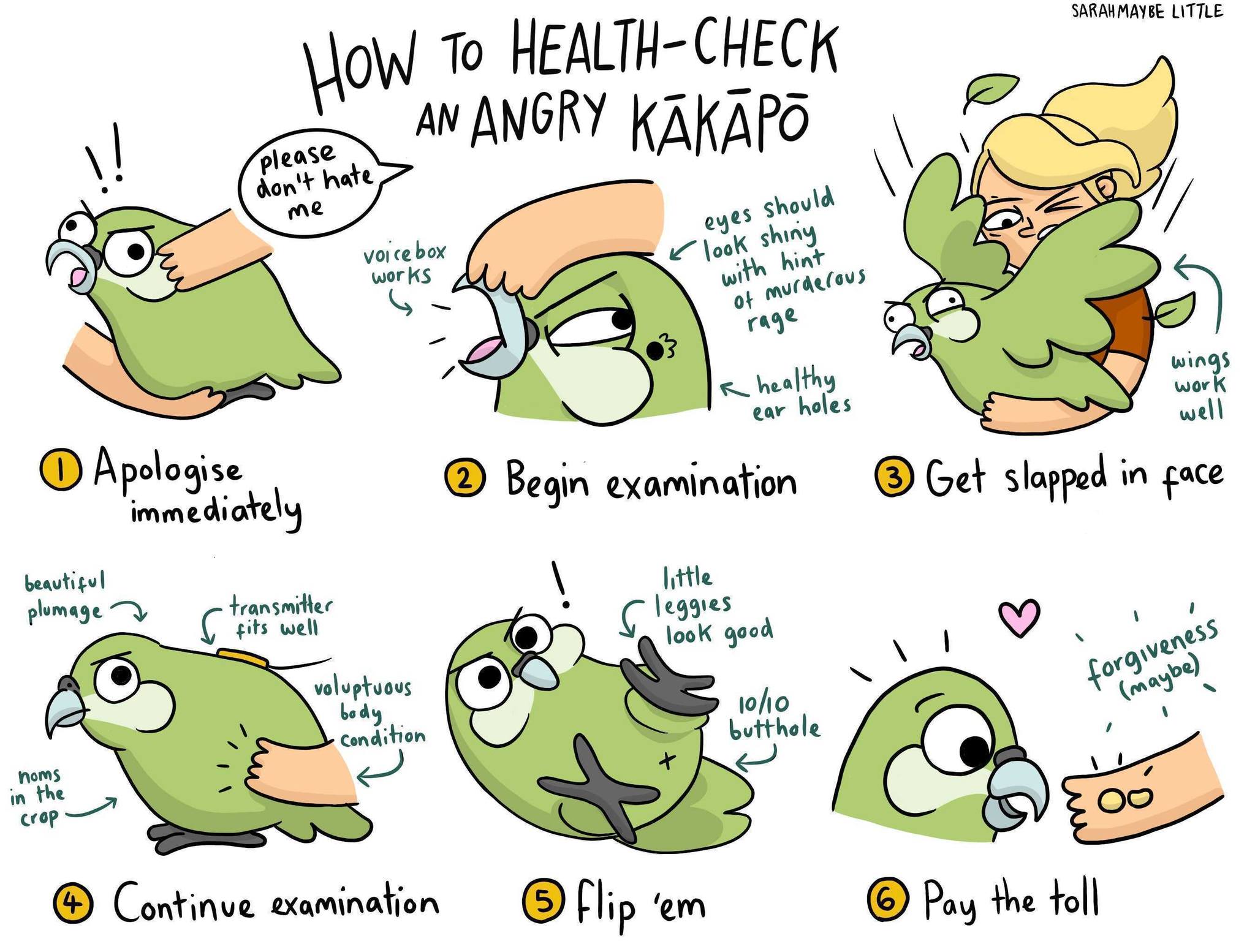 BTW, don’t forget this video, “Shagged by a rare parrot.” It’s a classic, as Sirocco tries to mate with Mark Carwardine:

I think this was a real exchange, but am not sure: 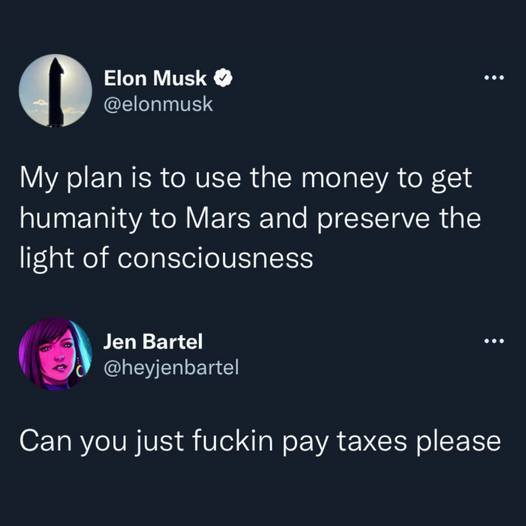 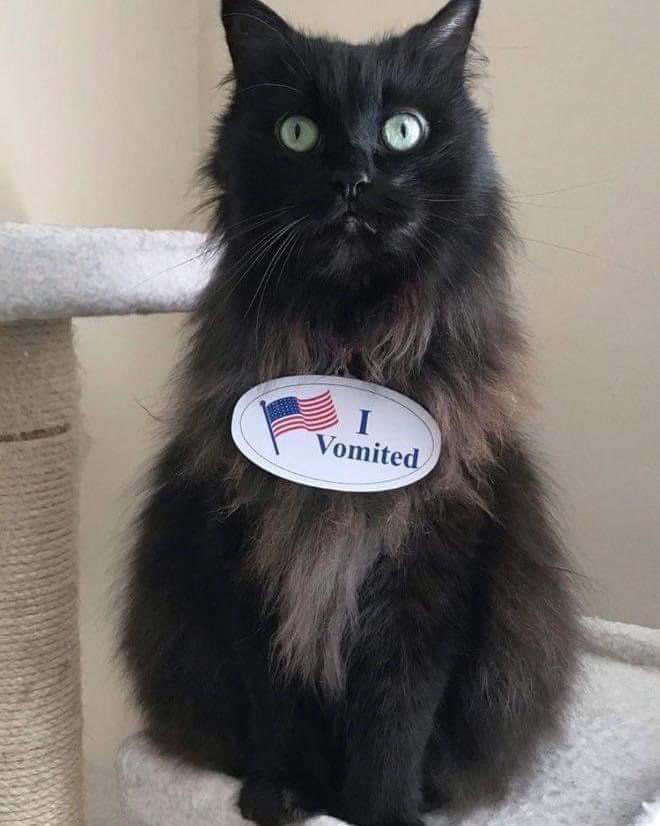 First, the tweet of the month from Seth Andrews, riffing on a tweet from the neuronally deprived Marjorie Taylor Greene. (h/t: Peter N.). I’m here to tell MTG that yes, the ducks ARE her enemies!

I can now finally get a blue check and establish Myself as the one true God of Twitter and the universe if I give Elon Musk $96 a year.

From Andrew Doyle, creator of Titania McGrath. Somehow I think this is gonna go over even worse than Rachel Dolezal:

An able-bodied man who identifies as a disabled woman has been interviewed sympathetically on Norwegian TV.

Reminds me of this Twitter argument from a couple of years ago… pic.twitter.com/PdggwoIv7b

From Masih. The chickens are getting closer to the roost. Note that many of these women aren’t wearing the mandatory hijab:

Can you believe this? The city of Qom, Iran’s most conservative city and the ideological capital of the regime, has seen large-scale anti regime protests? In this video protesters chant « clerics must get lost ». This regime won’t last#MahsaAmini

From Stephanie: A medieval artist finally drew something accurately: an insect. She adds this:

It compares a photograph of a nymph (Eurydema ornata) with a painted depiction of the same creature from the ‘Cocharelli Codex’, a fragmentary Northern Italian manuscript likely decorated c.1330–c.1340. The accuracy is impressive—clearly the artist studied the animal closely.
You can read more about the manuscript, and see further images (scroll down to the shaded box and click on the thumbnail image) here

From Simon, a meme showing The Rock (shirt photoshopped). “Ruth”, of course, is RBG, and the necklace is the collar she wore when delivering a dissenting opinion.

This is too perfect. pic.twitter.com/IoZZ2mzCjR

On 20 July 1942 she was deported from Angers to #Auschwitz in a transport of 827 Jews. She did not survive. pic.twitter.com/Op4biy1x0c

Tweets from Matthew. Sound up on this affectionate raven video, which is a sweet rescue story:

This raven acts just like a puppy with his dad 💙 pic.twitter.com/fjkJdYcQ06

SHELL FIGHT! Two octopuses have it out:

“For the first time, octopuses have been spotted throwing things — at each other.” By @Emma_Marris | @Nature https://t.co/Wm4hxjSfLL pic.twitter.com/mj7EVc49KB

Matthew says, “Save your money.”: