Here we have Richard Dawkins on an 11½-minute NZ television segment (the “AM”, show, I think), discussing Mātauranga Māori (MM), or the indigenous Māori “way of knowing.”  The two guests who comment on Richard’s interview are Ella Henry, Associate Professor of Int’l Business, Strategy & Entrepreneurship at Auckland University of Technology, as well as an advocate for Māori interests, and Bruce Weir (born in New Zealand), who is a professor of biostatistics at the University of Washington.

Richard espouses the reasonable view that if there are “scientific” or empirical truths in MM, they can be taught worldwide, as they are part of science, a universal endeavor. He adds that there is a place for teaching MM in New Zealand, but as part of sociology or anthropology.

The interviewer deems these comments as “likely to be controversial”, for they will be in New Zealand, but they’re sensible. The reason they’re controversial is because many—both Māori and non-Māori—want MM taught wholly as science, a ludicrous but growing idea that will diminish science education in New Zealand.

The comments by Henry and Weir begin at 6:07. Here she and the interviewer misinterpret Dawkins, who’s just said that the empirically true part of MM can be taught as science: he’s not dismissing everything in Māori “ways of knowing” as mythology. Nevertheless, Henry dismisses Dawkins’s views as part of “the Western Eurocentric scientific juggernaut” that doesn’t want to hear about Māori empirical knowledge. She goes on to bring up Polynesian navigational abilities.

Weir, too, is asked about Dawkins’s desire to “keep Māori science secret”, which again is not Richard’s claim. But he is a booster of the Māori and of teaching MM, yet he seems to agree that insofar as Māori do produce accepted empirical science, it should be taught as science.

Henry chimes in again criticizing science that comes from the “northern hemisphere”, and implies that “indigenous science” (which doesn’t use “Western mathematical equations” [!]) is something distinct from modern science—that there is “more than one science.” She claims that it’s quite “elitist” to claim that there is only one science. Oy vey!

Richard says he’s going to NZ next year, and I wonder if he’ll face much pushback.

As one Kiwi wrote me who sent me this video: “The two people that respond just totally misunderstanding Dawkins’ points and this is the embarrassing crap that we have to swallow here in order to keep our jobs.” Well, I don’t think Weir really misunderstands Dawkins’s points, but he also misses the chance to clarify the issue: that scientific knowledge is knowledge no matter where it comes from, and should be taught widely.  But, as one should add, mythology is not knowledge.

I suppose, since advocates of MM always call attention to the Māori’s careful “stewardship of the land”, I should mention this claim doesn’t comport with long-term history. As The Encyclopedia of New Zealand points out, the Māori engaged in considerable deforestation of the islands before Europeans arrived— nearly as much deforestation as created by the colonists themselves (see the interactive map).

Around 1000 CE, before humans arrived in New Zealand, forest covered more than 80% of the land. The only areas without tall forests were the upper slopes of high mountains and the driest regions of the South Island (which did have small pockets of tōtara). When Māori arrived, about 1250–1300 CE, they burnt large tracts of forest, mainly on the coasts and eastern sides of the two main islands. By the time European settlement began, around 1840, some 6.7 million hectares of forest had been destroyed and replaced by short grassland, shrubland and fern land. Between 1840 and 2000, another 8 million hectares was cleared, mostly lowland or easily accessible conifer–broadleaf forest.

No side is free of guilt from having despoiled these wonderful islands.

Below is an interview with Henry again, who maintains that MM is “equally valid and important” as is Western science, and so are other indigenous knowledge systems.  She accuses the West of having appropriated all Maori “wisdom” in some gigantic act of cultural theft. This, too, is untrue. The woman knows nothing about science or about the history of science. Further, she seems to completely ignore the mythical elements of MM, as well as its dependence on ideology, theology, word of mouth, and uncheckable and unlikely legend (e.g., the claim that Polynesians discovered Antarctica.  There’s science in MM, but it has to be separated from non-science. 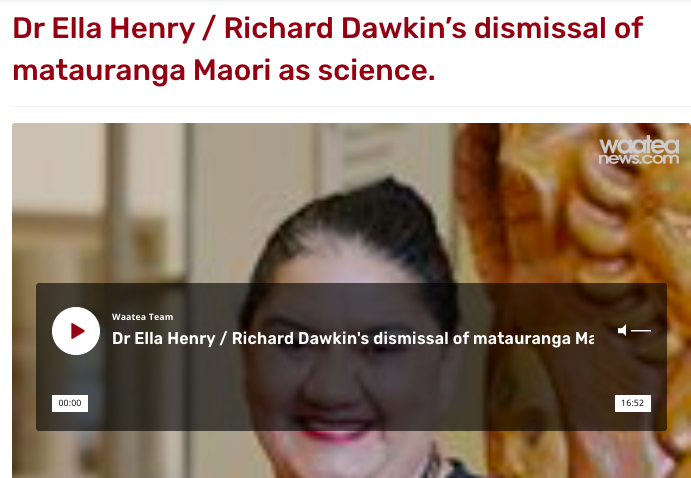 There’s also a long discussion of MM on reddit.

33 thoughts on “Richard Dawkins interviewed in NZ on Māori “ways of knowing”, is grossly misunderstood”