I saw this video by writer David Sedaris on Twitter the other day, a video in which he wants to be called “gay” rather than “queer”; instead, he announces, tongue in cheek, that he’s now “heterosexual,” as that word doesn’t change. As he said, “I just don’t see why I have to be re-branded for the fourth time in my life. I started as a ‘homosexual’, became ‘gay’, then ‘LGBT’ and now “queer.”

This is when I learned that “queer” is quickly replacing “gay” as a more “inclusive” term.  I don’t understand that, as I thought, mistakenly, that they were synonyms (but see Pamela Paul’s piece below), but who am I to object to what others want to be called?; I’m a “staight” or “cis” male (or, as some say with snark, a “breeder).  I’m happy with calling people what they want to be called, but Sedaris, as a member of a sexual minority, isn’t all that happy with being called “queer”.  Watch this very short video:

And today’s NYT column by Pamela Paul (click on screenshot to read) explains the change. And that’s when I realized that Sedaris was going to get flak for his words. 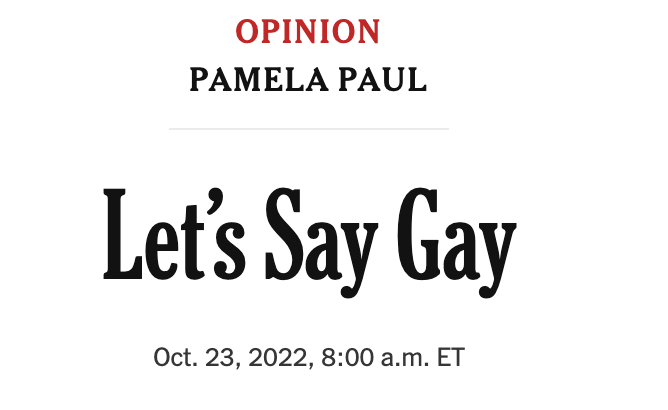 Last month, the new president of the advocacy group Human Rights Campaign, Kelley Robinson, posted a six-and-a-half-minute video to introduce herself and frame the mission of her organization, which was founded 40 years ago by the gay activist Steve Endean to help fund political campaigns for pro-gay-rights candidates. In the video, Robinson talked about voting rights. She talked about transgender kids in school. She talked about abortion access and workers’ rights. She said a lot of things, including getting “to a world where we are free and liberated without exception — without exception — without anyone left behind.”

Not once, however, did she say the word “gay” or “lesbian” or “bisexual.”

She’s not the only one. The word “gay” is increasingly being substituted by “queer” or, more broadly, “L.G.B.T.Q.,” which are about gender as much as — and perhaps more so than — sexual orientation. The word “queer” is climbing in frequency and can be used interchangeably with “gay,” which itself not so long ago replaced the dour and faintly judgy “homosexual.”

The shift has been especially dramatic in certain influential spheres: academia, cultural institutions and the media, from Teen Vogue to The Hollywood Reporter to this newspaper. Only 10 years ago, for example, “queer” appeared a mere 85 times in The New York Times. As of Friday, it’s been used 632 times in 2022, and the year is not over. In the same periods, use of “gay” has fallen from 2,228 to 1,531 — still more commonly used, but the direction of the evolution is impossible to miss. Meanwhile, the umbrella term “L.G.B.T.Q.” increased from two mentions to 714.

She mentions Sedaris’s video and then analyzes the kerfuffle in her characteristic straight-out style, which I like (she’s one of my favorite NYT columnists):

This raises a question for me, a language obsessive and someone interested in the ways word choices reflect and drive the culture: Why change the word for same-sex orientation? And to echo Sedaris: Who decides these things anyway?

Let’s start with the basic dictionary-sense differences between the words. “Gay” has a clear, specific meaning that applies to both men and women: “homosexual,” which is the first entry in most dictionaries. “Lesbian,” of course, bears the same meaning, but strictly for women.

Paul then digs into her dictionaries and notes that ““gay” and “queer” are not synonymous“, with “queer” having a multitude of meanings, including “odd” or, in this case, “a person whose sexual orientation or gender identity falls outside the heterosexual mainstream or the gender binary.” That, of course, covers a lot of territory, and also tells us why Sedaris doesn’t like being rebranded, because it makes his sexual orientation less specific—in fact, unidentifiable. And perhaps that’s the point of the change: to put everyone who’s not “cis” into one linguistic bag. Paul:

(You have to be really valiant to plow through Judith Butler!)

But Paul’s real argument (I think she’s “straight”, since she’s married to a man) is more serious: she sees “queer” as having, among its many meanings, some that aren’t so cool, while “gay” is unambiguous.

But this is important: Not all gay people see themselves as queer. Many lesbian and gay people define themselves in terms of sexual orientation, not gender. There are gay men, for example, who grew up desperately needing reassurance that they were just as much a boy as any hypermanly heterosexual. They had to push back hard against those who tried to tell them their sexual orientation called their masculinity into question.

“Queer” carries other connotations, not all of them welcome — or welcoming. Whereas homosexuality is a sexual orientation one cannot choose, queerness is something one can, according to James Kirchick, the author of “Secret City: The Hidden History of Gay Washington.” Queerness, he argues, is a fashion and a political statement that not all gay people subscribe to. “Queerness is also self-consciously and purposefully marginal,” he told me. “Whereas the arc of the gay rights movement, and the individual lives of most gay people, has been a struggle against marginality. We want to be welcomed. We want to have equal rights. We want a place in our institutions.”

Many gay people simply prefer the word “gay.” “Gay” has long been a generally positive term. The second definition for “gay” in most dictionaries is something along the lines of “happy,” “lighthearted” and “carefree.” Whereas “queer” has been, first and foremost, a pejorative. For a certain generation, “queer” is still what William F. Buckley, jaw clenching, called Gore Vidal on ABC in 1968 — “Listen, you queer” — before threatening to “sock you in your goddamn face.”

What I hear most often from gay and lesbian friends regarding the word “queer” is something along the lines of what Sedaris pointed out: “Nobody consulted me!” This wasn’t their choice.

Paul’s explanation is—you guessed it—academics (who gave us the odious term “Latinx”), along with the high percentage of Gen Z folks who identify as “LGBT”.  Paul hastens to reassure the reader that people can use any term they want to describe themselves, but some terms are less desirable than others. “Fat,” she argues, is a term that overweight people deeply dislike, along with “obese” and “chubby”. (They prefer terms like “overweight” or “unhealthy weight”.) Why not use the terms that offend people the least, at least in their presence?  And apparently, Sedaris prefers “gay” to “queer”.  As Paul notes,

Language is always changing — but it shouldn’t become inflexible, especially when new terminologies, in the name of inclusion, sometimes wind up making others feel excluded. In the case of “queer,” it’s especially worrisome and not only because it supersedes widely accepted and understood terms but also because the gay rights movement’s successes have historically hinged on efforts at inclusion.

Gay people, lesbians and bisexuals fought for a long time to be open and clear about who they are. That’s why they call it pride.

Well, I have no dog in this fight, either, and am happy to call people what they want to be called. I think that when someone tells you they’re gay, that’s the word you should use. Same with “queer”.  But will we now have to resort to asking people not only their pronouns, but how to describe their sexual orientation? (Actually, I think the person will nearly always tell you themselves without your asking.)

And, as I predicted to myself when I read Paul’s column, Sedaris is being roundly trounced by the Pecksniffs. Take a look at this article in Jezebel, for instance, which goes to great lengths to find flaws in Sedaris’s “argument”, comparing him to an old man yelling at a cloud. And there’s the Language Police at Advocate, saying that there’s simply so much to “unpack” in Sedaris’s claim, much of it offensive. And Queerty documents the social-media “firestorm” around Sedaris’s claim.

So be it. I saw Sedaris’s piece as a bit of humor, with a tiny grain of seriousness. After all, he’s certainly not a member of the class using the word he prefers: “heterosexual”!  But there’s no humor in the Woke Language Police. One could update the old cartoon, now showing a customer in a bookstore (who wants a funny book) being told by a clerk, “Sorry, sir, this is a Progressive bookstore. We have no humor section.”