It’s been a quiet rest in Cambridge, and I haven’t been overly ambitious because the persistent insomnia produces a near-constant fatigue. Nevertheless, I haven’t been quiescent, either. Here are a few photos from the last two days in Cambridge and the Boston area.

First, you may have forgotten Jack the Cat, staffed by the daughter of my hosts. Jack and staff live in Jamaica Plain, right outside Boston. In September of last year, Jack fell three stories from a porch and landed on a cement driveway, severely injuring himself. I wrote a several posts about it at the time (see link above), documenting Jack’s care at the famous animal hospital Angell Memorial Medical Center.  Jack was badly injured; as I wrote at the time:

He can move and even walk a bit to his litter box on his injured paw, but most of the time, senses dulled by painkillers, he lies on his blanket. His paw is all bandaged and pinned, and the three buttons around his mouth are to keep it stitched shut until his shattered mandible heals (he can open his mouth 1 cm to eat). He’s also wearing the Cone of Shame:

He had a fracture of the second and third metacarpal bones, a fourth and fifth left carpometacarpal joint luxation, as well as the mandibular fractures, a collapsed lung, and contusions on the lung (those have largely healed). He’ll be laid up for six weeks, minimum, but in the end he should be all right, although perhaps without the mobility he used to have.

It was touch and go for a while. Here’s Jack soon after the accident, paw all pinned together and with buttons holding his jaw shut so it could heal. He was one sad moggy! 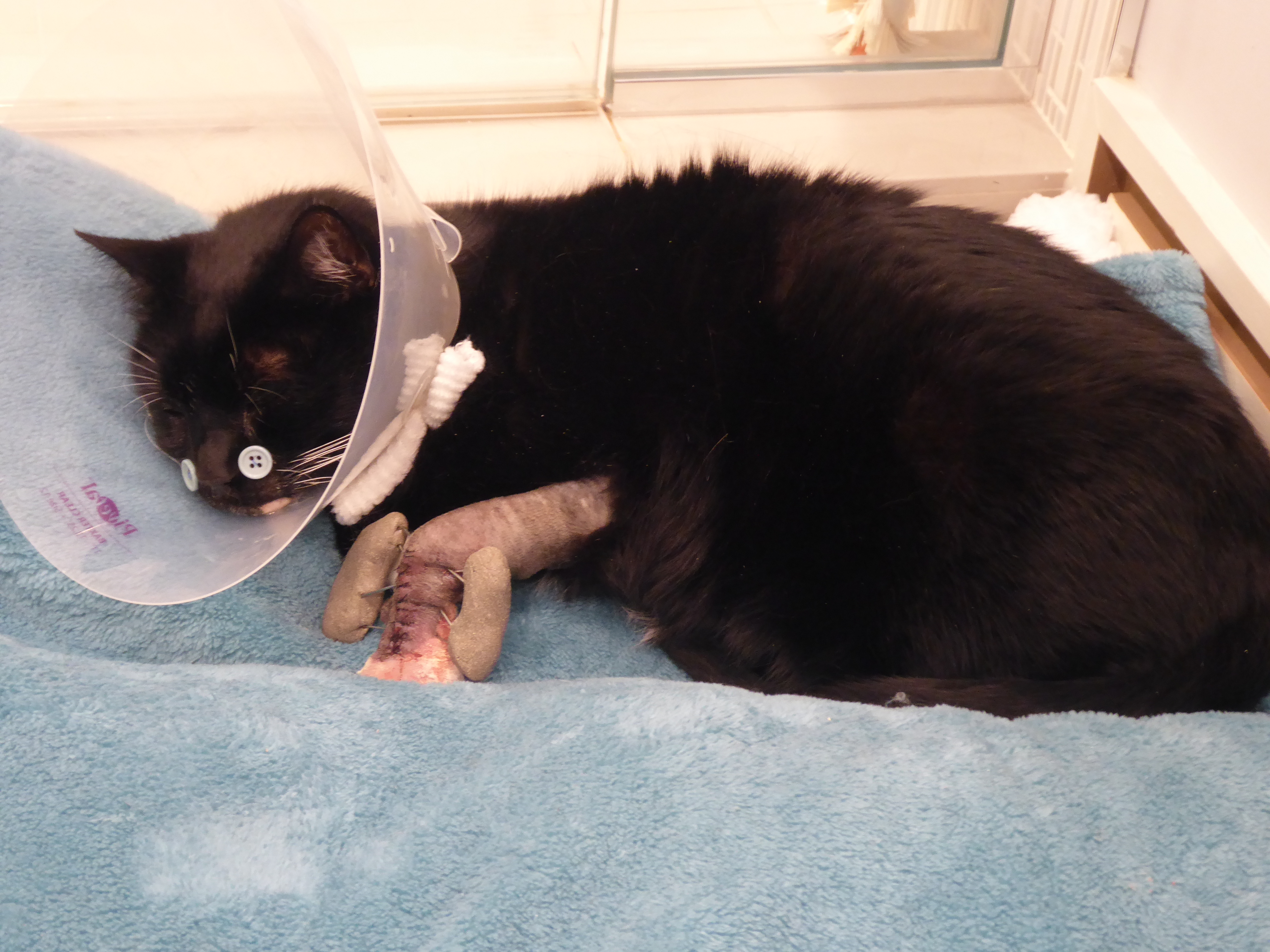 Yesterday we visited Jack and his staff and I was delighted to see that he’s completely healed, without even a trace of a limp. He was just a normal tuxedo cat, jumping about, chasing a laser pointer, and soliciting scritches on the chin: 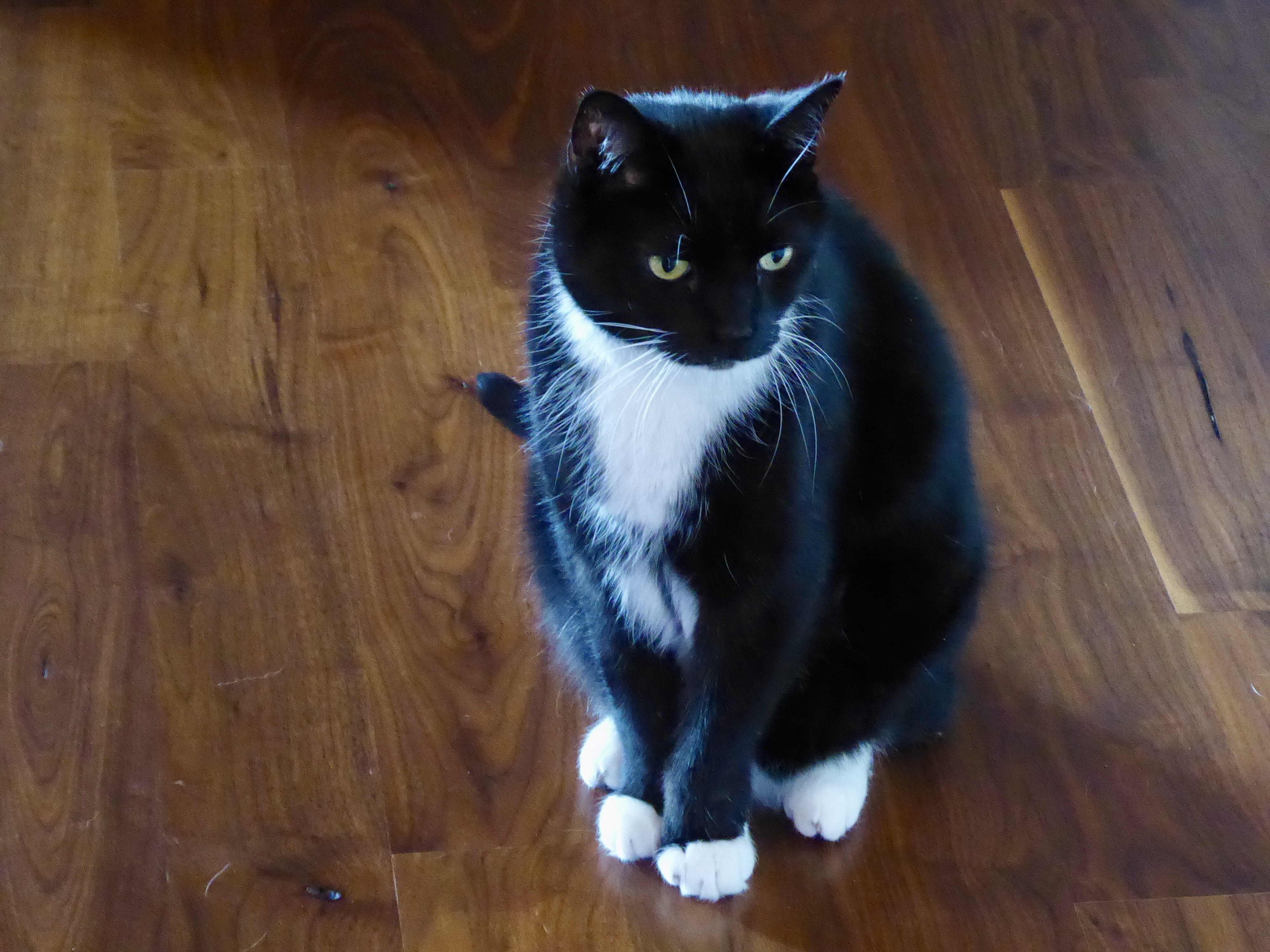 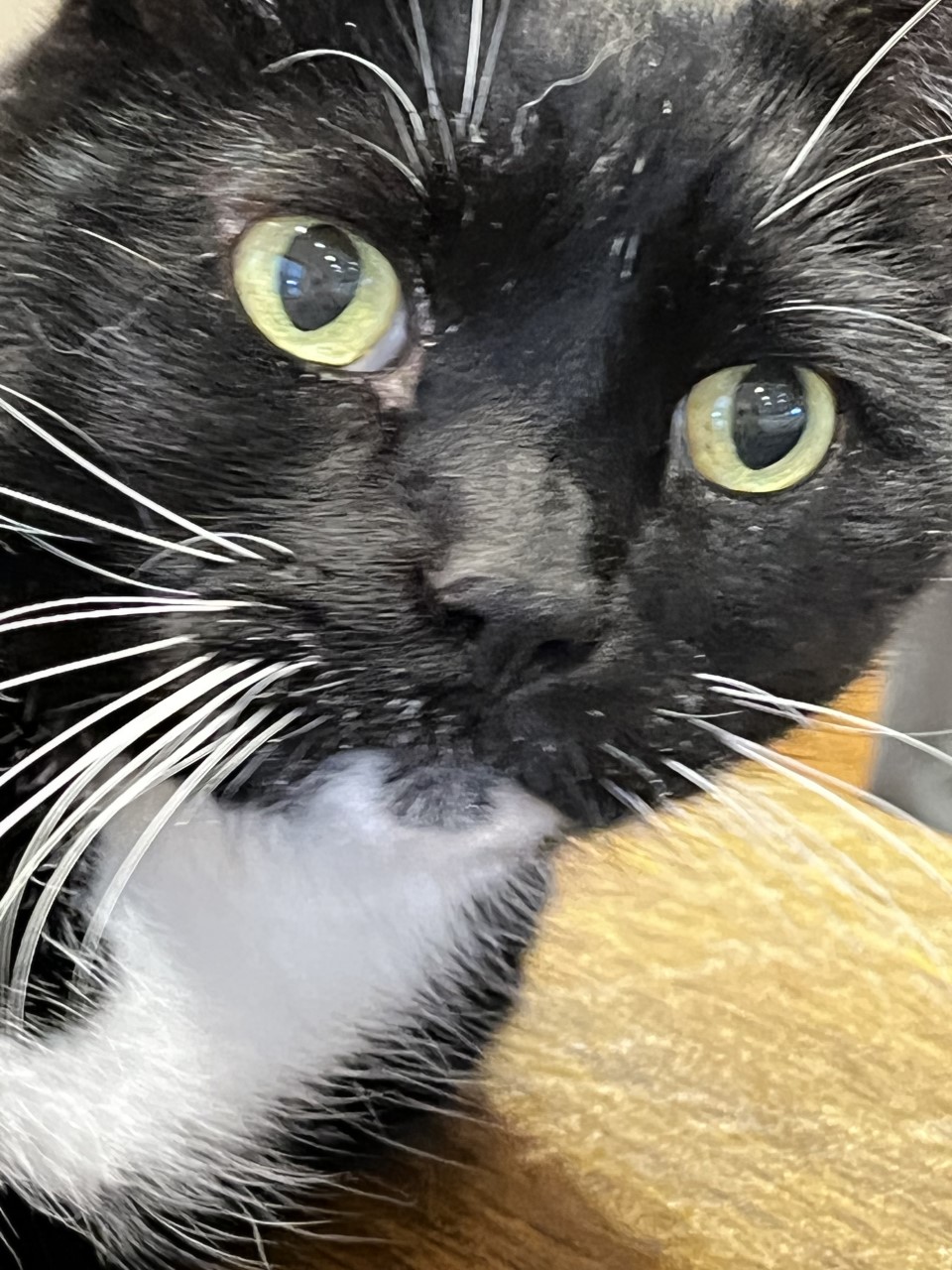 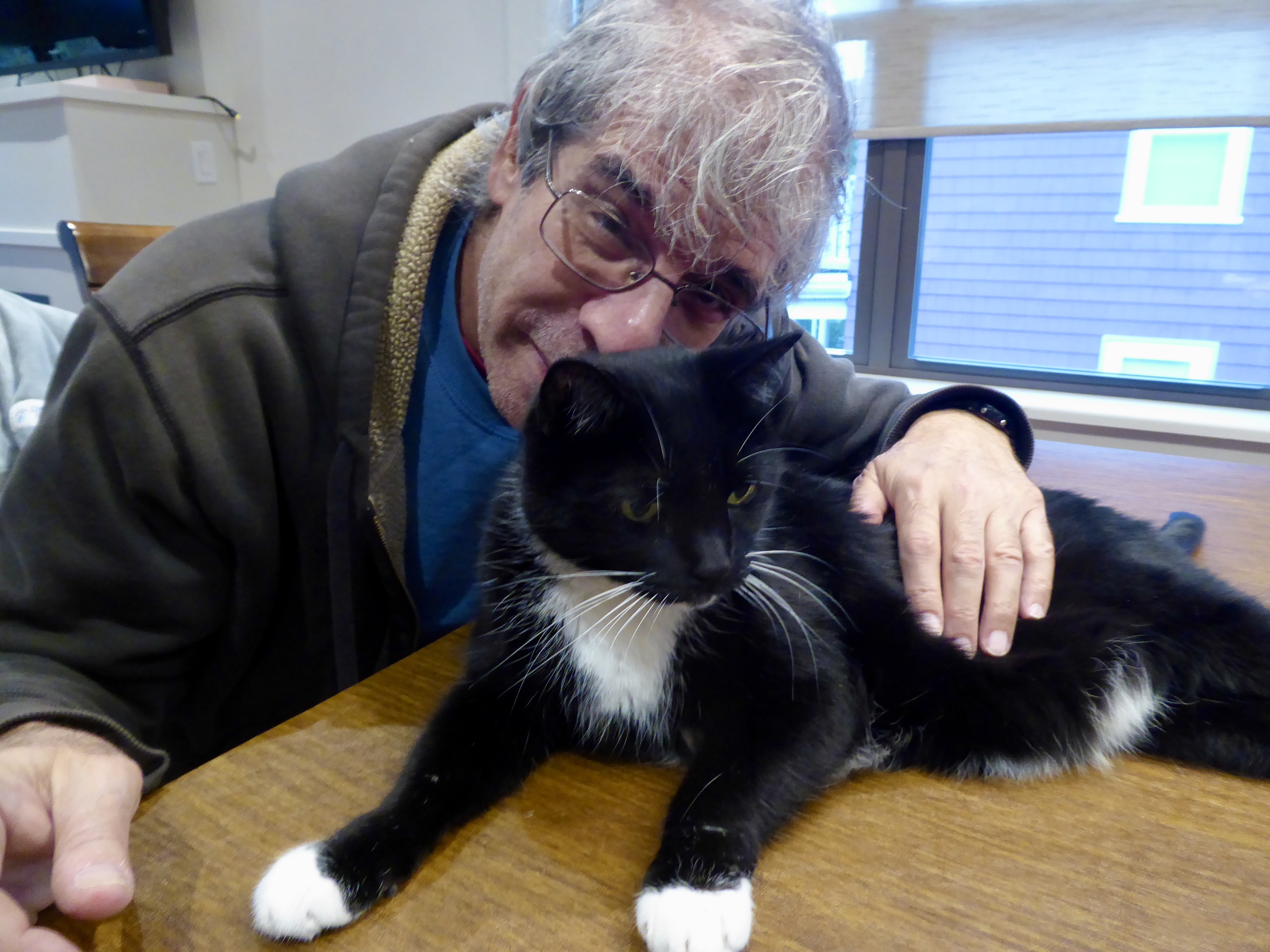 A bracing walk around nearby Jamaica Pond, a kettle lake indicating the retreat of glaciers.

A kettle (also known as a kettle lake, kettle hole, or pothole) is a depression/hole in an outwash plain formed by retreating glaciers or draining floodwaters. The kettles are formed as a result of blocks of dead ice left behind by retreating glaciers, which become surrounded by sediment deposited by meltwater streams as there is increased friction.[1] The ice becomes buried in the sediment and when the ice melts, a depression is left called a kettle hole, creating a dimpled appearance on the outwash plain. Lakes often fill these kettles; these are called kettle hole lakes.

There were mallards! (I do miss my ducks.) 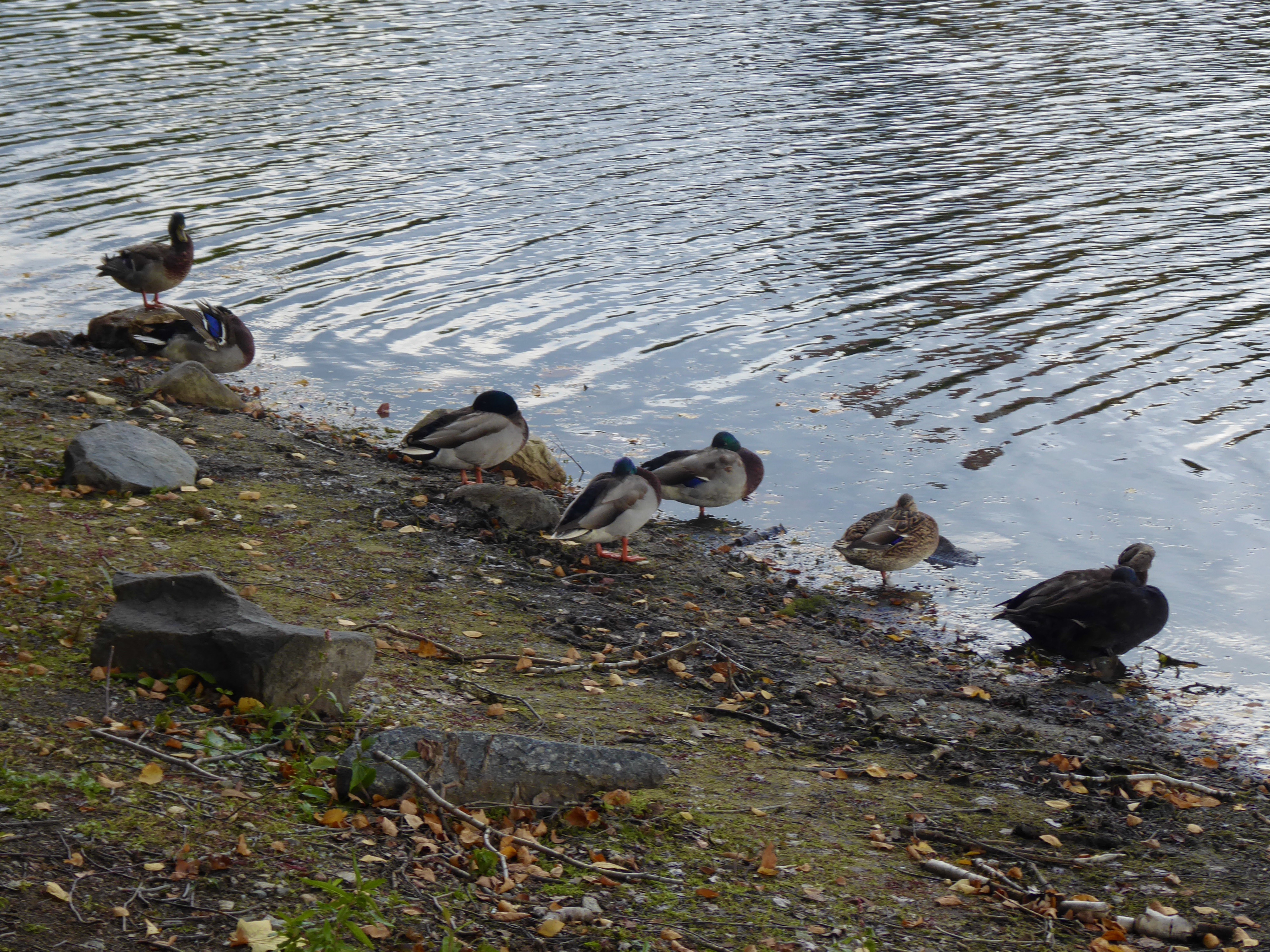 And what I think are cormorants festooning a boat in the pond. I’m not sure of the ID, however, so readers are welcome to tell us what they are: 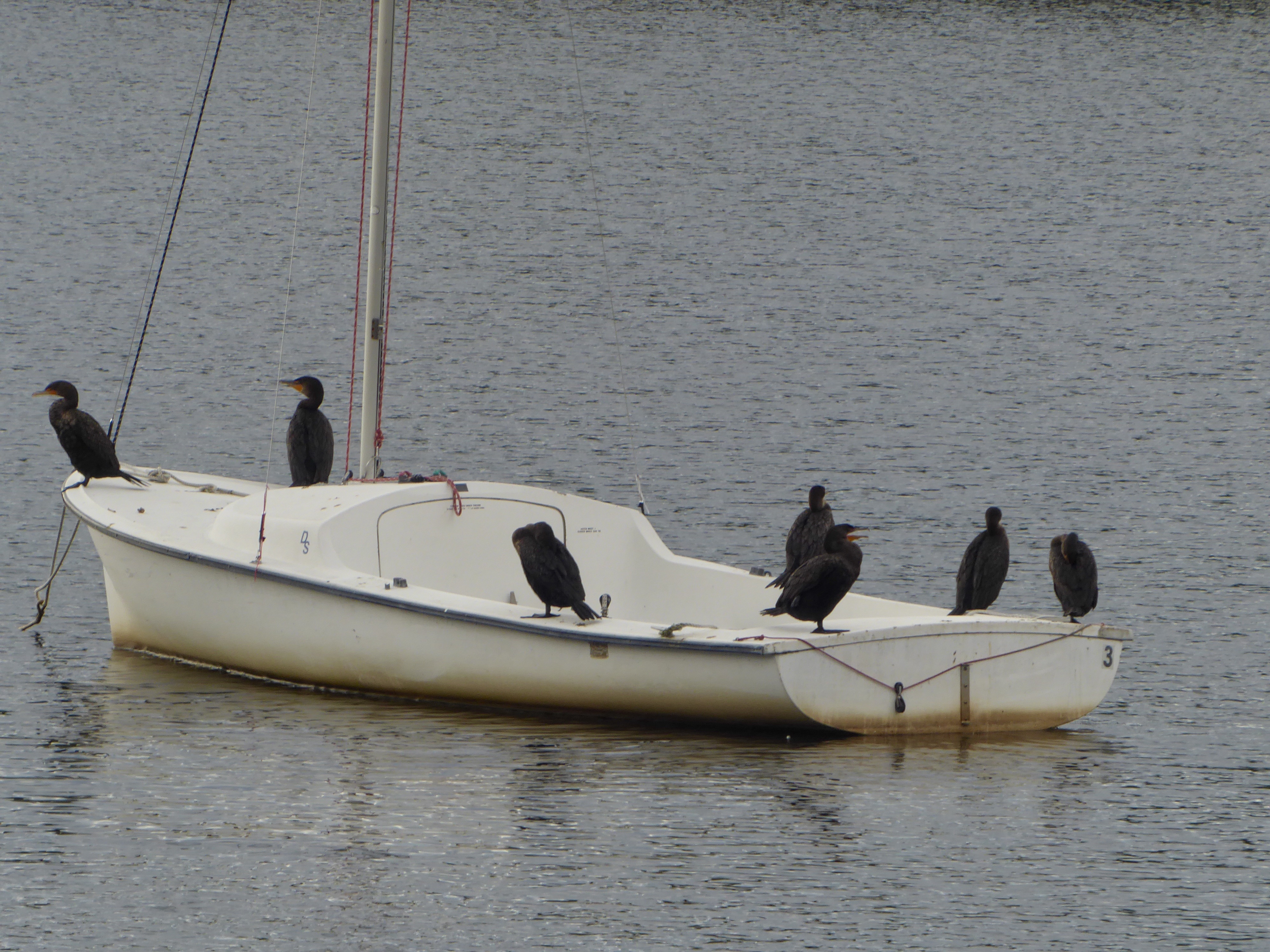 The Pond, and Jamaica Plain in general, is studded with gorgeous houses. Here are two: 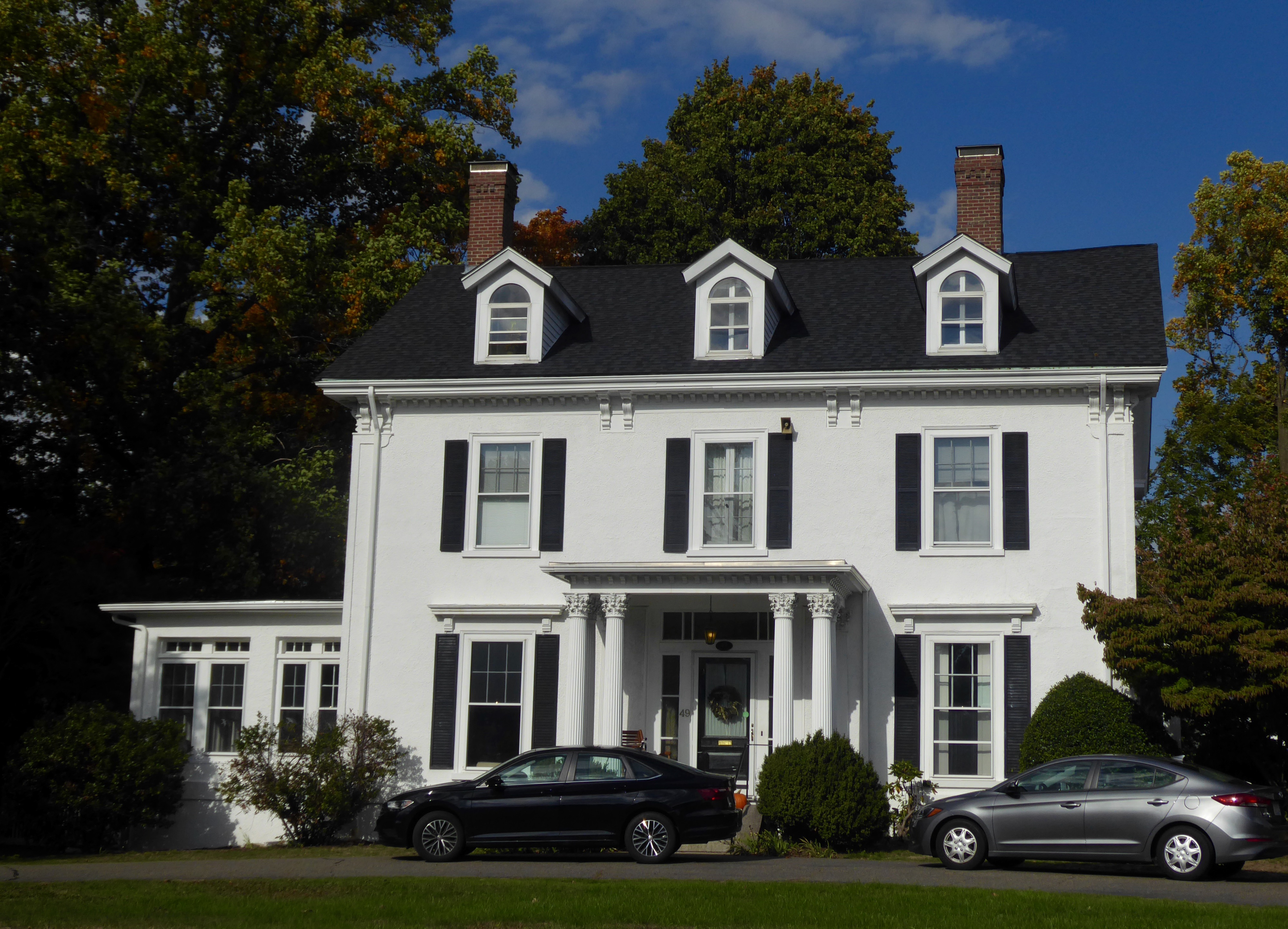 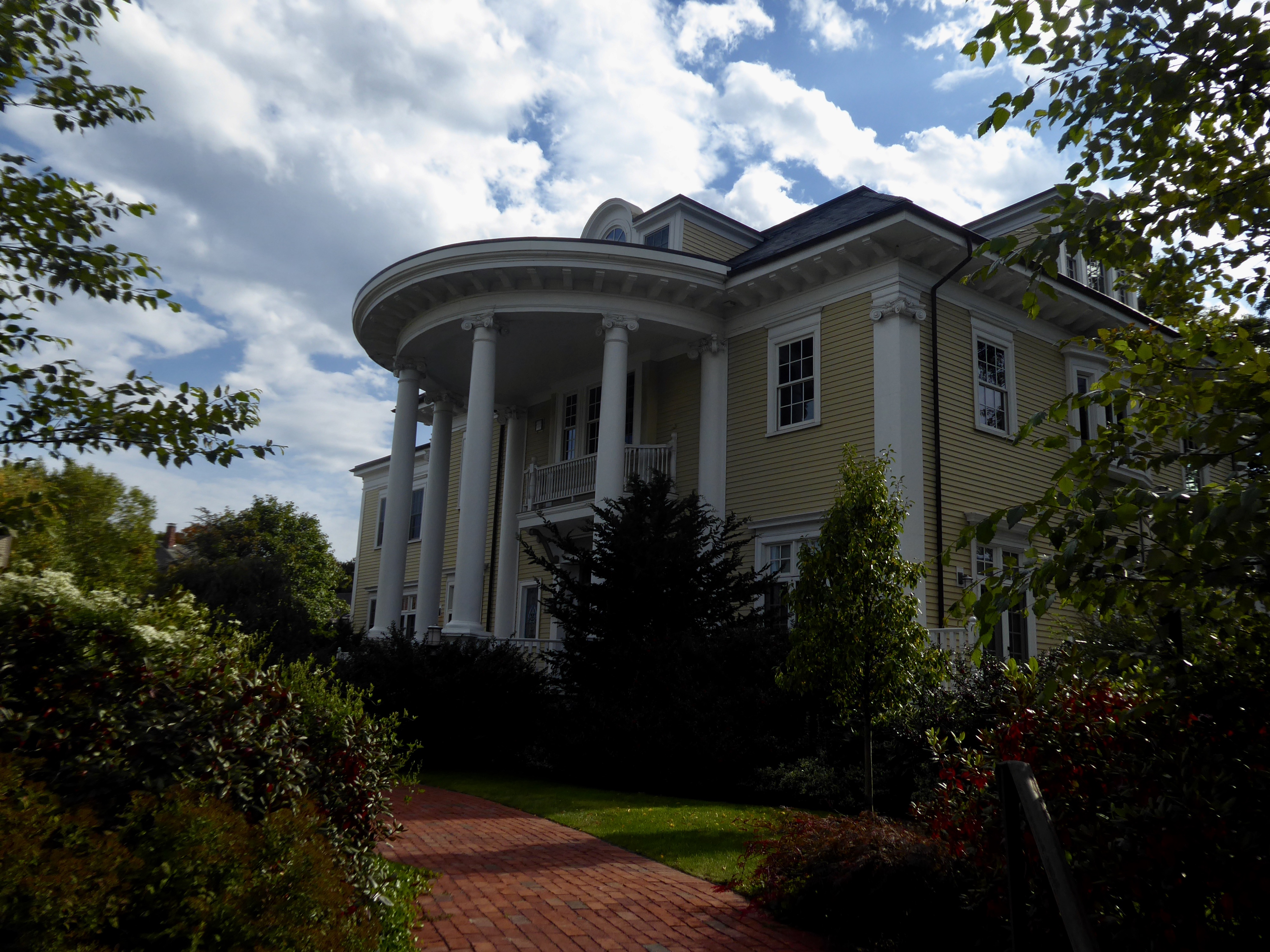 After a homecooked meal (unfortunately not photographed), we hied ourselves to the best ice cream emporium in Cambridge, and perhaps in the world (I haven’t tried them all): Christina’s Homemade Ice Cream in Inman Square in Cambridge. The flavors are many, all are made with the finest ingredients, and there are some exotic choices: 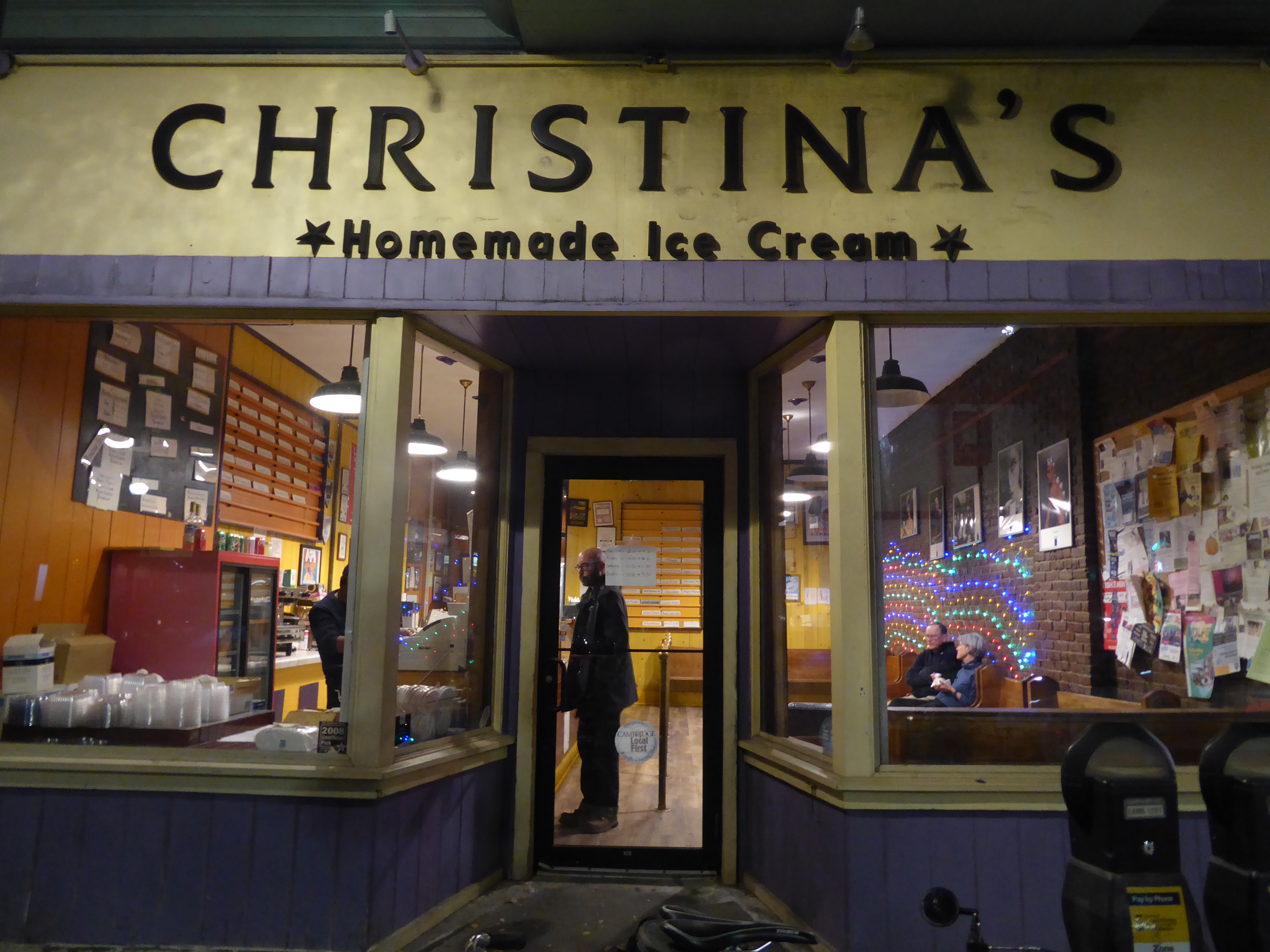 Here were the choices last night (click to enlarge): 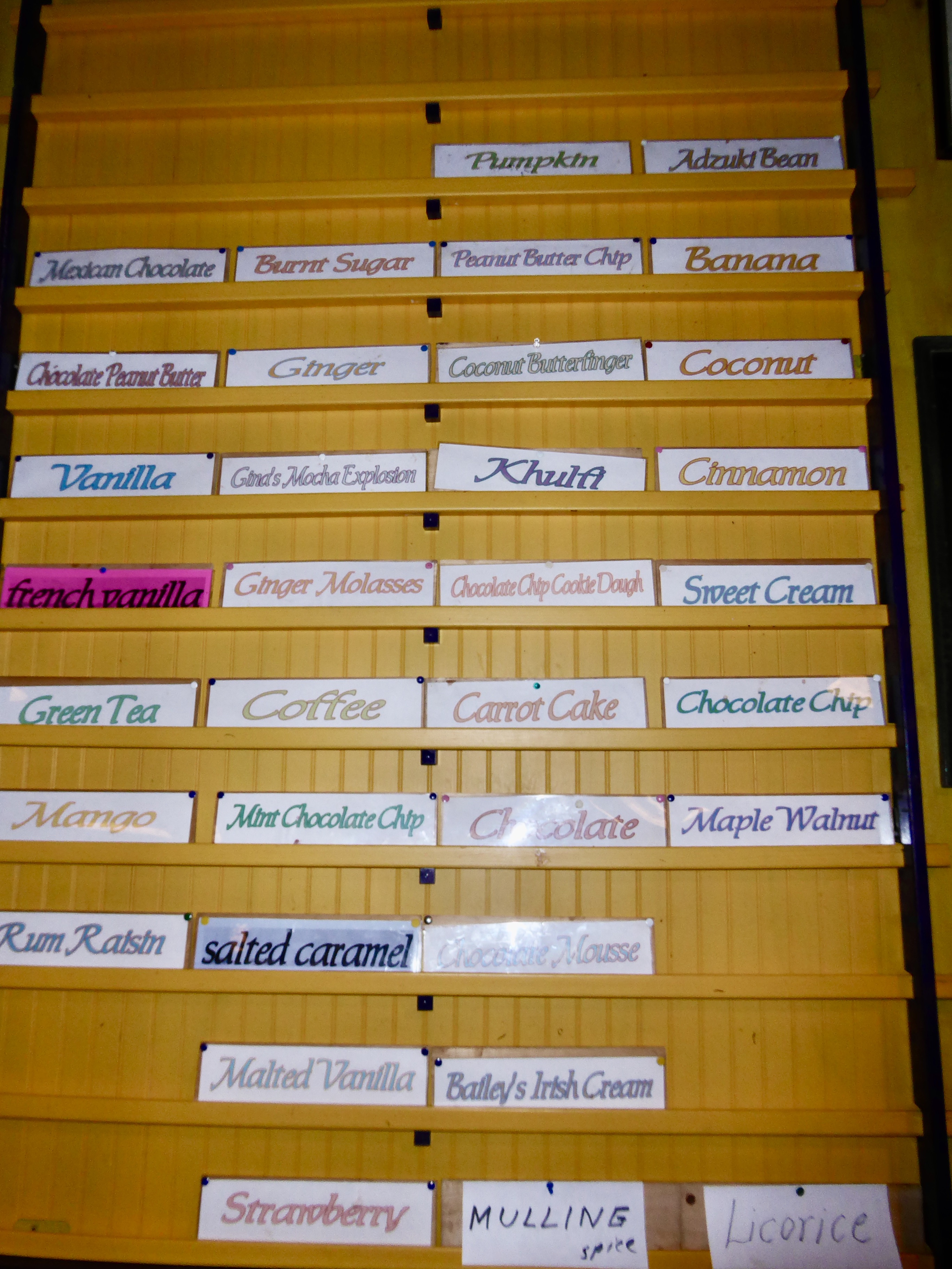 Although the “burnt sugar” flavor is, I maintain, the finest flavor of ice cream in the world, I always get it when I’m there, and so this time chose two new flavors: “khulfi”, an Indian ice cream with cardamom flavoring, and carrot cake, a splendid flavor that tasted just like its namesake, complete with raisins and a ribbon of cream cheese as frosting. My two scoops (carrot cake on the right): 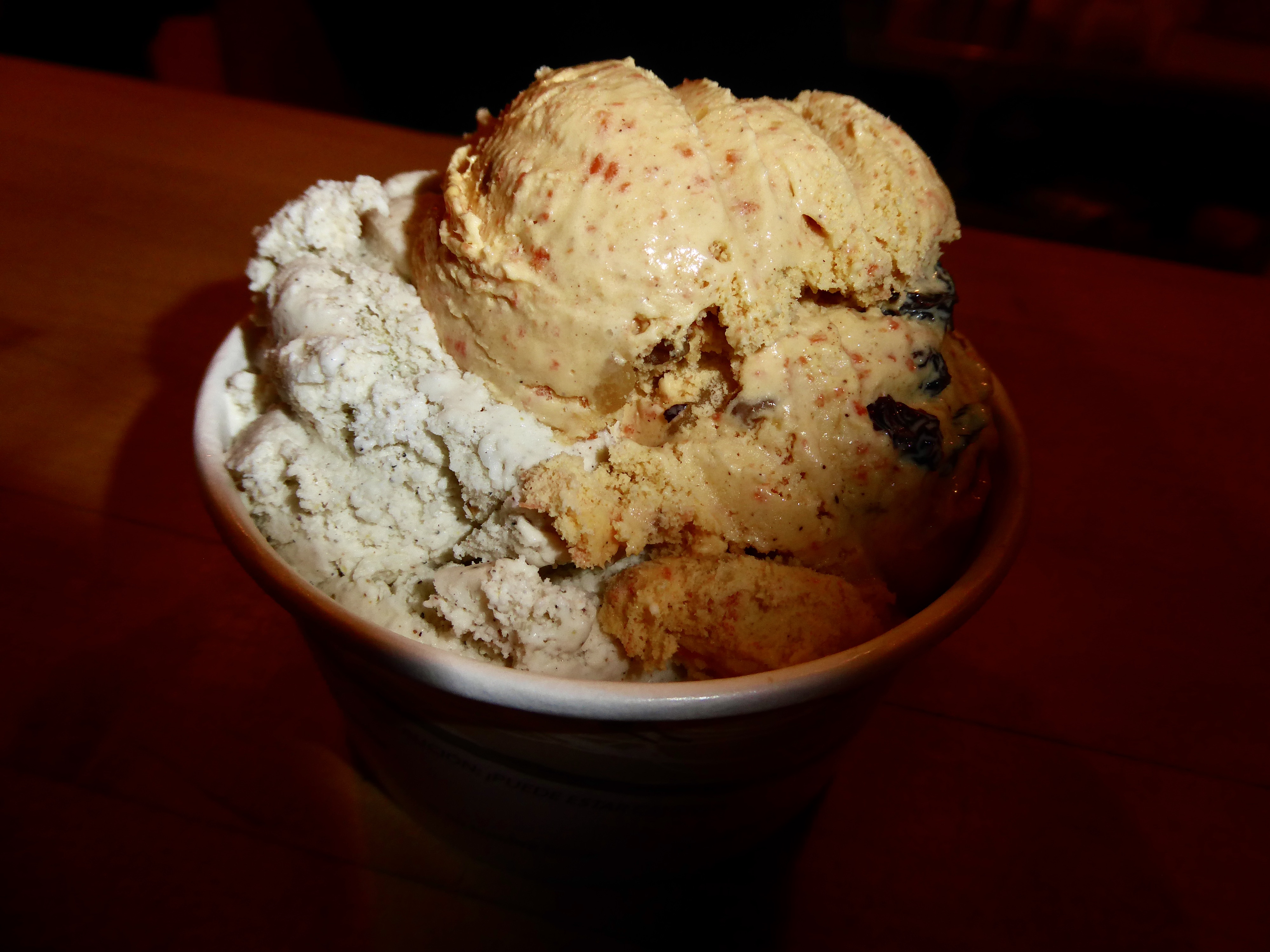 And two children’s appreciation for the place. If you are ever in Cambridge, you must not miss Christina’s, and get the burnt sugar flavor. Tell them that Jerry sent you (they won’t know who I am): 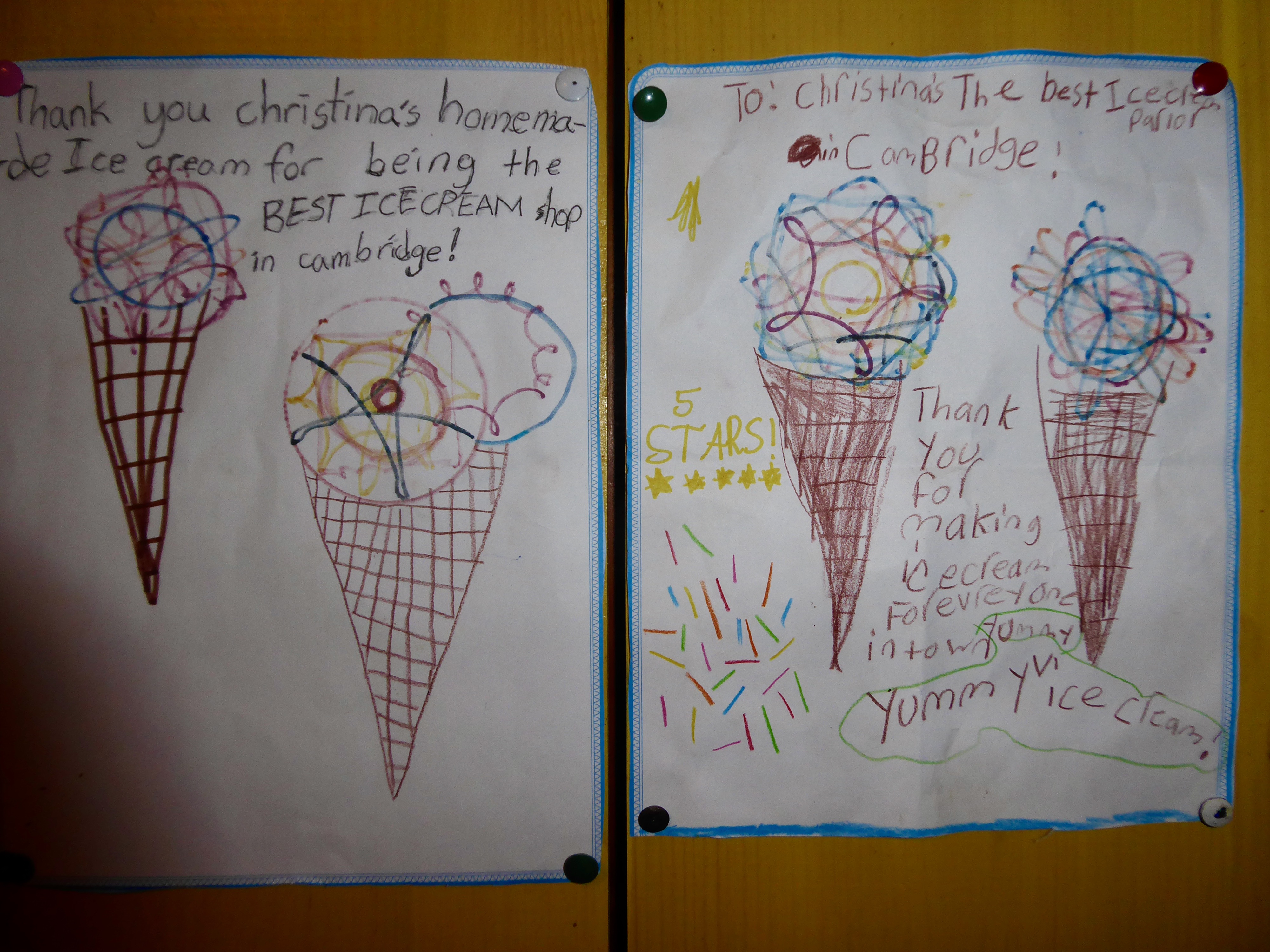